Kelp, Good For You And The Environment - 27 East

Kelp, Good For You And The Environment 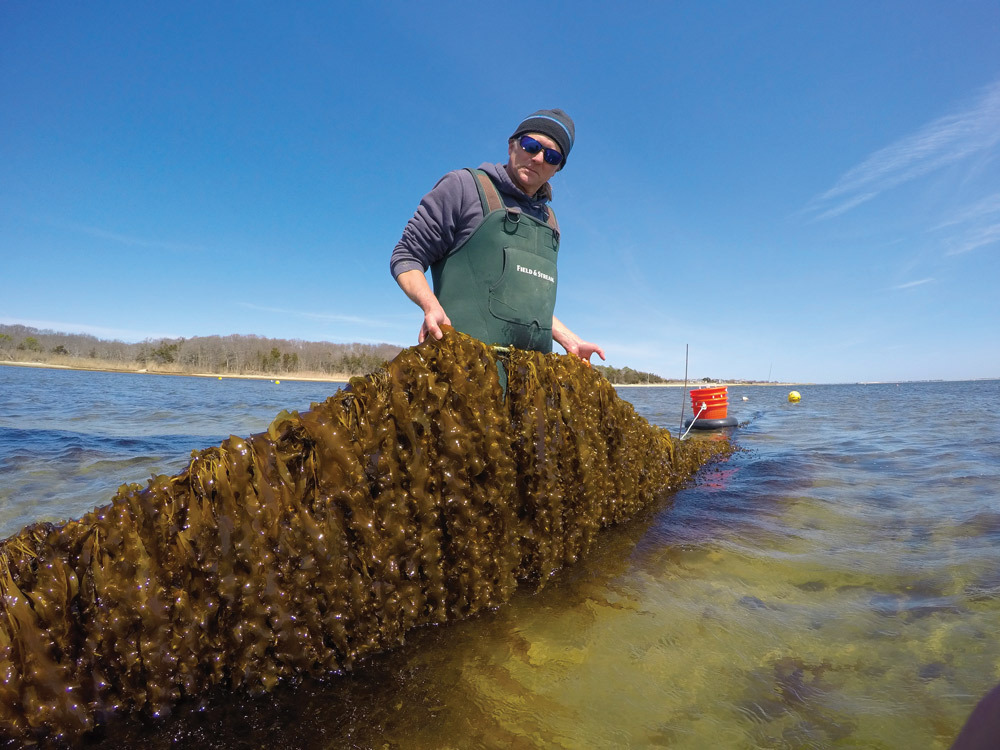 Mike Doall tending to the kelp farm in Southampton. 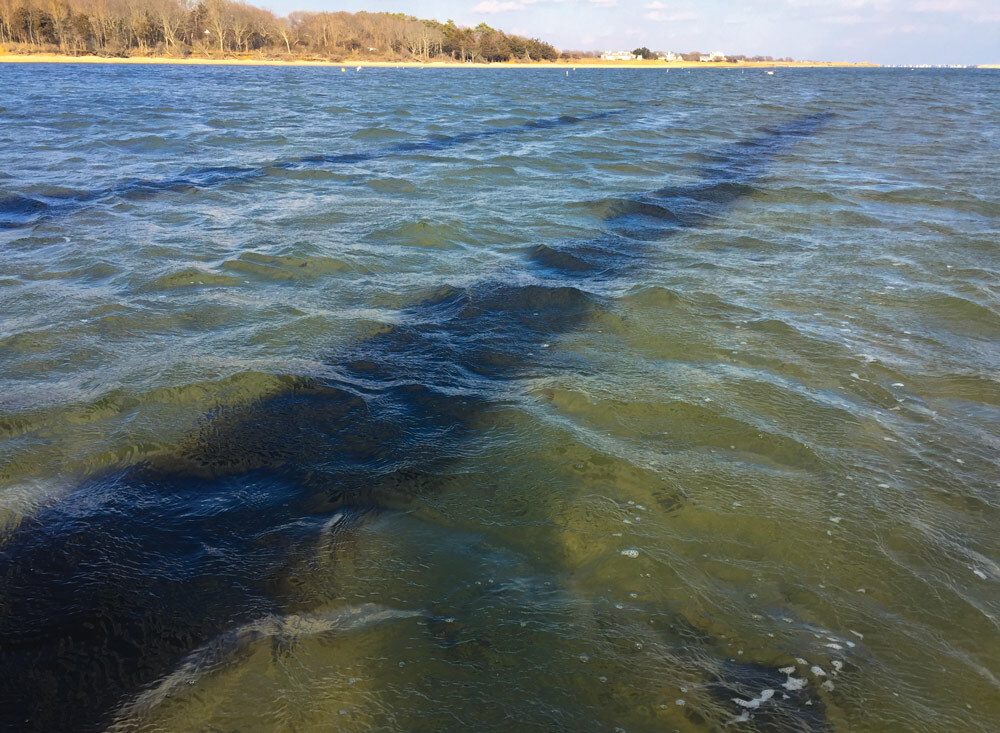 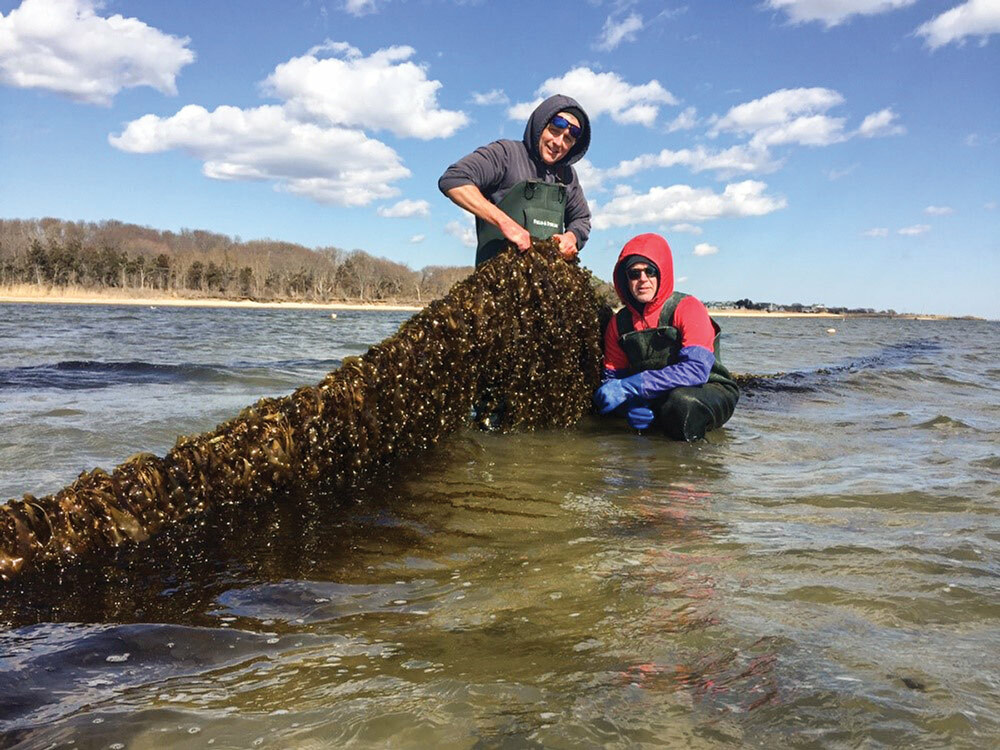 Some dreams start small. One doubts the first farmer of kale, that now-ubiquitous leafy green, expected the eventual fanfare the crop received. Whether or not we are on the brink of a culinary revolution with sugar kelp — the newest farmed green to arrive on Long Island’s East End — remains to be seen, but it’s starting to look that way.

Last winter, several marine scientists from Stony Brook University collaborated with three-dimensional farming — a model to harvest bounty from the sea — pioneers GreenWave and seafood purveyors Dock to Dish and Haskell Seafood to implement a sugar kelp growing and harvesting program. The crop, which scientists view as revolutionary, has never before been grown on Long Island, but due to nitrogen-rich waters, the kelp has thrived.

Michael Doall, a marine restoration and aquaculture specialist at Stony Brook University’s School of Marine and Atmospheric Sciences, was not always a sugar kelp enthusiast. Before his foray into kelp farming and research, Mr. Doall spent 30 years working as a research specialist for Stony Brook, with a focus on shellfish and bivalve restoration. In 2009, he started an oyster farm in Montauk, from which the famed Montauk Pearl was born. That side business became a full-time job, until 2017, when Mr. Doall sold off his share of the company, returning to Stony Brook.

Oyster farming had proven eye-opening, however, and a 2013 trip to Maine led Mr. Doall to sugar kelp. “I found that kelp is a winter crop,” he said. “It’s a cold-water crop. Oysters are a warmer crop. That’s when most of the labor occurs. And then, in the winter, things slow down. The oysters aren’t growing anymore. On our oyster farm, we had seasonal employees, but we didn’t need them in the winter. You can divert your labor, your resources from oysters in the warmer months, to kelp in the winter months.”

Back at Stony Brook, Professor Christopher Gobler was already in the middle of a study, where he was growing seaweed to quantify the impact of seawater acidification on marine life. Mr. Doall’s piqued interest, combined with Prof. Gobler’s United States Department of Agriculture-funded study, resulted in the investment in what is referred to as three-dimensional farming.

Where traditional farming has the limit of space, in that one crop replaces the next, those limits are untrue in water. On the same column of ocean, a farmer can grow both oysters and kelp. “There are synergies between seaweeds and shellfish,” Mr. Doall said. “I recognized the restorative benefits of seaweed aquaculture.”

Prof. Gobler said kelp can remedy some of the oceanic problems posed by climate change. Kelp provides oxygen, for instance, and in oxygen-depleted areas, which experience massive fish kills, the presence of kelp can supply this necessary element. Kelp also removes nitrogen and carbon dioxide, two elements responsible for ocean acidification. “With the increase of carbon dioxide in our atmosphere due to things like consumption of fossil fuels, there has been a buildup in carbon dioxide in the atmosphere and the oceans,” Prof. Gobler said.

That buildup can slow the growth of marine animals, like shellfish, disturbing a fragile ecosystem. “The kelp is addressing [an] ocean-specific environmental problem,” he added.

The interest in kelp is not purely scientific. In collaborating with Dock to Dish and Haskell’s Seafood, Mr. Doall and Prof. Gobler have sought to reimagine current food sources on Eastern Long Island. Sean Barrett, who founded Dock to Dish in 2012, sees integration as his inevitable goal. “The U.S. is way behind other parts of the world with kelp in the culinary space,” he said. “I think that’s a larger part of the culinary culture in the U.S. per capita, we average about 14 pounds of seafood a year per person, as opposed to Korea, which is in the hundreds.” Mr. Barrett believes that there’s room to broaden the category of what is thought of as seafood.

The fruits of their labor are starting to pay off. This year’s harvest was successful, and executed in extremely shallow water, with some depths reaching no more than 2 feet. Harvested kelp is processed, flash-frozen, and vacuum-sealed. The processing takes place at Haskell’s Seafood in Quogue. “We take off the parts that don’t look good and that we don’t eat,” Mr. Doall said. “It gets quickly blanched at 180 degrees. Kelp is brown when it grows, but when you blanch it, it turns this bright green color.”

Currently, New York City’s Gramercy Tavern, under chef Michael Anthony, is serving a kelp salad, while Brooks Headley’s “accidentally vegan” Williamsburg burger joint, Superiority Burger, is serving a barbecue kelp slaw. The crop is so popular that it is currently sold out, although, Sean Barrett said, East Hampton’s Nick & Toni’s is “openly inviting us to start bringing kelp. [They] will be at the very top of the list when the next crop comes through.” The next crop will be harvested this winter.

Kelp farming is based on a sustainable agriculture model. It aims to solve a series of problems, one of which is monoculture, a dangerous game of risk for farmers, whereby one crop is grown — and depended on. “Everybody on Long Island is growing oysters,” Mr. Doall said. “All the eggs are in one basket. If there’s ever an oyster-specific disease around the world, it’s wiped out.”

As with kale, there is evidence to support that kelp is extremely beneficial from a nutritional standpoint. “It’s highly enriched with lots of nutrients,” Prof. Gobler said. “It’s a good source of iodine, as well as vitamins and cofactors. It has a similar nutritional profile to things like leafy greens.” Unlike leafy greens, however, kelp requires none of the resources — no labor for weeding, no irrigation, fertilizer or physical space.

Is kelp the new kale? Perhaps someday it will rise to similar heights of popularity. In the meantime, edible, delicious kelp — the result of smart science and ecological consciousness — offers more than just what’s on your plate. “You’re not going to combat global ocean acidification with one kelp farm,” Prof. Gobler said, “but kelp farms can likely improve the local water quality.” Can your kale salad do that?