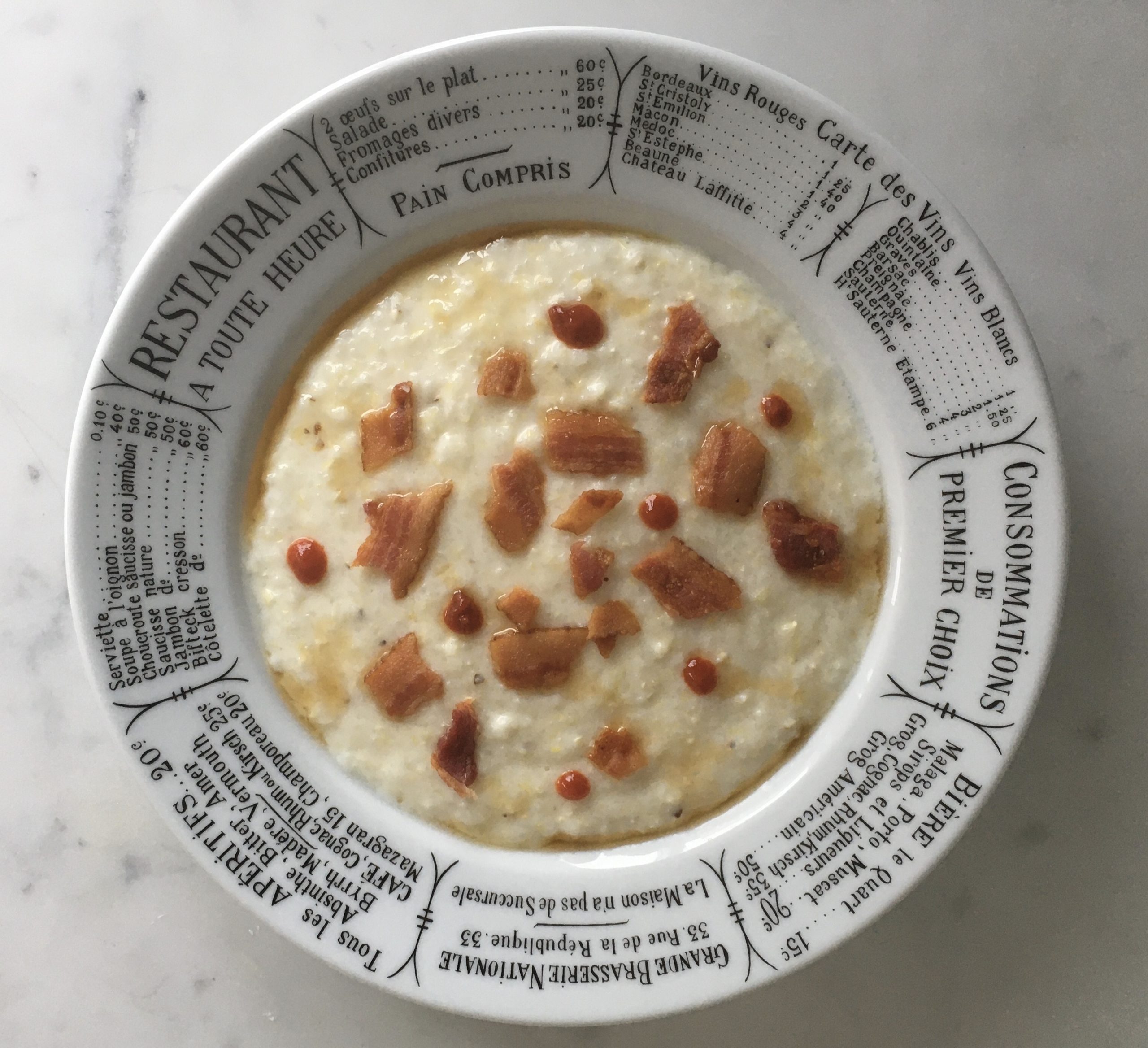 Last week I made the most decadent, calorie-laden weeknight dinner in my repertoire. My pot of shrimp and grits contained half a cup of heavy cream, four ounces of cheddar cheese, and a tablespoon of butter. And it served just two of us. On the bright side, I told my husband, our grits were whole grain, organic, and 100 percent gluten free!

It’s February, and I’m in full hibernation mode, huddling at home by my fireplace and venturing out only for provisions to fatten myself up until spring. I’m craving pork belly, fettucine Alfredo, and molten chocolate cake. Whole grains are fine, as long as they are enriched with eggs, sprinkled with bacon, and garnished with cheese, preferably all at once.

That’s why I turn to grits in the winter. Mediterranean whole grains like farro, freekeh, and bulgur call out for olive oil, lemon juice, and raw vegetables including tomatoes and cucumbers. Perfect in the summer, when you want to eat lightly and use herbs and produce from your garden. In contrast, grits, which are served hot and beg for dairy fat and lard, are stick-to-the-ribs, winter fare.

Cornmeal mush is an ancient comfort food. Centuries before Europeans arrived on this continent, Native Americans ground dried corn kernels by hand with a mortar and pestle. Preserved this way, corn could be rehydrated to make porridge during the colder months. When colonists arrived, they quickly built grain mills and adapted them to grind corn as well as wheat. Initially, the British viewed cornmeal as inferior to wheat. George Washington owned a very profitable grain mill at Mount Vernon, where wheat flour was ground for export and corn was ground to feed the master’s livestock and his slaves.

Today, Southerners claim grits as a regional food, pointing to a recipe enjoyed by the Muskogee tribe of the southeastern woodlands as its antecedent, and crediting Africans’ and African Americans’ labor and creativity for transforming the most common ration of enslaved people into a special occasion dish served at high end restaurants from New Orleans to Atlanta. But Long Islanders can also stake a small claim. Grits are similar to samp, boiled cornmeal prepared by the Shinnecock, who introduced it to English settlers when they arrived on the East End.

Grits come in several forms. Regular and quick-cooking grits have been milled and then sifted to remove the fibrous hull and mineral-rich germ of each corn kernel. When corn is soaked in lime or lye to remove the hull and germ, it is referred to as “hominy.” Stone-ground grits are made by coarsely grinding kernels between millstones. Minimally processed so they still contain hull and germ, they are more nutritious than regular or quick-cooking varieties. They also take longer to cook, 30 to 45 minutes on top of the stove. They have a pleasantly chewy texture and rich corn flavor. Look for them at natural foods stores and in the natural foods aisle of the supermarket. Bob’s Red Mill sells them. I bought my stone-ground white corn grits at Trader Joe’s.

My husband declared my shrimp and grits delicious, but too rich to eat on a weekly basis. I respect his desire to stick to a heart-healthy diet. In order to spare him any temptation, I waited until he left the house and then I made a bowl of creamy grits for myself. This time, I topped it with some crumbled bacon, and a drizzle of maple syrup. A few drops of hot sauce enlivened the combination. Here’s the recipe:

Maple or sorghum syrup for drizzling

1. Bring the water and salt to a boil in a small saucepan. Whisk in the grits, lower the heat to a simmer, cover, and cook, whisking frequently, until most of the water is absorbed, 15 to 20 minutes.

2. Whisk in the cream, cover, and continue to cook, whisking, until most of the cream has been absorbed, 10 to 15 minutes. Stir in the cheese until melted.

3. Spoon the grits into a shallow bowl. Sprinkle with crumbled bacon. Drizzle with maple syrup and hot sauce to taste. Serve immediately.