Legendary Chef Lidia Bastianich Weighs In On The Power Of Local 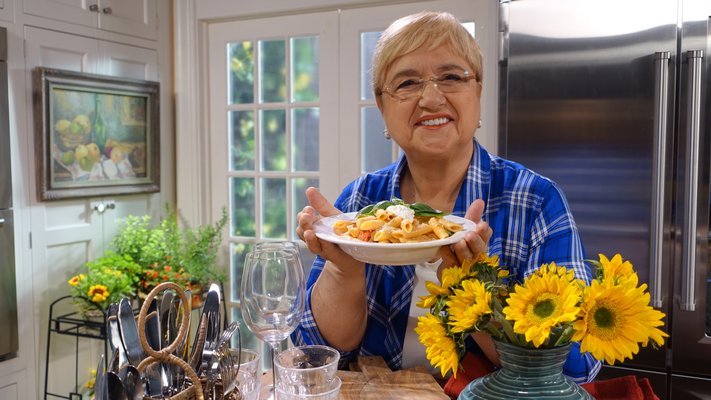 Celebrity chef Lidia Bastianich on the set of her cooking show. 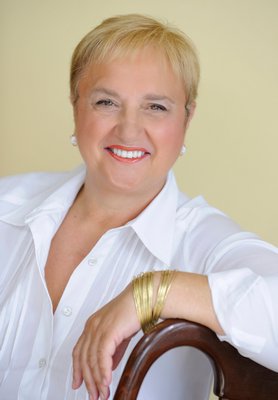 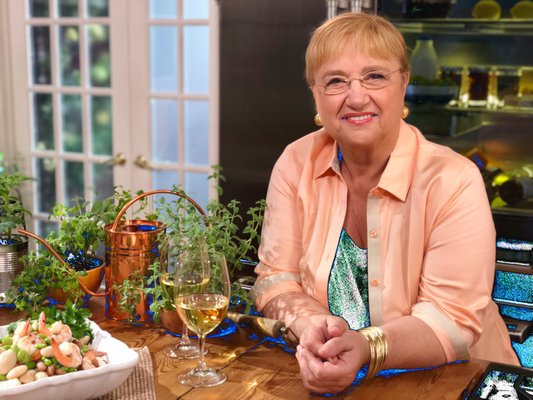 Lidia Bastianich on set the set of her television show. 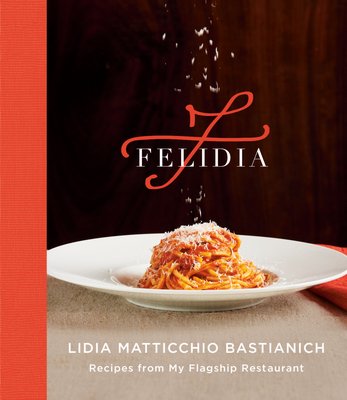 The cover of Lidia Bastianich's new cookbook, "Felidia," which will be released in late October. 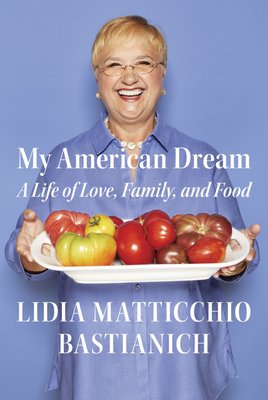 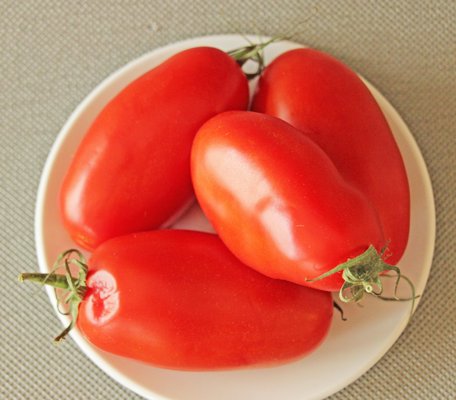 In the high-profile world of celebrity chefs, few have more name recognition than Lidia Bastianich, the woman who almost single-handedly redefined American palates when it comes to what Italian cuisine is, and should be, in this country.

The breadth of her knowledge and passion as it relates to Italy‚Äôs food traditions through its various regions can‚Äôt be underestimated, as her take on the cuisine virtually revolutionized the idea of what we mean when we say ‚ÄúItalian cooking.‚Äù

Bastianich is an Emmy award-winning public television host, cookbook author and a restaurateur with three acclaimed New York City restaurants ‚Äî Felidia, Becco and Del Posto. She was also among those responsible for bringing Oscar Farinetti‚Äôs Torino-based artisanal food and wine marketplace, Eataly, to New York‚Äôs Flatiron District. She now has restaurants and Eataly locations throughout the United States.

It‚Äôs a topic near and dear to Bastianich‚Äôs heart, as the notion of food and locale were extremely powerful influences in her early life. Her role as head of a present-day food empire stands in stark contrast to her modest roots, which began with her birth in 1947 in the city of Pula on the Istrian peninsula in present-day Croatia. Born in what was then part of Italy, in the aftermath of World War II Istria was soon transferred to the Federal People‚Äôs Republic of Yugoslavia.

It was a turbulent time for the region and Bastianich‚Äôs family.

‚ÄúIstria was Italy and given to the communists when I was young. We remained behind the iron curtain at the time it went up,‚Äù she said in a recent phone interview. ‚ÄúThings weren‚Äôt so bright then ‚Äî even food was hard to come by.‚Äù

But it could have been far worse.

While her parents remained in Pula where life was a struggle, both physically and politically, a young Bastianich was sent to live in the countryside on her grandmother‚Äôs farm. So, it was rural life that informed her first memories and much of the food philosophy which she embraces to this day.

‚ÄúI was the helper with the animals. We had chickens, ducks, rabbits, goats, pigs, a little of each,‚Äù recalled Bastianich who noted that, unlike in the city, there was no shortage of food on the farm. ‚ÄúWe‚Äôd eat a rabbit one Sunday and something else the next. I used to milk the goats. In November, we‚Äôd slaughter the pigs and make blood sausage. I was also a runner and you can‚Äôt help but remember these things, like harvesting olives. When you‚Äôre at that formative age, everything remains imbedded, even more so in my case.‚Äù

But in 1956, Bastianich‚Äôs parents made the decision to flee the communist state. Her mother took Bastianich and her brother to purportedly visit a sick aunt on the other side of the border. Her father remained in Istria, as was required by law to ensure his family would return, and he did ‚Äî until he found a way to sneak over the border and join them.

‚ÄúWhen my father appeared over the border, that‚Äôs when I realized I wasn‚Äôt going to go back to that beautiful setting,‚Äù Bastianich recalled. ‚ÄúI didn‚Äôt say goodbye to my grandmother and my animals.

‚ÄúFrom then on, I continued with food and brought food with me. That‚Äôs why tradition is so important,‚Äù she added. ‚ÄúIt was even more important when I was given the blessed opportunity to come to the U.S. I was 12, in my new country I wanted to share my traditions with friends and neighbors. I think that food was my connecting link to a part of my life I was pulled out of.‚Äù

And it was in the U.S. where Bastianich discovered that Italian food was defined by a fairly narrow subset of earlier immigrants who set out to cook native cuisine without the benefit of the ingredients found in their native land.

‚ÄúCuisine is a result of climate, tradition and occupation of the area,‚Äù Bastianich said. ‚ÄúThe first influence here came at the end of the 1800s from Calabria, Sicily and Campania, the area where Naples is. The Italian American food really reflected those three regions.‚Äù

However, she adds the food products available in the United States in decades past were often very different from those found in Europe.

‚ÄúFor example,‚Äù said Bastianich, ‚Äútomatoes are a new world product, but Italians are great agronomers, the climate and the topography lends itself to having great production ‚Ä¶ the tomatoes are quite different there.‚Äù

That means American tomatoes behave very differently from their European brethren when used in recipes. Bastianich notes that while a typical tomato-based Sunday sauce in the United States cooks for upwards of three hours, in Italy, it‚Äôs a quick 45-minute process.

The difference? Those tomatoes.

‚ÄúIn Italy, they made sauce with summer tomatoes. But the tomatoes they made sauce with here were big, beefsteak tomatoes with lots of seeds and juice,‚Äù she explained. ‚ÄúThey were highly acidic with bitter seeds, hence the addition of sugar, and you had to cook them a long time to get them to concentrate.‚Äù

Bastianich‚Äôs own professional food career began in 1971 when she began working as a sous chef for an Italian American chef at his New York restaurant. Ten years later, she opened her first restaurant, Felidia, and continued to hone her skills and philosophy by presenting Americans with the full range of what Italy has to offer in terms of cuisine.

‚ÄúI decided I was going to cook the food from Italy ‚Äî that‚Äôs 20 regions, 20 ways of cooking pasta e fagioli,‚Äù she said. ‚ÄúThen the products began coming available, including Arborio rice. We didn‚Äôt have it at first. Once we did, then you could cook a good risotto.‚Äù

As more ingredients became widely available and American palates began to understand and desire the complexities inherent in Italian cooking, Bastianich grew her food business. Eventually she reached out to Oscar Farinetti, an advocate of the Slow Food movement who opened the original Eataly in Turin, Italy, back in 2007.

‚ÄúHe wanted to come to America and New York, so we decided to do a partnership. That was really the right transition to bring Italy to Americans who love it and were ready for real espresso and real gelato,‚Äù explained Bastianich. ‚ÄúWhat makes it, is the association of Oscar and Italy with the Slow Food movement. At the time, even Italy was kind of recapturing the traditional products being made and was afraid of losing them.

‚ÄúOscar got to know those traditional artisans and put them in the store, and now we have access to that and continue to do the traditional produce that the big chains can‚Äôt provide.‚Äù

The first Eataly on this side of the Atlantic opened its doors in the Flatiron district of New York City in 2010. For those not familiar with the concept, it functions like a large indoor piazza and food marketplace for all things Italian ‚Äî whether that be sampling a slice of mozzarella, indulging in a salami plate, diving into a big bowl of pasta, buying cookware and wine, or even take a cooking course, often taught by Bastianich herself.

Like riding the crest of a wave, Bastianich has been at the forward edge of a trend that has brought Americans of all ages back to the roots, so to speak, of authentic food sourced with real ingredients. That sourcing, of course, extends to the East End where Bastianich has a long history of visiting farmstands in search of the freshest products available.

‚ÄúIt‚Äôs so wonderful to see all the young farmers there now,‚Äù she said. ‚ÄúWe went out to the Long Island farmstands years ago, I was so happy out there and buying these things. That was a big trip for us ‚Äî the eggplants and the corn. We couldn‚Äôt understand why you couldn‚Äôt get the products in the store.‚Äù

Now, of course, things have changed and fresh food produced by a new generation of growers and purveyors is both expected and enjoyed by a wide swath of America.

And Bastianich? She continues to spread the word and her passion for the food of her native land.

‚ÄúDuring my growth, there were so may who mentored me and were willing to share their technique,‚Äù said Bastianich, who is Dean of La Scuola at Eataly, which means she helps build curriculum, oversees programming and teaches classes several times per year. ‚ÄúIt‚Äôs about giving back and teaching young chefs. Even if they don‚Äôt have a 100 percent Italian repertoire, everyone uses Italian products and recipes.‚Äù

Stony Brook Southampton‚Äôs fifth annual Food Lab Conference ‚ÄúCook, Eat, Drink: Taste the Terroir,‚Äù and is Friday and Saturday, September 13 and 14 at the Southampton campus. ‚ÄúThe Power of Local: Taste The Terroir,‚Äù Lidia Bastianich in conversation with Adam Gopnik, takes place at 11 a.m. on September 14 in Duke Lecture Hall. Tickets for the 2019 Food Lab Conference are $150 at TheFoodLab.org.

In addition, on October 29, her new cookbook ‚ÄúFelidia: Recipes from My Flagship Restaurant,‚Äù will be officially released. In it, Bastianich shares 115 recipes created with longtime executive chef Fortunato Nicotra, including many of her classic dishes.

Winter Brunch At Gurney‚Äôs Gurney‚Äôs Montauk has launched one of the hamlet‚Äôs first brunch options ... 18 Jan 2022 by Staff Writer

It‚Äôs January, so you know what that means. Time to realign those priorities and kick ... 11 Jan 2022 by Annette Hinkle

This week, the Highway Group announced its upcoming acquisition of the widely celebrated Wainscott bakery, Breadzilla. Located at 84 Wainscott NW Road, the spring 2022 relaunch will become the new home base for the group‚Äôs Autostrada Catering, which provides an array of bespoke offerings, from a mobile wood-fired pizza oven to large-scale wedding events. Through this next stage for both Autostrada Catering and Breadzilla, Highway Group strives to preserve the bakery‚Äôs prominent offerings and essential staff members. Longtime fans of the Wainscott fixture, the Highway Group team is also behind Highway Restaurant & Bar in East Hampton and Main Street ... 10 Jan 2022 by Staff Writer

There‚Äôs this recurring nightmare I had as a child where the McDonald‚Äôs ‚ÄúHamburglar,‚Äù staple of ... 3 Jan 2022 by Staff Writer

The holiday season has arrived with the new year right around the corner. This season, Claude‚Äôs Restaurant at the Southampton Inn is offering awe-inspiring throwback dinner theater shows to close out 2021. Claude‚Äôs has been transformed from a casual eatery to a location to enjoy a cabaret dinner and show, unlike anything else on the East End. With a few successful shows already in the books, Claude‚Äôs has plenty more offerings leading up to the new year. On New Year‚Äôs Eve, Friday, December 31, Claude‚Äôs will host special cabaret dinner and show featuring world-renowned award-winning singer Cristina Fontanelli. With her ... 20 Dec 2021 by Staff Writer

Noodle-Making Demo ‚Ä®At Sen Sag Harbor Ever wanted to learn to make your own noodles? ... 7 Dec 2021 by Staff Writer

It‚Äôs not exactly who you‚Äôd expect to find on the set of a buttoned up ... 19 Nov 2021 by Annette Hinkle