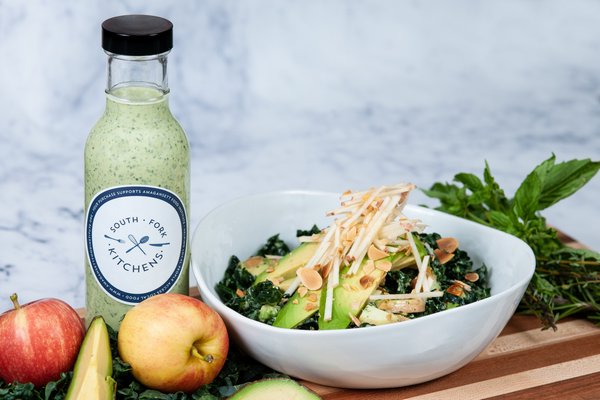 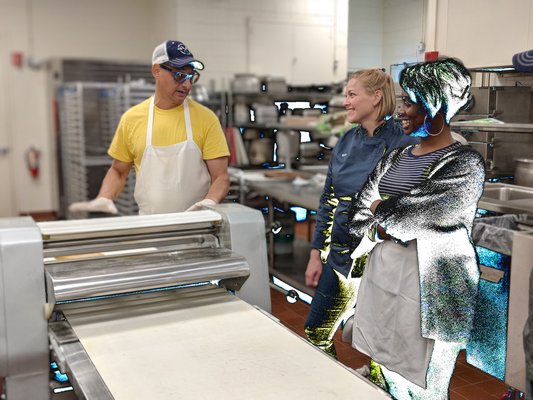 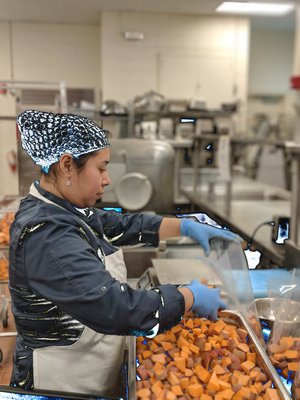 At work in South Fork Kitchens.

In June, the Amagansett Food Institute officially changed its name to the East End Food Institute, a change that is reflective of an expanding ethos. “The name change, for us, really made sense,” Kate Fullam, the institute’s executive director for the past year and a half, said. “I started at the organization in January of 2018, and from that point forward began to get questions about the name, as opposed to our geographic reach. The organization, in our original charter, was more to support and advocate for local food and local producers, so the provision was always broad.”Established in 2010 in Amagansett, the now-East End Food Institute is a 501(c)(3) nonprofit with the mission of promoting, advocating for, and supporting the farmers, producers, vintners, and providers of food and beverage products of Eastern Long Island. The four founding members, all Amagansett residents at the time, were John de Cuevas, who died in December 2018; Katie Baldwin and Amanda Merrow, founders of Amber Waves Farm; and Carissa Waechter, founder of Carissa’s The Bakery. Seven people sit on the board of directors, including Honest Man Restaurant Group partner Mark Smith, and six more are on the Advisory Board, including actor and Amagansett resident Alec Baldwin. The name change was the result of a formal vote among board members.

The nonprofit has numerous associated projects, including a farm apprentice matching program, a farmer-training program, and a farm-to-food pantry program. Until 2017, the institute partnered with Long Island Cares, collecting surplus produce from local farmers and distributing it to 600 food pantries throughout Long Island. The partnership was responsible for the redistribution of 120,000 pounds of produce. Beginning in 2018, the institute began partnering with The Balm Foundation, with the goal of vacuum sealing and freezing surplus produce so that food pantries would have fresh food regardless of the season.

The institute’s crown jewel, however, is its “South Fork Kitchens,” a program dedicated to helping small producers develop, package, and market their wares. Included in the South Fork Kitchens project is a café, located in the student center on the Stony Brook Southampton campus.

“Our café is a wonderful hidden secret,” Ms. Fullam said. “The menu changes every week based on a wholesale list from farms.”

Lunch is served Monday through Friday from 11 a.m. to 3 p.m. and highlights local purveyors. Some of the foods served, like Terry McGuire’s Homeslice Pizza, use the commissary space for production. Once a month, on Thursdays, Mr. McGuire lights the oven and prepares fresh pizzas outside the campus student center. Meals average about $10 apiece, not including drinks.

“We would love it if more people would come visit us for lunch,” Ms. Fullam said.

Access to the production kitchen is available for food and beverage producers alike. Purveyors who cannot afford their own commercial-grade kitchen can thereby use the facilities for large-scale production.

“Over the last 5 years, we’ve built our presence here at the Stony Brook Southampton campus, creating a food hub for the East End of Long Island,” Ms. Fullam said. The institute hopes to expand that presence further with help from a grant, which is currently in the application process.

“We take a lot of pride in keeping this kitchen active,” Ms. Fullam said. “It’s like a little showcase over here.”

To celebrate the renaming, and to kick off its expanding reach, the East End Food Institute hosted an open house at their South Fork Kitchens on Wednesday, June 26. Attendees were able to check out the commercial kitchen as well as the operational café and also got an insider look at the new collaborative project between the East End Food Institute and LocaLI Bred, a company offering subscription boxes filled with curated, locally sourced items.