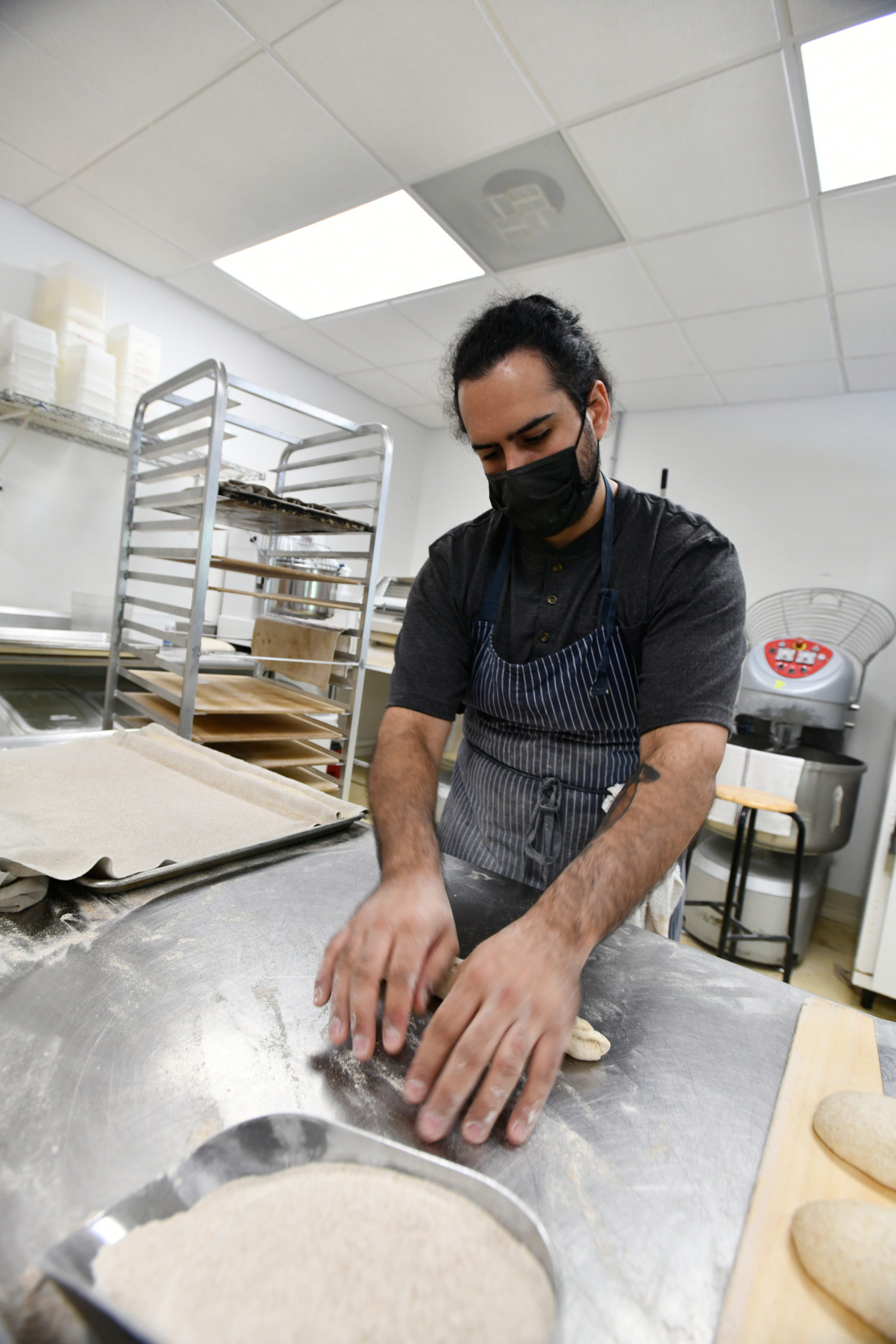 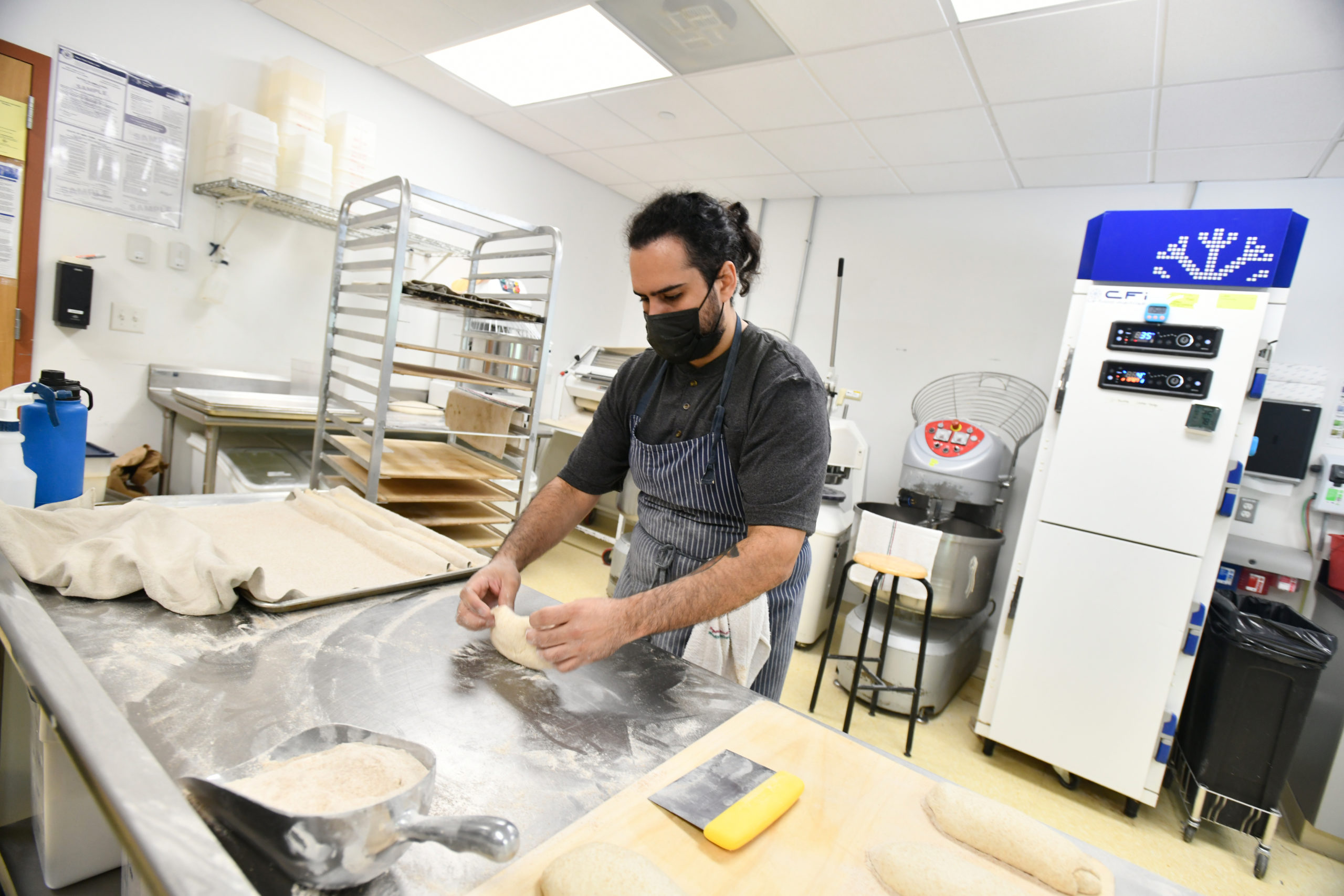 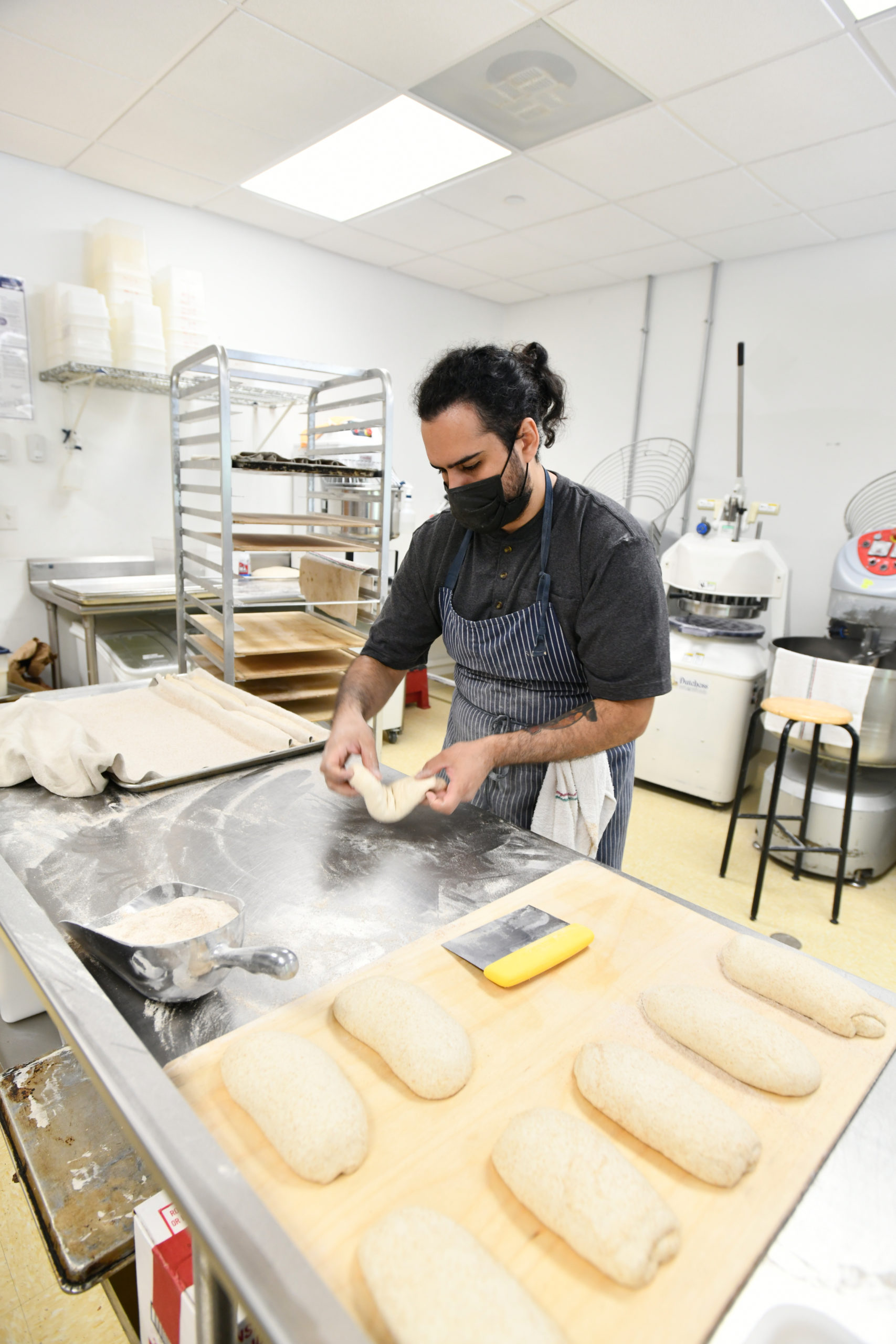 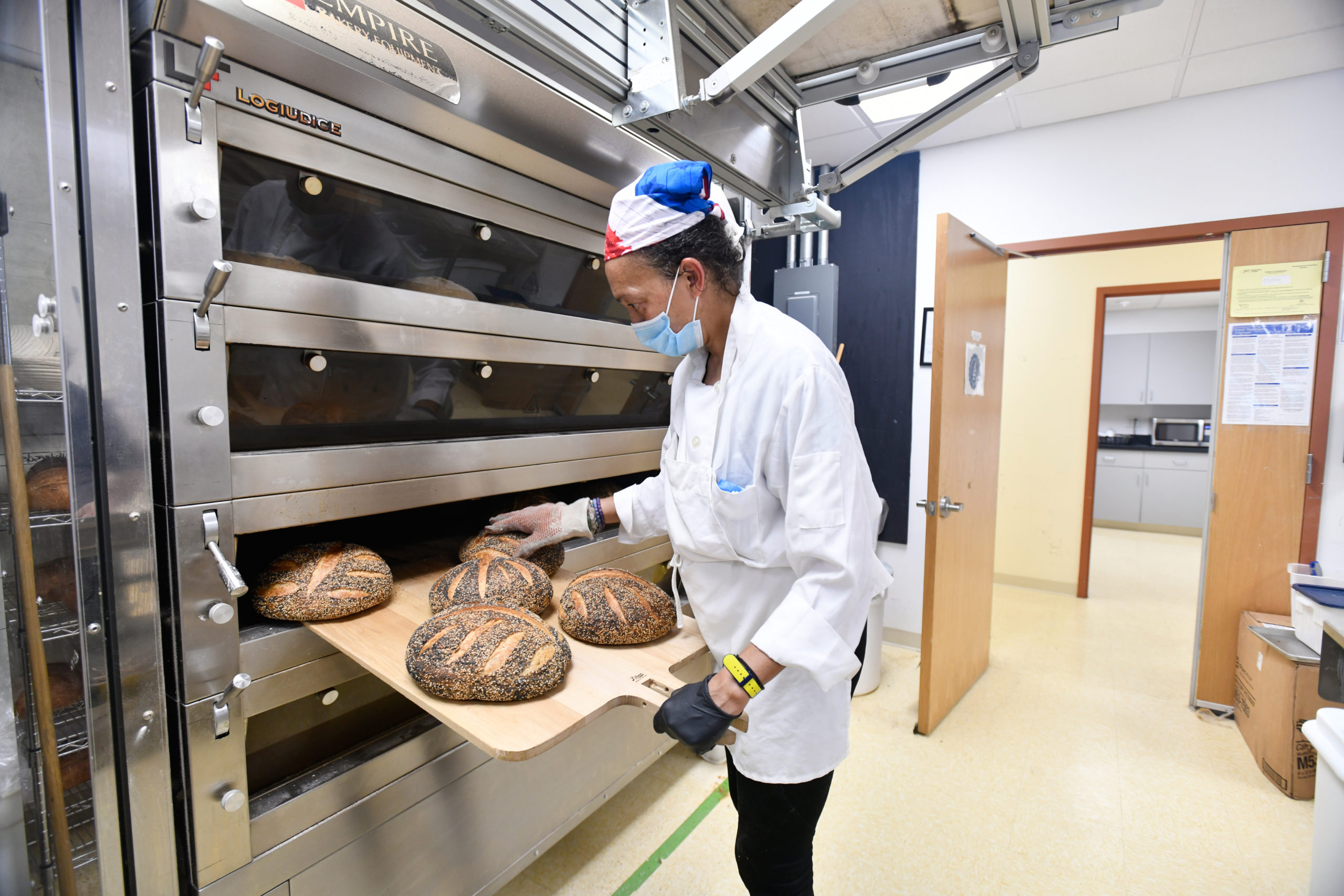 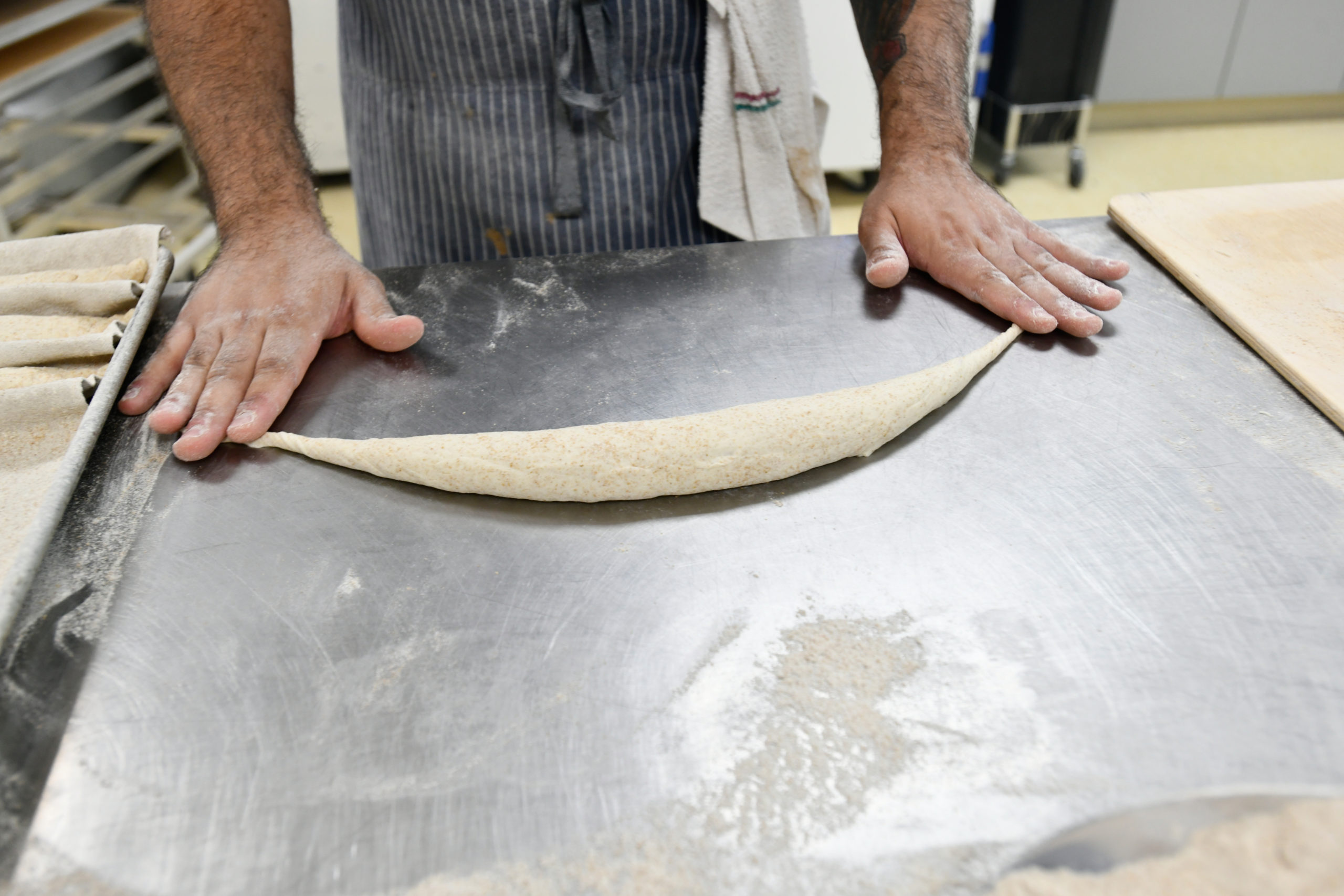 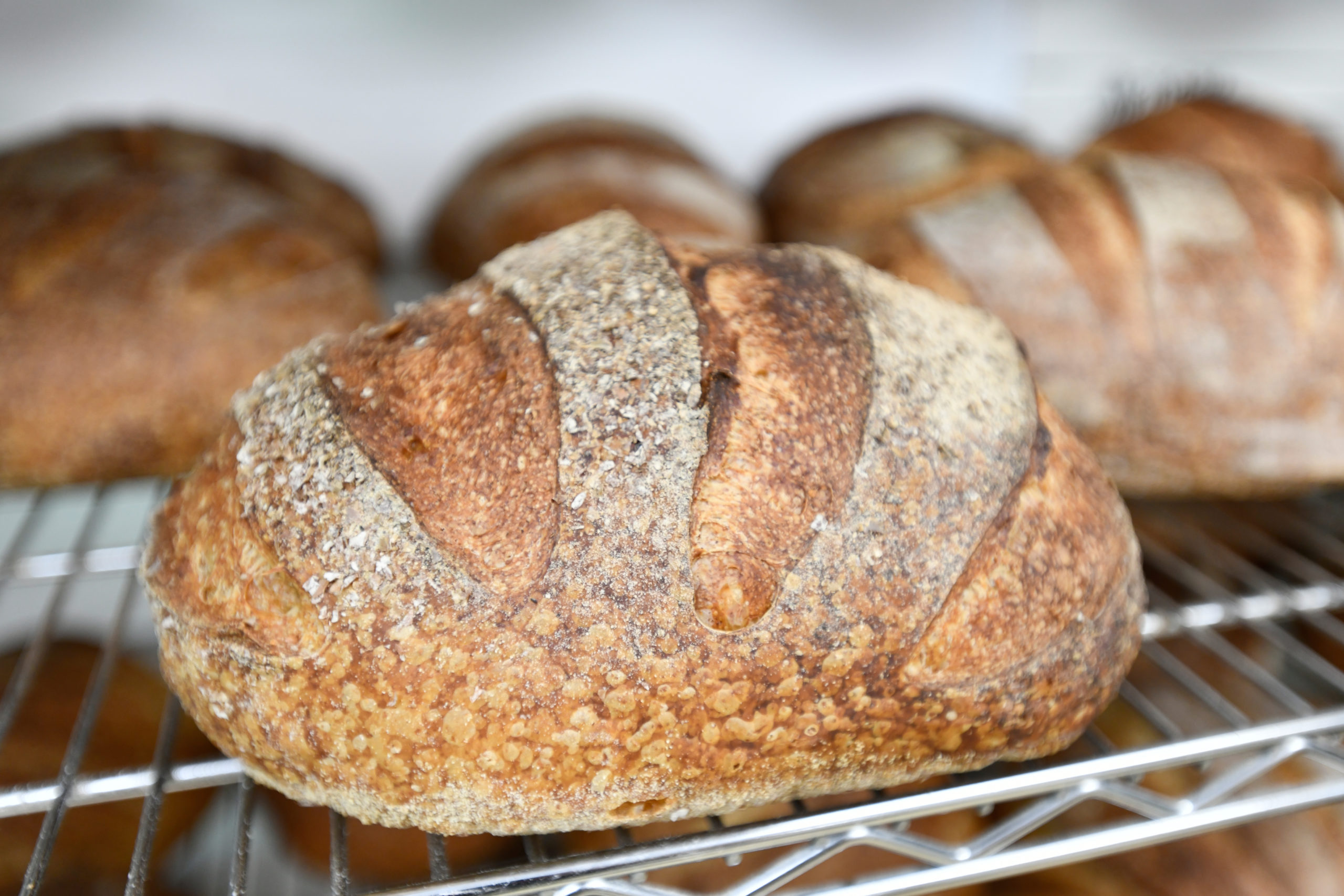 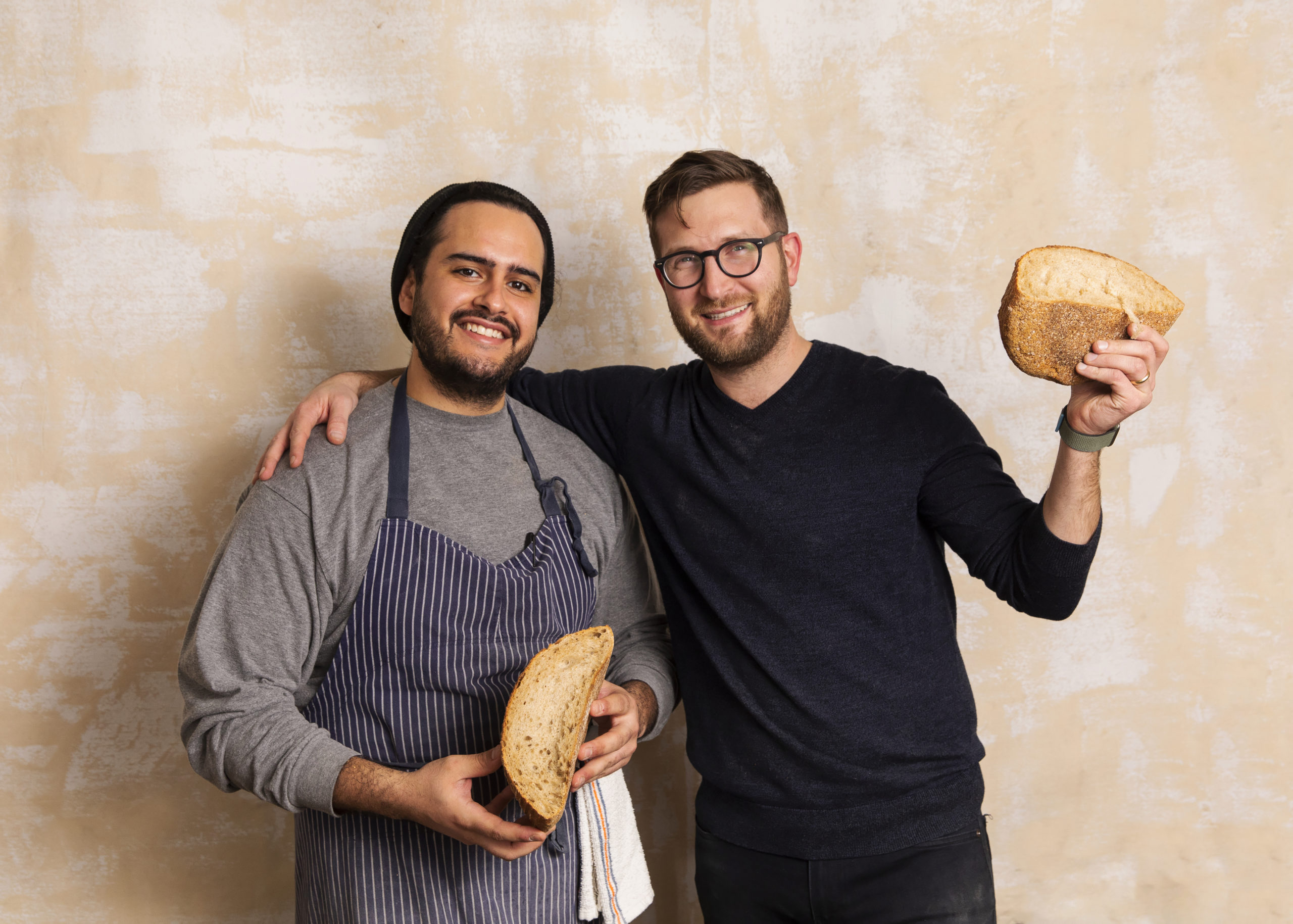 Head baker Carlos Barbosa and founder and CEO Stephen Robinson with some of their famous bread. Levi Mandel

Last March as lockdowns drove everyone inside and insane, Stephen Robinson got really into sourdough baking, as many cooped-up people did. But unlike many of them, he’s managed to turn his hobby into a rapidly expanding business that now produces over 14 different bread products and lists Topping Rose House, Public Hotel, and Citarella as clients.

Robinson is the founder and CEO of Newlight Breadworks, formerly Hampton Sourdough, an artisan breadmaker. The company rebranded on May 25 of this year, as Hampton Sourdough is both too generic to trademark and slightly inaccurate — although all their breads have some sourdough component, they bake everything from Japanese milk bread to brioche. Newlight Lane, in Water Mill, is where Robinson’s first client is located: Babinski’s Farm Stand. Back then, Robinson was baking loaves in his in-laws’ kitchen and hand-delivering them. Amid yeast shortages, he had his mother ship him a starter from the West Coast.

“During the early part of COVID, like many people, I latched on to sourdough baking to bide the time,” Robinson said in a recent phone interview. “It’s something that I had been doing throughout my life intermittently, as a hobbyist, with my mom being the inspiration behind that. I grew up [on] the West Coast and so sourdough is very much part of the culinary fabric [there].

“When I noticed the zeitgeist around sourdough kind of reaching a crescendo during COVID, during the early part of the lockdown, I thought to myself, maybe there’s an opportunity to perhaps monetize some of the great bread that I was producing in my in-laws’ home kitchen,” he added.

After a successful start at Babinski’s, Robinson got an email from the executive chef at Topping Rose House in Bridgehampton. His breads passed the taste test and Topping Rose put in a big order for the Fourth of July. Robinson, whose background is in media and advertising, realized he had something big on his hands. He began reaching out to potential partners to see if he could turn sourdough into dough.

“[It] turned out there was kind of a market gap that existed out here for high-end breads, where people were really open to trying us out,” Robinson noted.

Although it hasn’t been all smooth sailing, Newlight Breadworks has managed to grow rapidly and organically. They first moved to the East End Food Institute on the Stony Brook Southampton campus, and then to Stony Brook University’s Food Business Incubator, in Calverton.

“We have a small 600-square-foot room there where we installed a four-deck oven and a couple of large spiral dough mixers,” Robinson said. “We have a proofer, we have all the basic things that we need to scale, but we’re starting to reach that upper threshold for what we’re able to achieve within that room. I don’t know when, but I’m sure in the future, there’ll be a moment where we will need to venture out onto our own and get our own production facility.”

Robinson attributed much of Newlight Breadworks’ success to its head baker, Carlos Barbosa, who came on board toward the end of 2020. Barbosa, who’s in charge of training new bakers, managing the team, and day-to-day execution, has a unique background in baking and fine dining. He worked at Dominique Ansel (inventors of the cronut), moved to Meyers Bageri, a Danish bakery in Grand Central Terminal, and then was in charge of sourdough at Manhatta, part of the Union Square Hospitality Group in Lower Manhattan. In addition to Barbosa, there’s associate head baker Ren Crook, and around eight hourly bakers, although their numbers keep growing (as does Robinson’s family — he became a father this June).

In its Calverton facility, Newlight Breadworks can put out anywhere from 800 to 1,500 units a day. Leading up to Memorial Day, the bakery was producing 2,000 units a day across all products. Part of what confers super-premium status onto the breads is the amount of time involved — from the first rise to the final pull out of the oven, the breads take around three days to produce.

“There’s no shortcut for the time that we infuse into the product itself,” Robinson explained. “The time allows for greater complexity of flavor.”

“We do a multigrain, we do a milk bread, and we do a deli rye,” Robinson said. “I love each of those ones in no particular order. I think each one of them has their time and place for use. The milk bread is really unique; it’s like a Japanese-style milk bread that we’re able to produce. The deli rye is a beautiful piece of rye bread. That’s kind of a cross between Carlos’s roots working for a Danish baker in his past and also my roots: My family, generations back, owned kosher delis in Brooklyn. And then the multigrain is super hearty and just fantastic.”

The definition of sourdough is essentially bread made using a sourdough starter, a fermented leaven that a baker cultivates and perpetuates across time and generations of loaves. Sourdough yeast works more slowly than commercial active-dry yeast, but yields more complex flavors. Robinson’s mother has been a hobbyist baker for years, and he thinks her starter came from a class taught by Seattle-based chef Tom Douglas. Now, Robinson’s favorite kind of bread is incorporated into all his products.

“One thing that Carlos has made me realize is that sourdough is just yet another option for leavening bread. It doesn’t always have to be the exclusive leavening agent in a dough,” Robinson explained. “It could work in tandem with commercial yeast and things, but it does always add a bit of lactic flavor. It’s definitely a nice addition from a complexity standpoint.”

You can find Newlight Breadworks’ products at farm stands, farmers markets, restaurants, wineries, and supermarkets across the East End as well as at a few locations on the North Fork, and the business is beginning to creep city-ward as well. The company boasts over 60 accounts, a number that is growing rapidly. Additionally, Newlight Breadworks consistently donates fresh-baked bread, not leftovers, to Springs Food Pantry and Montauk Food Pantry as well as giving intermittent donations to other charity organizations. Recently, the bakery sent over baked goods to an auction for the Southampton Fresh Air Home, and in the past has donated to fundraisers for the Southampton Animal Shelter.

With its unique product line, all-star team, and early success, it seems Newlight Breadworks’ fortunes will continue to rise like a freshly kneaded sourdough boule.

More information about Newlight Breadworks can be found at newlightbread.com.