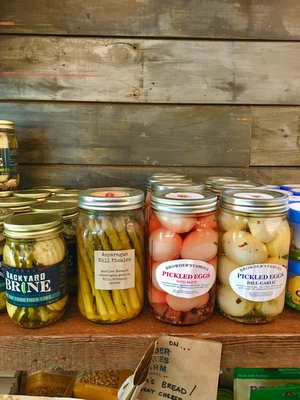 Amber Waves Farm in Amagansett has opened a market that sells various types of pickles from local purveyors. HANNAH SELINGER 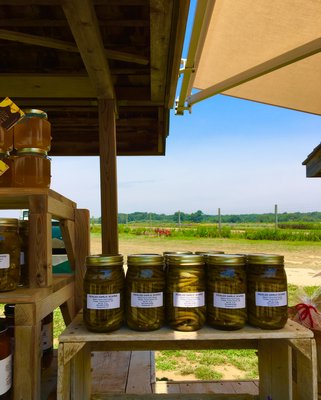 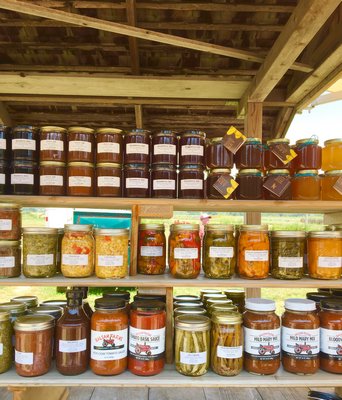 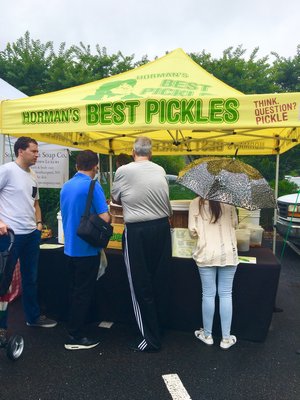 In East Hampton, patrons line up at Horman’s Best Pickles, even in the rain. HANNAH SELINGER 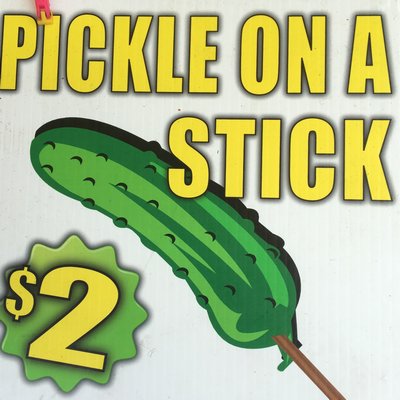 A family friend likes to tell this story about my Brooklyn childhood: Left to roam the backyard of our Flatbush Avenue home, I would somehow invariably find myself at the paned back door that belonged to my neighbors, where I begged for food. “Olive?” I would say, hands outstretched, pronunciation shameful, until my neighbors, left with no other choice, would forage through their refrigerators, coming back with those briny treats that, even at 4, I knew I loved.It is possible that we are born with our palates. And mine has always been pickled.

Don’t get confused here. I just want to explain a little about olives and why the ones we eat here, in the United States, are actually, well, pickles.

Olives are a fruit that, left untouched, are kind of bitter. We don’t eat them raw. We can’t actually eat them raw. Instead, we press them into oil, or settle them in salt for the long haul. In Europe, olives are cured in oil, preserved in tins and glass jars for later use. Here, we more commonly cure them in brine, which is basically just a fancy way of saying that we pickle them.

Before it was fancy and hip to pickle, say, the Tokyo turnips rescued from one’s weekly CSA box, pickling was a method of preservation, preferred in places and times when refrigeration was not an option. Along with salt curing, drying and smoking, pickling allowed hunters and foragers to stretch their available food supply.

If you thought that a bunch of Portland homesteaders developed pickling in the early 2000s, think again: Pickling dates back as far as 2030 B.C., when inhabitants of India’s Tigris Valley pickled for preservation purposes. (Say that three times fast.)

As the child of the children of Eastern European Jewish immigrants, I’m left with a different pickling narrative.

In the late 1800s and early 1900s (my own family came to America after the fall of the Russian czar in 1917), New York City became the unofficial home of a specific kind of pickle: the full- and half-sour cucumber pickle. Turn-of-the-century Delancey Street might as well have advertised the vegetable on its street sign.

Along with the advent of sanitary canning practices, which took place around the same time, the pickle business boomed. The pickled cucumber became the most commonly brined veggie, and the pickle, generally, became more of a condiment than a sacred, guarded, saved treat from harvests past.

Pickling, as a tradition, marries Old and New World traditions, historic technique, and culinary intrepidness. We have adopted, from our culinary ancestors, the traditions of preservation, and now put them to good use in new and exciting ways.

Across the world, pickling has been used for centuries. In China, cooks pickle mustard greens and use them as condiments. Denizens of the Southern United States save the rind from their abundant watermelons. The Indian “pickle” can be carrot, onion, mango or lemon, depending on the application.

Let’s not forget the pickle in our drinks. The classic cocktail known as the Gibson, essentially a martini (gin, very dry vermouth) garnished with a cocktail onion, is an homage to the pickle. Tiny onions are brined and kept salty-sweet, the perfect complement to a drink that can only be described as bracing.

But my favorite use of pickling is as a reminder that what we have now, in such startling abundance, will soon be gone. I feel pity for the winter version of me, the one who will be met with a near-bare fridge, the one who will feel compelled to buy blueberries—which taste like too little, for too much—from a chilly grocery store aisle. I spend the summer reveling, yes, enjoying each sun-warm berry that I shovel into my greedy mouth.

And I also set aside some of summer’s best, from fruit to veggie, in anticipation of the long, hard trek ahead. It’s not homesteading, really—not when you have King Kullen down the road, 365 days a year. Still, there is something sacred about the yearly ritual of preserving what was picked at its peak. We see pickles as a condiment, as a sentence’s comma: serving a purpose, but not the main point. What if they’re the exclamation point, the thing that sets the tone?

If summer speaks to my agricultural sensibilities, pickling transports me elsewhere. I can communicate with the dead, with those who preserved before me.

Food is a long, and often lonely, narrative. It haunts us, drowns us in its nostalgia. A pickle is a thing, eaten alone or with other things. Or it is a 4-year-old, impulses not yet tamed, hands outstretched, begging, begging: