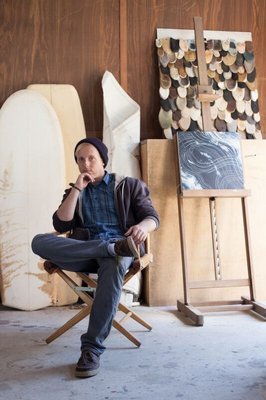 The four course vegan comfort food meal with one glass of wine or beer is $49 per person plus tax and tip. Reservations are required and can be made by calling the restaurant directly at 631-537-5665.

Scott Bluedorn was born in 1986, in Southampton and received his BFA from the School of Visual Arts in Manhattan. He has exhibited extensively on the East End, including at the Southampton Art Center, Kathryn Markel, Folioeast, Roman Fine Arts, Sag Harbor Whaling Museum, Crush Curatorial, Ashawagh Hall, and the Parrish Art Museum as well as in galleries in Nantucket, New York City, and Miami.

Bluedorn’s work is also on view at The Edward Albee Foundation in New York City, and included in numerous private collections in the US, Canada, Ireland, France and Portugal. He lives and works in East Hampton.

Almond is at 1 Ocean Road in Bridgehampton. To reserve, contact 631-537-5665 or visit almondrestaurant.com.

More and more people are choosing to eat plant-based foods to sustain good health and ... by Janeen Sarlin

Festive, but uncomplicated dishes make holiday dinners easy for the cook as well as the ... 19 Dec 2019 by Janeen Sarlin

When Rebecca Edana decided to host a Hanukkah party, the local actor neglected to add ... 16 Dec 2019 by Michelle Trauring
Sign in to comment