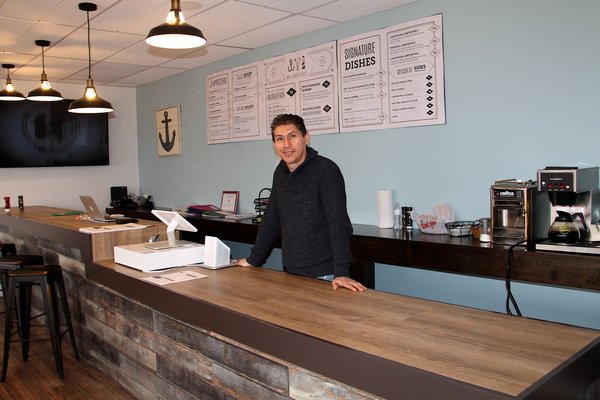 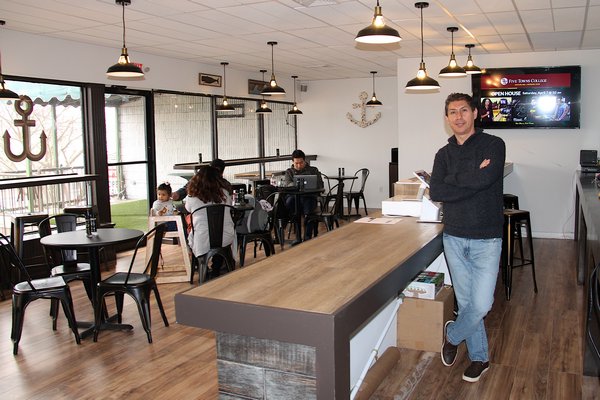 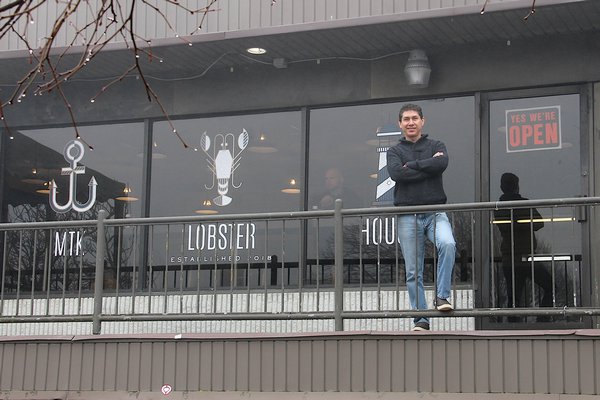 The restaurant’s owner, Diego Flores, was formerly a manager at the local-friendly and always-popular Shagwong Tavern, a year-round bar known as a Montauk landmark. His concept is “fast, casual seafood,” with a menu that includes appetizers of lobster quesadillas, calamari with a trio of dipping sauces, steamed mussels, and baked local clams. The menu also includes a “build-your-own burger bar.” Patrons choose a bread and a protein (beef, chicken, veggie, crab cake or fish fillet) and add cheese, toppings and sauce.

But Mr. Flores considers the MTK Lobster House Boil to be the restaurant’s signature dish. The meal contains a quarter-pound steamed lobster, clams, mussels, shrimp, corn on the cob and potatoes, all dusted in Old Bay, and costs $38. Other entrées are similarly lobster-centric, from the dueling lobster rolls (Maine-style vs. Connecticut-style) and a BLLT, which adds—you guessed it—lobster to the classic sandwich. For little ones, the restaurant offers chicken fingers, hot dogs, mini hamburgers, grilled cheese sandwiches, and fresh fish sticks.

Lobster is sourced in Montauk and is abundant. The Maine-style roll was stuffed to the brim with chunks of lobster and was adorned with crisp celery, lettuce, and just enough mayonnaise. The top-split hot dog bun came with the requisite grill marks and, also, a side of fresh, toothsome French fries. The sandwich goes for $25, which is average for East End lobster rolls. Lobster bisque, served in a large, deep bowl, was complex and rich, owing to the addition of brandy. The stock used is lobster shell-based and the soup itself, served with a side of oyster crackers, has a substantial mound of chopped lobster on top. For $9, it may be the lobster bargain of the 2018 season.

Mr. Flores, a native of Ecuador, came to Montauk in 1992. He began his East End career at Gurney’s, moving over to manage the Shagwong in 2005, where he stayed for more than 10 years. “I thought it was time to move on and start looking for my own place,” he said. He reached out to Michelle and Mike Tadross, his current landlords, who helped him to launch the business.

MTK Lobster House’s dining room is rustic and chic, with black metal chairs and a reclaimed wood style throughout. Once the weather is warmer, the restaurant will open its patio seating facing Montauk’s main drag. There are no servers, and drinks are self-serve from a cooler in the dining room; the menu is posted above the cashier. In a kitschy nod to casual seafood haunts of days past, food is served atop sheets of mock newsprint from “The American Times.” Take-out is currently available and delivery for Montauk residents will begin with the season.

The restaurant has enjoyed some popularity so far, kicking off on parade weekend with substantial crowds. Currently, MTK Lobster House is open five days a week: Wednesdays through Fridays, 11:30 a.m. to 9 p.m. and Saturdays and Sundays, 10 a.m. to 10 p.m. Come May, the restaurant will shift to a seven-day schedule. Mr. Flores hopes to stay open year-round.

“People are very excited about the place,” Mr. Flores said. “They like the renovation, menu, and especially the prices.” Appetizers range from $12 to $15, while entrées range from $18 to $38, placing the restaurant on the more affordable side of Montauk dining. And affordable, according to Mr. Flores, is a key word, given the town’s tack toward more expensive food options.

Foodstuffs: Specialties To Go For St. Patrick’s Day And Purim

St. Patrick’s Day and Purim To Go Specials from L&W Market This week, L & W Market in Bridgehampton will be offering to-go specials for St. Patrick’s Day and Purim. Orders must be placed by Tuesday, March 15 for pick up on Wednesday, March 16, and Thursday, March 17. For St. Patrick’s Day, old school corned beef and cabbage dinner (house brined, grass fed beef, Balsam cabbage, Sagaponack fingerlings with grain mustard) serving 4 is $119. Irish soda bread is available for $15 For Purim, Hamantaschen cookies are available and are $16 for 6 pieces, 3 flavors. L & W ... 14 Mar 2022 by Staff Writer
×