South Fork Bakery: Where The Love Is Baked In - 27 East 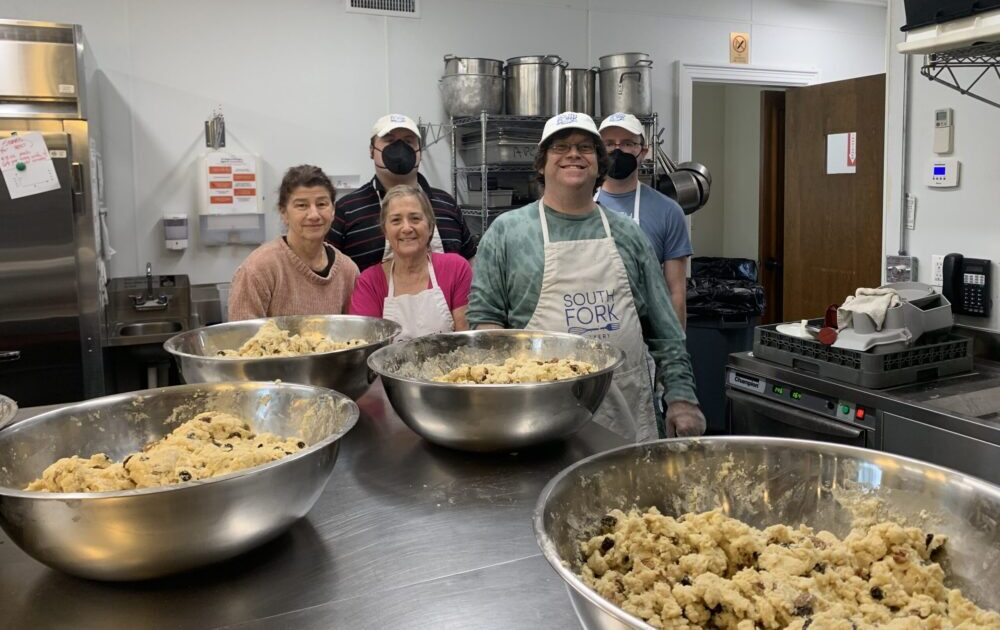 Eleni, Robert, Elvira, Warren, and Scott take a moment to smile for a photo. COURTESY STACYDERMONT.COM 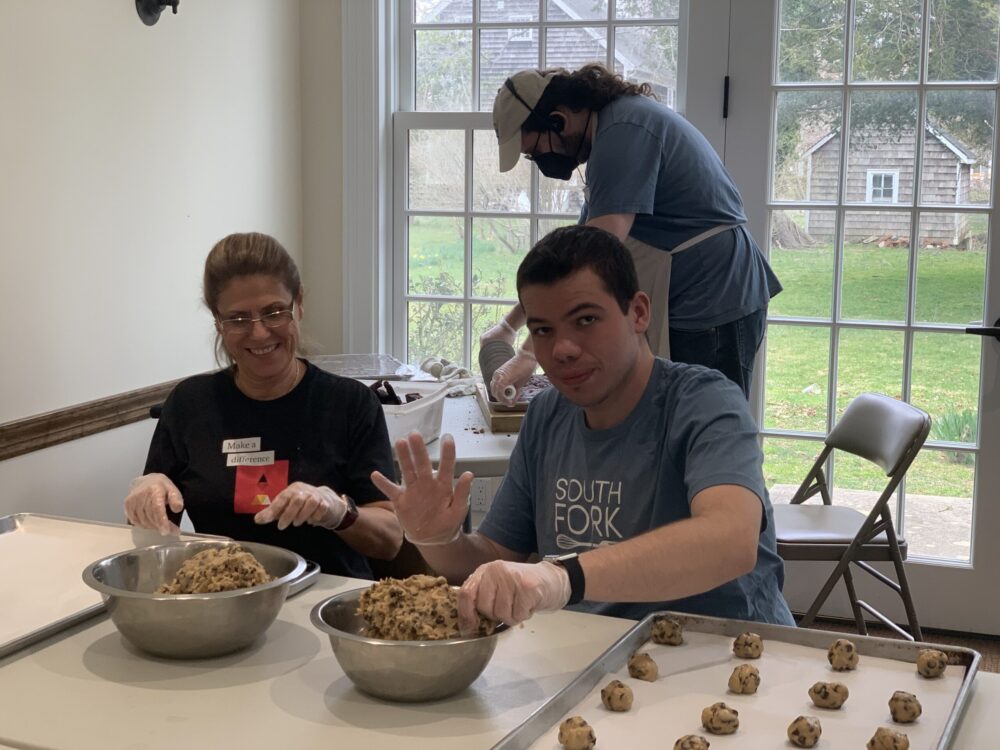 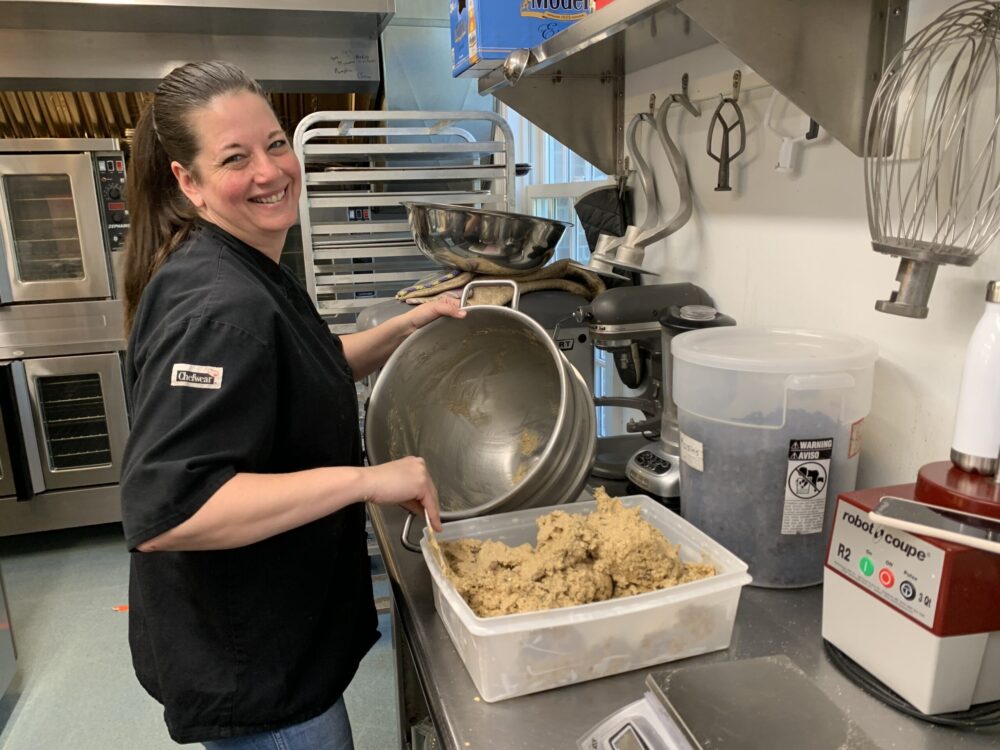 SFB's Baker Chef Jessica Taccone is all smiles while working in the kitchen with her crew. COURTESY STACYDERMONT.COM 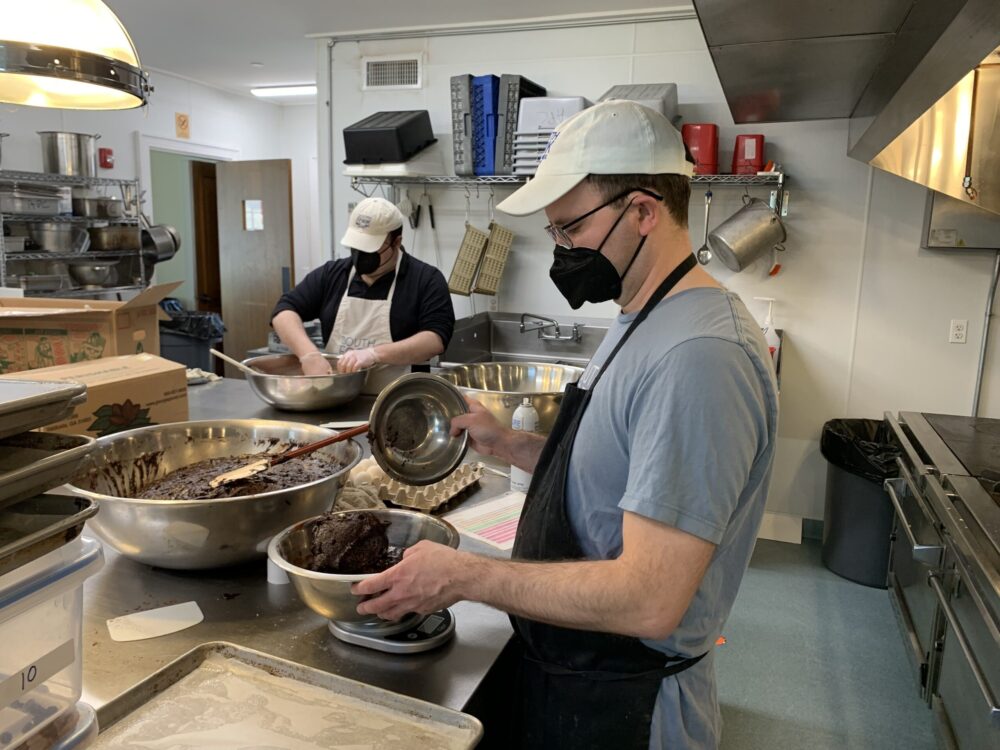 From left, Robert and Scott at work in the SFB kitchen at Scoville Hall in Amagansett. COURTESY STACYDERMONT.COM 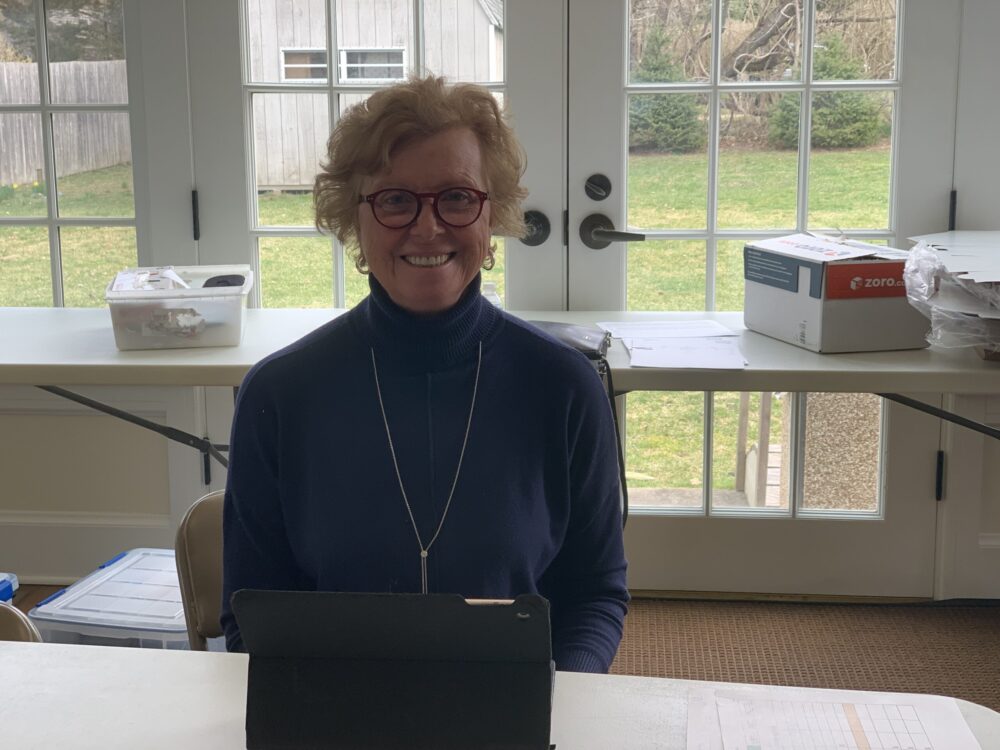 April is Autism Awareness Month and a time of transition at South Fork Bakery for the Special Needs.

Based on the East End, South Fork Bakery was founded by speech-language pathologist Shirley Ruch to provide meaningful, paid employment to adults with disabilities. It became a nonprofit organization in 2018.

Ruch, who has had a private practice for over 30 years, specializes in working with children with autism. She was inspired to help her students who were graduating from high school or college with few employment prospects. More than 80 percent of adults with disabilities are unemployed, according to the Bureau of Labor Statistics. There are 33 million people with disabilities of working age in the United States, according to the National Organization on Disability — that’s over 10 percent of the population.

“Seeing the progress of employees’ ability to improve their skills and to challenge themselves to do a new thing, seeing their delight — they’re very proud — that’s what keeps South Fork Bakery going,” Ruch said.

Last year, two enrollees in a pilot program received training and went on to work at a food operation in Calverton. The plan is to increase the number of outbound trainees each year. While today many South Fork Bakery employees can work independently, they require intensive, one-on-one initial training. Members of the public can sponsor employees through South Fork Bakery’s website, southforkbakery.org.

With the ongoing labor shortage, many believe that the time is ripe to reimagine the American workplace peopled with neurodiverse staffers.

Ruch is currently reviewing sales and labor data to determine the best way forward. “We’re so busy at Christmastime, it’s all about filling orders,” she said. “This might not be the best use of our efforts. We need to be focused on training.”

But, of course, it’s not all business.

“I knew this was meaningful work,” Ruch said, “but the social piece was a surprise, seeing friendships connect outside the bakery — when you work in groups for years it happens naturally.”

This month, South Fork Bakery is also promoting the food products of friend organizations Popcorn for the People, which is based in New Jersey, and Savor by Suzie, a pretzel baker in Pennsylvania.

Most programs that employ people with special needs are not focused on training as a path outward. Ruch is confident that that component could be added to those programs and that the South Fork Bakery training program could serve as a model.

“The focus on using the bakery as a training ground for basic job skills such as communication, collaboration on the job, executive function awareness and strategies for compensating for challenges with them are all skills we focus on in the training,” she said.

Ruch added that she is hoping to set up protocols in order to establish a program that could be replicated in other communities. “So young adults could work in their communities,” she said.

“This is not like any kitchen I’ve ever worked in,” Taccone said. “No one’s ever late, or leaves early, or quits, or is even in a bad mood.”

But in speaking to South Fork Bakery employees, it becomes obvious that they have something in common with other food professionals — strong opinions about the best things to eat.

Kyle, who hails from Wading River, names chocolate chip as his favorite cookie as he scoops hard, chilled dough onto demarcated baking sheets.

Taccone calls her gluten-free formula for this treat “ALL chocolate,” but really all the usual, tasty suspects are present — brown sugar, white sugar, vanilla, oats. Color-coded, laminated copies of recipes for each product get passed around the kitchen.

Kyle is new to the program this year. “My favorite thing about working here are the paychecks we get once in a while,” he said.

Taccone has served as head baker of South Fork Bakery since the enterprise began in 2016. Initially, there were just six employees baking under her at the Hayground School kitchen outside Bridgehampton.

There’s no age limit for South Fork Bakery employees. Some will likely work here for many more years.

“I like to work here because mostly I see friends from school and I just think it’s a good work environment,” said Frank from East Hampton. What’s Frank’s favorite South Fork Bakery cookie? “I think that’s gonna be a tough one — oatmeal raisin, chocolate chip, or brownies.”

An avid home baker, Ruch contributed the recipes for ginger snaps and gingerbread. She was surprised by “the amount work involved in owning a bakery — heavy lifting, math.” But working alongside employees at the bakery is the highlight of her workday.

“I’m a teacher,” she said, so “off-the-cuff training and acclimating new employees to training protocols” is right in her wheelhouse.

Peter’s favorite thing to do at South Fork Bakery is make the cookies. But he’s not really into eating them. He prefers pizza and he loves to go fishing with his father. Peter is from “The North.”

Richard is now from Hampton Bays. He lived in Brooklyn before the pandemic. “The fun part of working here is making the scones,” he said. He “never tried baking before, it’s a new experience.” Now he’s into baking.

Geoffrey, who can be seen speaking at length about his experience with South Fork Bakery in a video on its website, has a favorite treat that’s only available in the fall months: pumpkin blondies.

Warren is from Sag Harbor, but originally from Nassau County. He lost his house because of COVID-19. He used to live in Wilmington, Vermont. This is “my first cooking job,” he said proudly. “I like mixing the chocolate chips and the other cookies. And I kinda like the scones too.”

Dietrich from East Hampton’s favorite cookie is the chocolate chip. He enjoys “working in the kitchen, making the scones.” Now he’s “more of a kitchen person.” He also cooks at home, “mainly easy, fast dishes like chicken casserole.”

When asked what her favorite South Fork cookie is, Ruch reacts as if pained by having to choose a favorite among her children:

Kendall is a key player outside of the kitchen itself. He precisely applies many of the SFB products’ labels. And some SFB employees were absent on the day those above were interviewed — for the record, they include John and Patrick.

People from the East End community are welcome to come volunteer in the kitchen. See videos of the staff at work baking on the South Fork Bakery website, southforkbakery.org.

Stacy Dermont is co-author, with Hillary Davis, of “The Hamptons Kitchen” (W.W. Norton & Co.), the cookbook and guide that features over 100 easy, seasonal recipes.

The Russian invasion of Ukraine has affected the East End in many ways. One of the most personal is with the residents of the East End with family and friends in Ukraine who are directly impacted by the war. Sen Restaurant in Sag Harbor has four staff members from Ukraine who are very concerned about the situation in their country, as they all have friends and family still there. On Sunday, April 10, Sen will be putting its Japanese influence aside for a day and doing a fundraiser featuring Ukrainian food and culture in its garden. From 1 to 5 ... by Staff Writer
×