The Coop Is Looking To Ruffle Some Feathers - 27 East 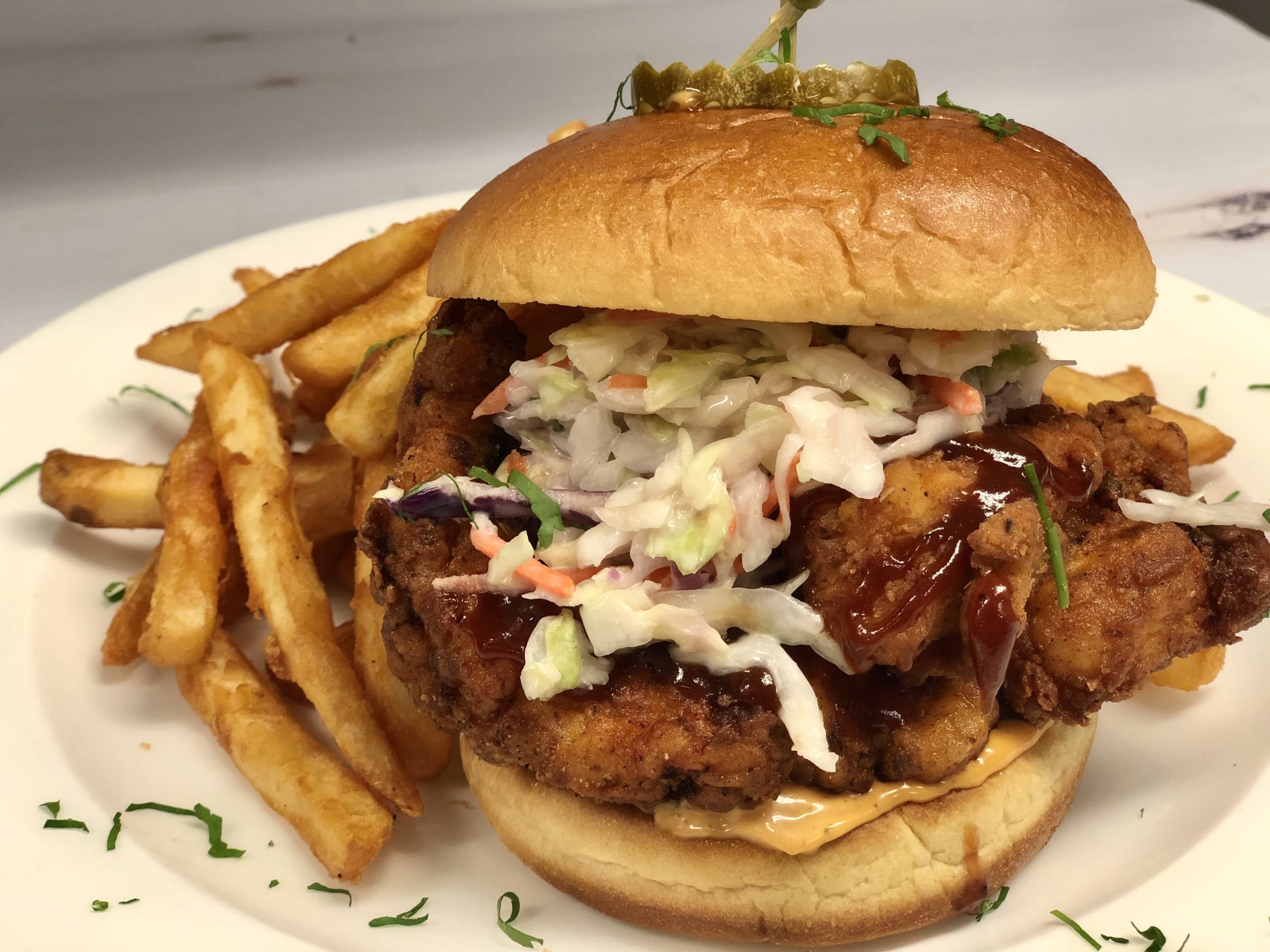 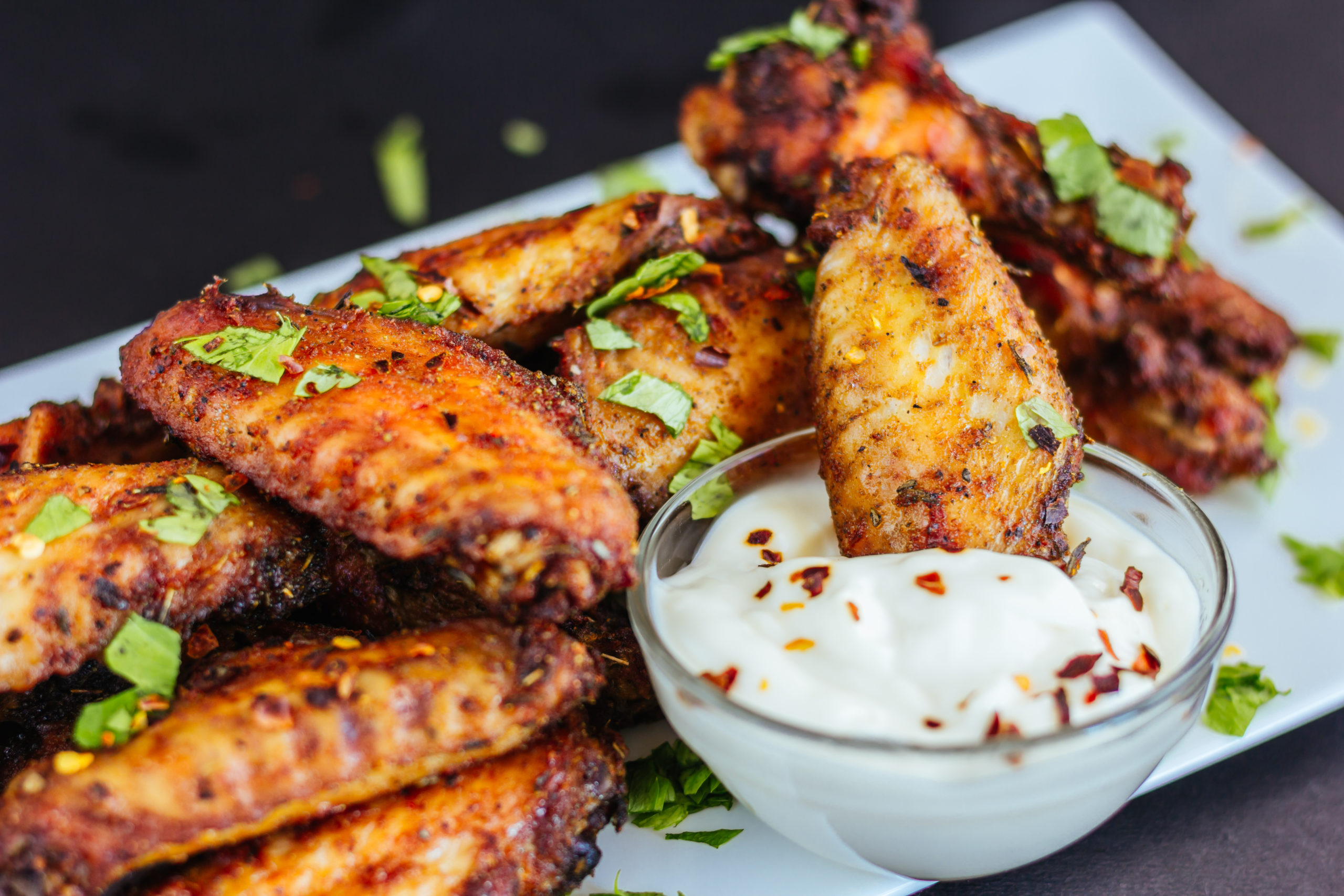 The Coop's wings with bleu cheese. COURTESY THE COOP 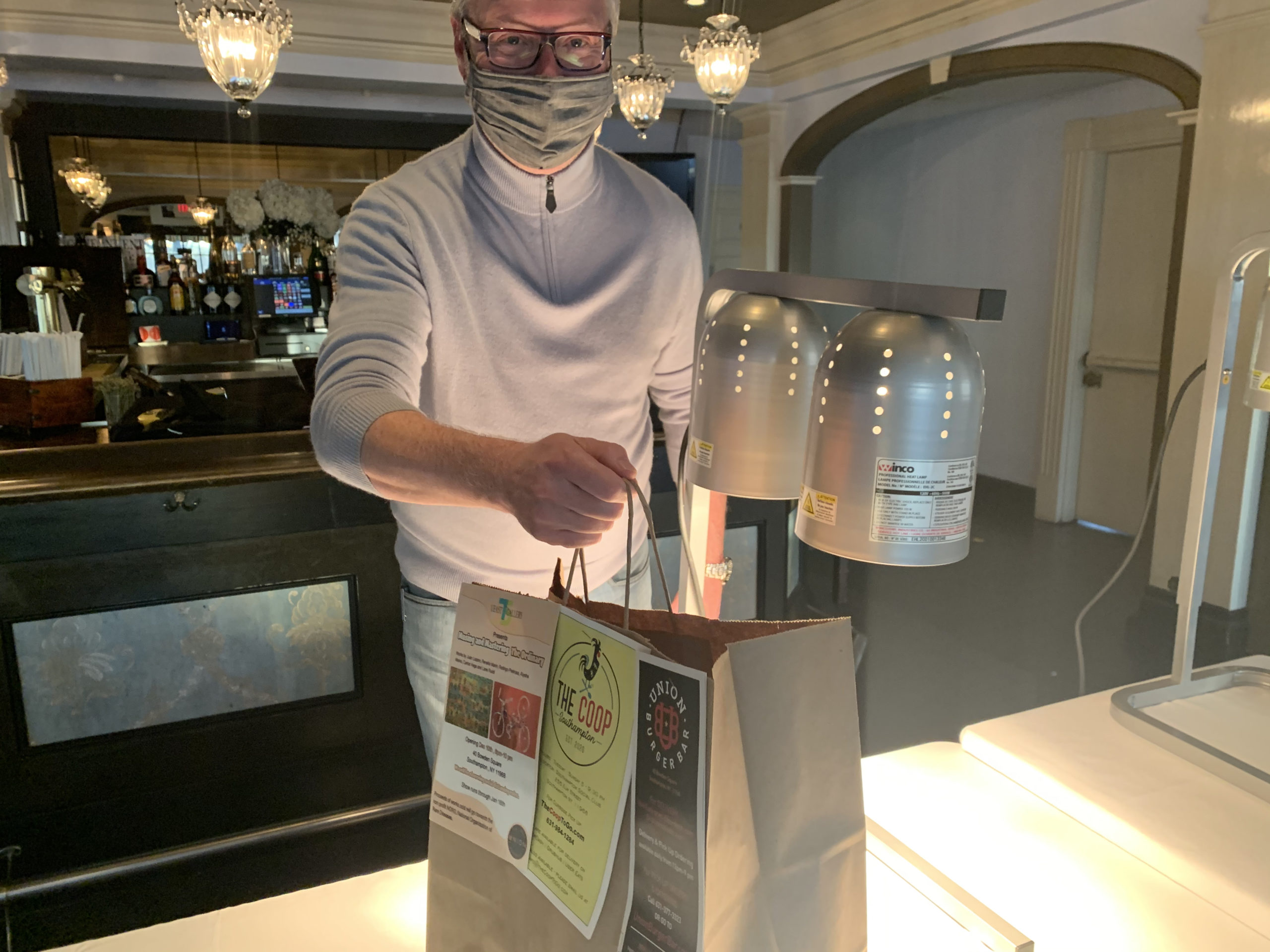 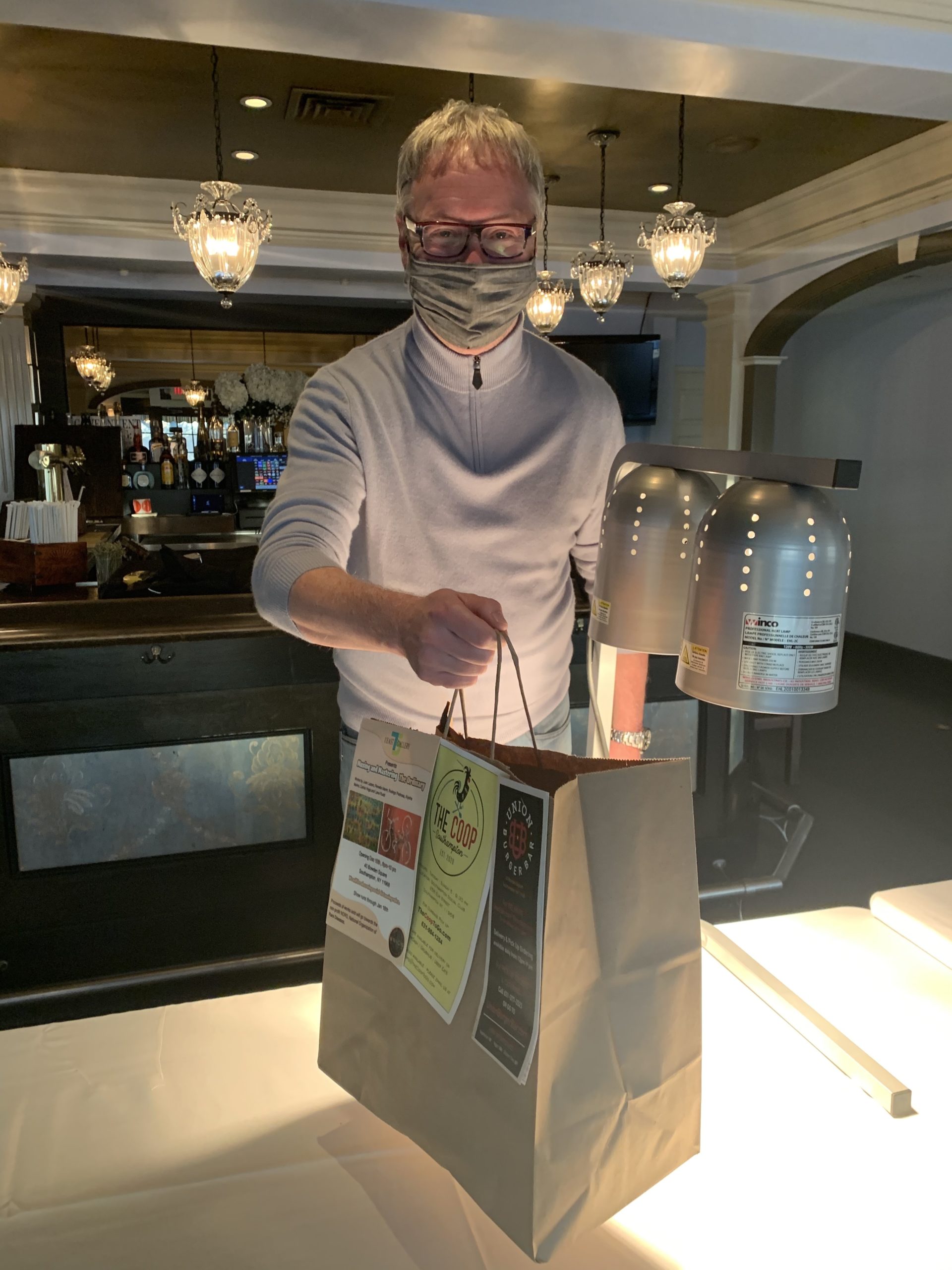 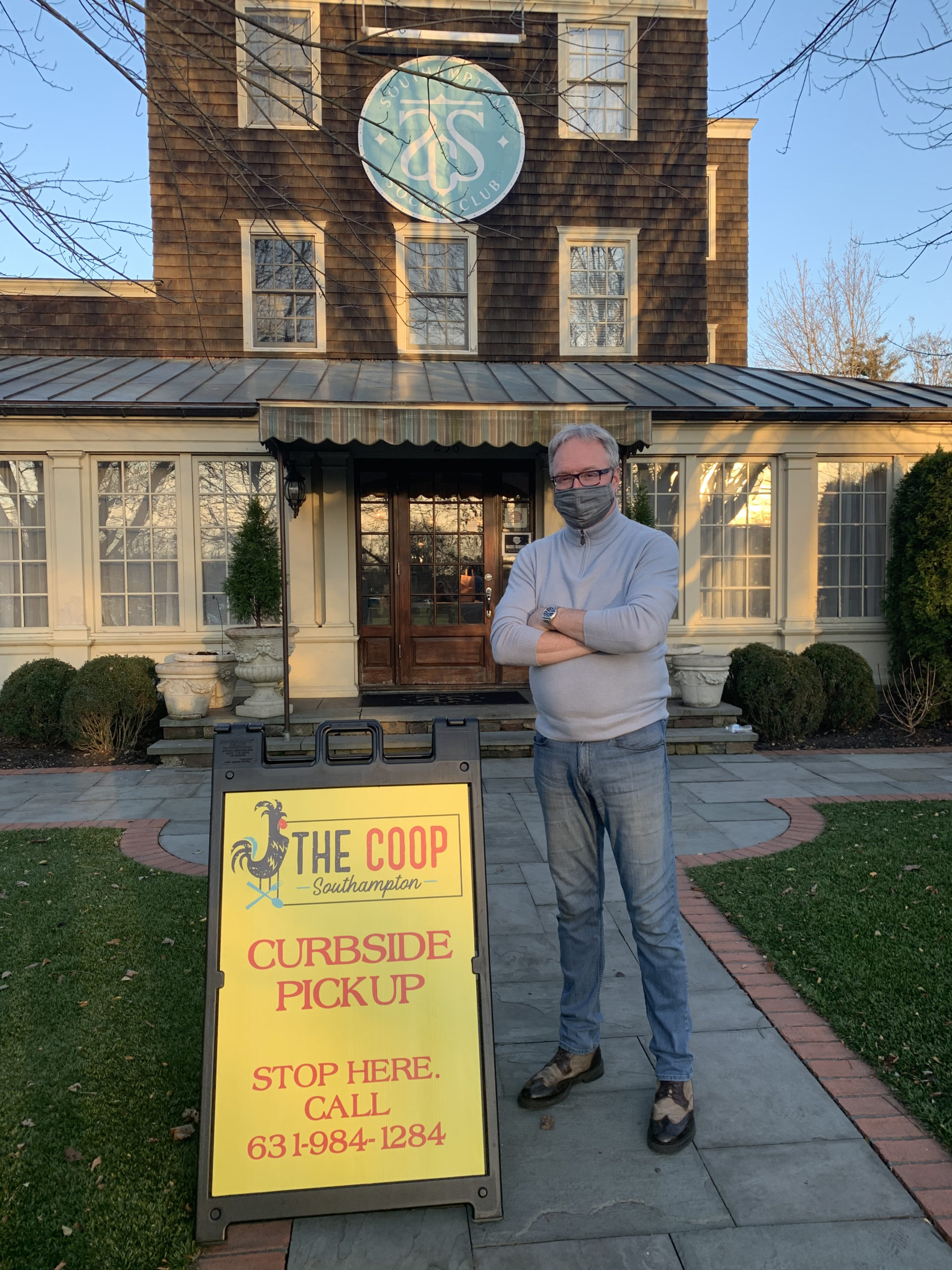 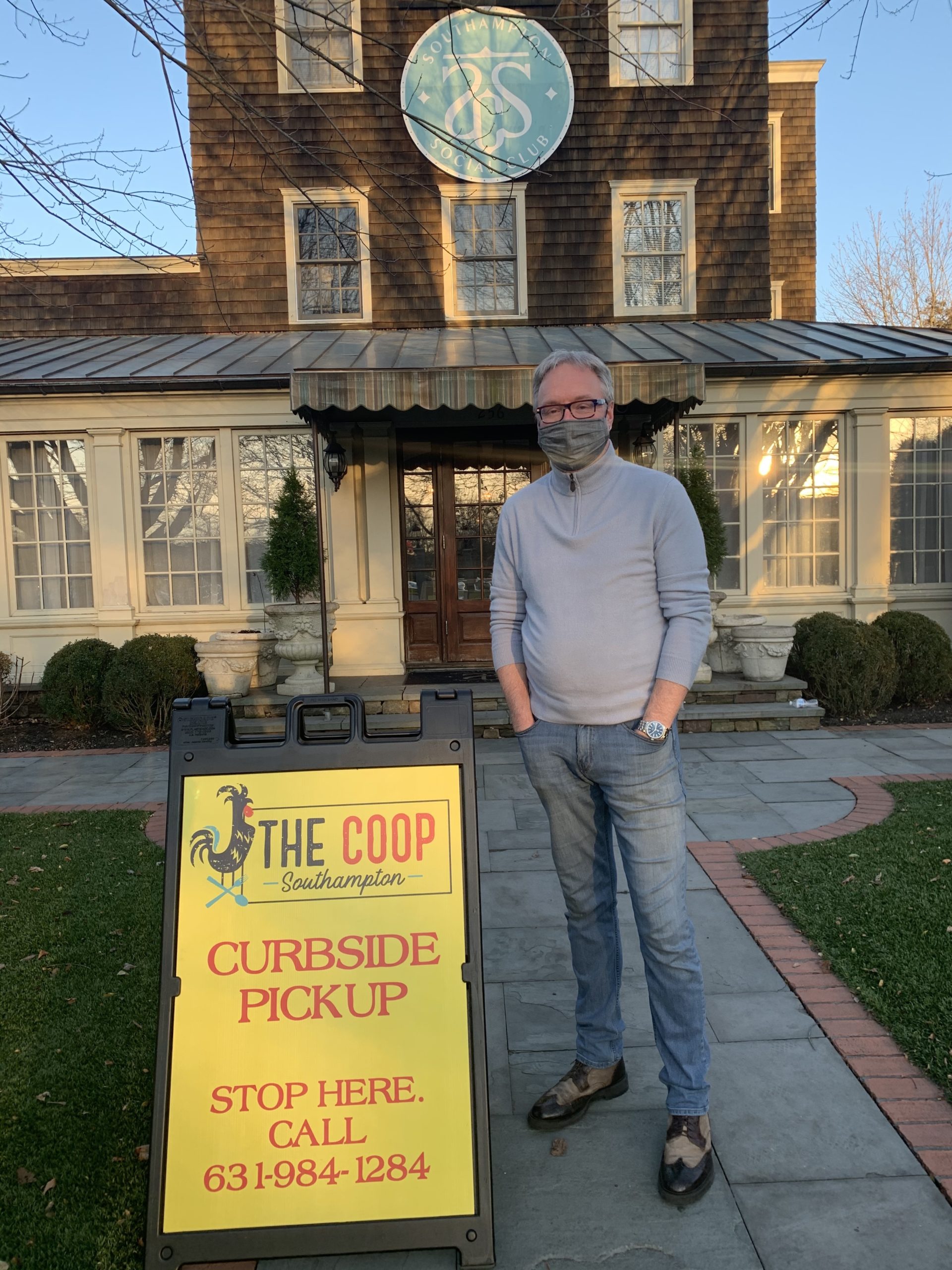 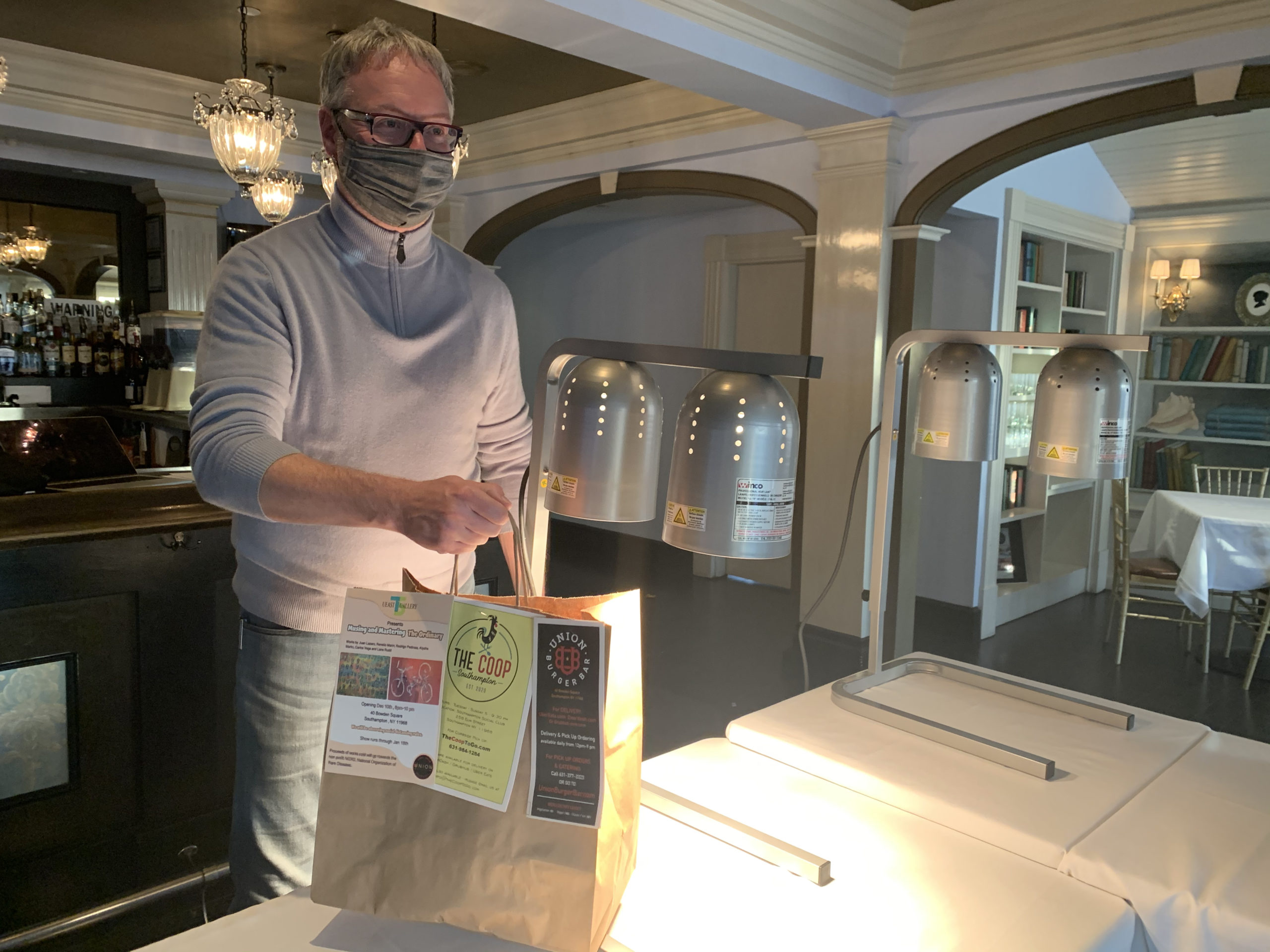 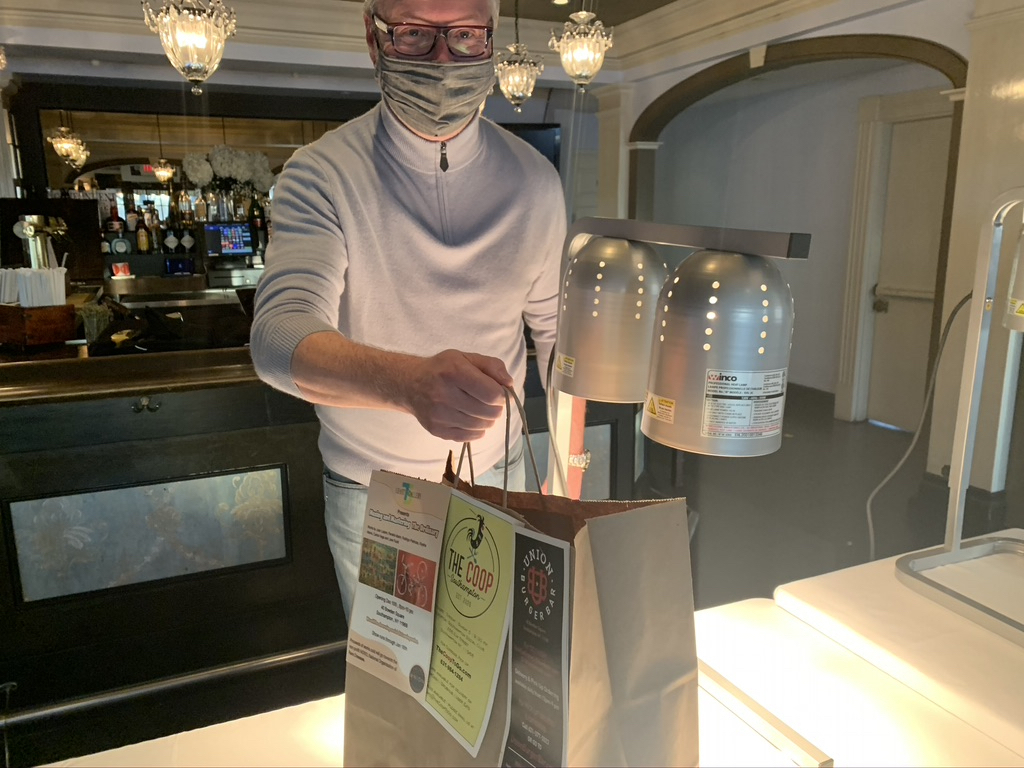 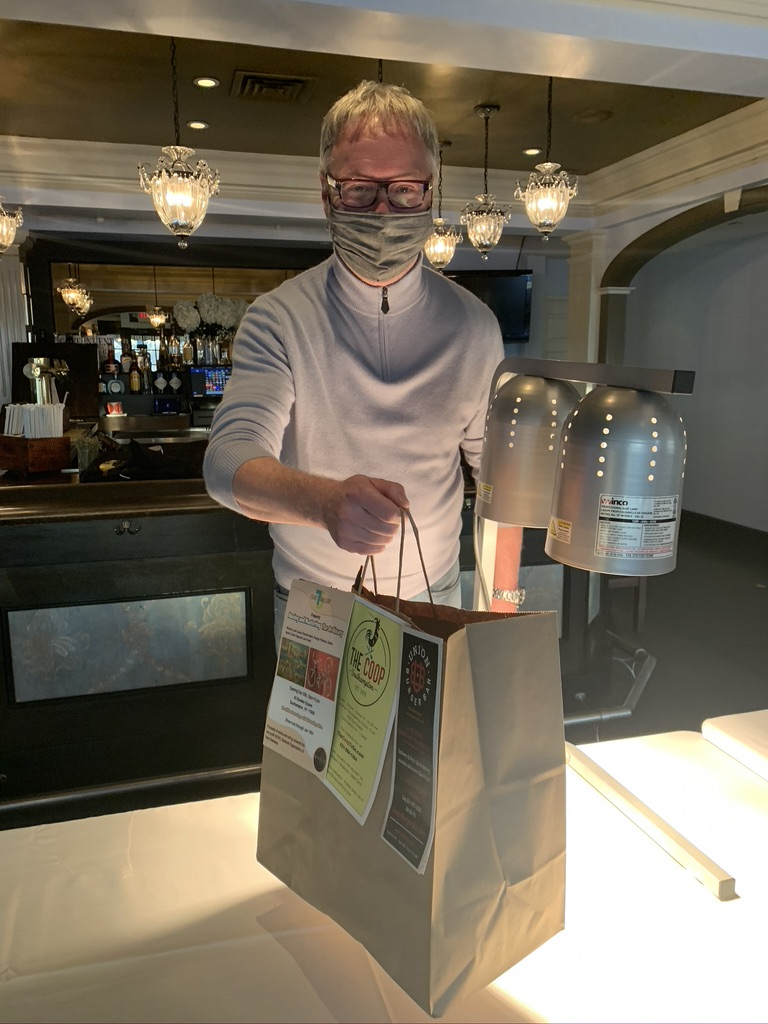 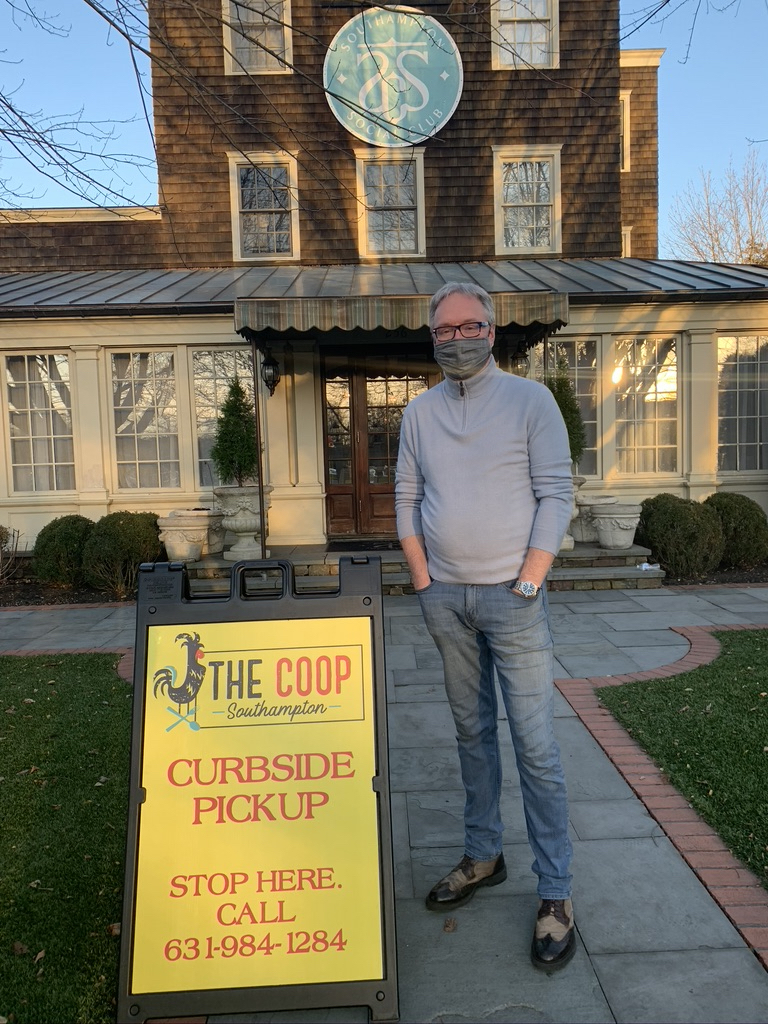 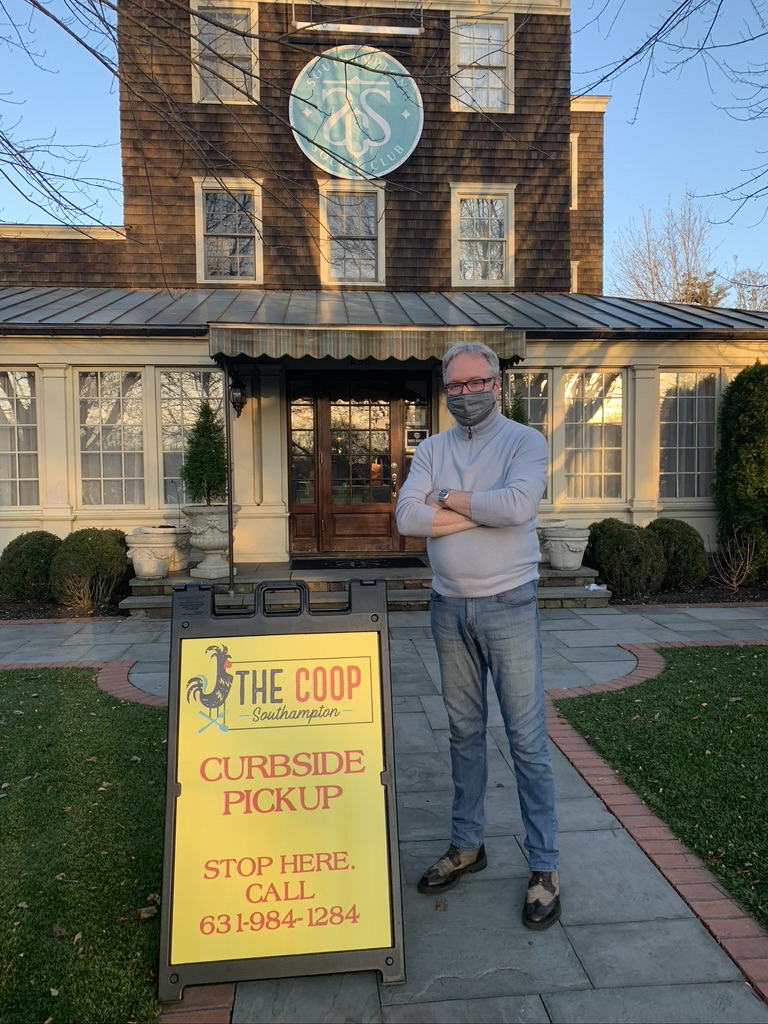 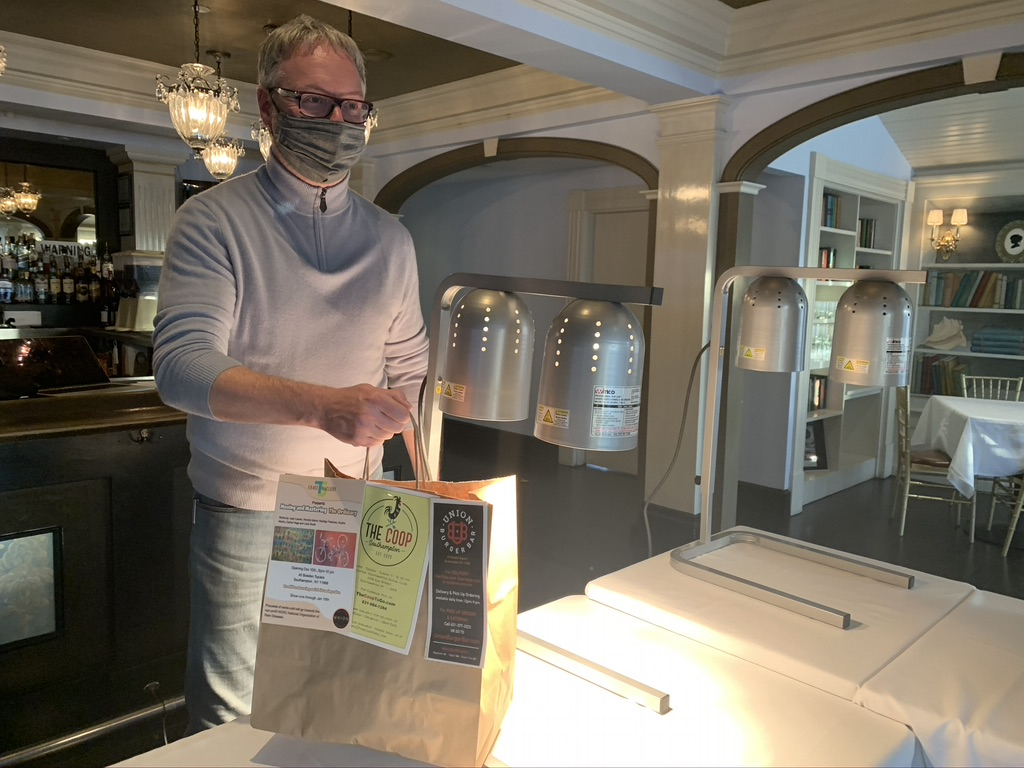 Last December, Ian Duke, owner of Southampton Social Club, was in the midst of the busy celebration season, hosting all sorts of dinners and special events for individuals and companies that had booked the spot for their annual holiday parties.

But this year, it’s very different scene, as a recent late afternoon visit to the Elm Street eatery revealed. With the dining room and bar quiet and empty, the only sign of life was a long table just inside the front door, covered in white linen and set perpendicular to the entrance, it also had been outfitted with a heat lamp to keep to-go orders warm.

COVID-19 has changed the restaurant model, and in order to adapt to the current environment, on December 1, Duke and his partner David Hilty opened The Coop, a take-out restaurant specializing in chicken — both fried and rotisserie style — that is now operating out of Southampton Social Club. Duke, who also owns Union Burger Bar and Union Sushi & Steak just up the road in Bowden Square, describes it as Southampton’s first “ghost kitchen” and explains the concept is one that he first heard about in Manhattan a few years ago.

“The premise was that you had people who had great ideas for food and cuisine, but couldn’t pay New York City rents,” Duke explained. “These guys in Brooklyn or Queens figured out how to utilize big restaurants’ prep kitchens or second kitchens — taking space someone else was not using.

“If you throw them some money to use that kitchen, they’re ahead of the game,” he added. “You narrow that down and the same sort of idea applies here — I’m paying the mortgage the electricity and insurance, whether I have The Coop or not. I just have to pay the people to make the food.

“It gives us a fighting chance to drive revenue and bring in a little cash flow.”

Duke is rolling with the 2020 punches and he notes that people like him who work in the restaurant industry are, as a group, used to unpredictability and instability as its part of their regular workday.

“Back in April, I got asked about the pandemic,” said Duke. “If there’s any business well-suited to this sort of adversity, its ours. Every day things break, staff doesn’t show up, but that’s part of why we love it. That adversity is what makes you good at it. You challenge yourself and those around you and realize everything’s not about money, and you keep swinging.”

The Coop, he explains, is an idea that was based on the amount of delivery business he saw going on at his Union Burger Bar.

“My chef Mark Fasciana of the Social Club had some ideas to do fried chicken, and a few years ago, so did I. The stars were in alignment,” he said. “Ultimately, seeing the amount of delivery we were doing with Burger Bar and realizing this pandemic could go on a long time, I thought, ‘What are we missing?’”

Duke had created Union Sushi & Steak to fill a local need, which he saw as somewhat lacking in Southampton Village.

“I wanted to find what other niche was missing out here — no one in Southampton was focusing on rotisserie and fried chicken,” he said.

The concept for The Coop is a simple one — chicken, several ways, with all the sides like sweet potato fries, mac and cheese, cole slaw, mashed potatoes and biscuits and gravy. Plus, there are healthy offerings such as sautéed Brussels sprouts, roasted broccoli and Caesar or iceberg wedge salads. Also available are crispy chicken breast or barbecue chicken sandwiches, or a fried chicken bowl with mashed potatoes topped by fired chicken, gravy, cheddar cheese, scallions and a biscuit.

“With being a ghost kitchen, we want to have the right number of people working and the right talent,” he said. “If you do six salads and 19 dishes, it has to be refined and there has to be a reason for each item. I think we have a well-balanced menu working around the scope of chicken.”

“Sushi & Steak is a menu designed around the idea of people loving one type of cuisine or another,” Duke said. “It’s the same thing here. You can get fried chicken with all the sides, which is not a health meal. But you can also order rotisserie chicken, which is a healthy option. Most families don’t want the same thing, we’re hitting both the points.”

On the restaurant’s first two nights in operation, Duke noted there were computer issues, so he thinks The Coop put together some 35 to 40 to-go orders serving in excess of 100 people both nights.

Not bad for the first effort.

“I think we can easily get to 100 orders a night, especially once we get to Fridays and Saturdays,” said Duke. “December is a funny month. I think COVID will impact it, but people find ways to see each other, even without holiday parties, people will work harder to get together.”

While initiating a new restaurant venture just as winter is setting in during the middle of a pandemic in a resort area may seem like a questionable business decision, Duke, having witnessed the popularity of take-out at his other restaurants, feels that once January, February and March arrive, so will the big orders, as well as people moving from dining — that is, actively visiting restaurants for an on-site experience — to eating, which is more about looking for comfort food to enjoy in the familiar, cozy confines of home.

“It’s already working. One thing we did is I started marketing The Coop through Union Burger Bar a month ago,” he said. “You’ve got a captive audience hitting it right out of the gate.

“You’ve got to keep trying, especially in a time when people are so fragile. With the highs and lows, it gets better and than worse,” Duke added. “It’s about finding anything on a daily basis that can make you smile, whether a song on the radio, or something to help stay positive.”

Hungry East Enders hankering for their chicken fix can order from The Coop for delivery through Uber Eats, Grubhub and DoorDash, or, better yet, get out of the house and take advantage of curbside pick-up by ordering on the website or by phone. Duke notes there will be daily specials for those who order directly through the restaurant’s website for curbside pickup.

While there is no indoor or outdoor dining, The Coop is available for catering small gatherings and events. The Coop is located at the Southampton Social Club, 256 Elm Street, Southampton, and is open Tuesday through Sunday, 5 to 9:30 p.m. (closed Monday). For the complete menu, visit the website, TheCoopToGo.com.

With winter now at the doorstep and the masses hunkering down for the cold weather ... 30 Nov 2020 by Annette Hinkle