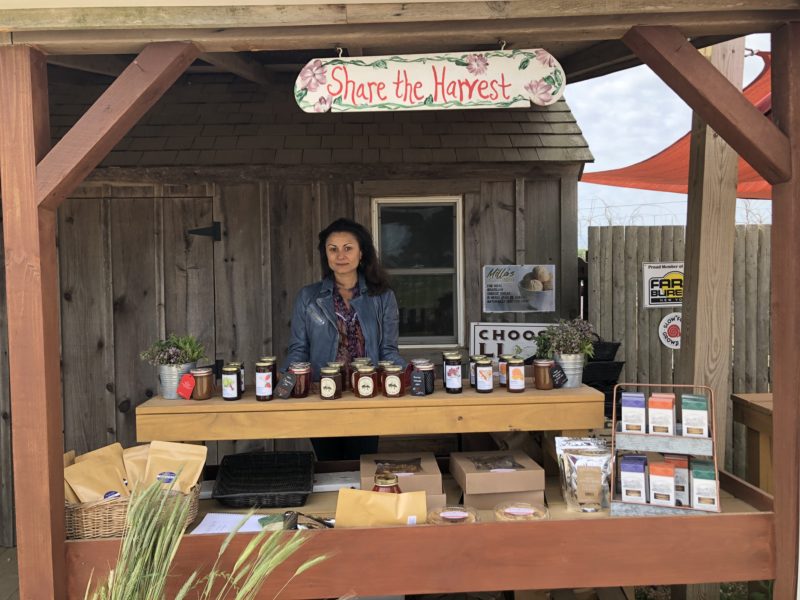 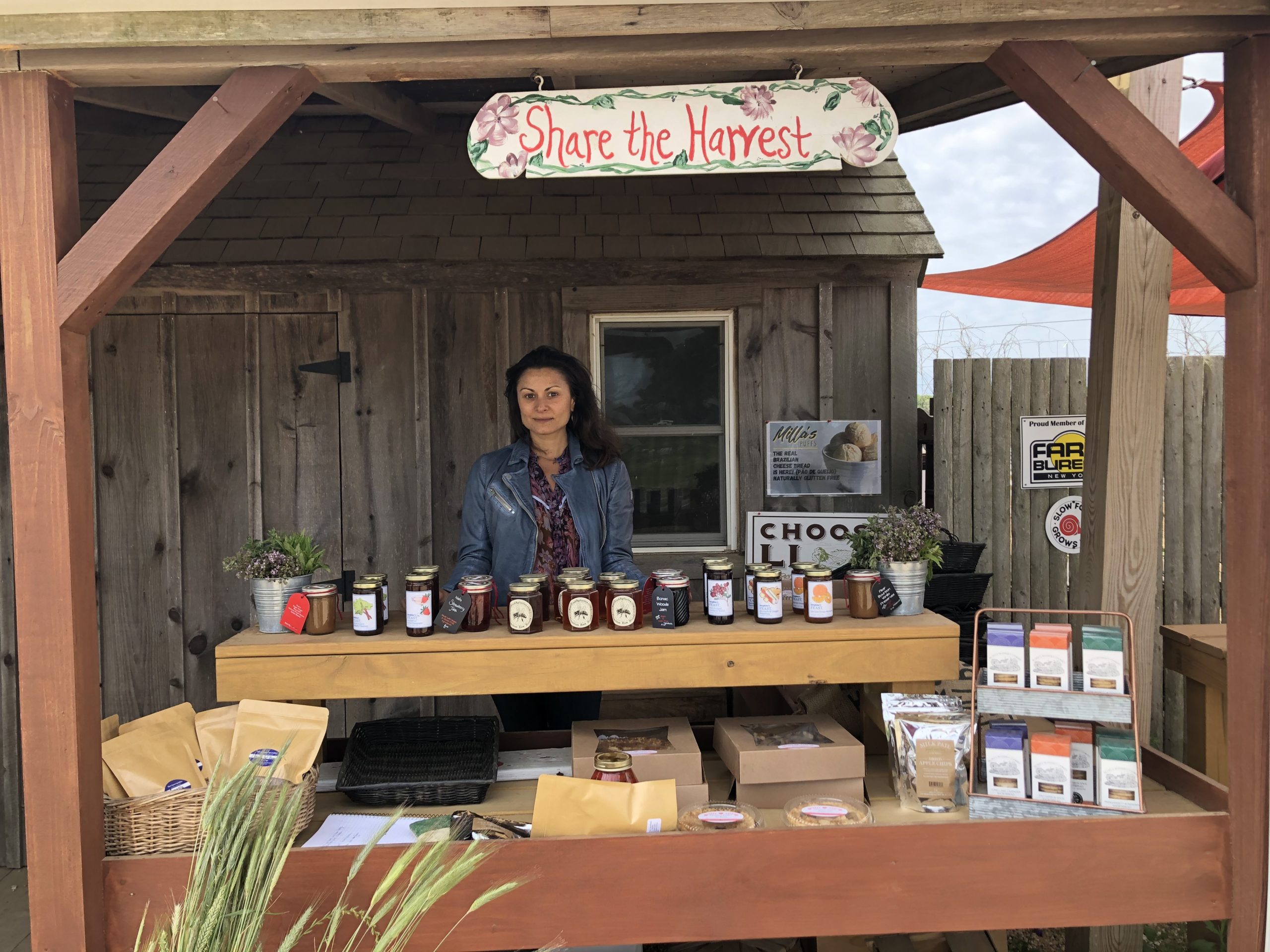 Volunteer Justine Giordano at the EECO/“Share The Harvest” farmstand, which donates 100 percent of proceeds to people in need on the East End. And that’s just one part of how they help the community. 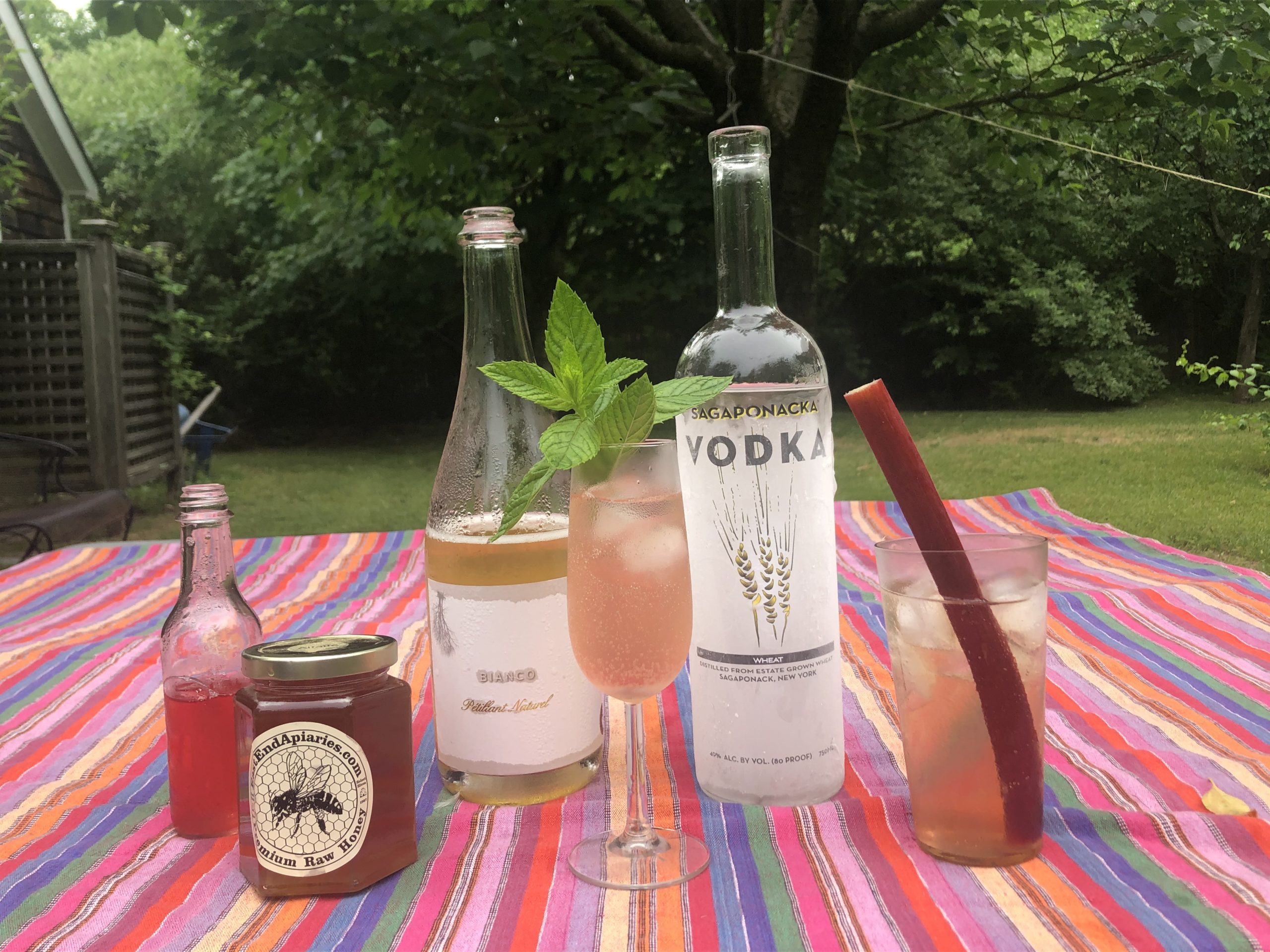 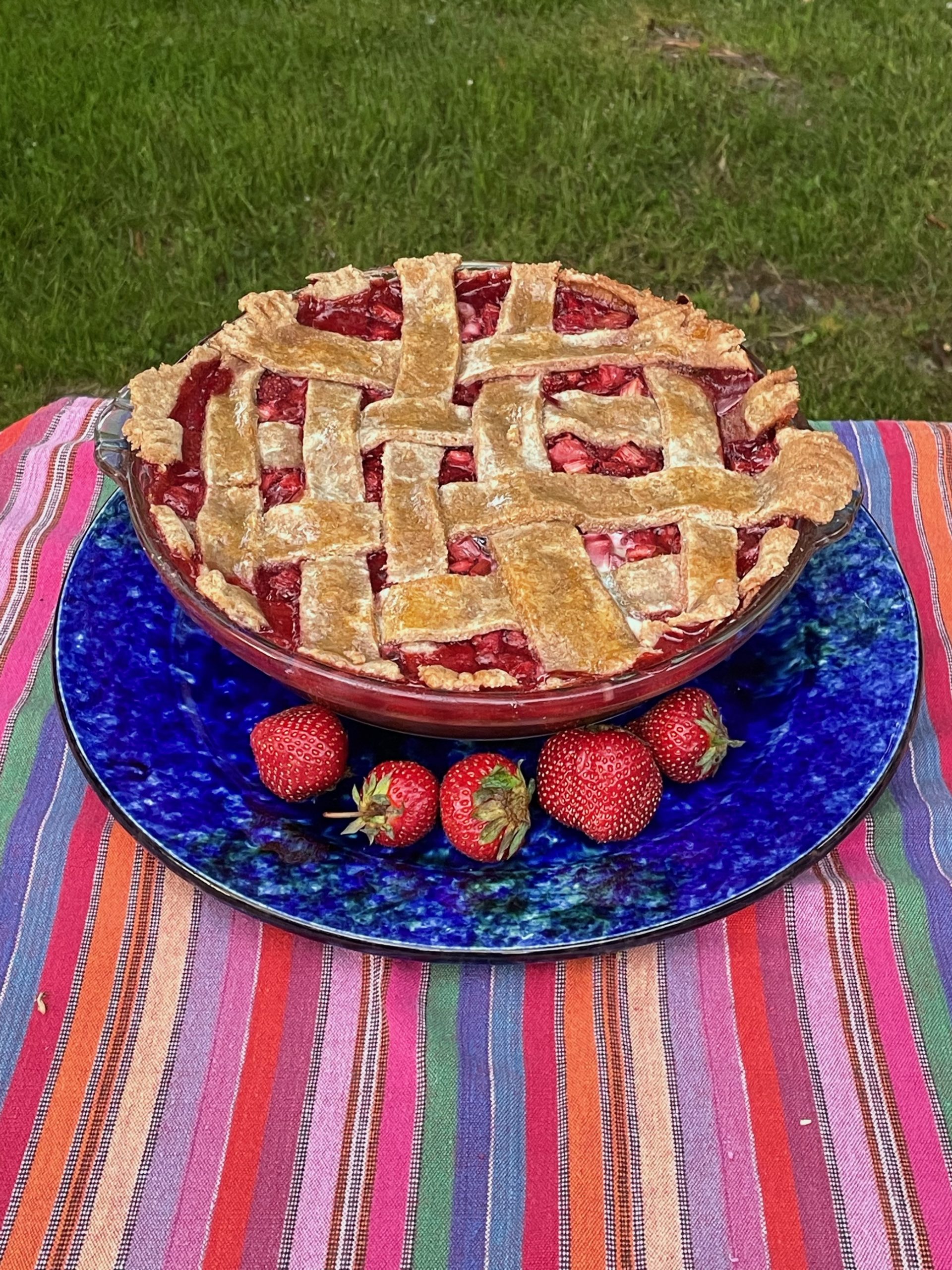 Strawberry rhubarb pie made with all local ingredients, except the cornstarch. (tip: switch sugar out for honey). JENNY NOBLE 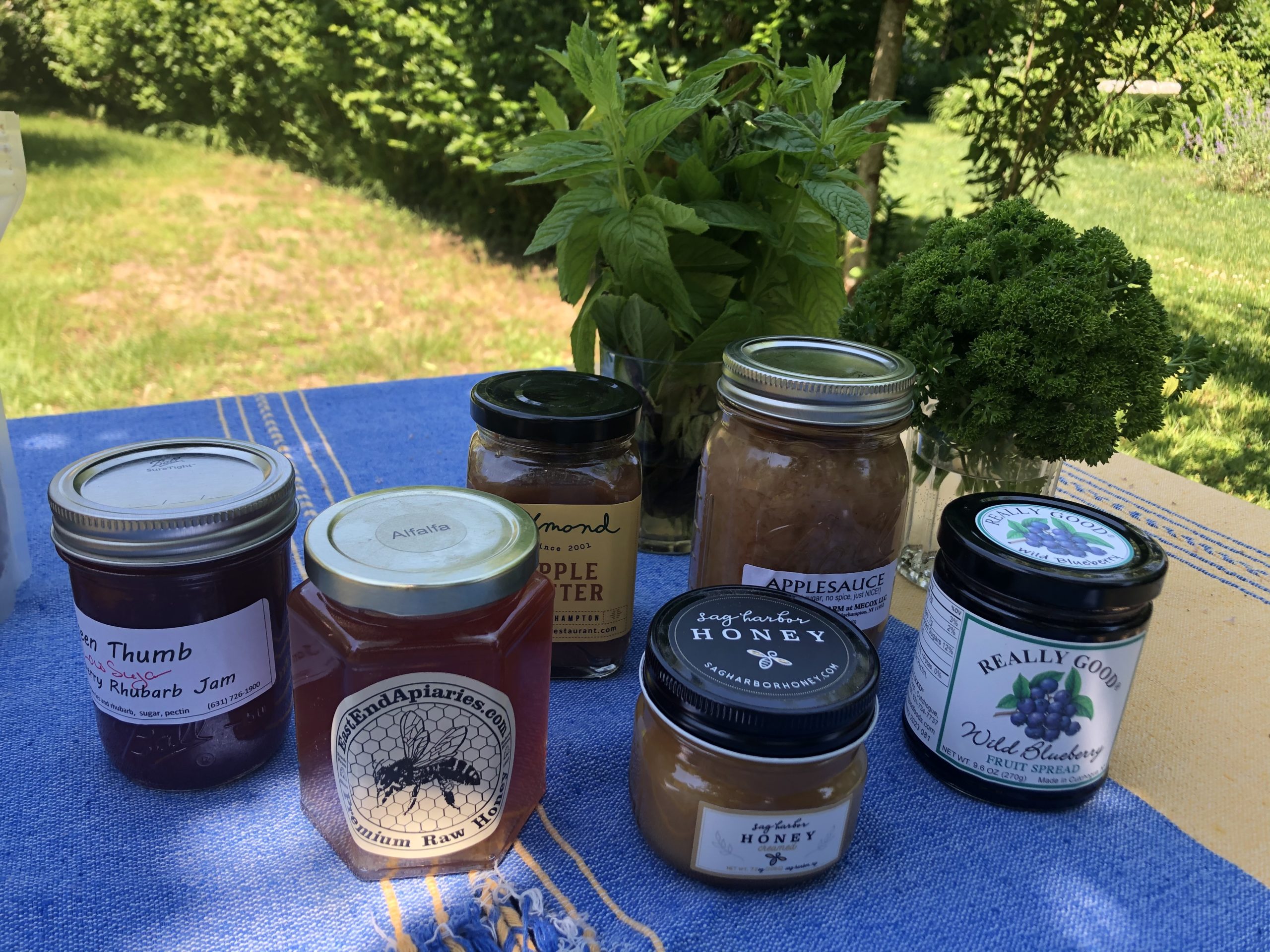 Extend the taste of summer with all that local farmers preserve, jar, pickle, dry, can, cure, and even freeze for winter. JENNY NOBLE 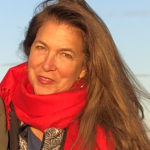 Just because it’s sitting in a wheelbarrow, doesn’t mean it’s local. When I decided to reduce my carbon footprint by eating more local, I had to come to terms with the sad fact that farm stand pineapples are not grown out here. And those pretty packages labeled, “Produit en France?” Probably not either.

Local food is typically defined as being produced anywhere within 50 to 400 miles from point of purchase. By that measure, Montauk Ale is still local, even though its brewed in Worcester, Massachusetts. Phew!

Truly climate friendly food is local, and seasonal, and sustainably grown. When you have these three components, you’re also treating yourself to a healthy, delicious feast.

Why local? On average, food in the United States travels over 1,000 miles from where it’s produced to store shelves, and is responsible for up to 17 times more CO2 emissions than regionally grown food.

A cherry tomato that travels from California is often genetically modified to travel better. It might be “engineered” for thicker skin and to be less juicy so it doesn’t crush easily during the journey. To ensure that it stays fresh, it’s usually picked long before it’s ripe, so it never reaches its full potential in terms of flavor or nutrients. By the time we get this frankenfood, it’s basically cardboard disguised as a tomato.

Compare that to the local cherry tomato that’s plucked off the vine at its peak and almost tastes like candy.

How food is grown has an even bigger impact on climate change than how far it travels. East End farmers usually use fewer herbicides and fertilizer, and employ innovative pest management programs instead of applying pesticides. One creative technique that The Milk Pail uses is to set out pheromone traps that seduce the male insects, which helps monitor and reduce the population.

This healthy soil not only gives us healthier food, but actually helps reverse climate change by capturing carbon. As Woody Harrelson points out in the movie, “Dirt”: enough healthy soil could offset all greenhouse gases on the planet. Crazy, right?

When determining whether the food at your local farm stand is grown environmentally, don’t put too much weight on the label “organic.”

The organic certification is often too expensive and complicated for small farmers to get. Instead, most implement organic methods of farming and use sustainable/natural practices.

My approach to recipes had been to flip through cookbooks until something struck my fancy and then assume that King Kullen would carry it. Everything is in season somewhere, right? Basic rule of thumb: If it’s not in season here and now, it’s probably not local. As you’re standing in front of a suspiciously large array of farm stand veggies, make sure to ask the farmer what they’ve just harvested. The Hamptons Kitchen Cookbook is a handy tool because it focuses on what’s available here on Long Island throughout the year.

Jason Weiner, the chef at Almond Restaurant in Bridgehampton gave me the best advice for seasonal cooking: Make a supply based meal rather than demand based, then ask yourself, “What do I have in front of me and what can I cook with it?”

The Hamptons is the easiest place in the world to be a locavore.

If you love sea bass, it doesn’t need to be Chilean when it’s caught right off Montauk. The variety of fish swimming off our beaches means you should never have to eat perishable fish that has to be flown in by air freight, and is a whopping 50 times more carbon costly even than products being shipped.

The Seafood Shop in Wainscott is selling six different kinds of local fish this month. In the high season, roughly 50 percent of their fish is local.

And for the highest nutritional value, with the lowest carbon footprint, choose oysters, scallops and other shellfish that are available year round.

If you have a hankering for red meat, look no further than Acabonac and Mecox farms, where you’ll find everything from sirloin to burgers, pork and lamb, in a multitude of cuts. Cows at Acabonac Farm live La Dolce Vita. Spared the feedlot life of constant antibiotics and growth hormones, they roam freely on the banks of the Atlantic, eating grass that never uses synthetic fertilizer or pesticides. While beef accounts for roughly 150 percent more greenhouse gas emissions than chicken or fish, we have to give these cows some credit. Their rotational grazing helps build healthy soil, which sequesters CO2, thus limiting the effects of climate change.

In terms of variety, a Hamptons farmers market is a spectacle to behold.

Usually, I like to suggest ways to protect the planet that also save money. Sorry planet fans. Fresh, healthy food, grown on expensive real estate without the scale of mass production or government subsidies, just costs more. Our farmers can’t compete with the $2 head of cauliflower that’s factory farmed in the Midwest and whose seeds are genetically modified by our friends at Monsanto.

So if you’re short on cash, look for half-off bins like the one at North Sea Farms. And always, always, always use as much of the plant as possible.

To help those who really can’t afford fresh healthy produce, look for a farm stand that gives back. According to the U.S. Census Bureau, 10 percent of the population on the East End lives below the federal poverty line. The nonprofit, Amber Waves, distributes the money earned at its market and cafe to running local school programs, apprenticeships and last winter, they donated more than 2,000 quarts of frozen soup to local food pantries.

If your idea of living off the land is booking a reservation, choose a restaurant that chooses local. Almond restaurant is the poster child for how doing right by the planet can be very tasty. Ninety percent of their produce comes from within a 10-mile radius.

“Whatever you have to offload, we’ll use,” says Weiner (not something you usually hear from the chef at a high end bistro). “Orphaned” shishito peppers that nobody wants simply because they’re yellow (which doesn’t change the flavor) find a home on the Almond menu. Bi-catch that farmers markets don’t readily accept are turned into a “Trash fish plate du jour.” which as Weiner says, “might sometimes need a little conversation between the waiter and customer.”

Every little bit helps. If you consider fresh food to be whatever’s still on the hot dog roller at 7-Eleven on your way home from work, remember: Montauk Ale and North Fork Potato Chips still qualify as local. Bon Appétit.

Farrm Wine (farrmwine.com): While only producing two wines a year (red and rosé), they’re North Fork-based, so local, organic, biodynamic and good. Everything you’d want in a wine.

East End Food Institute (eastendfood.org): Look for this label. They support local farmers, vintners and fisherman and the environment.

Iacono Farm (iaconofarm.com): Sells everything from duck eggs to chicken, and homemade breads, pies and great homemade BBQ sauce. (Across the road from EECO Farm on Long Lane in East Hampton).

Frying On A Global Scale

“A great irony of global warming is that the means of keeping cool makes warming ... 19 Jul 2021 by Jenny Noble

The Price Of A Perfect Lawn

Until this long and COVID-y winter is finally over, you are cordially invited to an ... 26 Feb 2021 by jenny-noble

Get Your Next Car In Green

My 2010 Toyota Corolla is what people politely call a beach car, and impolitely call ... 1 Feb 2021 by jenny-noble

Climate Corner: A Q&A With A Higher Authority

Most people know God for his work as a spiritual guide for the last several ... 4 Jan 2021 by jenny-noble

Climate Corner: What The Planet Wants For Christmas

In 1982, my mother had a nervous breakdown that we teenagers probably caused. She announced ... 6 Dec 2020 by jenny-noble

My favorite moment returning home to Sag Harbor after renting our house out has always ... 13 Nov 2020 by jenny-noble