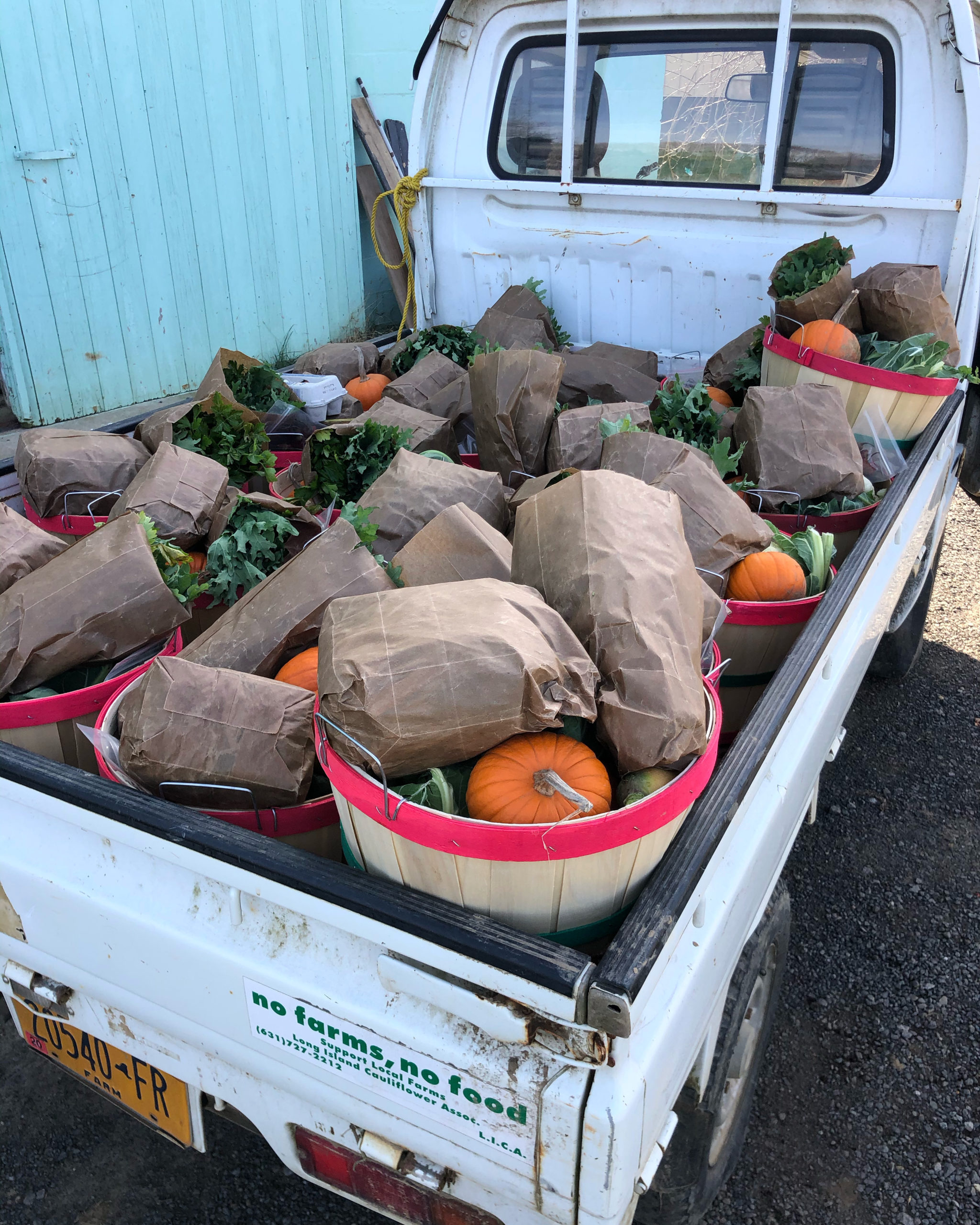 With winter now at the doorstep and the masses hunkering down for the cold weather ahead, it’s an ideal time to consider where to get produce in the months ahead. For East Enders, they can look no further than Marilee’s Farmstand in Sagaponack, which is now offering a winter CSA (Community Supported Agriculture) program.

“This is the second season. We started it last winter and are really excited,” said Suzannah Wainhouse, who manages the CSA and the farm.

Initially, the farmstand’s CSA program began last fall with 40 or 50 participants and ended in mid-January. Then came February, notes Wainhouse, and with it, the COVID-19 pandemic. Suddenly, she found that residents were clamoring for more products from the farm.

“People asked, ‘Do you have more produce?’” recalled Wainhouse, who works the farm with her friend, Ella Engel-Snow. “This is the time when we’re usually resting or seeding or propagating. We had a mild winter and we had collard greens, carrots and potatoes, so we started right then and there and ran the CSA all the way until summer started.

“I feel like it’s been August since February,” she added. “King Kullen was out of everything and people were really frantic. It’s been good for business, but a scary time with tons of people who moved out, and they are still here.”

Unlike many CSAs, which require participants to commit to a full seasonal share, at Marilee’s Farmstand, veggie lovers can decide if they want to take part on a week-by-week basis.

“The premise of other CSAs is you commit to a chunk of time, give the money all up front and the farmer uses that to invest in the next summer,” Wainhouse explained. “I don’t feel comfortable taking a big chunk of money from people, for many reasons, so we decided it would be nice to do it on a weekly basis.”

Here’s how it works — every Monday, Marilee’s Farmstand sends out an email to its mailing list with that week’s CSA offerings. People have until Wednesday to reserve a share, at a cost of $40 per week, and on Friday, the produce is available for pickup at the Sagaponack farmstand from 11 a.m. to 5 p.m.

“At one point in March or April, we were doing 150 to 170 shares. We didn’t know half the people — there was also the frenzy of people feeling like that may not get food again,” Wainhouse said. “We’re now doing 70 or 80 shares. I think we may be able to take on a few more — around 120 — and it’s a service people should know about. An opportunity to take part in something communal.

“It’s a generous amount of food for $40, and an abundance situation — sort of a celebration of what we’ve done all year,” she added. “These are storage crops — turnips, parsnips, potatoes, beets, and ton of greens because all these are grown in the greenhouse.”

Wainhouse says the average CSA share comes with a good amount of food for a family of four and it is distributed in bushel baskets overfilled with produce.

Sounds like dinner is in the bag. The Marilee’s Farmstand CSA program runs through mid-January. At that point, both the farmers and the greenhouses will take a much needed rest for a couple weeks. Then, it will be time to gear up for the spring CSA.

To learn more about the winter CSA program, visit marileesfarmstand.com. Marilee’s Farmstand is at 698 Sagg Main Street in Sagaponack.

Last December, Ian Duke, owner of Southampton Social Club, was in the midst of the ... 8 Dec 2020 by Annette Hinkle