A Game Of ‘Survivor’: The Honeybee Edition - 27 East 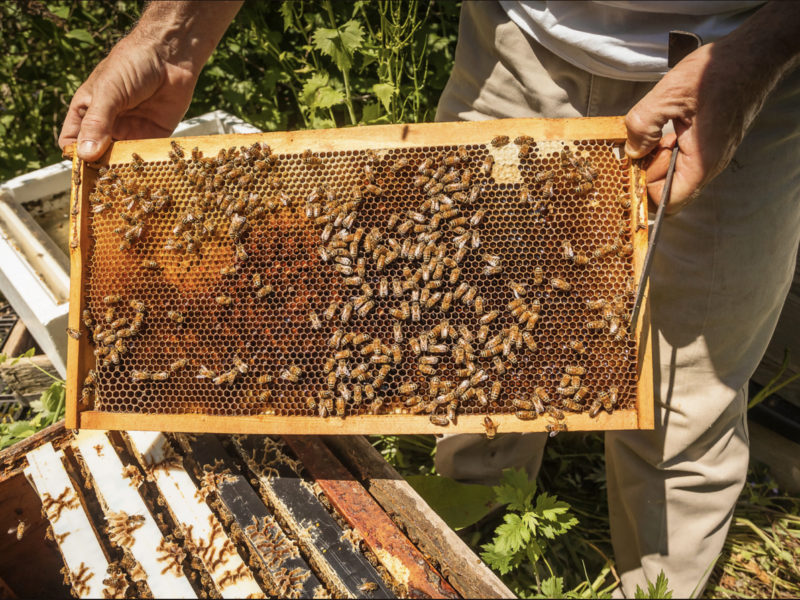 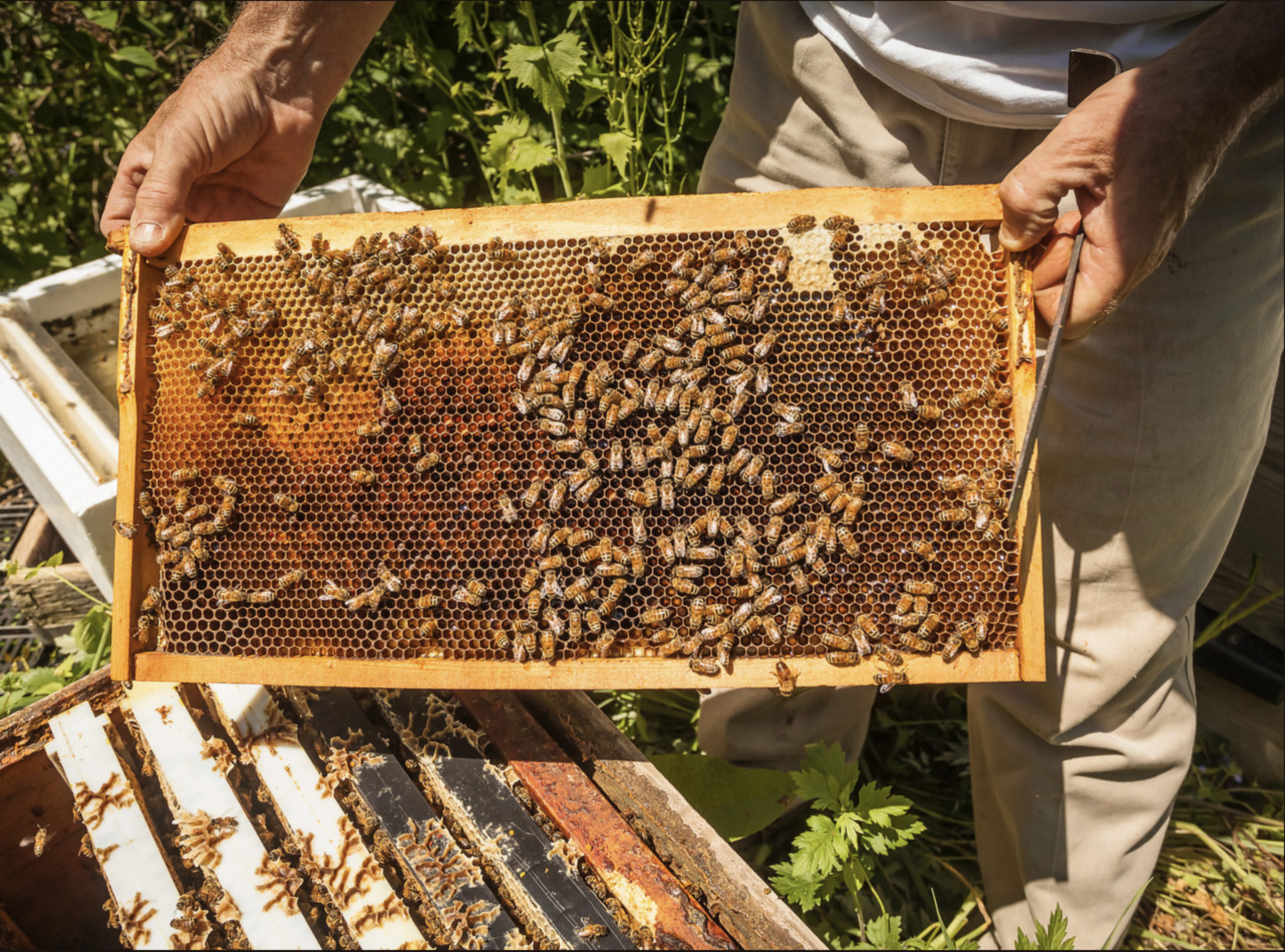 A rack of bees in a newly populated hive. IAN VORSTER 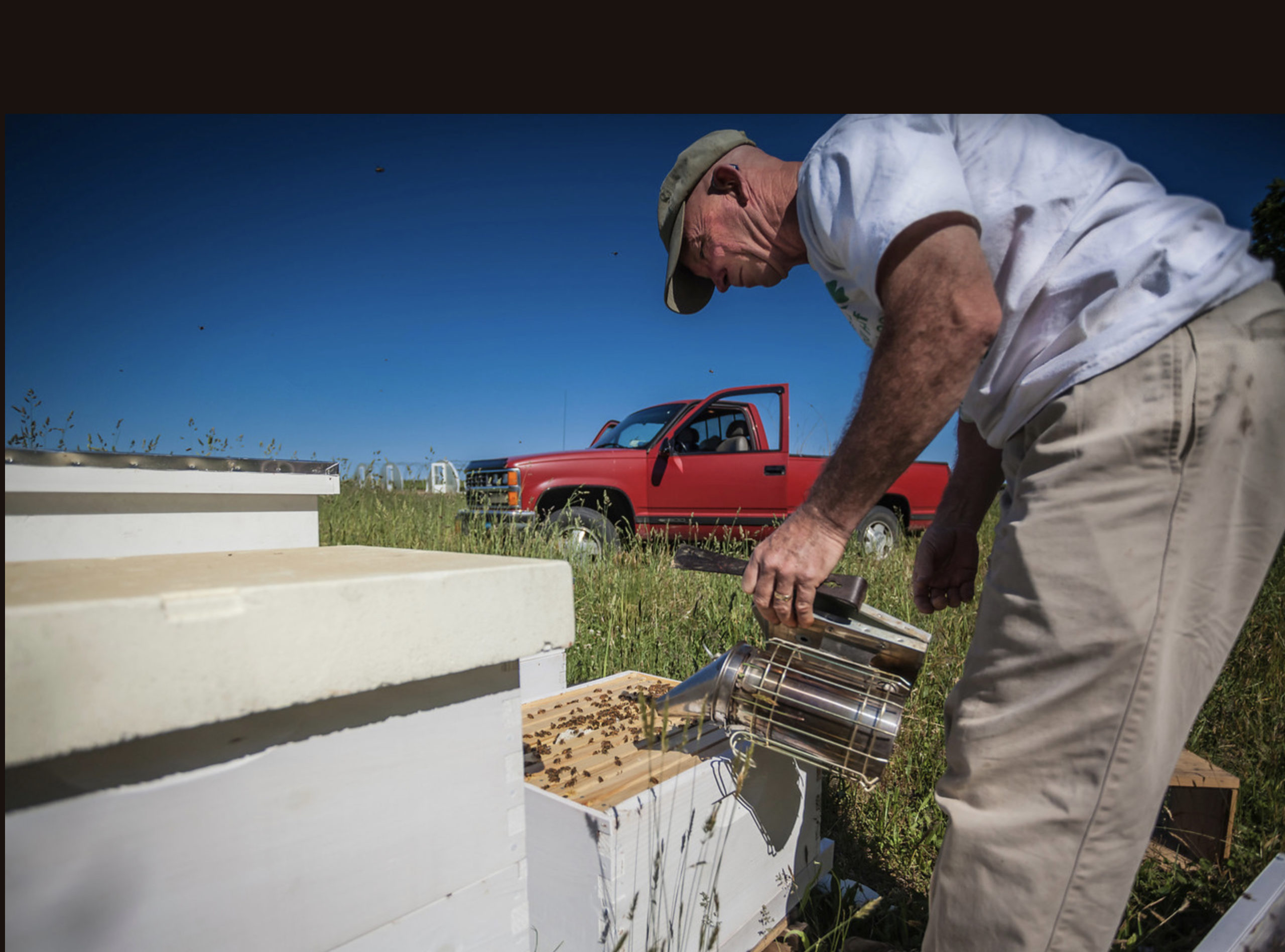 Chris Kelly checking on one of his hives. IAN VORSTER 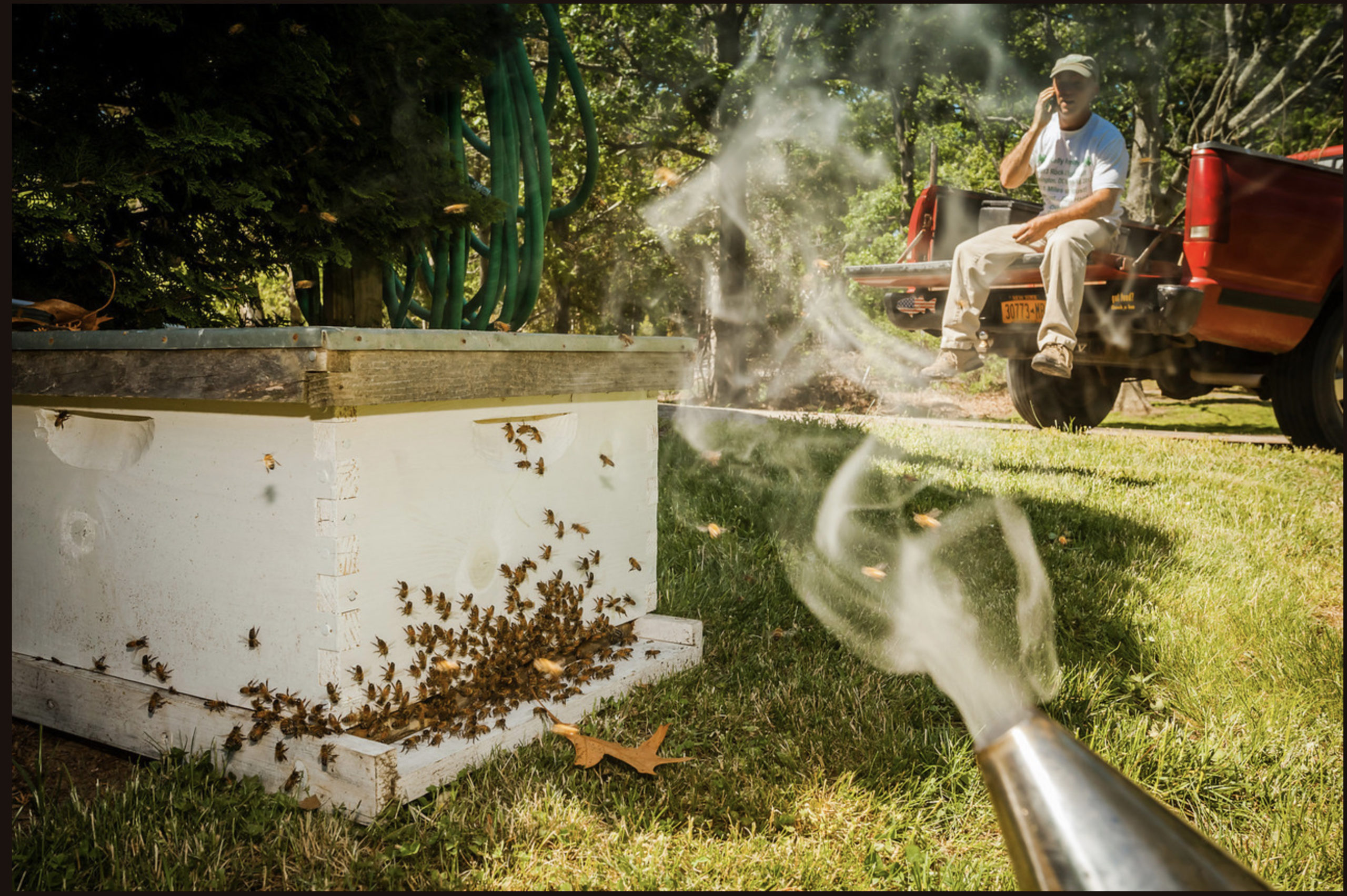 Chris Kelly waits for a swarm to settle in to a new hive. IAN VORSTER

Last September, three of our four colonies packed up and left. I try not to take these things personally, but it’s hard. One day, everything seems fine in a hive and, the next, there’s nothing left but some scraps of honey and fond memories.

Well, fond for me. I guess not so much for the bees, or they wouldn’t have left.

Beekeeping is a challenge at the best of times. Patrick and I went into last spring with four hives of Saskatraz bees, known for their winter hardiness and excellent honey production, as well as a nice temperament that makes them easy to handle. It’s an attractive combination and they seemed like a perfect match for us. They produced more honey than any bees we’ve had before and were generous in tolerating my sometimes-clumsy handling. We were able to extract more than 150 pounds of honey and headed into fall optimistic about the prospect of successfully wintering them over. Then, one after another, three of the colonies left.

There’s nothing sadder for a beekeeper than going out to check on a hive and finding it empty. When bees abscond, they stuff themselves with as much honey as they can hold in their honey stomachs — a second stomach normally used to carry nectar or water to the hive — and use them to set themselves up in their new digs. We continued to see our bees foraging in our yard (yes, I know they were our bees, and no, I have absolutely no logical reason to believe that, nor any way to prove it), but couldn’t find whatever hollow tree or attic where they had chosen to move.

We left a substantial amount of honey in the remaining hive, then fed them sugar water until we were fairly sure they would have more than enough food to get through the winter, bundled them up with a sturdy Styrofoam wrap, and settled down to try and figure out a strategy to make next year less depressing.

Recently, a friend pointed me to Chris Kelly’s website. As the owner of Promise Land Apiaries in Mattituck, Kelly is committed both to bees and to educating people about them. An entomologist with a graduate degree from Cornell University in apiculture, owner of 200 hives and manager of another 150 or so for clients (including six at the East Hampton Airport), Kelly knows his stuff.

So when I saw that his focus is on breeding what he calls “Long Island Survivor Stock” bees, I was intrigued. Long Island, for all its many wonderful qualities, is kind of a tough gig for a honeybee. Ideally, honeybees enjoy a long, warm season with plenty of forage and a consistently cold winter, during which time they stay huddled in a cluster in the hive, keeping the queen — and themselves — warm.

Our weather, particularly as climate change has gained steam, is anything but consistent. On January 29, a blizzard dropped 2 feet of snow in our backyard. On February 4, we hit 50 degrees. The next two days, the thermometer never made it above freezing. The ups and downs are tricky enough for us to navigate; for the bees, they’re nearly impossible. As a rule, honeybees don’t fly when the temperature is below 50 degrees Fahrenheit. They stay inside and cluster. When it rises above that magic number, they’ll venture out to use the facilities and look for a snack.

Wide, sudden variations like we see here mean the bees are going into a cluster, then coming out of it and flying, then going back in again quite often during the winter. All of that disruption burns a lot of energy, so the bees tend to go through their food stores more rapidly than they would if the temps were consistently cold for a long stretch. As a result, many hives run out of food in late winter, before they can start bringing in early nectar. It’s common for beekeepers here to find as many as half their hives dead once spring comes.

Kelly’s main criteria for success — and his decision point for breeding — is a colony of bees that gets through the winter with a low “burn rate,” meaning they consume less food than their peers. “I have come to favor the hives that are very conservative in their rate of burn,” he said. “Whether the temperature is warm or freezing cold, the amount these bees eat is not extreme, and that, for me has become very important.

“This past December, we had several days where the average temperature was above 50 degrees, and I had to add some supplemental feed to some of my outdoor hives,” he continued. “That tells me that they reacted quite strongly to those temperature fluctuations and takes them out of this year’s breeding program.”

He’s also experimenting with keeping colonies indoors through the winter, in an insulated greenhouse, where he can keep the light out and the temperature at a stable 42 to 45 degrees Fahrenheit. This winter, he moved 60 hives indoors on December 1 and plans to relocate them back outside around St. Patrick’s Day.

“The idea is that you put the bees in an almost semi-hibernation state,” he explained. “The darkness keeps them from flying and the temperature moderates pretty close to the ideal, where they eat the same amount of food every year. We’re in our third year now, and it’s very promising. The bees that are inside have consumed 50 percent less food than our bees that are outside.”

Kelly is seeing about a 99 percent colony survival rate, he said — virtually unheard of in beekeeping and significantly higher than the 70 to 75 percent he gets with his outdoor hives.

While keeping bees indoors in a temperature- and light-controlled environment isn’t feasible for the average beekeeper, Kelly said that his indoor bees serve as a control group of sorts. “It’s kind of a counterbalance,” he explained, “a cool way to evaluate how much temperature fluctuations affect the rate of growth in the hive.”

In addition to the climate, Long Island presents other challenges. “A study in Germany found a significant loss of the arthropod biomass over the last 20 years,” Kelly said. “That study actually scared me because insects are our silent environmental health indicator. If you don’t have ants in the ground, you’ve got unhealthy soil. Think about it. You’ve got all this biomass that you don’t see and you don’t think about, but if it’s dead, you’ve got a problem.

“One of the easiest ways to see that here is the way tick control has become such an issue. Any time a parasite or a pest population — ticks, cockroaches, whatever — comes out of whack, that’s an indicator that your environment is out of whack,” he continued. “We are getting very close to what I call a ‘net zero’ situation, where the amount of honey the bees produce in the spring will be equal to or less than the amount of food you have to supplement them with in the fall. Every time a lot is cleared for development, or a homeowner sprays to kill clover and dandelions, that’s less forage available for the bees.”

When asked about my depressing rash of bee absconsions, Kelly conjectured that varroa mites are a likely culprit. “I’ve loved what I’ve seen with the Saskatraz queens,” he said, “but one negative is they tend to rear a lot of brood in July, when we’re in a honey dearth, and that’s not necessarily a positive thing.” Varroa mites lay their own eggs on bee larvae, so a hive with abundant larvae is going to attract more mites.

He asked if I had tested for varroa, and I sheepishly said I hadn’t, although I did treat for it earlier in the summer. The standard method of testing for mite load is to take a clump of bees — 50 to 100 or so — and shake them up in a container filled with rubbing alcohol. The mites fall off and you can count them and do some math to get an idea of how heavy a mite load that hive has. But the bees do not enjoy the alcohol wash, as it kills them — and I just can’t make myself do that to them, because I’m a wimp, as we’ve discussed previously.

Kelly made my day when he told me about an alternative method using a little bit of Dawn dishwashing soap and a lot of water. Apparently, it’s at least as effective at dislodging the mites from the bees so they can be counted, but a quick rinse with plain water ensures that most of the bees survive. I can probably talk myself into doing that, especially if it means I don’t have to spend next fall grieving my lost bees.