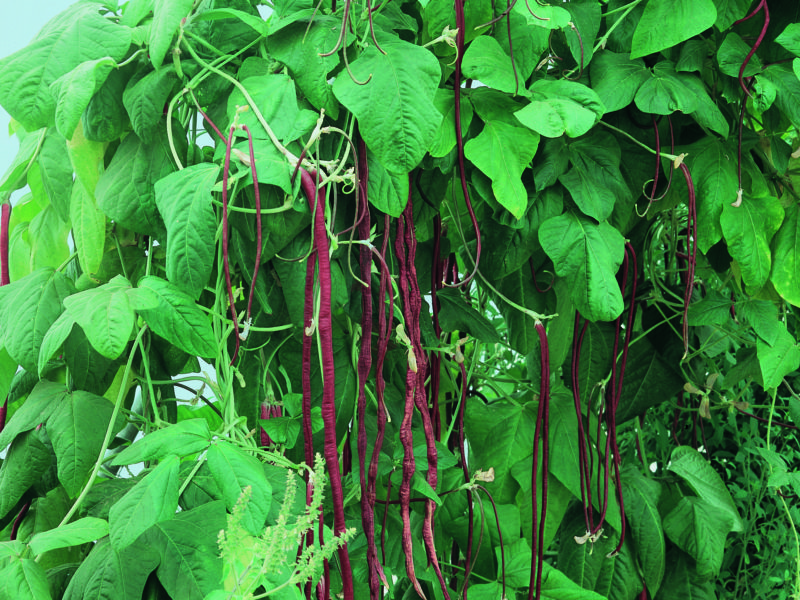 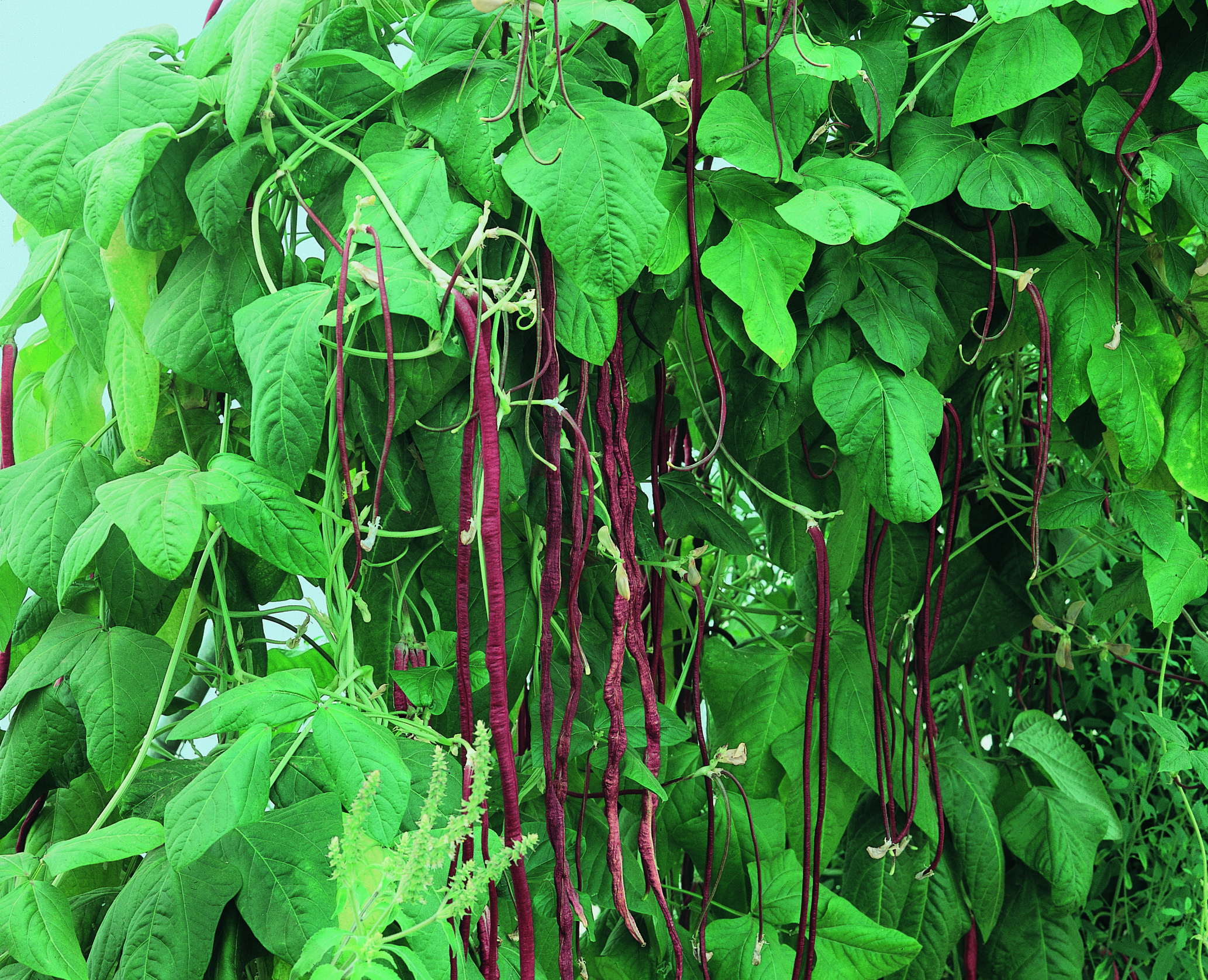 Asparagus Red is a red bean that retains its color after cooking. Maturing faster than Yard Long, this bean goes well in stir fry dishes and bean salads. 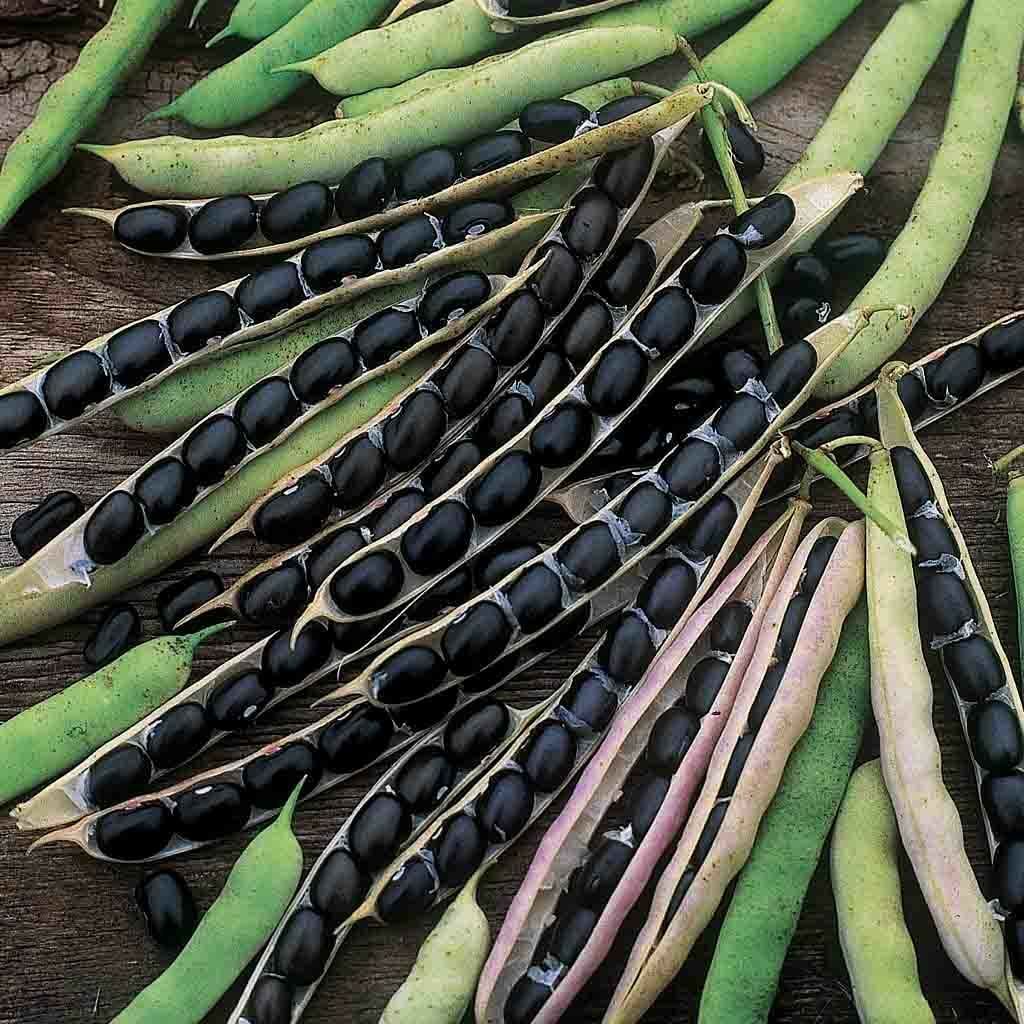 Black Valentine is a bush bean introduced in 1987 and can be used fresh or as a dry bean in soups. The pods are 6 inches long, and the plants tolerate cool temperatures for early and late sowings. COURTESY THE NATIONAL GARDEN BUREAU 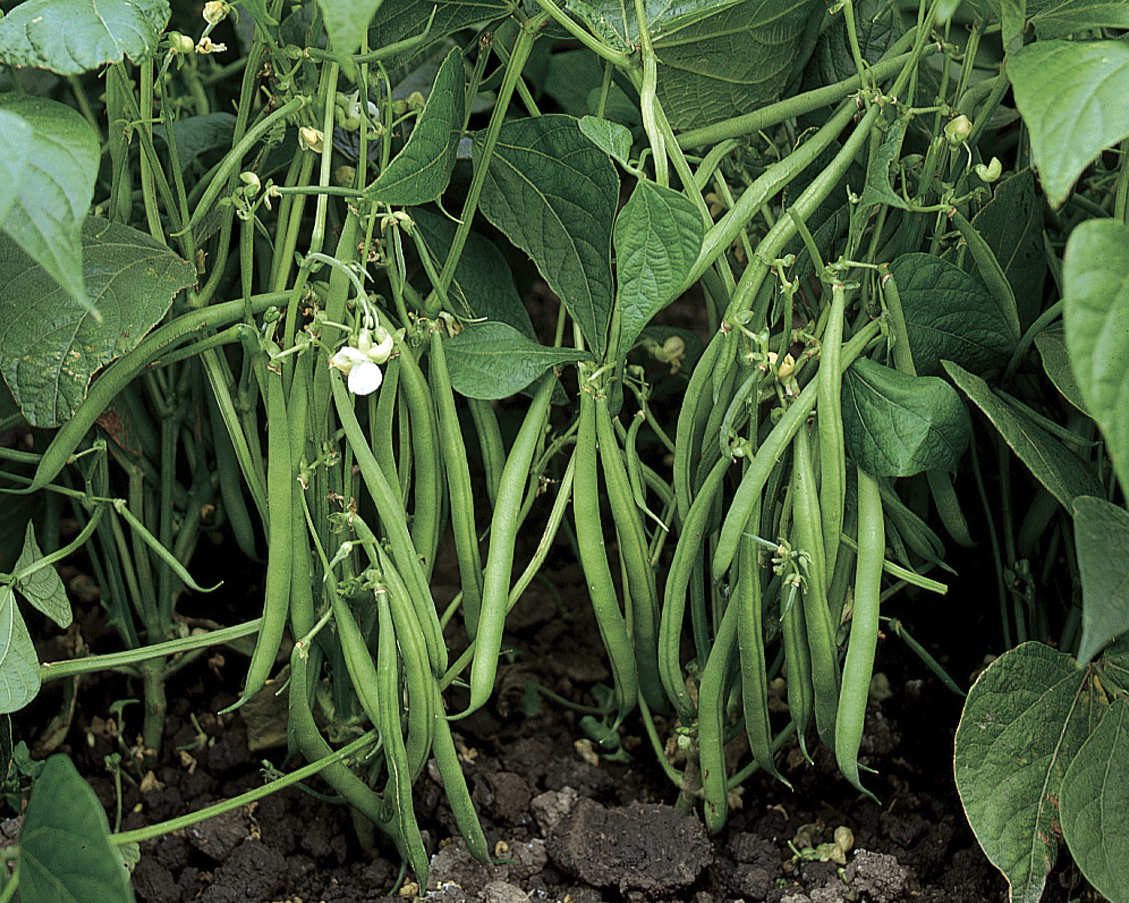 Bush beans like these Jamesons grow close to the ground on bushy plants. This variety has multiple disease resistances with the pods being 6 inches long and the plants only growing to 5 feet long. Sometimes this variety is offered at garden centers in packs ready to plant. COURTESY THE NATIONAL GARDEN BUREAU 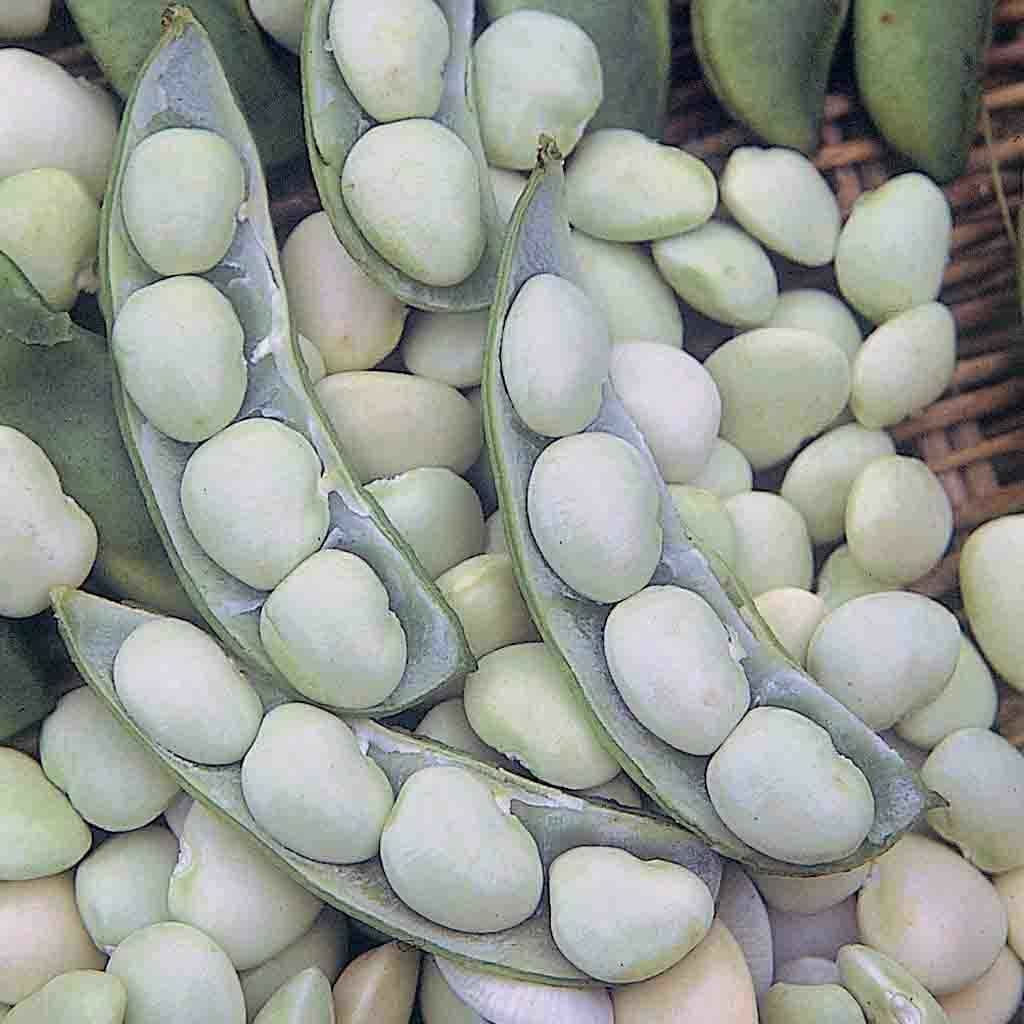 Lima bean Ford Hook 242 is a traditional lima bean. Another bush-type bean, this one has flat greenish-white seeds. Developed in 1942, it does particularly well in our maritime climate in the late summer. COURTESY THE NATIONAL GARDEN BUREAU 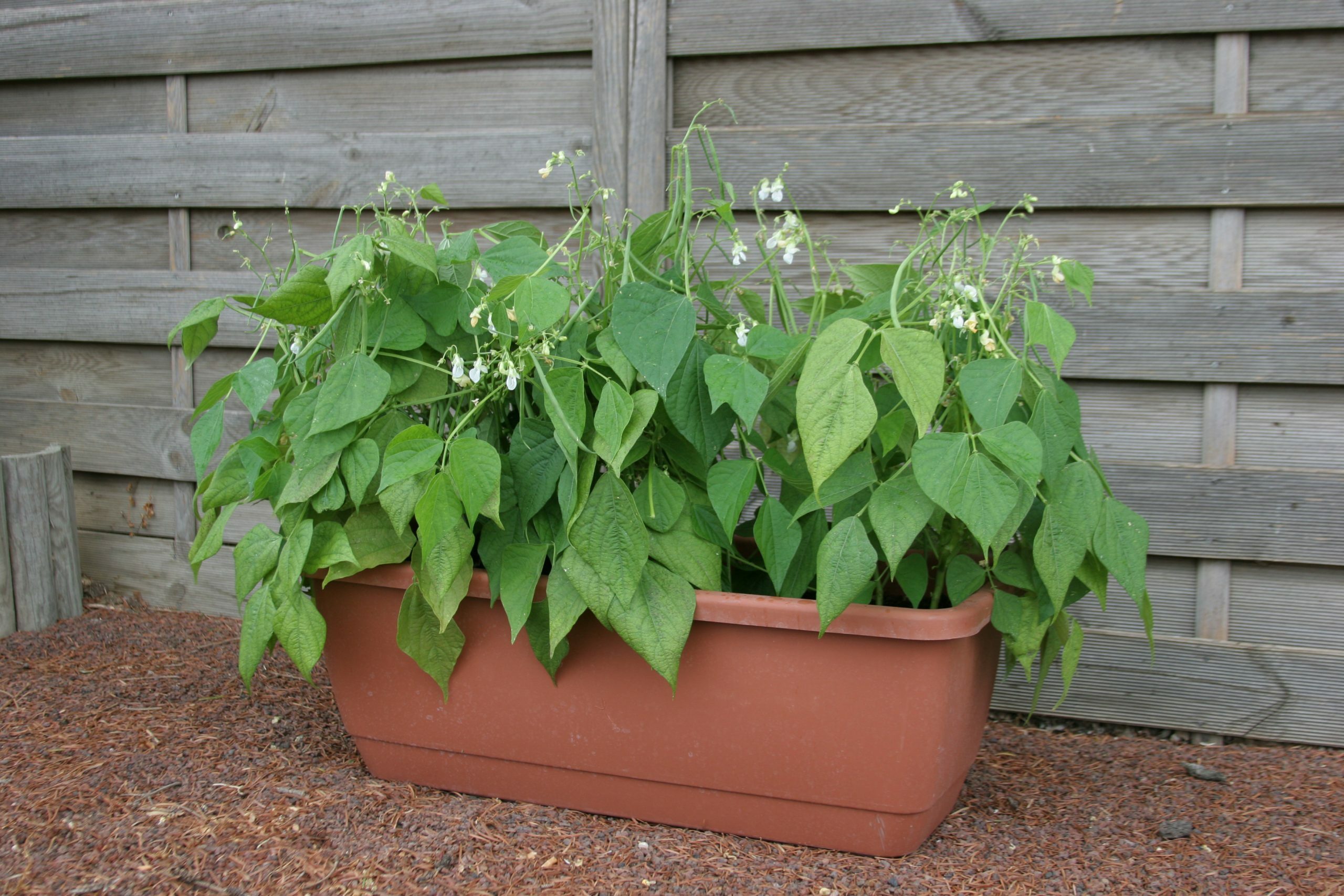 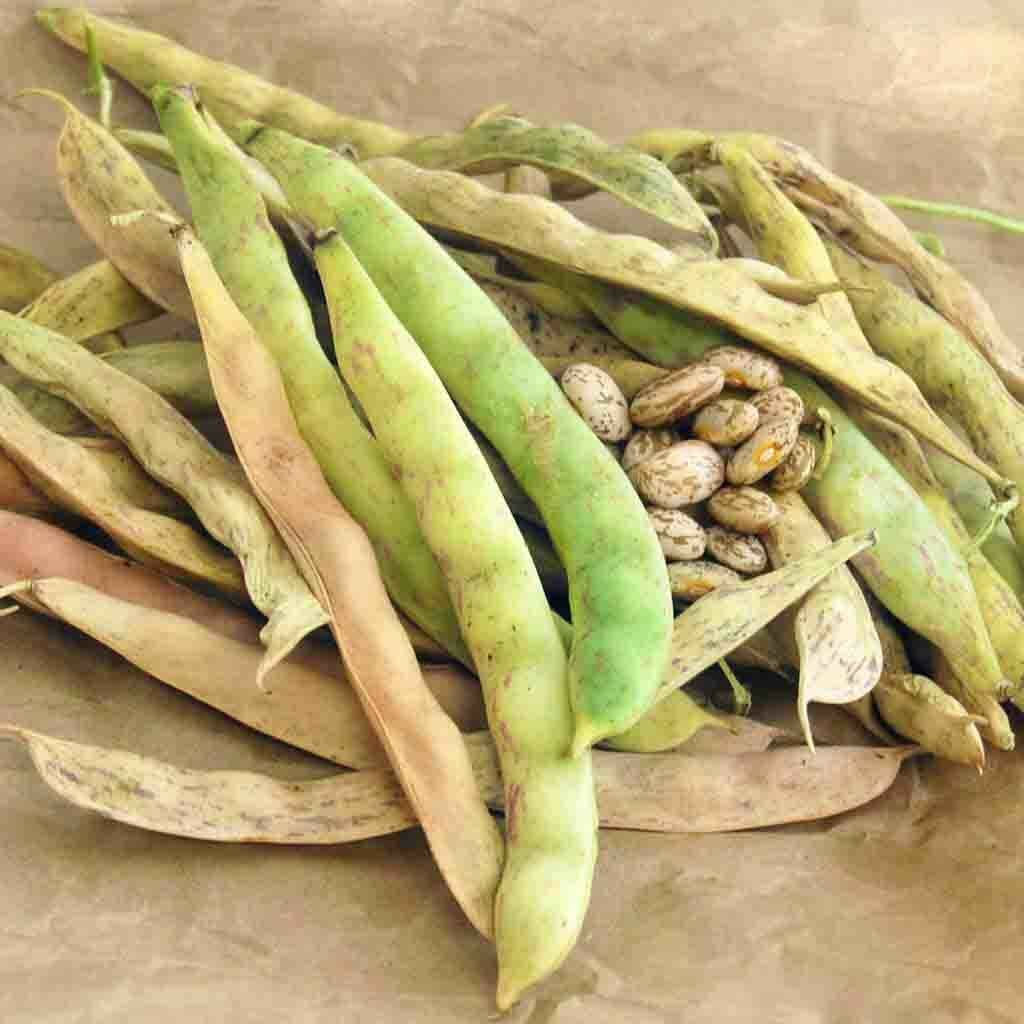 Pinto beans are probably the most popular beans for cooking. They are high in fiber and protein and can be found in refried bean dishes, chilis, soups and stews. COURTESY THE NATIONAL GARDEN BUREAU 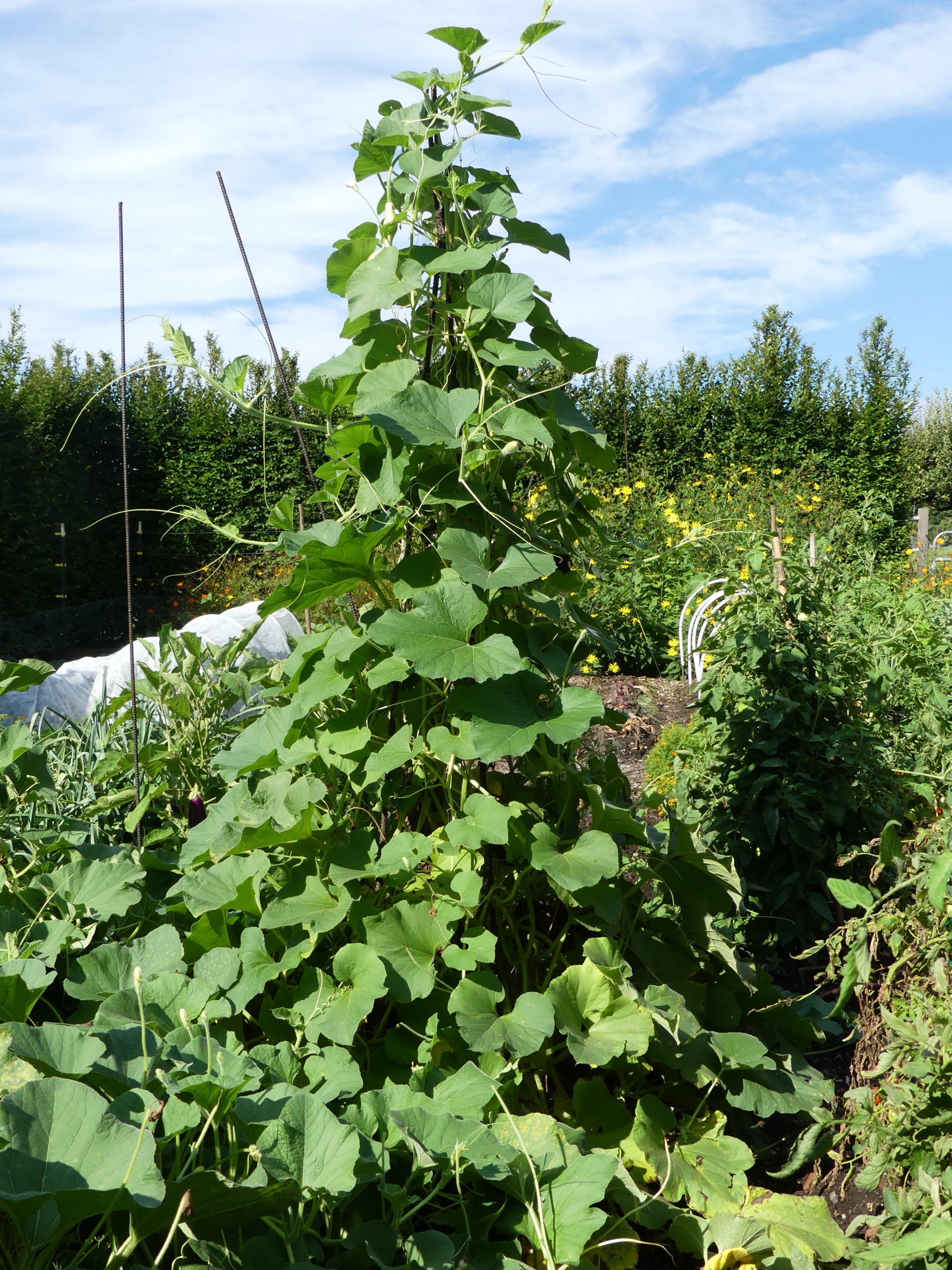 Pole beans are traditionally grown on stakes that form a cone or teepee. These may have been the beans of Jack and the beanstalk. ANDREW MESSINGER

Beans, beans, they’re good for your heart, the more you eat them the more ... the more you want to grow more beans because of all our vegetables these little gems are among the highest in protein and fiber, and I can’t think of any other part of the vegetable garden that can produce a crop that is so nutritious, versatile and good for your health.

What’s more, you can grow beans today, store many of them on the shelf and eat them months later, and some have ornamental qualities on the vine and in a glass jar.

Have you heard of Cutshort, Sulphur or Cranberry beans? How about varieties like Gold Rush, Desperado and Kentucky Blue? Most people haven’t, and in fact, most people who garden aren’t familiar with the majority of beans that are available simply because there are so many. This year a perusal of seed catalogs revealed well over 150 varieties of beans. Planting them starts in mid-May, but they seem to be shunned by most gardeners simply because they don’t know what to do with them or don’t realize how easy they are to grow.

If you’re like me, your bean repertoire probably includes string and lima beans and then comes to a sudden stop. I do have to admit that one of these years I’m going to let scarlet runner beans twine through my garden for their ornamental effect. There are snap beans and limas, which are also called butter beans, and all the beans grown for dried seeds: kidney, pinto, great northern, navy and the like. There are the shirttail relatives in the different bean species: scarlet runner, asparagus beans, winged beans, blackeye, crowder and purple hull peas (which are really beans), garden soybeans, fava or broad beans and garbanzo beans.

You may be among a large group of gardeners who still call snap beans string beans. You still hear this old term, especially in the South and in old farming communities. There’s good reason for this because in the South the bean that was widely grown (and sent north) was Kentucky Wonder, which is an old-fashioned type of climbing bean with strings like shoe laces. Appropriately, family recreation on these old farms included a long sit on the front porch sittin’ and a stringin’ beans. These days, string beans are a rarity. The bean breeders bred the strings out of them, and now a new name is applied to the new generation: snap beans.

While they were at it, the breeders refined the fiber so that you can eat fully mature pods and not have to pick them at the half-grown stage. For this reason, when you finish this article and go out to buy bean seeds, look for the modern stringless snap beans. They are not only resistant to diseases but are also bred to set pods in hot weather — also a new trick. Try a white-seeded variety and then, if you fail to pick all of the pods for fresh use, let them dry on the vine and you can shell out the seeds for bean soup.

Some of the runner types have pods 5 inches long with a half-dozen big, flat seeds per pod. Some of the bush-types have small, fat seeds in nearly round pods. These are called “potato limas,” Some lima and butter beans have speckled seeds, and these have a stronger taste than the white- or green-seeded types.

If you are looking for a dual-purpose plant that can be grown both as an ornamental and an edible, then give the scarlet runner beans a try. Long before the trend toward edible ornamentals became trendy, scarlet runners were being grown for their gorgeous red blossoms and long, dark green pods. The foliage is handsome and the runners can climb up to 12 feet. You’ll see them run up strings to screen porches, and you can stand on the porch and pick the pods. These beans are particularly popular in Europe where the white-seeded varieties were developed. They taste great, and the blossoms area creamy white. Runners are a distinct species and not to be confused with ordinary pole snap beans.

If you’ve never grown shelly beans, you’re in for a tasty treat. These are special varieties that are grown mostly to be shelled out of the pods when the seeds are still moist and tender. Some gardeners call them horticultural beans, and you can recognize them by the red stripes on the pods and the splashes of red color on the dry seeds. What’s the point of shelly beans? Well, unlike other types, these beans don’t have to be soaked before cooking and they cook fairly rapidly. They are especially good when a bit of bacon or ham is added. You can buy bush or climbing types, and it’s a good idea to grow enough to freeze and some to dry and save for bean soup.

Fava, Windsor, broad beans and horse beans are all the same thing. Most popular in northern Europe and the Mediterranean, these beans (of which the best in the United States are grown on Long Island) like it cool and should be started a bit earlier than the others we’re discussing. They may even be started as a late crop in August as they will tolerate the early frosts of October. The plants grow about waist high and have long, broad pods of waxy green color. The dry seeds are flattened and round, like big brown buttons, and used for salads and soups.

The most popular beans grown by home gardeners are the bush beans or the sprinters of the bean family. They come on with a heavy rush, give you three or four heavy harvests, then collapse at the finish line. For this reason, most gardeners plant a second and third crop as the spent vines of the previous crop are pulled out.

Pole beans are more like the long-distance runners. They come on slower but keep on coming, giving harvests again and again. It’s more trouble (actually effort and not necessarily trouble) to put up arbors and tripods to support the climbing vines, but each plant will give you twice as much from the same space as bush varieties.

Finally, the most popular question about bean growing is, “How do I grow garbanzo beans?” and the most popular answer is, “You don’t.” Also known as chickpeas, these round, blond, mealy beans that you find in salad bars or in three-bean salads is actually a commercial bean grown solely in California. It simply doesn’t pay for us to grow them because they are so inexpensive in the store and they take up an inappropriate amount of space in our northern gardens.

So happy beaning, give my regards to Jack, and keep growing

The New York Legislature has passed and the governor has signed S. 854, legalizing the possession, use and sale of Cannabis (marijuana). Sort of.

From a horticultural point of view, the part of the law that interests me is that the law legalizes the home growing of six plants (three mature and three immature) for each household adult, up to two. So, a husband and wife could theoretically grow a total of 12 plants.

You can also store up to 5 pounds of the stuff that you’ve grown. Statistically, though, a mature plant grown outdoors can produce a pound of “usable” flower. That’s a lot of pot. There is some bad news, though. The home growing of pot will not be legal for at least six months and possibly for as long as 18 months while the state board that will control and regulate Cannabis is organized and gets its rules set up. Additionally, the home grower will have to provide adequate security to ensure that those under 21 will not have access to the plants. Much more on this in the coming weeks, but I’m looking forward to a lot of silly deer and rabbits in the neighborhood.