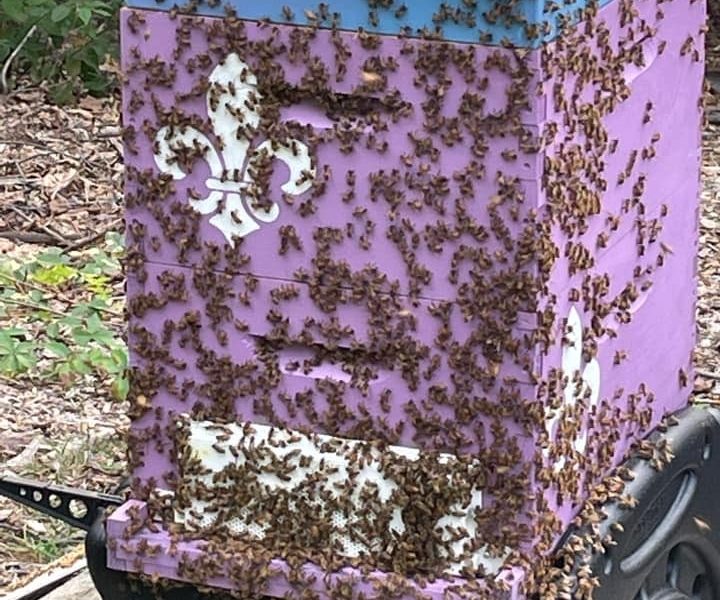 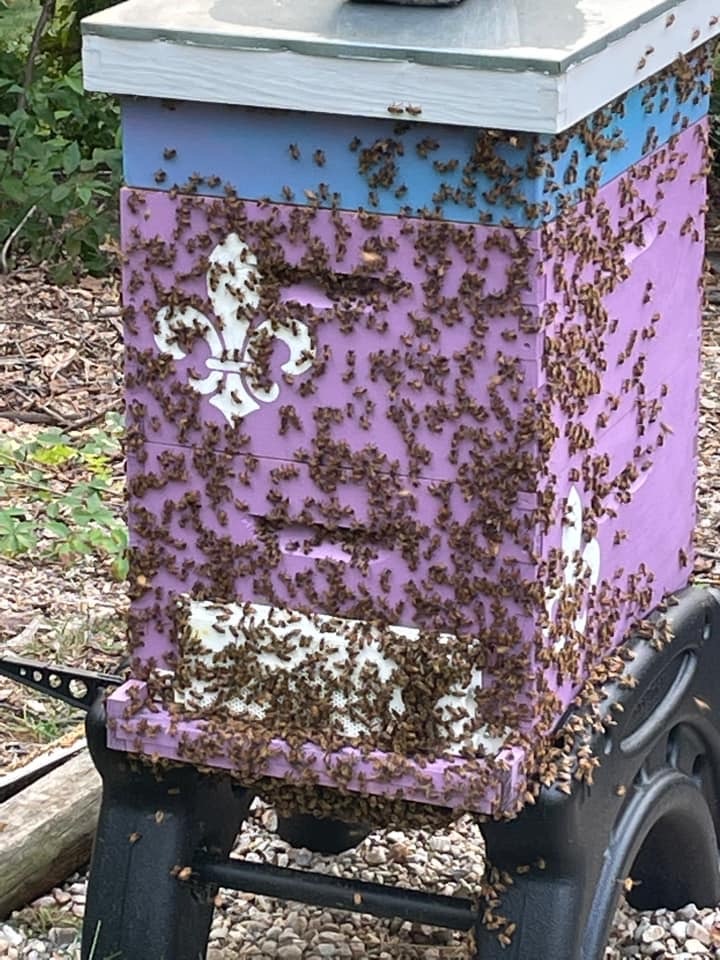 Robber bees trying to get into a hive that’s been closed down. COURTESY CAROLYN MALONEY, @A_BEE_C_APIARY

Robber bees trying to get into the hive through a crack between the boxes. COURTESY STACY SORENSEN HAIGHT 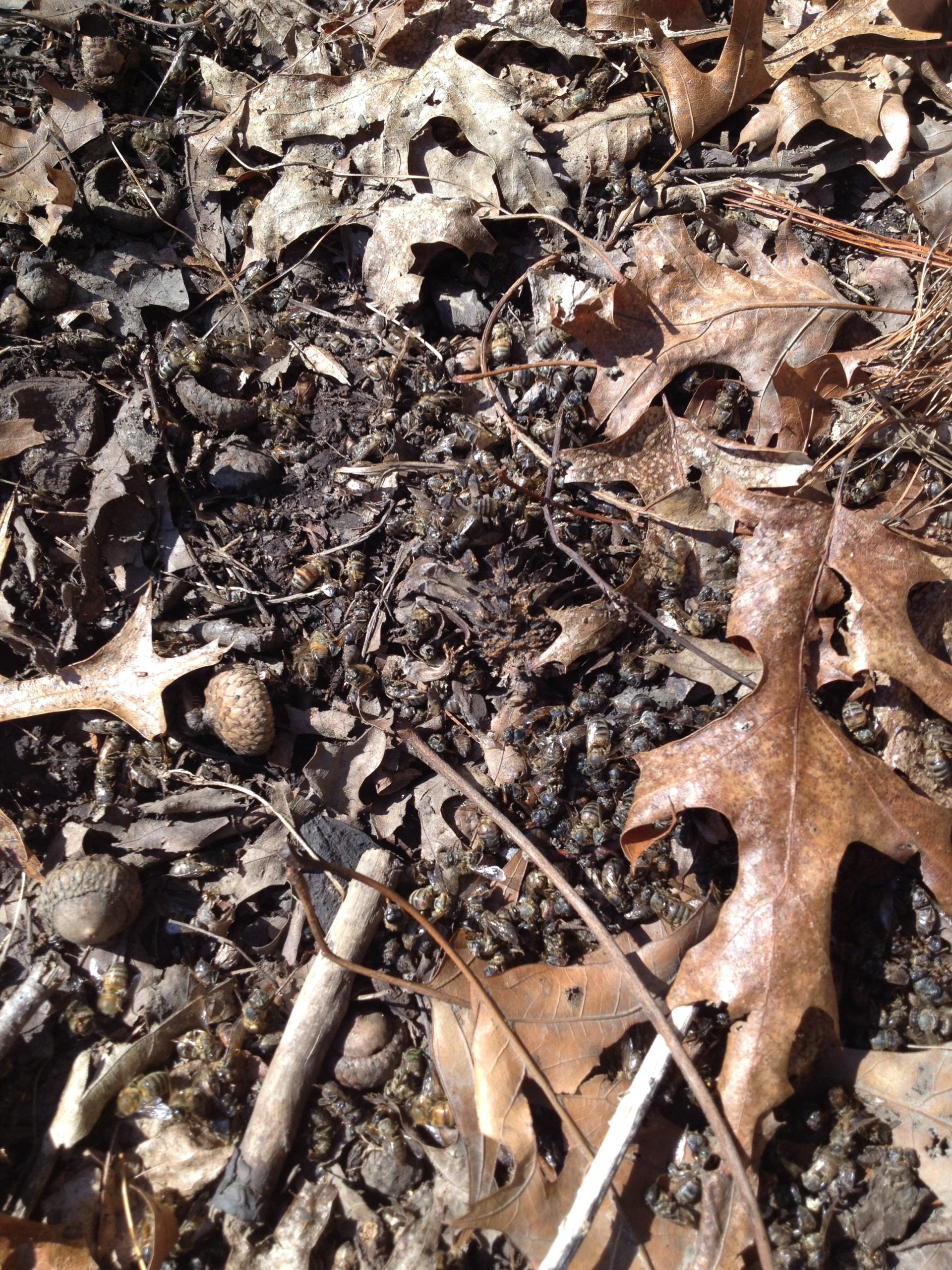 The day was already off to a not-great start, even before the angry bird arrived.

Actually, the trouble started a few days earlier, when I learned that one of my hives — one that had produced a ton of honey this summer and seemed perfectly fine a week earlier — was in trouble. My friend, whose extremely flowery yard is home to two of my hives, called to say something was going on; my bees were fighting at the hive’s front door.

I got there as quickly as I could, but things were already dire. The ground in front of the hive looked like a scene from a horror movie about a mass honeybee murder, and several impressive wrestling matches were going on between bees near the front entrance.

They were being robbed by bees from another hive — something that normally happens when a colony is weak and can’t defend its honey stores. But this one had been healthy and strong, so honestly, I have no idea what happened. Once again, the bees refuse to follow the script.

All I could do at that point was close up the hive entrance so no more robbing could take place. This also keeps the bees who live there from getting in, but the top priority is to calm things down and send the robbers on their way.

I gave them a day to cool off, then went back to evaluate. There were some bees hanging out on the outside of the hive, which I took to be residents waiting to get back in. When I opened up though, there weren’t a lot of bees inside. There was still a good amount of honey left, but no sign of the queen and a mere handful of workers looking sort of bewildered.

My best guess is that the robbing had been going on for a while before we noticed, and the resident bees took the queen and whatever honey they could salvage and headed for new digs. But for the hive to have been vulnerable to robbing in the first place, something had weakened it. I had treated for mites and hadn’t seen evidence of a mite infestation. I had trapped a few small hive beetles, but there hadn’t seemed to be enough of an infestation to cause a problem. There were also signs of chalkbrood, which is when some of the developing larvae get sort of dry and crusty-looking — kind of like chalk. But the internet had assured me that chalkbrood wasn’t a serious problem, just a fungal thing caused by high humidity that would pass on its own. Maybe it was just a combination of small things that pushed the hive over the edge.

Whatever the cause, I was looking at a dead hive. I brushed the rest of the bees off the frames at the door of the other hive, hoping they’d be taken in as refugees. I put the three hive boxes in the back of my truck. My plan was to store them in a chest freezer — three days in the freezer would kill off any mites or hive beetles that might still be causing trouble, and then I could use the frames next spring, giving a new colony a head start with pre-loaded honey and pollen.

Great plan, except I have the attention span of a fruit fly, so when I got home, I did not immediately take the bee-free boxes into the house, but left them in the back of the SUV. With the window open. When I remembered a couple of hours later, the bees in my yard had found the boxes and were having quite the party taking honey from the frames. I moved the boxes onto the front porch and left the bees to do their thing, figuring that once it got dark and they retreated to their cozy hives I could bring the boxes inside and put them in the freezer. But I didn’t.

I remembered them early in the morning — early enough, I thought, to beat the bees to the boxes. I was wrong. Clearly, I have some very ambitious bees who had decided to get an early start. As soon as I brought the boxes inside, bees started flying out of them and buzzing the kitchen windows. Now we’re not talking hundreds of bees, maybe 50 or so, but, you know, they’re not great house pets. Also, our new puppy seems to think they’re airborne snacks, which doesn’t work out well for him or them.

They weren’t at all aggressive, just sort of wondering how they ended up inside. I caught as many as I could and put them out the door, but that left a couple of dozen up by the skylights and flying around, so I opened all the windows to give them an easy way out and retreated to my office to get some work done.

An hour or so later, mid-Zoom call, something crashed into the side of my head. The projectile, a round little bird with serious attitude problems, perched on the windowsill in my office and glared at me. It struck me — pun intended — that a bird just like this one must have been the archetype for the game “Angry Birds,” with his tiny round body and clearly annoyed demeanor. He paused for just a moment to let me know he was not amused, then flew back off and out one of the open windows. Or so I thought.

I realized I was wrong when my husband was home having lunch and Angry Bird whizzed by him, just as I was telling him about my morning adventures with the birds and the bees. The man is scared of virtually nothing — except birds in the house. He grabbed his lunch and hightailed it out to the garage while the dogs and I chased the bird, which finally found its way out an open window.

About 20 minutes later my next-door neighbor texted to tell me a small bird had just crashed into her window, knocking itself out. She sat on the porch with it until it came around, glared at her and flew off. I have no proof this was the same bird, but …