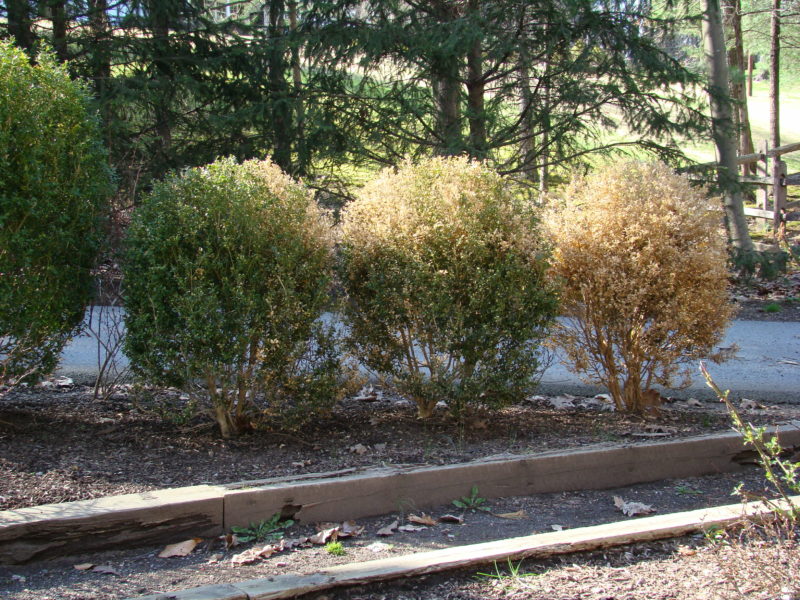 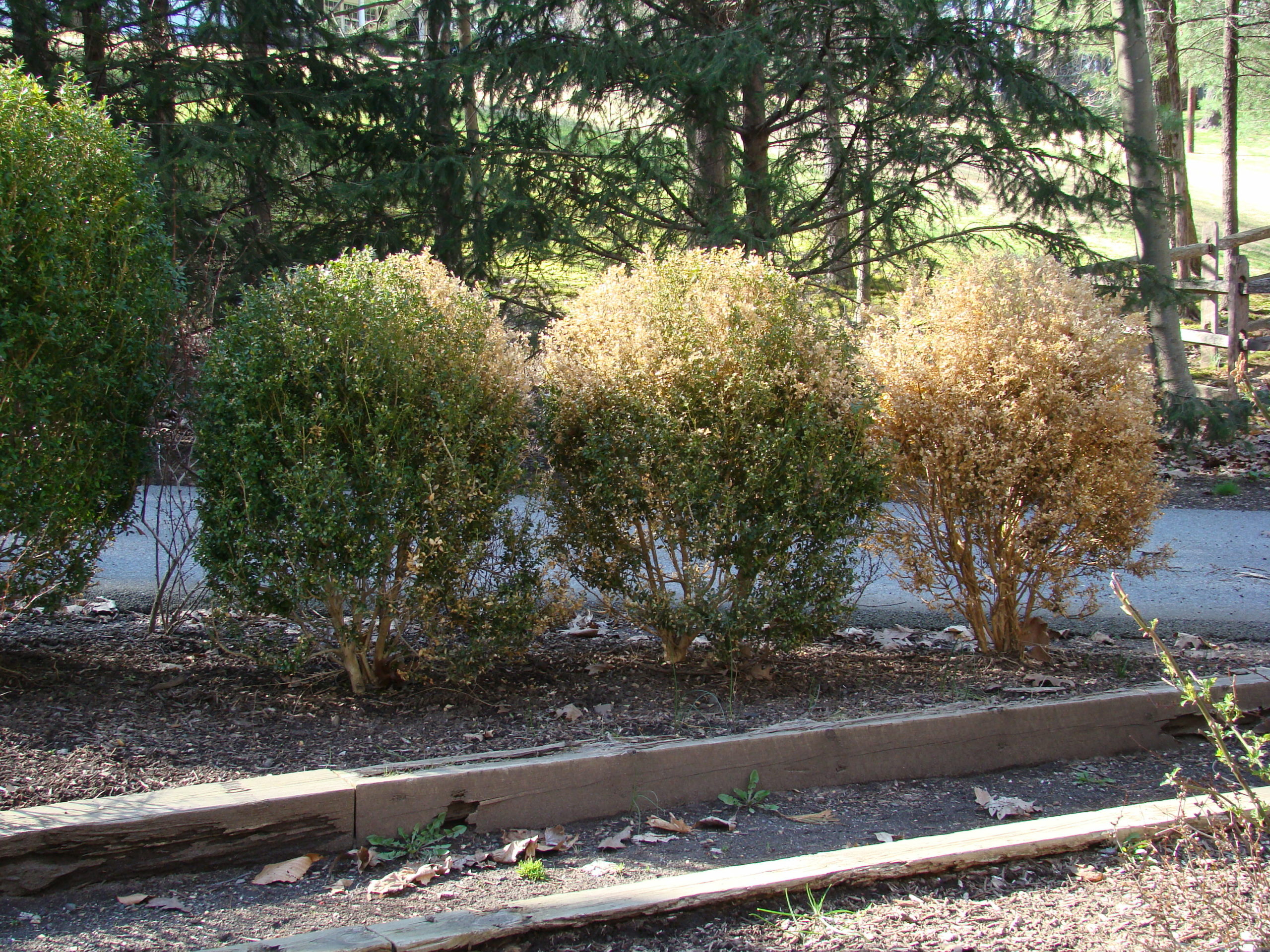 This winter damage showed up in the spring. It’s not from cold or wind but road salt applied to the highway behind the shrubs. The clue is that the most damage was done to the shrub closest to the highway and the least on the one farthest. 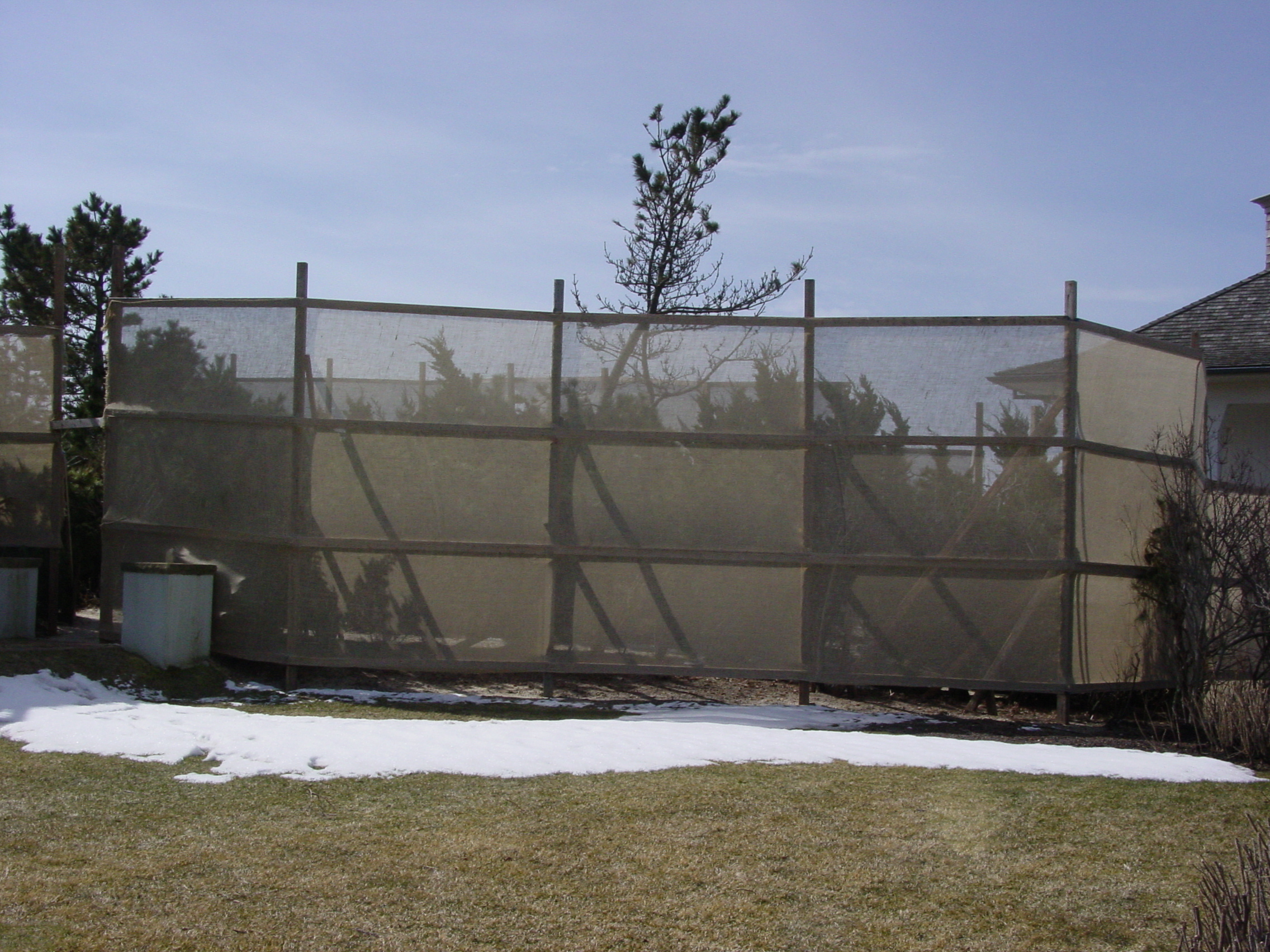 Cold, snow and ice are only a few other winter issues. Strong, dry winds from the north and west can desiccate and burn many evergreens. These screens are installed early every winter to deflect the wind and reduce the winter damage. 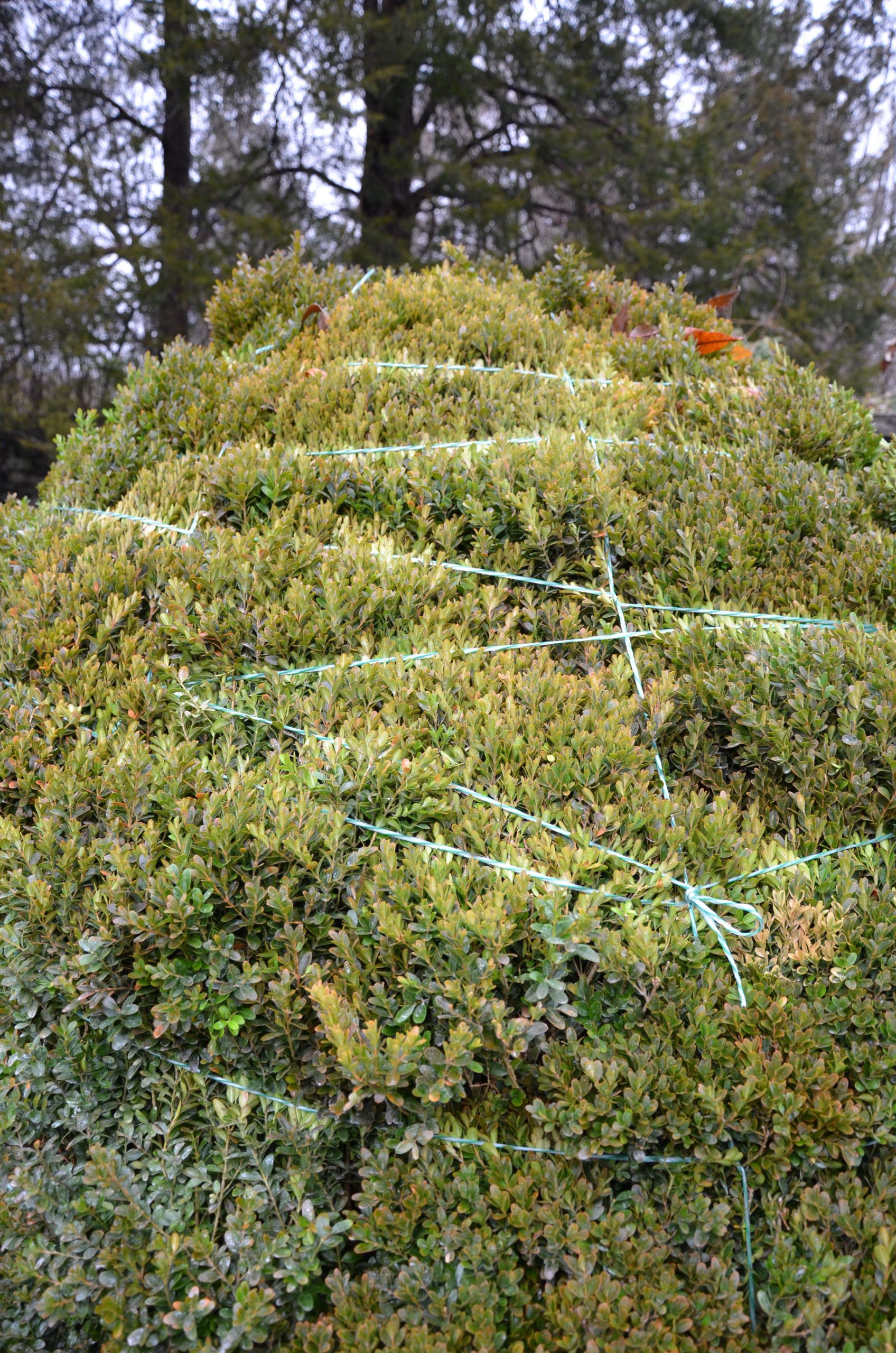 Boxwoods can get some winter protection by being tied and bundled like this one or enclosed in burlap. The question is, does this exacerbates any boxwood blight issues? 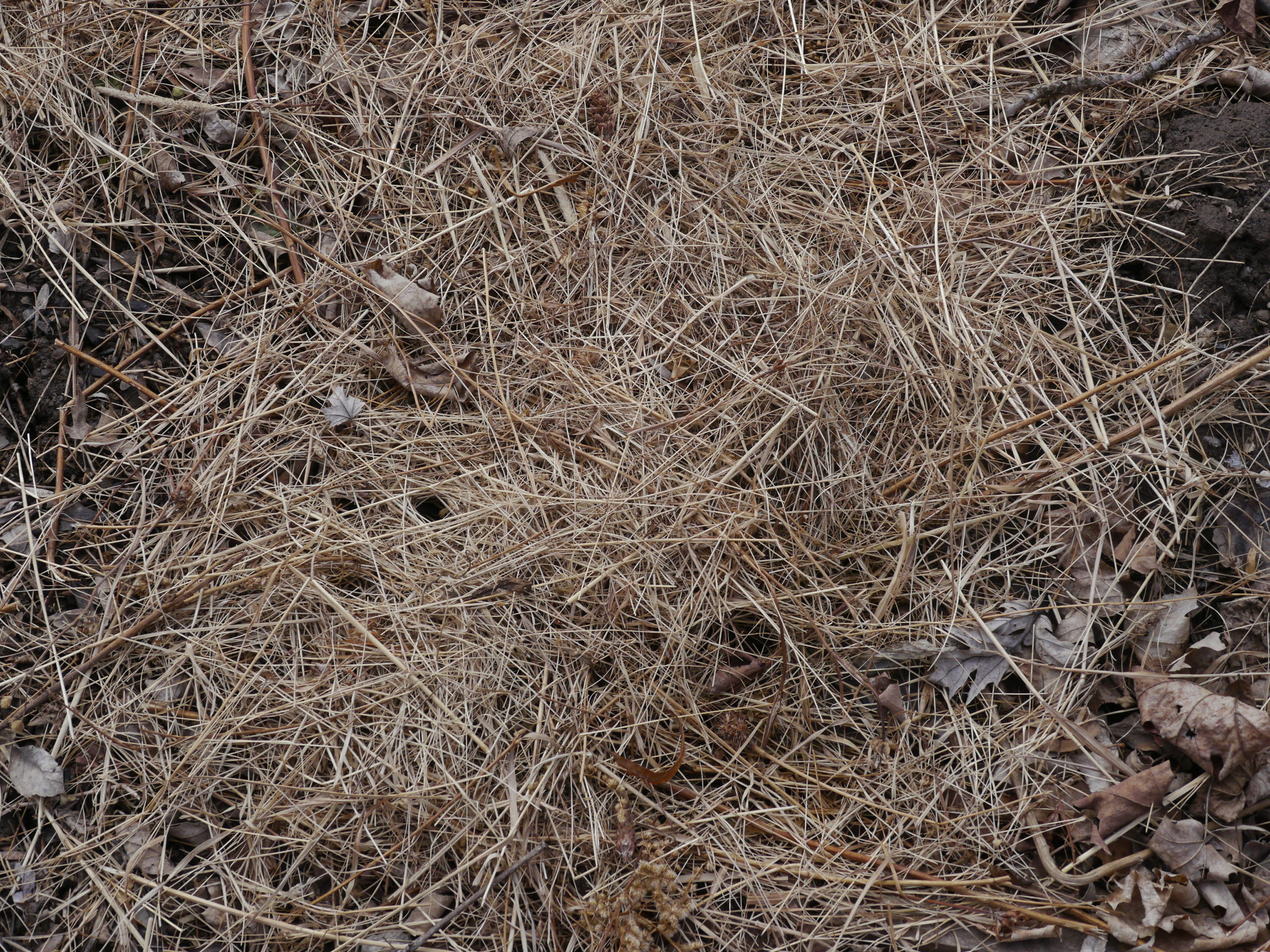 A light application of salt hay in January will protect the digitalis and primulas from wind and off and on freezing soil. But if mulched too heavily, the plant crowns can rot. 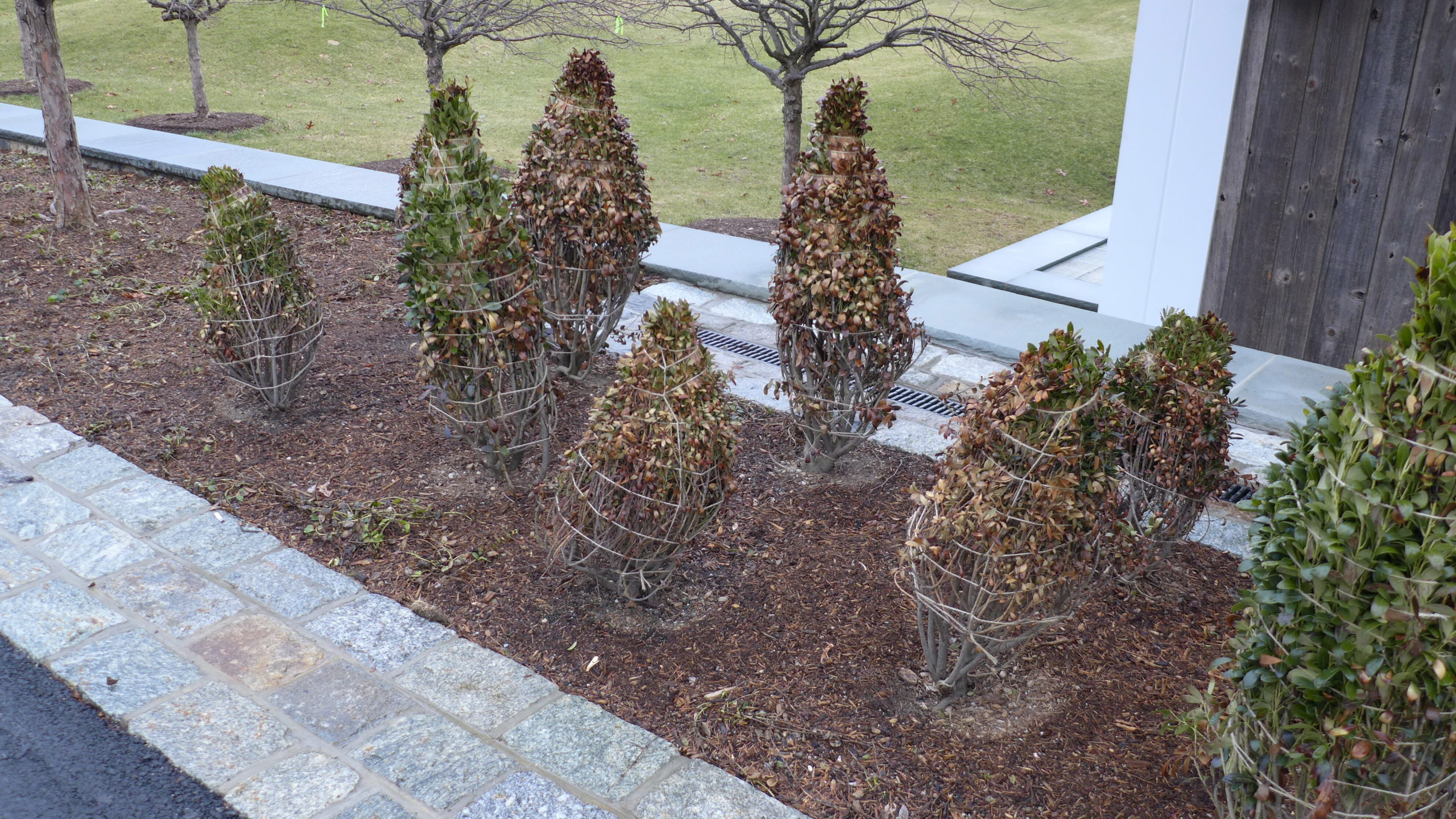 These fall-planted shrubs were tied to protect them from winter desiccation as they are semi-evergreen. Most of these plants died though, because while the shoot system was bundled, the soil totally dried out and the roots were killed. 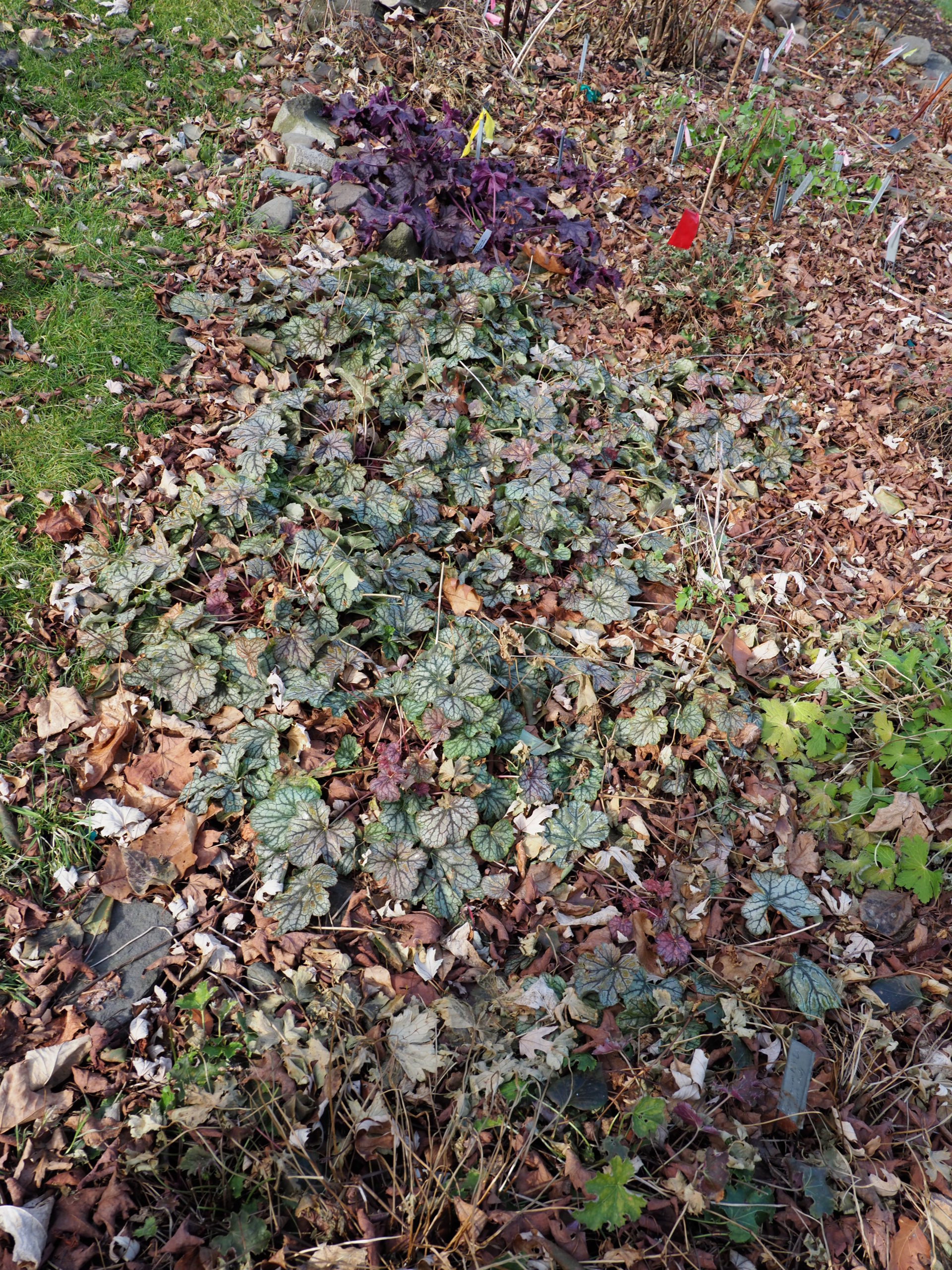 In December these Heuchera are still showing a bit of color and vitality. If mulched now they will rot at the crowns. Let nature take its course and harden the plants off, then when the ground is frozen, they can be lightly mulched. 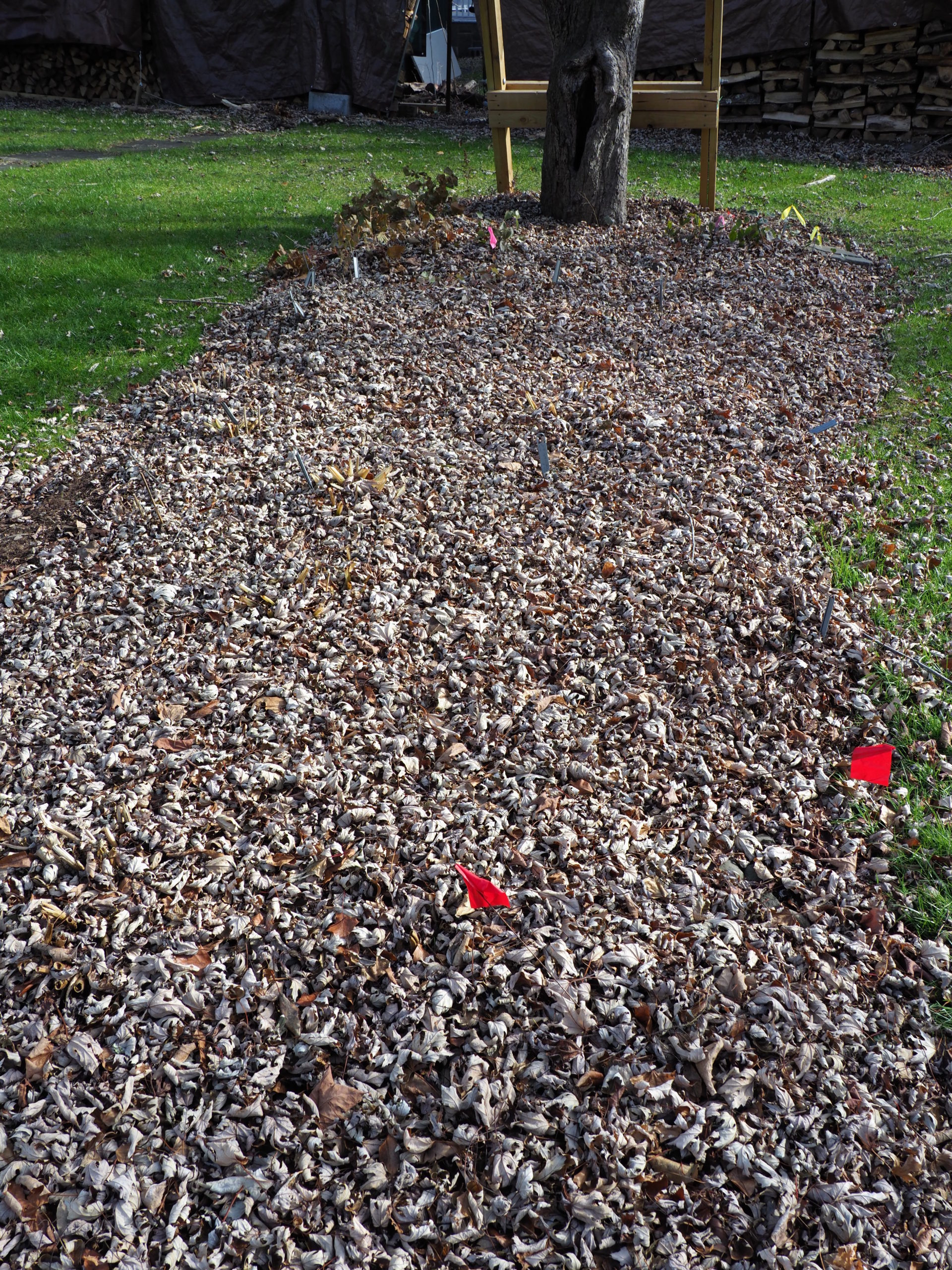 This is the south end of a long perennial island that contains hostas, primulas, astilbe and Epimediums. It gets its winter mulch in January or February depending on how early it gets frozen. The mulch is a combination of various maple leaves from the surrounding trees but to increase the air circulation the leaves weren’t shredded, just hand applied.

Winter always comes late to the East End, and for some, that’s just fine. For gardeners, it means an extended season of getting everything ready. Inevitably it will get cold, it will probably snow and there will be ice. Are you one of the complacent ones, a quintessential procrastinator, or are you getting ready?

One of the things you should not jump the gun on is winter mulches, especially if you have beds with shrubs and perennials. Winter mulches have a special role and when they are applied too early incredible damage can result. The damage usually happens undetected until spring when plants you swear were there are gone and many of the plants that remain are girdled and gnawed to the ground. Many may have rotted while some may even pop right out of the ground.

Winter mulches have one purpose only and that’s to keep the soil temperature stable and cold. Without this mulch — in a winter with little snow and lots of sun but still plenty of below-freezing nights after milder days — plants become subject to the freeze/thaw cycle, which can pop poorly rooted plants out of the ground. A winter mulch, which should only be applied when the ground is frozen, is intended to keep the sun from warming the soil only to have it refreeze at night when the solar gain is gone and night soil temperatures can drop well below freezing. A winter mulch is essentially a temperature stabilizer.

Many plants don’t adapt well to this freeze/thaw cycle, and their crowns can be irrevocably damaged. When the mulch is applied to a frozen soil and the mulch is applied to the right depth (no more than a couple of inches) the soil remains frozen for days to weeks even if we get a good winter thaw. Heaving is reduced or eliminated, and the plants remain stable in the soil. This is even more important with marginally hardy plants and bulbs. You may notice when purchasing these plants that there is a note with them advising several inches of mulch. Again, ONLY when the soil is cold or reliably frozen.

But — of course, there’s a but — winter mulches can also be so very inviting to voles. Unlike other garden rodents, voles are active all winter. This means they are not just moving around and looking for sources of food but they are reproducing as well. Remember, voles are not tunnel makers like moles, which are not winter active. However, voles love to move about under leaf litter and mulches where they are unseen by winter predators like owls and hawks.

This is one of the reasons why winter mulches are applied late. This discourages the voles from setting up home and feeding sites because you’ve supplied them with the perfect cover. It’s also the prime reason why you should be trapping voles right through the winter as their populations will continue to increase as will their feeding.

Another thing to keep in mind is that winter mulches should never be brought right to the trunk or crown of shrubs and trees. This provides the perfect situation where the voles can get up close and intimate with fruit trees where they will feed on and strip the bark of apples and pears just at the soil line. They also adore quince and will girdle and damage these shrubs in a flash. Rather than mess with repellents, which are dubious when it comes to voles, simply keep your winter mulches at least a foot from the crowns and stems of susceptible plants. And keep trapping.

Most iris and peonies tend to be super hardy and rarely need winter mulching. New gardeners often make the mistake of mulching these plants simply because they can see tiny new growth on the peonies and the horizontal roots of the iris right at the soil surface. Resist the temptation; don’t mulch these. On the other hand, you may find that some hardy lilies (Lilium, not daylilies) call for several inches of mulch. In this case, always apply a vole repellent as a soak (like Bobbex-R) prior to mulching.

And what do we use for winter mulching? Years ago we used salt hay, which was harvested along the Jersey Shore. This practice was not and is not ecologically sustainable, and as a result, the acreage where salt hay can be harvested has been dramatically reduced and the cost of a bale of salt hay is prohibitively expensive.

Pine needles make an excellent and airy winter mulch. When applied at a depth of an inch or so they provide adequate blocking of sunlight and they degrade very slowly. For many years gardeners thought that pine needles made their soils too acidic. They don’t. In fact, down south garden centers and big box stores sell pine needles by the bag and bale for mulching.

Shredded or ground leaf mulches are also good winter mulches, but if the leaves, especially oak leaves, aren’t well shredded they will mat down and reduce air and water transfer to the soil. When maple leaves or maple mixed with oak leaves are used (shredded) an acceptable compromise winter mulch results. But again, only when applied when the soil has frozen.

Winter mulches of hay or straw should be avoided unless the seed heads have been cut and the bag or bale of hay or straw is known to be seedless. This avoids seeds from weeds in the mulch from becoming a problem in the spring. Hay and straw mulches are available both as bales and bagged. Hay is preferred to straw but hay must be fluffed at least once during the winter.

Assuming you get your winter mulches down in late December or even January (which isn’t uncommon) keep it fluffed during the winter. This is easily done with a rake or even a stick. It maintains the fluff of the mulch and thus the insulation value stays high as opposed to letting the mulch flatten out and mat.

And what’s the very best winter mulch? It’s that white stuff that’s a bit rare out here called snow. It has a great insulation value when it’s dry snow. Unfortunately, while it’s the best mulch it’s also preferred by the voles who thrive in the space between the soil and the snow and when the snow melts the telltale snow tunnels are revealed.

Winter is also a great time to get pruning done, but make sure the target of your cuts are trees and shrubs that are winter prunable. Spring-flowering plants like forsythias, magnolias, ornamental willows, rhododendron and azaleas should not be winter pruned. Fruit trees, on the other hand, will be the bulk of your winter pruning. These can be pruned any time from now until early spring but pruning is most easily done before the ground freezes. This has little to do with the pruning itself but when the ground isn’t frozen your ladder and footing are much more stable and the pruning becomes much safer.

Read up on how to prune your fruit trees. It’s certainly as much an art as it is a science. Don’t throw away the results of your pruning, especially from apple trees. Bundle these pruned “sticks” with twine and stash them somewhere where they’ll stay dry. These sticks can be cut to smaller lengths of 6 to 12 inches next summer, rebundled and then used on the summer BBQ for flavoring and as kindling in the fireplace and wood stove. The aroma when these sticks are burned is wonderful.

If snow and ice falling off your roof and crushing your foundation plantings has been a problem in previous winters, now’s the time for a plan and action. Burlap enclosures, lattice shelters and snow fencing are all methods used for this type of protection, but if you’ve got a large area, consider using a landscape contractor for this work. Boxwoods can be particularly tricky. One method to protect them is to tie them and pull them into compressed clusters or bundles. Not sure this is the method of choice these days with the problems we’re having with boxwood blight, but it’s still being done.

Driveway and walkway markers should be put in now. I put my markers a foot off the driveway and let my plow guy know that as it helps when the snow is deep and they need to know where the lawn is and where the driveway is. Wooden stakes will blend in nicely but they break easily during plowing. Orange fiberglass stakes are probably the best or yellow ones with reflective tape at the top. Use a metal rod and a hammer to make the initial hole then insert the marker. Always wear gloves. The fiberglass in these markers can splinter and leave nasty irritation slivers in your unprotected hands.

Stock up on snow and ice melters. Remember, though, that most will burn and damage plants. All are salts, but magnesium chloride is the least damaging to plants. Coarse sand, not playground sand, is great for traction. Think spring. Keep growing.