At Home With Jenny Landey - 27 East 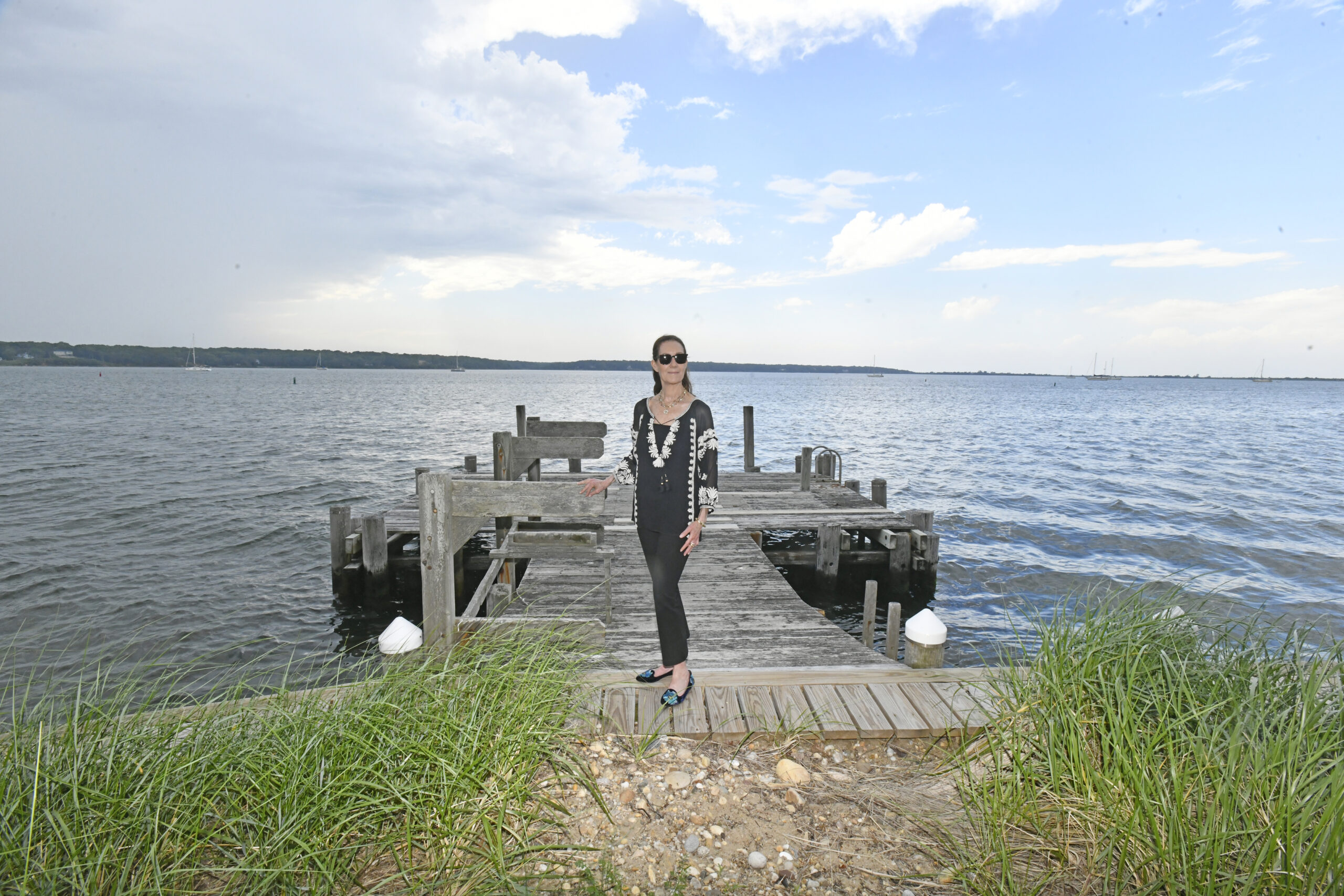 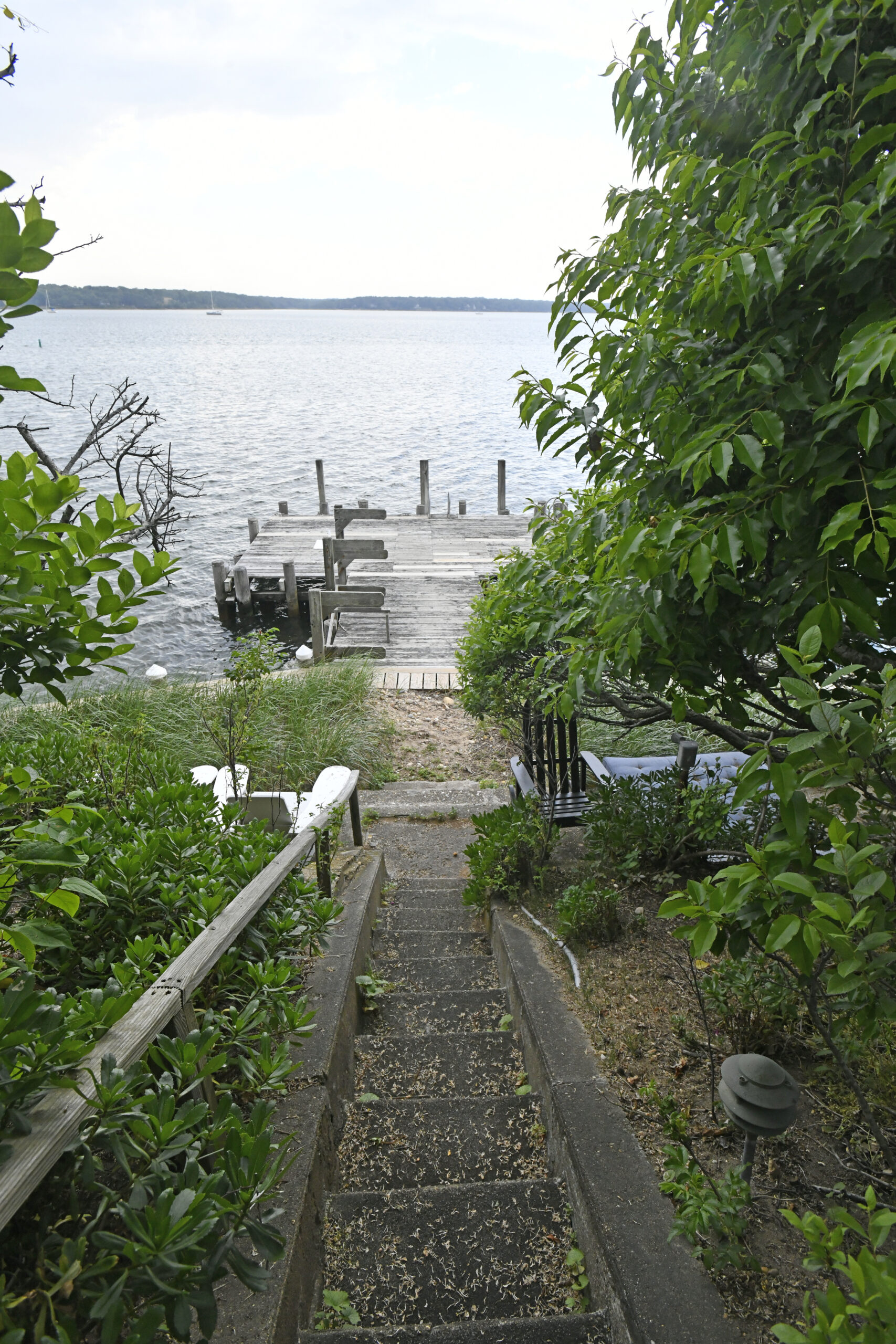 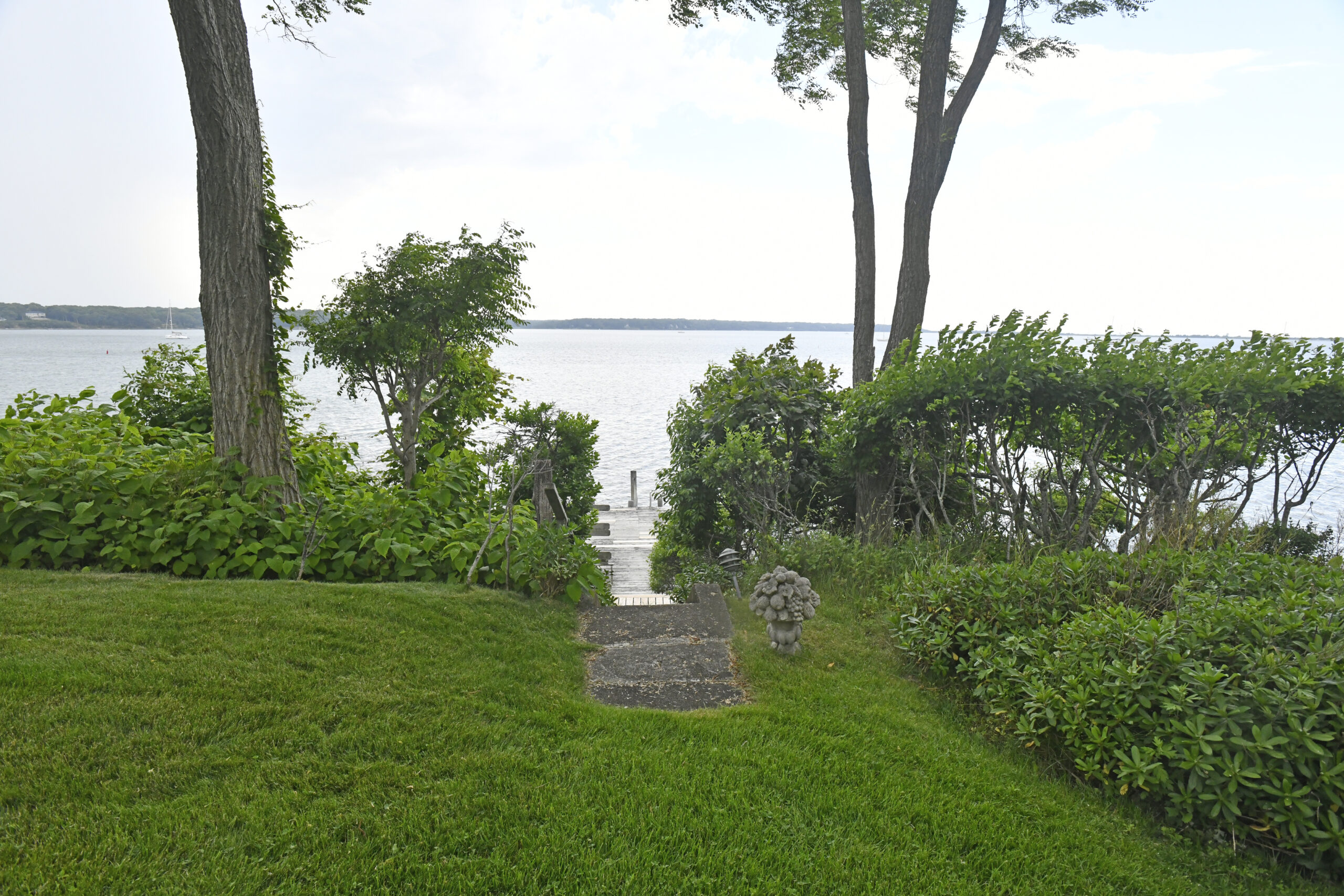 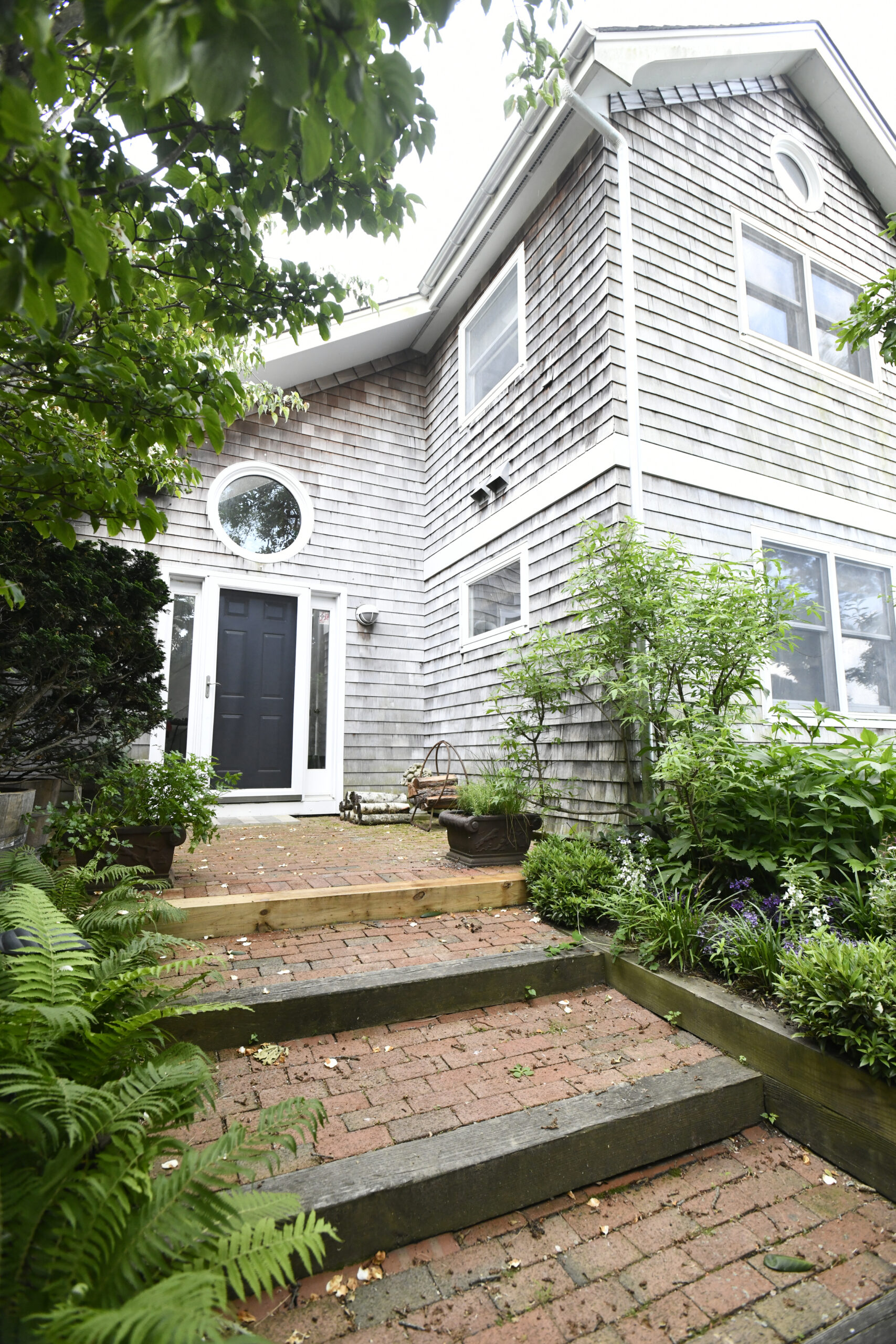 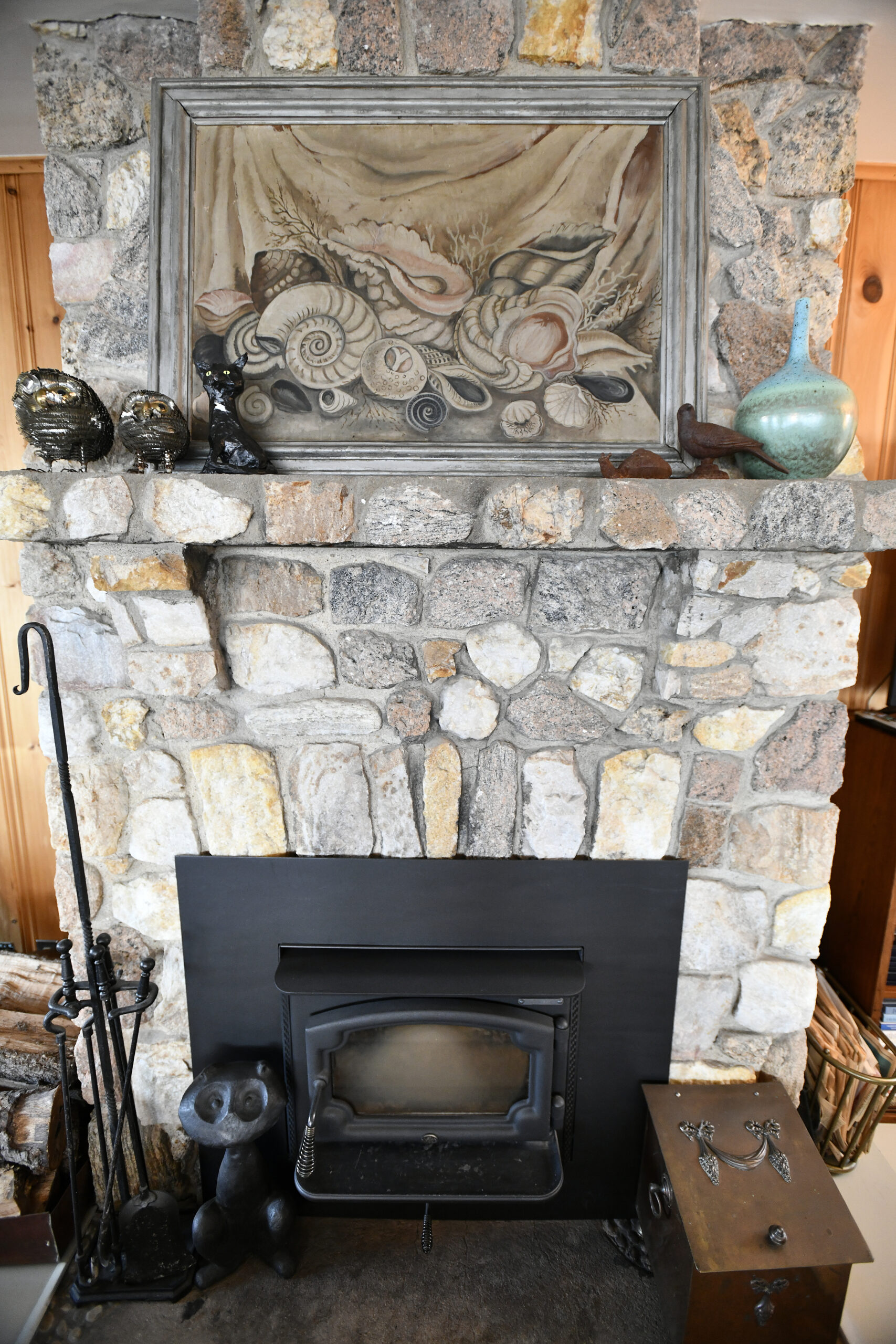 The stone fireplace in the living room. DANA SHAW 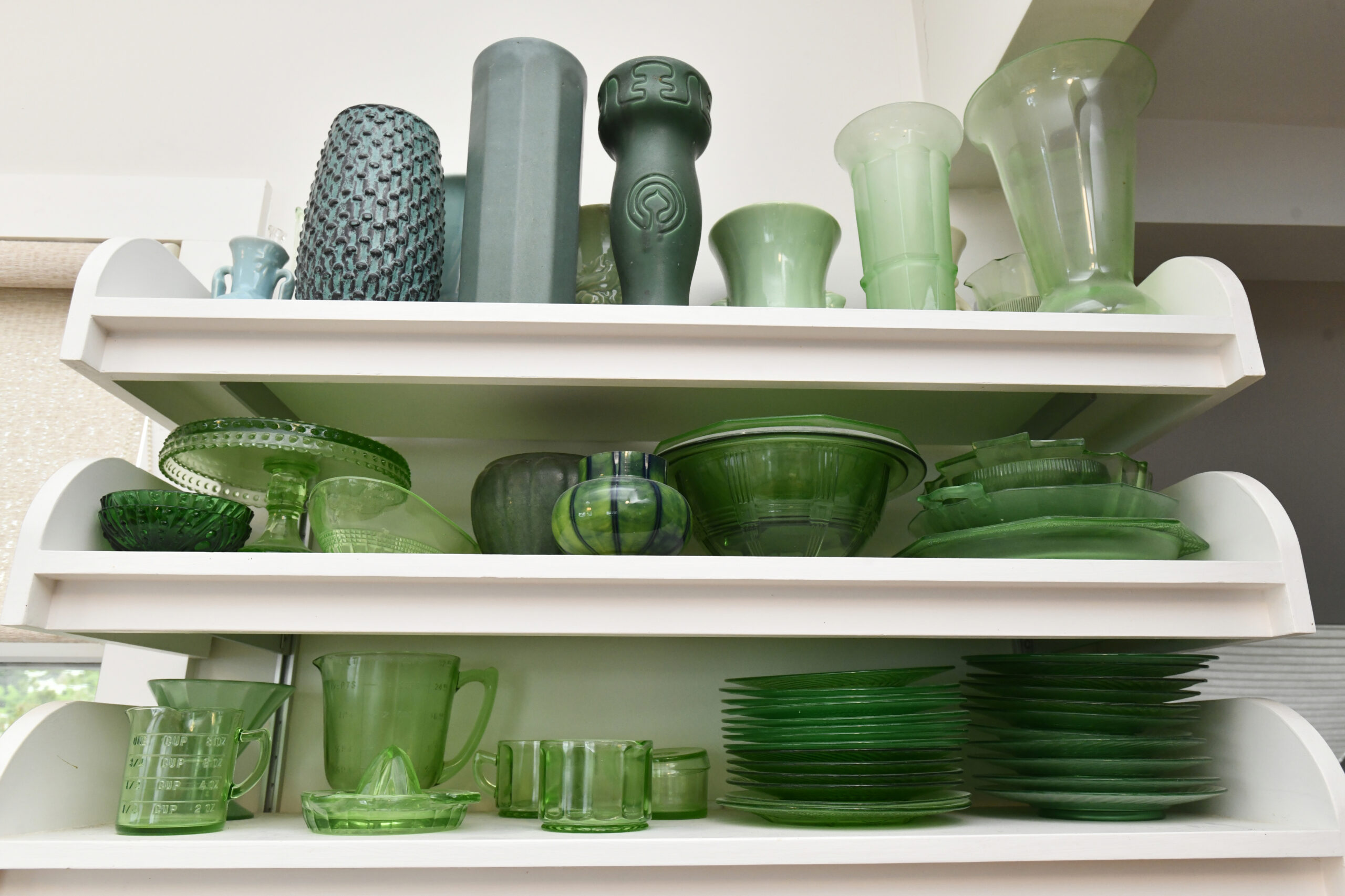 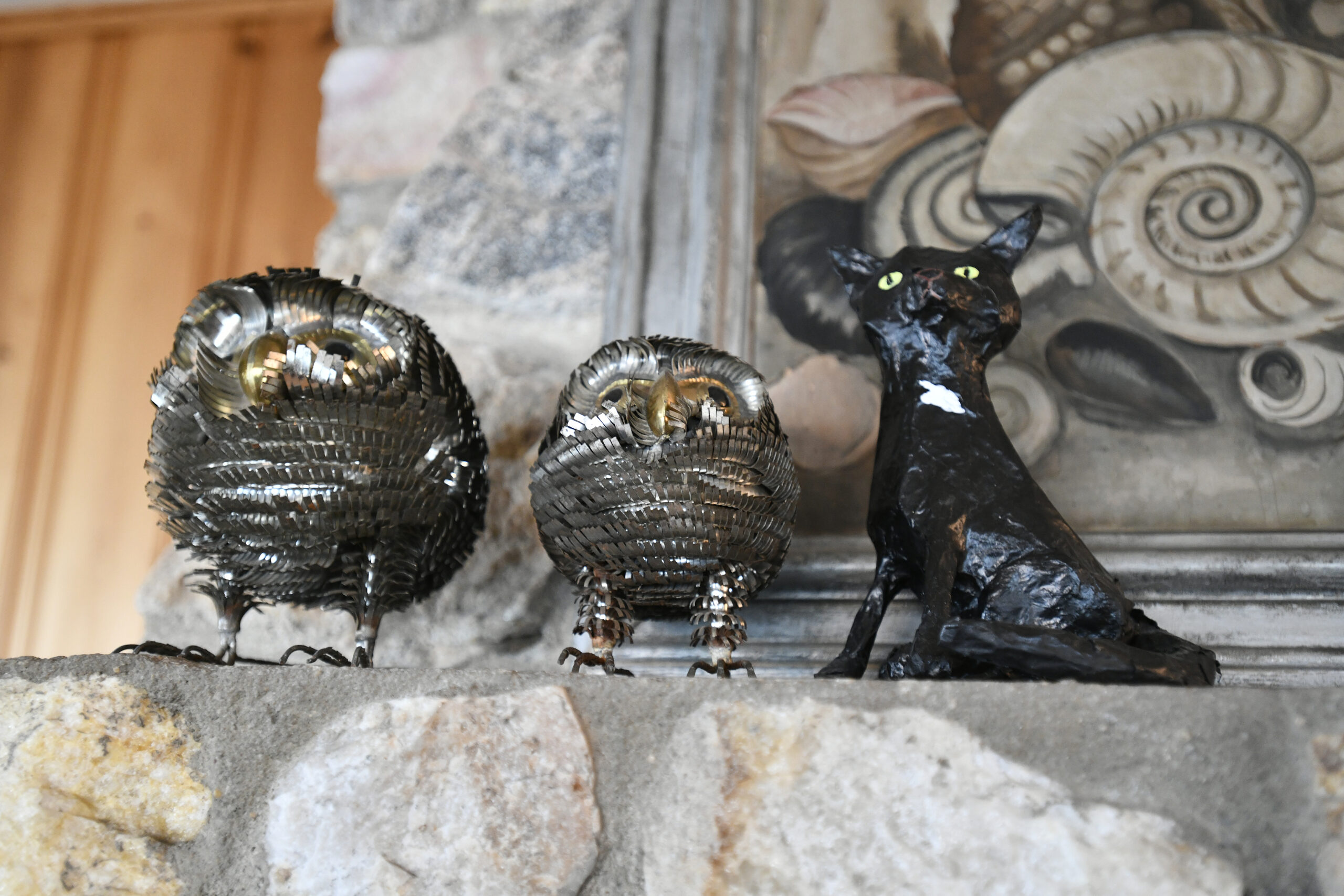 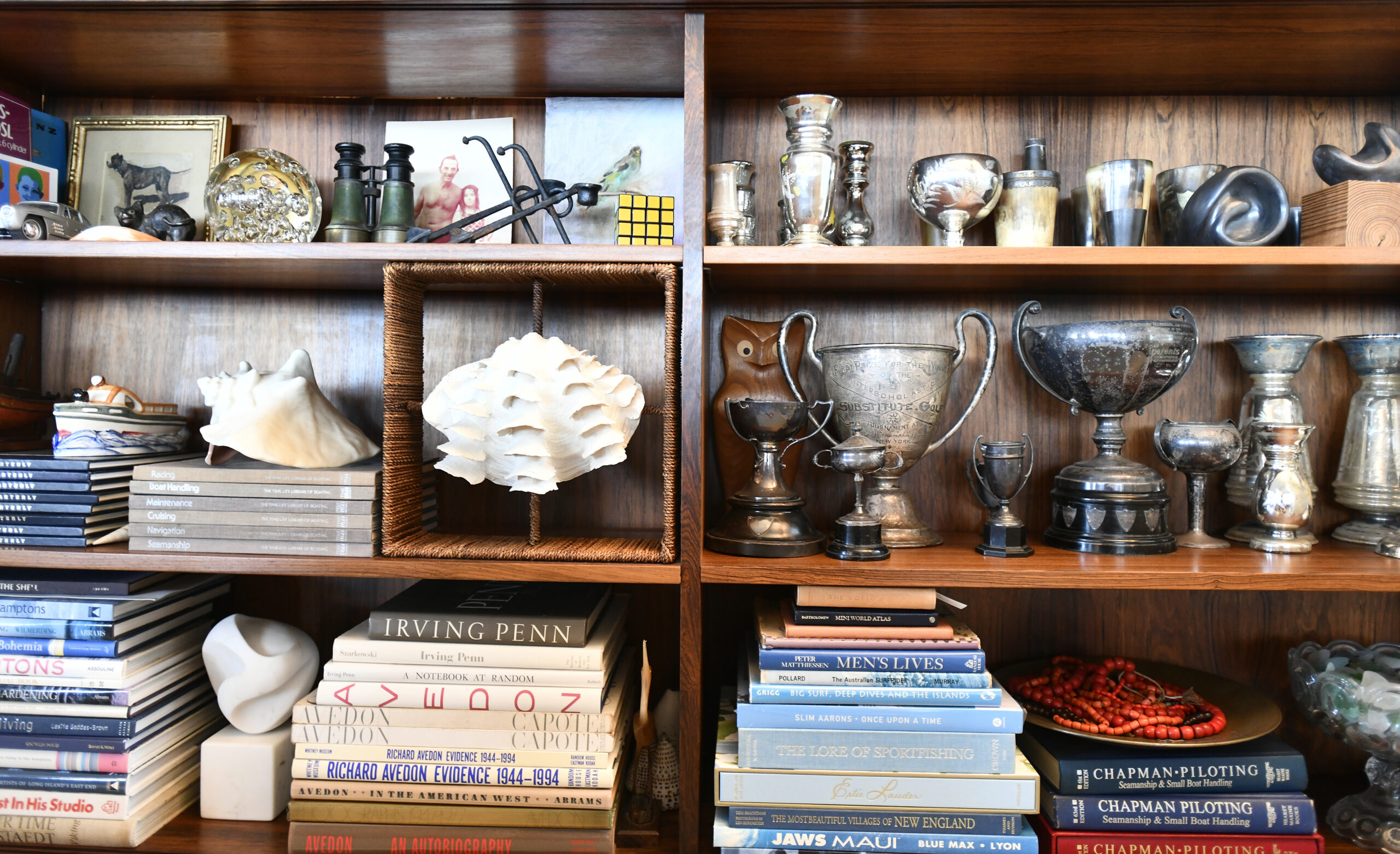 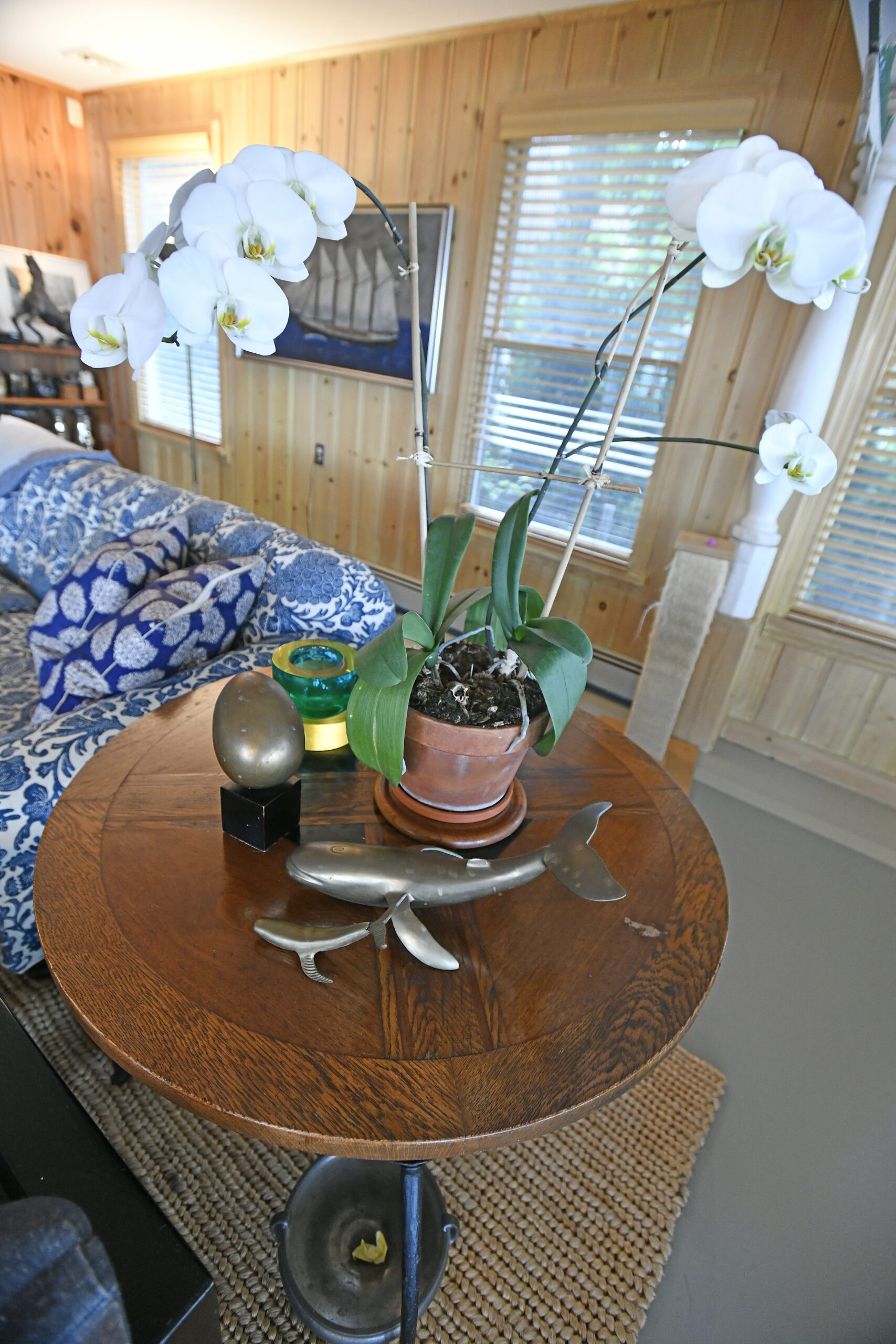 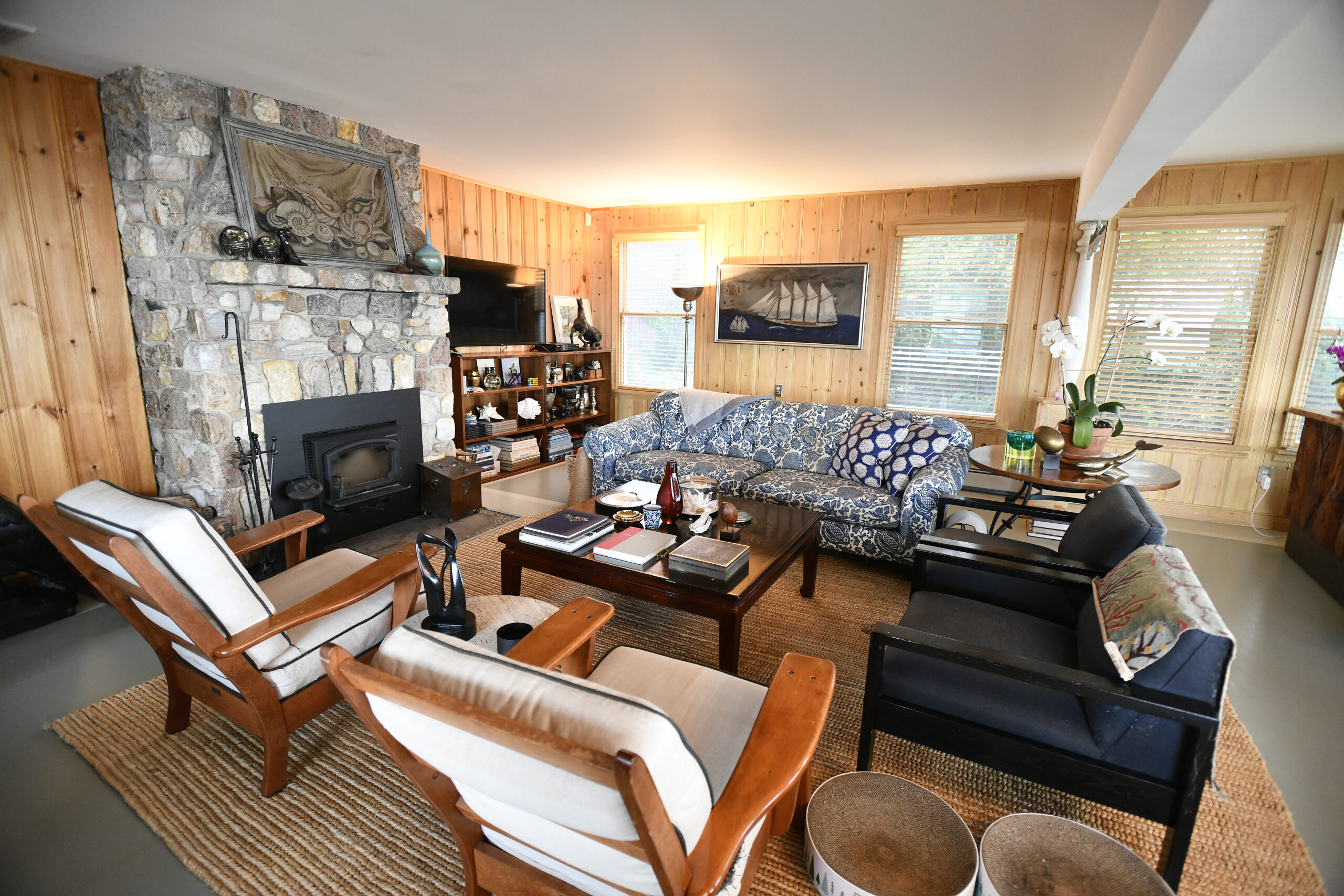 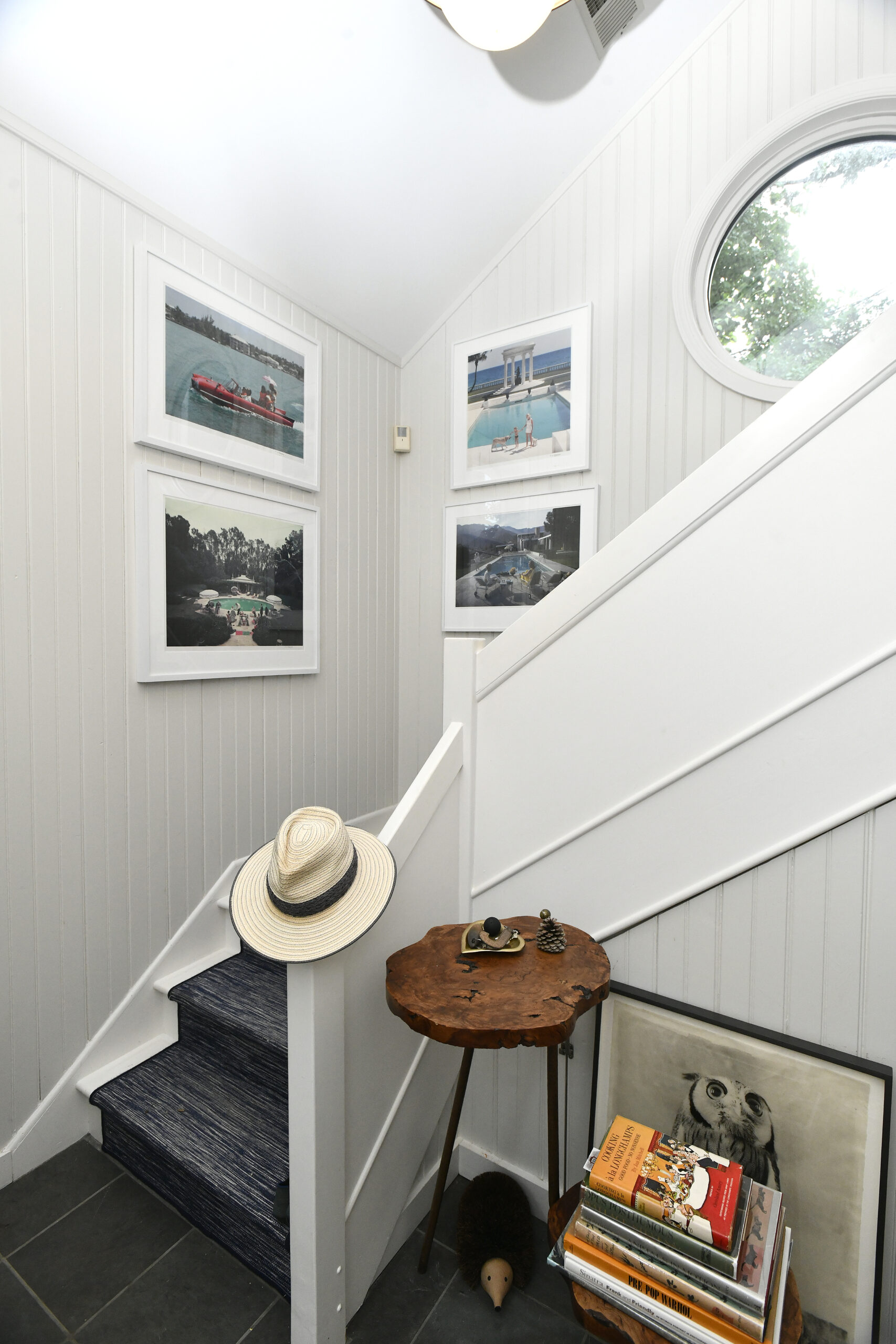 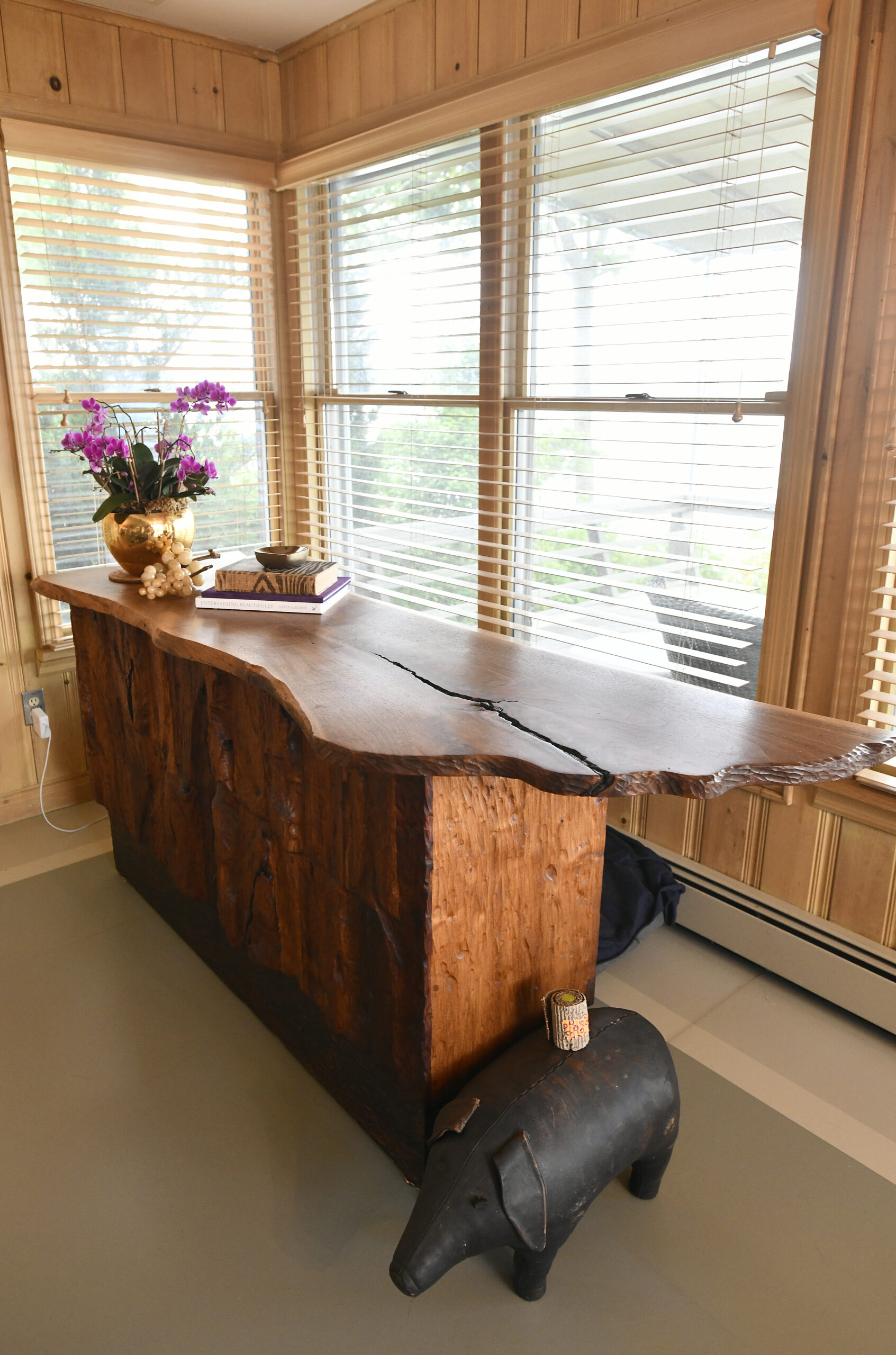 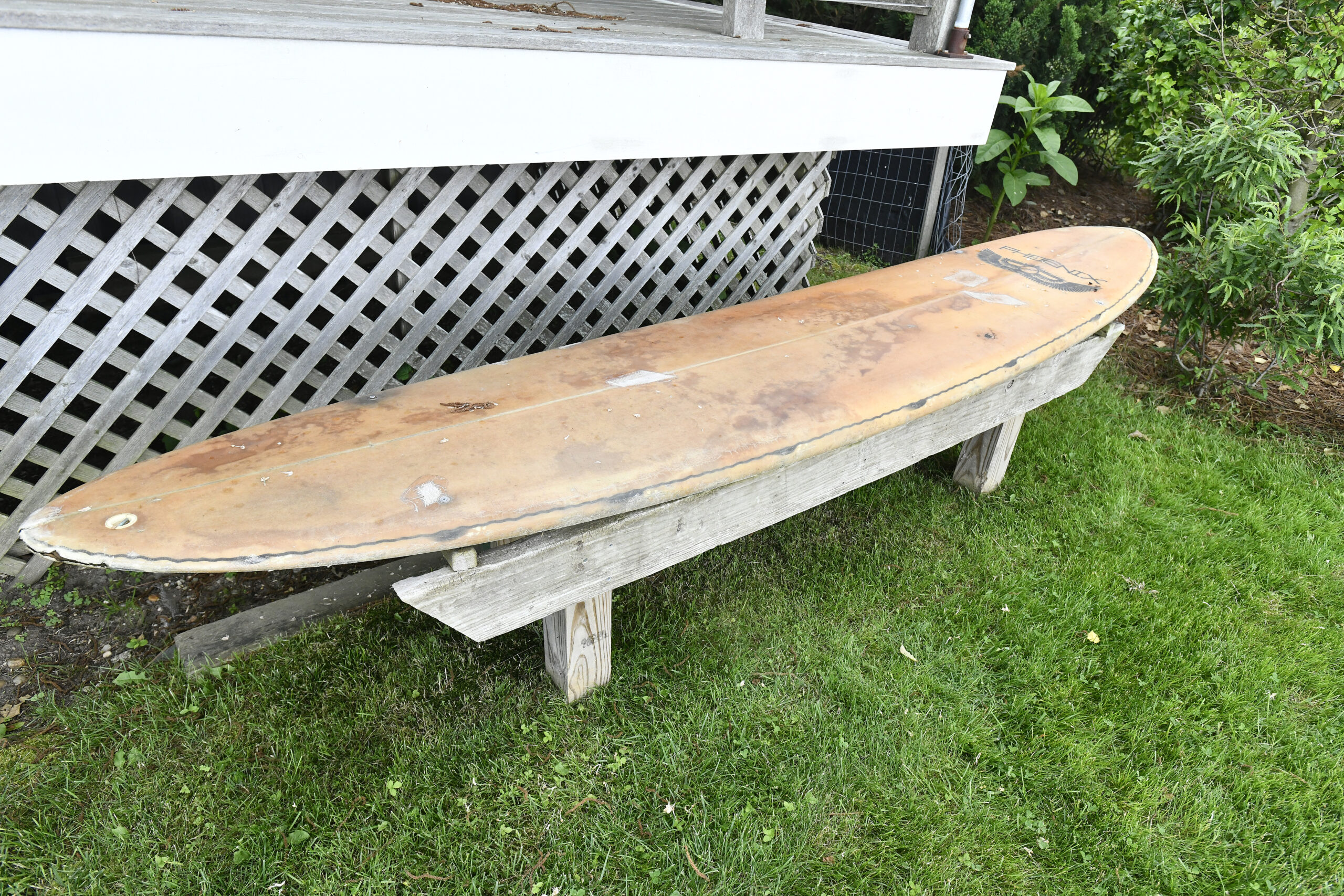 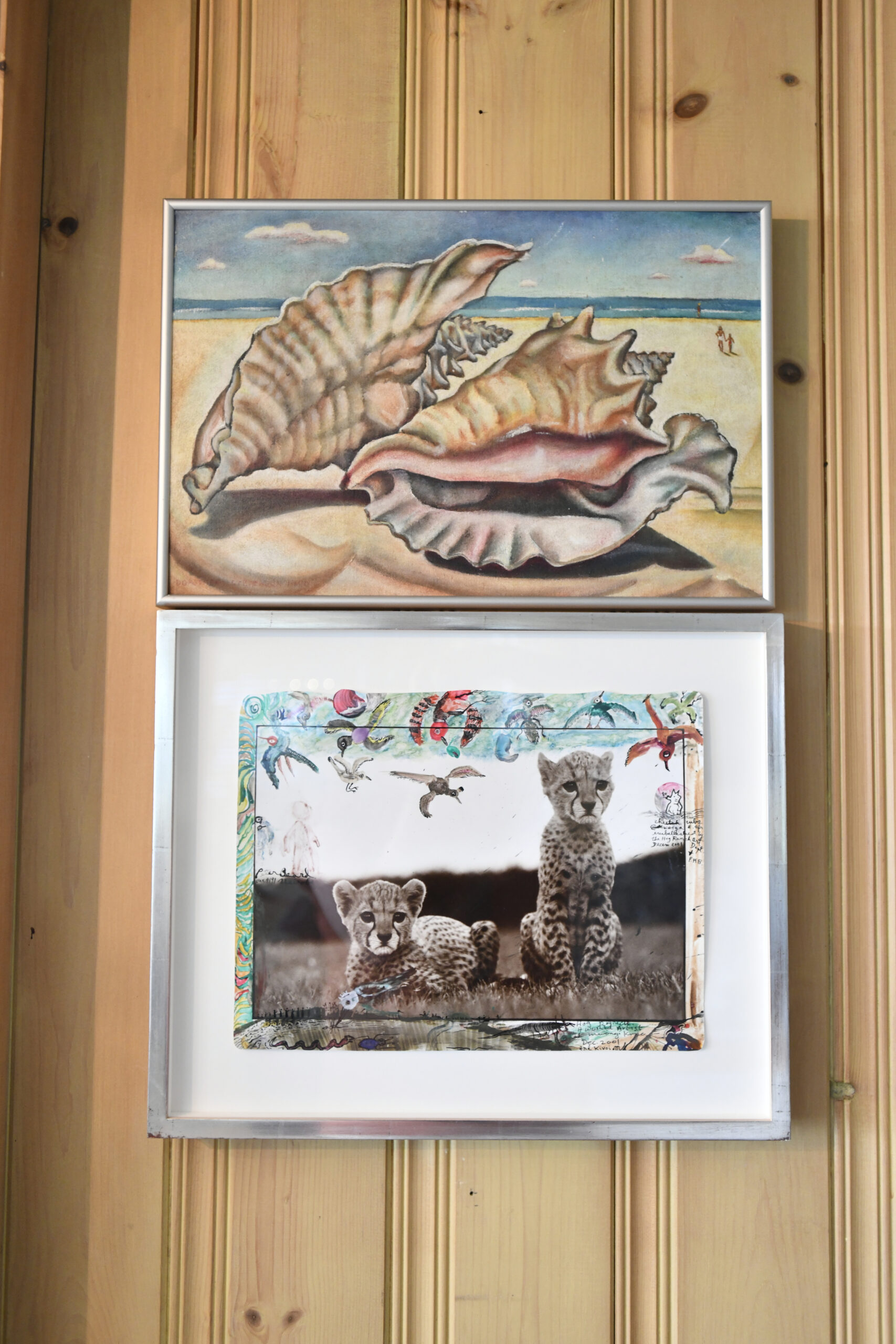 A vintage shell painting and a work by Peter Beard. DANA SHAW 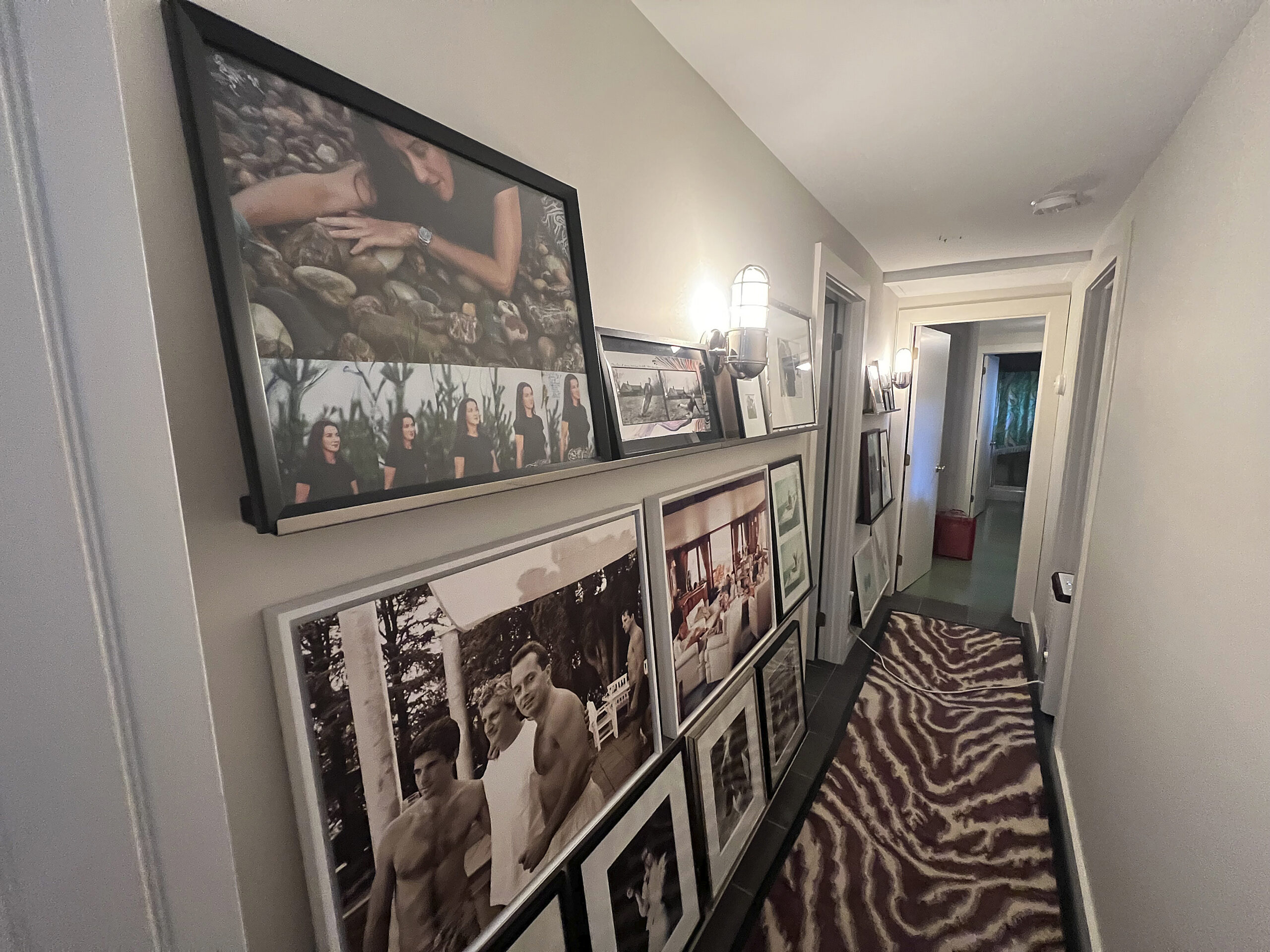 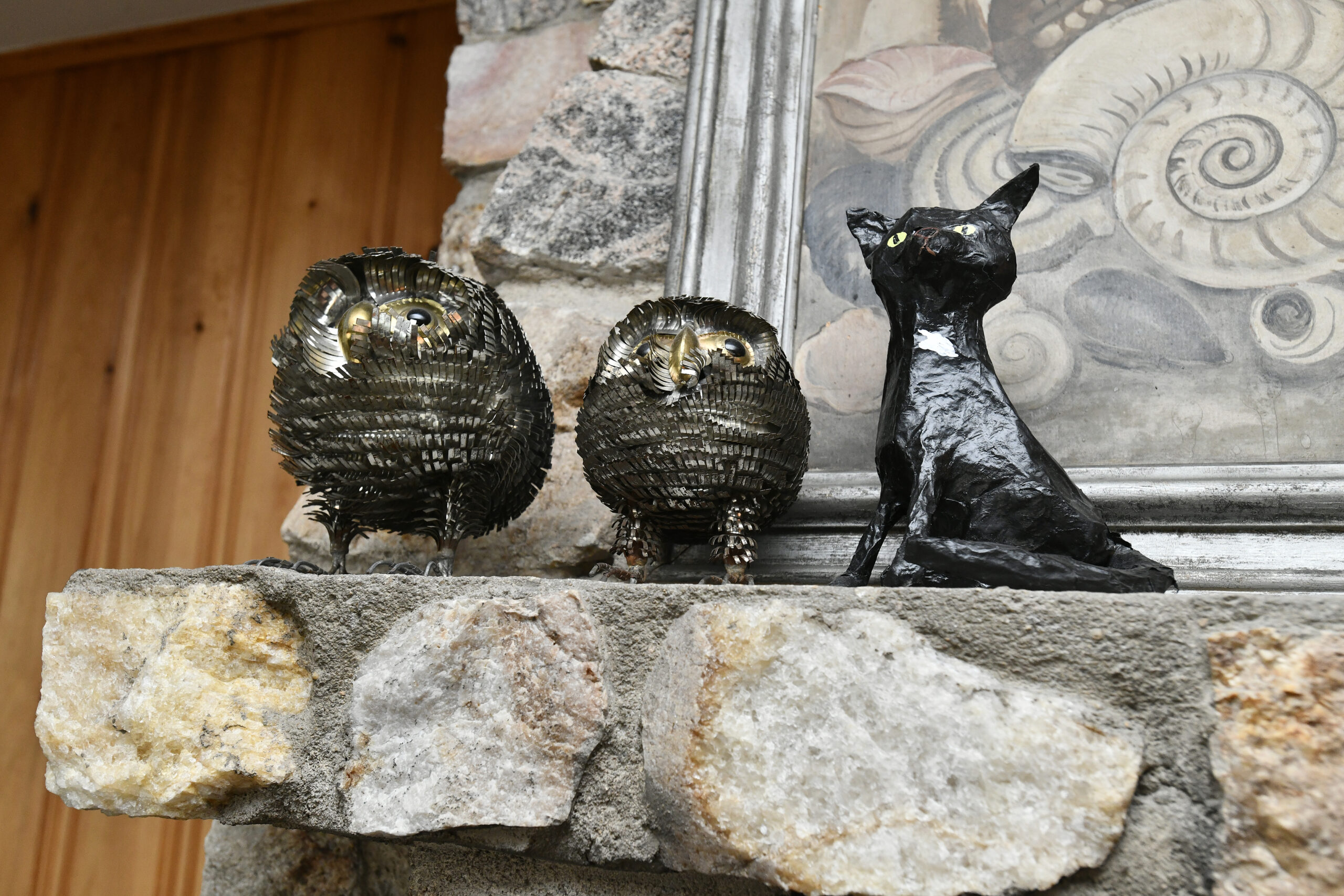 For 30 years, Landey has helped photographers find locations for magazine shoots, such as placing Jeff Bridges in the kitchen of an “unrestored” Ditch Plains cottage for GQ Magazine.

Photographer Peggy Sirota shot the actor, in a bulky knit sweater and silky striped pajama bottoms, sitting legs apart, in a curved wooden dining chair. A carton of half-and-half and various tchotchkes are strewn on the counter.

The atmosphere is so relaxed, it feels reminiscent of your grandparents’ home and seductive at the same time. As he gives the camera a pensive stare, he’s holding a yellow dial-up phone attached to the kitchen wall.

“The house has so much authentic ambiance and original character,” Landey said. “The phone is not a prop, it’s really there and works.”

In another favorite photograph shot by Pamela Hanson, model Christy Turlington lounges dreamily on a camp-style bed, next to a big old square fan on top of a white wicker nightstand.

“I also list this property as a real estate rental,” she said of the beach shack in Springs. “I love my role as a double agent.”

Landey was born and raised in Manhattan’s Upper West Side and Upper East Side. Her father, Martin Landey, was a legend in the advertising world who loved boats, fishing, food, cooking and antiques. “A real Renaissance man,” she said.

Her mother, Stephanie Beling, is a retired doctor who lives in the Berkshires and most recently worked at Canyon Ranch. “She was a big proponent of functional medicine and ‘you are what you eat’ long before it became a thing,” Landey said.

“I grew up in New York City, which was so much fun,” she said. “Studio 54 was my after-school nightspot. I took advantage of what the city had to offer. We all did at the time.”

Summers were spent at her father’s house in Westhampton. As an adult she migrated to East Hampton, where many of her friends had homes.

That home appreciated so much that she was able to buy a waterfront property on Gardiner’s Bay, on Kings Point Road. She kept her boat at East Hampton Marina, however, and developed a deep affinity to the harbor and its breathtaking sunsets.

Sitting on her porch, watching sailboats glide by on a sunny day, you don’t have to be a boater to understand her love. The property is lushly landscaped with hidden nooks where Thunderhead black pines accentuate fanning ferns. Steep concrete steps lead to the dock and a king-size lounge under an overgrown tree.

Her two-story, two-bedroom hillside home was most likely built in the late 1800s. “The original owner was Jud Banister, the village mayor for 18 years from 1936 to 1954,” she said.

Like many native New Yorkers, it was hard for her to give up her apartment. “I held onto it for years. It took a lot of soul searching to realize I just don’t need it,” she said. “I’m lucky to have friends with far better apartments.”

Landey has a lot of longtime friends and she seamlessly uses her network to connect people to their creative visions. “So many of my friends are still here. It’s like I’ve never left my hometown,” she said.

Few people are skilled enough to make a living from those connections. “I really don’t think I had a particular calling,” she said. Location scouting wasn’t really a profession at the time she began her career. “The photographer or ad agency took care of it.”

It took stints working on the client side of her father’s advertising agency, prime time television news, Interview Magazine and the Andy Warhol Foundation to realize she may not have had a calling but she sure could get stuff done.

“I felt I had a skill that didn’t need major backing,” she said. “I had a fax machine and pager, and I haven’t looked back.”

Connecting a client’s vision to a property translated well into real estate. “I joined Sotheby’s five years ago, very late in my career. It never crossed my mind,” she said. “Finally, it dawned on me that I can do this too.”

That’s an understatement. A good percentage of real estate signs in Springs have her name on them and she recently listed the jewel of Accabonac Harbor, Edwina von Gal’s 1974 modernist home.

“Springs has a lot of character,” she said, sticking to her aesthetic. “It has roots in the history of the area.”

While homebuyers might be looking for the perfect home, photographers are not. “A kitchen from the 1970s might be a homeowner’s eyesore and a photographer’s dream,” she said. “I’m always looking for locations with soul.”

Her own home was “badly renovated in the 1980s” but that didn’t stop her from keeping the GE oven from that era, as well as the green glassware that came with the house. “I’ve maintained more than renovated,” she said.

Photographs by Slim Aarons, Kelly Klien and Peter Beard adorn her hallway walls. “Here’s a portrait of me by Peter Beard,” she said.

It was taken in 2000 when she was 30. She bid and won a silent auction at a benefit for the Montauk Lighthouse. “I thought I was bidding on a photograph, and tried to negotiate out of it,” she said. “I’m a behind-the-camera type of girl.”

But Beard, a longtime friend, wore her down. “It was a photo session at his house,” she said. “Zara, his daughter, did my makeup. She was like 10.”

“I’m also a vintage book buyer for Aerin Lauder’s Newtown Lane shop, Aerin,” she said, showing off a stack of books in her study, including her favorite “I Married Adventure,” by Osa Johnson, which sports a zebra fabric cover. “It’s fashion.”

At one point, Landey even had a boat rental company called East Hampton Yacht Co. and still has her father’s restored 1976 Donzi. “It turns a lot of heads,” she said. “Originally it was named ‘Indulgence,’ which was very him but not very me.”

When the boat was repainted, she did not rename it, but “Renaissance Woman” might be a good fit.

It was a cold, wet Sunday in March when my phone rang. It was neighbor ... by Andrew Messinger