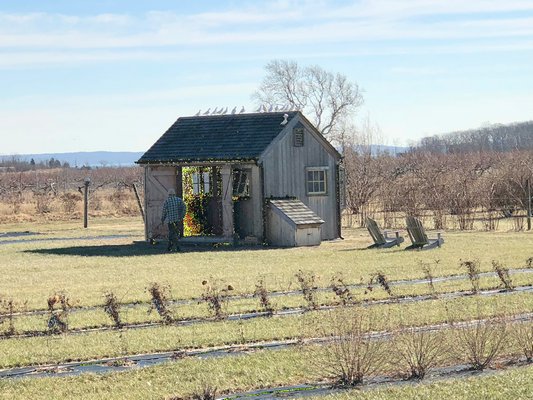 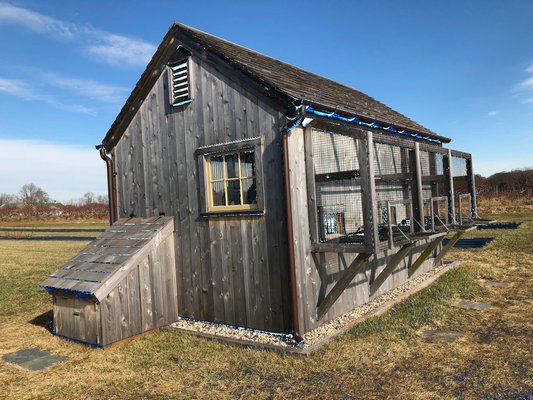 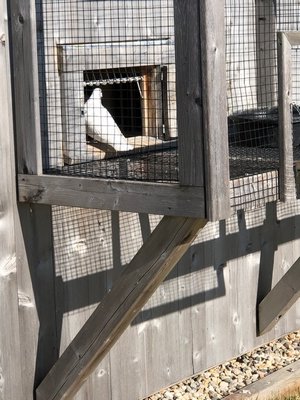 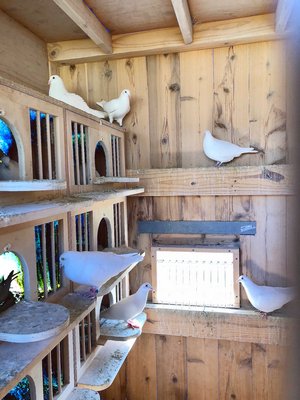 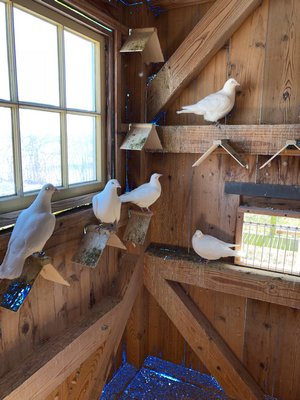 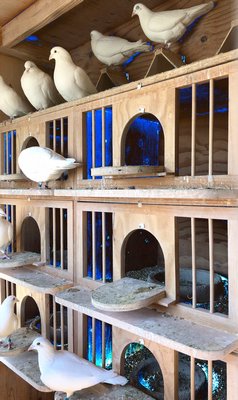 This mixed-income, multigenerational, urban cohousing community in Jamaica Plains, Massachusetts is has 30 units and was completed in 2005. COURTESY DOROTHY REILLY 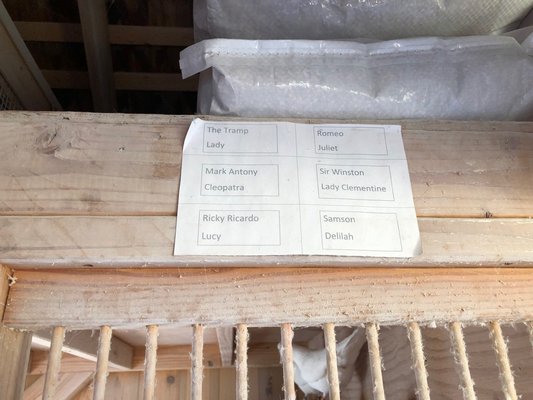 Names of pairss of birds in pens. ANNE SURCHIN 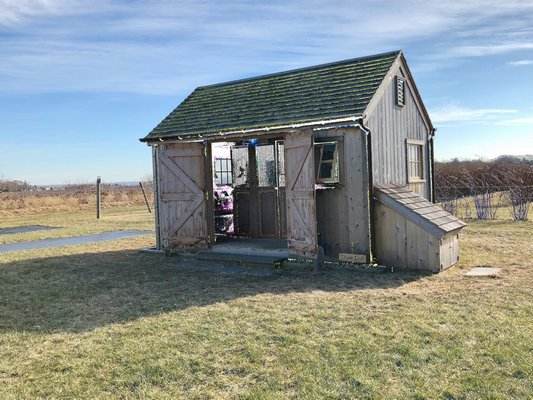 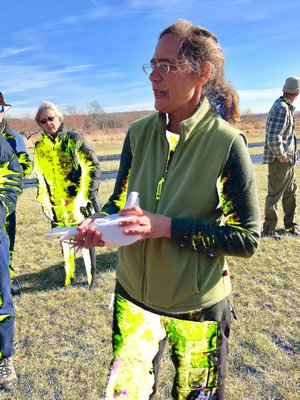 Prudence Heston demonstrates how to holda dove. If a dove is held too tightly around the chest its lungs could be punctured and die. ANNE SURCHIN

A demonstration and talk by Prudence Heston, held on Saturday at Salt Air Farm in Cutchogue, on doves bred and raised for event releases was nothing short of uplifting (no pun). The event, sponsored by the North Fork Audubon Society, attracted a sizable crowd of curious and enthusiastic spectators.

The visitors walked to an open field to view a group of white doves aglow in flight against a backdrop of a cerulean blue sky. The birds, released twice a day, morning and afternoon, for exercise and fresh air, have been trained to return to their cedar-clad dove loft—a simple, rectangular structure designed specifically for the comfort, security and well being of its occupants.

Salt Air Farm is a family-run, 125-acre specialty farm focusing on flowers, fruits and garden parties. The doves are raised and trained for release events all over Long Island. They will, for example, be used at weddings where they fly up the aisle in front of the bride and then back to the farm. The birds are often requested for funerals as well as themed events such as Renaissance and Medieval festivals. The farm’s website notes that, “Since the beginning of time white doves have signified love, purity, holiness, fidelity, spirit and new beginnings.”

The Salt Air Farm doves are a cross between a rock dove and a racing pigeon and this combination provides a bird with the great looks of a dove and a well-bred racing pigeon’s homing ability, which can reach 600 miles. Originally bred in Belgium, they were brought to this country by Roy Rogers as a gift to Walt Disney. Prudence and her husband, Dan, bought their birds, all of which come with pedigrees, from the Disney Company. While bred to be wild, they also function as a domesticated bird and are great fun to work with and observe. The doves are exceptionally intelligent and considered to be the eighth smartest animal in the world. The birds can actually pick their caregivers out of photographs as well as learn the alphabet. Ms. Heston’s doves communicate with her when they want to communicate. If there’s a problem in the loft they let her know right away. After six years of tending to these birds she confessed she’s learned to speak a bit of dove as well.

High-end racing pigeons hold a prominent place in the lives of royal families. Kings and queens from all over the world spend more money on racing with pigeons than is actually spent on horse racing. Queen Elizabeth is a fourth-generation member of the Royal Family who has fancied pigeon racing. And a great racing pigeon can cost upward of several hundred thousand dollars.

Prudence and Dan Heston have a training regime for their doves to develop their homing abilities. Newborns stay in the loft for their first three months. Once they go up in the air, which is known as “tripping out,” they are ready to be trained. The birds are put in carriers and taken in different directions around the property and released to fly back to the loft. Eventually, the distances are extended on an incremental basis of 1, 3, 5 and 10 miles followed by 20, 30 and 50 miles. The birds don’t like flying over water but as part of their training the Hestons have released them off the Shelter Island ferry for their flight back to Cutchogue. While the birds can fly in the heat and the cold, it is too dangerous for them to fly at night or in the rain.

This type of dove has a superb sense of smell, extraordinary eyesight, and huge ears that can hear waves crashing on the beach miles away from the farm. The top of their beaks feature a bump, actually a homing magnet, which is engaged only for navigation when nothing else is familiar to their senses. When the Hestons travel on the Long Island Expressway to an event, the birds will fly over the same highway to return home. At a speed of 50 mph, the birds often arrive at their loft before the Hestons.

While the dove loft’s design appears simple, the little building has to encompass some complicated programmatic elements. The Hestons, who did extensive research on this particular building typology, designed the structure themselves. By siting the building in the field far away from trees, the risk to the doves of being attacked by a Cooper’s hawk is greatly reduced. The building is also constructed to keep the birds safe from the weather as well as predators such as raccoons.

Three pen sections, containing 60 birds and perches galore, also provide nesting areas where the squabs are raised. A landing platform allows the birds to enter the aviary and go into the loft opening by pushing through bobs, an arrangement of vertical wires. Once inside, however, the bobs restrict egress to the outside from the pens. A dove loft needs plenty of ventilation to keep the birds healthy, so in addition to the controlled openings, chicken wire surrounds air spaces in the eaves. Providing an adequate amount of light is quite important, too, otherwise the birds could become depressed. Since the  dove loft is remotely located, a generator providing electricity for service functions is housed in a small lean-to wing on the west wall.

Lastly, the dove loft could not look like any old chicken coop, especially since events are often held on the property. Salt Air Farm is a historic landmarked property so the little building had to fit in nicely with the rest of the property. Custom double shed doors, like those of other utility structures, provide easy access to the pen enclosure hall. The eaves, which have a curved edge, sit in front of half-round copper gutters and leaders while the recycled wood window sashes have been painted to match the house and out buildings.

Clearly, if one were to be reincarnated as a dove, this would be the place to live.

If Mocomanto were to be recreated in Disneyland, which version of the historic house would ... 5 Feb 2018 by My27east
Sign in to comment