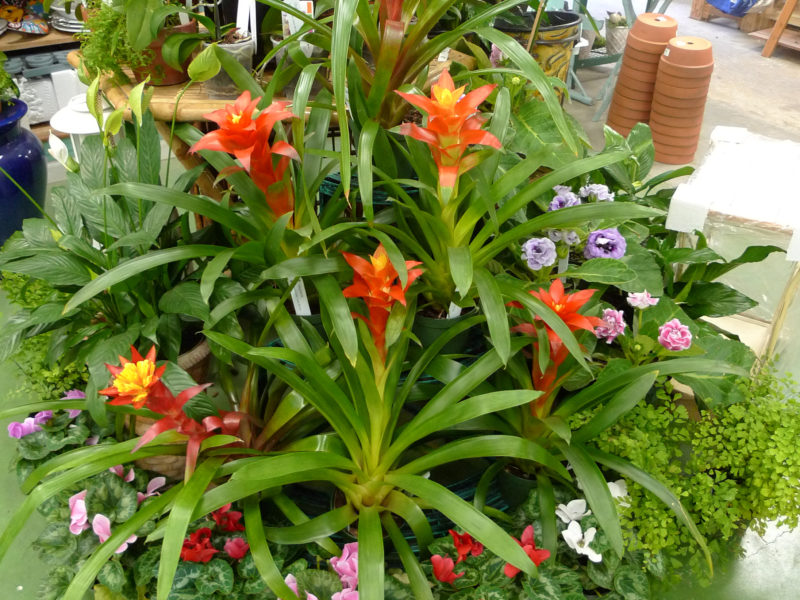 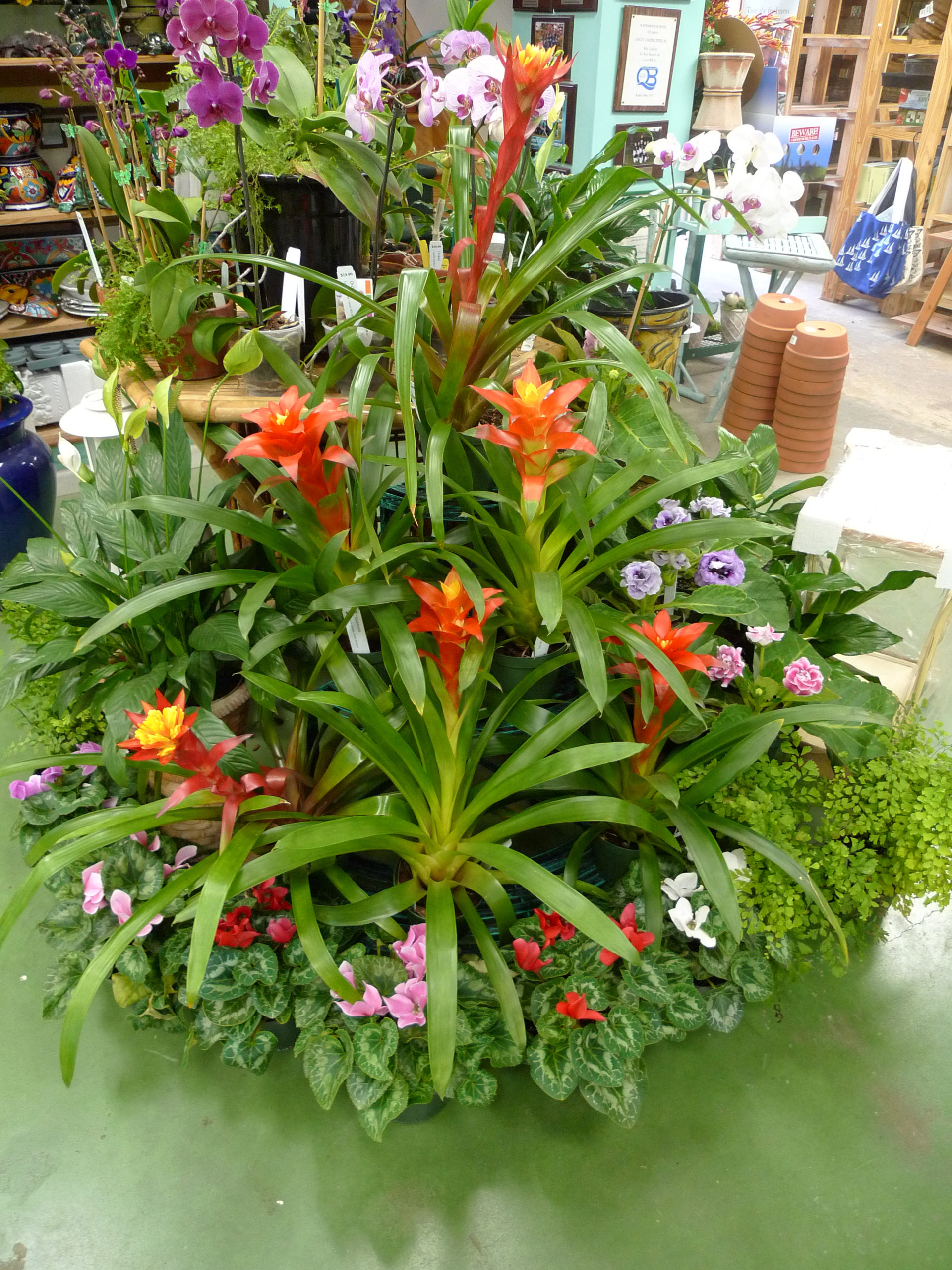 A display of several Bromeliads (center) at a Southampton garden center. These are in full bloom and the blooms will last for weeks. 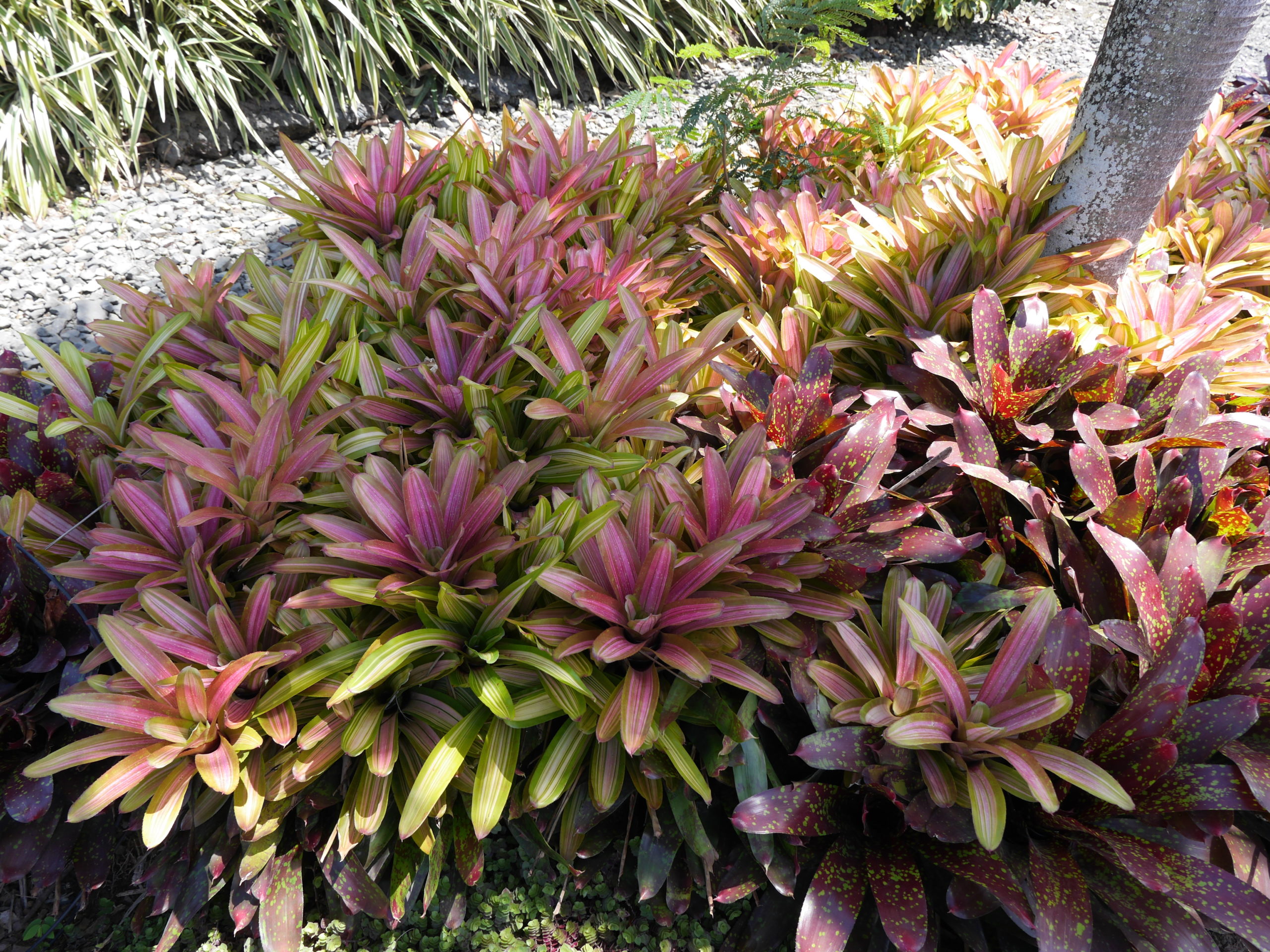 Often used in tropical landscapes and indoor plantscapes, these Bromeliads are showing their colorful foliage bracts but they are not in flower. Even at this stage, they still make attractive houseplants that are very easy to grow. ANDREW MESSINGER

Looking for plants to liven up the house for the holidays? Want something other than poinsettias and Christmas cactus? There’s a group of plants that make excellent houseplants that not only flower at various times of the year (including the winter months), they need little care or attention and can provide unique flowers that will bloom for weeks and even months.

The plants in this family are relatives of both Spanish moss and pineapples and they all share two very important characteristics. First, they are epiphytes, or plants that use their roots to cling to trees or other objects for anchorage while absorbing nutrients from the air. But more important, they are bromeliads, members of a large family of plants that are particular to the Americas. In addition to being beautiful, some might also be viewed as, well, weird.

The clue to understanding the culture of bromeliads is that they do grow on trees, usually many feet above the ground, where they receive filtered sunlight and moisture (but not dripping wetness) and constantly moving air. If you can come close to simulating these situations, possibly in a sky lit bathroom or a kitchen, bright living room (or, of course, a greenhouse) you can’t fail. They’re also quite portable and easy to move from room to room.

Bromeliads are monocots, which puts them in the same plant category as lilies, corn and grasses. When the seed germinates, only one seed leaf (mono) develops at a time. As these leaves develop they are usually arranged in a rosette with stiff to coarse blades overlapping to form a cup, or reservoir, which holds water in the center. The leaves of most species have minute scales often giving them a grayish cast. On these plants these hairy scales are actually tiny sponges that absorb water, but on other types, the foliage can be quite striking and beautiful.

Roots are few, very tough, adhesive and wire like. These roots grow quickly and can fill a good sized pot in less than a year. They are very susceptible to rotting, and it’s generally accepted that plastic pots will cause too much moisture retention. Clay pots are preferred. I confess that we’ve grown several varieties in plastic and compensated by using a very loose bark mix instead of a standard potting soil. Drainage is almost instantaneous in this case.

The flowers usually arise from the center of the rosette and occur as clusters on a stalk. Their showy, often incredibly brilliant, vibrant spikes are called an inflorescence. The individual blossoms are usually small and always have three petals. While the flowers are often brightly colored, it’s the bracts (specialized leaves) which are the center of attraction. The bracts, as a rule, are more colorful than the blossoms.

These plants are often described as “long lasting,” but this is generally a reference to the bracts, which can take three to four weeks to reach peak color and then remain at that peak for another month. As I noted earlier, there’s no guesswork in watering these plants. No Monday, Wednesday, Sunday, no every third Tuesday and not when the soil feels dry a half inch below the top. Remember that the roots need very little, if any, watering, but never forget to fill the “cup” in the center of the plant. Some water will drip out of the cup and down toward the roots, taking care of their meager needs. When the water’s gone from the cup, guess what. That’s right, bunky, fill ’er up.

Overpampering these plants will undoubtedly kill them. Feeding them is optional, and when done it should be with a very weak solution of low analysis plant food like a fish emulsion or seaweed extract. In many cases, the minerals that naturally occur in our drinking water will suffice. If you do fertilize, do it when the plant is blushing (foliage changing color toward the reds) and while flowering. Mix the fertilizer with water, and in the old cup it goes.

Insects are rarely a problem. The occasional mealy bug can be twirled off with a Q-Tip soaked in alcohol, and if scale is ever present it can be simply scraped off with a finger nail or the plant treated with a light horticultural oil.

The only other problem is some occasional leaf burn from too much time in Palm Beach or a southern window. Remember, they grow in filtered sunlight in their natural habitat, which means that at most they’ll tolerate a southerly exposure in the winter, but at no other time.

The first of the three types to look for are Billbergias, which tend to be tubular, tall, fast growing and short lived, but with the most spectacular blooms.

Neoreglia carolinia, which is my favorite and may live for three to four years, makes a great centerpiece and has the most magnificent foliage colors turning from a two-toned green to several gradients of green, lime, pink and red over a period of several seeks and then for about a month all four of the colors are present on each leaf.

Finally there are the Tillandsias, which are true air plants. These are occasionally sold in garden centers on a piece of tree branch or attached to a piece of tree bark. Small in size, many of them can be grown in a restricted area. Spanish moss is often included in this group, but so are some varieties having fuzzy pointed leaves emanating from a compact roost, which turns rosy pink when flowering.

These plants used to be hard to come by, but there are a number of greenhouse and garden centers in the Hamptons that carry several varieties. Stay away from those offered in supermarkets or the Big Orange Box unless you’re desperate or on the cheap.

As and added bonus, the plants will often form “pups,” which are small offshoot plants or “babies” that are formed from the base of the plant and emerge off to the side. As these pups get larger, say 3 inches or so, they can be separated from the parent plant with a sharp knife and simply potted in another pot. Remember, no soil; use a loose bark mix and water only sparingly.

For more information on this intriguing group of plants, check out the website of the Bromeliad Society International at bsi.org and check out some local garden shops for these remarkably easy and intriguing plants. There are also a number of online nurseries selling them. Have fun and keep growing.