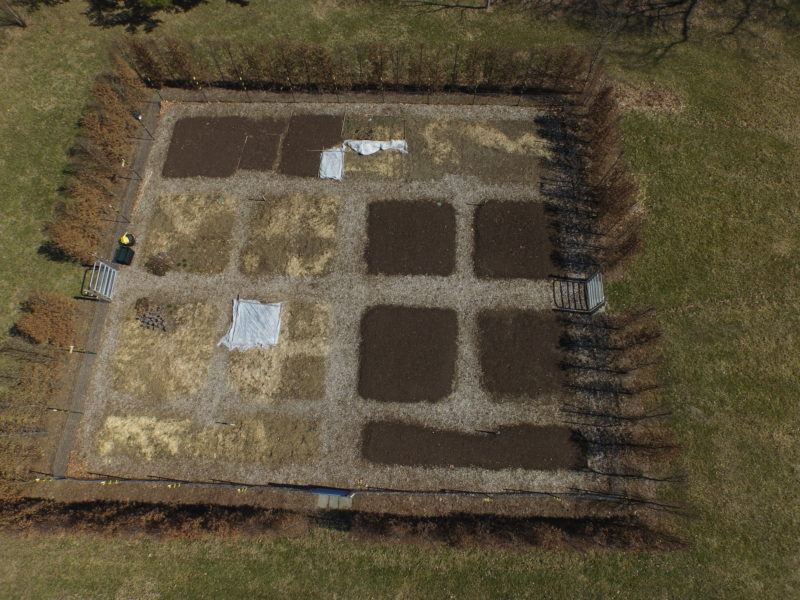 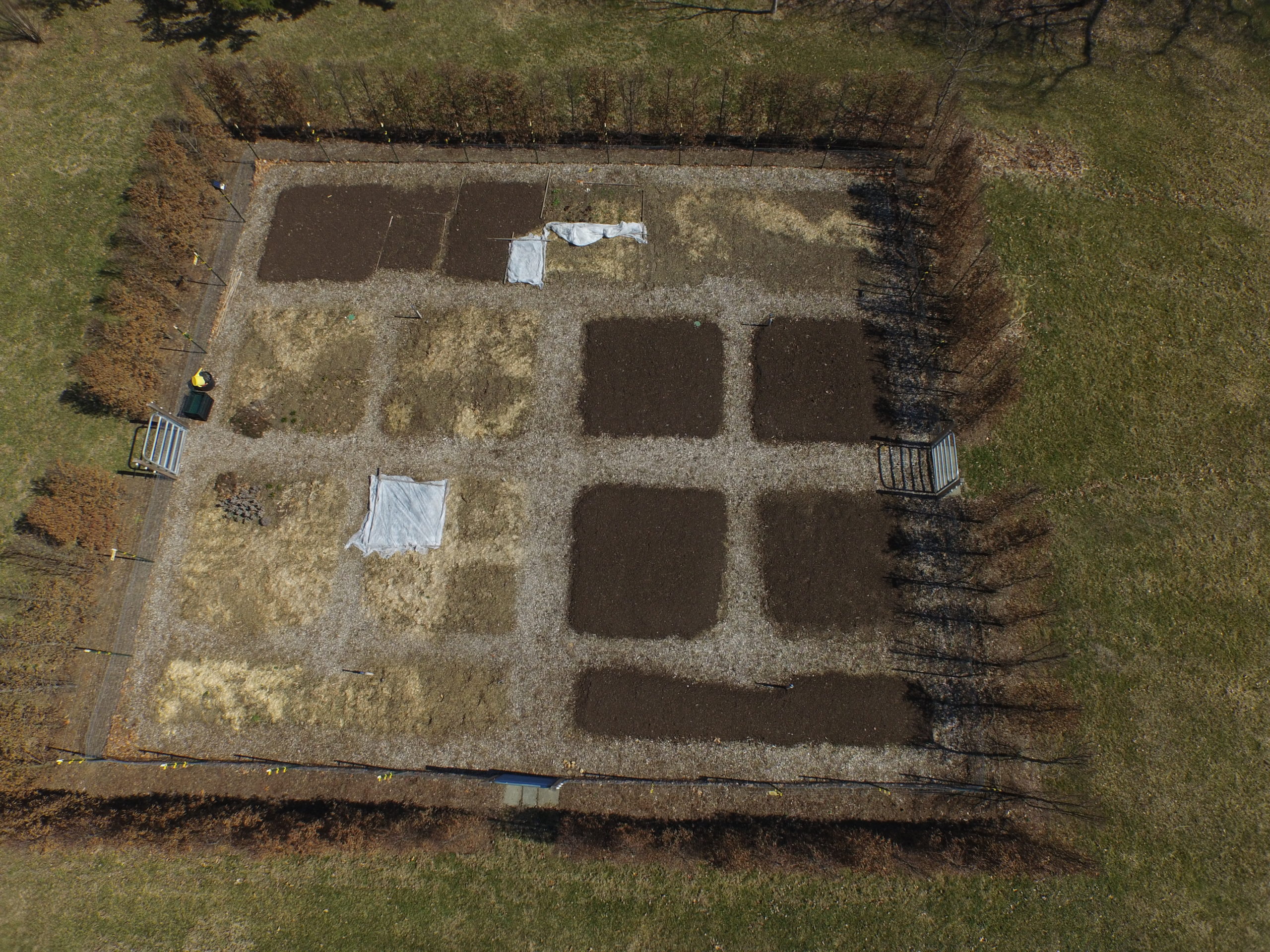 A drone’s eye view of a large vegetable garden surrounded by a hornbeam hedge with an electric fence on the inside of the hedge. The bottom left bed is asparagus, which can’t shade any other garden plants. Each bed has its own trickle irrigation with hose bibs down the center aisle (top to bottom). A better layout would have yielded more efficient use of space, but in this case "looks" came before practicality. The entire garden is about 4,000 square feet. 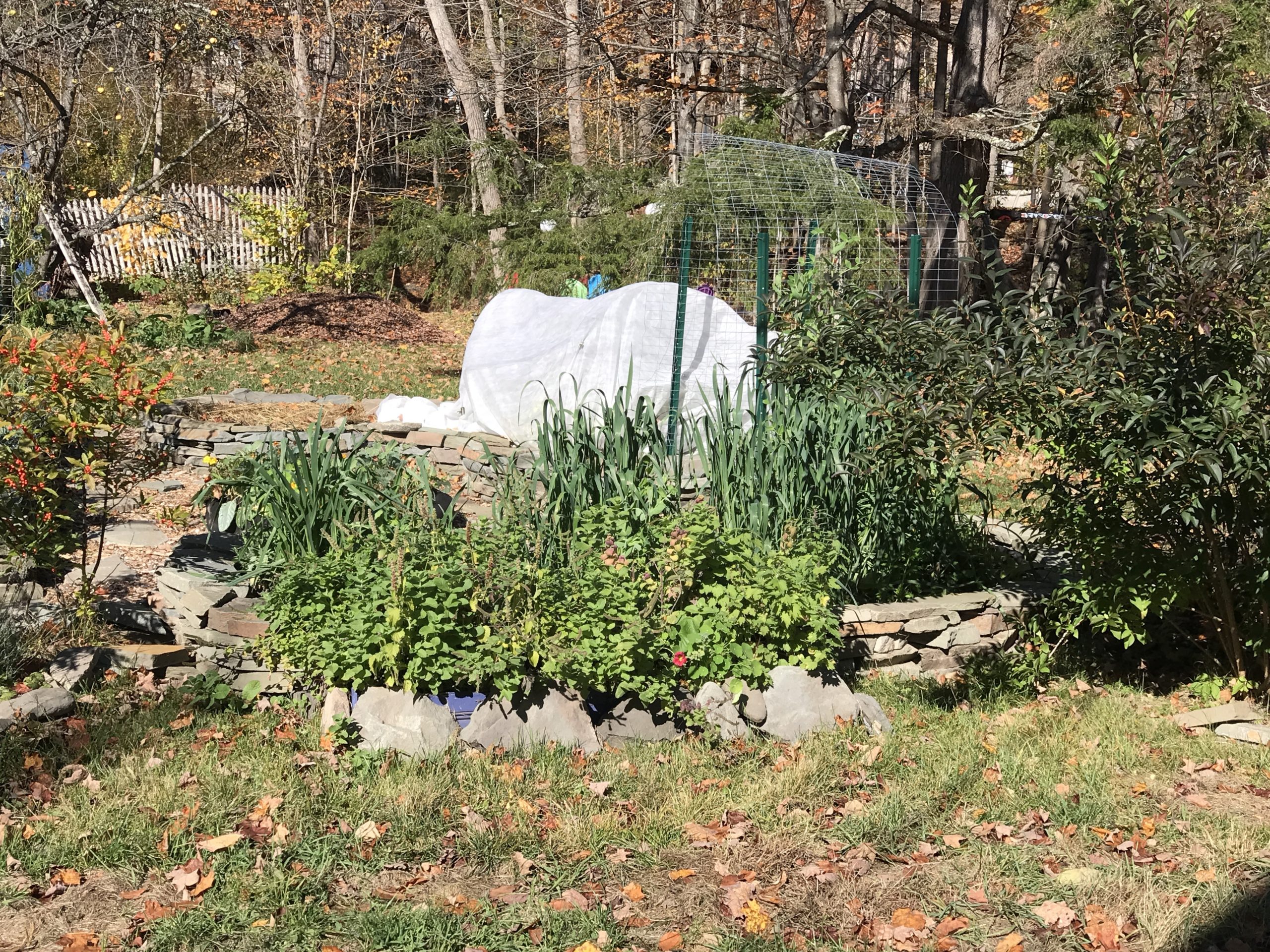 On the more modest side, this family built whimsical stone enclosed beds for a variety of crops from leeks to peas and corn to tomatoes and potatoes and herbs. ANDREW MESSINGER 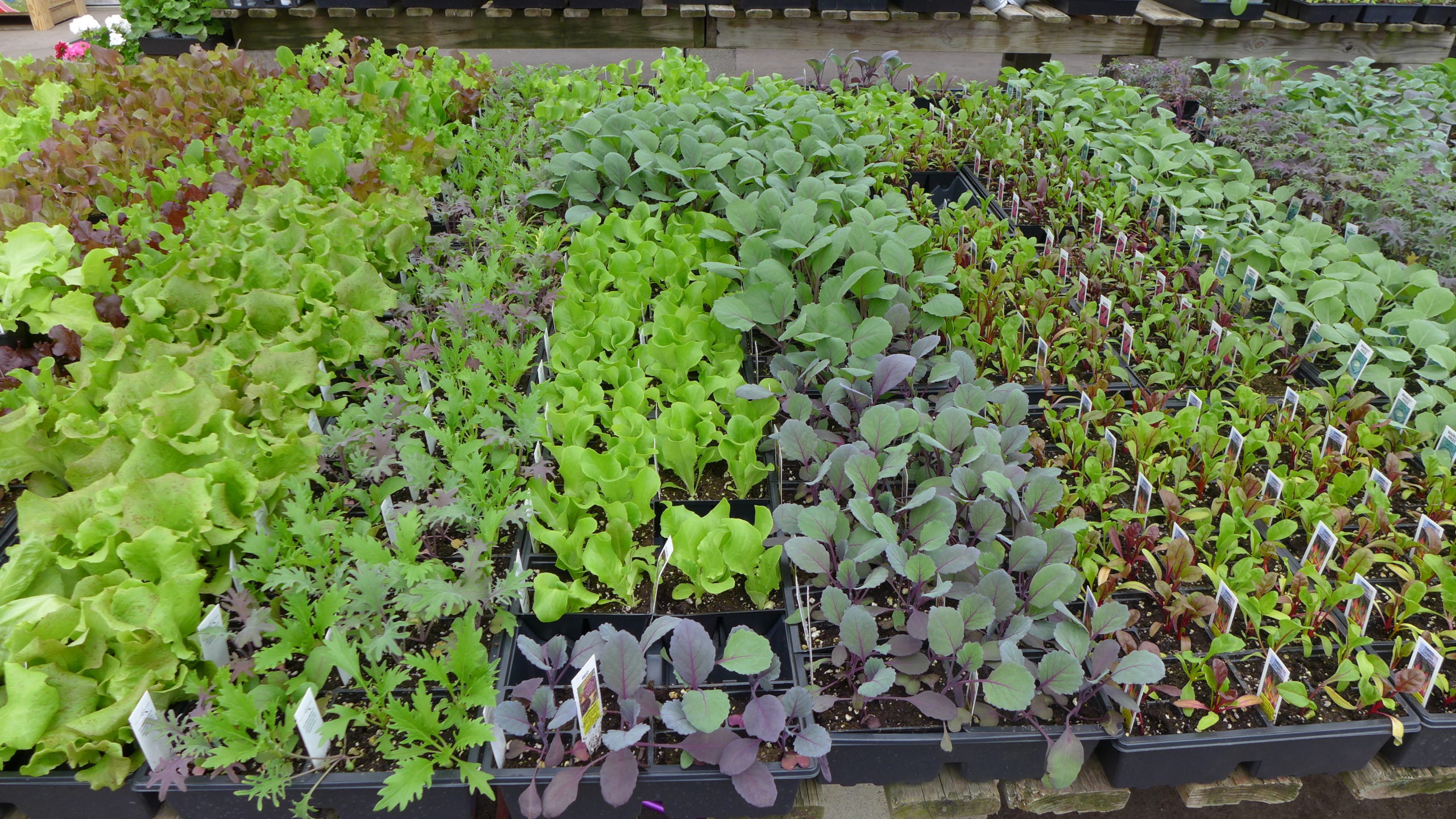 Gardeners take heart. In about 65 days, veggie transplants like these will be in local garden centers ready for planting. Will your garden be ready? ANDREW MESSINGER 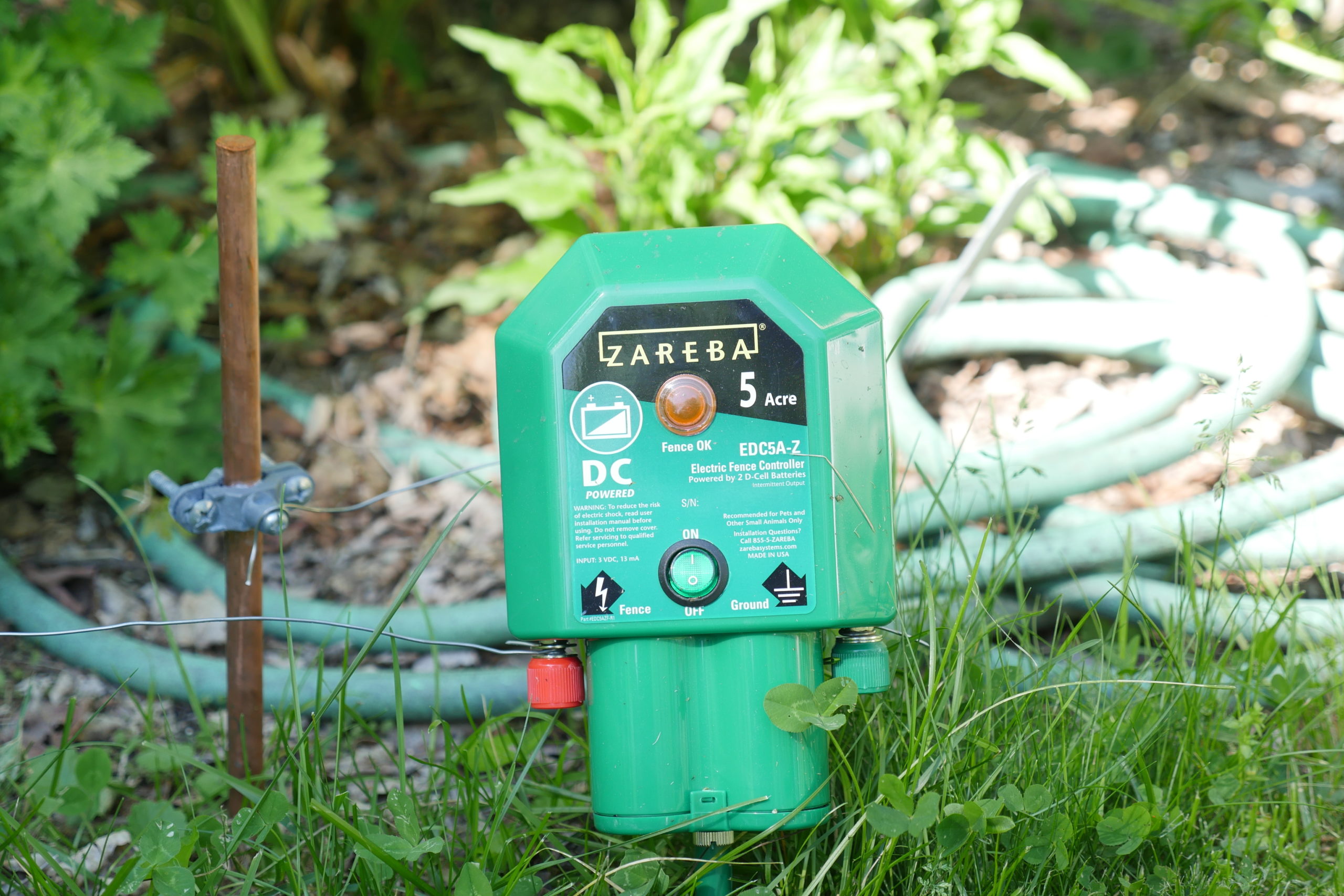 This is the small power unit for a Zebra electric fence. It only needs four “D” cell batteries to deter rabbits, squirrels and raccoons. Using higher rows of wire, it can also give small deer a shock to remember. ANDREW MESSINGER 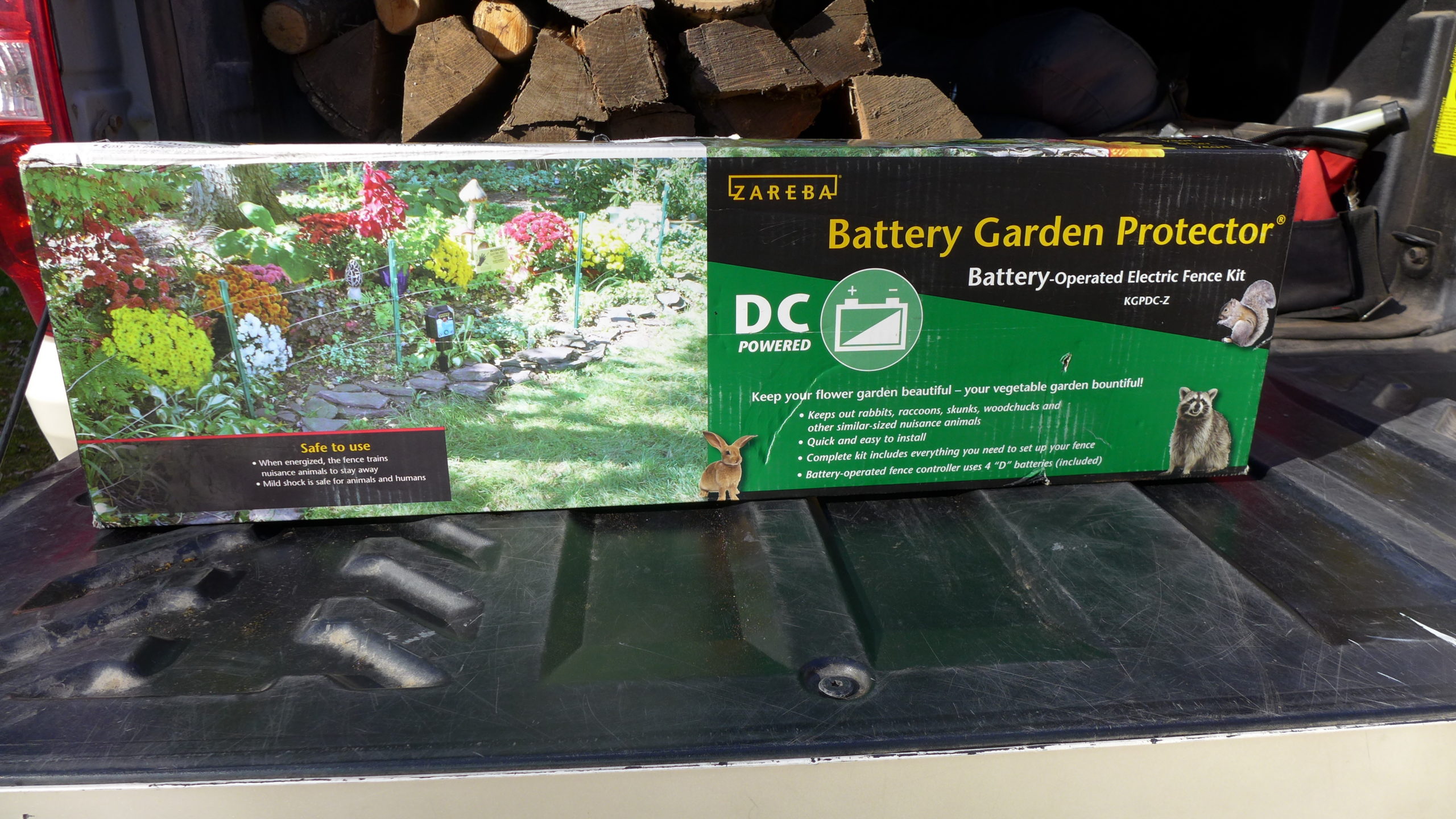 The Zebra Battery Garden Protector is about $120 for a starter electric fence that can protect most modest-size home veggie gardens. ANDREW MESSINGER

If you’re new to vegetable gardening or even if you’ve been at it for a while, there are some important technical aspects to your veggie garden that you should consider before doing any planting or planning this year. It all revolves around the efficient and economical use of your space.

Most of us have limited space so efficiency is critical. But even if you have a large area to use, the right use of that space will save you time and increase what you can grow and how much you can grow.

Location, location, location. How many times do we hear that? It’s true in real estate and just as true for the vegetable garden. I’ve noticed that many gardeners like to put their veggie garden in a corner or out of the way like at the edge of the woods. This often inhibits the amount of sunlight that your garden gets and most of our vegetables, especially tomatoes, peppers, squash and melons need a minimum of six hours of sunlight every day. Woods and trees nearby can cut down on this sunlight as can nearby buildings. Not just your house, but sheds and garages can cast shadows that last for hours.

The owners of one large veggie garden that I consulted on several years ago didn’t want to see the garden so they spent over $50,000 surrounding it with a hornbeam hedge. The hedge was about 10 feet tall and very dense. This blocked sunlight in the morning and shadowed 20 to 30 percent of the garden in the afternoon. It also meant that the interior perimeter of the garden was virtually useless for most of the season due to the shadows cast.

In another situation, a family up the street wanted a vegetable garden so they cleared a small plot of land on the north edge of their lawn at the edge of the woods. They figured that on the north side the woods would never block the sun. But what they hadn’t considered was that the overhang of the tree branches, which were leafless at the planning stage, ended up shading the garden for a good portion of the morning.

A vegetable garden shouldn’t be something you want to hide. It needs lots and lots of sun and a thoughtfully planned garden can be attractive, interesting and even whimsical. Shadows should be nonexistent or at a bare minimum.

There are other location considerations, though. Is there water available at the site, or will you have to drag hoses or even worse, lug watering cans from the nearest hose bib? A hose bib right in the garden is indispensable. Installing one can be a do-it-yourself project if you can bury a black poly water line yourself. It doesn’t have to connect to a water main or the house directly, but it should begin near a hose bib at the house or at a nearby location. It’s really simple to set up a connection system so your poly line can be connected to your hose bib using a “Y” connection at the bib.

Next is fencing. Yes, you have to fence your garden. If you want to keep rabbits out you’ll need to install rabbit fencing, and this needs to go into the ground a bit as well as above the ground. I suspect, though, that you may have deer issues as well. To keep deer out of a small garden is easier than keeping them out of a large garden. Deer fencing needs to be 7 feet tall or taller. It doesn’t have to be a dense fence, but it does need to make it difficult for them to get through or over it. Electric fencing is a great alternative, and these can be easily powered by a solar panel and battery. Here’s a link to the one I’ve used that’s powered by a few D cell batteries. More than enough to keep the rabbits out and give you a good zap if you’re not careful: bit.ly/3oSEIVd

Location isn’t just about where your vegetable garden is located. It’s also about where your vegetables are located within your garden. Two things to consider here. First is how long it takes a given crop to mature. Second is how tall will a given crop be. Few of us grow corn in our gardens, but if you do, remember that most corn grows 4 to 6 feet tall. If you plant corn in the south or west portion of your garden it will shade any nearby crops and rob them of much needed light. This is also true of taller bean crops, peas and indeterminate tomatoes whose vines can be 12 feet long and longer. Grafted tomatoes also grow quite tall and they tend to fruit later than standard tomatoes so that’s another consideration. Asparagus, which is one of our few perennial vegetables, should go in a corner where the plants can stay for years and where their tall plume stalks that feed the roots for next year won’t shade other crops.

If you have a larger vegetable garden, the crops will probably do well if they are mostly in an east-west orientation.

If you’re not familiar with companion planting this is a topic where you should do some homework and you can start here: bit.ly/3qvZuur. Some plants do really well when planted together or near each other. The reverse is true as well so you need to know what works and what doesn’t.

Succession planting is also critical especially if you have a smaller garden. Succession planting allows you to use your space economically and efficiently. The best example is if you grow radishes. This is a fast and early crop. In a month, some varieties can be over and done. Why leave that space empty when a second later crop can go into that spot?

Also consider using bush varieties instead of vine varieties. Not long ago we had no choices and cucumbers, squashes, melons and other vine crops had to be given huge amounts of space so their vines could sprawl. All of these now have bush-type relatives that take up much less space and tend to be even more productive. Vertical growing is also another way to maximize the use of space but keep in mind that anything that takes up height can also rob other crops of needed light.

If you have little to no space for vegetables, you can use your balcony, porch, deck or walkway by growing vegetables in pots. You’ll find many varieties from cucumbers to zucchini that have been bred specifically for pot culture,and you’ll find these in the catalogs.

Want to learn more? Suffolk Cooperative Extension is a great source of information and help for your vegetable garden. If you follow this link it will take you to their main vegetable garden page where you can feast on over 15 topics that you’ll probably find very helpful: bit.ly/3nPVfYI.

Next week, getting it all started. Keep growing.

This is the time of year when all home gardeners should be out pruning their fruit trees. There’s time, but don’t procrastinate. When doing this work, your tools should always be clean to reduce disease spreading from your tools. Alcohol works, and I’ve read that milk can do the trick as well.

This is also a great time to do major renovations on privet hedges, or what once was a privet hedge. This vigorous shrub will take heavy pruning, almost down to the ground, and still come back and thrive. The heartier the prune, the longer the shrub will take to recover, but now, when there’s no foliage, it’s a pretty simple renovation job. Don’t expect a 10-foot hedge pruned to 4 feet to recover more than a few feet per year. On the other hand, whatever you leave behind will fill in much more densely than what you had last year.