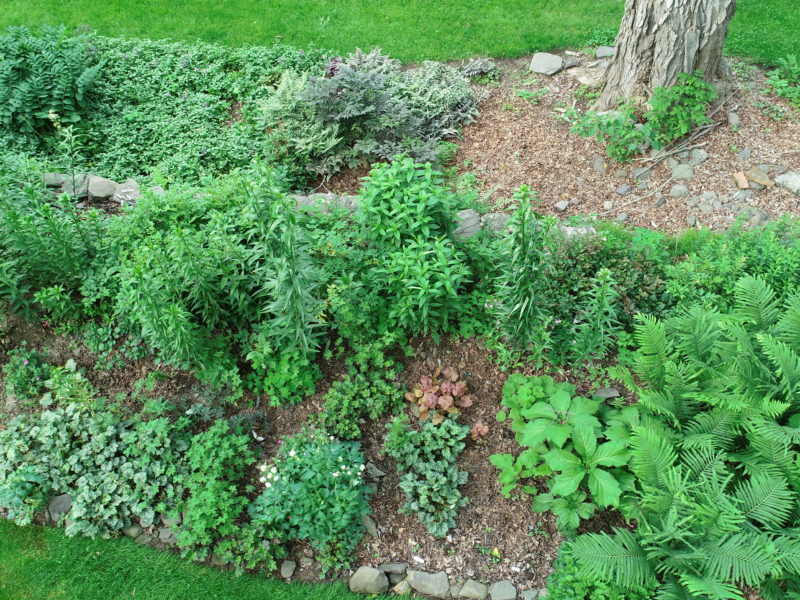 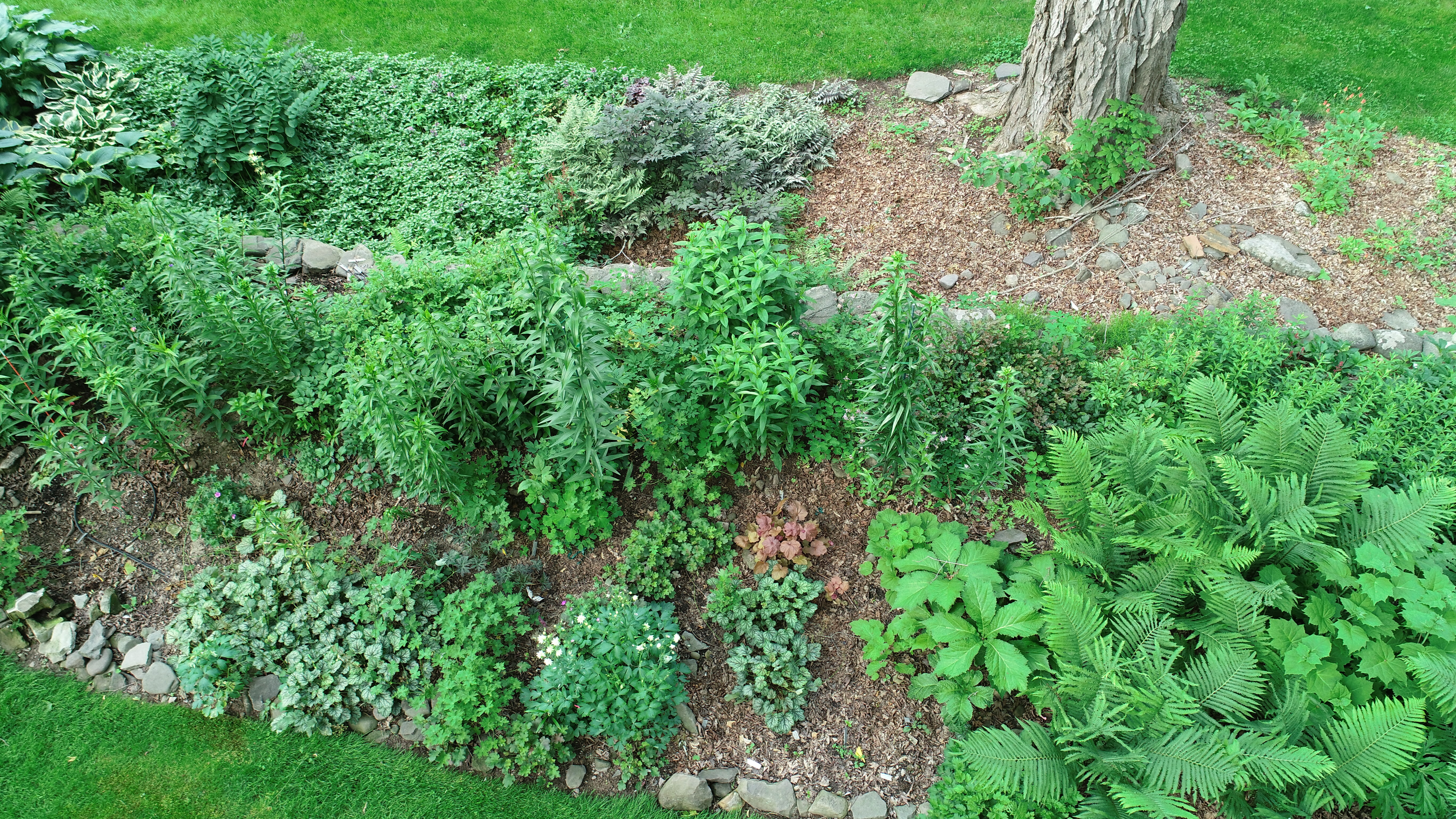 This drone shot gives a very different perspective as opposed to simply looking inward at ground level. There are numerous opportunities in this garden. While the view from the ground gives a sense of height, this view shows planting opportunities not seen as a bystander. 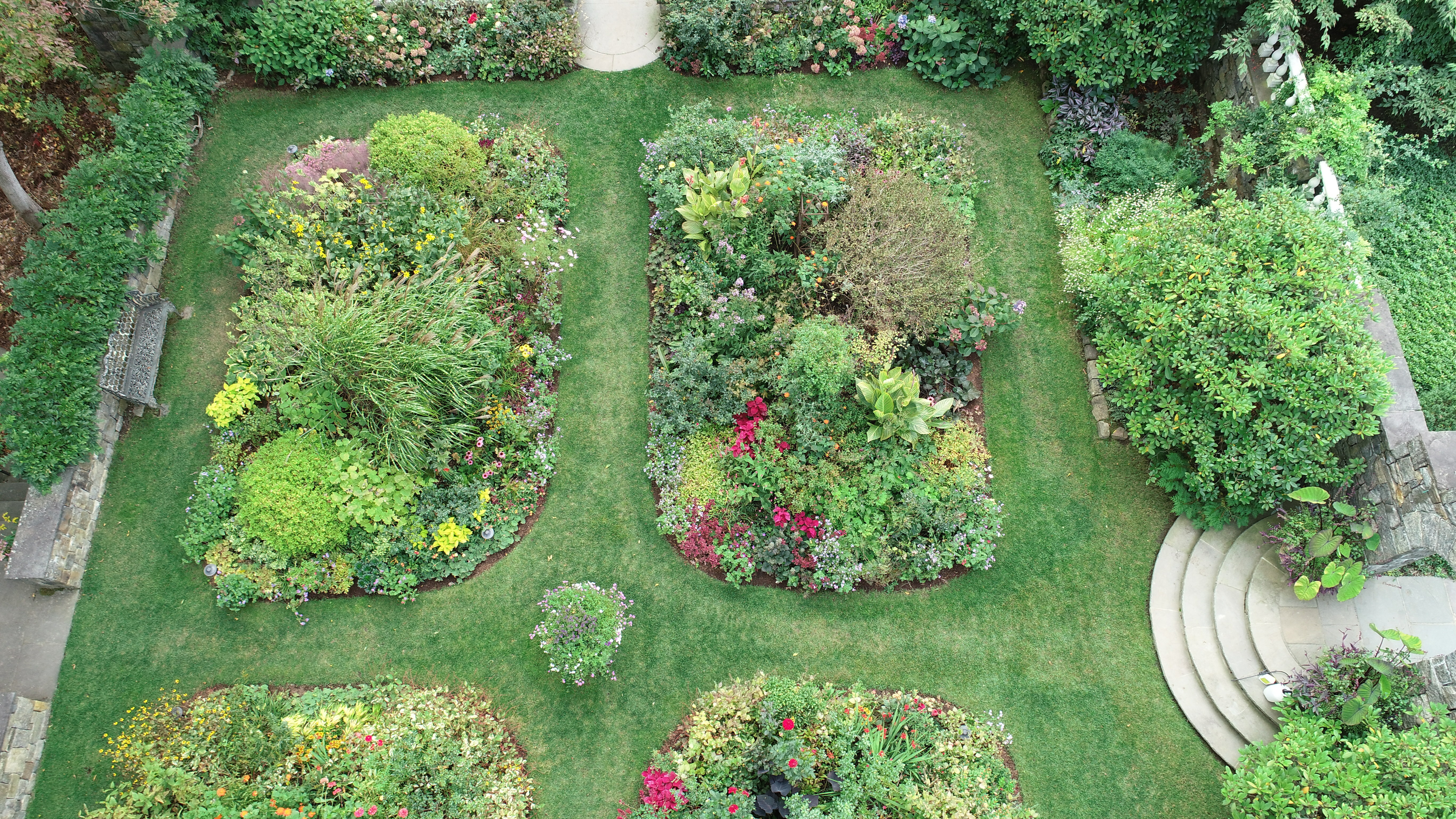 Drone views of gardens can reveal plant density as well as under or unutilized space. Can you spot areas in these gardens that might be ‘opportunity’ spots for next year? THG AVIATION 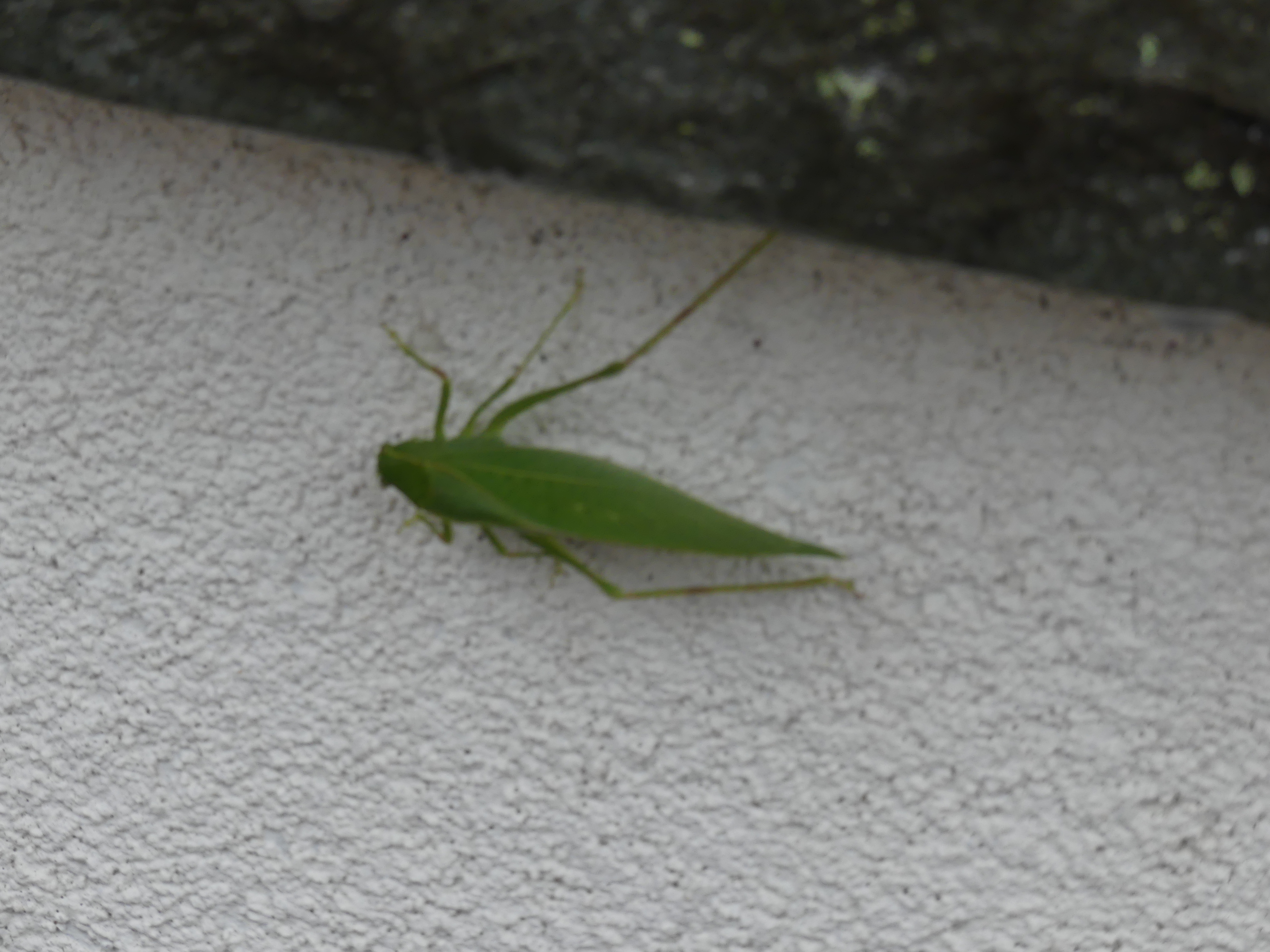 Several readers have reported seeing katydids on homes and walls and wondered if they were one of the invader insects discussed last week. They are not. They’re a variety of cricket that has just laid eggs and are at the end of their life cycle. ANDREW MESSINGER 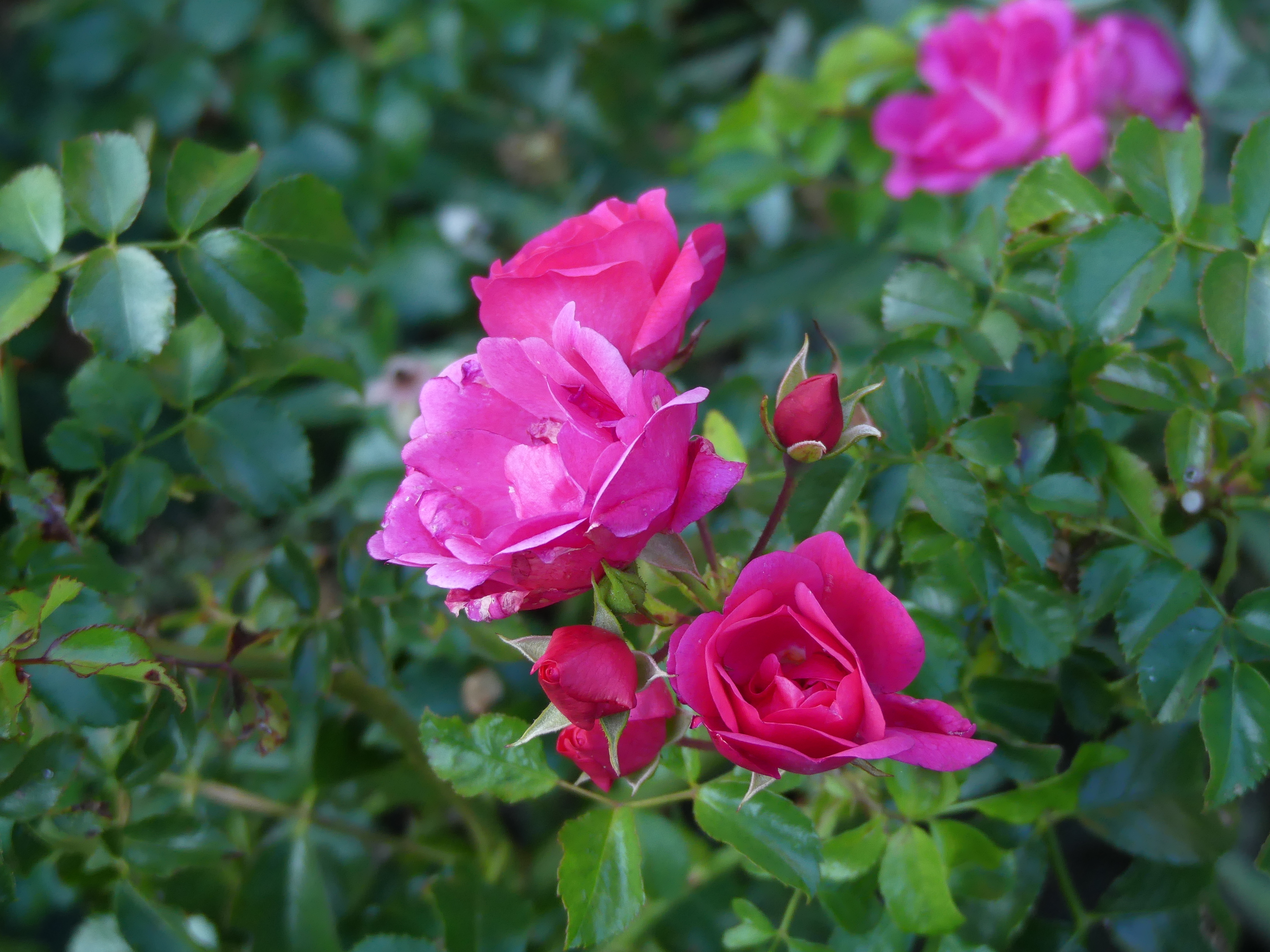 These roses were still blooming and in their glory last weekend. If we don’t have a hard freeze many roses will continue to bloom as late as Thanksgiving so hold off on pruning them back if they are budded. 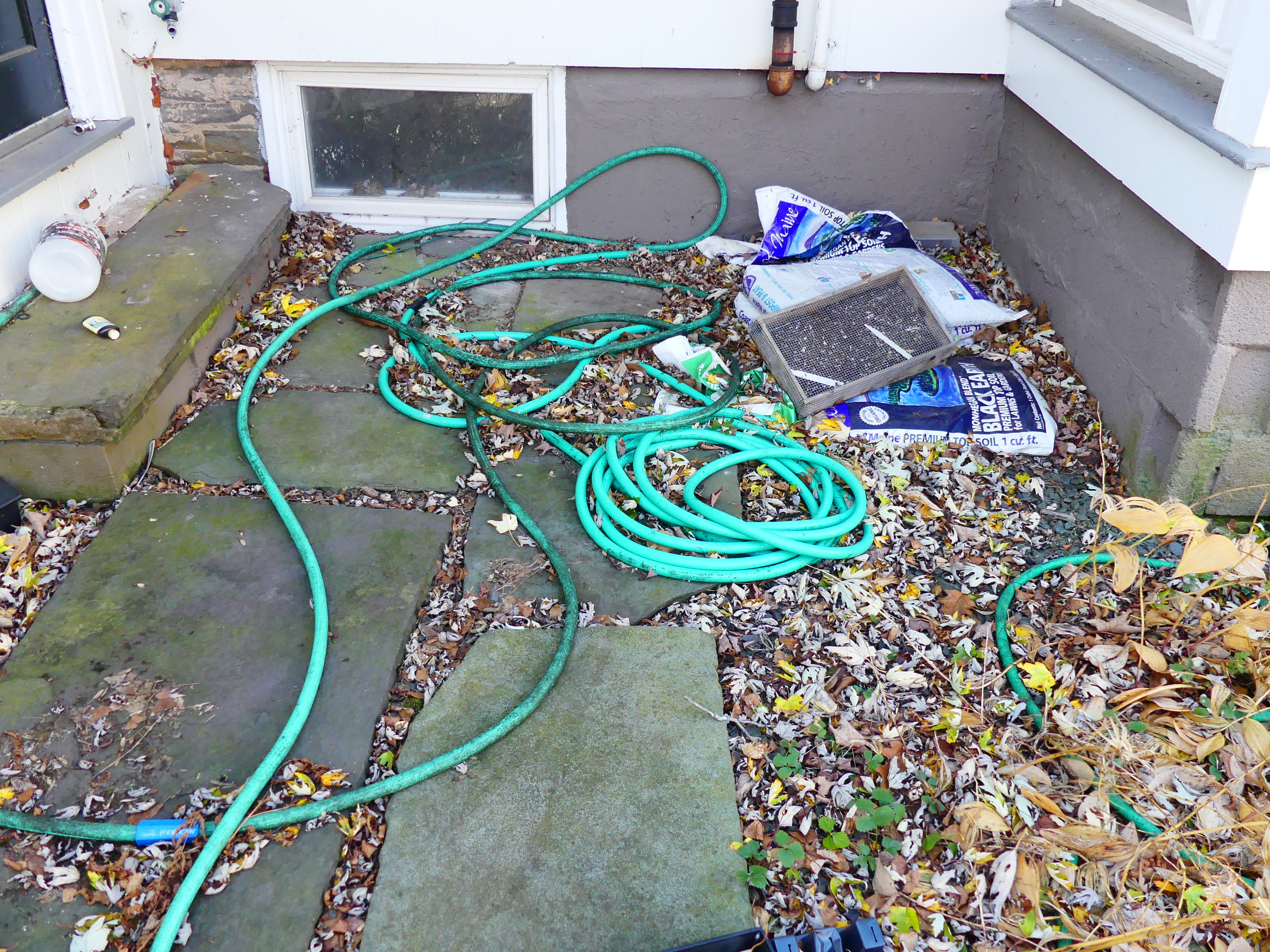 At 7 a.m. on November 2 Westhampton Beach recorded 31 degrees. Once it drops below 40 degrees, most garden hoses become stiff and hard to coil for storage. On a sunny day stretch them out in the sun, allow them to drain, then coil and store for the winter. ANDREW MESSINGER Several readers have reported seeing katydids on homes and walls and wondered if they were one of the invader insects discussed last week. They are not. They’re a variety of cricket that has just laid eggs and are at the end of their life cycle. DANA SHAW Several readers have reported seeing katydids on homes and walls and wondered if they were one of the invader insects discussed last week. They are not. They’re a variety of cricket that has just laid eggs and are at the end of their life cycle. DANA SHAW

With the effects of climate change, it seems to get harder and harder each year to figure out when we should take seriously the task of getting our gardens and tools ready for the end of the season.

September was the second warmest on record, and it was so mild through October that many of my plants that had seriously considered it being the end of the growing season are now rebudded and reblooming. Fall leafy greens and root crops in the vegetable garden just keep going and growing.

If you have faith in statistics, those numbers say that there’s a 70 percent chance we’ll hit 32 degrees this week and a 70 percent chance that we’ll have a hard freeze by Thanksgiving. But what we do know with some certainty is that it will get colder, and we will certainly have a frost and freeze in the next several weeks. As for the winter outlook, well, someone told me they found a woolly bear caterpillar with only one dark ring. So, if you subscribe to old wives’ tales, that means a very cold winter. But I’ve also seen some long-range forecasting that is calling for winter with more snow and cold than we’ve become accustomed to.

The bottom line is that it’s not too soon to get ready and think things through. Also keep in mind that you may be mowing and blowing for a few more weeks, but it’s doubtful that you need to keep your irrigation and sprinklers at the ready as we’ve been getting plenty of rain and as the air and soil cools, evaporation slows dramatically.

If your garden is still active or if you can still pick out the vestiges of plantings and plants, this may be your last chance to take some pictures and jot some notes. I did some drone work last week on a property where the owner has extensive planting beds and she knew I’d written a few years ago about how important I thought drones could be in documenting empty and underutilized space in gardens. The view from above gives you a very new perspective on where you left open spots and spaces and looking at these pictures over the winter can help in planning for better space utilization in next year’s garden.

But beyond these aerial views it’s really important to make some notes as you walk around so you have a record of what did well, what didn’t and what you want to change next year. I start these notes in the spring and continue to update them through the fall. The spring notes come in handy now as there are reminders of plants that can be divided and moved at this time of the year that will enhance the garden next year. Among others, this included hostas, peonies, astilbes, tall garden phlox and a host of other plants that can be divided and moved now as they flower after the first spring flush next year and into the summer.

If you plan on digging dahlias and cannas or, for that matter, any of the tender plants and bulbs that you can overwinter in a cold but not freezing location (as in a basement or crawl space) this would be a good opportunity to make sure you give the plants tags that can be dug with the plants. That way, you’ll know the variety or, at the very least, the color and height. Pictures can help as well, but you’ll need a system to match the pictures with the tubers, corms or roots that you’ve dug. If you don’t do this simple task then confusion is guaranteed at planting time next year.

And, of course, there are the leaves. I dutifully blew and raked the leaves from the lawn, but only where they were so dense that my mulching mower wouldn’t do them justice, then I mowed. It’s just amazing how spectacular the lawn looks at this time of the year, and it’s even more astonishing how weedy it can look in August. Well, no sooner did I have it cut and looking terrific than we had a good rain, some good wind and the leaves covered everything yet again.

Some of these leaves just get blown into beds where the plants are already done for the season, but I leave them unpacked and fluffy. Where I can, I blow the leaves around the base of the maples and other large trees where I “bank” them for another month or so until I use them as a mulch in other beds that appreciate a modicum of winter protection. The rest of the leaves get raked onto large tarps, which in turn get dragged behind the barn, where they go into piles. These piles build up for several weeks. Then as things slow down I’ll drag the shredder out of the barn and spend a few hours passing them through the shredder, reducing the piles by about 80 percent. But what I end up with is a brown gold that’s a combination of maple, oak and other deciduous foliage that either gets worked into the compost pile or added to the gardens later on as a very light mulch that has a very high insulation value.

And speaking of the compost pile, remember that a well-tended and fed compost pile will continue to cook and work well into December and sometimes beyond. Continue to add both green and brown garden debris to the pile and it will continue to cook. I’m really a compost fanatic and each fall I’m amazed at how much I’ve been able to compost during the growing season and the rich, dark humus that’s so easy to produce. My property is just under an acre but with the kitchen waste and garden disposables that go into it from April till November I can usually depend on at least 1 or 2 cubic yards of usable, rich humus next planting season that is so very important in building up our sandy soils.

Oh, and that pumpkin or pumpkins that you had out for Halloween? If the raccoons haven’t ripped them to shreds (or even if they have) and if you’re ready to give them up, they make great additions to the compost pile. Cut them into pieces and mix them in with everything else, and they’ll just melt away into humusland.

Chances are you’re finished with your hoses and sprinklers. I always forget to get a sprinkler or two into the barn before there’s a freeze and just a few drops of water in them at the wrong spot results in cracks and breaks that can’t be repaired. So, if you’re done with them, drain them and get them stored. You may find the need for a hose in the next few weeks but remember that as it gets colder garden hoses get harder to coil and neatly store for the winter. Maybe all you need for the next few weeks is a watering can? If that’s the case then stretch out your hoses on a nice sunny day, let them drain, then coil them and store them. Trust me, it isn’t fun trying to put away a few hundred feet of stiff hoses when it’s cold out.

In last week’s column I discussed the fall insects that we call the invader bugs — the ones that hang out outside and try to get inside as the weather cools. There are a large number of katydids around this year. They’re large, light green and somewhat menacing because of their size, but they are harmless. Related to crickets, they have just finished laying their eggs on twigs nearby and are simply seeking the warmth of the sun. They do not overwinter and will shortly become part of the season past. Keep growing.