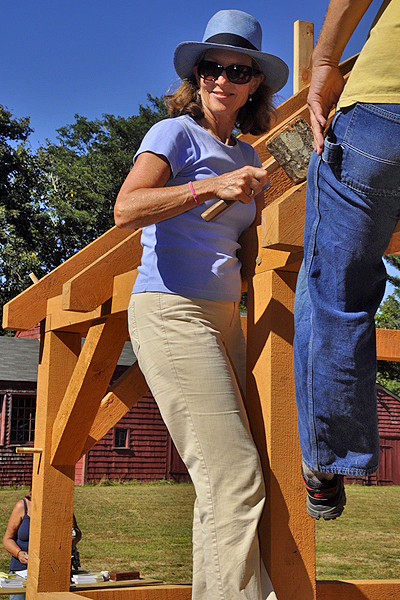 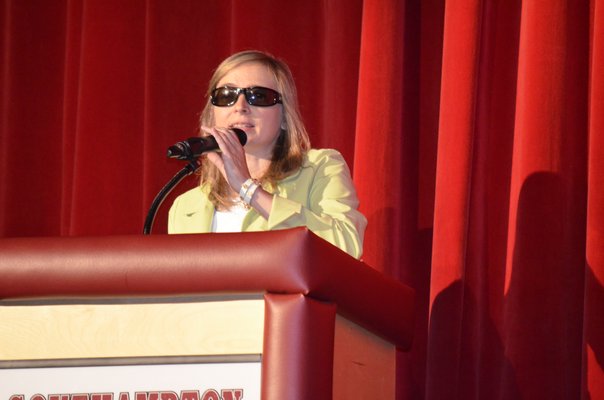 Ike Fagin, front, and Caroline and Aaron Campbell work on the first wall of the mini barn. MICHELLE TRAURING 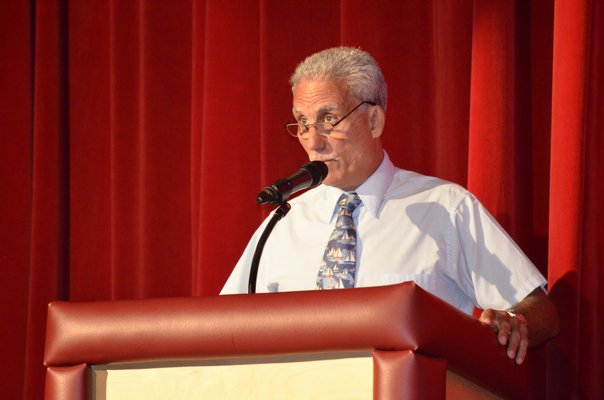 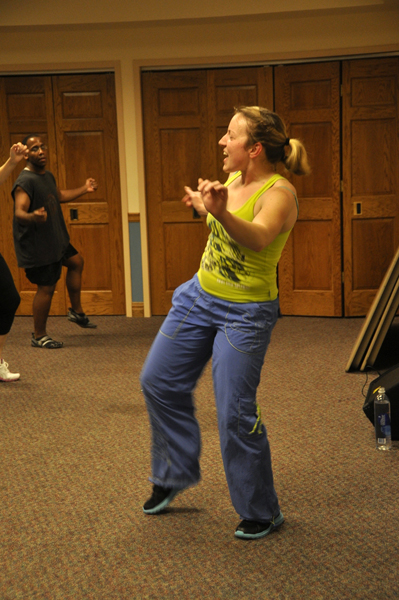 Working on the second wall of the mini barn. MICHELLE TRAURING 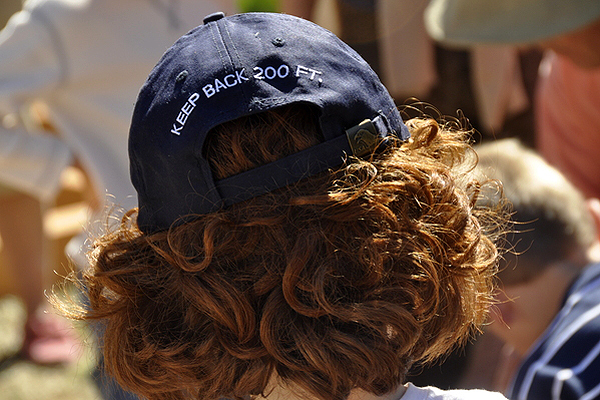 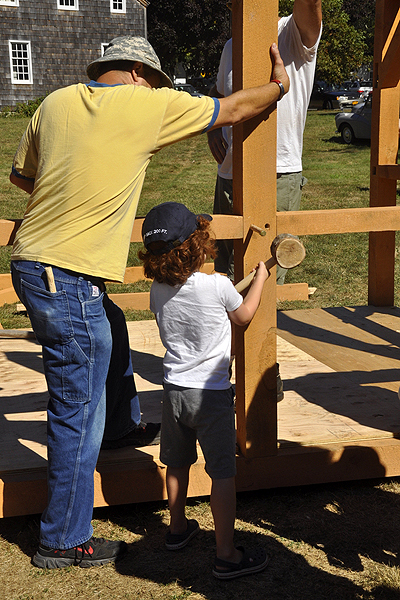 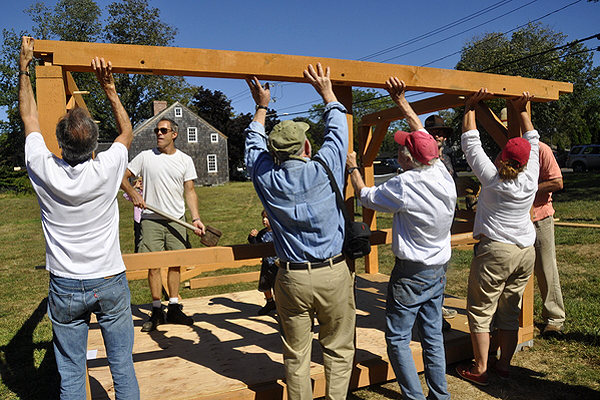 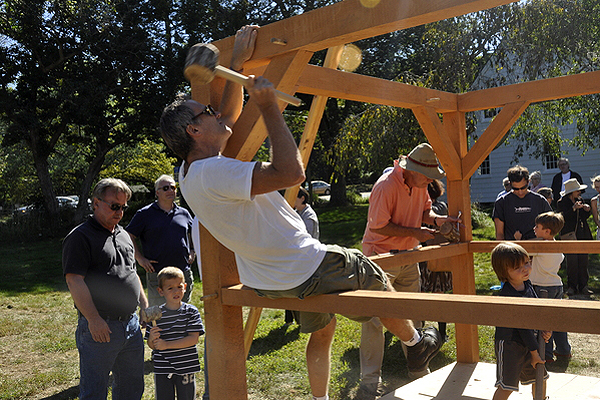 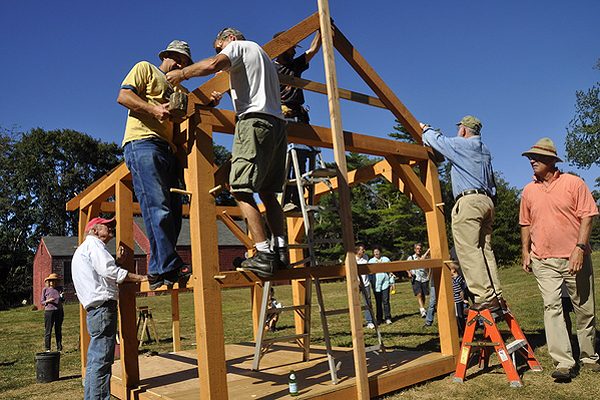 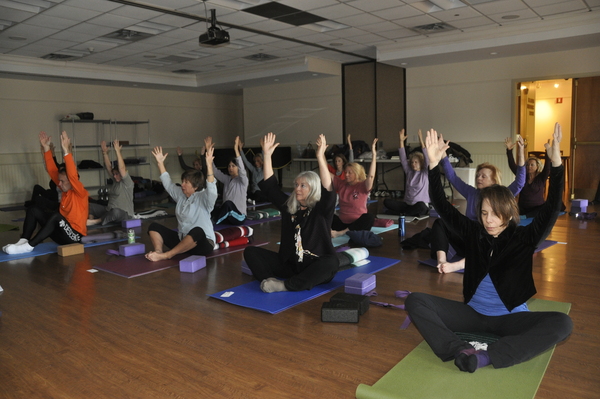 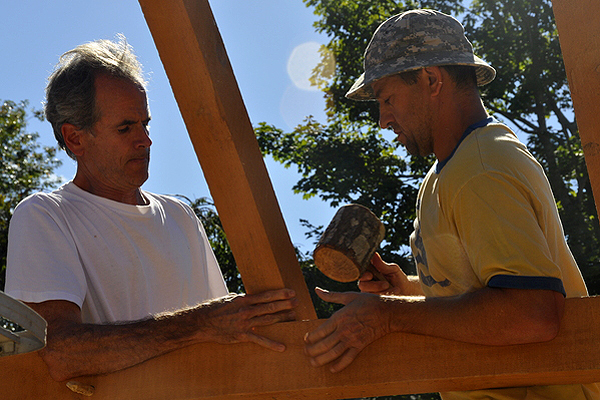 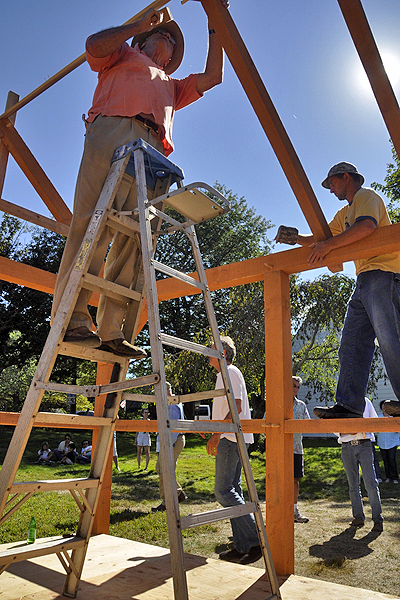 And the young boy’s peers took heed at the first-ever mini barn raising last Saturday on the Amagansett Historical Association grounds. Ike was one of the first kids to grab a wooden mallet.

“It’s fun, being able to hit things,” the 7-year-old said, giving the tool a practice swing.

Under a cloudless sky, about 50 people crowded around David Stiles—owner of East Hampton-based Stiles Design and co-author of 22 building books with his wife, Jeanie—and a timber-frame kit for an 8-foot-by-11-foot barn. It was laid out on the grass in more than a dozen pieces, waiting to be assembled without the help of any hardware.

With four short clangs of an iron triangle at just after 2 p.m., Mr. Stiles welcomed everyone and began.

“This was made by the Amish,” he explained, gesturing to the post-and-beam kit. “Each joint is handmade with a saw, a mallet and a chisel. They sent this down to us and we’re doing a demonstration on how these joints were made years and years back. This was done in the Neolithic times, these joints. Each one took an Amish person about an hour to make. Very time consuming, but you’ll see, once the frame is up, even without pegs, it’s very, very strong.”

He selected six volunteers—all of them grown men—to help master carpenter Toby Haynes build the floor. A handful of children nearly tripped over themselves as they scrambled to assist.

The beams were too large for the small boys and girls, so they settled on hammering the pegs into the first wall. It was mostly their fathers and grandfathers who soon took over, taking a single swing to do what a child accomplished in 20.

“This is so exciting. I don’t know why, but it’s just a whole community thing,” onlooker Nancy Reardon mused. “You feel like you’re in the past somehow. It’s just the coolest thing I’ve done in years, and I’ve done a lot of cool things.”

Fifteen minutes later, the children dropped their hammers and four men stepped in. They yelled “Up!” and lifted the wall off the ground, fitting it into the constructed floor. The crowd erupted in hoots and applause. The first wall was a success.

So were the remaining three.

“You have opposing forces, the joints going in different directions, the triangulation in the corners,” explained Mr. Haynes, who built his own artist’s studio in England. “Each time you add a joint, you add an extra direction. So the rigidity is three-dimensional. One wall is kind of wobbly, two walls is strong, three walls is much stronger, four walls is unbreakable.”

Mallets in hand, a few participants circled the structure, giving some of the pegs a final whack.

“Kinda,” Ike responded distractedly, and then added, pointing up, “I wanna go to the top.”

“I’m not sure. We’ll have to refer to the man with the tool belt. He’s in charge,” Mr. Comella said, nodding to Mr. Haynes. “If there’s any more top work, we’ll do it.”

A few helpers organizing the beams for the roof smiled at the father-son exchange, and several audience members gathered closer to the barn to get a better look.

“They should do this every year. It would get bigger and bigger. Can’t you see that happening?” Ms. Reardon mused. “It’s almost an oxymoron, a barn raising in East Hampton, isn’t it? This opulent place. And everyone’s so thrilled to get down to the nitty-gritty and kind of do something from scratch instead of hiring other people to do it. Look how exciting. They’re doing it themselves.”

She gasped suddenly. “Oh my gosh,” she breathed out. “They’re putting the roof on!”

Collectively, the crowd inhaled and burst into another round of applause as a handful of men installed the finishing touches. And little over an hour later, the barn’s frame was finally complete.

“I’ve never seen a barn raising and this whole idea of doing it without nails, it’s extraordinary,” his wife, Ilia, added. “We’ve bought every single one of their books. David is such a superb craftsman that everything he builds is just beautiful. Beautiful, beautiful, beautiful.”

The Stileses are considering auctioning the barn and donating a portion of the proceeds to the Amagansett Historical Association, Ms. Stiles said. The kit usually runs $3,500 plus shipping, she said.

“We figure it’s a great idea for a little cottage in your backyard. You can use it as an artist studio or writer’s retreat, a pool house, home office, meditating, whatever,” she said. “It’s a pure, perfect little space. And I think everybody had a great time building it. Total family participation.”

As the crowd filed out, there was one noticeable straggler lingering behind.

“Do I get to keep this?” Ike asked Mr. Stiles, cautiously holding his wooden mallet up in the air.

“Yes, buddy, you get to keep it,” Mr. Stiles responded with a warm smile.

Ike grinned and skipped off to his father, wielding his prize, held high over his bouncing curls.