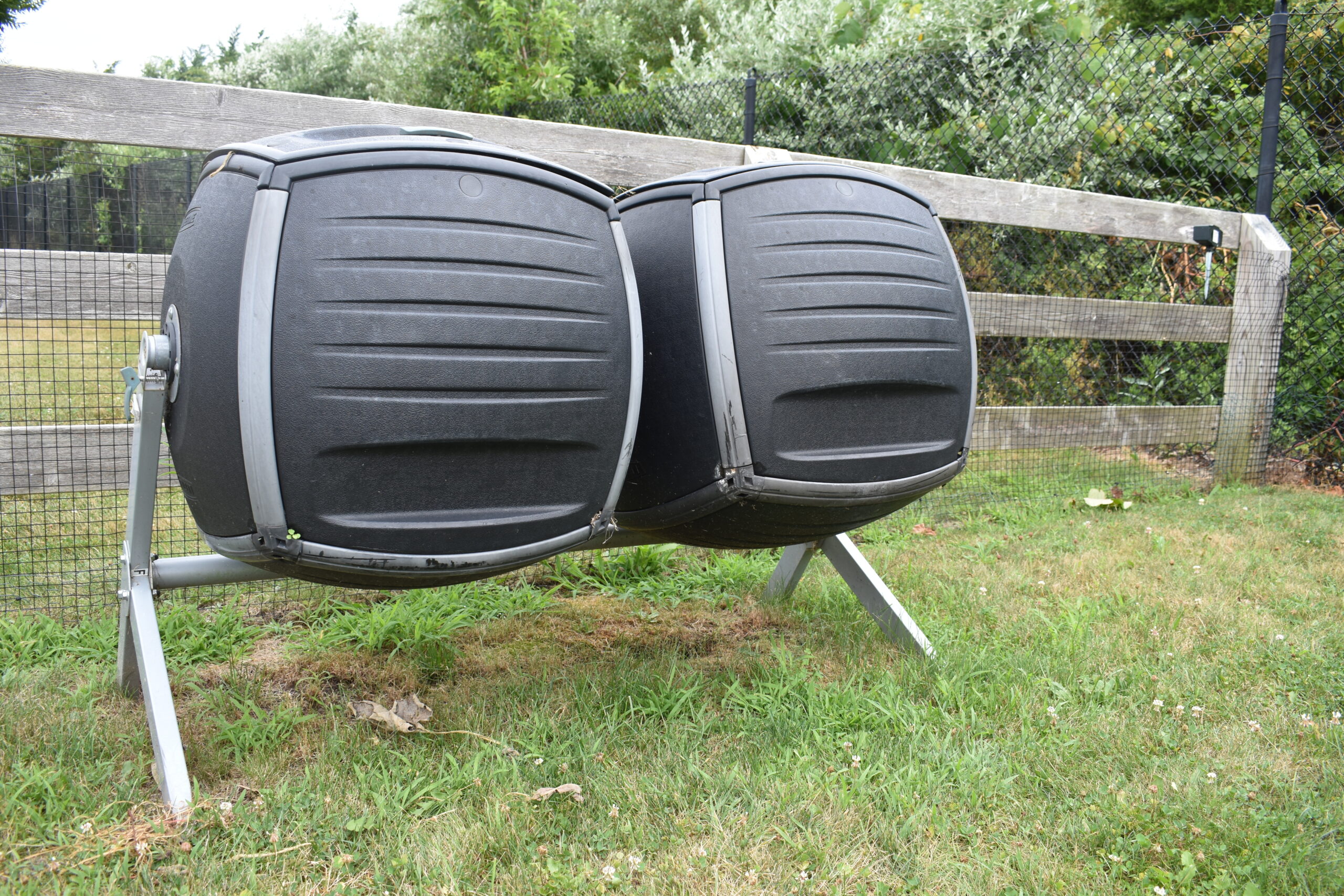 Compost tumblers are neater than a compost pile and they make it easy to turn the compost inputs. Turning helps to mix the inputs while introducing oxygen, accelerating decomposition. 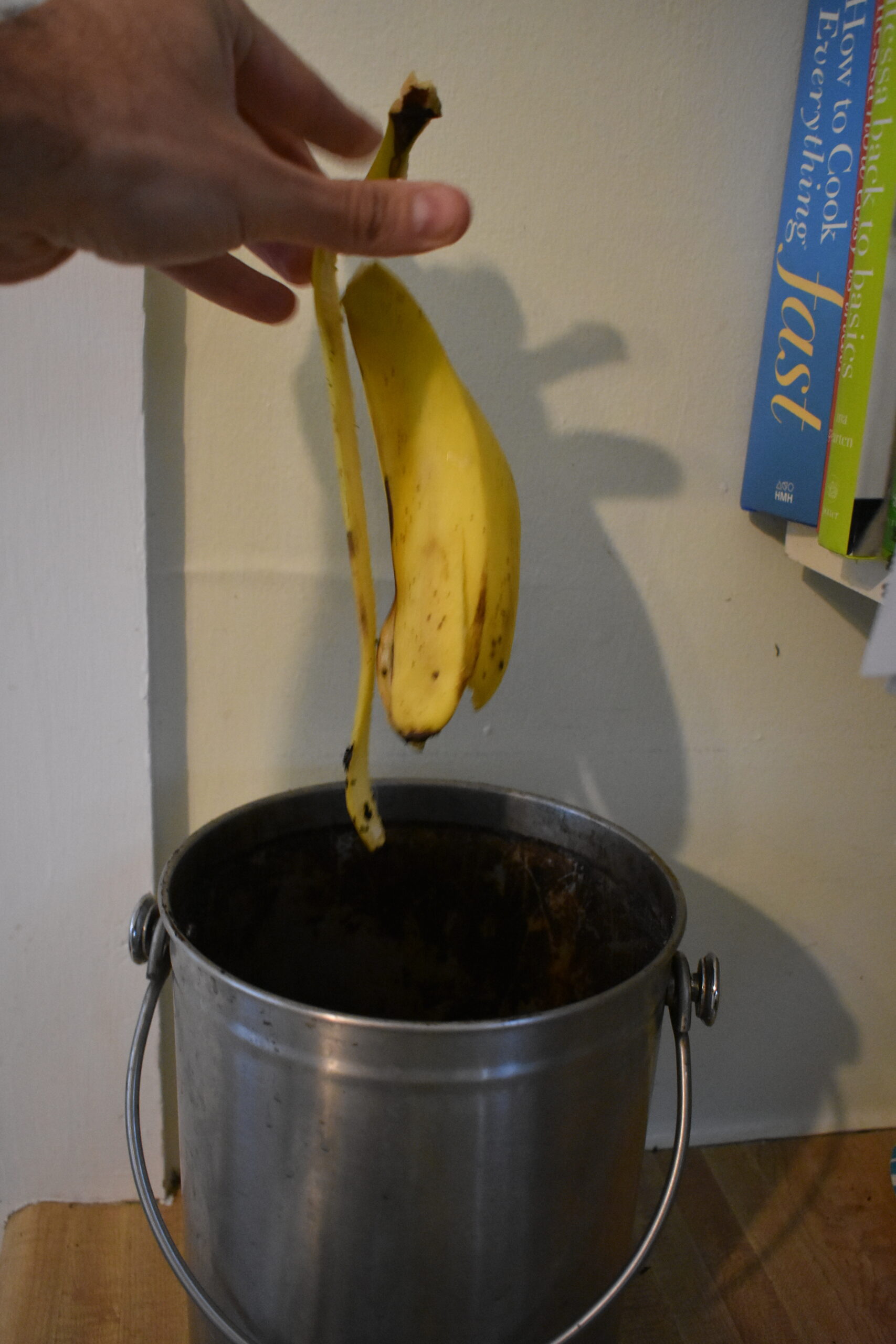 A countertop compost pail is a good tool for collecting banana peels, egg shells, coffee grounds, vegetable scraps and other organic waste in the kitchen before depositing it in a pile or tumbler outdoors. 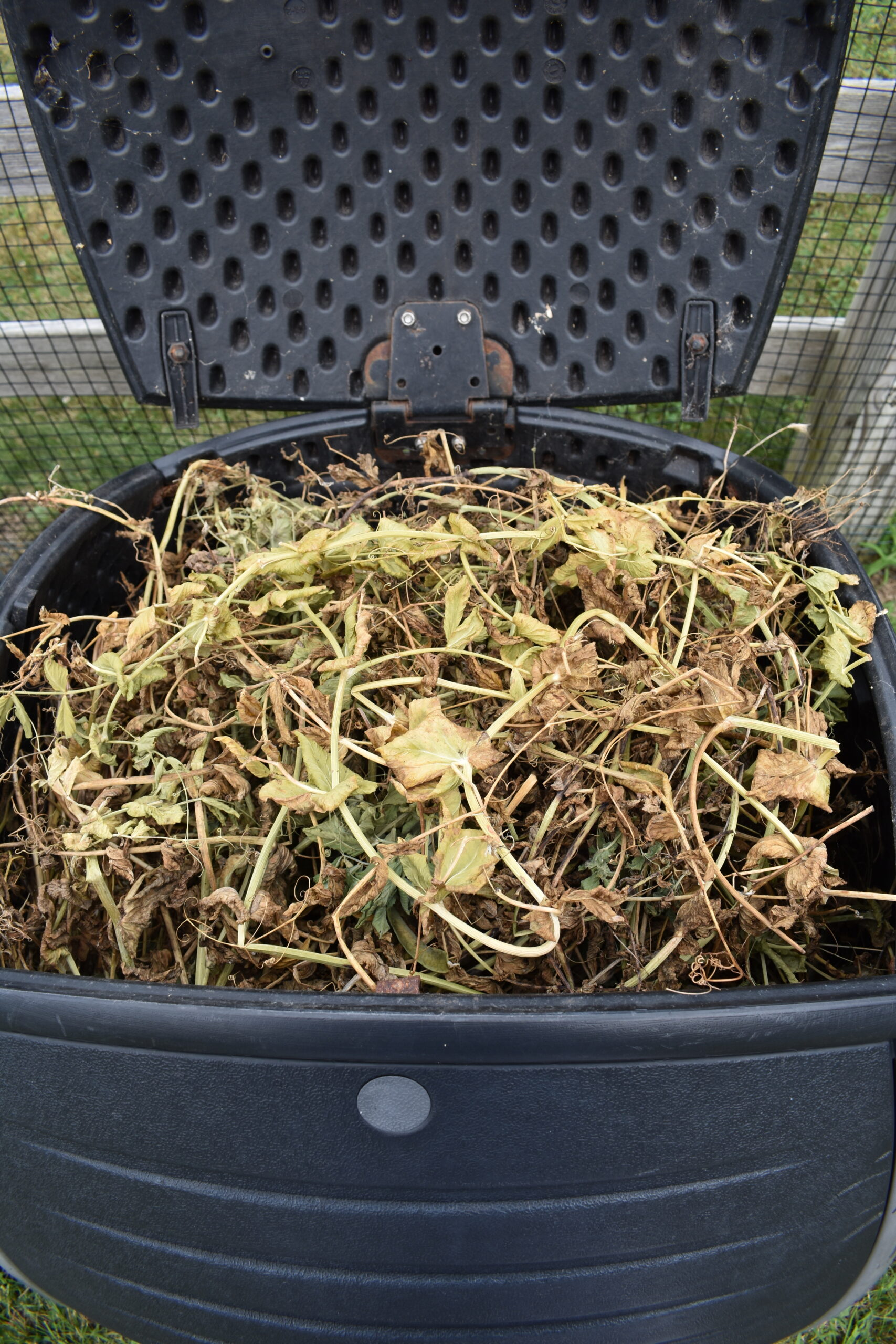 Fall leaves, weeds, spent plants and more yard debris can be added to compost bins rather than sent to a landfill. BRENDAN J. O'REILLY

It’s easy to disregard the banana peel that gets tossed every morning, or the vegetable scraps that land in the garbage while making dinner, and all of the other food waste that we produce daily — but it adds up.

On average, American households waste about one third of the food they acquire, according to numerous studies. Economists estimate the aggregate value totals $240 billion annually, which, divided among 128.6 million homes, equals about $1,866 per household each year.

But beyond the sheer waste of money lie environmental implications, too.

Most of the discarded food ends up in a landfill, emitting methane as it decomposes. According to the U.S. Environmental Protection Agency, municipal solid waste landfills are the third largest source of human-related methane emissions in the United States — which is much more efficient at trapping heat than carbon dioxide, accelerating the greenhouse effect.

“What we need to think about is, obviously, we shouldn’t have wasted the food in the first place,” explained Roxanne Zimmer, a community horticulture specialist from Cornell Cooperative Extension of Suffolk County. “But if it is going out, it should go into the compost pile rather than the landfill to reduce the methane production at the landfill.”

Composting, which has existed since the invention of agriculture, is one of the best ways to handle food waste, experts say. Composting is a process of deliberate decomposition to produce a material that can be used to return nutrients to soil. The principles of creating “black gold” are simple, and its effect on the climate is abundant.

“There’s an impact in terms of our human health, community health, health of the soil,” reported Paul Merkelson, the secretary of the ReWild Long Island board of directors. “Composting used to be a normal thing that most people did, certainly prior to World War II. It’s not something that’s difficult, specialized, esoteric — it’s just a normal thing to do. It’s a good habit that many people have done in the past and many more people are doing now.”

Whether you’re composting in a backyard pile, a turning drum, or even with worms, it’s important to follow basic principles. Avoid including meat, dairy, oil, greasy foods and highly acidic scraps, and try to maintain a three-to-one ratio of “browns” to “greens” — or carbon-rich to nitrogen-heavy materials.

Aeration and moisture will also affect the health of compost. Use a variety of inputs at different moisture levels and introduce air by turning, drilling holes, or otherwise. Compost not only keeps methane from being released into the atmosphere but also sequesters carbon, Zimmer notes.

“That compost makes soil healthier, to have greater ability to grab carbon dioxide from the air and become a carbon sink,” she said. “It’s kind of like a win-win.”

“Once you start to compost, it retains the water. It keeps it from running off,” he said. “It stops it from becoming stormwater. It stops it from going directly into the bay, the sound, the ocean. It slows the water down in that mini cycle, that small water cycle. It puts it back and recharges the aquifers.”

The term “drawdown” refers to a point in the future when levels of greenhouse gasses in the atmosphere stop climbing and begin to decline. For Drawdown East End, which seeks local solutions to reverse global warming, reducing food waste is the organization’s top priority and path forward. Co-founder Mary Morgan emphasized that conscious buying is also part of the process — and using everything you buy.

“I always say, ‘Farm stands first,’” she said. “Buy what’s local, what’s in season. Talk about cutting down your greenhouse gasses and getting more nutrition and better health.”

The act of separating food scraps to compost can raise awareness of how much really does go to waste. In her home, Morgan practices what she calls “wabi-sabi” compost — acknowledging that her pile doesn’t have to be perfect, she said — while Haubner uses a container in his backyard.

No matter the method, a good first step for the compost curious is collecting yard waste, Zimmer said.

“For the person who is new to compost, a great way to begin — the gateway to composting, if you will — is to just collect leaves and grass clippings and put them in a pile someplace in the yard,” she said. “It doesn’t have to be in the sun, and then just let it naturally decompose by putting the fall leaves and any grass clippings you might have there.”

Following the brown-to-green ratio means adding more leaves than grass clippings. Other browns, or carbon sources, include paper, coffee filters, napkins, corrugated cardboard, pine needles, twigs and newspaper. Healthy compost shouldn’t have much of an odor. A common mistake is adding too many nitrogen-rich materials, which can produce an unpleasant smell.

Like forming any other good habit, composting involves trial and error, and a fair amount of patience.

“You have to be flexible in terms of composting. You have to find the thing that works best for you and your lifestyle so you can stay with it and get the benefits,” Merkelson said. “Find out what works for you and stick with it. It’s like any habit. It takes about 30 days to become a habit and then it’s just part of your routine. It’s not time consuming, it’s not expensive. And the benefits are important.”

For apartment-dwellers, vermicomposting with worms and bokashi composting, which harnesses fermentation, can both be done indoors.

Joanne Palisi of Eastport has been vermicomposting with red wigglers for years. The worms eat through waste, aerating and enriching soil in the process. They leave behind castings — or manure that’s essentially organic fertilizer — and they’re low-maintenance pets, too, she said.

Palisi has built a worm bin for hers to live in and uses the compost on her garden’s raised beds. In the winter, she brings the worms inside.

“I just start in layers. Each layer has a function,” Palisi said of the bin. “It’s like a hotel. The top layer of the penthouse is their home, where I’ll set that up with cardboard and newspaper … I take dried leaves, lots of dried leaves — they love that — and then I put in some regular dirt.”

Palisi feeds her worms scraps from the kitchen, but avoids citrus — the worms don’t like that, she said — and adds water to keep moisture levels steady.

“Any kind of peelings, that goes right into the bin and, believe it or not, they eat that within a week,” she said. “It’s gone. It’s like, oh my gosh, you ate all that already?”

Another wormy option is the “worm buffet,” an in-ground worm farm for raised beds that can be made from a plastic pitcher. Palisi’s setup produces worm tea, a liquid fertilizer that can be spread on gardens. She distills one cup of the concoction with a gallon of water and gifts it to friends, she said.

“I pass it on because it’s like a miracle,” she said.

For the squeamish or worm adverse, bokashi may be the way to go. This method ferments organic material, rather than fully decomposing it, in an anaerobic process. It’s much quicker than other methods and uses an inoculant mixture — usually wheat germ or a similar ingredient combined with microorganisms. Essentially “precompost,” it can be added onto an existing compost pile and actually helps meat products break down.

Merkelson, who uses the bokashi method in his own home, collects food scraps in a bucket under his counter and brings it down daily to the basement, where he has a 5-gallon bucket. He adds some bokashi bran and keeps the bucket sealed. Two weeks later, it can be buried in the garden or added to his other compost.

“After another two weeks, it makes the soil in that area very rich,” he said. “You can mix it with soil and create a potting soil type of mix, or a planting mix. I got into that because I didn’t like going out in the winter or in the rain to my compost pile.”

Some municipalities have tried to make it easier for residents to compost. From food-scrap collection to larger community composts, these efforts promote sustainability at the local level.

Merkelson, who is also a member of Transition Town Port Washington, which works toward sustainability and climate resilience, spoke of efforts in his area. There are three community composts in Port Washington — one at a community garden, another as a three-bin setup at a science museum and the last at the Thomas Dodge Homestead. The latter encourages households to use the bokashi method, and the material is picked up and used at the compost pile.

Grounds For A Peel in Centereach is one of many composting businesses that have sprouted up recently. The service collects food waste from households and then composts it, according to owner and founder Glenda Alvarado-Ostrow.

“Some people just don’t want to deal with doing the work themselves. Others live in a residence where they’re renting,” she said. “[They like] the ease of giving the compost to somebody else so they don’t have to take care of it.”

On the East End, there are not many community composting sites, but the Ecological Culture Institute does have a program in Hampton Bays. Drawdown East End worked with the Town of Southold on a project that diverted food waste from 30 homes for 30 days, which totaled over 1,000 pounds of waste, Haubner said, and noted that a group of homeowners in Calverton is working on a backyard composting effort.

Even on an individual level, composting is a simple practice anyone can do for the climate. Once the setup is in place, it only takes a few minutes a day — like brushing your teeth.

“Find something that works and do it because it’s important for the planet and for our communities,” Merkelson said.

Well, this was supposed to be a column about challenges met, bee colonies saved, blah ... 26 Jul 2022 by Lisa Daffy