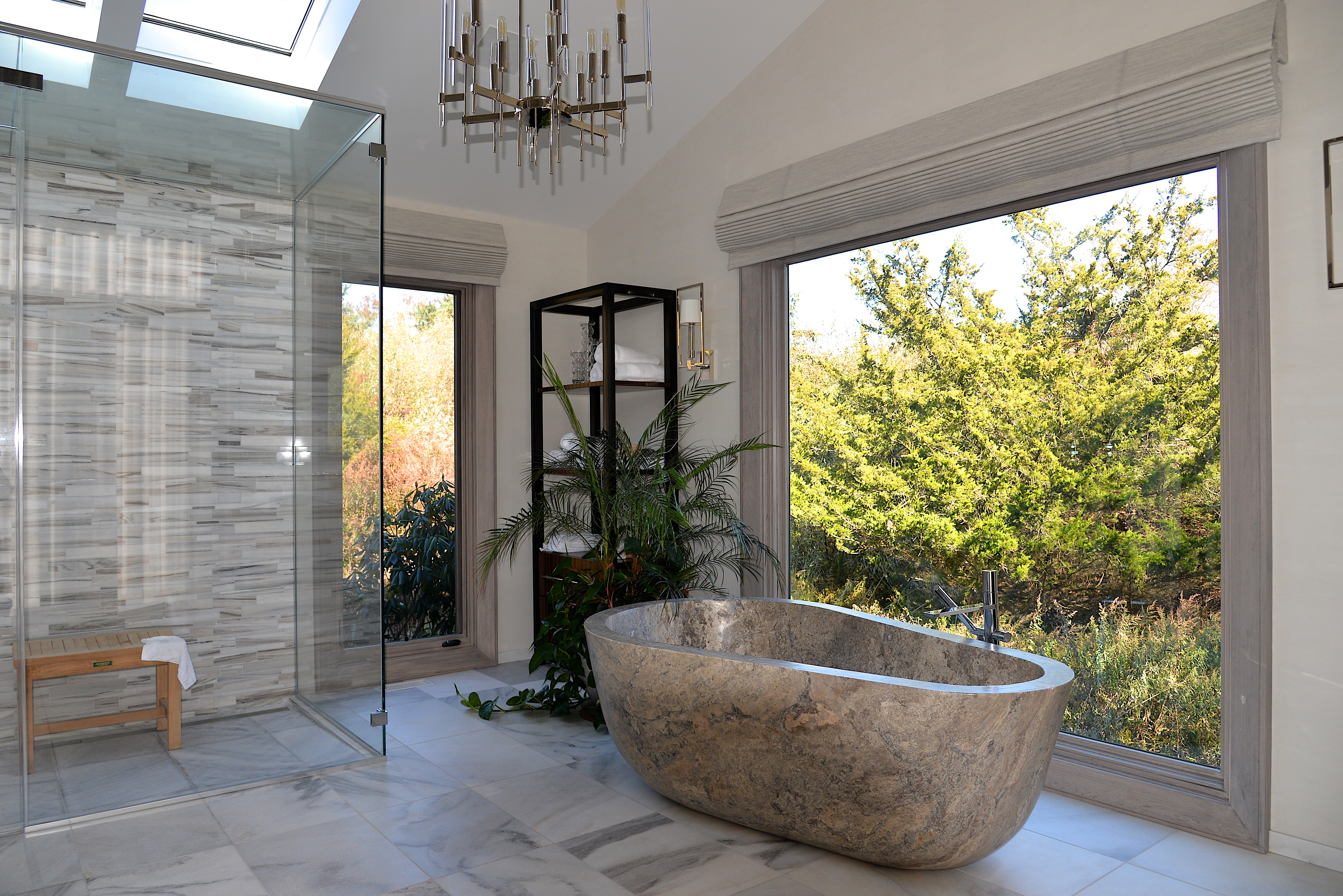 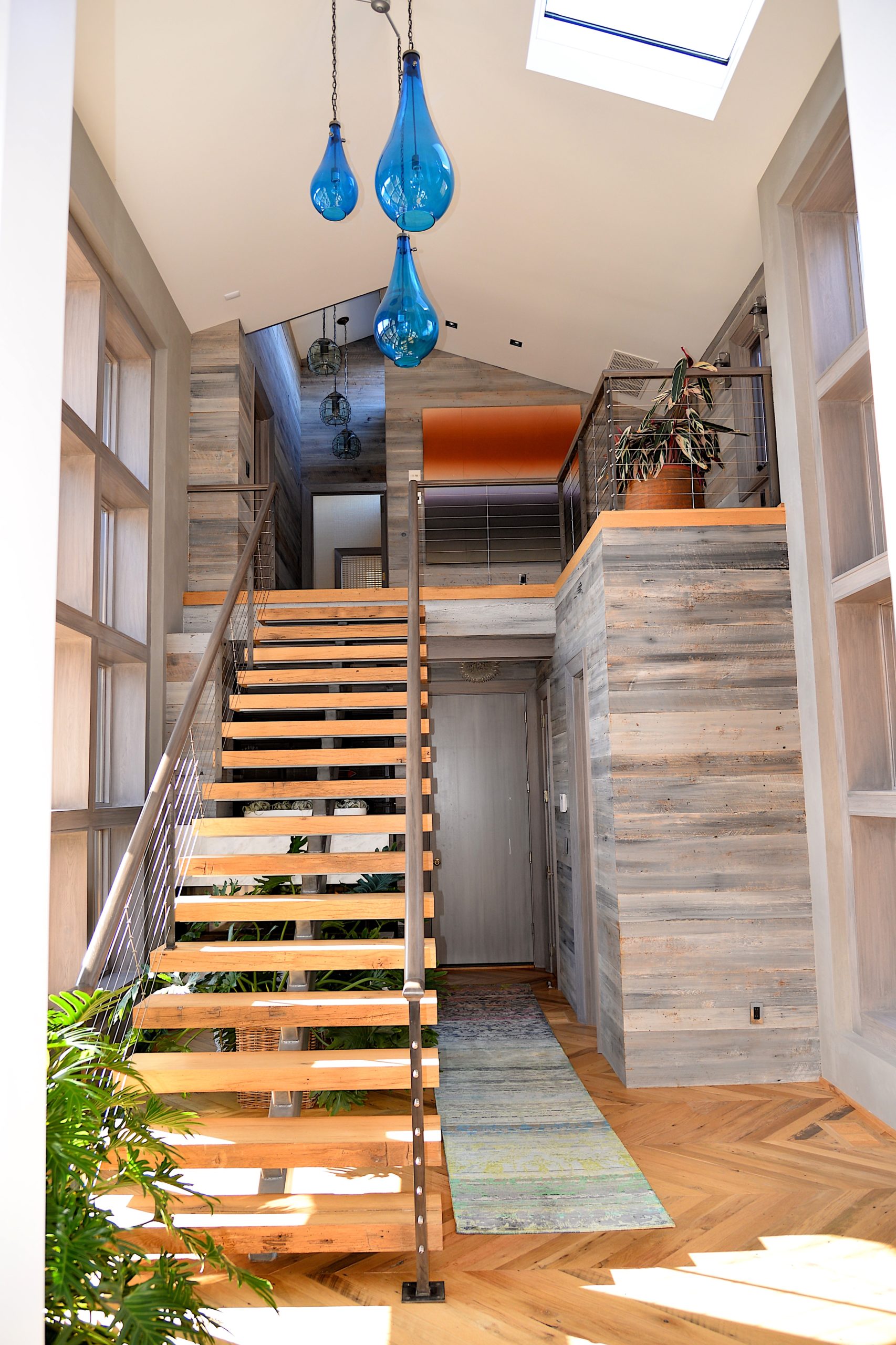 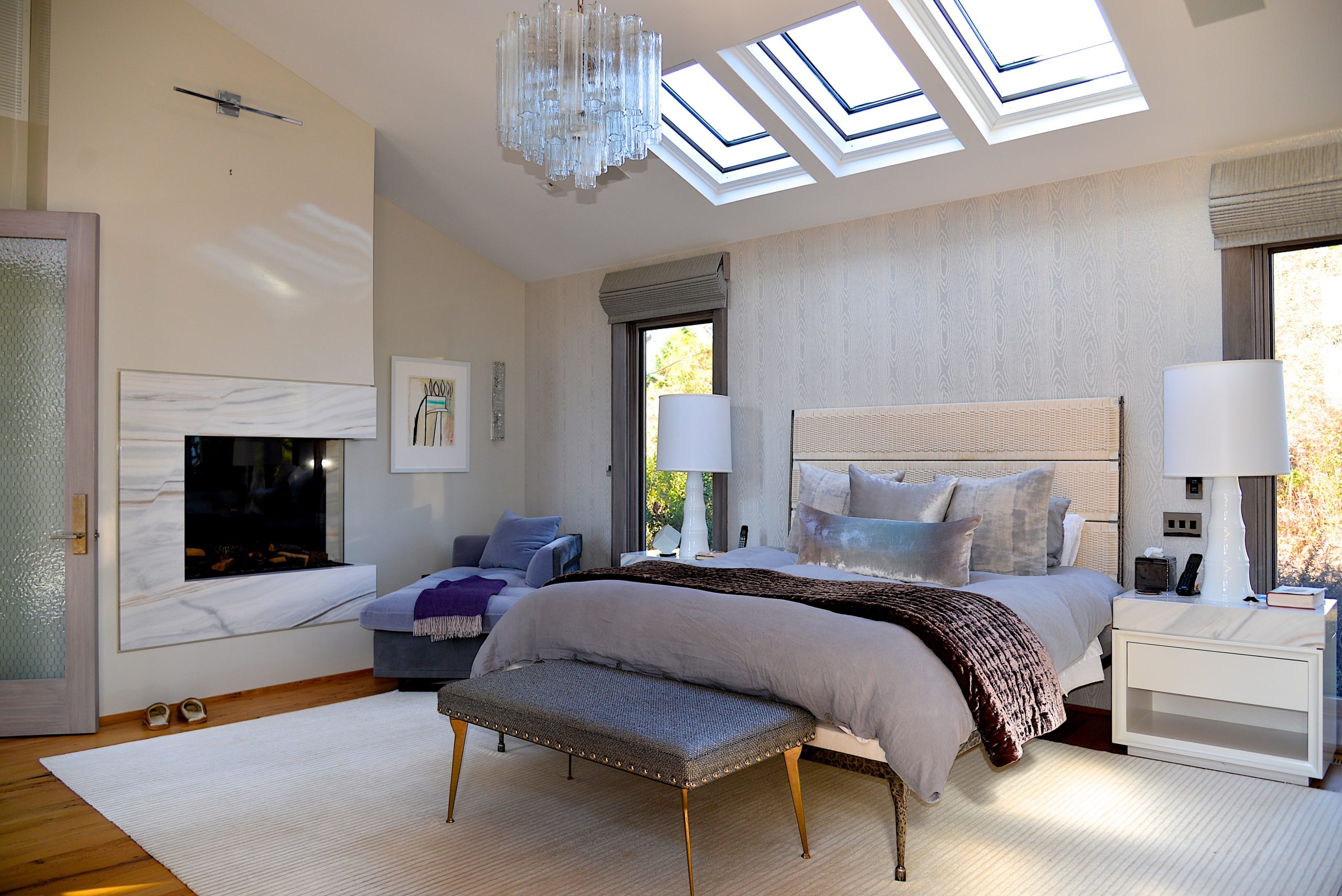 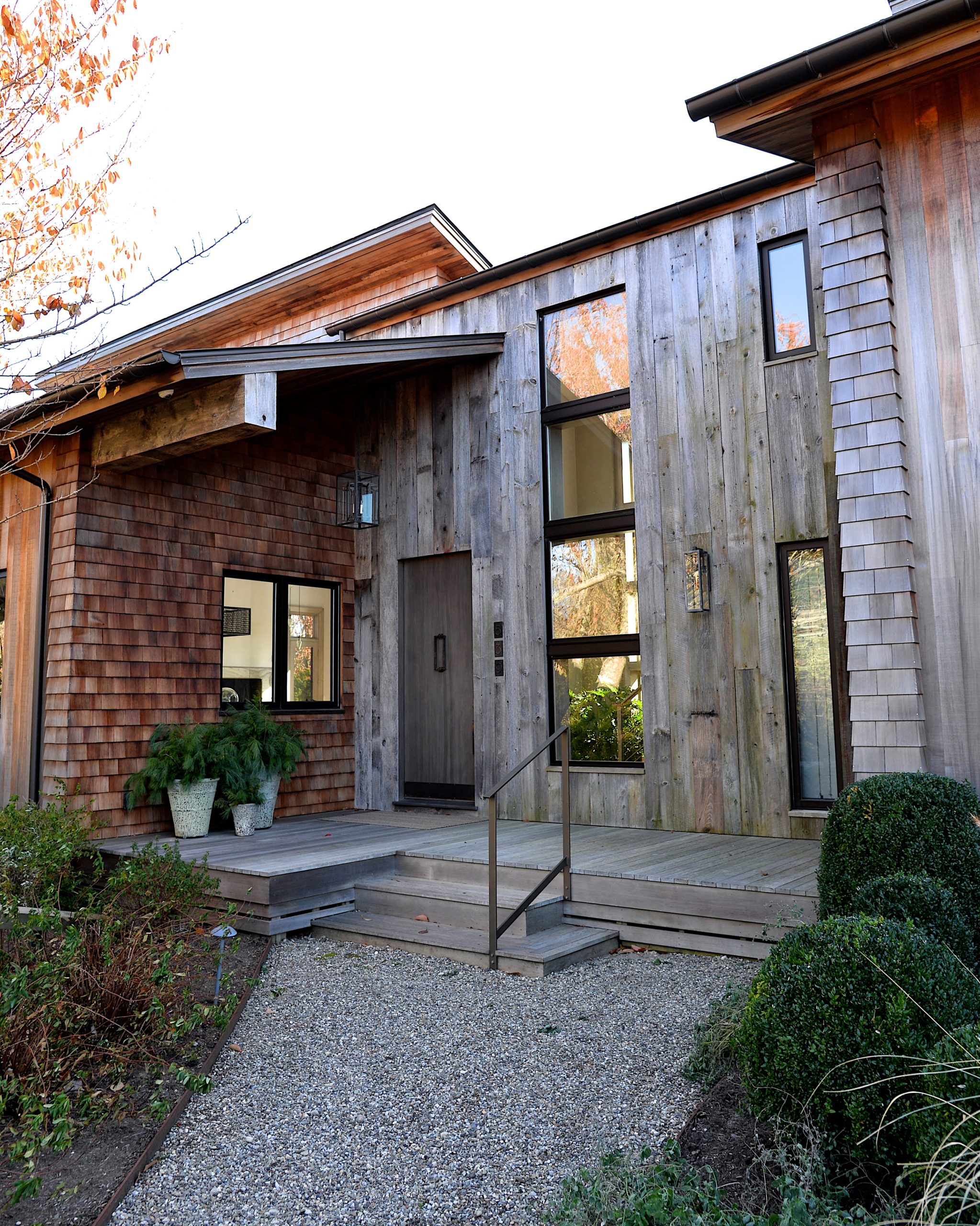 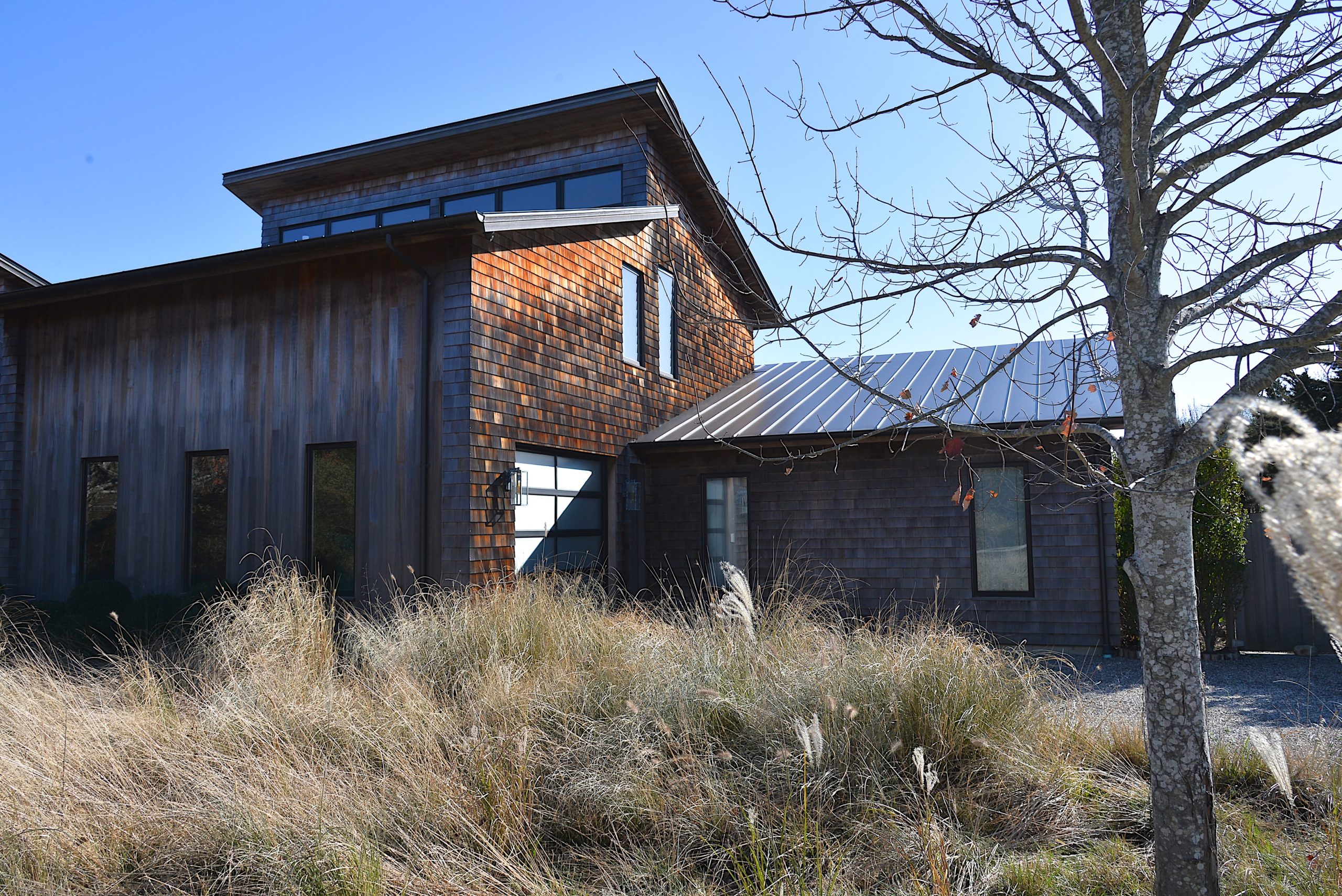 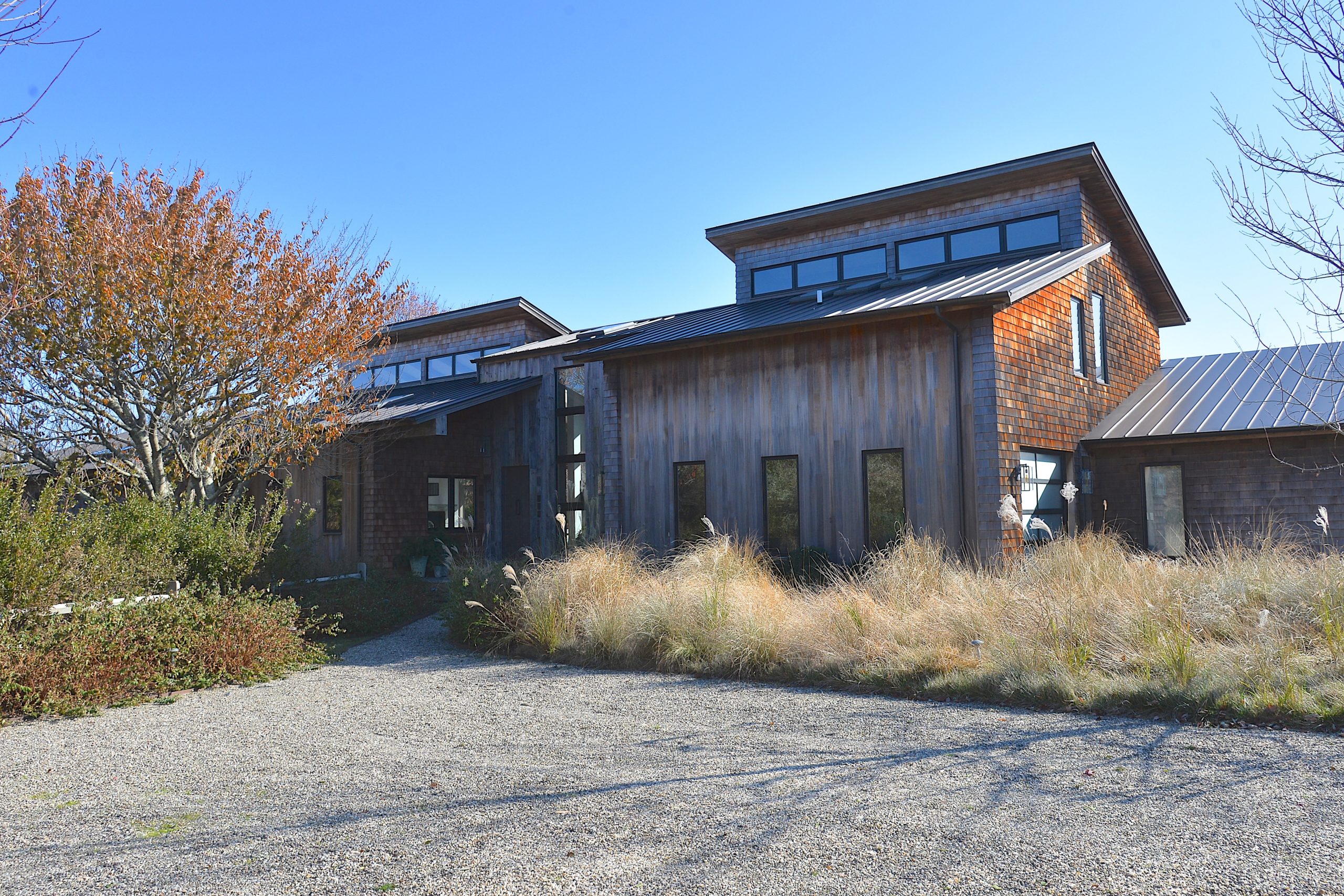 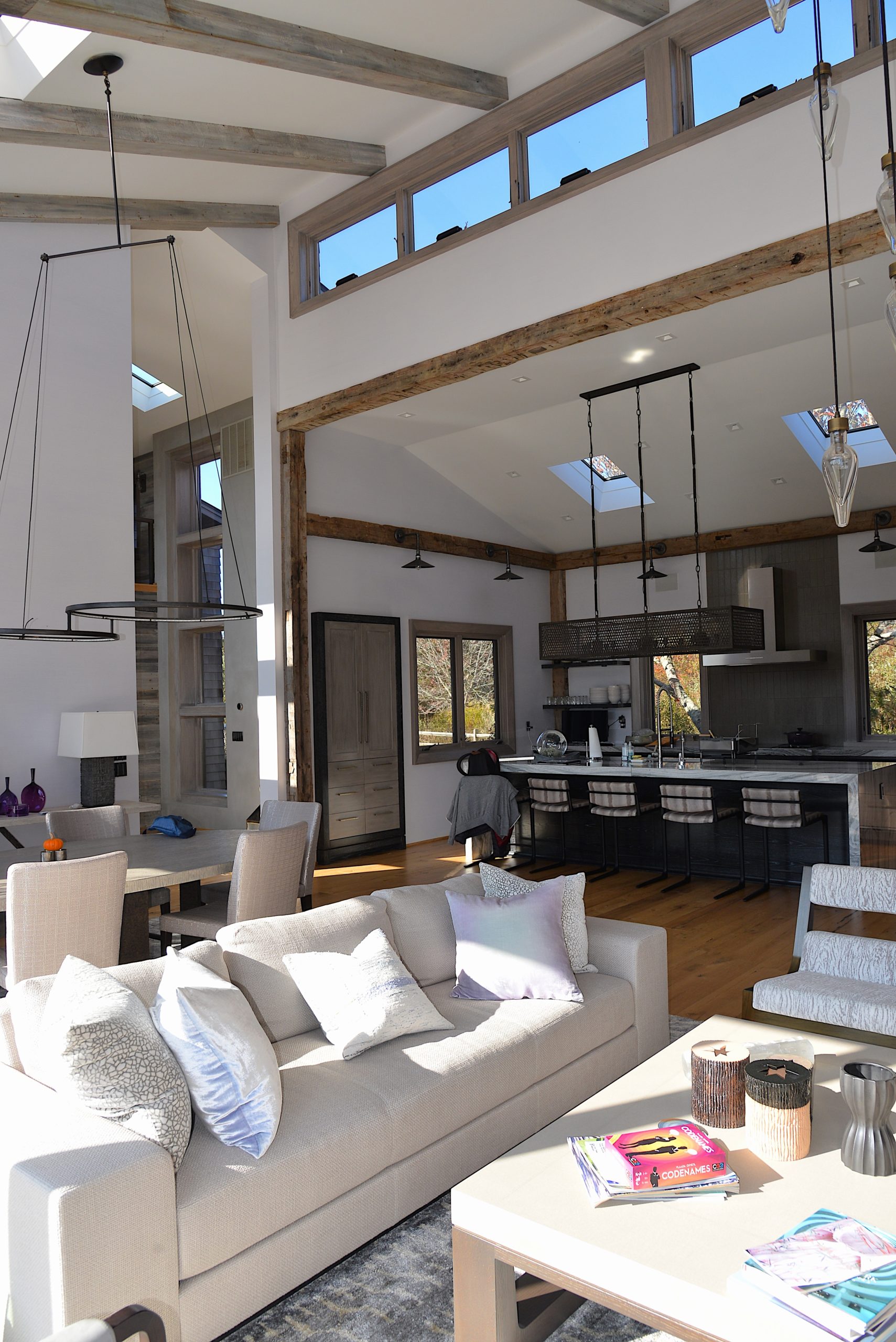 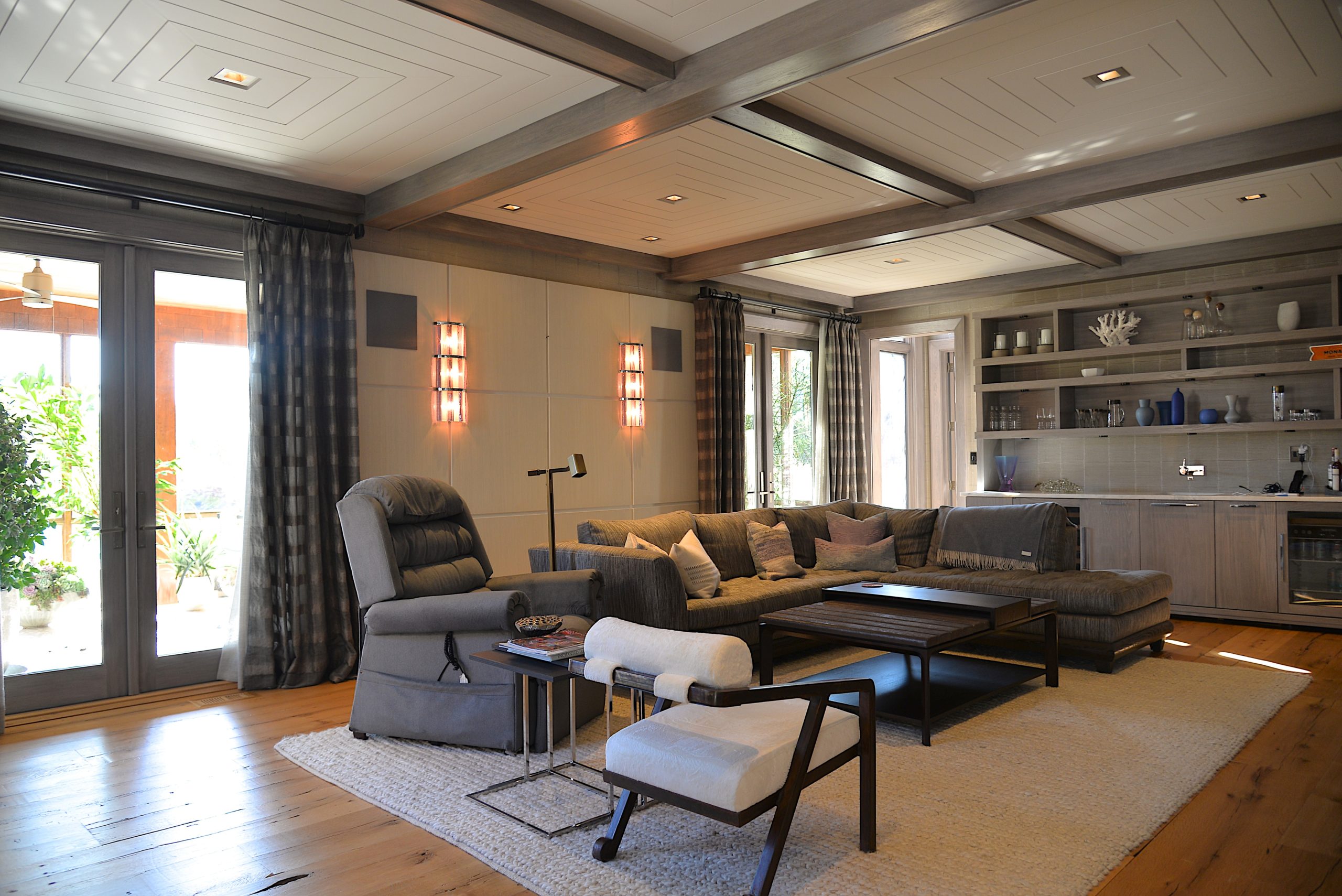 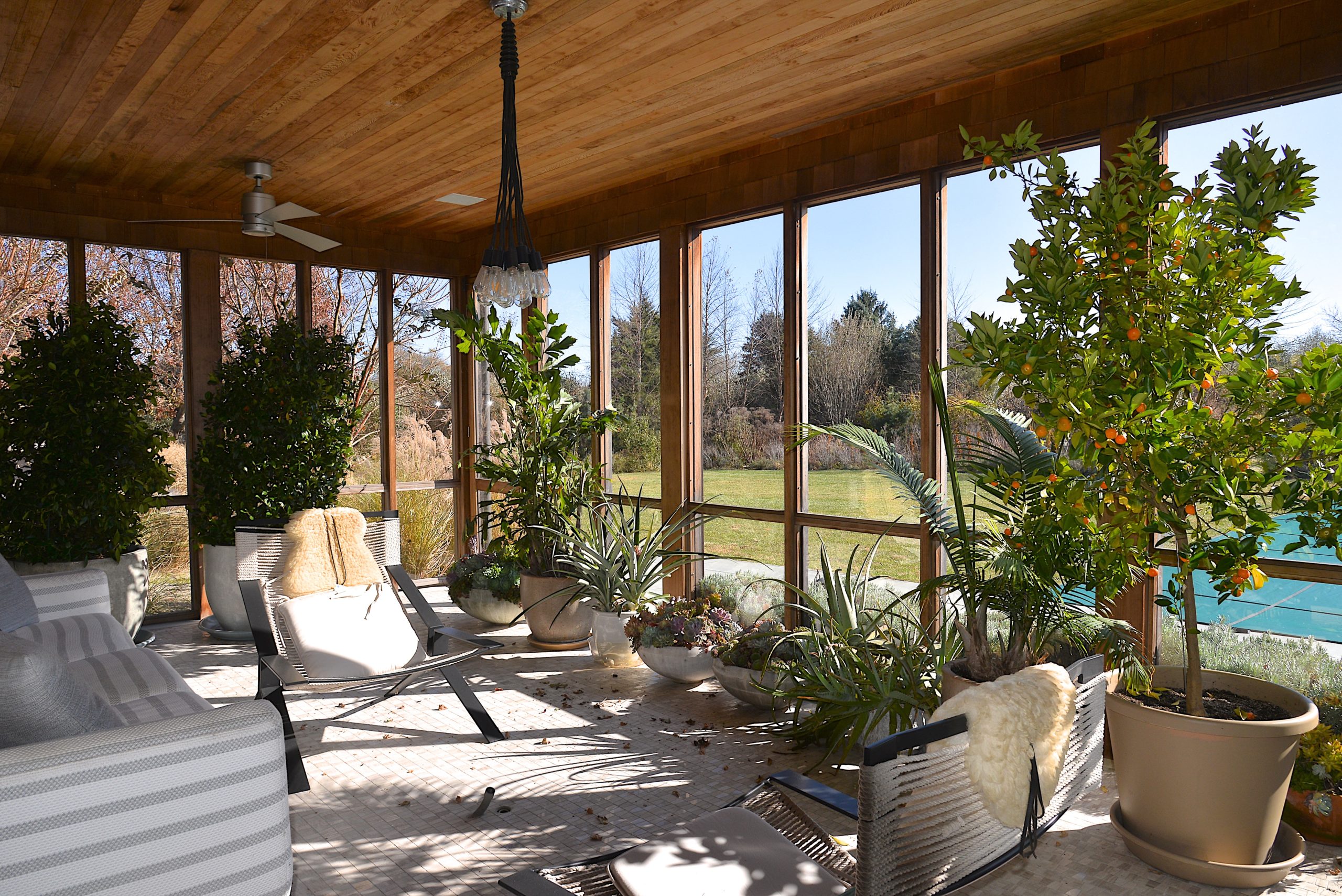 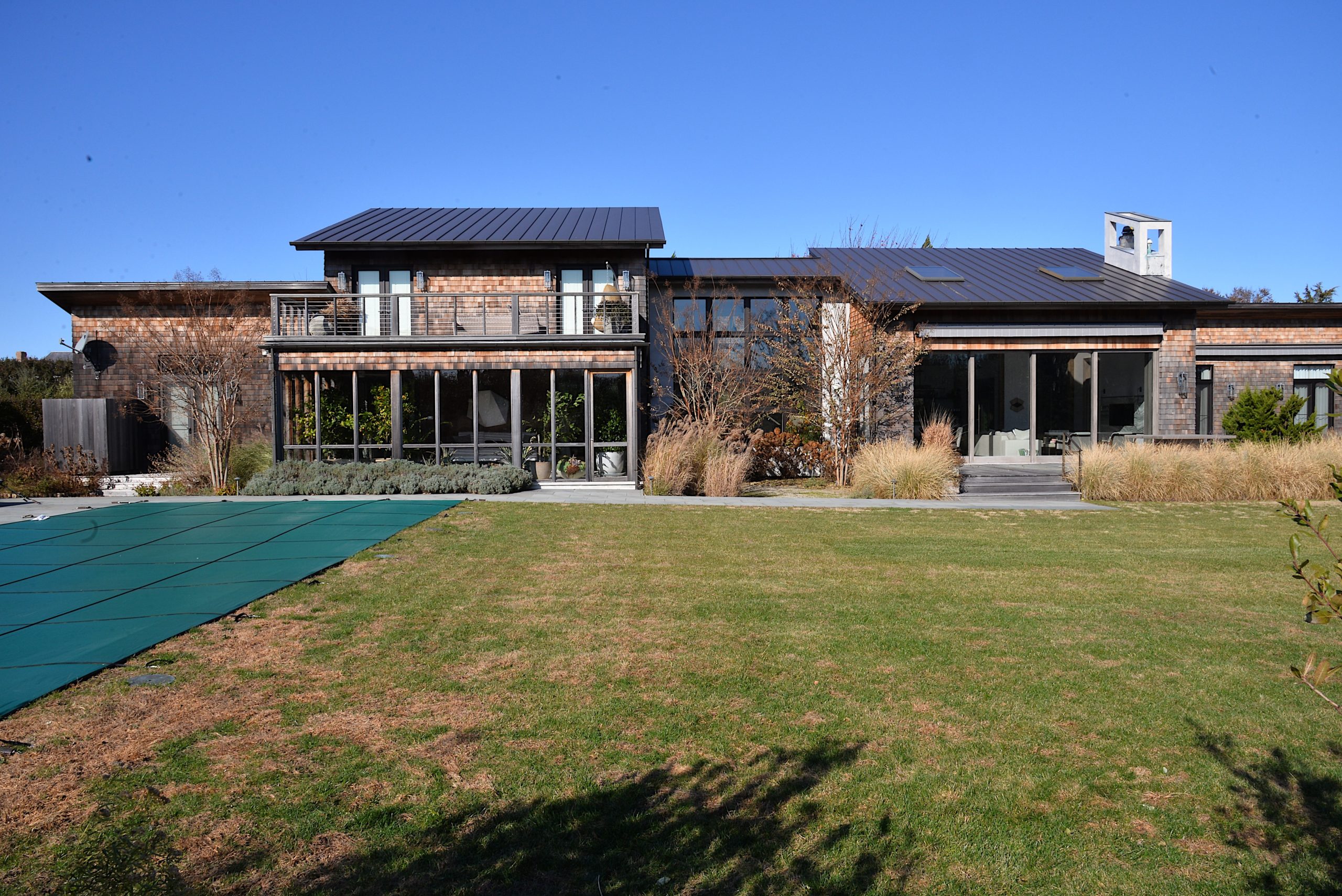 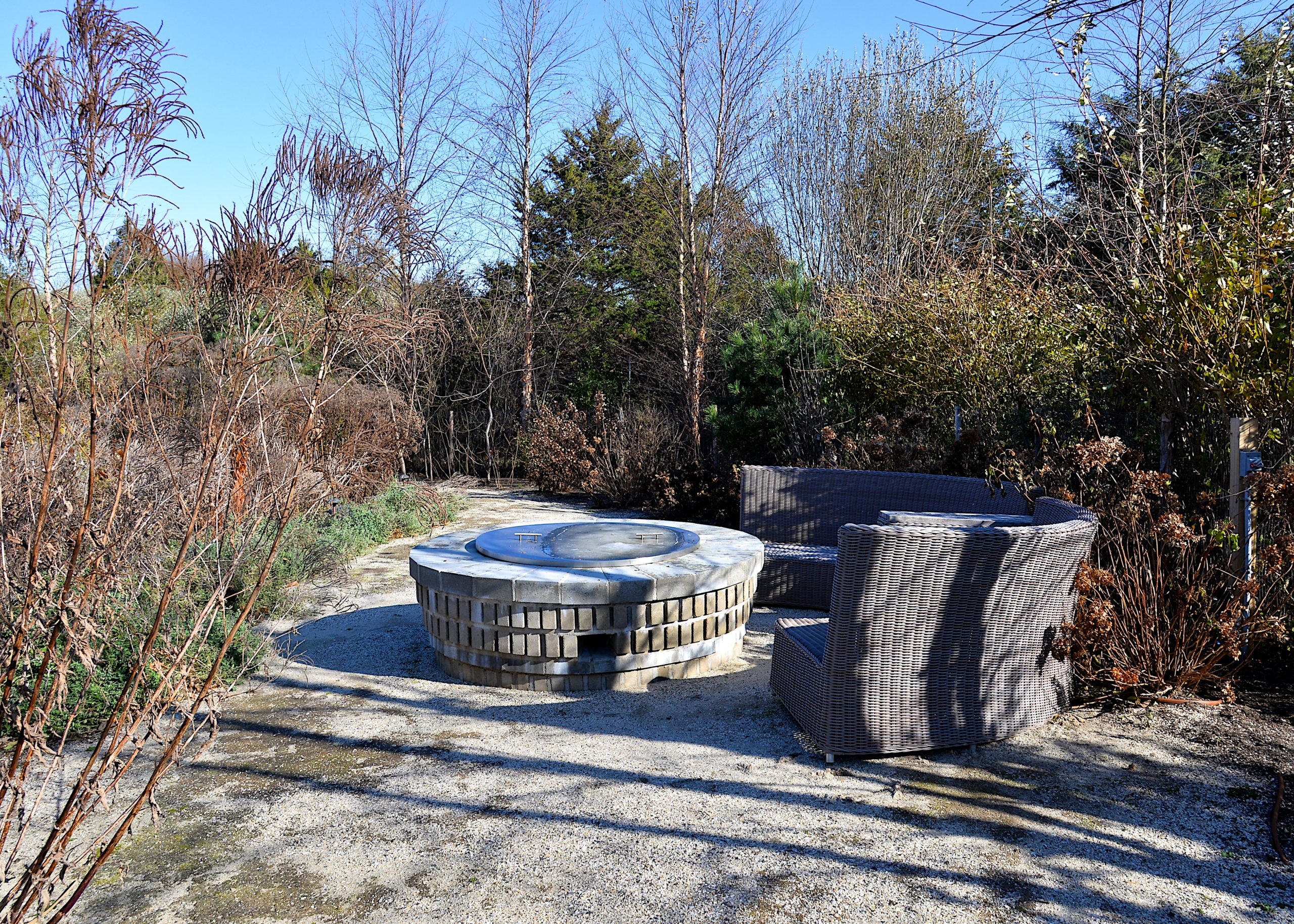 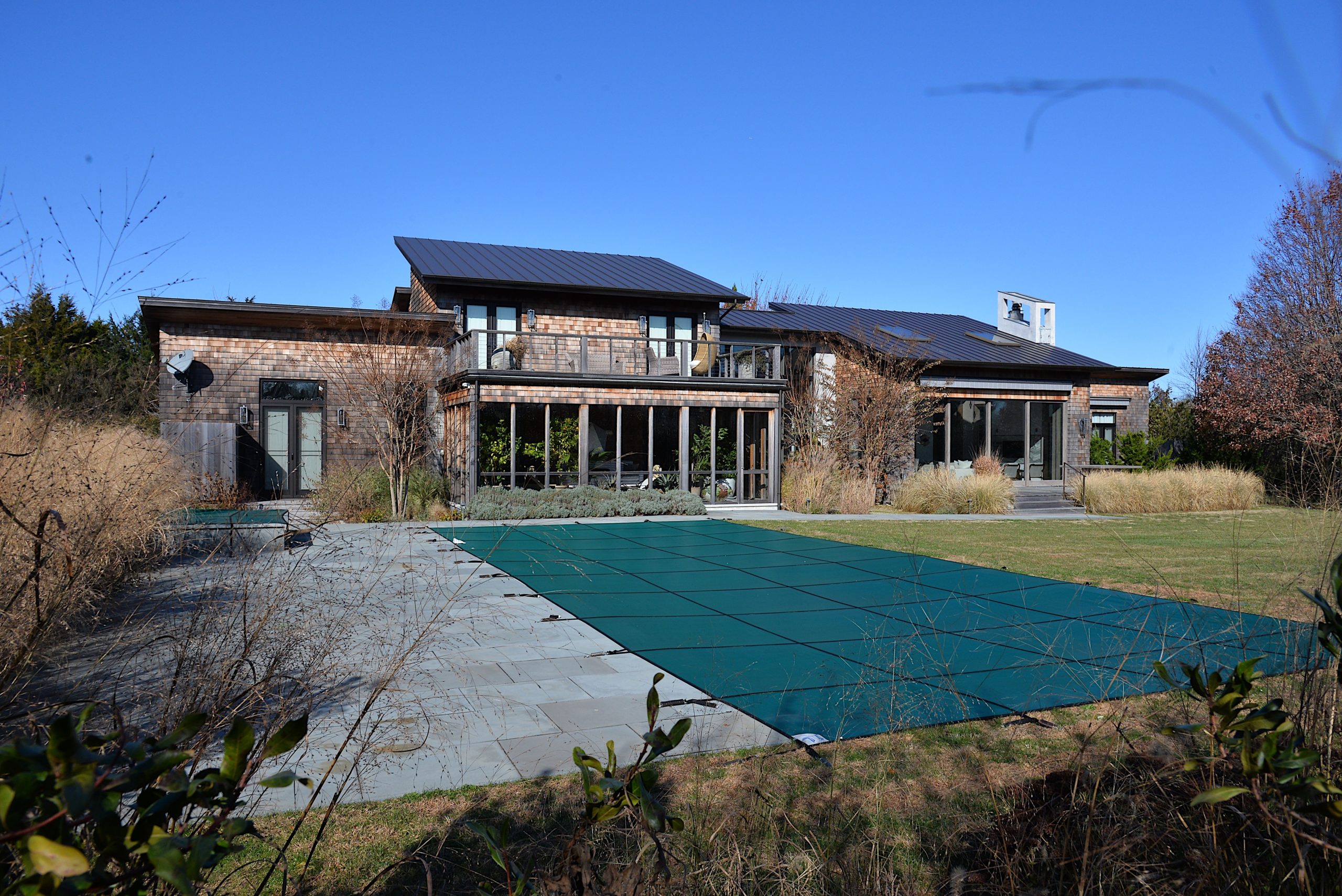 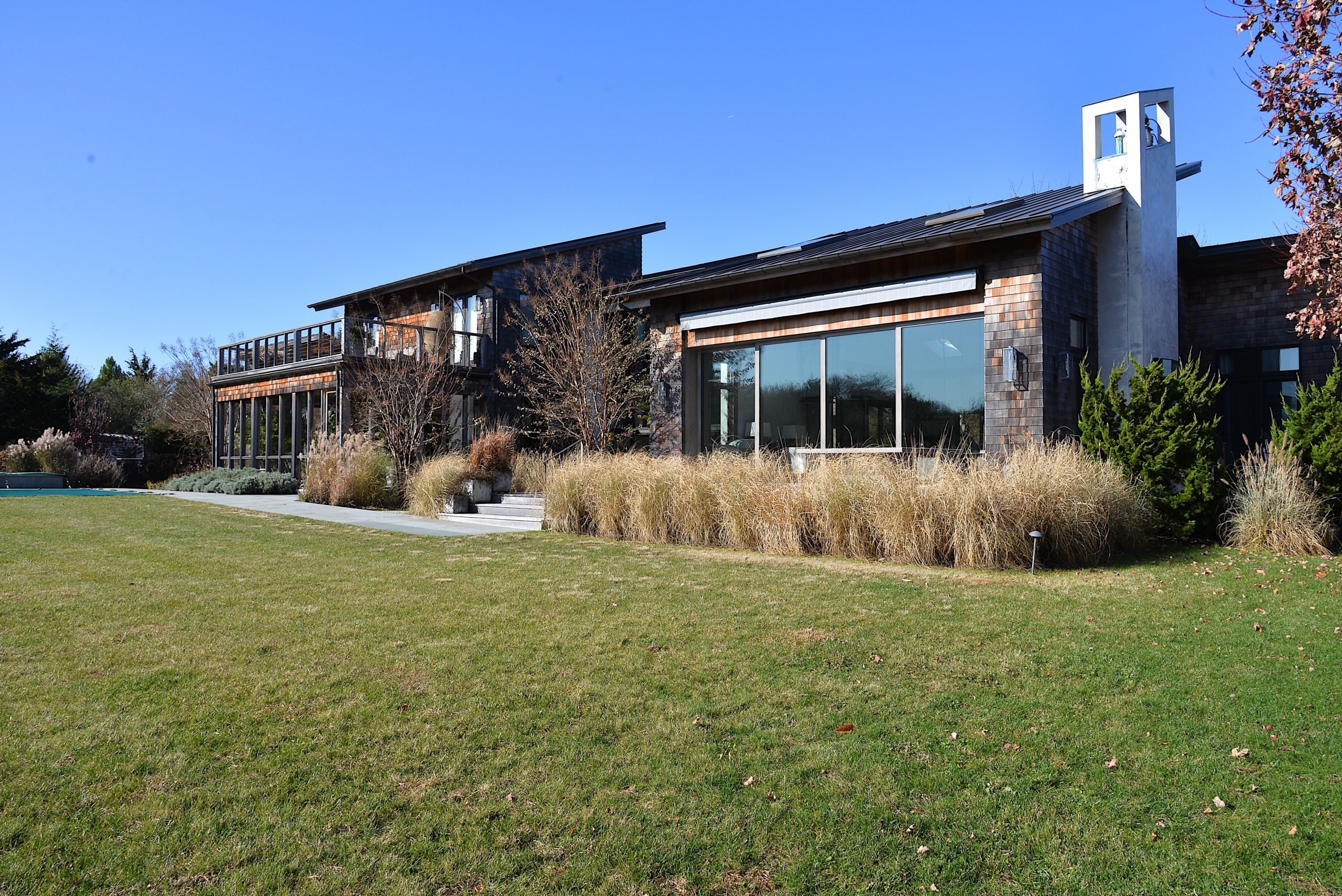 Dan Michels worked for landscape designer Edwina von Gal from 2012 to 2014. During that time she went away and asked him to pick up her Amber Waves CSA. “Sure,” he said. “Whatever that is.”

He shrugged his shoulders. “My brother was getting a lot of fish that summer, and we just …” He threw his hands in the air.

No words are needed to describe the feasts. It doesn’t get any better than produce pulled from the earth and fish fresh from the sea on the same day. It’s the universal language of love.

“I’m going to do this next year,” he said of his newfound appreciation for local farming.

True to his word, he joined the community supported agriculture and started picking up his own weekly basket of goodies at Amber Waves Farm in Amagansett. In time, he got much more than radishes, carrots and kale.

The architect is standing in the stairwell of a 3,700-square-foot Bridgehampton home he designed for a client. He also designed the surrounding acre of gardens.

Double story windows give way to the dramatic staircase, milled from old barn wood beams found in Virginia. The same white oak is used on the floors and trimmings throughout the house. The light, even on a dark November day, seems transcendent, coming from all directions.

Mr. Michels built the home with cross ventilation in mind. “So the house breathes very well in the summertime,” he said.

The home is passively heated and cooled. The roof has a solar hot water system that heats the pool, domestic hot water and radiant heat sources such as the tile floor in the sunroom. “I feel this place is pretty luxurious,” he said. “You have to take a different approach when designing that way and bring it in very early. You can’t tack it on.”

The kitchen and dining room open to the outdoor patio, flanked by two master bedrooms on the first floor. The pièce de résistance inside the master bedroom (as opposed to the junior master) is a 3-inch-thick marble pear-shaped tub. One barely notices the walk-in closet between bedroom and bathroom.

“The painter was here a long time,” Mr. Michels said of the white lacquered closet doors. The wood was probably coated with 10 to 12 coats of paint to create the right amount of sheen.

Textures are woven throughout the entire home, from the exterior mix of traditional shingles, clapboards and metal roofing to the raised paneling and metallic crosshatch wallpaper with silver seams in the sophisticated lounge to chicken wire set into the glass door panels of the guest bathrooms on the second floor.

Mr. Michels worked well with interior decorator Jolie Korek to create an easy palette in shades of gray, with touches of brown and lavender.

Mr. Michels, the eldest of three brothers, grew up in Springs, went to Springs School and East Hampton High. His father was a master chief petty officer in the Coast Guard and currently serves as chief harbormaster in East Hampton.

“My mom had her hands full,” he said taking a seat in the sunroom off the lounge. “She had three boys.”

Growing up, he painted houses and worked in carpentry. He studied construction technology and drafting at Suffolk Community College in Selden and upon graduating he worked for three architectural firms over seven years.

“I decided to go back to get my Bachelor of Architecture,” he said. “And go through proper training at the New York Institute of Technology.”

He studied abroad in Venice and Bologna, Italy, and presented his thesis in Istanbul, Turkey.

“I studied modern architecture. All of my professors were very into international style, post-World War ll,” he said. “Mies van der Rohe, Le Corbusier were creating a whole new way to build when rebuilding Europe.”

Mr. Michels's favorite building of all time is the Hagia Sophia, built in the Middle Ages in Istanbul, but his greatest inspiration comes from the 1970s shingle style he grew up with here on the East End.

He worked for several local architects before opening his own practice and recently moved his office from East Hampton Village to South Erie Avenue in Montauk, for a little change of scenery.

“I’m very hands on,” he said. “I’m on my projects every day.” The Bridgehampton client was his first big project from start to finish, and he’s grateful to the homeowner for giving him the opportunity.

He has Ms. von Gal to thank for giving him the cutting edge in a competitive field. “I learned from everyone but working for Edwina had the biggest impact on me,” he said.

She helped him to bring landscaping into his business model. “Not a lot of architects know plants, and not a lot of plant people know architecture,” he said.

Ms. von Gal uses predominantly native plants in her gardens, and the architect took the low maintenance, eco-friendly design elements with him. The garden surrounding the Bridgehampton house has low water needs and helps to provide a good ecosystem for birds and wildlife. “Even though the garden is dormant now, there’s a lot going on here,” he said. “Plenty of seed pods for the birds and insects.”

Although his client loves plants, Mr. Michels has been pushing the native flora hard since the beginning of the project, four years ago. “He’s a great client and lets creative people be creative,” Mr. Michels said.

Mr. Michels worked with landscaper Robert John and Associates out of Bridgehampton to create a peaceful oasis that includes a vegetable and herb garden planted in half wine barrels to prevent the resident rabbits from taking too much of a share. Large-leafed parsley is still going strong even after the previous night’s frost.

He started simply in the first phase of the garden, planting native bayberries and grasses, and added as the client lived on the property. They didn’t touch the milkweed, which reseeds every year and has formed a lovely, large patch that monarchs love.

Black pine, sumac, lilac, elderberry, and bluestem grasses add variety and texture to the garden, with pops of color from red berries and white seed puffs of native wildflowers.

There’s a fire pit and a surprisingly elegant hot tub made from cement blocks, cut and formed into a modern design reminiscent of art deco. “I mixed it for a lot of texture,” he said. “I can’t wait for it to get mossy.”

In front of the house, a patch of tall grasses breaks up the driveway and garbage cans are buried in the ground near the garage to keep animals at bay and the view clean.

Mr. Michels travels to the city for classes at the Brooklyn Botanic Garden, where he will eventually earn a horticulture certificate. “That place is beautiful,” he said. “The plants are awesome.”

As his love and knowledge of plants continue to grow, so does his family. He lives in Amagansett with his wife, farmer and co-founder of Amber Waves Farm Katie Baldwin, and their 2-year-old daughter Beatrice, who sometimes accompanies him to work.

Even though the novel coronavirus, COVID-19, has spread at an unbridled pace, and the public knows all about social distancing and 20-second hand-washing, there are still other measures to consider for decreasing the potential for transmission in both residential and commercial building environments. In recent years, there has been a vast amount of research done regarding the existence and transmission of microbes, both in terms of pathways and mechanisms. There is evidence that a virus can spread by “environmentally mediated transmission,” which is essentially related to contact with abiotic — physical rather than biological — surfaces. Most of us spend ... 1 Apr 2020 by Anne Surchin, R.A.