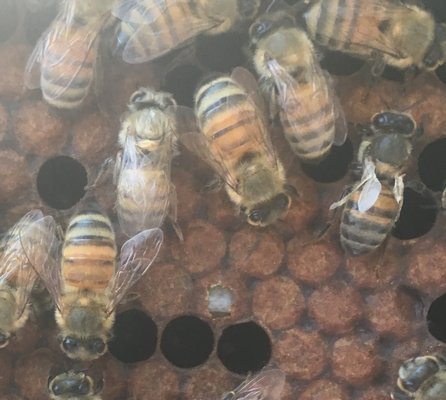 “I’ve got 60,000 of those bees and every single one of them  is nothing but trouble.” —comedian and beekeeper  Russell Brand

I feel his pain. This year, I was sure we were going to get honey, at least from one hive. We got off to a bad start in the spring, with one of our two hives dying. Then we had to split that one hive into three hives because I had ordered two queens from Iowa, and they were already en route when I realized we were down a hive.So resources were stretched pretty thin, but still, I thought we were doing pretty well. All three hives were going flat out trying to fill up the ranks and the honey stores. By the end of July we had three great queens laying eggs like crazy, piles of bees in each hive, honey was being stored, everybody was happy. It looked like I was finally going to be able to hold my head high among my fellow beekeepers and not have to buy someone else’s honey.

But then, beekeepers make plans and God laughs. By early September, the cupboards were largely bare—and I was hearing the same thing from other local beekeepers. Rachel, who has 12 hives, was able to take honey from just one.

The girls had almost no food reserves stored, and there was no way they were going to be able to catch up in the waning weeks of fall. There are just not that many flowers for them to forage on this time of year.

As I resigned myself to brewing up buckets of sugar syrup to get them through the winter, some of the girls at one hive showed symptoms of deformed wing virus, a nasty ailment that tends to crop up in hives weakened by mites. It causes the wings to be shrunken and deformed, making it impossible for the bee to fly. It also causes other birth defects and is, in general, very depressing for me and the bees.

The other hives didn’t show any signs of it, and there didn’t seem to be a heavy mite load, but the prudent course seemed to be to treat all three hives for mites. That might sound like a no-brainer, but you would be surprised.

There are rabid arguments both for and against treating, and, as with politics, almost nobody is neutral. The treatment-free camp takes the position that not treating promotes survival of the fittest; that it’s the only way to eventually strengthen honeybee stocks so they can survive despite the persistence of these pests.

The pro-treatment side is maybe a little less idealistic—bees are expensive, and going treatment-free routinely leads to colony losses in the area of 40 percent each year.

But treating bees for mites basically means you’re using an insecticide to kill insects that live on insects. So killing the mites while leaving the bees unscathed is tricky. Also, it’s recommended that you treat when the hive has plenty of food stored, as the treatment can disrupt foraging.

That didn’t seem to be an option. Other beekeepers told me that if I was seeing deformed wing virus, it might already be too late to save the hive.

I began to rethink the wisdom of this whole beekeeping thing. Maybe I should collect troll dolls or take up knitting instead. Or just set fire to a big pile of money.

But too late to back out now, and besides, my girls were counting on me. I was afraid waiting would be fatal, so I went ahead and treated the hives despite their lack of provisions.

I got lucky. All three hives survived the treatment—despite a small pile of dead bees outside of each the day after—and my hovering with worry that I had killed all three queens.

So now I’m buying sugar in 25-pound bags from Costco and brewing up giant pots of syrup to pour into feeders in each hive. The girls seem delighted with the free grub, and with luck, it will be enough to get them through the winter so we can start all over next year, positive attitude and optimistic outlook intact.

Because, next year, I really am going to get some honey from these bees.