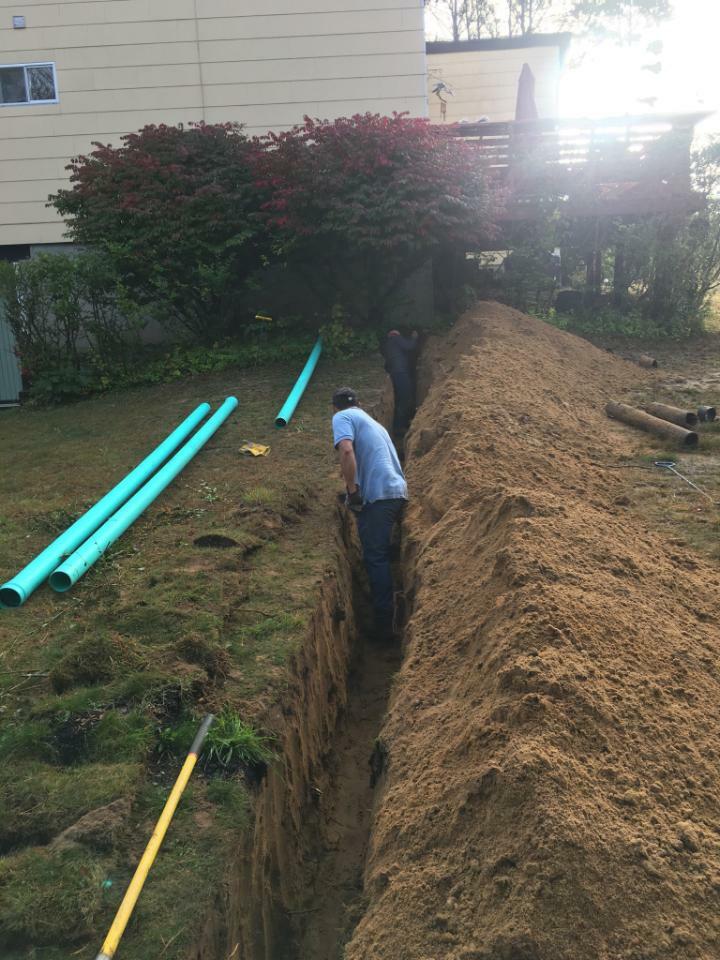 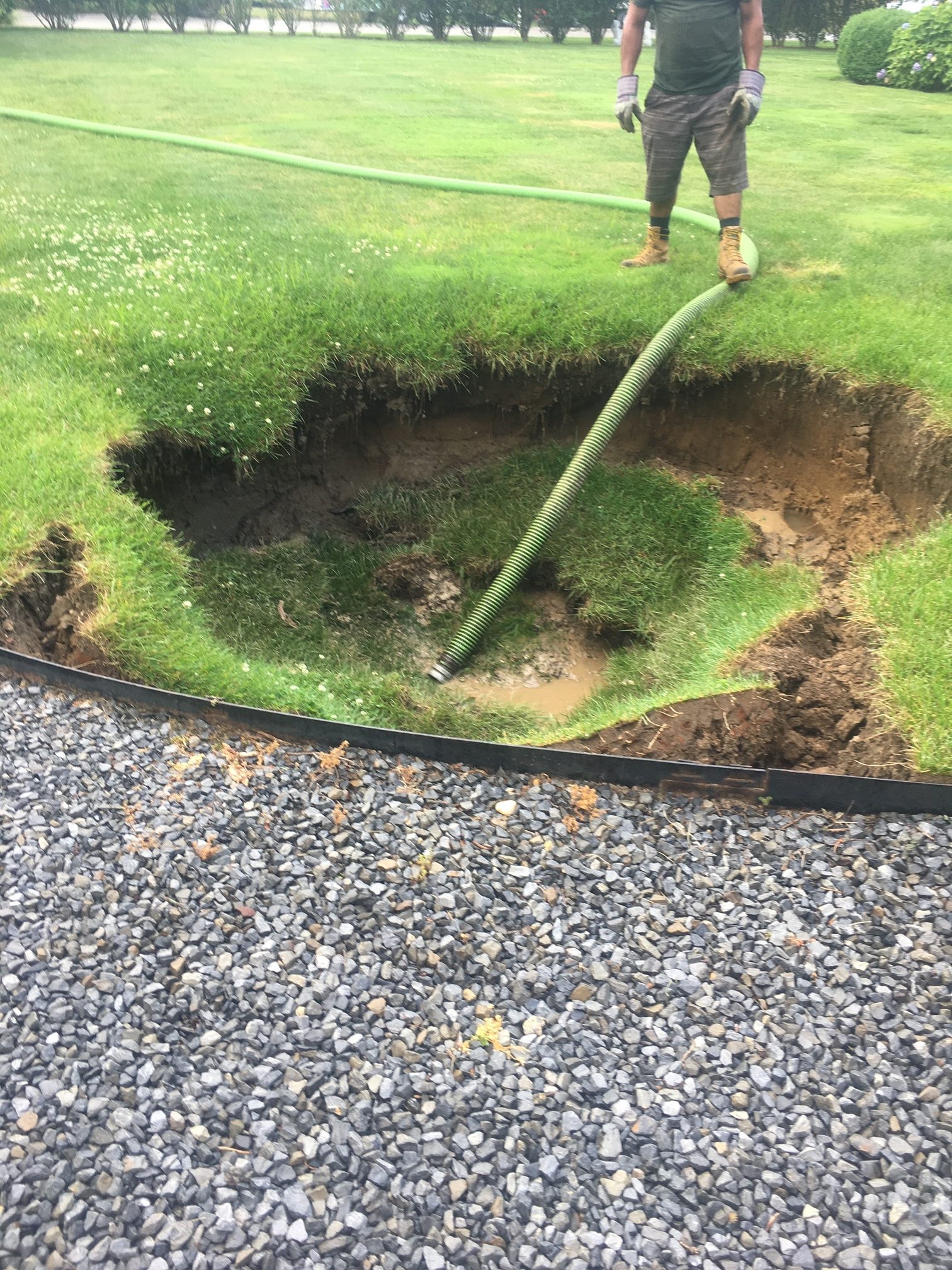 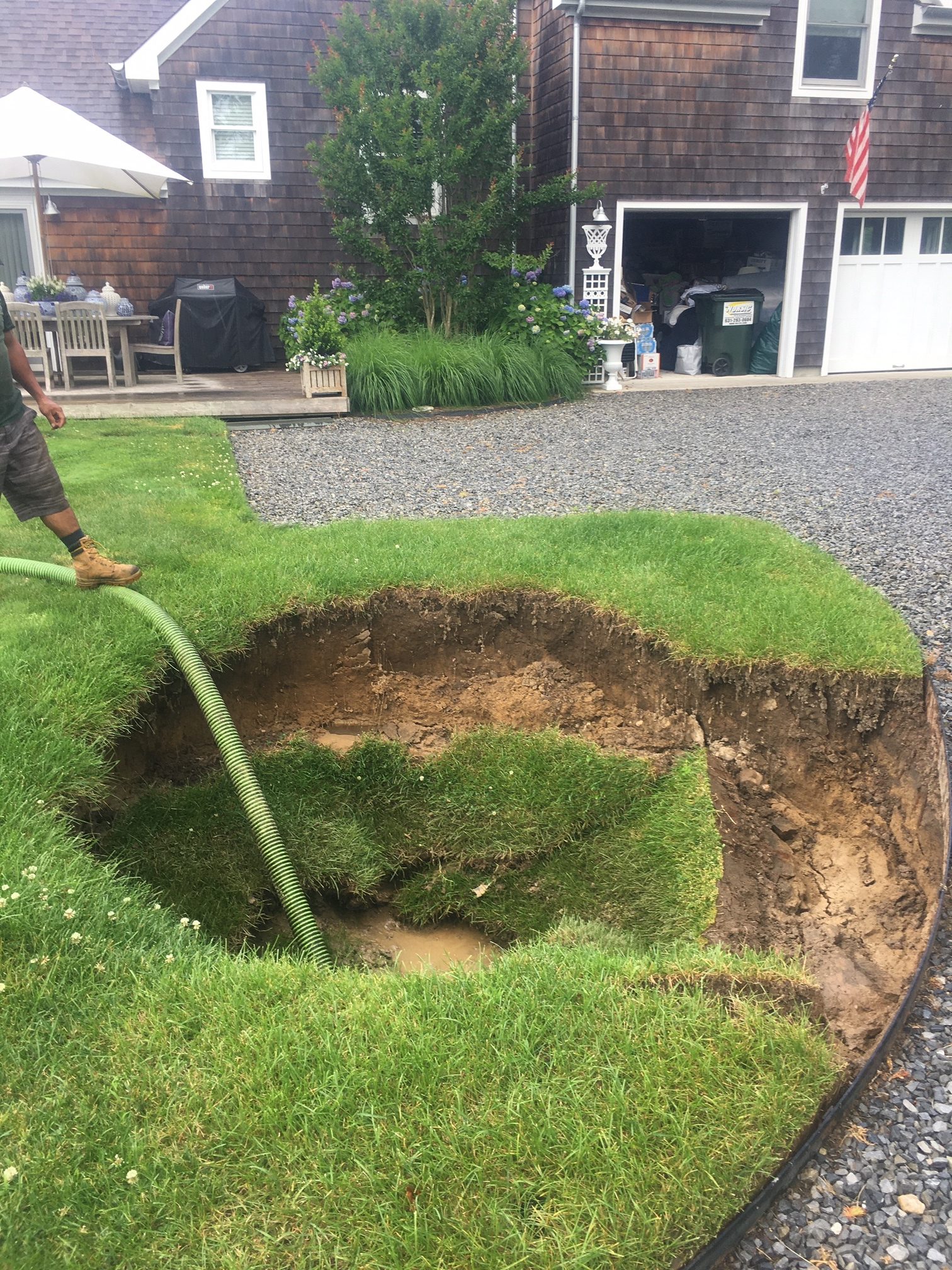 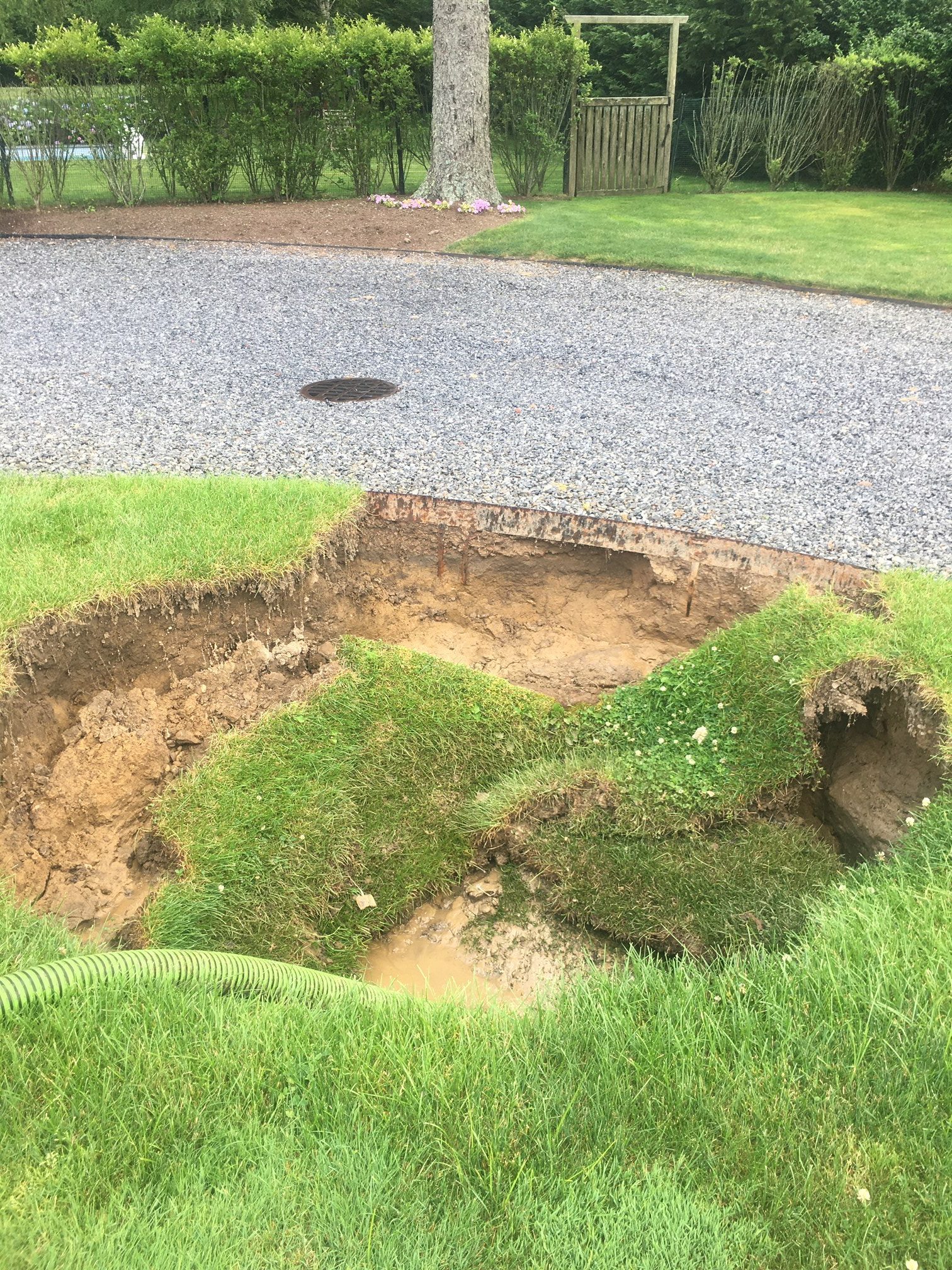 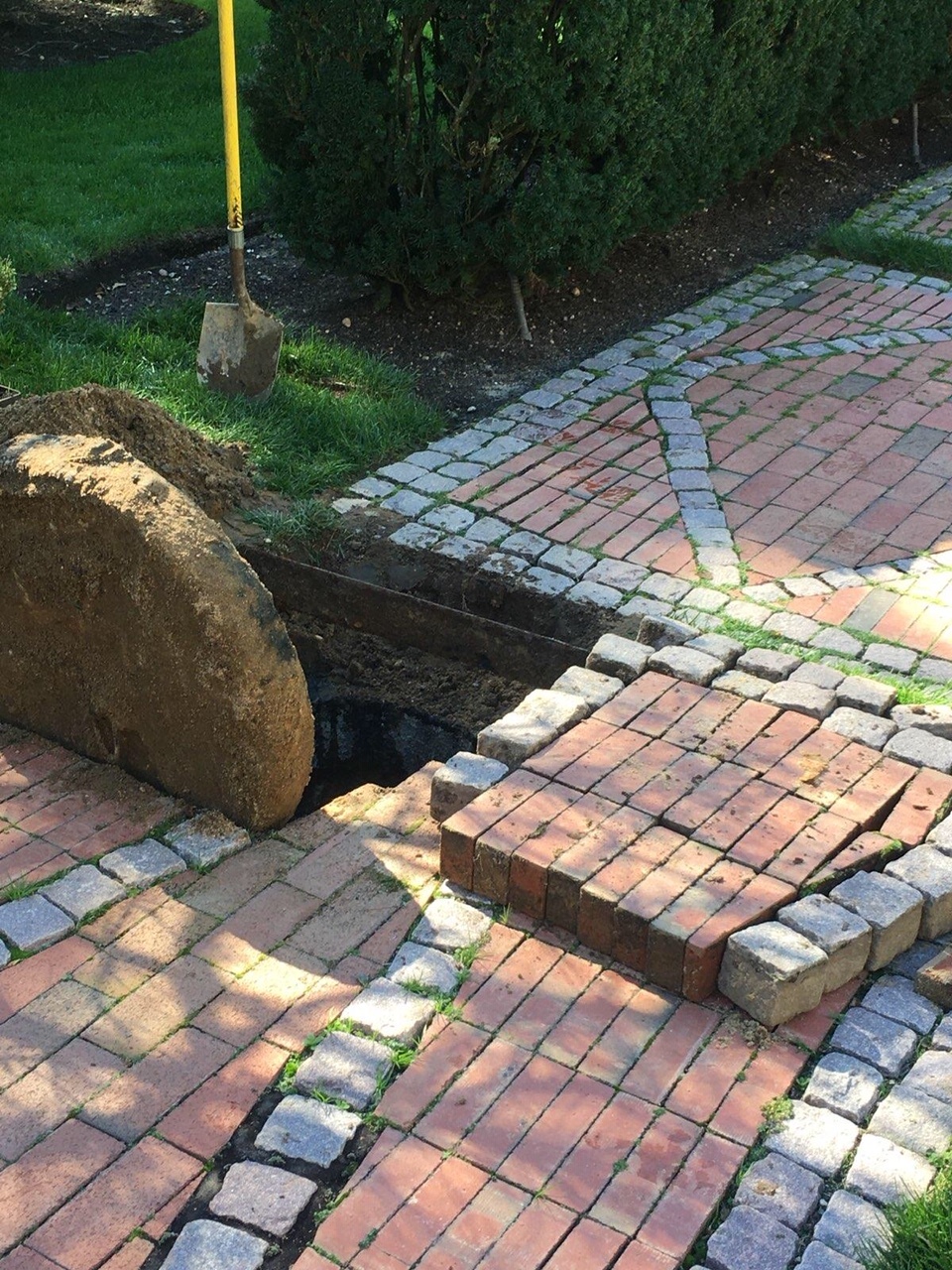 Many homeowners do not know where their cesspool cover is, until they have a problem. COURTESY NORSIC

Old sewage lines may fail and need to be replaced. COURTESY NORSIC 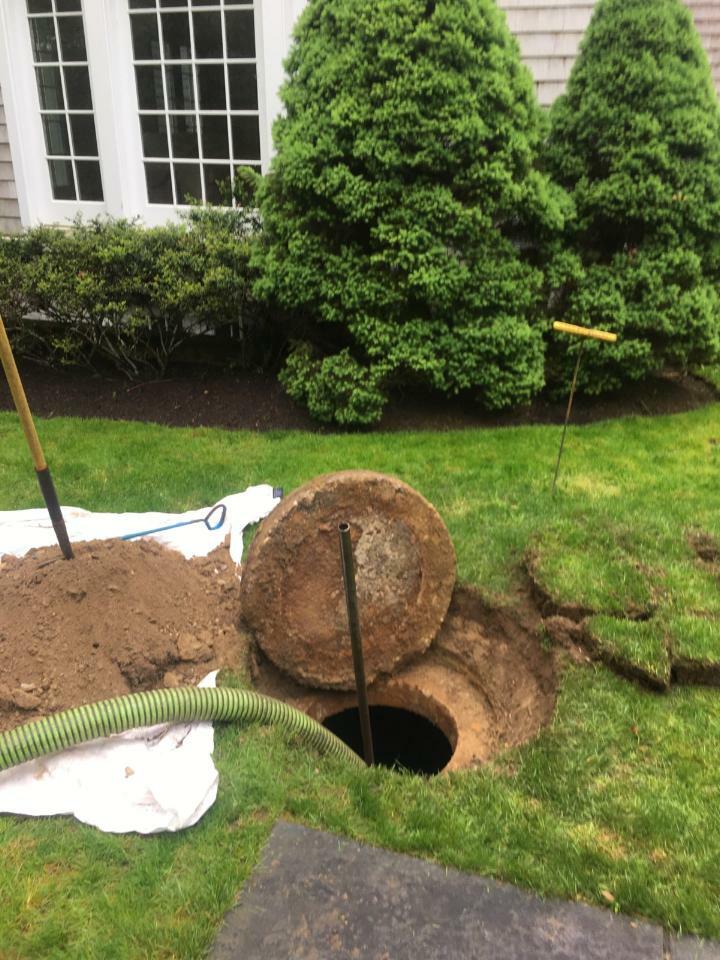 Some cesspool covers are shallow, while others can be several feet underground. NORSIC

Some East End homeowners who previously only came out in summers and on weekends have, at this point in the pandemic, been staying in their second homes for more than seven months straight, and they have been putting their septic tanks or cesspools to use like never before.

Skip Norsic, the owner of Southampton-based sanitation company Emil Norsic & Son, said last month that there has been an increase in service calls for systems that have filled up or become clogged.

Most people came from New York City, where there is a sewer system.

“A lot of people are not used to conventional septic systems that we have out here,” Mr. Norsic said. “Some of the things that they’re flushing down the toilet compromise the system.”

The culprits responsible for clogs are often baby wipes, Kleenex and paper towels, but these days, the things Norsic crews are finding are a sign of the times: Homeowners have been putting used face masks down the toilet, Mr. Norsic said, adding, “they’re even flushing down latex gloves instead of throwing them away.”

Mr. Norsic said the only thing that should ever be flushed down the toilet — that is, besides the obvious No. 1 and No. 2 — is toilet paper. A septic system is not meant to handle anything else.

As far as systems filling up and needing to be pumped out, Mr. Norsic identified a few contributing factors. For one, the amount of wash people are doing seems to be way up. He said people are using a towel just once to dry off and then putting it in the laundry. “Some of the washing machines — it’s just going nonstop.”

There are also more people than normal staying in many homes. Mr. Norsic said homeowners have welcomed relatives to stay with them from New York City and other areas where COVID-19 has been more prevalent.

“They’re using showers more, they’re washing dishes more, and that can fill up a septic system,” he said.

More cooking at home can also lead to issues when kitchen waste is put down the drain.

Mr. Norsic said garbage disposals are one of the worst things for septic tanks.

Cooking oil and grease should never be poured down the drain either. Instead, Mr. Norsic recommends pouring grease into a coffee can, replacing the top of the can, and disposing of it in the trash.

Some pets owners have learned the hard way what not to flush.

“More so than ever, people are flushing pet waste down the toilet, which is not a good thing.” Mr. Norsic said. “In a couple of instances, people were flushing cat litter down, which is really bad because once that stuff gets into water, it’s almost like cement.”

Until recently for many second-home owners, septic systems have been out of sight and out of mind.

Of all the septic systems that are, for the first time, being used on a regular basis, Mr. Norsic suspects that many have not been serviced once since they were installed. “The Suffolk County Board of Health, they recommend every system be serviced between every three and five years,” he said.

One indication that a septic system is becoming full is a gurgling noise in a shower or bathtub that happens when the toilet at the lowest point in the house is flushed, Mr. Norsic said. Running a basement washing machine that drains to a full septic system could also result in this noise.

If the toilet at the lowest point works fine but flushing upstairs toilets creates noises, then that is an issue for a plumber and not a septic company, Mr. Norsic advised.

Other symptoms may appear outdoors: “If the cesspool overflows … the grass will be a lot greener around where the cover is,” Mr. Norsic said.

He noted that houses built before the 1970s have cesspools for all solid and liquid waste, and the bottoms and sides of the cesspools can become plugged over time with sludge, grease and grime. In 1973, Suffolk County began to require septic tanks for new construction, and those systems have overflow cesspools for liquid only.

“A lot of people, they don’t even realize they have a septic system, and when they call us to get serviced, they have no idea where it’s located,” Mr. Norsic said.

He suggests that even homeowners who have no trouble get their hands on a survey and identify where their system is. That way, when they do run into trouble and need service, they won’t have to scramble.

Mr. Norsic said service crews can locate an underground system, but there is an extra charge for that.

“A septic tank might be between 15 and 20 feet away from the house and that’s kind of easy to find just underground,” he said.

But that isn’t always the case.

“In other instances, people have no idea where it is, and we have to use a video camera,” he said. “We go inside the house and use a video camera that has a transmitter at the end of the camera, and then we have a detector that tells us where the system’s located.”

The camera gets snaked down the U-trap.

“It has two caps on it that screw in,” Mr. Norsic explained, “and you can unscrew one cap and insert the camera in the cap and that leads out into either the septic tank or the cesspool.”

Another complication that arises is that sometimes U-traps are covered up during renovations and are difficult to find. Mr. Norsic suggests leaving an access panel to the trap when having the basement finished.

Suffolk County last month adopted legislation that requires all new construction in the county to use innovation/alternative nitrogen-reducing septic technology in lieu of conventional septic systems. Some South Fork municipalities, including Southampton and East Hampton towns and the villages of Southampton, East Hampton, Sag Harbor and Westhampton Beach, already required such systems for new development in high-priority areas.

The systems are effective at removing groundwater-polluting nitrogen from wastewater, but they are also more sensitive to materials that should never be flushed down the toilet or poured down the drain.

“With these new systems, you have to be very, very careful what you flush down there,” Mr. Norsic said. “… You can really run into some problems with the new systems getting plugged up.”