Edgar Papazian Renovates The Triangle House In A Contemporary Mold 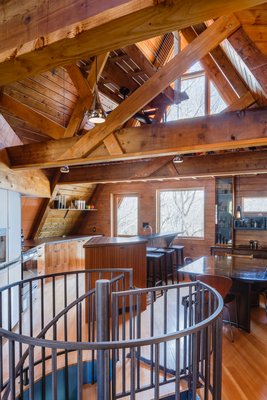 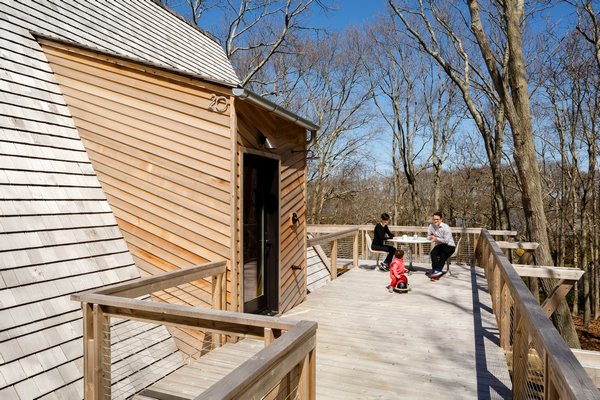 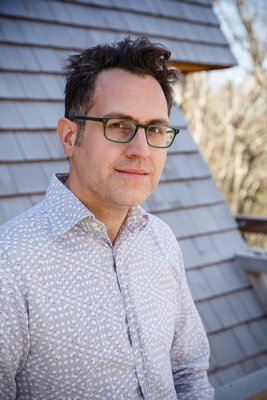 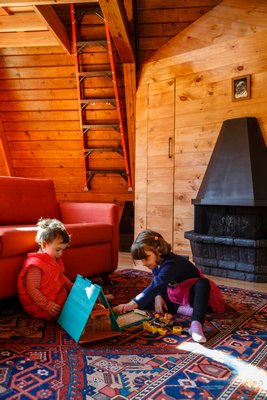 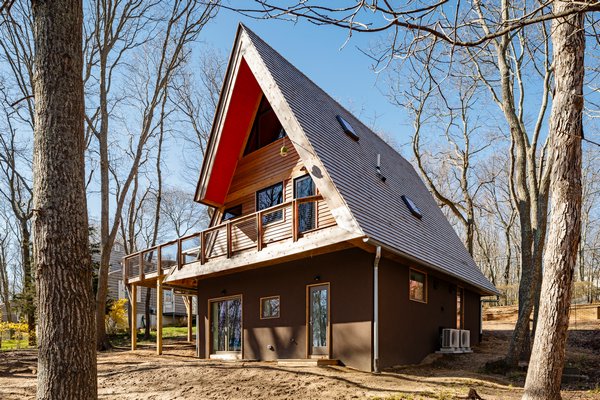 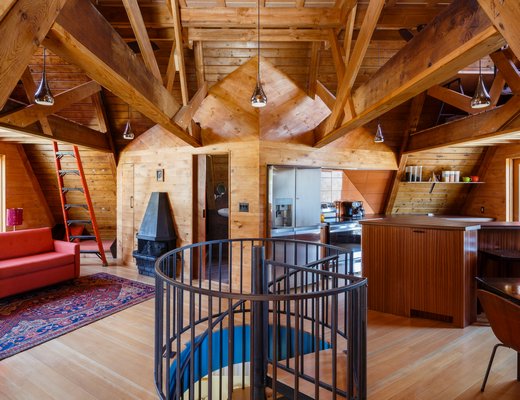 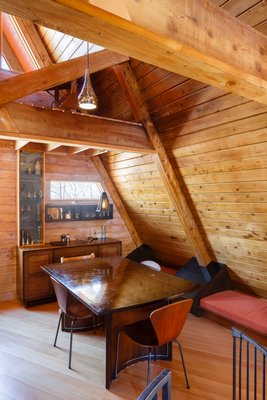 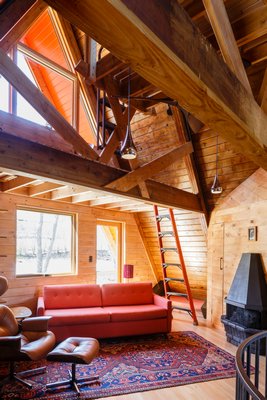 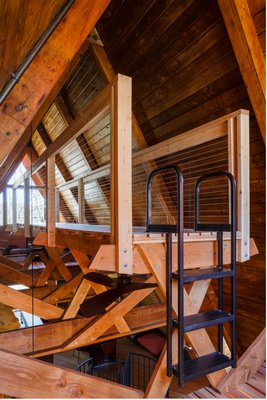 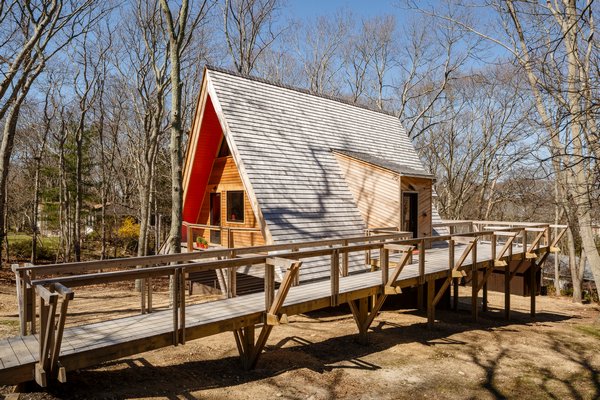 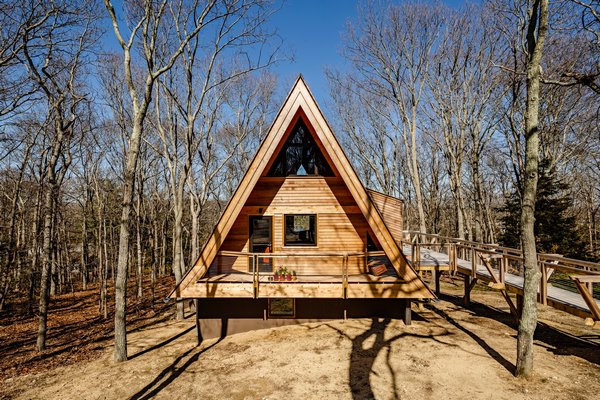 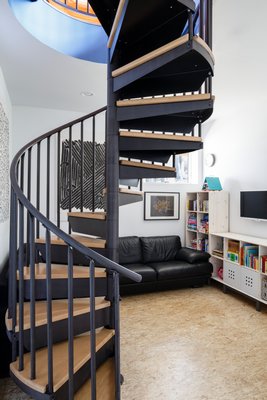 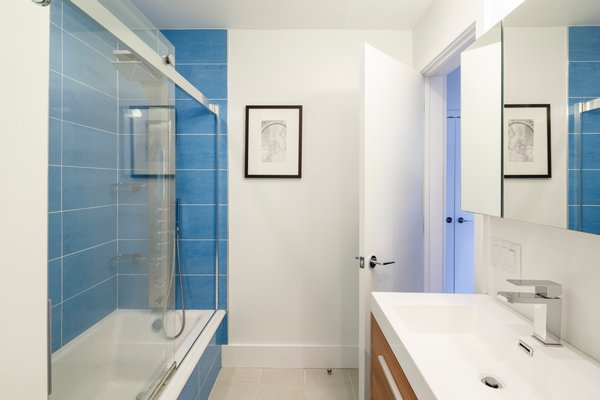 Architect Edgar Papazian’s first house in Portland, Oregon, the Eyebrow House, was featured on the comedic television show “Portlandia” because of its slightly space-age feel. He took a 1940s bungalow and turned it into a contemporary wonder. More recently, he turned his design philosophy to a new project: his family’s home in Noyac, the Triangle House.

“I design in a contemporary mold. I live in our time,” said the Columbia and Yale graduate. “I respect the past and the styles of the past but I don’t design in those styles.”

Mr. Papazian is from Great Neck, Long Island, and was working at an architectural firm in New York City when he met his wife, Michelle Lenzi, a genetic researcher who grew up in Vineland, New Jersey. They married in 2006 and moved to Portland two years later.

During the construction of their first home, they lived on site. “That project was a lot of fun,” he said of his famous creation. But once was enough. This time around, now with two girls, Gigi, 7, and Beatrice, 3, they opted to rent another house during the eight-month transformation of the Triangle House.

“As we lived in the house we started learning about its history,” Mr. Papazian said of the Triangle House. The kit house was delivered by a company in Queens and built by the late Tom Murphy, a New York City policeman, as a summer retreat in 1965. Eventually, Mr. Murphy moved in full time and became the owner of the legendary bar Murf’s Backstreet Tavern in Sag Harbor.

Mr. Murphy added a sunroom to the front of the home. “It didn’t add to the aesthetics or have a proper foundation so we actually reduced the square footage of the house by removing it,” Mr. Papazian said.

They liked that the house was lived in and loved. “It felt nice inside, very warm and comforting,” Ms. Lenzi said.

“It’s why we didn’t whitewash the interior,” Mr. Papazian said. “It was important to keep the patina, the years of darkening, in some portions of the house.”

The angles of the house are a triangle, with 60 degrees at each vertex, adding up to 180 degrees. “This is a very standard design for an A-frame,” Mr. Papazian said of the insanely steep pitch. “It’s also very stiff structurally.”

A long walkway bridges the gap from the road to the front door. The buttresses continue the language of the triangle. Railings are made from nautical rope. “It’s cheaper than steel but looks like it,” he said.

The deck wraps around to the back of the house where a second door leads to the kitchen, overlooking tall oak trees. “The nice thing is the house is elevated enough to be in the canopy of the forest,” he said.

The only addition to the house is the main entranceway, a vestibule containing a closet, where the family can kick off their shoes and hang their coats before heading indoors. When coming from Long Beach, just down the road, there’s an outdoor shower that is almost imperceptible. The red cedar clapboards of the vestibule contrast nicely with the roof’s yellow cedar shingles and galvanized steel gutters.

There wasn’t a real entrance in the old house, nor was there a staircase from the basement. “We had to go outside to do laundry. It was crazy. We never wore clean clothes,” said Mr. Papazian, who turned the basement into a living space. Openings were cut into 15 courses of the concrete block foundation to get windows in every room, including three bedrooms, a bath and TV room. Two glass doors lead to the backyard.

Thanks to Mr. Murphy’s foresight, they enjoy a ceiling height of 9 feet and 7 inches. “We get a lot of light down here,” he said. “The flooring is oriented strand board, kind of wood shavings, not a typical finish material but it’s very durable and has nice patternings to it.”

Most decisions, from the purchase of the 150-foot-by-50-foot property, to the spiral staircase at the center of the house, were based on finances. The entire house, just under 1,200 square feet, was “value engineered.” His design philosophy involves using geometry to solve problems in unexpected ways, which he says work better than conventional solutions, and are comparative in terms of cost.

His Doon Architecture has six active clients. “I’ve been doing my own thing relatively recently,” he said. Plans for additions and renovations dangle from the angled wall of his office with tape. His business comes by word of mouth.

“I believe the root of my effectiveness as an architect is to have compassion for my clients, and to try to listen as closely as possible to what they want from me,” he said. “We bring clients through a very complicated process with a lot of ups and downs and if you don’t have sympathy for them, I believe you have failed in your duty.”

He did not fail when designing the home’s pièce de résistance, a mezzanine that not only forms a triangle with the roof line, but divides his and her spaces at either end of the house. “It’s my commute,” he said of the walk to his office. The space seemingly floats above the kitchen and dining area.

“It’s hard not to talk to Edgar while he’s working,” Ms. Lenzi said.

Awning windows flap open from the bottom. “I used those on the front and back of the house,” he said. “I liked them aesthetically and it echoes roof angle when you open them.”

The house was not winterized prior to renovations but has passed the Home Energy Rating System test thanks to structural insulated panels, or SIPs, outside of the sheathing, on top of the roof. “We built out instead of in,” he said. There’s an electric stove in the living room but the house is so tight they never need the extra heat.

The living space’s warm woods lend a grainy and retro feel. “Instead of obliterating it and turning it into something it’s not, we kind of updated it,” he said. The eaves over the front porch are painted orange.

“It glows when it’s sunny out,” Ms. Lenzi said. The color reflects back to the kitchen, as do the sharp forms in the angles of the countertop, and continue down to the Douglas fir flooring that meets the circular staircase in the middle. You can be sure, any renovations function as a by-product of the composition.

“Eventually we may bust through the dining area and put windows in,” he said. “It would be nice to see the kids outside.”