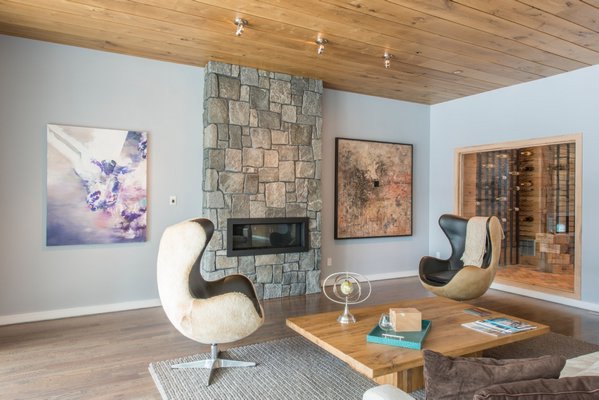 In the family room, a painting by Hermann Mejia, left, and a mixed-media panel by Darlene Charneco. COURTESY PAUL DOMZAL/edgemediaprod.com 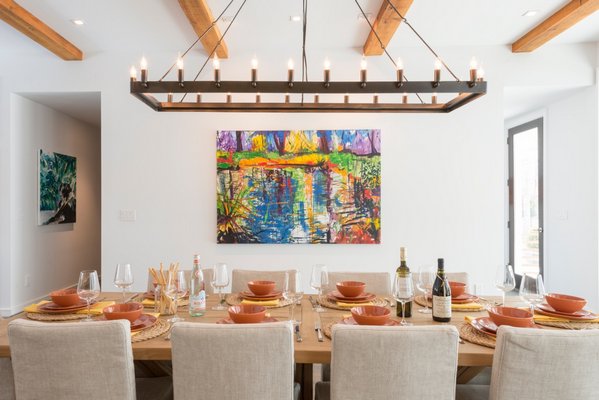 In the dining area, a painting by Astolfo Funes, center, and one at far left by Hermann Mejia. COURTESY PAUL DOMZAL/edgemediaprod.com 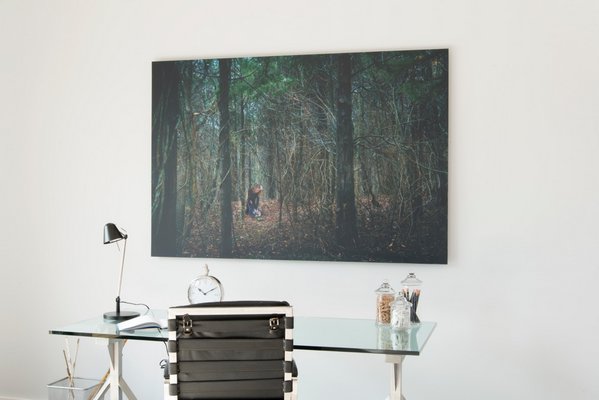 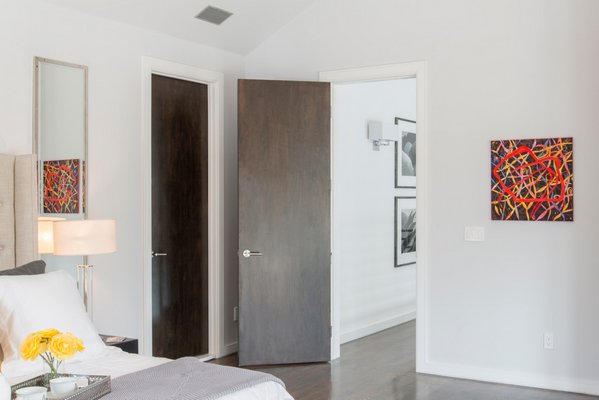 In the master suite, a painting by Roy Nicholson, with drawings by Maria Schon in the background. COURTESY PAUL DOMZAL/edgemediaprod.com

Architecture has been described in diverse ways, but a single word encompasses it concretely: experience. And one recently built home on Hands Creek Road in East Hampton, labeled “The Modern Barn,” evokes such experience.Entering this structure on a snowy, dark Saturday night made visitors forget the difficult weather conditions. Between the flow of the space and the artwork that had been chosen to interact with it, we felt as if we had stepped inside a different world, where we could abandon our preoccupations and absorb our setting.

Art and design are both organic to one’s experience of the Modern Barn, six of which have been built by the husband-and-wife team at Plum Builders Inc. and their architect, Alexander Gorlin, since their first one on Jericho Road in East Hampton in the early 1980s. Three more of the trademark-design buildings are in the works.

“The barn is the most organic structure in the Hamptons, going back to Colonial times,” said Al Giaquinto, the company’s president. The experience of free-flowing space is essential, he said.

“Individuals can interact with each other, whether it be their spouses, offspring or grandchildren, without being tied to one certain room,” agreed Mary Giaquinto, the company’s chairwoman. The Modern Barn is designed so that any single area can be multi-purposeful—used for a retreat, a reunion or recreation, for example.

Art consultant Esperanza Leon of Solar Gallery had additional ideas concerning the creation of experience. A connection to nature is suggested, as when Roy Nicholson’s small abstraction “Toxic Garden” mirrors the tangles of tree branches seen through a bedroom window.

The same experience exists with Dalton Portella’s wooded area, in “Jane’s Forest,” as well, when looking out the same window.

Inside the house itself, an experiential bond exists between Astolfo’s Funes’s abstraction “Paisaje” and the dining room table, where shapes are similarly colorful and densely arranged.

While these particular examples of experience signify harmony between artworks and natural surroundings, there is also an element of unpredictability in their positioning. At the top of the second floor, Maria Schon’s rectangular-framed photographs overlook a diagonally placed staircase that reaches for the sky, forming a coalescence of stability, in the photographs, and movement, in the staircase.

A Darlene Charneco piece with nails calls attention to a nearby stand, holding wine bottles, that is composed of similar sharp shapes. Maria Schon’s paintings, which resemble a tropical forest, pick up green and blue colors in sofa pillows. And a photograph by Miquel Salom above a bathtub might make us ponder the circular form and all it can symbolize.

Ms. Leon said she selected art pieces that would focus on the horizontal plane rather than the vertical one, and that she did not want to use symmetrical composition—that is, putting paintings next to each other in a balanced way. “This would be so predictable,” she said.

Certainly such unpredictabilities and surprises expand the notion of our experience with architecture.