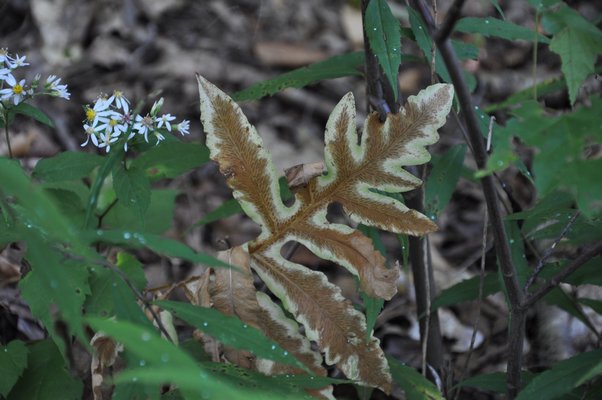 Referred to as a “fertile frond,” the underside of this fern frond is showing the area in brown where the spores are produced. When the spores are “ripe,” they can easily be taped onto a piece of white paper and either stored or used to begin the next generation of ferns. ANDREW MESSINGER

Recently I asked a beginners class of home gardeners to tell me two things that came to mind when they thought about ferns. In almost every case their first associations were with woods and shade. It’s probably a similar reaction that most of us have when we consider these unique plants. But, as I mentioned last week, there are hardy ferns that grow in full sun, in sandy soil, from between crevices in rocks, climbing up tree trunks for 10 feet (unless you have the hardy Asian variety that grows up 40 feet) and floating on the top of ponds.

No, you don’t have to go to the far reaches of Africa or the rain forests of Hawaii to find great ferns, because many of these ferns can be found in the wild all over Long Island, save for the climbing ferns, which are very rare. I know of only one growing in Connecticut and one in Pennsylvania, and their exact whereabouts are a very well protected secret.

Well more than 50 varieties of hardy ferns can be grown out here and, as with any plants, some of these will offer more of a challenge than others. But if you really get hooked, you’ll undoubtedly want to grow some of the more unique fronds that can’t be bought by mail or at the local garden center—you’ll have to grow them from spores. Toward this end, you should get to know the American Fern Society at amerfernsoc.org. I was somewhat skeptical when I first set out to grow my own ferns from spores, as I’d heard how tricky it could be, but much to my and my garden’s delight, several months later I had hundreds of new ferns to plant, all started in a plastic shoe box in my kitchen.

What follows is a brief list of some of the more easily found and cultivated “native” ferns, which can be purchased online, at local garden centers or at plant sales at botanical gardens. Many local garden centers still have a good selection of potted hardy ferns, you can buy them over the internet and you can also find spores for sale and through the AFS.

ADIANTUM – These are the maidenhair ferns, which are noted for their fan-shaped pinnules (delicate airy foliage). A. pedatum, commonly known as the American maidenhair and native to North America and east Asian woods, is a shade garden favorite and is deciduous.

ASPLENIUM – These are called the spleenworts and include some 700 species from all over the world. Their leaves, usually evergreen, may be simple, deeply cut or compound. The ebony spleenwort (A. platyneuron) is a good choice for shady rock gardens. Many maidenhairs and spleenworts grow best in more alkaline soils found in conjunction with limestone rock (or home foundations).

ATHYRIUM – This genus of about 25 species are often called lady ferns and have foliage similar to many of the Aspleniums, but these ferns are not evergreen. They are native to the temperate woods and higher (colder) elevations in the tropics. The very popular Japanese painted fern (A. nipponicum) resides in this group and much breeding done on this species has resulted in plants ranging from 10 inches to over 2 feet tall. In addition to the variation in height there is also great variation in colors—enhanced reds to silvers and greens. There can be great variation from one nursery’s stock to the next. So if you want to do a Japanese painted fern garden, you may want to purchase all of your plants from one source at one time to minimize color variations within your plantings.

A slower but less costly way to develop your painted fern collection is by dividing the plants. This can be done about every other year in early spring just as the foliage begins to show growth at the crown. After a couple of weeks of growth, you can see where you can make a natural division by lifting the entire plant out of the ground and using a sharp long knife or spade to split the crown where there’s an obvious break in the foliage. This work is best done on cloudy or even rainy days.

BOTRYCHIUM – This group, native to North America, Europe and Asia, includes the grape ferns and rattlesnake fern. They do not have scaly creeping stems nor is their new growth in the fiddlehead form of many ferns. Sporangia (spores) develop on erect spikes that rise from the leaf stalk of mature plants.

CYRTOMIUM – These Old World ferns, which include the popular Japanese holly fern, have scaly rhizomes and leathery leaves and are easily grown in this area. These plants were formerly used primarily as house plants in Victorian England, but it turns out that they are quite hardy outdoors.

DRYOPTERIS – Known as the wood ferns or shield ferns, the 150 or so species of this group include native American ferns that are favorites in woodland gardens. This genus has the deeply cut and finely divided leaflets that typify “classic” ferns. Many varieties are nearly evergreen and colorful throughout the winter.

MATTEUCCIA – Ostrich ferns (M. struthiopteris) reach heights of well over 3 feet and are good choices for background plantings and groupings. Underground runners will spread in all directions to establish new plants. When provided with ample water, the ostrich fern is relatively easy to grow and can take more sun than most other ferns. The young developing fronds, known as fiddleheads, are cooked by some as a delicacy. This fern may need to be managed because when it’s happy it likes to spread.

OSMUNDA – This genus includes the well-known temperate ferns that are good choices for woodland gardens. The cinnamon fern (O. cinnamomea), noted for its fertile “cinnamon stick” and vigorous sterile fronds, will thrive in moist, acidic soil. Interrupted fern (O. claytonia) has two or more fertile fronds that grow part way up the stem and so “interrupt” the sterile part of the frond that forms the leafy portion. The royal fern (O. regalis var. spectabilis) has flower-like groups of spore cases that rise from the top of leaf-like blades. This fern will do best in open shade on wet, highly acidic soil. The Osmundas spread very slowly.

PHYLLITIS – The single hardy fern in this group (P. scolopendrium) is native to Europe but has naturalized in the U.S. Known as the hart’s-tongue or deer’s tongue fern, this plant is noted for its wide fronds with wavy margins.

POLYPODIUM – Slow growing and quite easy to cultivate, these ferns have leathery fronds and shallow root systems. The genus has over 1,000 species in North America and most are evergreen.

POLYSTICHUM – This group, the holly ferns, are found around the world as well in America. The Christmas fern (P. acrostichoides) is a robust evergreen member of this genus and an excellent choice. The pinnate fronds are long with sharp-toothed margins. These ferns are tough and easy to grow.

So, think about how ferns will fit into your garden and if you’re up for the challenge of growing some from spores. These plants are virtually insect and disease free and all they ask for is the proper soil, light and a little water to get them established. There are a number of online fern resources so if you need some links just drop me a line. Keep growing.