First Come The Chickens, Then Come The Eggs - 27 East

First Come The Chickens, Then Come The Eggs 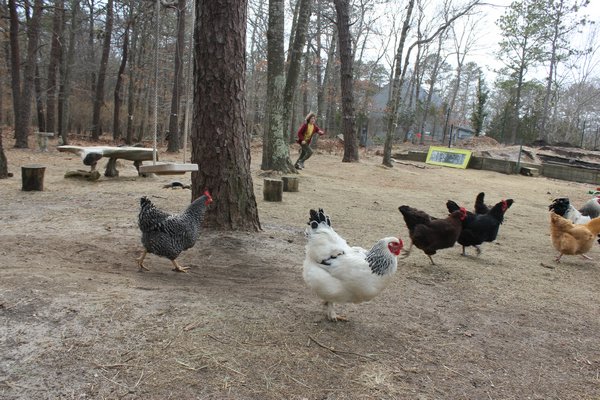 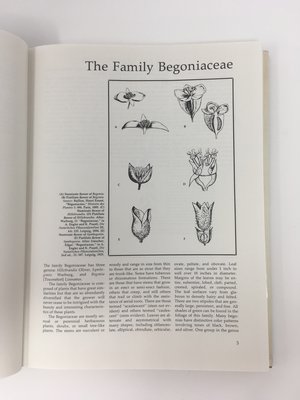 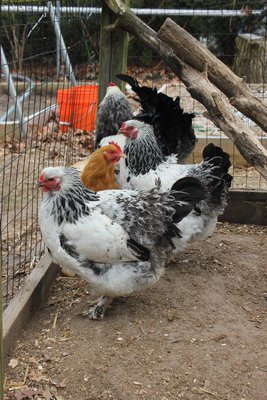 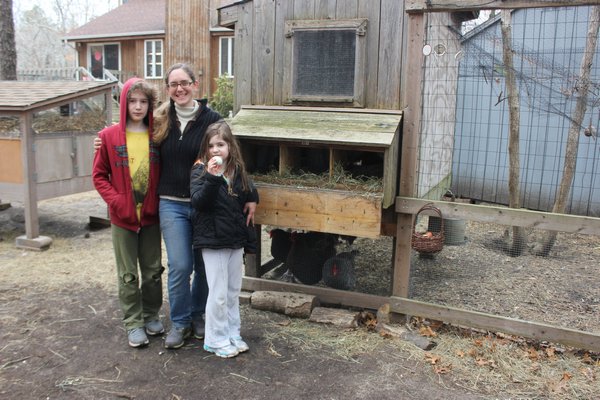 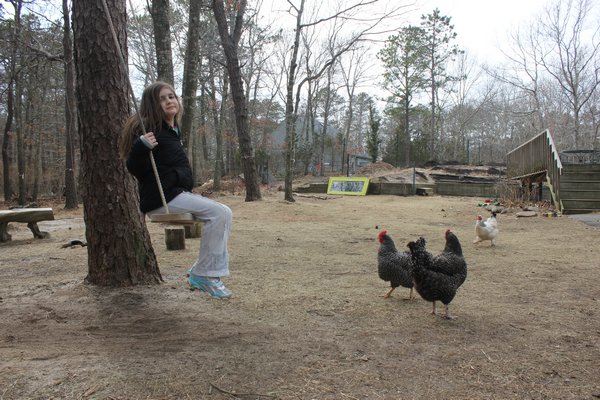 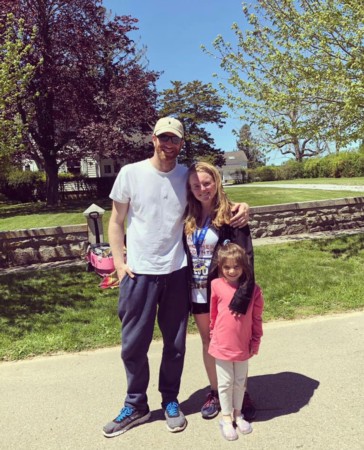 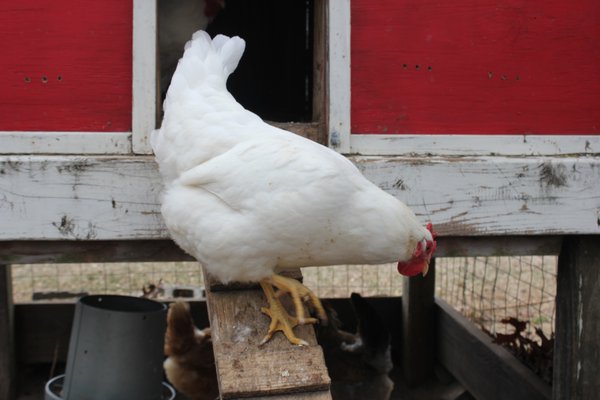 The Stephens family outside their chicken coop on their homestead in Hampton Bays. CAROL MORAN BY CAROL MORAN

When Rachel Stephens holds classes on raising backyard chickens, she always offers a warning to those gathered at her homestead farm in Hampton Bays: it can be addicting. And lately she’s seen interest spike in the hobby, as more people take steps to connect personally to the food they eat.On a recent drizzly afternoon at Sweet Woodland Farm, Ms. Stephens opened the door to the coop and let her chickens roam the fenced-in property, while her children, Rayna, almost 8, and Ben, 10, bopped around the yard.

“You know, chickens are the closest thing to a dinosaur,” said Rayna, who seemed capable of holding her own classes on raising a backyard flock.

The benefits of raising chickens extend beyond the nutritious golden yolks that spill out of the freshly cracked eggs, Ms. Stephens said. But for Katherine Burke, a chef, that is reason enough.

“There is no comparison—it’s apples and oranges,” she said of the eggs she and her husband gather from their hens in East Hampton. “The difference is visible as soon as you crack the egg open because the yolks are a deep, deep golden yellow and the eggs at the store are pale.”

That fact, Ms. Stephens said, is largely due to the healthier diet that backyard chickens have. “You know what you’re feeding them,” she said.

While she opts to use organic feed, it can be on the pricier side. Chickens also munch on bugs—including ticks, an added benefit—and grass, dietary staples not guaranteed with store-bought eggs.

Mark Bridgen, a professor of horticulture at Cornell University, pointed out last week that chickens are far from picky. They will devour table scraps—anything aside from meat or bones—a more sustainable alternative to dumping leftovers in the trash.

“Chickens are easy,” he said. “They’re not expensive and they are really easy.”

He has been raising his own chickens at his Southold home for about seven years, and like Ms. Stephens, gives talks on the practice. “I find them to be very relaxing, very peaceful,” he said of his flock.

He recommended that people begin with a set of chicks, which must be raised under a heat lamp for the first few months of their lives. Though Southampton and East Hampton towns do not limit the number of chickens residents can raise on their properties, state law requires that chicks be sold in groups of at least six to prevent people from purchasing them as “novelty items.” Chicks can be bought at Agway in Riverhead, as well as from the Stephens family, which will receive a new shipment on April 21 and charges between $6 and $10 a chick.

The most labor-intensive step in raising a backyard flock is setting up the chicken run and henhouse, which requires a bit of strategy to keep predators at bay. Hawks, raccoons and foxes are the most common creatures that prey on chickens, but Ms. Stephens pointed out that loose dogs have also wandered onto the farm to stir up trouble.

She and Mr. Bridgen both recommended providing about two square feet of space per chicken inside the henhouse, with a few nesting beds where the chickens will lay their eggs. The beds in the Sweet Woodland Farm hen house are neatly sectioned off with curtains, though that step is not necessary, Ms. Stephens said.

During the day, the flock should have the ability to wander from the coop into a fenced-in area where the chickens can roam freely, though it should also be enclosed with wire above, to keep out hawks. Ms. Stephens recommended hardware cloth, which is a bit thicker and more reliable than chicken wire. She also recommended burying the fencing around the perimeter, to prevent predators from digging underneath, and locking the door to then henhouse at night.

“Raccoons are really crafty,” she explained.

In addition, she recommended putting a south-facing window in the hen house so that the chickens have light, and integrating vents into the structure to control airflow and moisture.

Although Mr. Bridgen advises those new to raising chickens not to get to a rooster, to avoid the noise, Ms. Stephens said her family’s rooster, Roy, is essential in warning the flock of nearby predators when the chickens roam outside their run. When a hawk flies by, the rooster crows, and the chickens run for cover.

Once the coop is set up, the day-to-day work is simple: open the henhouse in the morning and close it at night, and make sure the chickens have fresh food and water, Mr. Bridgen said.

But, as Jeff and Melissa Micari pointed out, some challenges should be expected.

The two raise a flock in the backyard of their Flanders home, and they said it has been a learning process. They’ve dealt with the occasional chicken eating its eggs—a problem that they solved by moving the nesting boxes outside of the henhouse, where there is more light. Placing an egg filled with mustard in the henhouse should also do the trick, as Rayna Stephens pointed out.

Mr. Micari also built another, smaller coop on his lot, which he dubbed the “grow-up coop,” in which to raise new chickens before introducing them to the flock. He explained that chickens establish a pecking order at a young age, and bringing in new chickens usually results in fighting.

Ms. Stephens’s solution to that problem is introducing chickens to the henhouse under the cover of night, so as to trick the flock and avoid problems.

While major disease is usually absent in backyard flocks, chickens occasionally do fall ill, sometimes with common digestive problems that can be solved simply by feeding them yogurt, she added.

Hens typically lay five or six eggs a week, though they slow down during the winter months when sunlight is less available. An issue families must grapple with while raising a backyard flock is what to do with chickens once they stop laying eggs, usually after three or four years of age. Some choose to eat the chickens, but Mr. Bridgen said their meat will be tough at that point, perhaps suitable only for stew.

He added that in his experience, the older chickens tend to become slower and fall prey to hawks or foxes, naturally thinning the flock. The Micari and Stephens families both chose to keep their hens even after they’ve stopped laying, though that option is less cost effective.

“It is one of the facts of raising chickens,” Mr. Bridgen said. “You have to realize that they can live to 11 years.”

For the Stephens family, the chicken flock is an aspect of their sustainable, healthy lifestyle that ties in with other parts of the farm. The chickens provide manure, which Ms. Stephens uses to fertilize her organic vegetable beds, for example.

And despite the challenges, Ms. Micari said her family plans to continue raising chickens for a long time to come. They fell in the love with the practice from the moment they found the first egg in the henhouse, an event that magically coincided with the birth of their second child. The hobby has also been educational for their children, as it has been for the Rayna and Ben Stephens.

Rachel Stephens will host one of her workshops on raising chickens at Sweet Woodland Farms on April 13 at 2 p.m. The cost is $10 for adults, free for children 12 and under. Anyone wishing to order day-old chicks can call the farm at (631) 594-1789 or email sweetwoodlandfarm@yahoo.com.