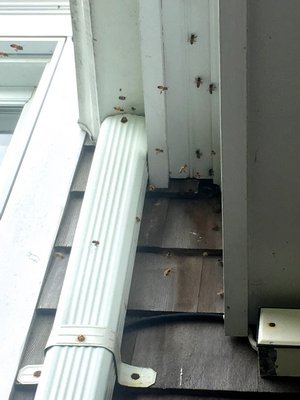 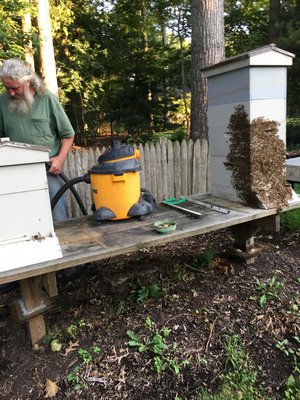 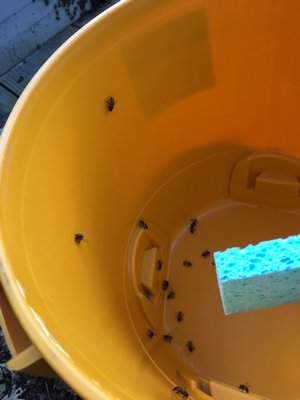 Slightly bewildered test subjects wondering how they got into a shop-vac bin. The sponge provided incoming bees with a landing pad. LISA DAFFY 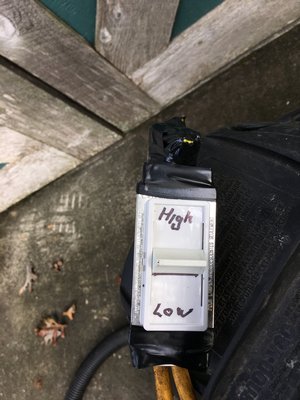 Modified on-off switch to turn a shop-vac into a bee-vac. LISA DAFFY 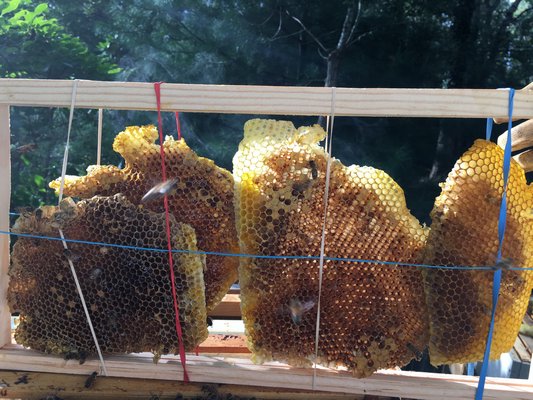 Free bees! At least, that’s what I heard Missy say when she called. That is not precisely what Patrick took away from the exchange when I relayed it to him. What he heard was, “Hey, lots of thankless work and probably some stings coming your way!” Since he tends to be the sane realist in this marriage, I probably should have listened to him.

A friend had given Missy my number as someone who might be able to help with the colony of honeybees that was living in the roof over her deck.

She said she didn’t want to kill them, but she really couldn’t have them living there. That’s an admirable position—as well as a rational one. It’s obviously better for that colony, and honeybees on the whole, if they’re not exterminated. It also doesn’t make sense to kill a colony of honeybees that’s moved into your house.

When honeybees take up residence, they think long-term. They build lots of wax comb and fill it up with honey and pollen. It’s nice and tidy as long as they’re living there doing the housekeeping, but kill the bees and you’ll soon be dealing with a host of vermin delighted to feast on their leftovers, including ants and rats.

Ideally, you want to prevent them from moving in, but once that ship has sailed, your choices are to have them killed and have all their paraphernalia removed, or have a beekeeper remove them and their luggage and move them alive. Either way, you’re looking at a construction project, and doesn’t it feel better to save something than to kill it?

We had never done a “cutout” before (that’s what it’s called when you cut a colony of bees out of its environs to move it to a more geographically desirable location), and this seemed—at least to me—like a good one to start with. Especially since Patrick would be doing all the heavy lifting.

We went to have a look, and sure enough, there was a steady traffic flow of honeybees going in and out of a small hole in a corner where the roof deck met the wall of the house. It was reasonably accessible by someone with a good sense of balance and a sturdy ladder. (That would be Patrick again).

I did some Googling to figure out a strategy and called a friend with a lot of experience doing cut-outs. “I never do one for less than $1,000,” she said. That gave me pause. She explained that with wild bees, you just don’t know what you’re getting. They could have landed in that roof simply because they were an expansion colony launched from a strong existing colony nearby, which could make them a good find.

Or they may have been trying to get away from a home plagued by bee vermin like small hive beetles or varroa mites, in which case there’s a pretty good chance they brought trouble with them. Or they could just be flighty, prone to up and leave at any perceived slight, which would mean going to all this trouble only to have them fly off again. Also, because it was already early fall when we heard about them, there wasn’t a lot of time to get them out and acclimated to a new home before winter set in.

And while you’re pondering the sanity of bothering with this, keep in mind that a nicely packaged starter colony of bees, certified disease-free, can be had for around $200. You can see why Patrick was less than excited about my free bees.

So while I went into my honeybee happy place, envisioning a big family of bees settled into their new hive, foragers happily bringing home loads of nectar and pollen, Patrick got practical.

His first strategy was to try to lure as many of the bees out of the roof as possible so there would be fewer to argue with when he broke into their home and really ticked them off. He built a cone and affixed it to the hole, so—in theory—bees could come out, but they couldn’t go back in. He left a hive box nearby stocked with some nice waxy frames and sugar water, hoping to entice the ones who were stuck outside to move in until the rest of the family could join them.

Checked on it the next day. The bees had found another hole to get back into the roof. So Patrick cut a hole in the edge of the roof to get a good look at what was inside. He found a cluster of honeycomb had been built near the entrance hole, then apparently abandoned when the bees moved about 10 feet further along the wall, where they were now living. The roof also held an abandoned wasp nest. Quite a busy place!

Standing on a ladder, in full beekeeper hazmat gear, he cut a new hole close to the active colony, used a long serrated knife to cut the comb off the rafters it was moored to, and carefully moved all six panels of honeycomb into the waiting hive box, checking to make sure he had the queen.

Then, using a shop vac modified to allow him to control the intensity of the suction, he carefully gathered up as many of the remaining bees as he could, unloading them into the hive box and closing it up tight.

We set the new kids up as far away from our other hives as possible, just in case they were carrying something undesirable, then left them closed in until the next morning so they’d have a chance to settle down before they began exploring their new neighborhood.

I carefully attached the cut-out comb to empty frames with rubber bands, which would make it easy for the bees to attach the comb to the frames with wax. We gave them a frame of honey from one of our other hives, and added a feeder full of sugar water to give them a leg up on getting enough food stored for the winter. Everything looked great, and considering all the shaking and stirring they’d been exposed to, the bees were remarkably easygoing.

Two days later I pulled out the bottom board to find it crawling with small hive beetle larvae. Apparently, the comb was infested—which is probably why they had already moved once, from one part of the roof to another. I pulled out the frames, cut out the sections where I could see hive beetle larvae, installed a hive beetle trap, dusted the bottom board with diatomaceous earth to kill any falling larvae, and closed it all back up.

Checked again a few days later. A whole new batch of larvae had hatched and were sliming across the comb, eating up the stored food and generally creating an unlivable environment for the bees. I got rid of what I could, but at this point figured it was pretty much a lost cause. Sure enough, a few days after that, the bees were gone. I put the contaminated frames in the freezer to kill off any remaining vermin and decided that maybe, just maybe, I would listen to Patrick next time.

Nah, who am I kidding? That’s not gonna happen.