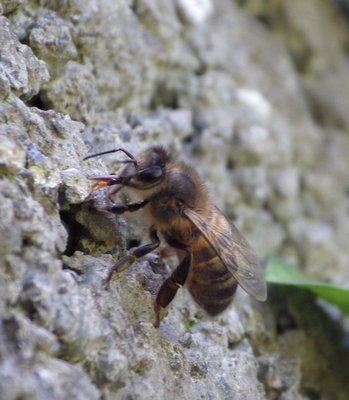 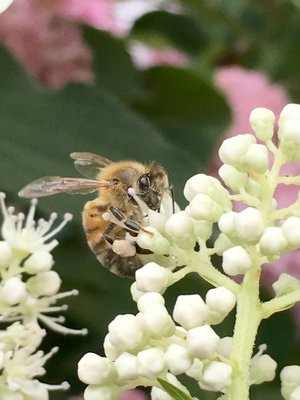 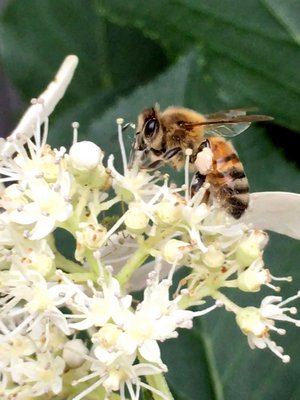 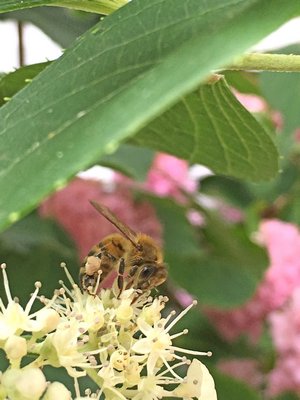 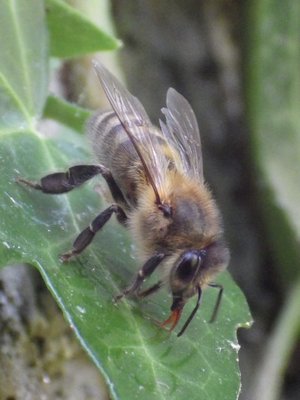 I’ve been thinking a lot about bee faces lately.

I read some time ago that bees have human facial recognition, meaning that they can tell me from you. This sort of makes sense, and it comes in handy if you’re a honeybee trying to maintain household order.

Every couple of weeks or so, I pull the roof off their home, remove a few walls, poke around inside for a bit to see if everything is as it should be, and put it all back together as carefully as I can so few if any bees are harmed. If they go nuts and throw up the alarms every time I do that, they are going to waste a lot of energy—and quite possibly more than a few bees—staging a counteroffensive.

But they learn to recognize me, and the consensus seems to be, “Okay, we’ll keep an eye on her, but no need to get our stripey knickers in a twist.”

If you, on the other hand, went poking around in their hive, you would probably face a full-court defense and come away polka-dotted with bee stings.

So, while their ability to differentiate familiar people from strangers makes sense, it still astounds. I often fail to recognize people with whom I am acquainted when they greet me on the street. The notion that bees can do so fascinates me.

It also made me wonder if I could learn to distinguish one bee from another.

Well, the answer is, no, I can’t. I mean, yes, I see that there are small differences from one bee’s face to another’s, but would I recognize Agnes five minutes later if she flew off to get some grub and came back home? No. She would look virtually identical to Brenda, Helga and Natalie.

But studying their little faces turned out to be fascinating in its own right. For starters, they look like aliens, the ones referred to as “big grays.” Enormous, dark, furry eyes set at an angle in a face that narrows to a point at the mouth end.

Yes, I said furry. Think about that. Imagine for a minute that your eyeballs had hairs growing out of them. But, wait, it gets weirder. Because those big eyes are actually compound eyes, with thousands of tiny lenses. Each lens occupies a different piece of real estate on the curved surface that is the entire eye. Putting all those images together, a bee can see nearly 360 degrees. Don’t try sneaking up on a honeybee—you can’t do it.

On top of the bee’s head, in a triangle, are three more eyes. These are very small and designed to see changes in light rather than defined images. Handy for spotting a predator swooping down for a honeybee snack, these small eyes, called ocelli, are also believed to help bees triangulate their position relative to the sun and thus find their way home from as far as five miles away.

Bees have an impressive field of vision, but it’s not as sharp as ours, and they don’t see the color red. As a consolation prize, they can see ultraviolet light, which we cannot. That ability helps guide them to nectar “bull’s-eyes,” a sort of nectar map visible in the ultraviolet spectrum on many flowers, including sunflowers and pansies.

As for the eyeball hairs, those grow at the intersections of the lenses. Scientists believe they help the bees detect breezes and stay on course when the wind kicks up.

Moving down the face, we are looking for a nose. There is none. Perhaps as atonement for having more than twice the number of eyes generally considered appropriate, bees do not have noses—button, hook or otherwise.

Bypassing where the nose should be, we come to the mouth. Bees have incredibly strong mandibles, or jaws, that protect more delicate parts of the mouth. The most noticeable mouth part is the proboscis, which looks sort of like an elephant’s trunk on a very small scale, around one-quarter of an inch on an average honeybee.

The proboscis, consisting of a tube within a tube, is the bee’s tongue. It’s soft and can be extended to reach deep into the center of a flower to collect nectar. The bigger, outer tube lets the bee suck up larger quantities of liquids like water and honey. The smaller tube, housed inside the larger one, is used for collecting small amounts of liquid, like nectar from flowers. This tube also features a hairy, spoon-shaped tip that makes it easier to vacuum every last bit of nectar from a flower.

Bees don’t have teeth, but they do have strong mandibles, handy for all kinds of chores, from cutting themselves out of their own brood cells while they’re hatching, to making honeycomb, to dragging dead bees from the hive. The mandibles can be extended or folded up, depending on what the bee is doing, and they can be used to bite—usually other insects that invade their space, including beetles, wasps, mites, moths and spiders.

So, there you have it—a bee’s face. People are generally so worried about the end with the stinger that they don’t pay much attention to the front end. But take a look next time one is collecting pollen in your flowers or having a sip of water from your fountain.

And for those of you who think writing a column like this is all flowers and honey, a note: While deep in research for this piece, which involved staring very closely at bees’ faces while they were puttering around on the hive doorstep, I learned a valuable lesson: The most painful place to be stung by an annoyed bee is on the nose.

As of this writing, my right nostril is swollen, tears are running down my face, and I’m sincerely hoping that the bee that stung me died in pain and regret.

Journalism is not for the timid.