GARDEN NOTES: Effects Of Drought Will Be Seen Now And Into Next Year - 27 East 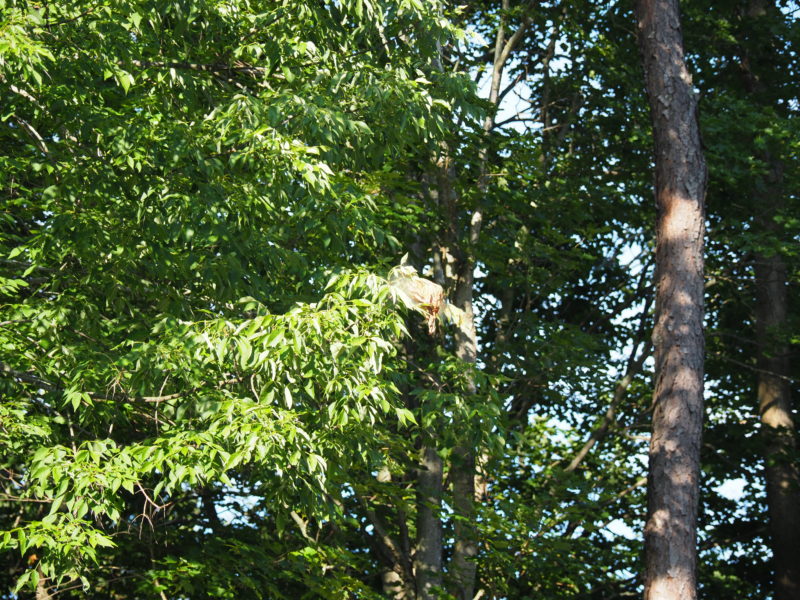 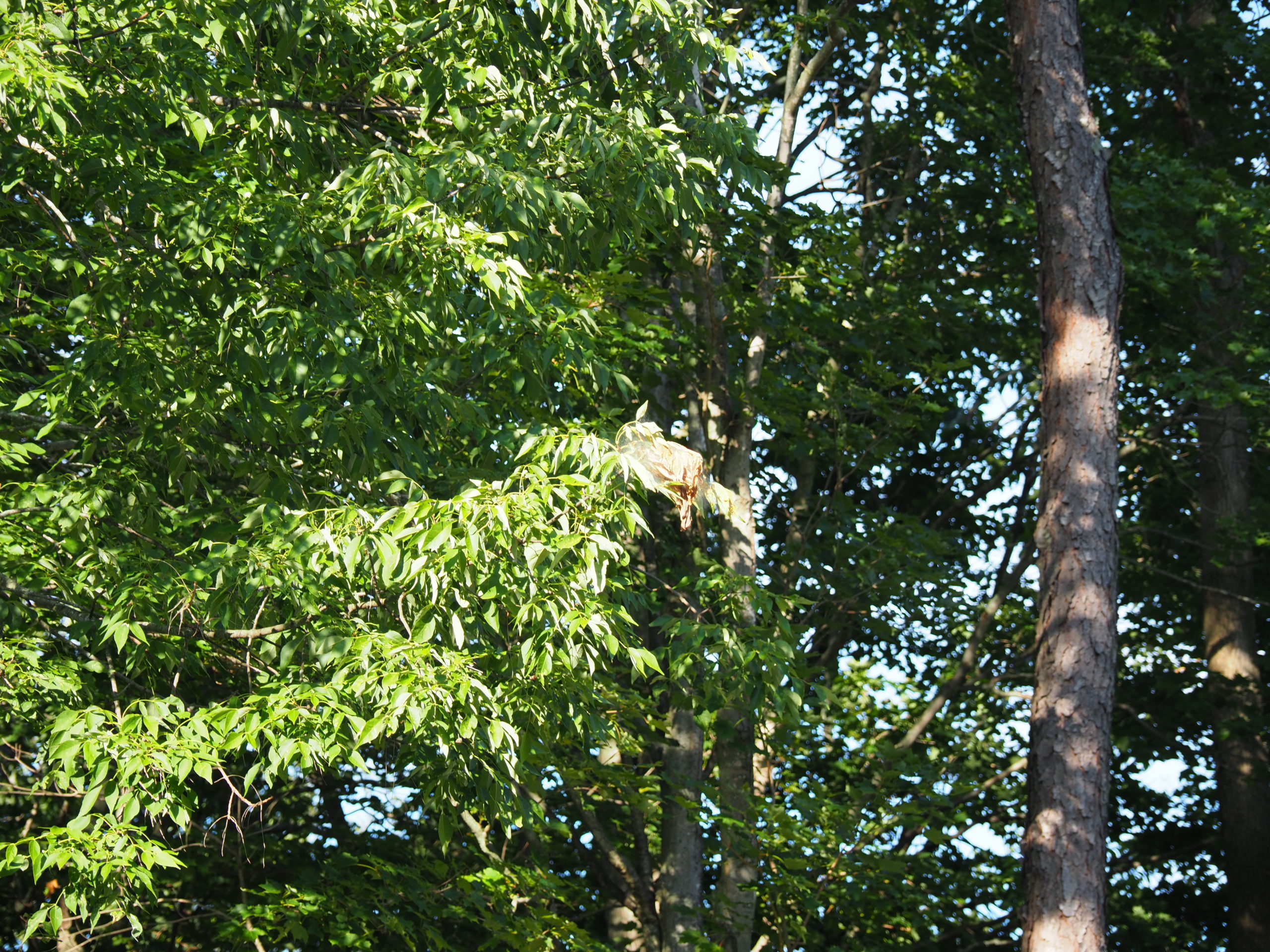 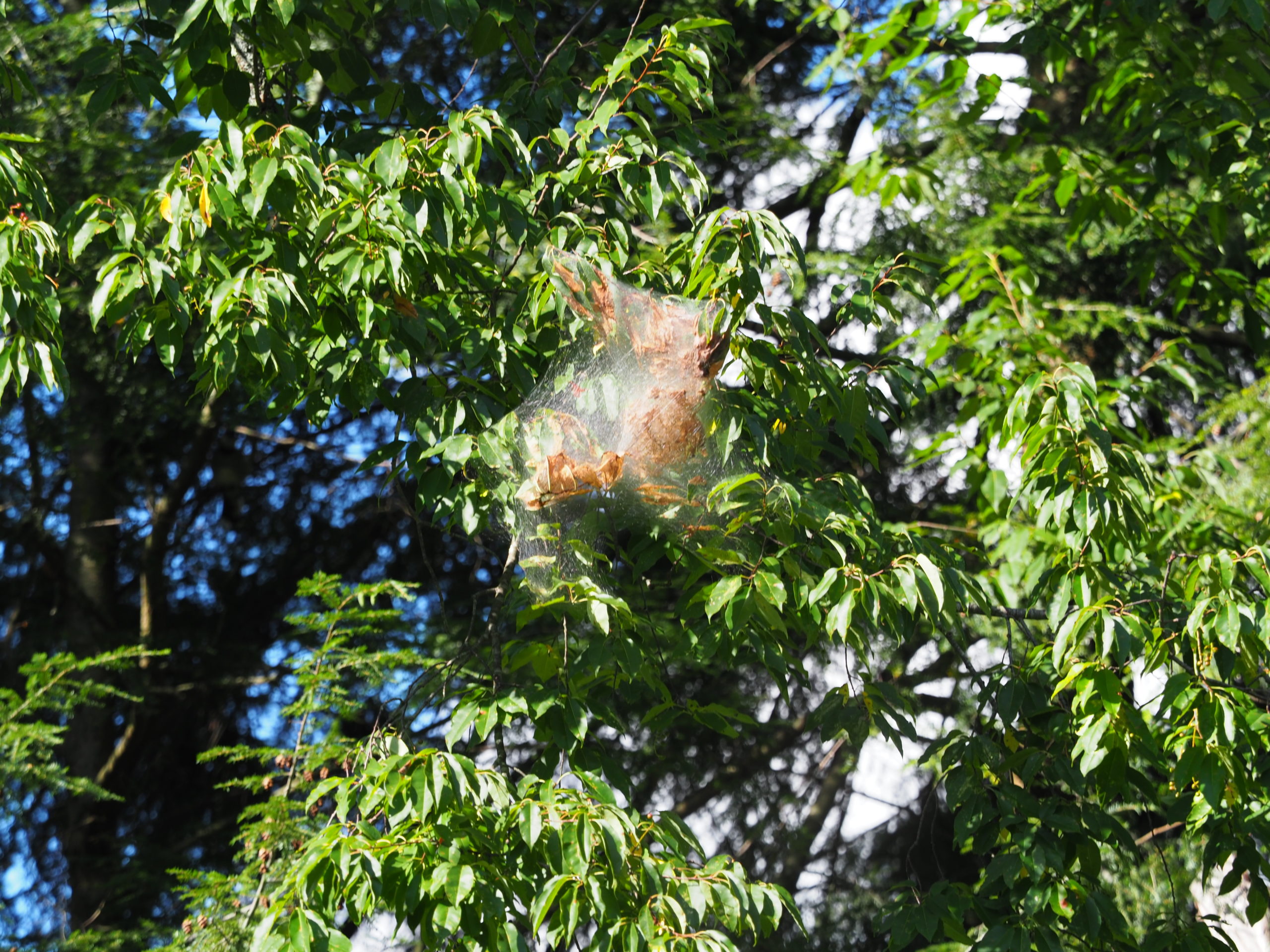 Fall webworm tent closer up. Note the only damage is to foliage within the tent. No need to spray or remove these, as they are fairly benign as insects (moths) go. ANDREW MESSINGER 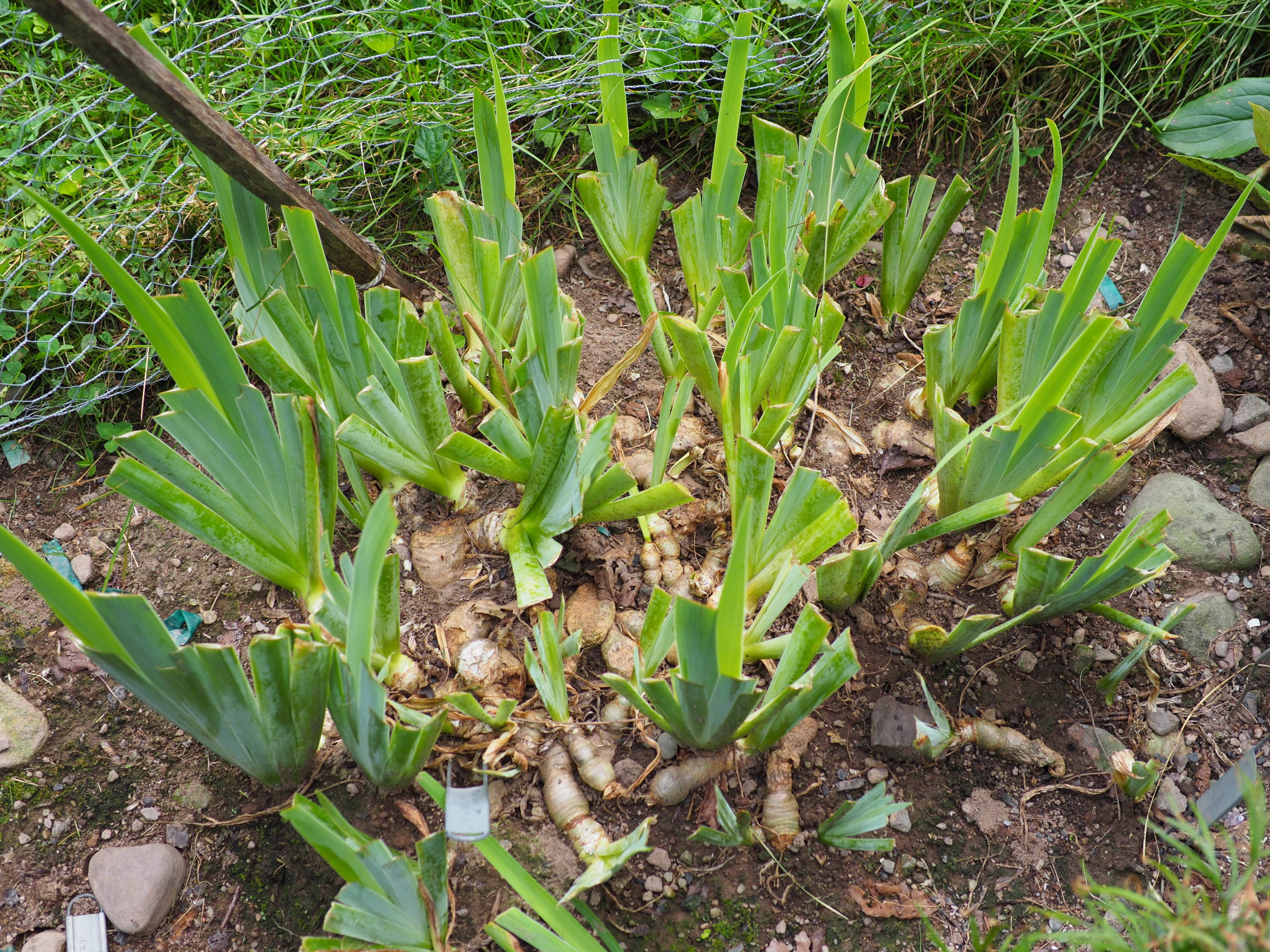 A trial bed of iris whose foliage has just been reduced to 6-inch-tall fans. Note how congested the roots are (time to transplant) and how they are only buried to half their diameter. ANDREW MESSINGER 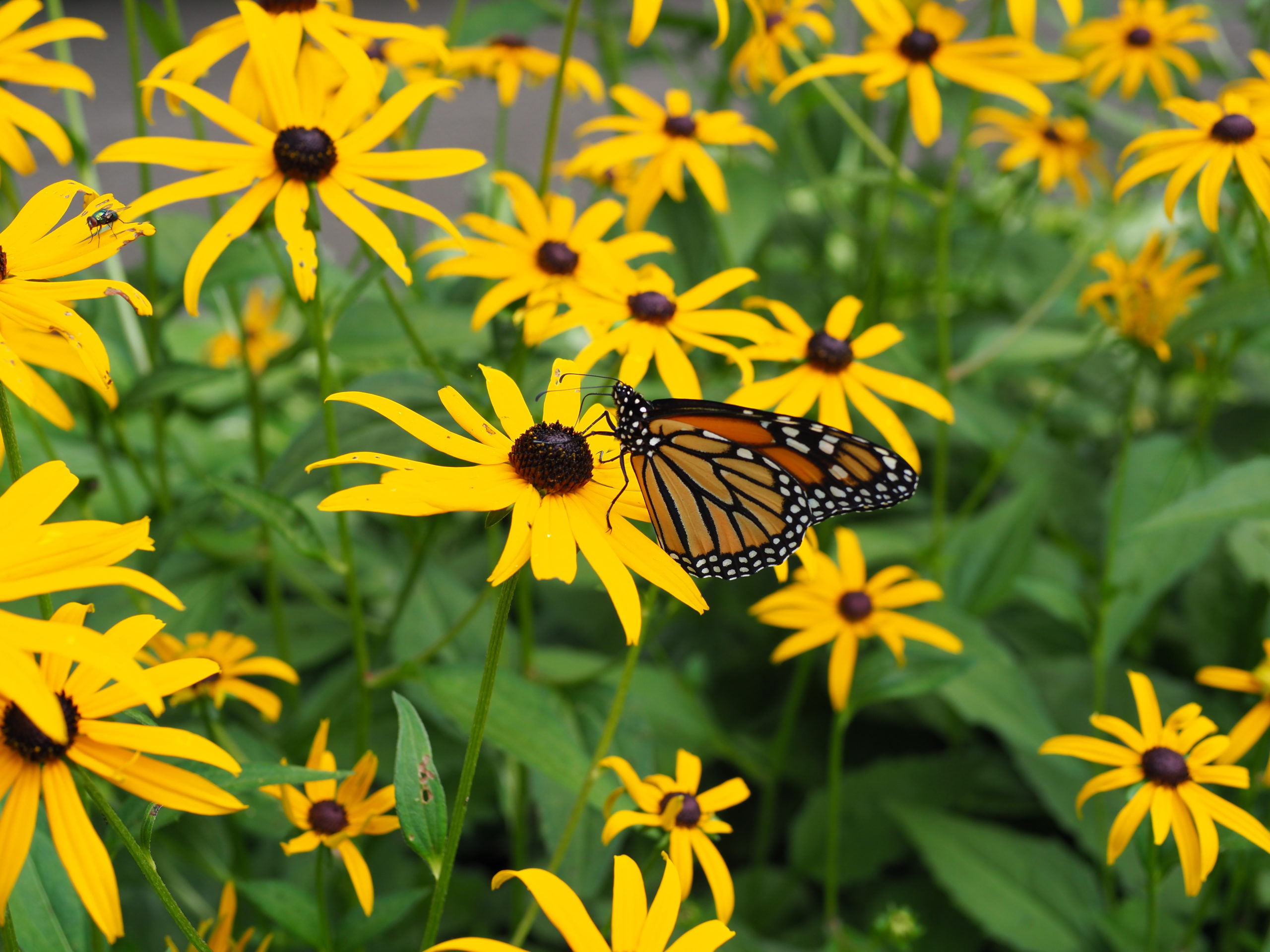 A monarch butterfly feeds on the flower cone of the late-blooming Rudbeckia ”Goldsturm.” The monarch spent three hours feeding on this 3-foot-by-6-foot block of flowers without leaving. ANDREW MESSINGER

The lack of rain this summer goes back several months, and gardeners need to be longsighted when it comes to drought. The effects of drought often don’t show up for months or a year.

There are some dramatic and some less noticeable effects of the lack of water that we can see now: brown lawns, smaller than average fruits on apple, pear, peach and plum trees that aren’t irrigated.

Widespread outbreaks of two-spotted spider mites on trees, shrubs, ornamentals and vegetables have been common as this insect thrives in hot and dry summers. Many oak trees are dropping acorns weeks and months early and the acorns are tiny compared to a normal year. This will have consequences for the deer and rodents like the white-footed mouse that feeds on the acorns. I’ve noticed that perennial Astilbes have had smaller and less vibrant flowers this summer, and my hybrid lilies haven’t performed this badly in several years.

However, there are much more subtle things going on as well. Plants that are put under continued stress — in this case a lack of water — are more susceptible to disease attacks and the lack of water in the soil means a diminution of nutrients that the roots can pick up in the soil and transmit up into the trees and shrubs. Older trees and shrubs that are highly stressed may have difficulty making it through the winter and these issues will emerge next spring and summer as they “mysteriously” leaf out in sections or not at all — or when we get dry periods next year and the plants just die.

For those with well water or living near the barrier beaches, the issue is the water table. As the freshwater table in these areas drops there can be a corresponding replacement with salt or brackish water. If this happens in your well, there are obvious problems. If it happens only in the groundwater because you wash and irrigate with municipal water, then your plant roots will get exposed to the influx of salt. And like your doctor has told you, salt is not good.

Several of you have emailed about leaves dropping early. Drought. These leaves can still be composted and turned into humus and mulch, but one question was about the leaves of the black walnut tree. Black walnuts are known to be allopathic. That is, many parts of this plant are toxic and other plants won’t grow around them or in the soil that this tree has grown in. But what about their leaves? The leaves are the least toxic part of this tree; nonetheless, I wouldn’t add them to compost or mulches as the small amount of toxicity may show up as a reaction in existing plants or future plantings.

I always try to encourage you to look up. When you’re reviewing your garden or while doing your daily or weekly monitoring to see what’s going on with what, look up. Always include your trees in your observations. If you had been doing this, some of you would have noticed large spun tents up in some of your trees. These tents tend to be about 1 to 2 feet long and about 1 foot wide. In the spring, these would have been from the eastern tent caterpillar and mostly on wild cherry trees. At this time of the year and for the next several weeks, it’s a different insect called the fall webworm.

There are some subtle differences and one critical difference. As the eastern tent caterpillars spin their webs they also venture out from this “nest” and feed on the tree foliage. This can often result in the defoliation of entire branches and, in some cases, the whole tree. On the other hand, the fall webworm only eats what’s within the tent, pupates and flies away as a moth. While the tents may look large and looming, this is really a minor insect and rarely, if ever, needs to be taken care of. The damage is limited to what you see, and it doesn’t expand. There’s also no reason to fear a mass takeover next year simply because you didn’t kill them this year. This is a good way to scout out a good arborist. If he or she tells you they must be sprayed and gotten rid of, maybe it’s time to find a new tree person?

Good time to get down the last feeding on your perennials and annuals. Remember that granular organic fertilizers are naturally released over time, and a late August feeding will last four to eight weeks. Plenty of time to finish out the growing season. Rose growers always caution about feeding roses too late as this can leave them soft and green into the late fall and winter, thus more susceptible to cold and freeze damage from early frosts and cold.

As for the lawn, wait. Keep in mind that the last date you can legally fertilize your lawn and avoid wasting fertilizer due to cold soil is on November 1. That’s a little late, though. Time your last lawn feeding for mid-September to mid-October. If your fertilizer is all organic then go for the earlier date. For now, concentrate on weed control and overseeding.

Now is the time for cutting back your iris plants and — if necessary — dividing them. Foliage can be cut back to 3 to 6 inches as the plants are somewhat dormant now, and cutting back the foliage can help reduce the spread of foliar diseases. Remember to get the removed foliage into the compost pile. If replanting, dig the roots carefully, trim off any damaged or rotted sections, try to make three fan divisions, and replant at the same depth. Too deep and they won’t flower. Next week, we’ll review dividing peonies.

Clean up, clean up, clean up. Probably the most obvious culprit for disease spread in your gardens is — YOU! If your roses had diseased foliage and you don’t get it out of the bed or garden ASAP, you are simply inviting reinfection. If you’ve had an issue with diseased tomatoes, eggplants and cucumbers, then get the infected foliage out of the garden as soon as you can. Same holds true for fruit trees. Don’t let your apple and pear foliage accumulate on the ground under the trees, and it’s probably not a great idea to run your mulching mower over them or to use a leaf blower to gather them. Rakes work really well. Keep growing.