GARDEN NOTES: Fertilizers And Pesticides Can Harm Plants In A Heat Wave - 27 East 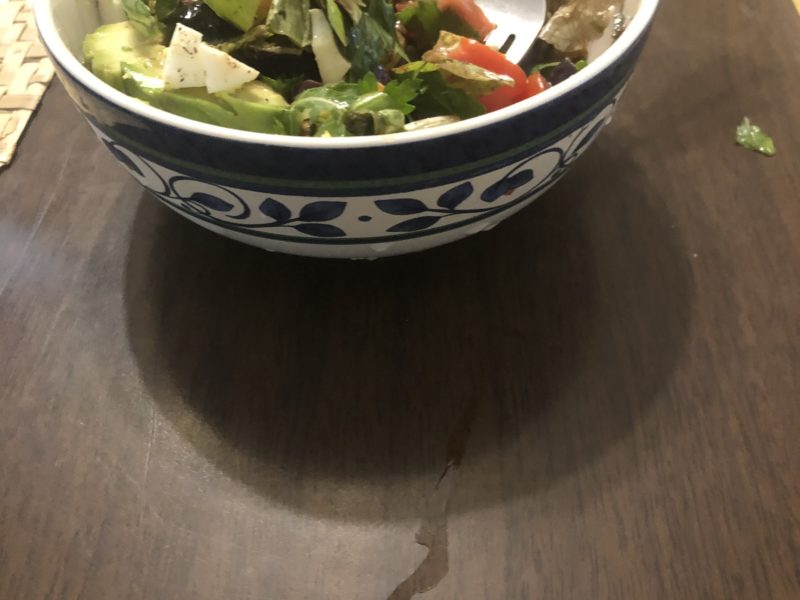 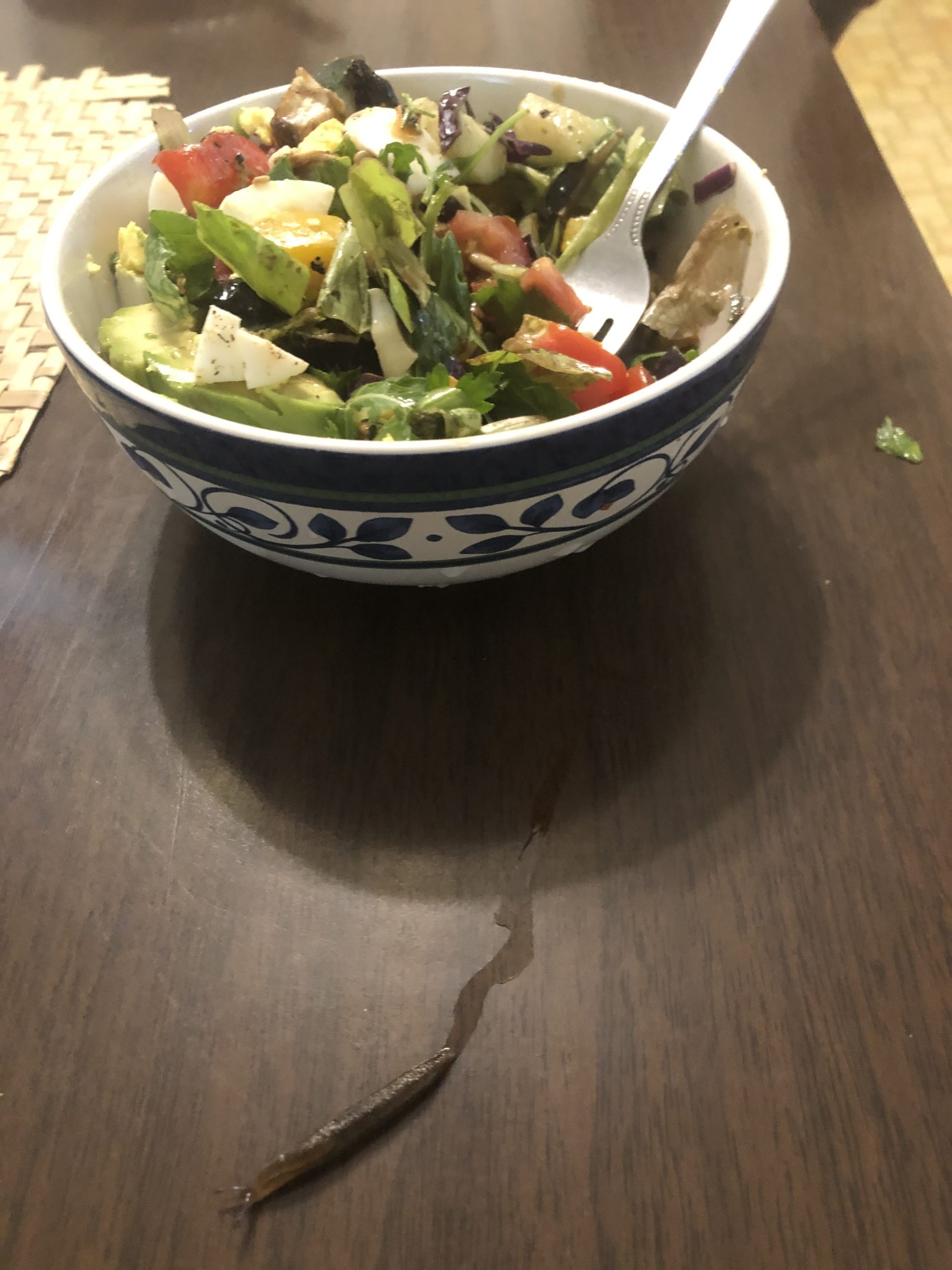 A slimy marauder slithers across the kitchen table (bottom left) after being discovered in a salad filled with greens (and slimy) from the garden. Nonetheless, the slug was 100 percent organic. 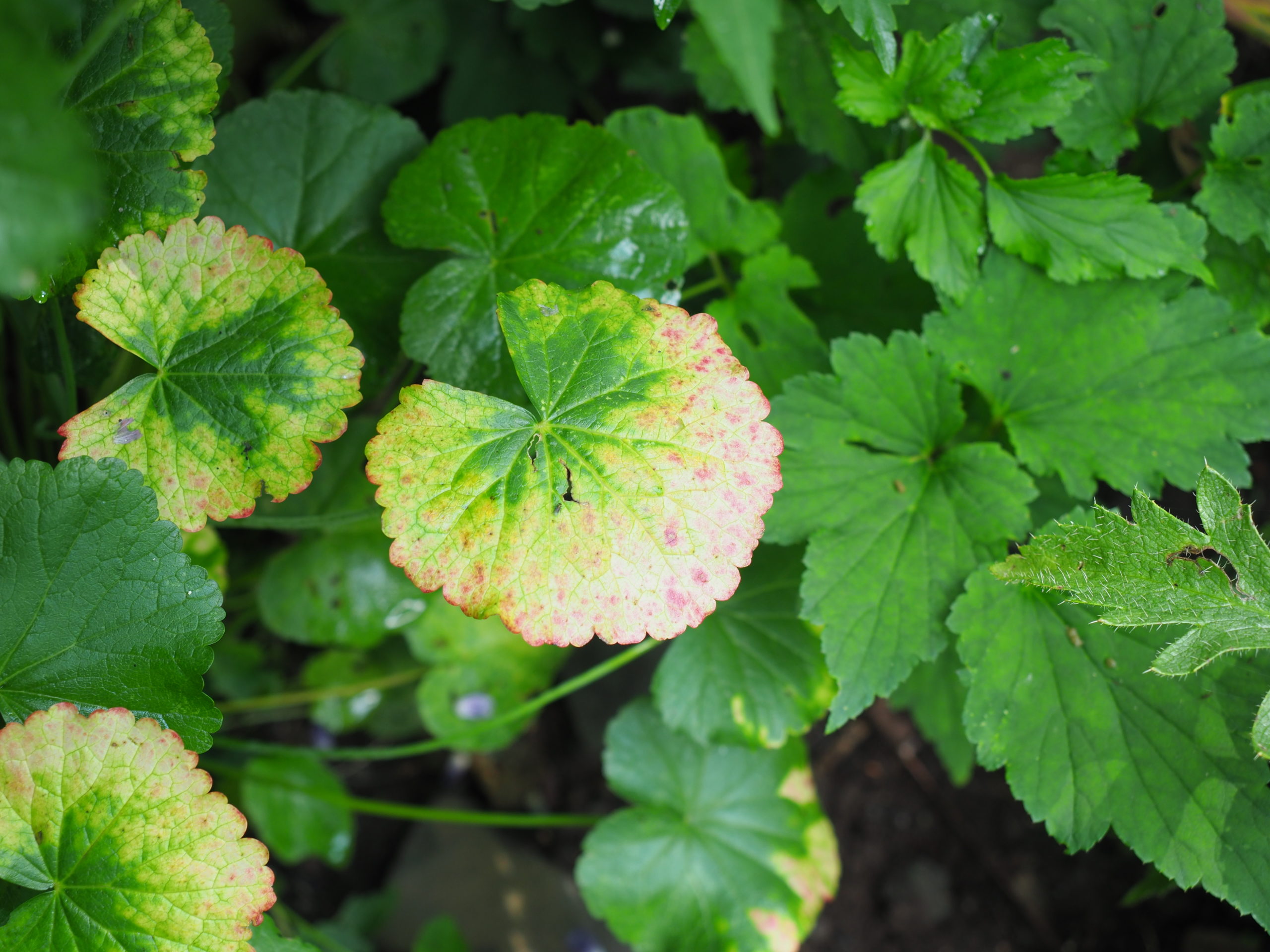 Sidalcia foliage showing signs of nutrient deficiency. A disease would probably have resulted in browning and yellowing and a virus issue would not be so symmetrical. ANDREW MESSINGER

A loud scream came from the kitchen. My wife had just made her lunch consisting of home-grown lettuces and greens with the other goodies she mixes in. The scream? As she was eating the salad a large slug appeared at the edge of the salad bowl. Oops. Homegrown, though, and 100 percent organic. I wash the greens three times before they get bagged and go into the fridge and these greens had been in there close to a week. Harvesting, washing and being on the cold side didn’t seem to work. I don’t use slug baits in the veggies. She thinks the vinegar dressing finally convinced him to try an escape.

In spite of the slug episode, this cut-and-come-again lettuce is just amazing. It’s been producing for more than 14 weeks. I thought the recent heat wave was going to do it in, and after my last cutting the two plots looked a bit ragged. But some rain and cool nights seem to be keeping the plants going and there still seems to be more to harvest. The problem is that I want to reseed for the fall crop so I may have to sacrifice one plot, plant it, then do the other.

At this point in the veggie season you may have open spaces in your garden with bare soil. These spots are a chance to get a cover crop in even if it’s only in place for a month before you turn it under. Read up on the various options as there are many from grasses and grains to legumes. One thing to be very careful of, though, is that you want to plant annual species like annual ryegrass. If you mistakenly plant perennial ryegrass it will take a year to get it out of the garden without the use of a herbicide.

A few things about herbicides and insecticides in the summer. When it’s very warm and sunny you need to be very careful with these products and fertilizers as well. Chemical-based fertilizers act very, very quickly in hot soils, and they can easily burn plant roots in the garden and lawn. This is the time to stick with slow-acting organics. There can also be toxic results when using oil- and ester-based pesticides when it gets hot out. Some become ineffective at high temperatures and others will burn foliage. Even some organics like neem oil and pyrethrin sprays can be oil based. A water-based pyrethrin will be better, but over 85 degrees and any pyrethrin spray won’t work.

Japanese beetles are out in full force. This year they seem to be coming in waves. I’ve made two applications of BTg but have realized that it’s nearly impossible to evaluate the results. More on this next year. One very important thing to remember, though, is not to use the yellow traps with pheromone (sex) attractants. There’s so much written about how these traps are not only tricky to use in terms of placement but the fact that they probably attract many more JBs to your garden than get trapped. Also keep in mind that as the day gets warmer they move to the higher points on plants. They seem to love some hibiscus species (perennial and shrub types) and nearly ignore others.

If you haven’t ordered peony and Iris roots, this is your last chance. These get shipped in August and September, and the best sell out quickly. August and September are also the ideal time for rejuvenating both of these, if they aren’t flowering, and thinning out. Iris should be done first, then the peonies.

We often think that certain plant issues are disease related when they’re actually nutritional deficiencies. I grow a variety of Sidalcia (var. Party Girl) that I really like. It’s somewhat of a substitute for hollyhock, although the plants and flowers are smaller. But Sidalcia isn’t subject to the same diseases (mostly rusts) that are common on the hollyhocks.

When weeding in the garden I noticed that some of the lower foliage on my Sidalcia was mottled with various splotches and patterns of red, orange and yellow. I sent a picture to the plant pathologist I work with and got an immediate answer: “Looks like a nutritional deficiency.” It’s really not worth the effort to correct the soil or add nutrients to correct the problem, at least not this year. But knowing it’s not a pathogen is a big relief. Nutritional deficiencies can be related to a lack of certain nutrients, which can be corrected, and an issue with soil pH, which is also easily corrected.

Do you know how to propagate your favorite garden and houseplants? This is your best chance to take cuttings of stems and, yes, even some leaves to make more of what you like. Impatiens, geraniums, coleus. You can also do cane cutting of many houseplants like Dieffenbachias and Dracaenas, but August is your last chance in this year’s growing cycle. Read up, know what to do, how to do it and what to expect. Lots of vids on the net can show you how. Also read up on “layering” as this is a propagation technique that can be used on many houseplants as well as shrubs like rhododendrons and others.

Long term weather forecasts have been outright awful this year. Nonetheless, the outlook going into the fall season is out. Fall temps are progged to be 2 degrees above normal, rainfall normal, but there is the ongoing risk of flooding from tropical systems in October. Earliest possible frost is October 31, but keep in mind there have been years when the East End, especially the South Fork, has been frost free.

Next week an interesting update on ticks and Lyme disease. Keep growing.