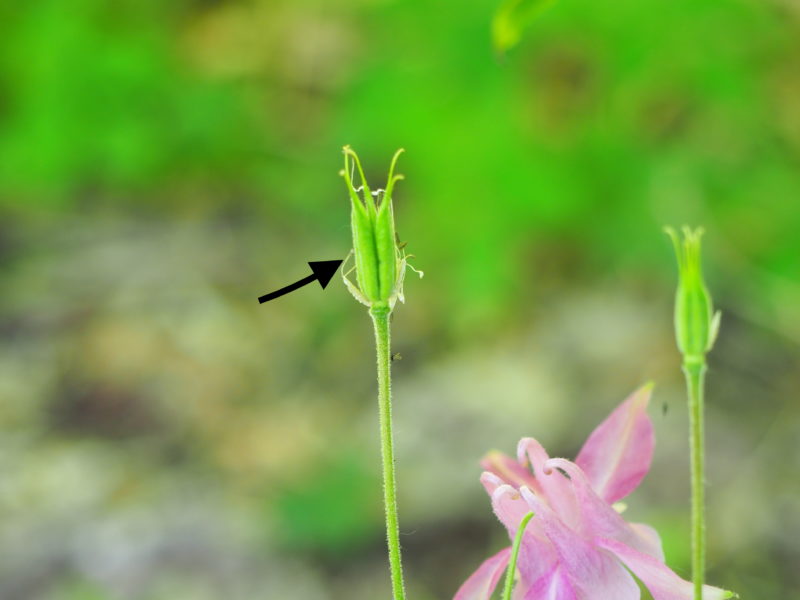 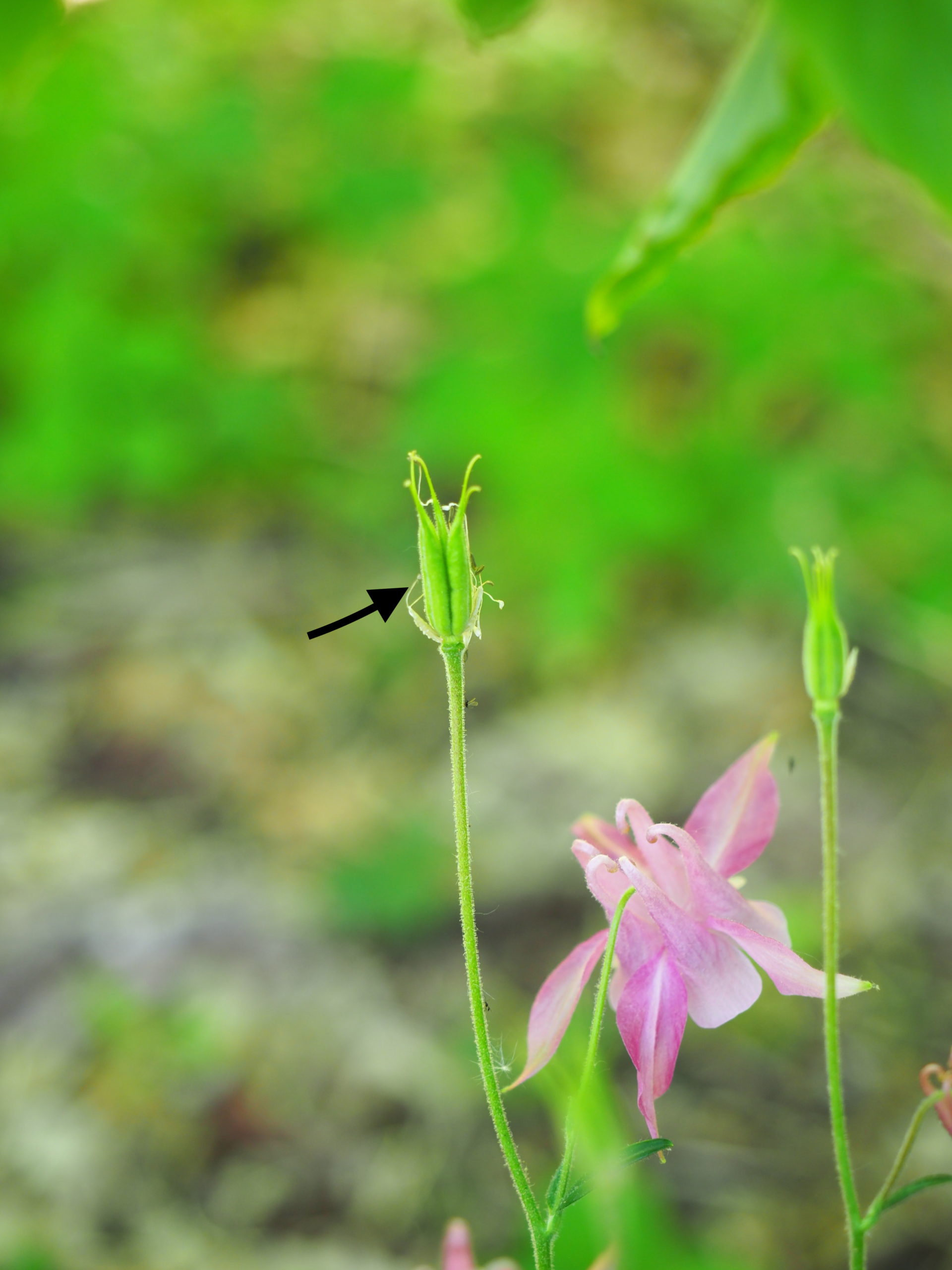 Columbines are "setting seeds" now. The seedheads, like the one at the arrow, consist of three to five compartments. As the seed ripens, the head browns and the compartments begin to open and drop seed. Seed can be collected as soon as the heads brown and begin to split open. Columbines rarely come true to seed and always offer surprises when you grow your own. 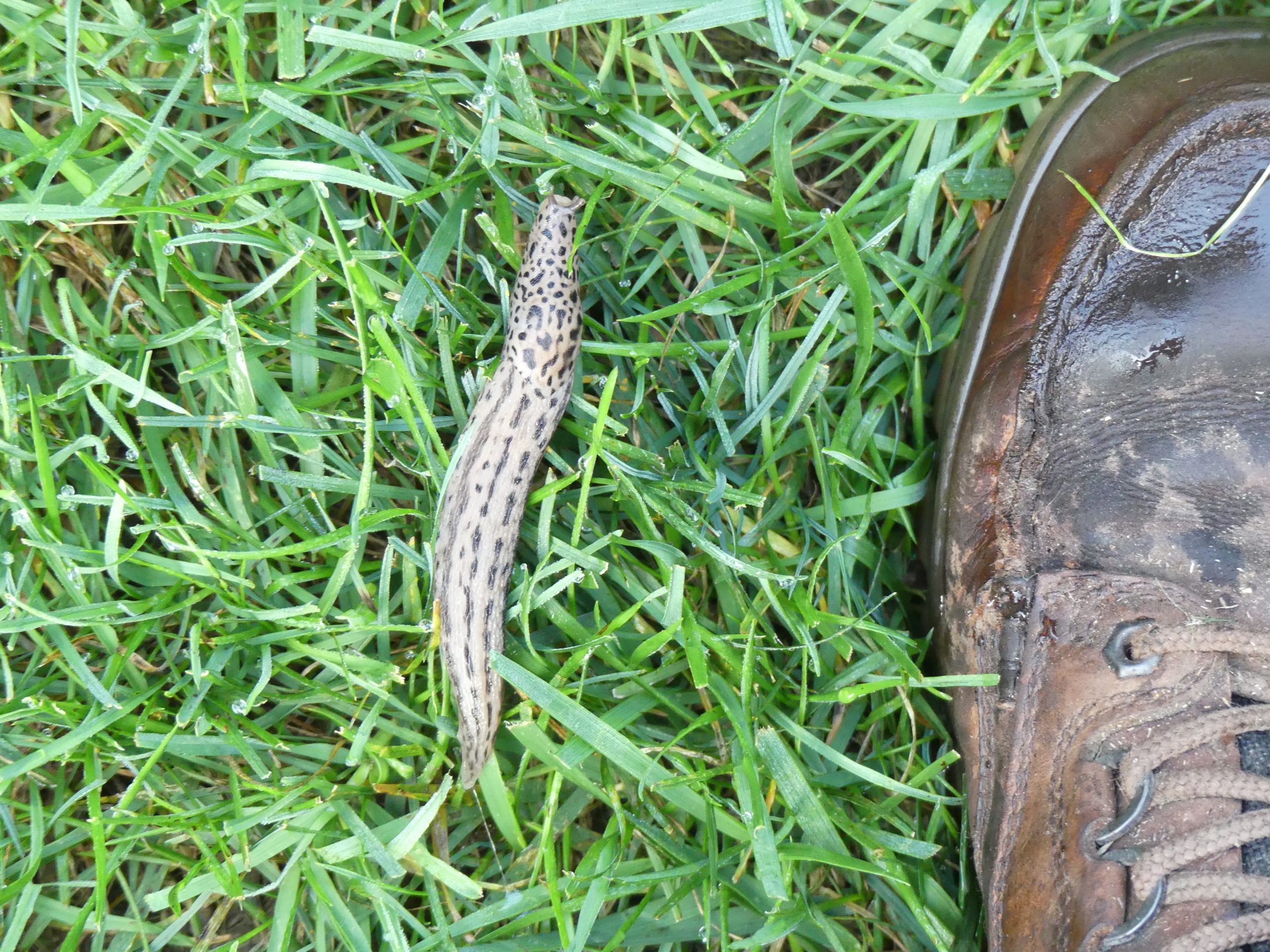 This Leopard slug, also known as the common gray slug, (Limax maximus) is one of a few species found on our lawns and in our gardens. Rarely found during the day, they seek dark and damp spots until the sun goes down. Slugs and snails are easily managed with organic, chemical and home-made remedies like coffee grounds and beer in pie plates. ANDREW MESSINGER

Please keep in mind that this is not my usual column but a substitute consisting of garden notes to help you through the season. The papers have put all paid columnists (yes, that would be me) on hiatus until the papers are on a better financial footing into the future. If you want to see the column return please let the paper know.

Yes, the slugs (and snails) are out and munching. It’s really, really important to get them under control early in the season so they don’t become a major issue later in the summer. There are effective chemical and organic controls, various strategies and combinations of strategies that work really well, but now, not in August.

And speaking of strategies, it’s also time to get ready for the Japanese and Oriental beetles. They should start to emerge in the next 10 days. They drop from the plants they are feeding on and spend the night at or in the ground. Then, as the day heats up, you will find them moving higher and higher on plants like roses and the various types of perennial and shrub hibiscus. Two organics that you may want to try are neem oil and spinosad. Neem oil will probably not kill them on contact, but if you spray your plants every week to 10 days with this product you will disrupt the beetles’ eating, it will act as a repellent and they may eventually die.

Spinosad may also deter or slow them but probably won’t kill them. Pythrin will kill them on contact and it is organic; however, when used on hot days it can damage foliage and be ineffective. Whatever you do, don’t use Japanese beetle traps. Read up on them to find out why, but read something objective not the manufacturer’s web page.

Container planting is certainly the rage, but there are a few things you need to consider for containerized plants. First, plants can easily outgrow their containers. But, planting small plants in large containers may result in them rotting. The darker the container the more heat will be absorbed and the result will be hot soil. Not good. One solution is to pot into a standard black container and “sleeve” it with a lighter color. As the season progresses the plants grow and so do their roots. This means a container that may have needed water only once a day in May could need two or three waterings later in the summer.

Most who have used water retaining beads or gels to reduce watering have regretted it. That’s especially true if we get into a rainy period where the gels tend to ooze out of the pots and get pretty disgusting.

Then there’s feeding. You can add a time-release plant food at potting such as Osmocote. Do it once and then forget about it. Otherwise, the best thing is to add a little bit of liquid organic fertilizer at each watering. A little bit. A third option is to add a granular fertilizer to the pot occasionally but how much and how often can be a challenge because this is directly related to watering or rain, temperature and plant growth. One thing you never want to do is use a straight chemical fertilizer in container plants. And liquid fertilizers, if chemical based, can easily burn foliage and roots.

Lawns should be mowed a little higher now, and as we get into late June the height should be from 2 to 3 inches tall. No fertilizer until later in the summer if you did a late spring feeding. It’s also a bit late for weed control although if you see crabgrass filling in it can be spot treated with liquid herbicide that’s intended for post-emergence use in an actively growing lawn.

Keep your eyes peeled for aphids on fruit trees, vegetables and garden plants. This is another one where if you catch them early then they don’t become a major issue later on. Aphids are not chewing insects they are sucking insects and many can transmit diseases. They are easily controlled with organics (oils and soaps) or even forceful streams of water. Only winged females fly and winged females are only present when the populations explode. Look for aphids on new flowers and flower buds (roses) as well as on the undersides of foliage (apples). Aphids will also occur on a number of vegetables and there are some that feed below ground, but these are rarer. Colors range from yellow to orange and white to black. Aphids have a classic hourglass shape and have six legs.

Columbines are going to seed. You can collect the seed by just tapping the pods as they brown and open. Let the seeds dry for a day or two in a cup or bowl then sow them in a spot where you want them to naturalize. Sow them on the soil and don’t cover them. They’ll germinate this year if left uncovered and if sown now will flower next year.

Rabbits and chipmunks continue to be a problem and fencing to keep them out of the garden still seems to be in short supply. My trial garden is well fenced and I thought that as long as I remembered to close the gate it was the safest plant place on the property. That was until I walked in one morning and, sure enough, Peter Rabbit was just sitting there. The fence is sod stapled to the ground so no clue how it got in. And, of course, it couldn’t figure out how to get out so I had to herd it to the gate opening. No visitors since.

Chipmunks are checking out every lily (no not daylily) to see if any are producing bulblets at the base of the stems. Every morning I notice their new explorations. I try to remember putting repellent as the base of each them but the collection has grown so large and the chipmunks so prolific that it’s a daunting task. I refuse to be the loser in this battle, though. If only neighbor Nancy would stop feeding them. Keep growing.