GARDEN NOTES: Let The Birds Do Your Insect Work - 27 East 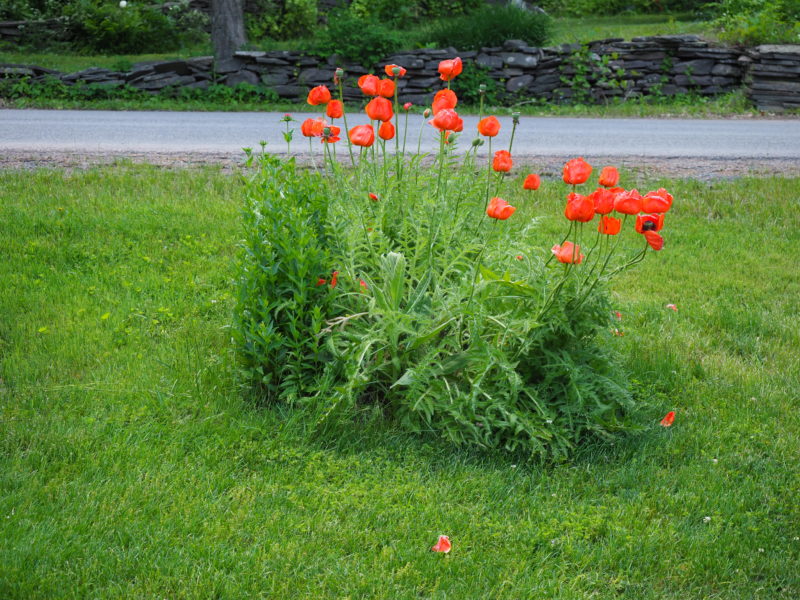 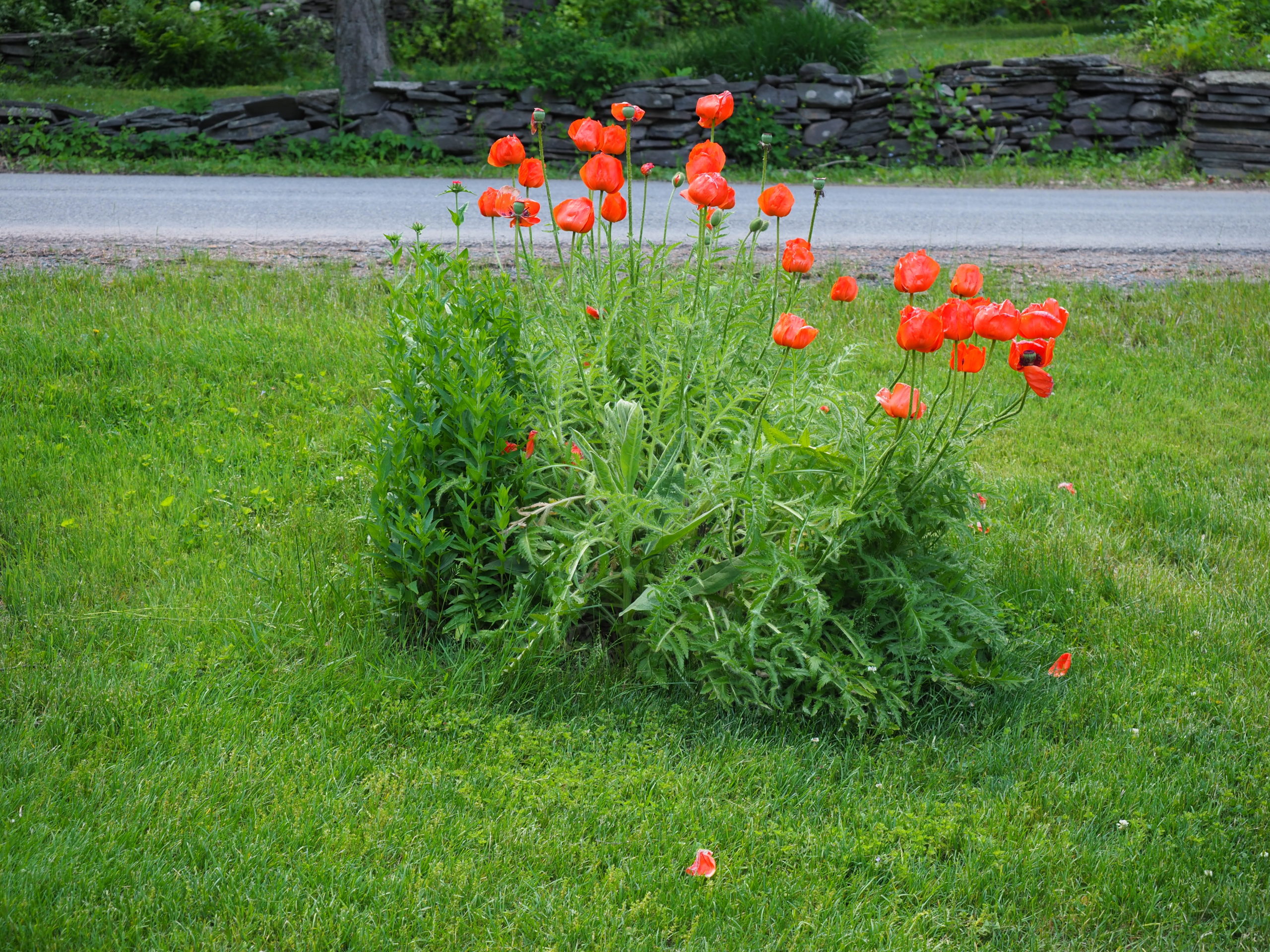 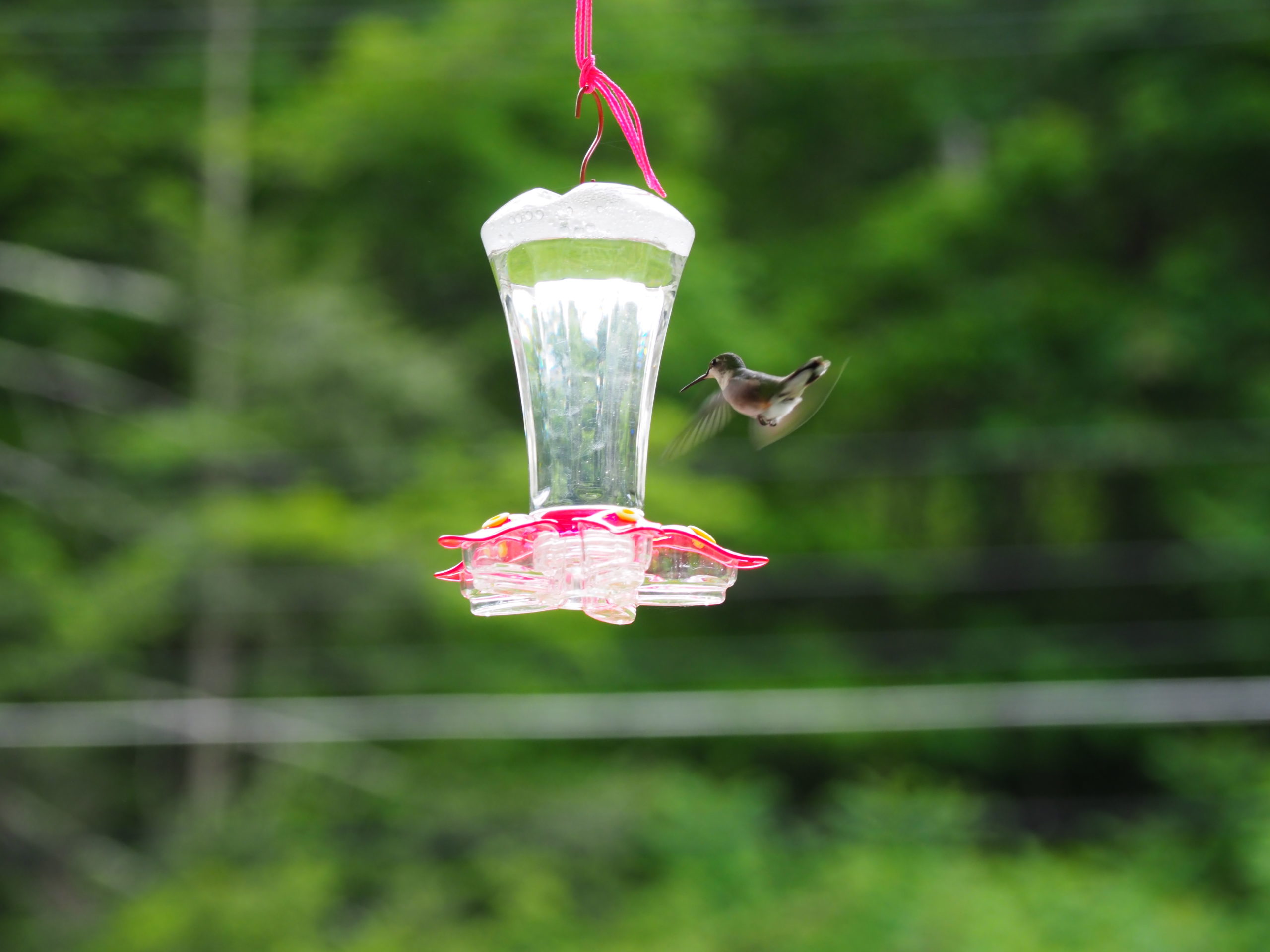 A ruby-throated hummingbird approaches a "nectar" feeder just a day after the feeder was put up. Hummingbirds are important pollinators as well as insect eaters. ANDREW MESSINGER 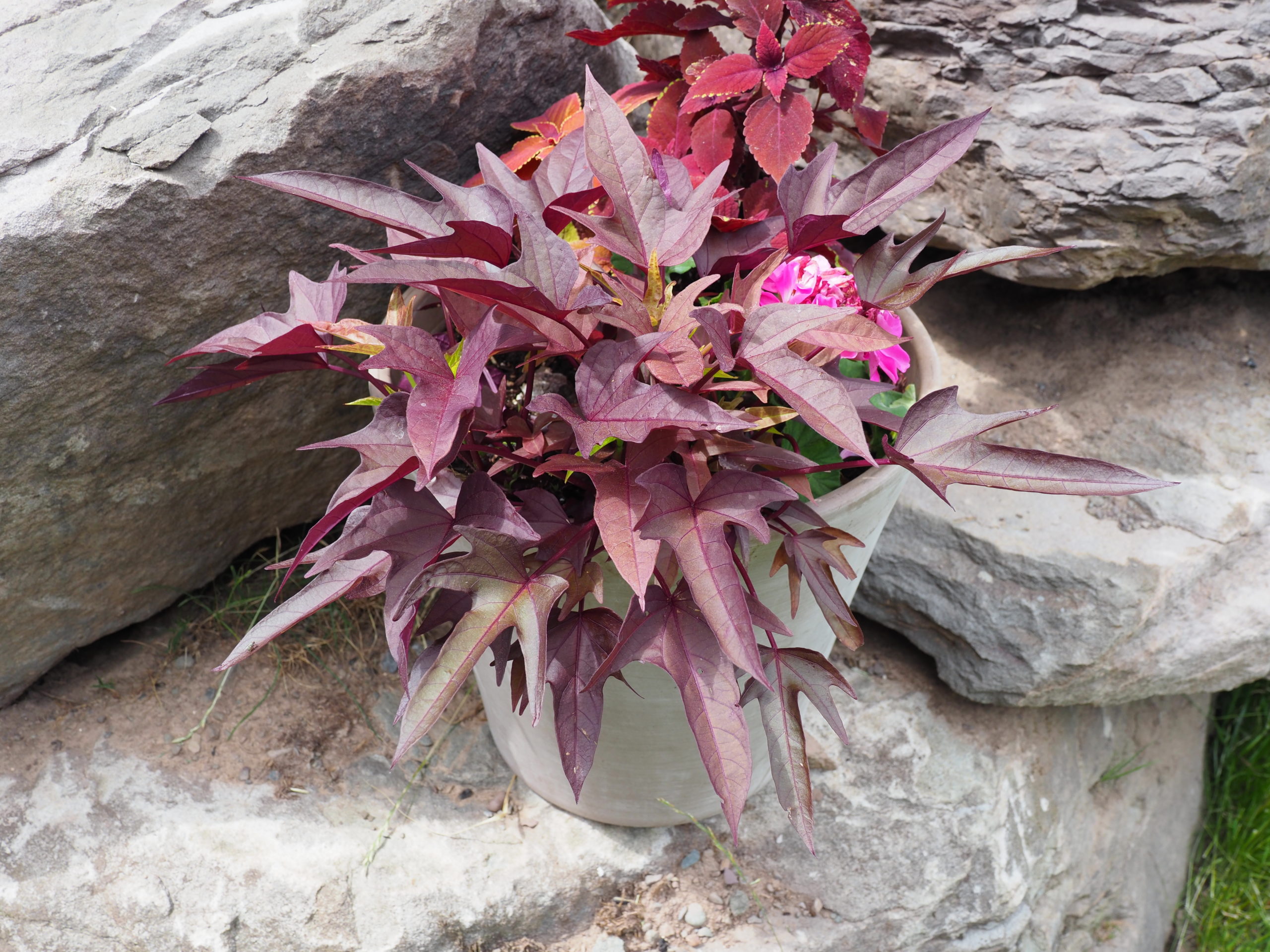 A different color sweet potato vine, "Red Hawk," just a few feet from the beetle0infected plant shows no sign of damage. The color of the foliage and the plant's different chemistry make it unattractive to the beetles just feet away. ANDREW MESSINGER 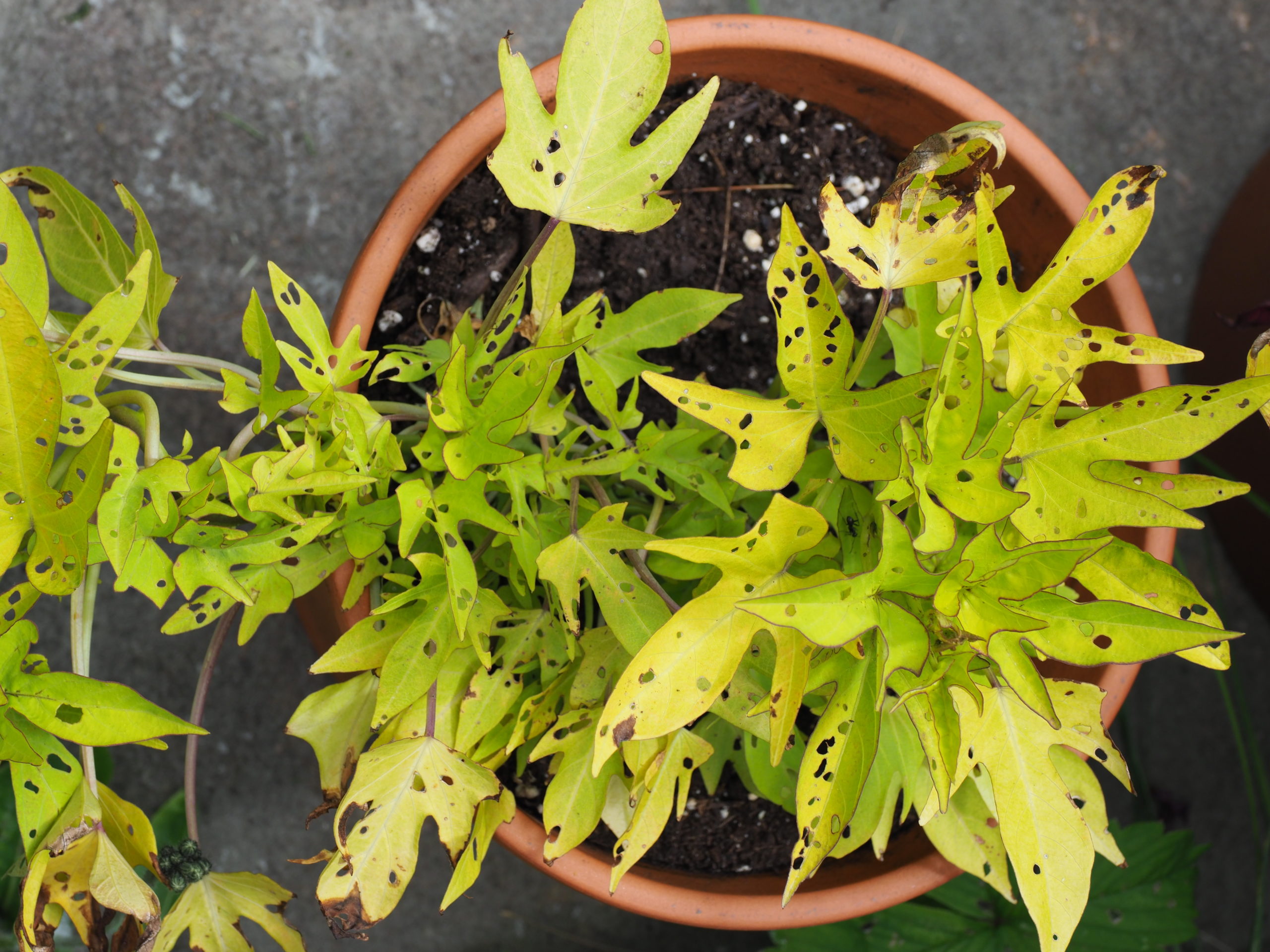 A potted ornamental sweet potato vine that’s been eaten by the golden tortoise beetle possibly with the help of some flea beetles. Both can be controlled organically but only when the beetles are active. ANDREW MESSINGER

It’s always struck me as a bit odd to be ordering spring flowering bulbs nearly a year before they flower. Yes, it does help the online or mail order retailer get their orders into their wholesalers early, and it may help hold prices down. The practice also gives you some assurance that, when you go to place your order in September, you won’t get that hated email in return saying, “Sorry, that item is sold out!”

Well, this year, there may be one other reason to order your bulbs now. It’s the same reason seeds sold out so early, and why rabbit fencing is so hard to come by.

Everyone is gardening now. Many are spending more time at home and are paying more attention to their gardens, but it’s pretty certain that, like all other horticultural sales this year, supplies will go fast.

So, this year, maybe ordering those tulips, daffodils and minor bulbs in June does make sense.

I have a few oriental poppies (Papaver orientalis) on the property and one small round bed with the variety Brilliant that flowers In late May into mid-June, then followed by Maltese Cross, and finally a late-flowering herbaceous hibiscus, all in the same 4-foot-diameter bed. The poppies are usually the last ones in the neighborhood to flower, but this year they were the first and quite spectacular.

The stand has grown quite large and could easily be divided and expanded. But with poppies you need to know exactly where they are growing, as in tagging or staking them now, as the propagation takes place in later summer, when the plants are dormant and often hard to find.

When all the foliage is brown and shriveled, you can carefully dig down to the roots, which are pencil sized. The roots can be cut into 1-inch (or longer) sections then replanted, and these will result in new poppies that will flower next year or the year after. Plant the root sections 12 inches deep, but you must maintain the polarity of the root. The top of the root section must always be at the top … pointing upward. If this is reversed, the new plants may never develop.

I feed my local birds in the winter with several feeders, but come spring the feeders get put away, as I think the birds need to feed naturally when Mother Nature supports a bountiful menu.

There are a number of plants you can include in your garden that will attract birds, and they will feed on the seeds as well as the insects that occur on the plants. Goldfinches go bonkers for the seeds from Echinacea pupurea (the species only, not the hybrids), and numerous birds will be attracted to sunflower plants as their seeds ripen later in the summer.

It’s the bugs, though, that provide a great source of protein, and several species of birds will eat caterpillars, aphids and a number of other insects.

Several summers ago, we had a pair of Baltimore orioles that discovered aphids on one of our lilacs. We watched the day long spectacle as the pair moved from the top of the shrub to the bottom, cleaning out every single aphid they could find.

There is only one trick to attracting birds to your garden, and that’s plant diversity. You can research and do planting based on what you find, but diversity is the key.

I did put out my first hummingbird feeder this year based on the amazing show I’d seen last summer at a friend’s house nearby. The feeders are inexpensive, and you can make your own “nectar” by dissolving 1 part cane sugar in 3 parts warm water. The mix doesn’t have to be boiled, and it doesn’t have to be red.

I put my feeder out on Wednesday, and the next day I was delighted by my first visitors. I’m able to stand just a few feet from the feeder and watch as they sip, and I was very surprised to hear them being quite vocal as they fed.

Keep in mind, also, that hummingbirds just don’t sip from your sugar feeder. These birds are also insect hunters — and insects actually represent a good portion of their diet.

A variety of bark types on trees will attract nuthatches throughout the year as they travel comically up and down trunks and branches looking inside every crack and crevice to find insect eggs, larvae and marauders attempting to hide in, under and around the bark.

Evergreen conifers should be considered, as well as trees like pines, eastern red cedars and others that have fruits and seed cones that a range of birds go for as well. Maple seeds are popular for some birds, as are the seeds in the catkins of the whole birch family.

Sorry to say, though, that no bird enjoys dining on Japanese beetles or rose chaffers. I have seen blue jays snatch a Japanese beetle now and then, but this seems a bit rare.

Ornamental sweet potato vines are very popular trailing over pot edges and from hanging baskets. They do have some issues, though, including slugs, flea beetles and the golden tortoise beetle.

We’ve covered slugs; flea beetles can be managed with ditomaceou earth. The golden tortoise beetle, which can be orange or golden metallic looking, if these are a big issue, you may get control with a new form of BT called BTG, or Bacillus thuringiensis galleriae. This is being sold under the trade name BeetleGone, and it may also be effective as an organic control for Japanese beetles.