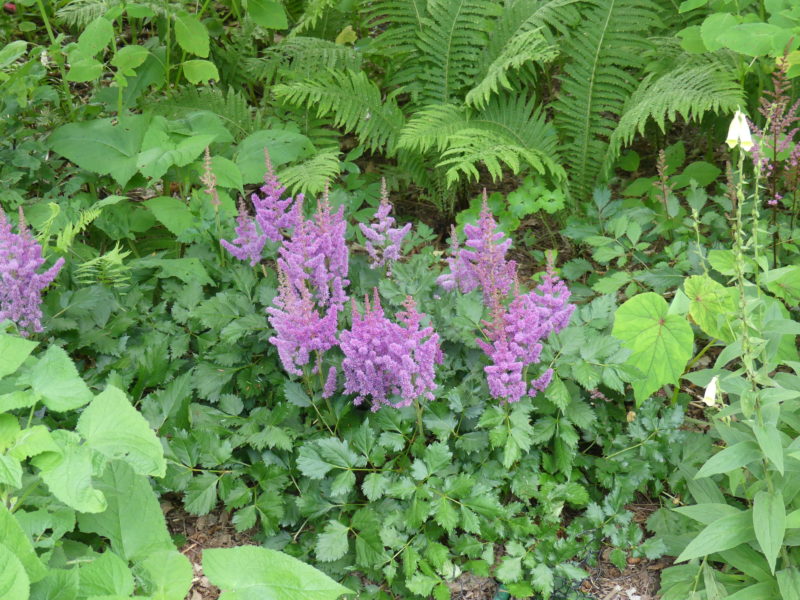 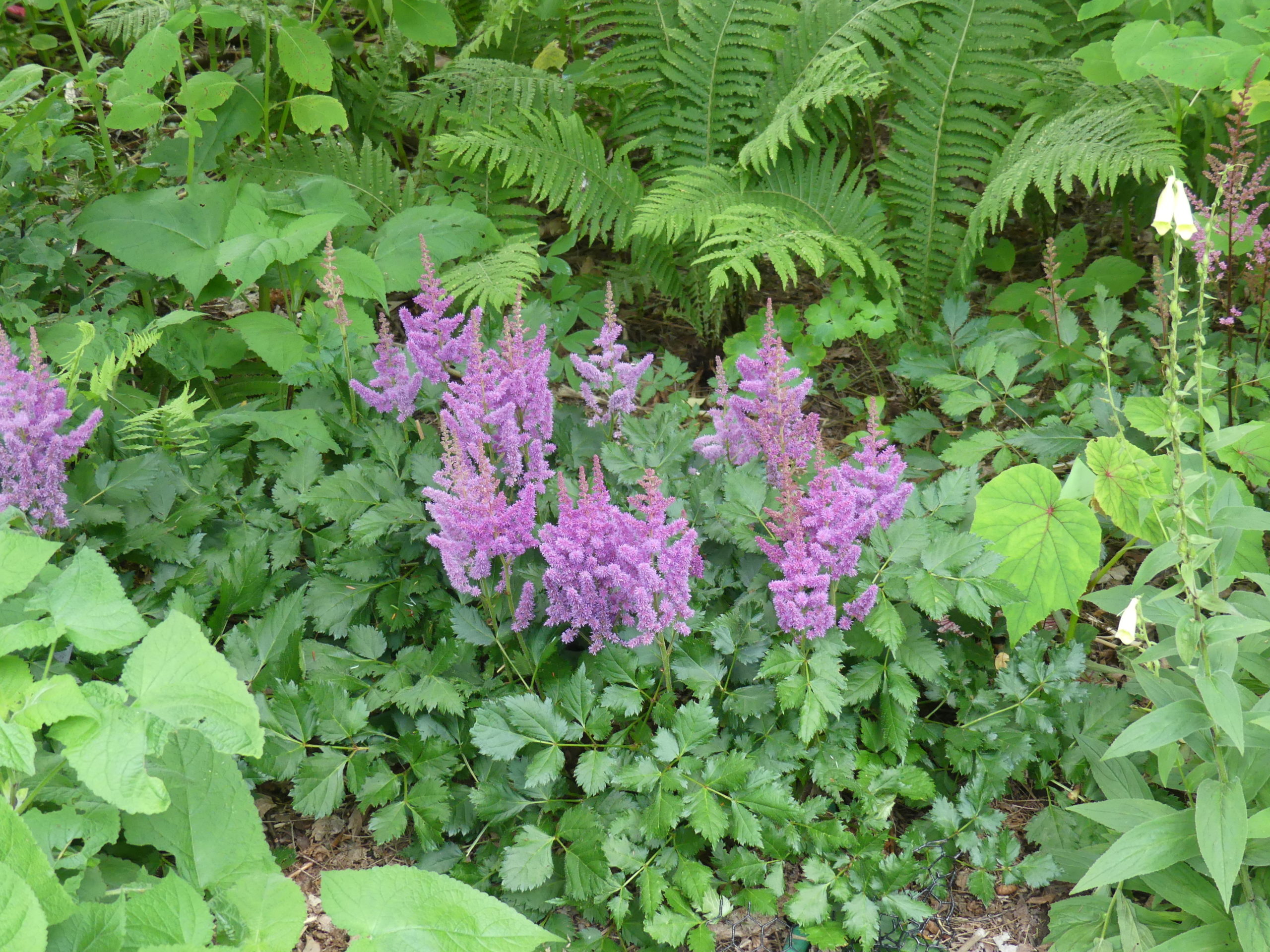 A number of Astilbes will flower late in the season.Most of the late blooming astilbes are in the species A. chinensis. Note the perennial begonia foliage (center right). These too flower in late summer. 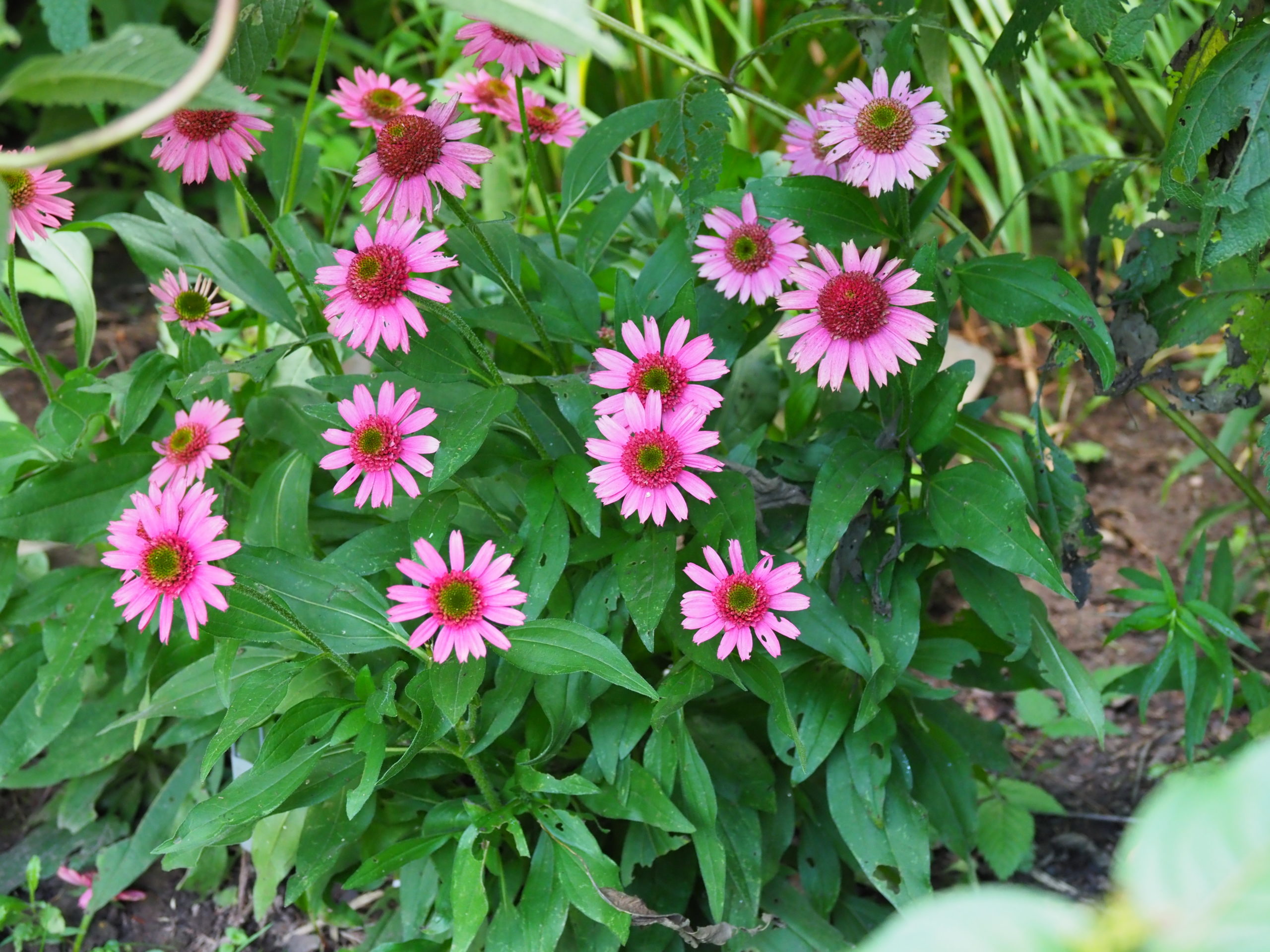 Echinacea “Delicious Candy” nearly hidden by a dwarf Joe-Pye weed casting a shadow over the plant most of the day. Undaunted, Delicious Candy remained compact with great flower color and should bloom into early fall. The rays are short, the flowers on short stems, and the plant looks magnificent late in the day. ANDREW MESSINGER 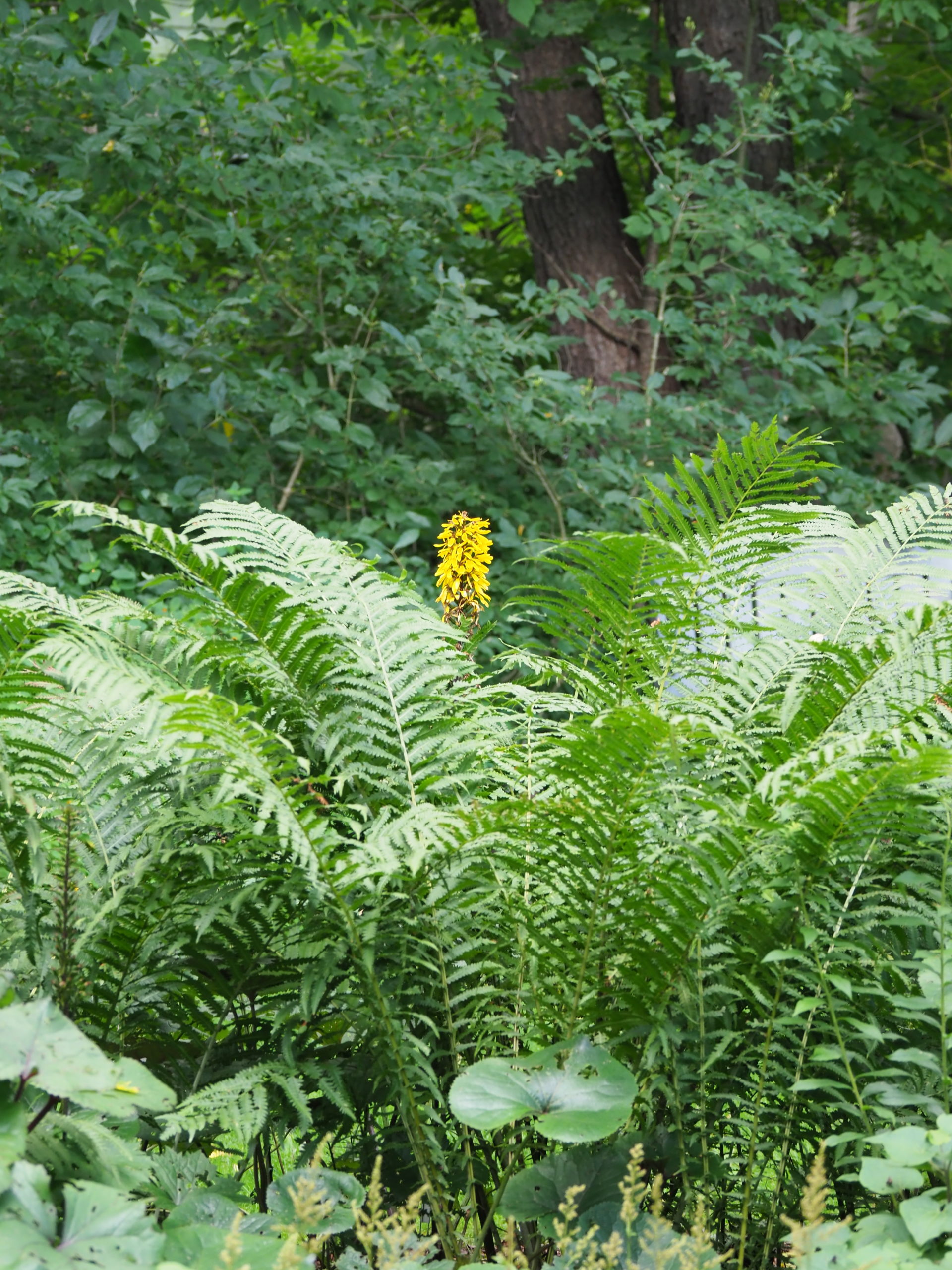 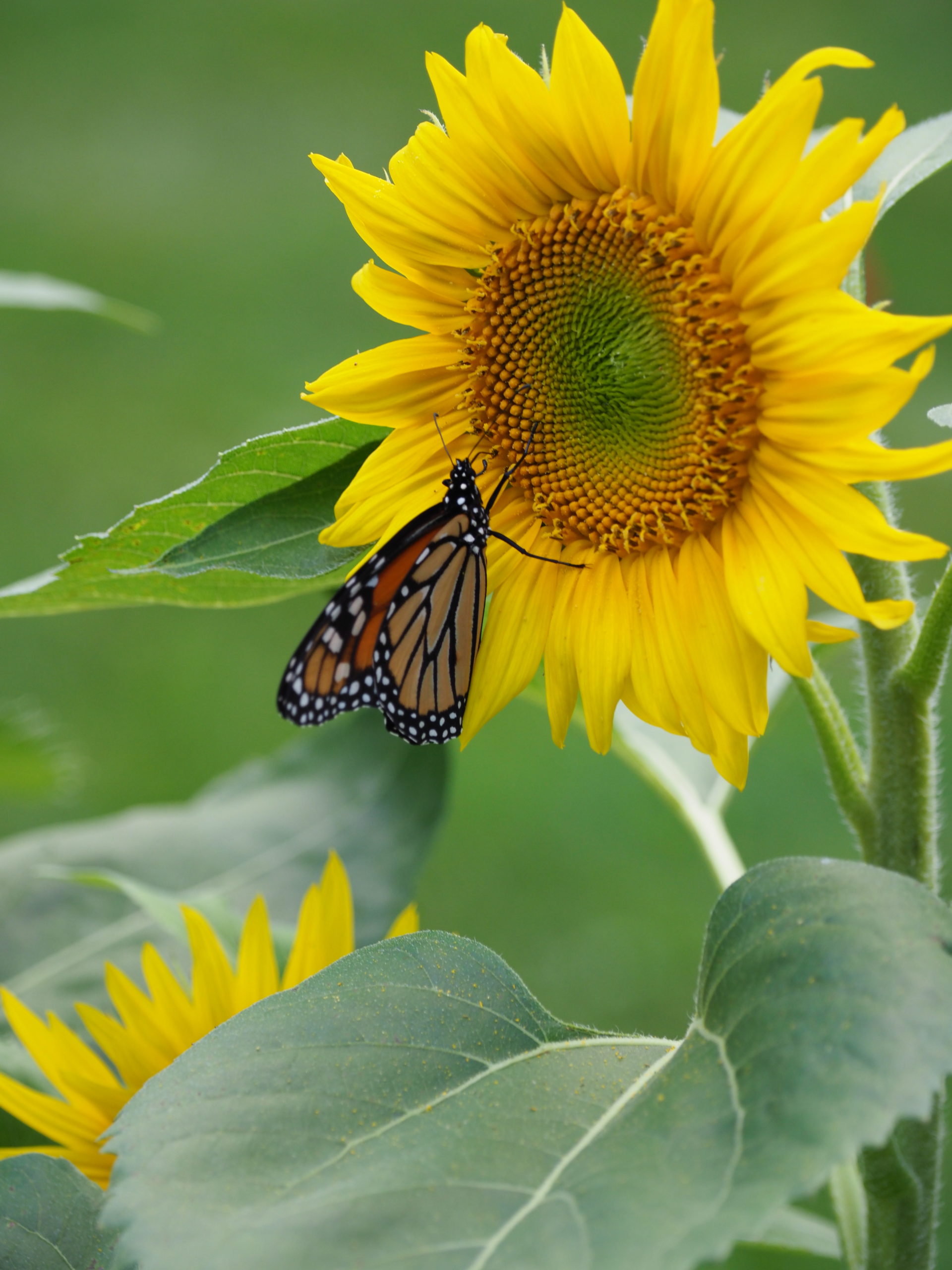 The only annual in the garden is an interloper from the neighbor's bird feeder. This is a French type of sunflower (so neighbor Nancy claims) and the Monarch seems to be enjoy the international taste. ANDREW MESSINGER 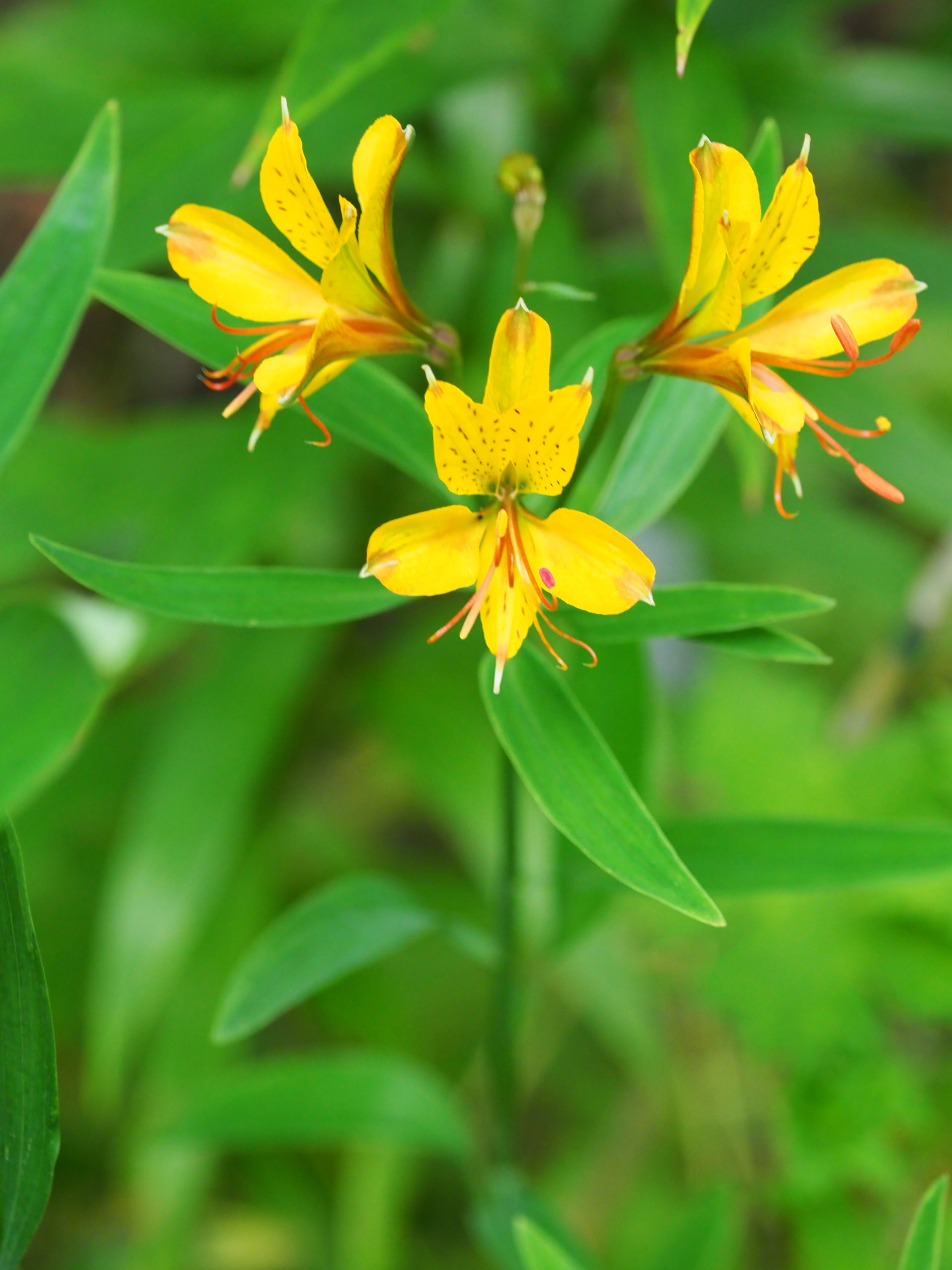 Once thought of as only a cut flower, Alstromeria can make a nice late-summer display with their long stems and small lily-like flowers. Make sure you use varieties hardy in our zone. ANDREW MESSINGER

For those of us who love to garden and have a passion for perennials, August is purported to be a challenging time in the garden. It’s the month when annuals lovers take the time to make fun of us, because they think August is the month when perennials are at their low ebb. And, to some degree, they’re right.

But we perennial lovers take August as a challenge, not a void. I have only one annual in my gardens, and that’s only because neighbor Nancy’s chipmunks have buried sunflower seeds in a number of places, and the resulting plants are now in bloom. But they are indeed annuals and plantus non grata in my garden.

So, for those of you who think August is the doldrums for perennials, here’s what’s blooming in my garden at the end of the middle week of August: 8-foot-tall Thalictrum. Two varieties of Crocosmia. Five varieties of Phlox paniculate. Four varieties of Rudbeckia, but I’m not yet convinced they are perennial.

Joe-Pye weed, both tall and dwarf. One Ligularia still in bloom and an ornamental variety of goldenrod. Four varieties of Alstroemeria and at least eight varieties of perennial geraniums. Three heucheras in flower and numerous Heuchera, Heucherella and Tiarella with stunning foliage.

There are probably more, but that’s all I can see from my front porch.

A drought of perennials in August? I don’t think so, and a talented garden designer could probably be creative and come up with dozens more.

The surprise and the winner this summer is Echinacea “Delicious Candy.” And, indeed, it does truly look like something you’d want to eat. Somehow it got planted too close to a dwarf Joe-Pye weed, and it’s nearly hidden in the somewhat shaded understory. It does get lots of light, though, and it seems to thrive here.

Unlike other Echinacea, the flower rays on this one are tight and fairly uniform. Even in this low-light situation, the plants remain fairly compact without stretching. It really should be moved to a more prominent spot, but it’s doing so well here.

Oh, what a dilemma. Maybe I’ll just buy more for next year and spread them around.

Lawns seem to be riddled with weeds this summer, and now’s the time to get them under control. If they can be managed in the next few weeks, the timing will be perfect for overseeding, renovation and filling in the spots the weeds leave behind.

My nemesis in the weed department is ground ivy, or Glechoma hederacea. It’s nearly impossible to control, but I’ve found that Fiesta (Iron HEDTA) can knock it out without the use of chemical herbicides.

The downside (actually, there are a few) is that it also knocks out the white clover and leaves the lawn with a dark, almost black cast for a few weeks. White clover is a good thing unless you must have a totally grass lawn. Nonetheless, I’ve been testing it for more than six years, and I like the long-term results. Since ground ivy spreads by its viney stems, spot control can be the easiest method for smaller properties. One gallon will treat 10,000 square feet. The other news is that the price of Fiesta has come down by 50 percent in recent years.

If this is the year you’ve got lawn renovation on your to-do list, then September is prime time. It’s also a job not to do on the cheap. If you buy cheap grass seed and don’t pay attention to what’s in the mix, you can end up regretting it for years.

Lawn seed is usually a mixture of ryegrasses, fescues and bluegrasses. Each has its benefits and shortcomings, so you need to know what you want your lawn to look like and feel like. Then you need to consider how much time and money you want to spend on maintenance, like feeding, weeding, watering and disease control.

The trick is to find the right seed mix that will give you a lawn that requires as little input as possible. It needs to be disease resistant, insect resistant and tolerant of minimal watering. This, my friends, means you have to do your homework.

You can get lots of information online from Cornell Cooperative Extension, including recommended varieties. These change quite regularly as older varieties are replaced by new ones that promise better outcomes. Many garden centers also sell their “house blends,” which they have formulated for the East End.

If you have your gardener or landscaper doing the work, ask for a copy of the seed label so you know what you’re getting. He or she can tell you it’s a premium blend, but he won’t tell you he got it at Home Depot. Look at the label and see what the percentage of “inert” material is and the percentage of weed seed. Both should be as low as possible.

There’s a great guide to grass seed labels here, https://bit.ly/3fIfrrw, that will make life a bit simpler, and it should be required reading for homeowners.

Whatever you do, don’t be sucked into mail order and internet offers for grass seed that requires no maintenance and that you can’t buy locally. Many, if not most of them, are little more than mixes that are totally inappropriate for use out here.

And beware of Zoysia. If you find Zoysia tempting, find a Zoysia lawn locally. Look at it, walk on it and after you do remember that it browns (goes dormant) very early and greens up very late. While it is hardy here, it’s still considered a Southern grass.

By the way — my lawn looks great at night.

A few thoughts on hurricanes.

Because the storm two weeks ago went inland south of us, we were on the dry side, but the windy side. This can happen with any hurricane that comes up the coast and then curves or moves inland anywhere from the Moriches south.

Dry hurricanes bring us high winds and also carry salt spray from the ocean inland but little to no rain. In some storms, the salt spray can be airborne for a mile or more, and the result is burning or desiccation of lawns, trees and shrubs.

Most, if not all, will recover — but strange things happen. Shade trees and fruit trees get defoliated, then in a couple of weeks they leaf out again. This puts a great deal of stress on the plants. The desiccation can also cause fruit trees to re-flower in the fall, as late as Thanksgiving. No, that’s not a good thing.

Salt in soil can be mitigated with gypsum if you are flooded. Salt on trees and shrubs can and should be washed off, but the bulk of the damage has already been done. Hydrangeas used in the landscape along the barrier beach homes and estates don’t like salt in their root zones and often die the following winter.

Not great news, but with the number of storms forecast for this season you should be aware of what can happen. It’s one of the prices to be paid for living a hundred miles out into the ocean.