GARDEN NOTES: Prepare This Fall For Next Spring - 27 East 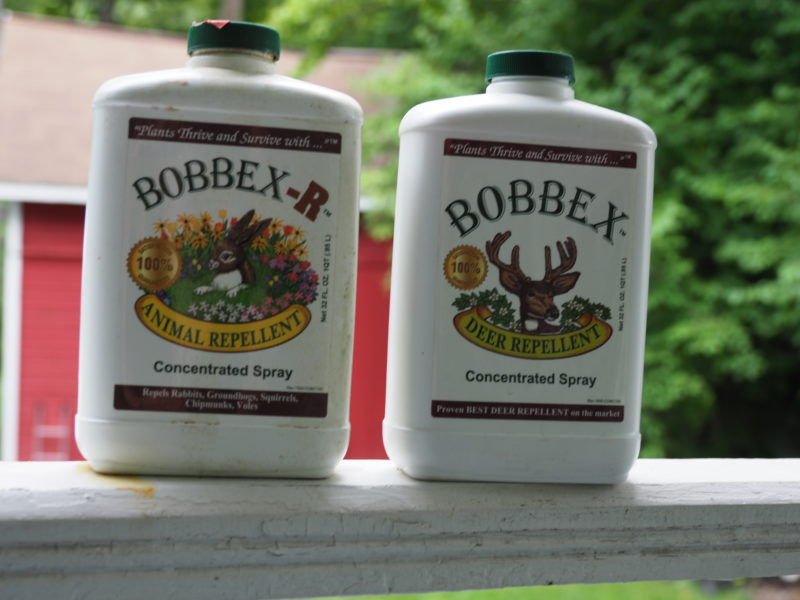 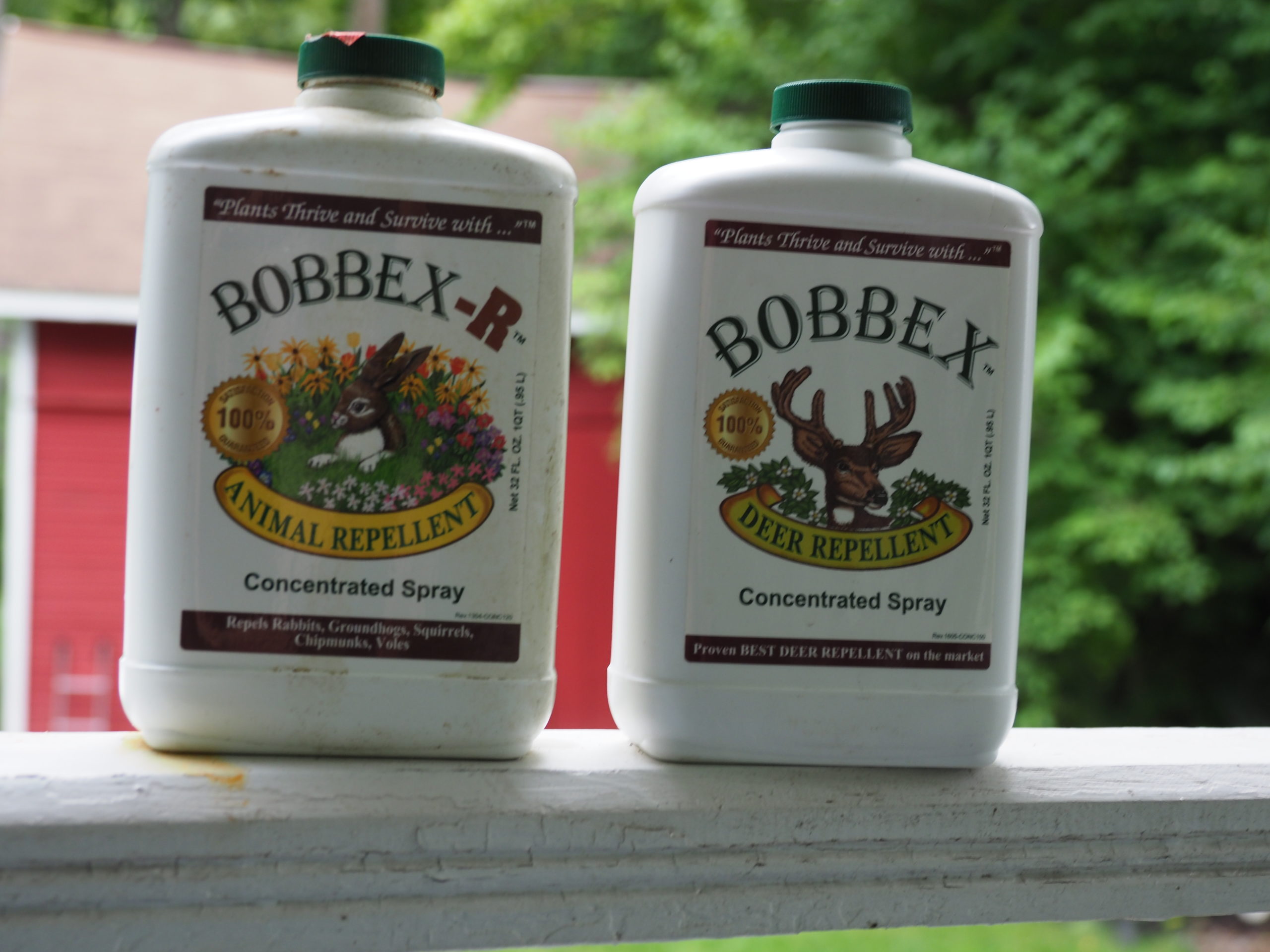 Only Bobbex-R (left) will work as a bulb dip to repel deer, mice, voles and squirrels. The dip only lasts for the first year, but in following years Bobbex-R can be used as a soil drench. The Bobbex on the right, the standard Bobbex, does not have the same repellency. 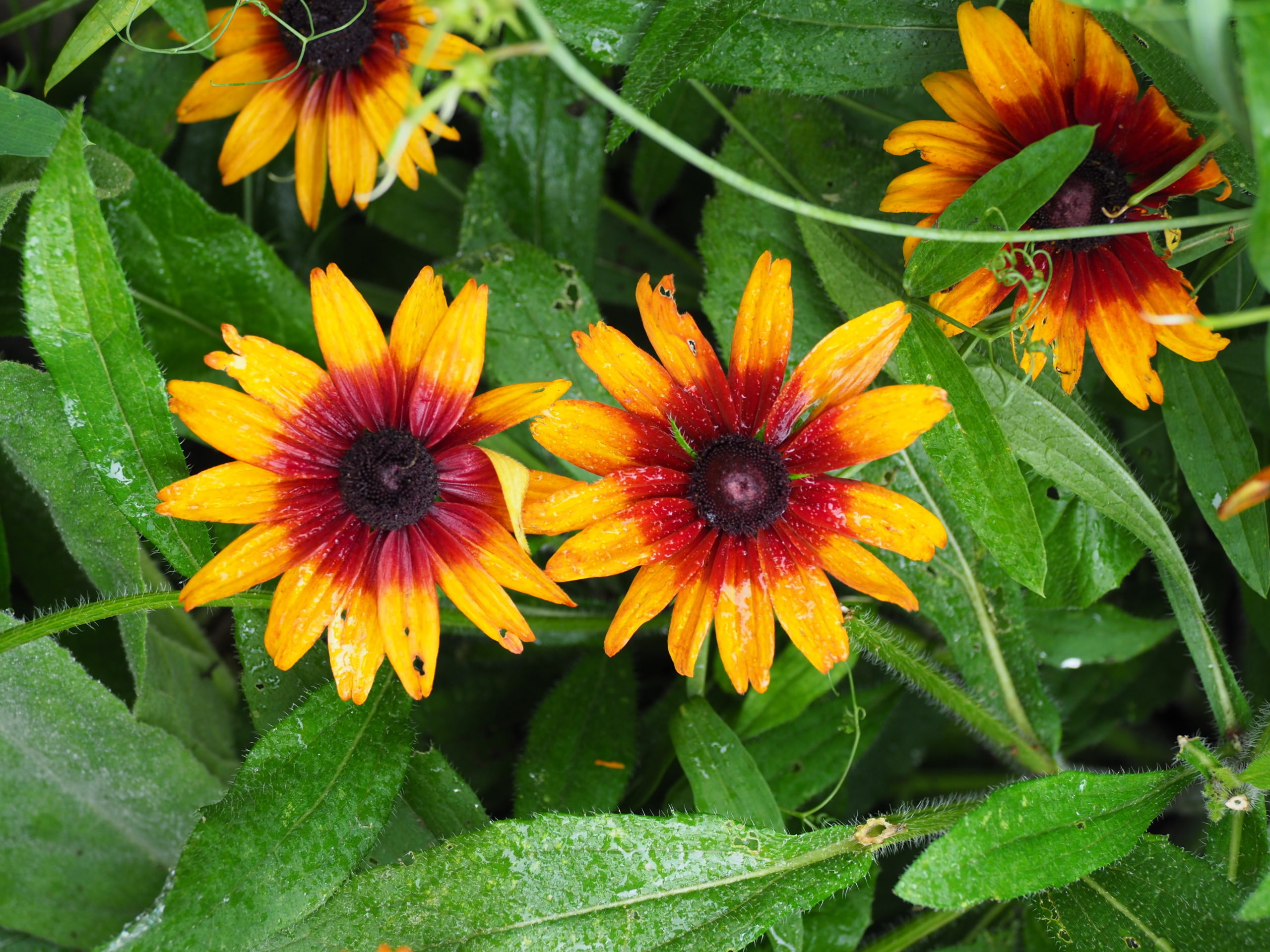 Many Rudbeckias put on a great fall show, but this variety, Cappuccino, flowers all summer and into the fall. The mature plant is about 2 feet wide with flowers on 10-to-15-inch stems. Also great for cuts. ANDREW MESSINGER 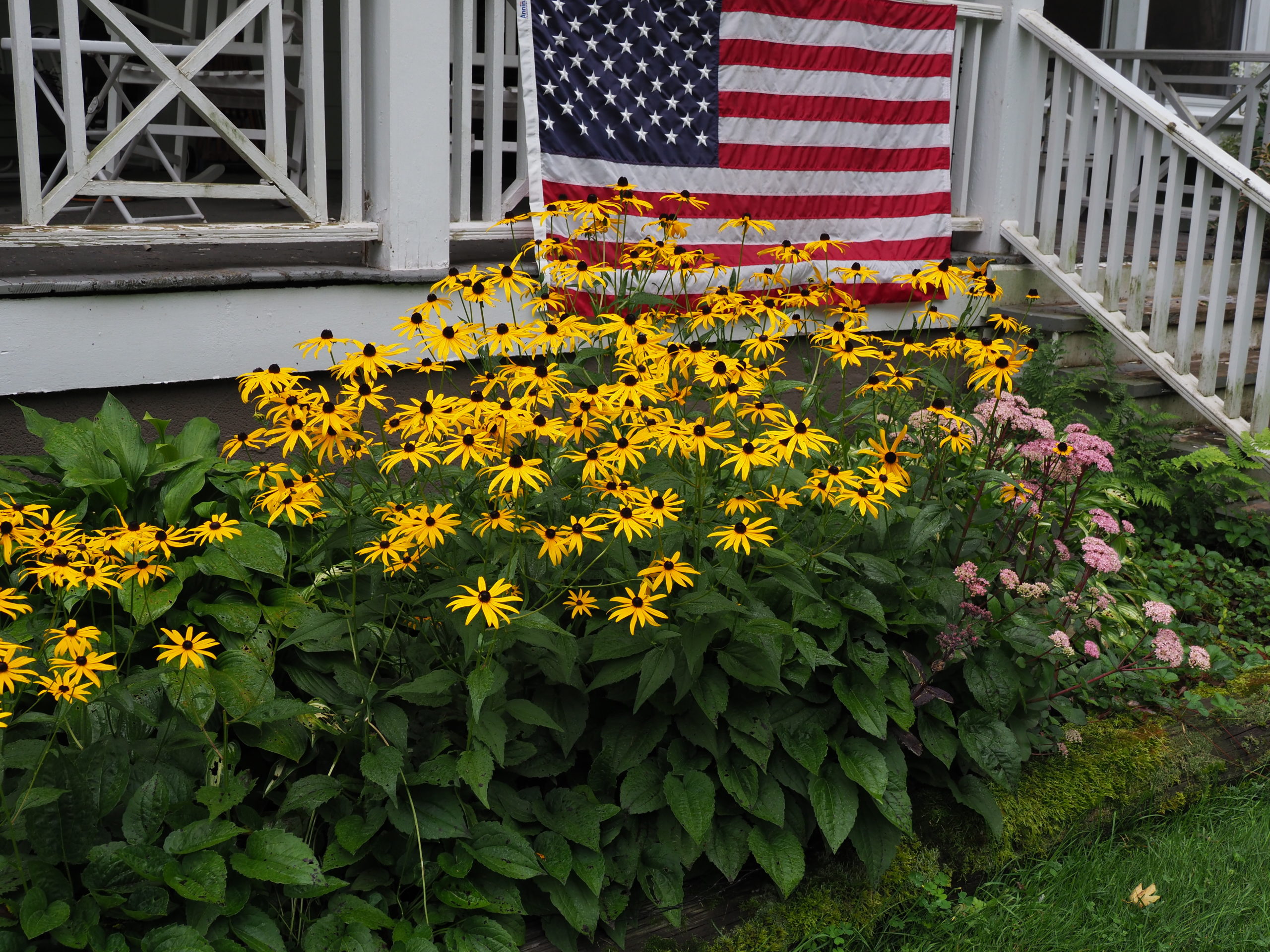 Rudbeckia fulgida var. Goldsturm is a late-summer bloomer that extends into the fall. It’s a classic Rudbeckia and popular with landscapers. Heights can range from 15 inches to 2 feet tall (note the shorter plants on the left). Divisions are best for height uniformity, so if that’s your goal avoid plants grown from seed. Easily divided every 3 years in the spring as it emerges. ANDREW MESSINGER 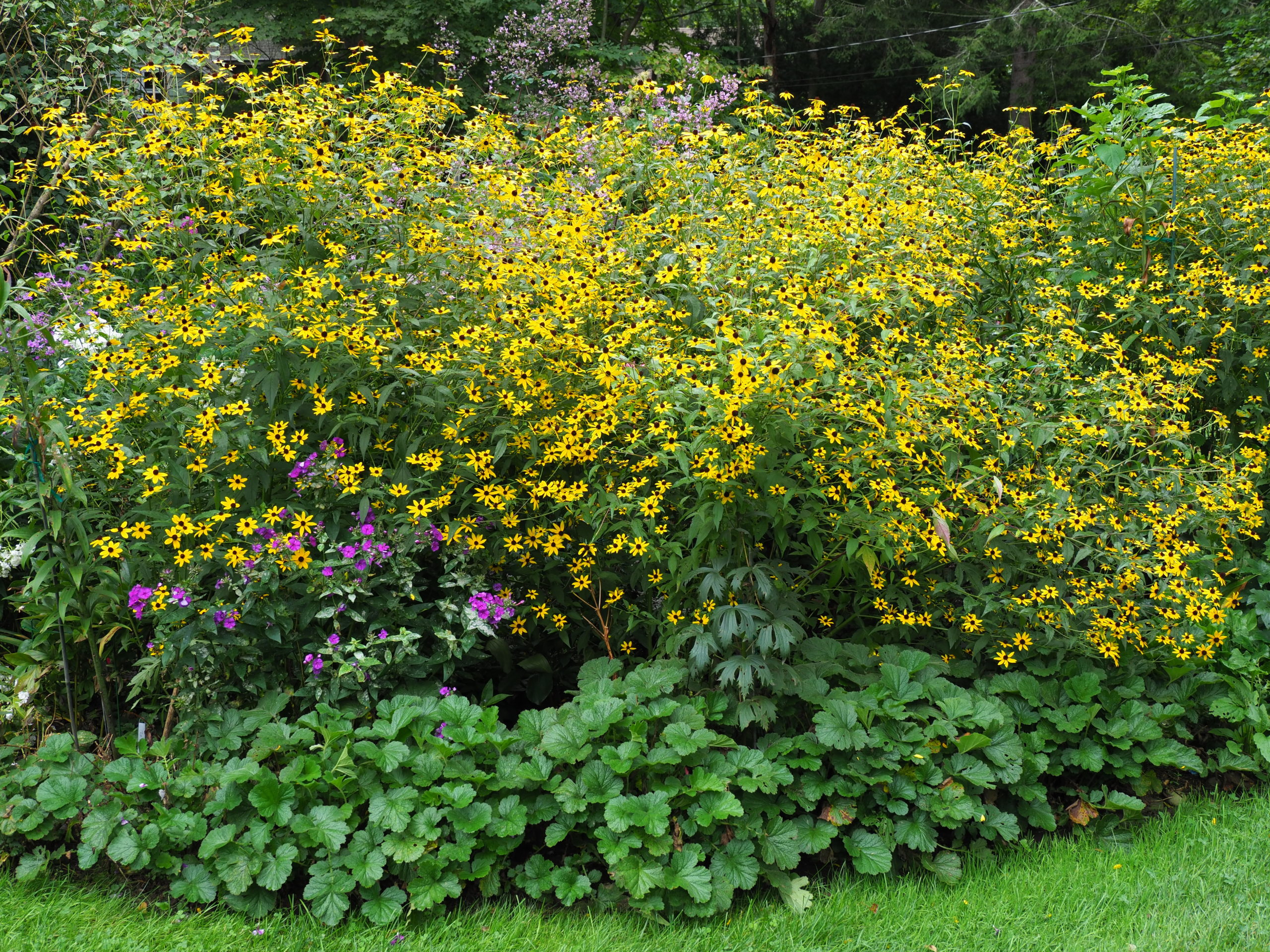 Rudbeckia triloba is a short-lived perennial, but it does self-seed and seedlings will bloom the first year. This one is 6 to 8 feet tall, but others are shorter and a variety called Prairie Glow grows only to 2 feet and has brown rays unlike these yellow ones. As the plant goes to seed in late summer and into the fall, birds like goldfinches gather to feed on the seed heads. I let it self-seed then in the spring thin out the seedlings where I want the plants to fill in. ANDREW MESSINGER

There are some subtle and not so subtle changes going on in the gardens that tell us that the seasons are changing.

The dominant colors are switching to the yellows of Rudbeckias and Solidagos, and the nights are cooling, which our lawns love as they green up once again. My hummingbird feeder has become very busy, but all my males, including Alpha, who guarded the feeder since May, are now departed for points south. Tinkerbell, the curious female hummer who would often float in the air just inches from my face, is still around. Not for long, though.

Your spring bulbs that are fall-planted should either be ordered by now or you should begin to peruse local garden centers to see what they are offering. Too early to be planting these, but shop early as I’m sure there will be a run. Locally purchased bulbs can go into a cool, dry and dark place until they are planted in three to six weeks. Don’t waste your money on bulb food. There’s little to no evidence that fertilizing spring bulbs at planting time is helpful.

You will need a good repellent, though, if deer, squirrels and chipmunks are a problem. They will dig and eat just about every bulb with the exception of daffodils, Alliums and Fritillarias. Get yourself some Bobbex-R and either dunk or spray your bulbs with it, let them dry, then plant. Only the R formulation will work, and it will only work for the first year. After that, granular repellents may be needed or soil drenches of Bobbex-R in mid to late September. Bobbex-R may be hard to find, but your local garden center can order it and you can get it on Amazon. Don’t dilute it when used as a dip or drench.

Two things seem to be a common thread in the emails I’m getting. One is powdery mildew, and the second is the autumn-flowering Clematis (Clematis terniflora). Powdery mildew goes rampant in humid summers or where there’s overhead irrigation. It can show up on a number of plants and vegetables, but it is host specific. This means that powdery mildew that shows up on your vegetables can’t and won’t spread to your roses or tall garden phlox. Yes, it can be on both at the same time but only because the environmental conditions were hospitable on both plants. There are both organic and chemical controls that can be very effective, but it’s a bit late for that.

If you know you’ve got a powdery mildew problem, the thing to do now is to keep the garden(s) clean of foliage that has the disease (don’t compost it either) and never let the foliage remain in the garden over the winter. Don’t water overhead. Splashing water is a prime way to spread the spores — and they will overwinter. There are also ornamentals and vegetables that are powdery mildew resistant. Not powdery mildew-proof, but resistant. More next spring on this disease and everything you’ll need to know to control it. For now, just clean up.

The autumn Clematis (C. terniflora) is a white-flowering and heavily scented Clematis that many have growing along walls, inside hedges or on trees. It’s not a native and was introduced from China in the 19th century. Some love it while others hate it. The bottom line, though, is that it can become invasive and is now banned in some states. If you need to get rid of it, don’t let it go to seed this year (it’s flowering now) and try to dig it out in the spring at the first sign of shoots. An herbicide can also be used but this can be very tricky depending on where it’s growing.

If you ran short on garlic this summer or if you’re planning on having more in the garden next year, now is the time to buy your “sets,” or garlic bulbs. I had it on my planting schedule for this year but by the time I got to ordering, my two favorite suppliers were sold out. You may find some at a local garden center. and as of last week, Renee’s Seeds still had some available online. Order varieties that are cold hardy. Once you’ve mastered the easy ones, there are dozens to experiment with. Prep the soil now, plant in mid to late September. Don’t plant the entire “set” at once. Plant individual cloves about every 6 inches.

For those of you new to this wonderful world of gardening, keep in mind that fall is the best time of the year for planting many trees, shrubs and perennials. Many perennials can also be divided now, which makes that $30 Hosta much less expensive when you can divide it into three new plants. The trick (it’s really not a trick at all) with fall planting is to get it done as soon as possible to allow the roots to grow and re-anchor the plant. Out here, roots continue to grow well into early winter, and the better the roots grow the less the chance of winter damage of frost heaving.

If you grow Amaryllis and want it to bloom again late this year or next winter, now’s the time to force the bulb into dormancy. Simply stop watering it. No water at all. Allow the foliage to brown over a period of four to six weeks then cut the foliage so that all that’s left are 1-inch stubs. Once dormant, the potted bulb should go into a dark closet around 60 degrees or so for eight weeks. At the end of eight weeks, take it out, begin watering and the whole process starts all over again with flowering four to seven weeks later. No need to repot unless the bulb had been in the pot for two years or more, and repotting is done when you take the bulb out of dormancy.

This is also the time to test your soil. You can buy elaborate kits that claim to test for pH, nitrogen, phosphorus and potassium but these “complete” tests, if not done by a soil lab, are pretty useless. While there are some great labs that can test your soil for a wide range of biological factors, all most of us need to know is our soil pH, or acidity. Many garden centers will do these tests (some for free). Cornell Cooperative Extension does soil pH testing, and you can buy very inexpensive kits to do the testing at home.

Remember to test in several places. This includes landscape beds, vegetable gardens and several spots in your lawn. There’s a great pamphlet on Long Island soils that you can download here, bit.ly/2QzZXMf. It’s a great introduction to our soils and you’ll find out everything you need to know about soil pH as well beginning on page 12. Keep in mind that if your soil pH is off, the fertilizers you use may be marginally or totally ineffective. Keep growing.