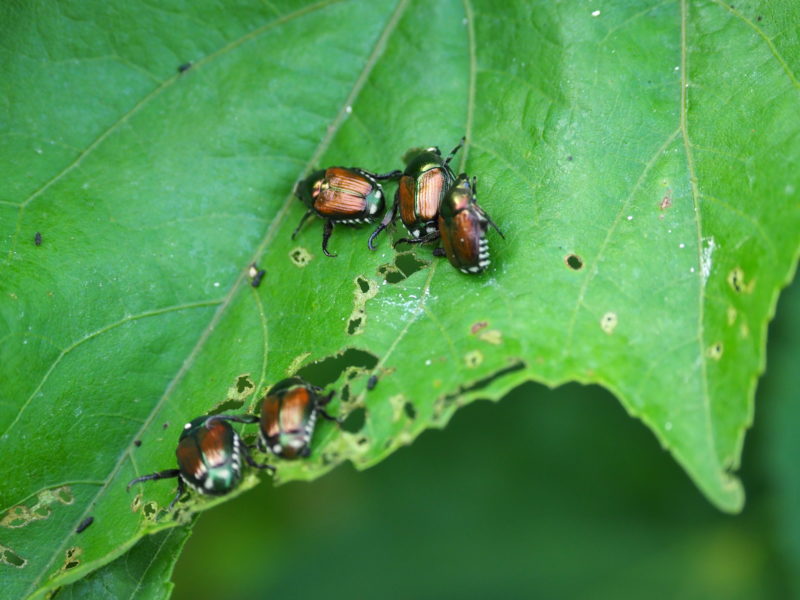 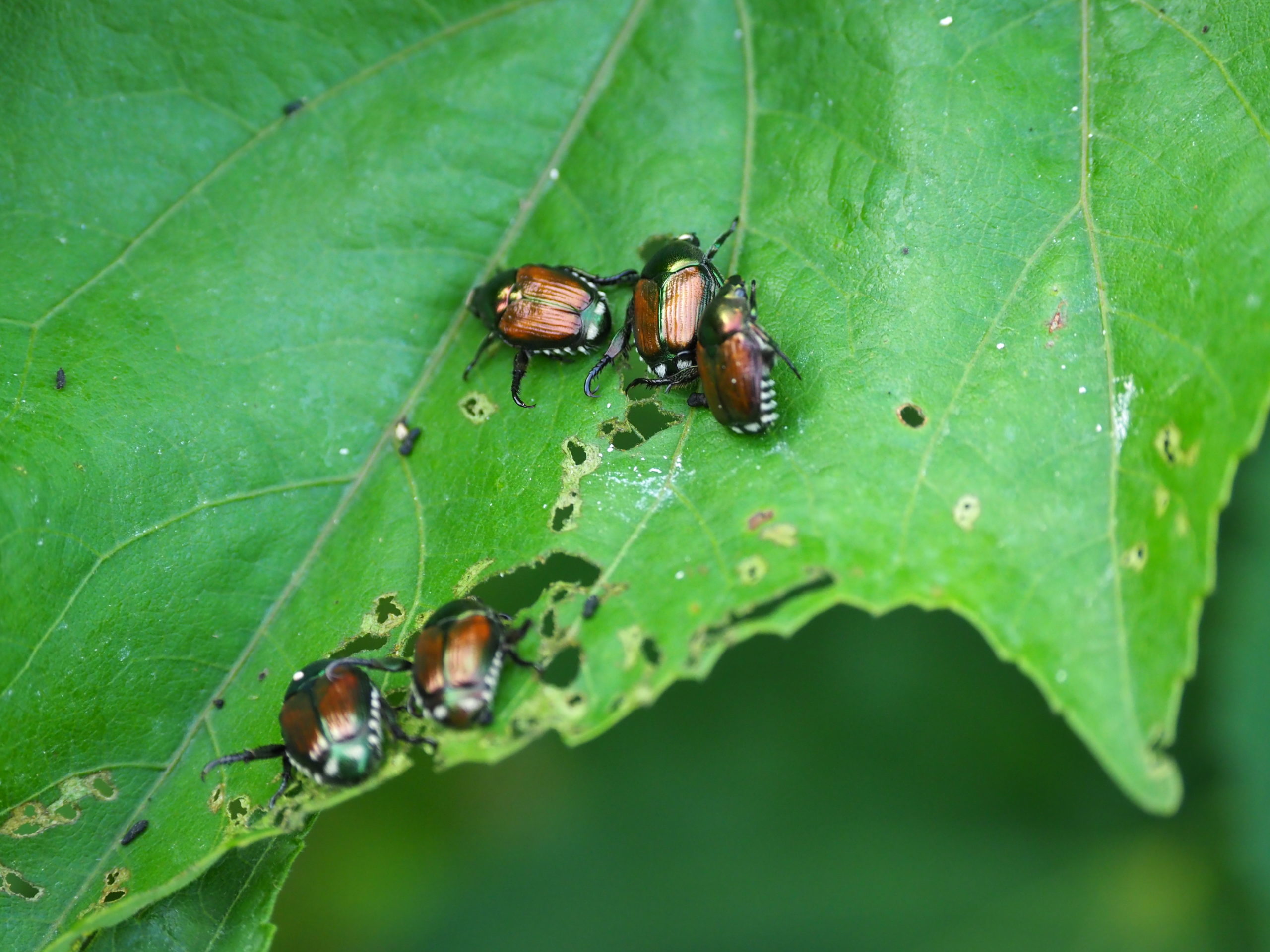 Five Japanese beetles found dead on a hibiscus leaf that had been sprayed with Btg. Did it work? 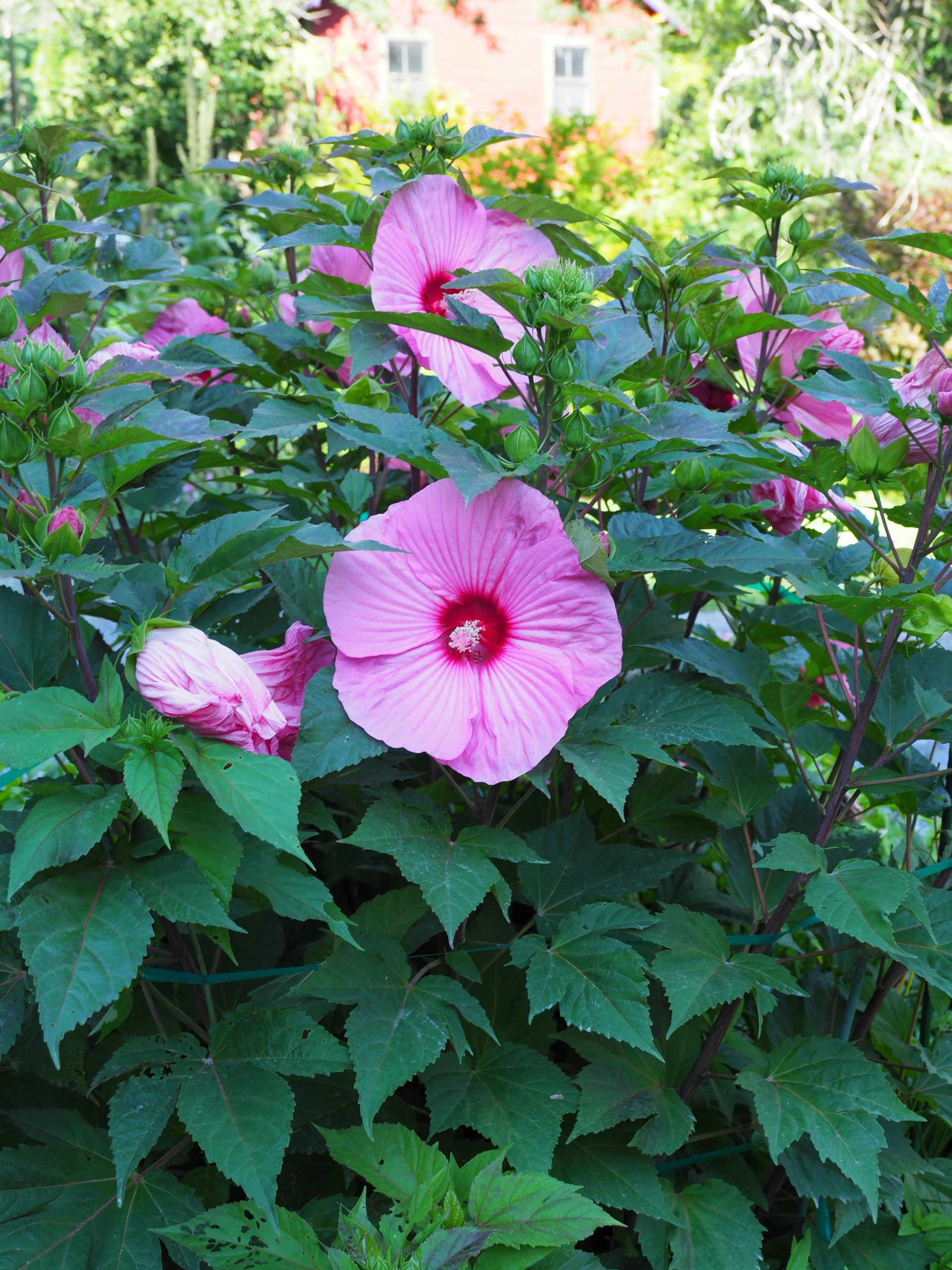 Hibiscus “Brandy Punch” has been a pleaser. People driving by stop to take pictures and pedestrians walking by comment as they see her in her full glory. ANDREW MESSINGER 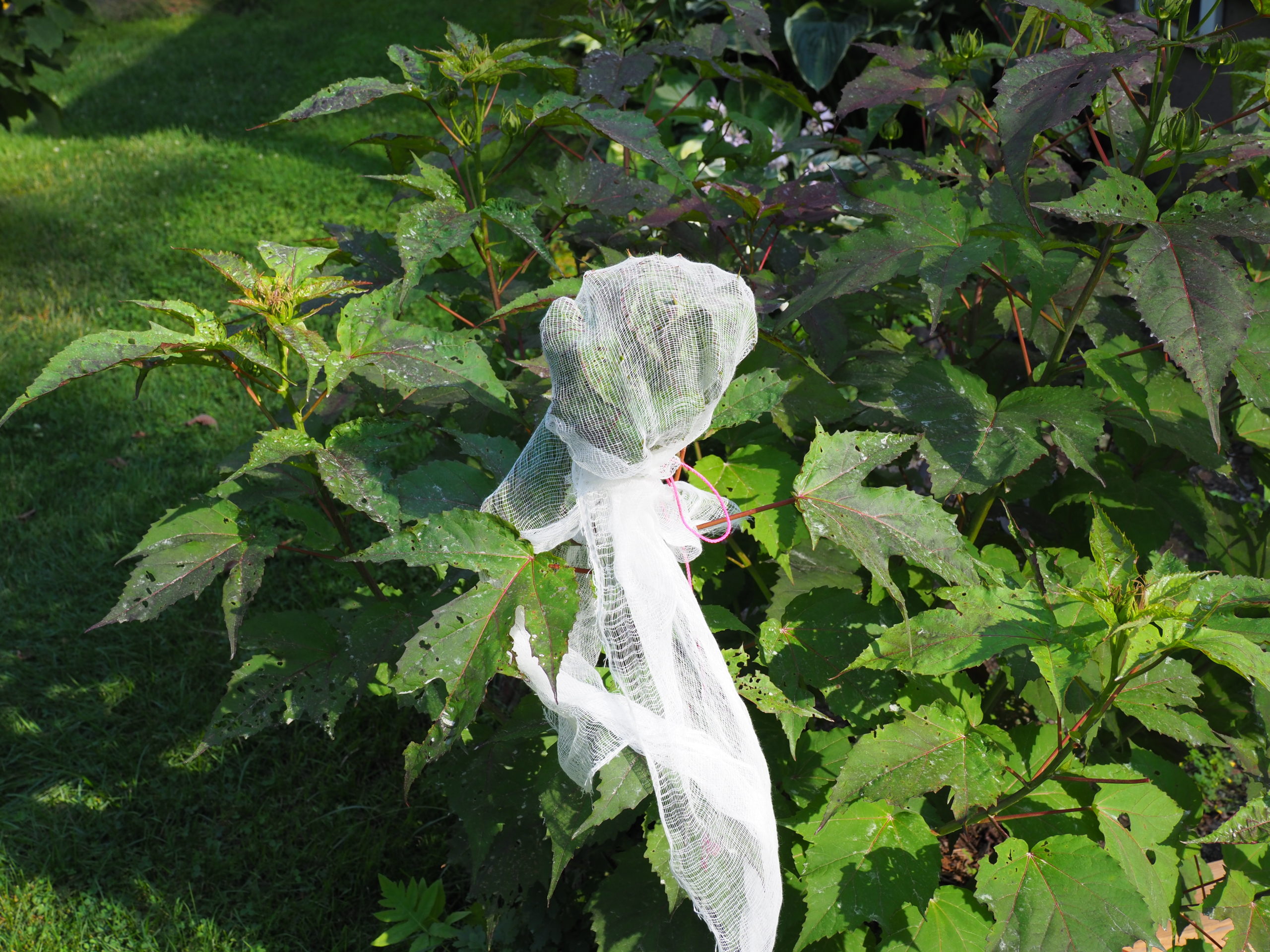 A perennial hibiscus sprayed with Btg (note white caste on foliage). The cheese cloth envelope, tied at the bottom, was an attempt to keep feeding Japanese beetles on the foliage for at least two hours to see if they died. Unfortunately, some beetles crawled out and others crawled in through the cheese cloth. ANDREW MESSINGER 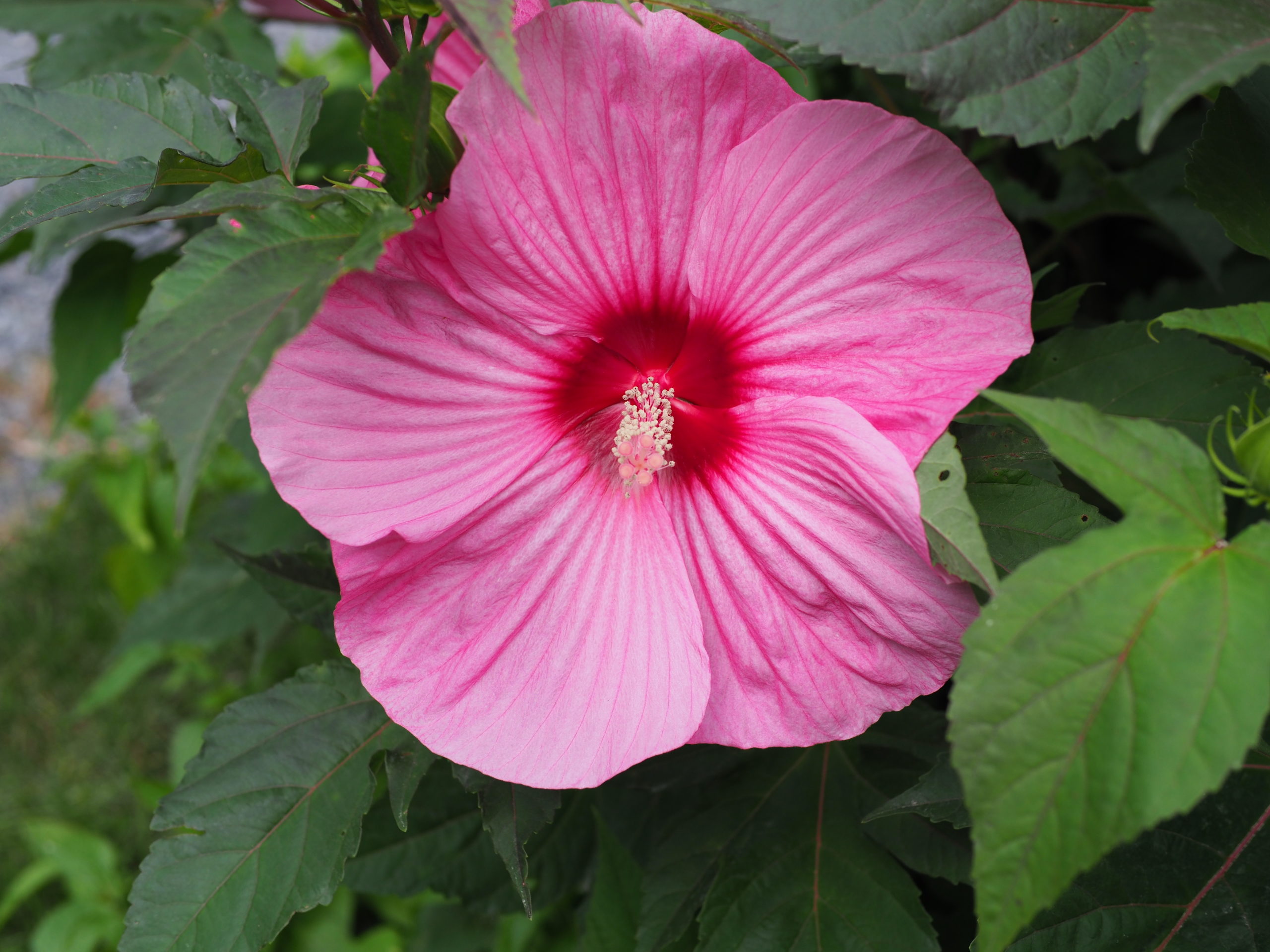 Hibiscus “Brandy Punch” fully open. The perennial flowers for about six weeks and individual flowers can last up to two days. ANDREW MESSINGER 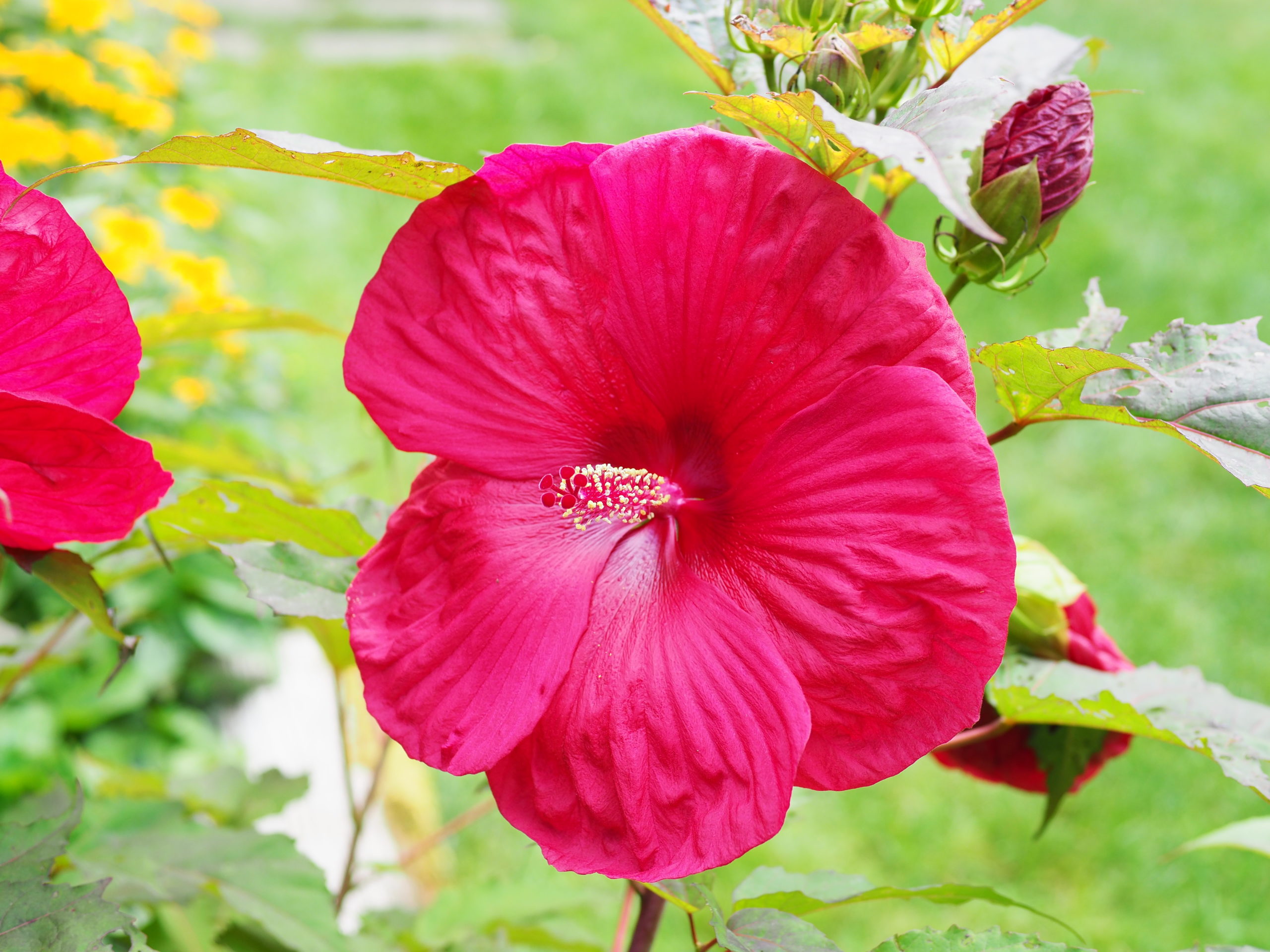 This deep red Hibiscus has a wonderful 8-inch flower with an oxblood red throat, but the plant’s habit is open and not very attractive unless used as a tall background planting. It has no name tag, but it is one that seems to be a Japanese beetle magnet. ANDREW MESSINGER 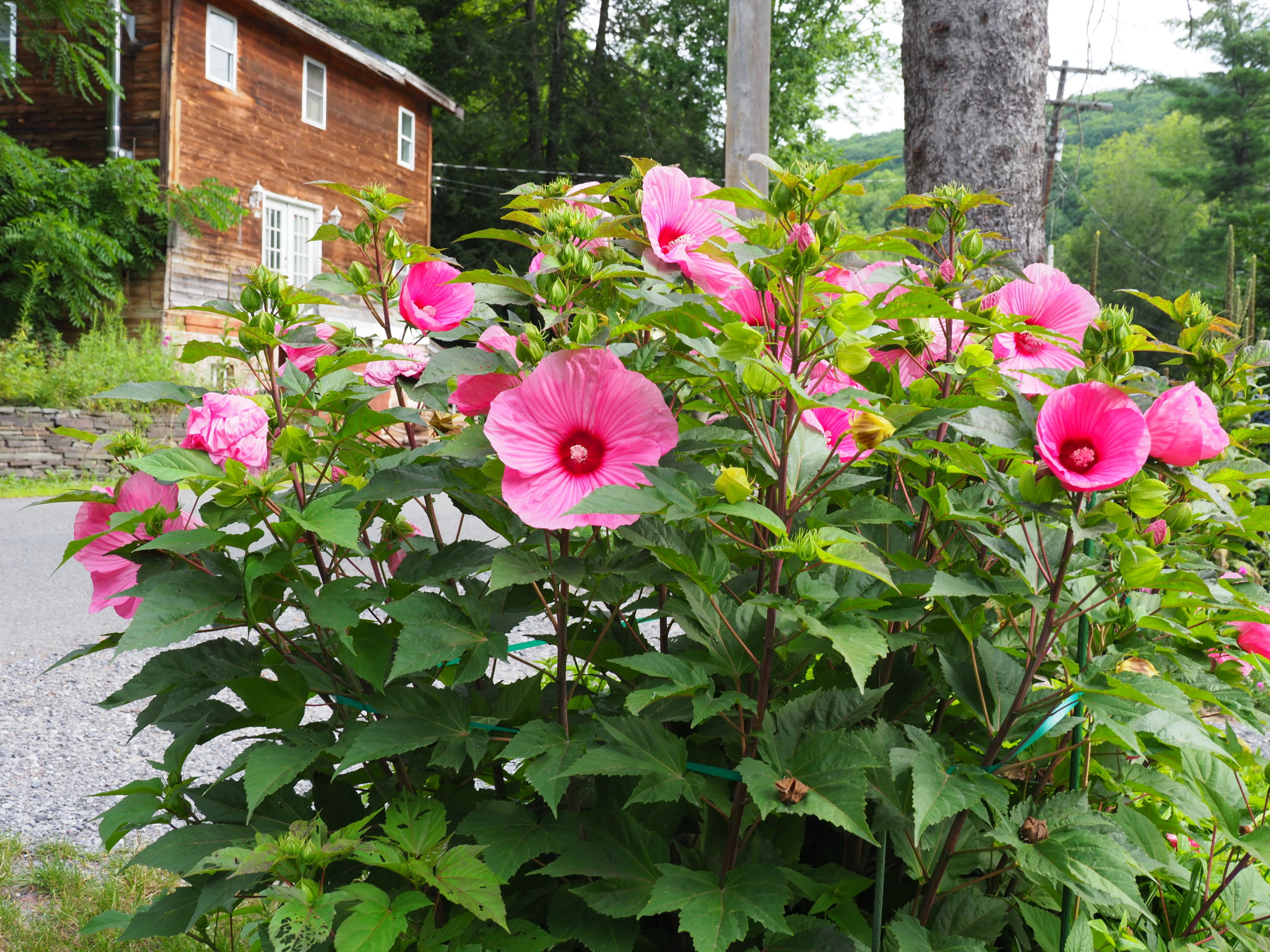 Hibiscus “Brandy Punch” thrives in August heat and can have 20 or more flowers open at one time. ANDREW MESSINGER 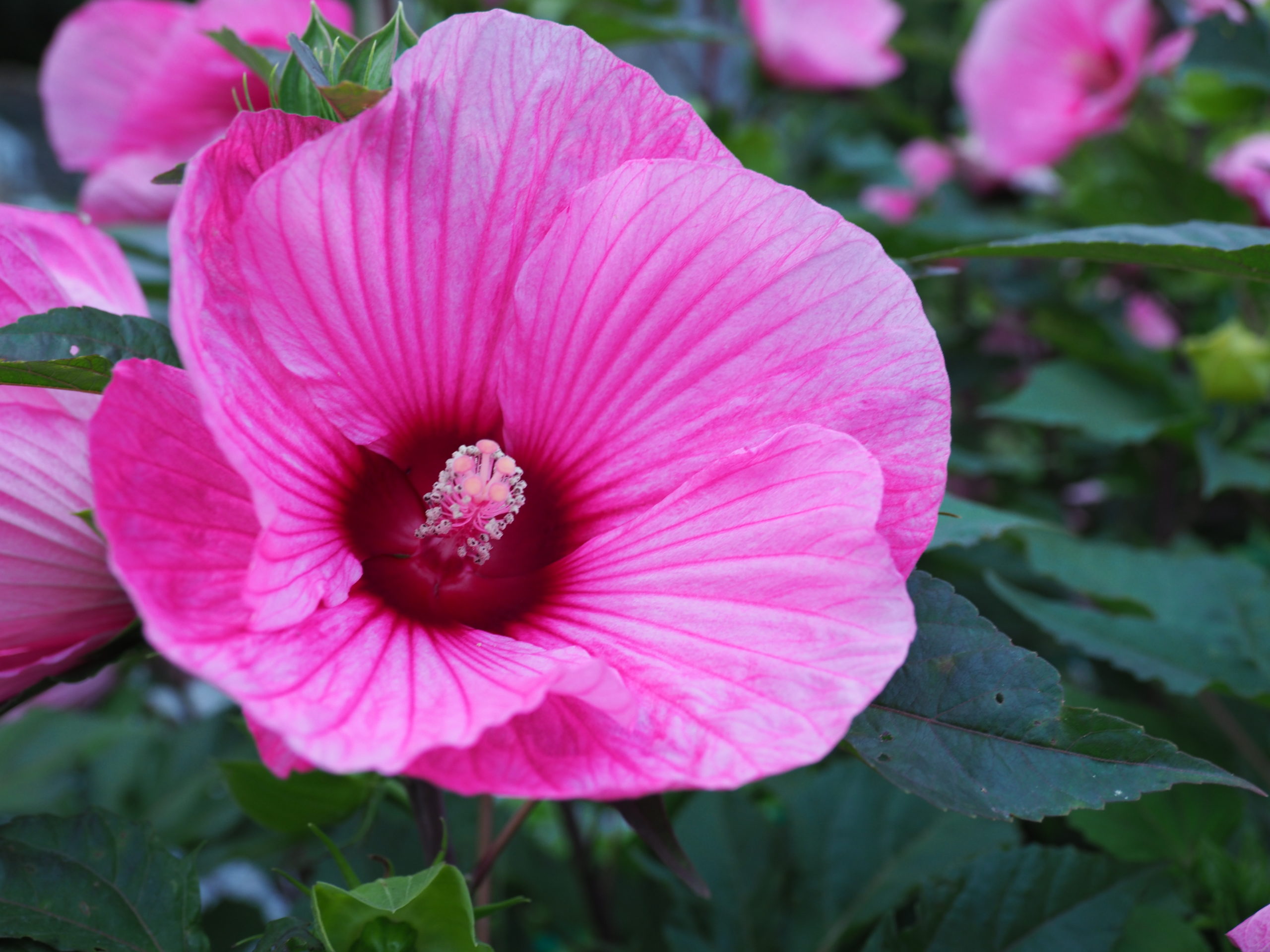 Hibiscus "Brandy Punch" shows off even more as the light begins to fade at the end of the day. Note the pinwheel effect of the darker veins and swirls of the flower petals. ANDREW MESSINGER 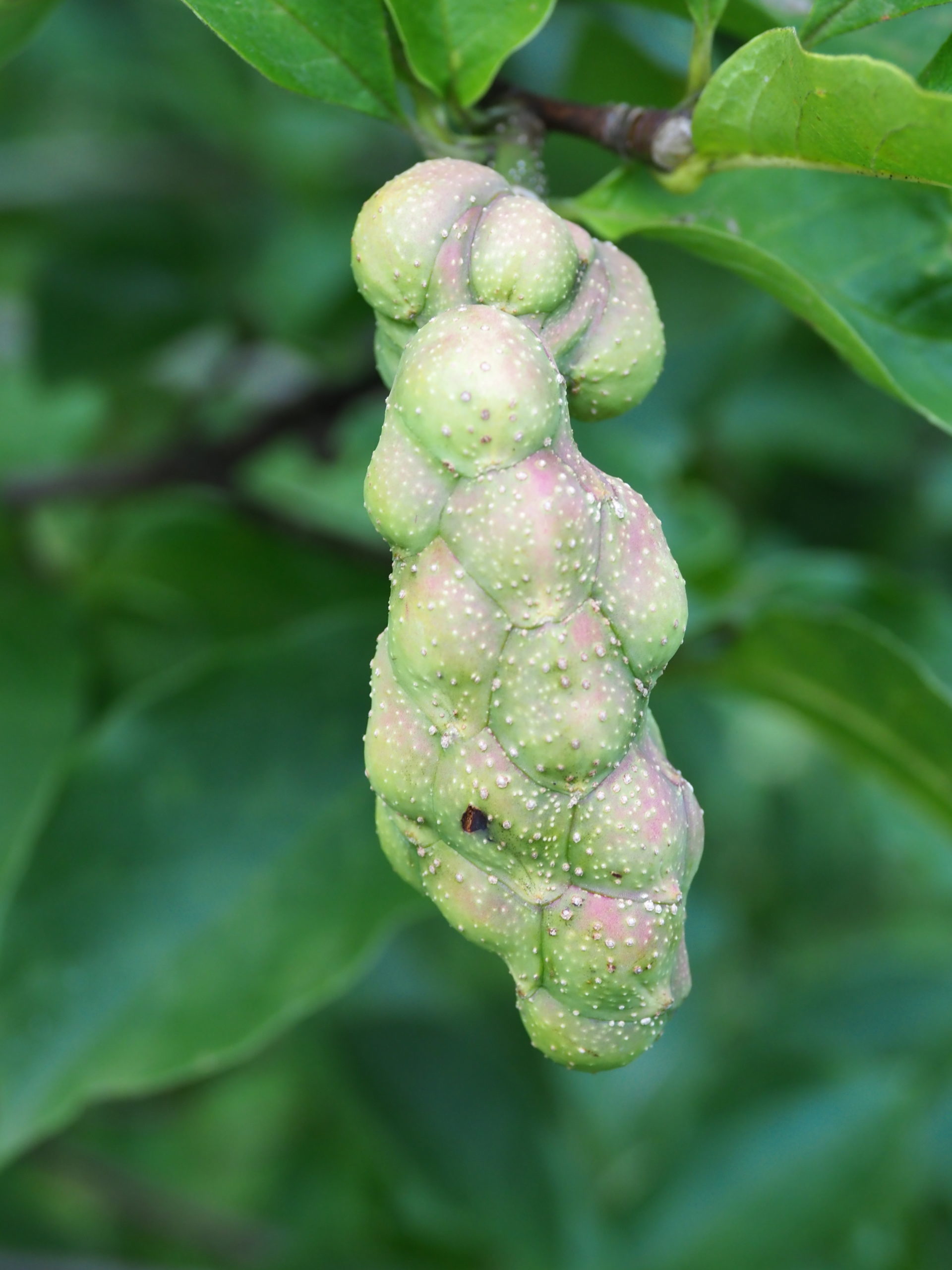 The “fruiting body” of seed inside the encapsulated membrane on Magnolia “Spiced Spumoni.” While looking a bit strange and unusual, it does add interest to the tree. ANDREW MESSINGER

Some good news: “The Hampton Gardener” column will be returning in September, with some minor changes.

I intend to get back the columns covering single topics in depth and, as in the past, a few will be more than one installment. But I also want to continue to provide a semblance of a gardening calendar so you have a guide of what you should be doing, what you should be seeing and what to expect on a week-by-week basis.

The calendar will continue to be called “Garden Notes” but due to space limitations it may not appear every week in the print edition. However, “Garden Notes” will be available every week (or so) on the online edition through 27east.com. Thank you all for your emails, support and encouragement. I hope you’ll continue to stay in touch.

On July 4, the Japanese beetles showed up right on time. Five weeks later, they were gone. Other gardeners I have spoken with have reported light to moderate infestations. While most report seeing them early in July, many of you have had to put up with them longer than I.

One experiment I did this summer was to treat a number of plants with Btg. Bt is Bacillus thuriengensis and there are several subspecies of this bacteria. Some, like Bti (Bt israelensis) have been successfully used for organic control of a number of flies, gnats and mosquitoes. Several years ago it was found that Btg (galleriae) had a fatal effect on Japanese beetles and their grubs, but the results were sketchy and the product availability and consistency wasn’t great. It was worth a try, though, as the only other effective way of controlling this beetle is with the insecticide Sevin, which is extremely toxic to bees. While pyrethrin sprays are very effective, there is no residual effect and repeated spraying can burn foliage in warmer weather. The effectiveness of pyrethrins also drops as it gets warmer.

I was able to get my hands on a pound of Btg, and while that sounds like a lot, you need to mix at least 4 ounces in a gallon of water. That means my pound would only give me 4 gallons of spray. I was able to stretch things, and as a result I sprayed four perennial Hibiscus and five large rose of Sharon (also a Hibiscus but a shrub) three times. I had some guidance from a Cornell entomologist/researcher and we thought we’d devised a way were I could monitor the beetles to see if indeed this stuff worked.

Well, you know what they say about the “best laid plans of mice and men.” I wish I could tell you that the stuff works. But I can’t be definitive. I suspect it works, and that may have something to do with the sudden drop off of beetles in late July, but there was still some damage. And if Btg does work — and there is one published scientific paper in 2019 that says it does — there are two downsides. The first is that in order for the beetles to be killed they need to be feeding on treated foliage. So the feeding damage isn’t eliminated. The second drawback is that the material is toxic to larvae of monarch butterflies.

I’ll report again on this early next summer when I see what my beetle populations are like compared to other nearby gardens. This takes us to perennial Hibiscus, one of the plants that Japanese beetles feed on. I love Hibiscus, especially the tropical varieties, but there are several perennial varieties that have magnificent flowers from July into September and one variety called the beach or seaside mallow is a native to our barrier beaches in brackish areas where it can and does naturalize.

Among the hardy perennial Hibiscus there’s a great deal of variation. Many of the newer hybrids are simply spectacular, but expensive. For those who shudder at the cost there are still the old Hibiscus moscheutos varieties such as Southern Belle (pink, red or white) and its dwarf cousin with enormous flowers, Disco Belle. Both of these can be grown from seed or purchased online and often locally.

The newer cultivars are the results of complex breeding programs in which the Hibiscus species coccineus, laevis, militaris, moscheutos and palustris have been crossed. In many cases these crosses have resulted in flowers with much deeper and vibrant color, more compact plants and much heavier blooming for a longer period of time. Many, especially those with darker green even maroonish foliage, seem to be resistant to Japanese beetles.

My favorite is called Brandy Punch. It blooms for six to eight weeks (or longer) and is subject to only very, very light beetle damage. The plant grows to about 5 feet tall and once established it’s about 5 feet wide. Everyone who walks by the house stops and looks, and some even take photos. Brandy Punch belongs to the species H. cordialis and the pink (not just pink but stunning pink) flowers are about 6 inches wide with hot pink veins and a dark red center.

My last perennial Hibiscus to flower is also a H. moscheutos (var. cordialis) that goes by the name Peppermint Schnapps. This one is not as compact and can grow up to 6 feet tall and as wide when it’s mature. The flowers are a bit more of a standard pink as compared to Brandy Punch but the flowers are much larger at around 9 inches in diameter. The petals are dashed with streaks of deeper reddish pink giving it a pinwheel effect.

Both of these will benefit from a bit of staking to help resist the wind. Like all perennial Hibiscus, they are among the last plants to emerge from dormancy so don’t rush them or freak out when they don’t seem to show up. They can be divided every three to five years with a sharp, straight spade driven right into the crown. If you want to divide them, don’t remove all the old canes to the ground as these will be location markers in the spring. Leave stubs so you know just where the crown is and the crown diameter. You can make four-for-one divisions but a simple half-split division will result in plants that will probably flower the same summer.

And let’s not leave out the trees. I have three magnolias on the property and you may recall my remarks about the 5-year-old magnolia that finally flowered, just one flower, last spring. Across the driveway is another, Magnolia “Spiced Spumoni.” This tree arrived as a 4-foot stick in 2012, and it’s now 18 feet tall. What sets it apart (other than its early May flowers) are the fruits or seedpods it sets later in the summer.

Most magnolias don’t set seeds like this one and they look, well, a little weird. They do add interest to the tree and when the seeds ripen a number of birds and other critters will either eat them or carry them away. In the meantime, I have a magnolia with great foliage and seed pods that are 6 to 8 inches long, somewhat contorted and looking like cocoons from outer space.