Gardening In A Shady Situation - 27 East 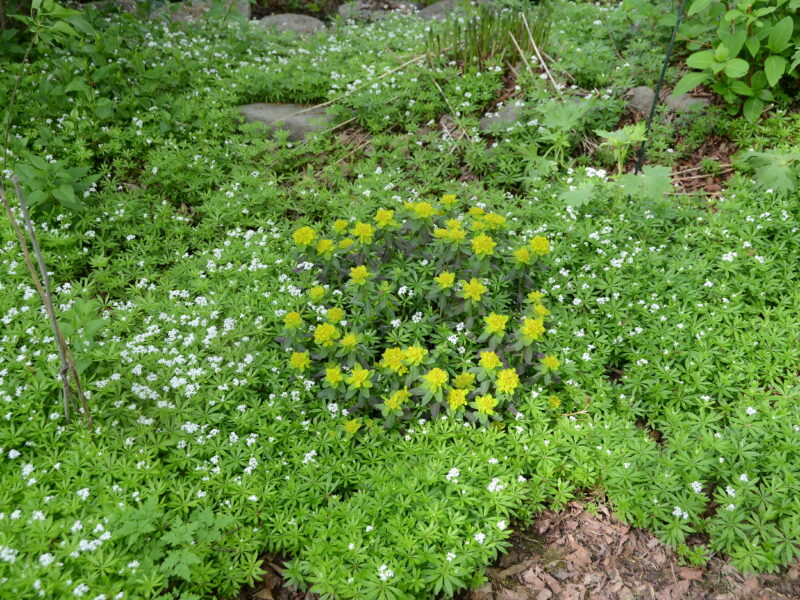 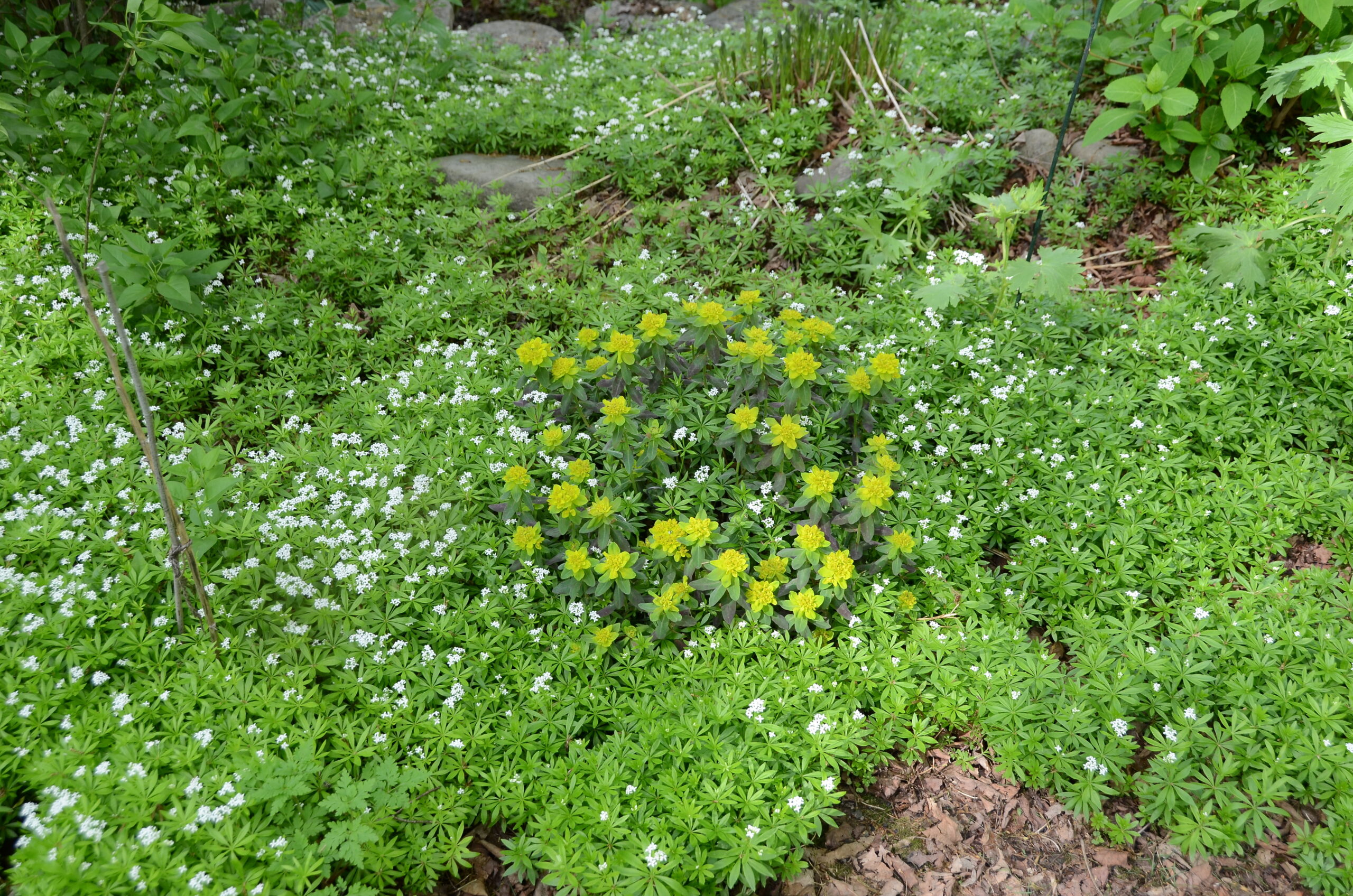 Gallium is a great plant to use as a ground cover where there is poor soil and little to no sunlight. The downside is that the plant likes to wander as it did up the stone wall in the background and into another garden. ANDREW MESSINGER 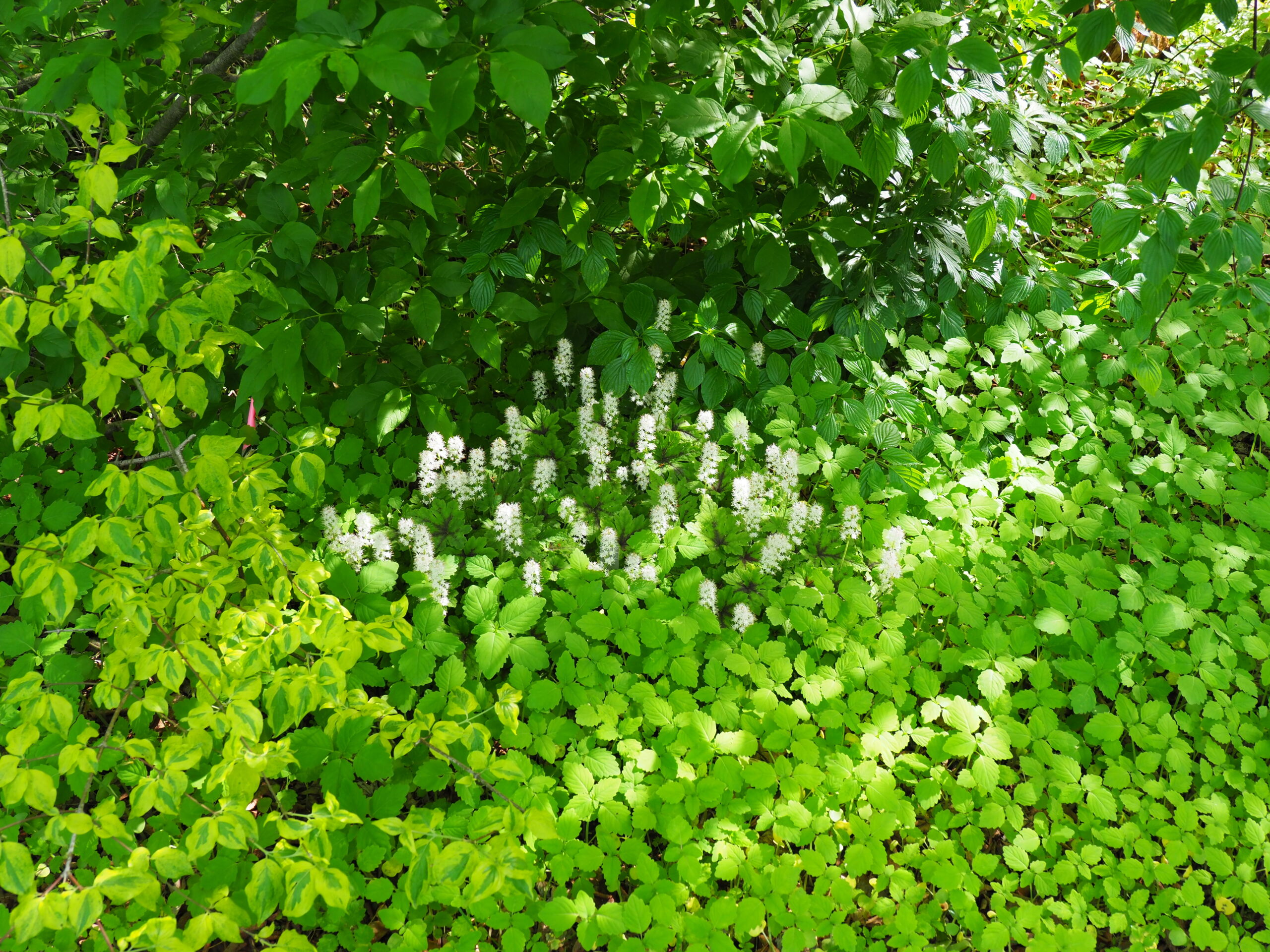 Tiarella, or the foam flower, (center) is a great understory planting for shady areas that remain somewhat moist. The species has white flowers but there are several introductions with pink to red flowers and magnificently colored foliage that thrives in shade. ANDREW MESSINGER 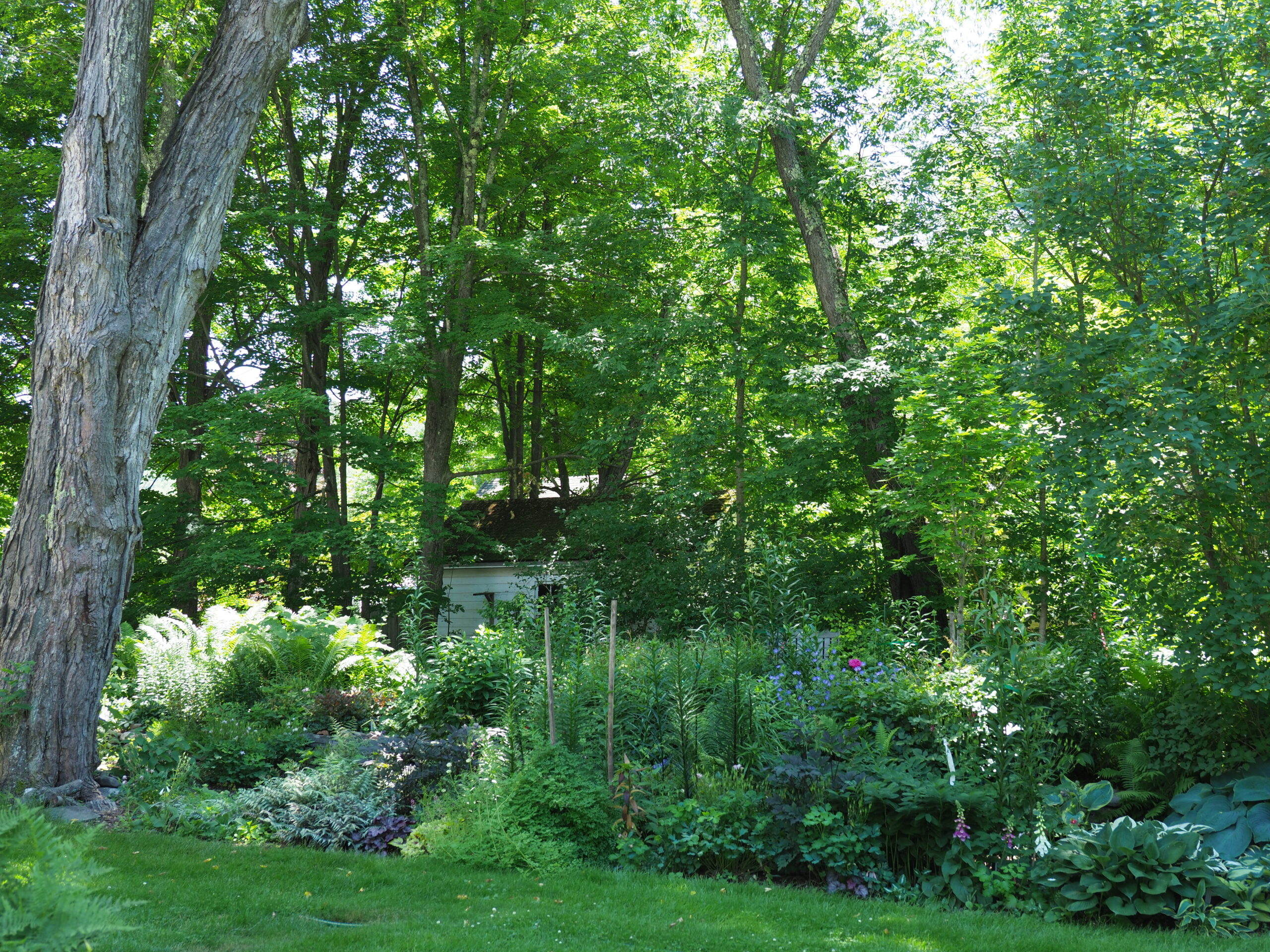 This is an example of "high" shade. Maple trees to the right (west) provide shade as does the 100-foot maple above. Only dappled sunlight hits the perennial border mid-day but provides enough light for hostas, lilies, peonies, astilbe and about a dozen other perennial varieties. ANDREW MESSINGER 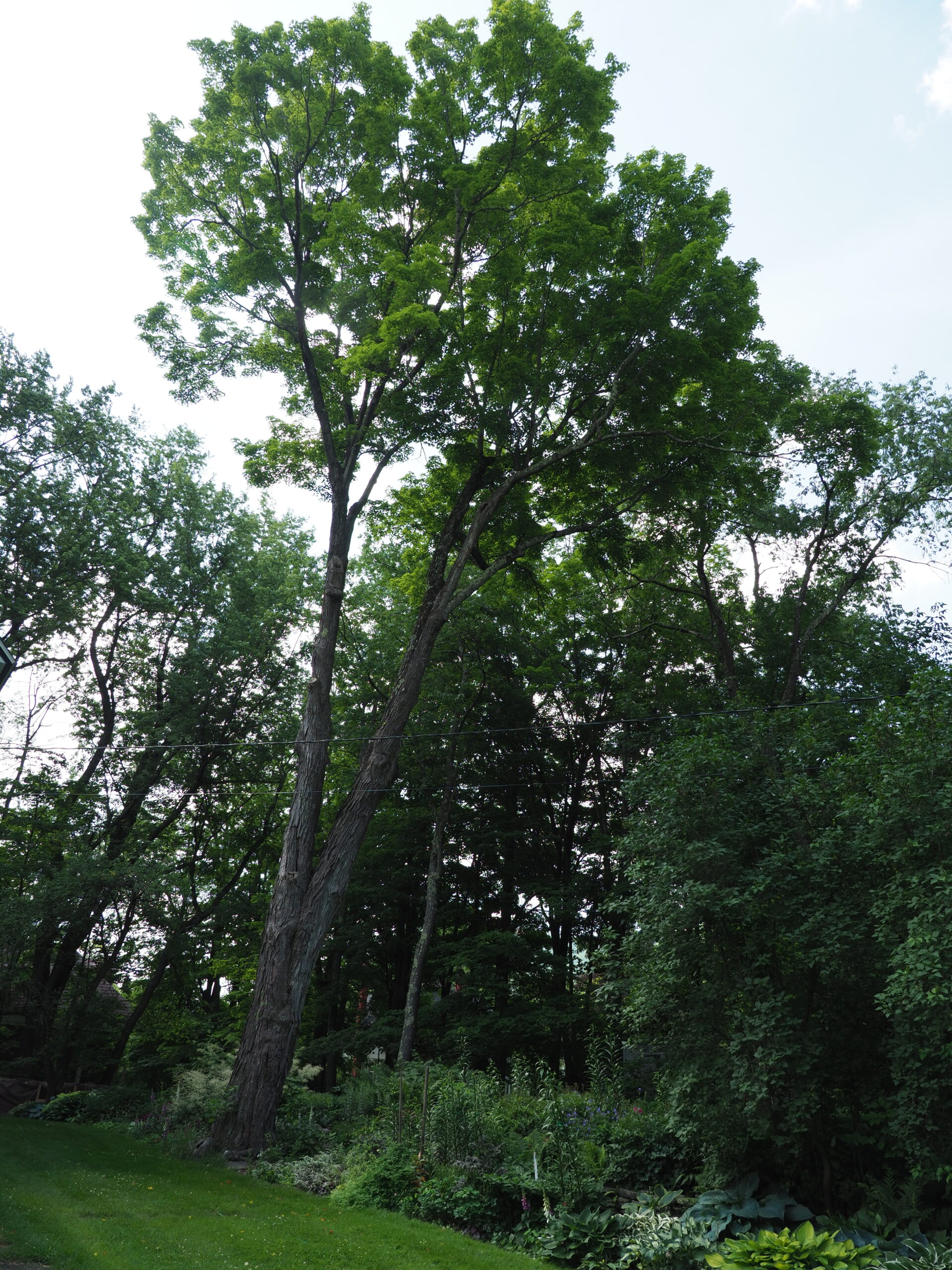 This older maple has been pruned to endure that the canopy won’t catch so much wind to crack the twin trunks. It’s the high shade from the foliage 100 feet above that enable all the perennials and lilacs below to thrive. ANDREW MESSINGER 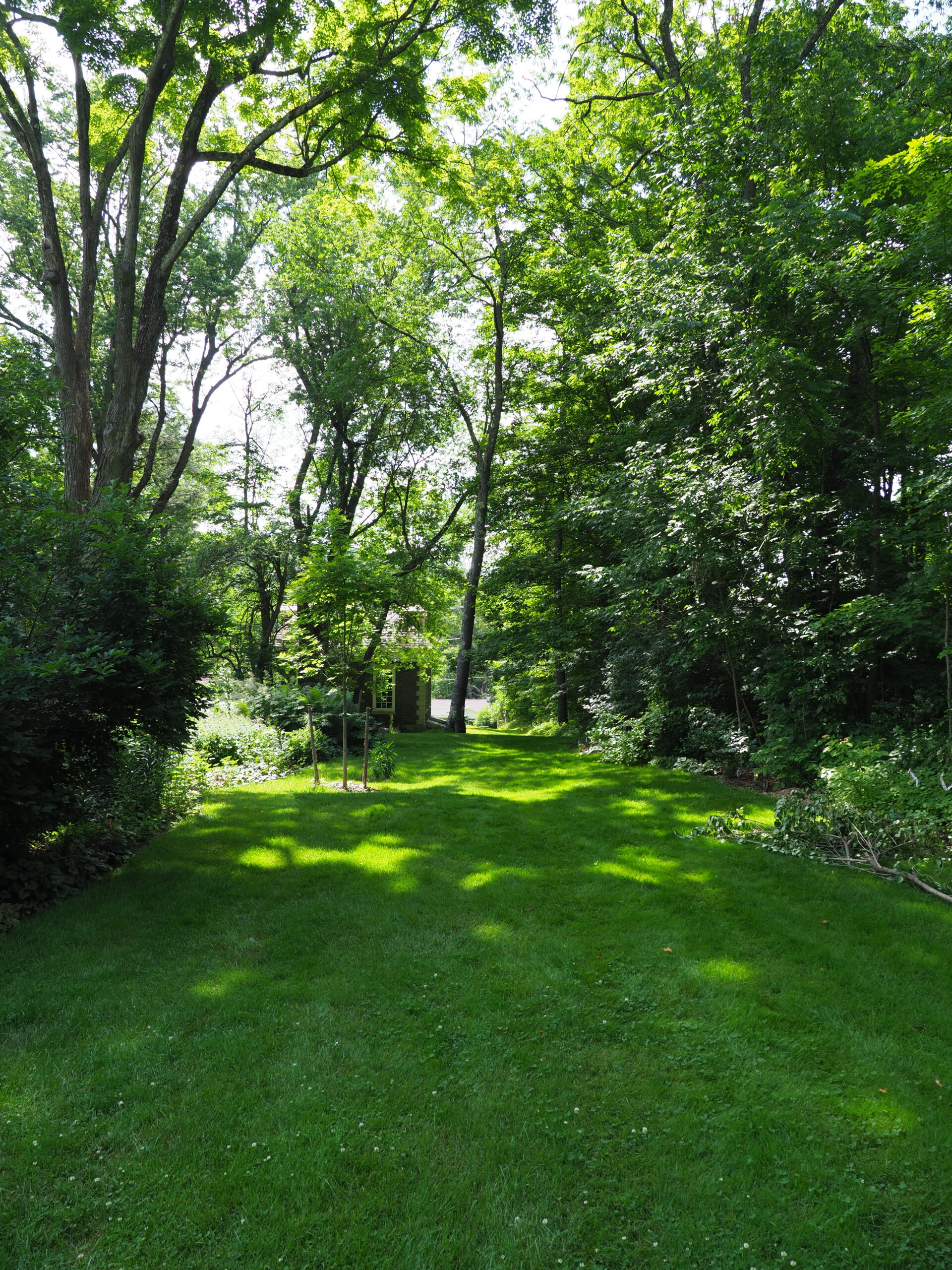 Another shot of "high" shade, but note the lush lawn in the shade. With some white clover mixed in, the seed mix is just right for the lawn area as long as the soil doesn’t totally dry out. The small maple tree just left of center (see the two stakes) is the replacement for when the very tall tree meets its demise. ANDREW MESSINGER 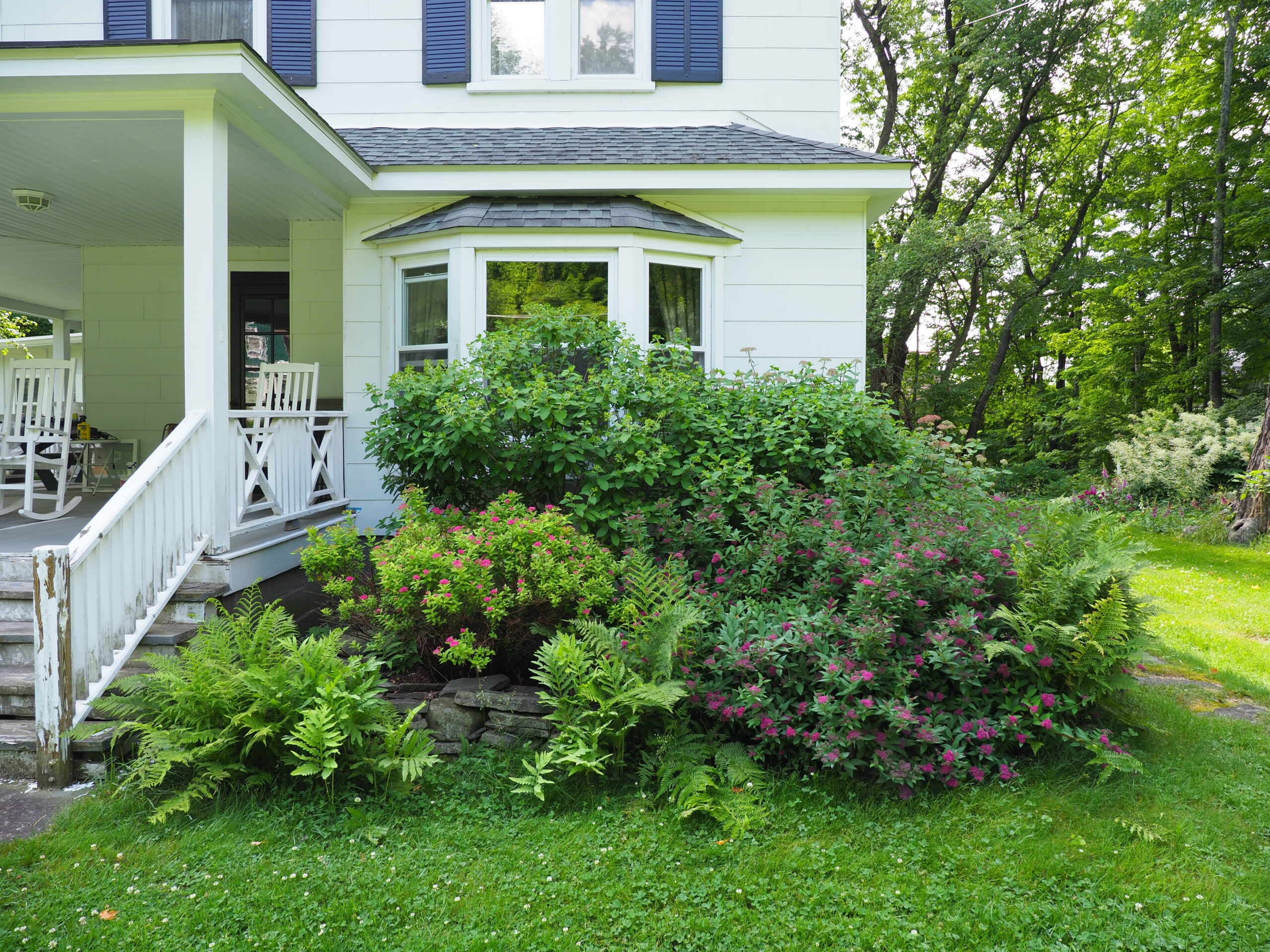 This is the north-facing end of a house that only gets sunlight for a portion of the year and only for a part of the afternoon. However, after some experimenting a pair of hydrangeas (budded and in the back) fill in the background while two Spirea in front are just coming into bloom. The Spireas are in the "Double Play" group and will reflower again later in the summer. ANDREW MESSINGER 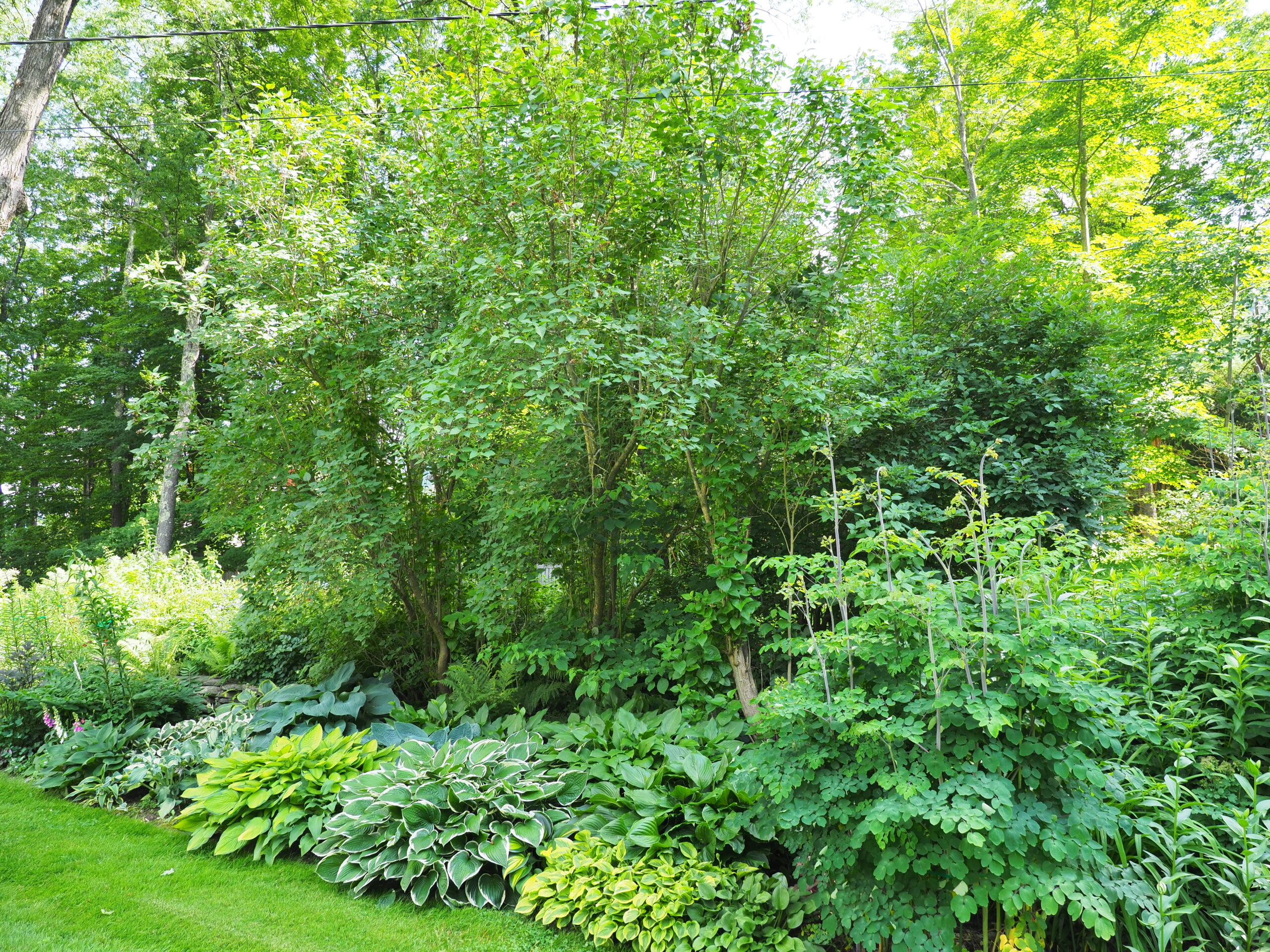 Most hostas are shade tolerant with most burning up in direct sunlight. Here the lilacs have been allowed to grow to 20 feet tall and provide all-day shade to the hostas in the border. Again, there is bright light, but the sun never reaches the hosta foliage. ANDREW MESSINGER

Several years ago I was invited to a charming house in the Village of Southampton that had been worked on by nearly every landscape contractor in town.

Each had left a horticultural clue behind. One had taken advantage of the setting by using Rhododendrons, while in a different corner, another had established a fern bed. In yet another alcove, Digitalis was rising above the tall but sparse ornamental grasses to several beautiful crushed strawberry colored flower spikes.

One common thread, though, that each of the contractors had to deal with throughout the property was the abundance of shade. It’s a common theme in our villages and hamlets but less so in properties closer to the ocean and bays where taller, shade-providing trees are less common.

Nearly the whole property was heavily shaded except for a small area around the swimming pool. As a result of this shade, nearly all the plantings below the stately maples were reaching for what little filtered light leaked through the dense overhanging canopy. Since the maples virtually suck the water from the surface of the soil, everything seemed to be in constant need of watering.

Smaller trees planted within the past few years were distorted almost beyond recognition because they had become so gangly. Some rhododendrons hadn’t flowered in years and of course no matter how much grass was planted and replanted it wouldn’t grow. Yet, each landscaper and designer bowed to the owner’s wish for grass under the trees, and not one had the intestinal fortitude to tell the client that it wouldn’t work.

Of course, what the property owner wanted to know was why nothing was growing or flowering right and what could be done to remedy the situation. There were three alternatives: Grow only plants that tolerate shade, increase the light reaching the garden area by thinning out the foliage canopy above and lastly, experiment.

But back to the very beginning; let’s remember that the way we perceive and define the word “shade” is not consistent from one person to another, nor one garden to another. Shade in the outdoor garden can range from open shade with unobstructed overhead sky found on the north side of buildings or tall trees, to the partial or rather complete shade found under many deciduous trees and all the gradations in-between.

Consider what causes your shady situation. Is it from a tree or a structure? Is it temporary and changing as the day and seasons change? I remember some fuchsias growing in a couple of huge concrete urns. The plants are magnificent and known shade lovers, but for a half hour each day the sun would shine directly on them and they would wilt. An hour later, back in the shade, they fully recovered. But will that half hour of direct sun be an hour of direct sun four weeks from now as the angle of the sun shifts?

The latter kind of shade may vary greatly depending on the character of the tree and its canopy as well as any pruning and thinning that has been done to “open” the tree up. Many evergreen conifers have a heavy unrelenting shade not very conducive to under planting, whereas many deciduous trees provide abundant light that is filtered through the summer while providing no shade at all in early spring, a boon to those wanting the early color of spring bulbs.

Most ornamental shade plants favor such high, filtered sunlight provided that the trees are deep rooted and thus not competing for water and nutrients with the species planted underneath in their shadow. As an example, most beech and maple species exemplify canopied trees having extensive, shallow, fibrous surface roots, which make it almost impossible to grow any shade-loving plants underneath them.

Unfortunately many landscape architects and designers either don’t take this into account when planning or they simply don’t know their plant material — and it’s truly amazing how many of these “professionals” don’t.

A homeowner’s first attempt at coping with shade is usually with a ground cover that is intended to fill the empty spot under the tree where nothing would grow. More often than not, Pachysandra terminalis is tried and is very much overused. However, it is “safe” and not invasive as some believe. While it often does the trick it is not as evergreen as touted and can die back severely in cold winters if there is no snow cover.

In most heavily shaded areas you’d probably be better off with an ornamental stone or bark mulch covering and take a clue from the bare ground that was there before you attempted pachysandra. Moss may also be an option and there’s at least one moss nursery (mossacres.com) to lend a hand. Another plant, Gallium odoratum (sweet woodruff), has become quite popular. It tolerates a great deal of shade with foliage from April through late November and white flowers from mid spring through summer. Alas, it is a true perennial that dies back to the ground each winter and it will not behave well. It tends to wander and can be difficult to manage, ending up in unwanted places and becoming weedy.

You can also learn from nature to find what does grow well and naturally in the shade. In a spot where moisture can be retained in the soil, our native Tiarella cordifolia (Foam flower) and its cultivars not only grow in the shade but also flower in white, pinks and near reds.

One thing that I’ve only touched on lightly is that shade can also mean something to you and your plants besides a lack of light. In the case of large deciduous trees, the foliage canopy has an outer area, the tree’s circumference, called the drip line. This is where the tree’s foliage coverage is at its widest point, and when it rains, this foliage umbrella enables the tree to shed a majority of the water away from the center of the tree out to the drip line where it falls to the ground.

This is also the spot where the most active root growth is. As a result, even during heavy rain events the understory of the tree can remain bone dry to only slightly damp, and it’s only during long “soakers” that this inside area and any plants you want to grow there get any moisture. Shallow-rooted plants may survive while deep-rooted plants merely languish and die in a drought.

Most of the ornamental perennials that we rely on for shady plantings have their origin in our woods — a logical place to look — but the woods of Japan and China have also given us some surprises, especially in the Saxifrage family. Saxifrage sarmentosa is a fairly common greenhouse plant and houseplant. How it got indoors is a good mystery because it’s actually quite hardy and shade tolerant. Though it is not always evergreen it does fill in rapidly in the late spring using stolons that slide through the surface soil and set new plants about as a strawberry plant would.

At this point, to continue would only result in a listing of shade-tolerant trees, shrubs, herbs, annuals and perennials, which you can find in books and online. Much to your surprise, I think you’ll find the list in each category quite extensive and worth looking into. The Brooklyn Botanic Garden has an excellent book on the subject with over 20 articles on various shady subjects that are guaranteed to inspire. Wyman’s Gardening Encyclopedia, though dated, has several pages of plant lists. There are numerous popular texts on the subject but my favorite is George Schenk’s “The Complete Shade Gardener.” Garden center staffs, garden tours and your neighbors are also valuable sources for ideas and information.

As for shade and your lawn, the news isn’t great. There are shade tolerant seed mixes and surely there are turf species that do much better in shaded areas than others. But remember that one truism about shade: In most circumstances where there’s shade there’s dry soil. While you can irrigate in these areas this may result in the moisture sitting on the grass blades for hours at a time — a perfect breeding situation for diseases. But again, experimentation with different shade-tolerant types of grass may help, but remember they are shade tolerant, not shade thriving.

In the end, there are some things in life that we have to learn to deal with. Add to the list of death and taxes, shade. We can prolong our lives through prudent living. We can reduce our taxes through prudent financial planning. And yes, you can even learn how to deal with shade in your landscape. Keep growing.