Get To Know Hydrangeas - 27 East

Get To Know Hydrangeas 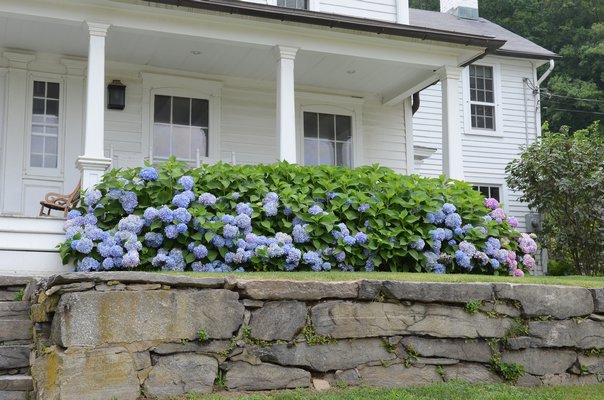 The bottom half of these big-leaf hydrangeas indicate from their blooms may have been protected by winter snow or the plans were improperly pruned. Note the blue flowers until the far right end where they turn pink. This is due to changes in the soil acidity on the right end. ANDREW MESSINGER 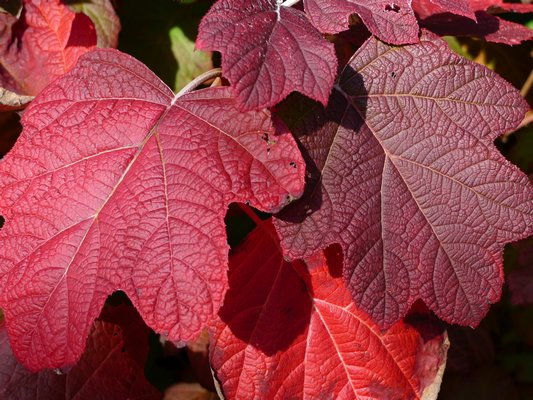 The actual margin of the oakleaf hydrangea can be somewhat variable but all are reminiscent of an oak leaf. This picture shows how the foliage that’s turn from its summer green to a late October red. ANDREW MESSINGER

These are big-leaf hydrangeas along a driveway in Southampton (May 2006) after the very cold winter of 2005-06. All of the flower buds were frozen with some protection of the lower parts from snow cover. They did no rebloom until the summer of 2007. ANDREW MESSINGER 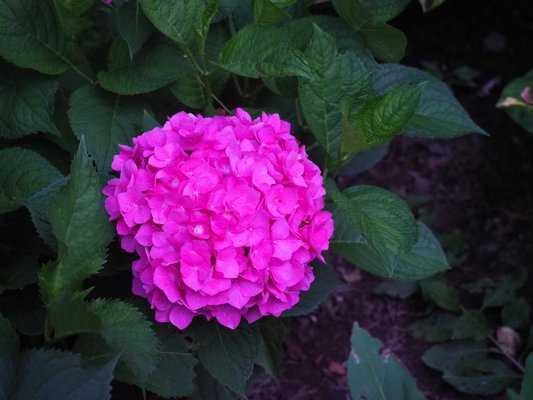 Hydrangea macrophylla 'Let’s Dance Rave' in the Hampton Gardener’s zone 5 trial garden in August of 2017. Said to be an everbloomer or rebloomer, in two years of trials it has not shown this trait but it may in a warmer spot. However, the flowers were incredibly vibrant, large and lasted up to two weeks. ANDREW MESSINGER OLYMPUS DIGITAL CAMERA

If privet is the shrub that made the Hamptons, then the hydrangea has to be a very close second.

As spring turns into summer, the hydrangeas that adorn many Hamptons driveways, walkways and gardens begin to bloom. And unlike most shrubs, they bloom for months. Well, most of the time and in most years.

Some years, a harsh winter can wipe out the buds that would have opened just about now. Some years, the deer feast on the buds and stems like they were surf and turf at a four-star restaurant. And then there are the ones that you wanted to be blue that ended up pink and the ones that you pruned in March that should have been pruned in September. Yes, these are a tricky bunch of shrubs, but this week I’m going to lead you on the right path and give you one single piece of advice that will solve all your hydrangea problems.

As you may have noticed, there is more than one type of hydrangea. In fact, there are six distinct types. But in recent years, plant breeders and hybridizers have muddied these waters so that the differences may not be as distinct as they once were. Let’s at least start with the six major, traditional groups.

The bigleaf hydrangea (Hydrangea macrophylla) is the bell of the ball. With pink, purple or blue bell-shaped flowers, this is the plant that most people envision when they say “hydrangea.” This group is hardy to zone 5 and is pretty common out here. And if you’ve ever bought a hydrangea in a supermarket or garden center that’s in full bloom in January, it’s probably a bigleaf. They can be planted outdoors in late April after the threat of frost, pruned in late summer, and may, just may, make it through the winter and flower the following summer.

Panicle hydrangeas (H. paniculata) are some of the easiest, most rewarding plants you can grow. Also known as the “pee gee” hydrangeas, they flower every year and their blooms begin white or green before maturing to a beautiful pink, burgundy or red color. These are super hardy and you can find them all the way into hardiness zone 3.

Oakleaf hydrangeas (H. quercifolia) are the four-season hydrangeas. They have handsome oak-like leaves, big showy white flowers in the summer and amazing fall colors with bark that adds a particular winter interest. These are native North American shrubs and are hardy to zone 5. Mountain hydrangeas (H. serrata) are closely related to the bigleaf but are more cold tolerant. Their flowers are also pink or blue but a bit smaller and flatter than their showier cousins. This group is also hardy to zone 5.

Climbing hydrangeas (H. anomala) are vines that clamor up trees and walls attaching themselves with tiny clinging aerial roots. These have white flowers, can be relatively slow growing and are hardy to zone 5. Last in the family is the smooth hydrangea (H. arborescens) which is also a North America native that has large orb-like clusters of white, pink or green flowers. These are very easy to grow, reliable, very hardy and thrive down to hardiness zone 3.

Now while you probably noticed that all of the above six groups are hardy in our zone (7ish) there is a caveat. Yes, they are cold hardy, but some have issues with full sun and hot summer days. In this case, these shrubs can simply be planted in lightly shaded areas where the midday sun won’t cause them to wilt and stress. And from time to time, when we have a very severe winter, the bigleaf hydrangeas are the ones where you’ll wait and wait for the buds to swell and open in the spring, but they won’t or don’t. The exception, though, is a severe winter when we have a heavy snow cover. After this type of winter, you’ll notice that the buds at and below the snow depth will overwinter and flower that summer, while the ones above the snow that were exposed to the cold and were not insulated by the snow will die on the stem.

And then there’s the oft-asked question, when do I prune them? Here’s one simple answer: No one pruning regime works for all six groups of hydrangeas. So, ya gotta know what or who they are before you can figure out when and how to prune them. Keep in mind that bigleaf, mountain, oakleaf and climbing hydrangeas bloom on old (as in 1 year or older) wood. This means they form their flower buds for the following year immediately after flowering during the current year. These types are best not being pruned unless you need to coerce them into a particular shape. This makes them low maintenance.

Panicle and smooth hydrangeas bloom on new wood. This means that once new growth begins in the spring, they begin to develop flower buds for that summer. These two types can pretty much be pruned late and early and they will or should still flower.

There are other reasons why one of these plants may not flower in any particular year, like a late frost that burns the new buds, but in most cases the lack of flowering is usually due to pruning at the wrong time or winter-kill, when the stems die back to the ground and take a full year to re-establish.

And just to confuse you a bit more, there are the reblooming hydrangeas. These bloom on both old and new wood, making pruning just a tad more confusing. Our extended summers may make these an interesting pick but my trials over the years have given less-than-stellar results, especially in hardiness zones 5 and 6. If you want to try a few of these, look for “Let’s Dance” as part of their name, although there are many others on the market now.

But, as promised, here’s the great key to success with hydrangeas. It’s a book published by Lorraine Ballato this year and it’s the best there is. Lorraine is a Connecticut garden writer and horticulturist and her book “Success with Hydrangeas, A Gardener’s Guide” (B&B Publishing) is simply great. It covers every imaginable aspect of hydrangea growing, has wonderful pictures covering the four seasons and Lorraine even gets into the current breeding frenzy in hydrangea-land and makes a little more sense of it. The book is well indexed, making its use as a resource very easy.

In four parts—“Getting to Know Hydrangeas,” “Giving Hydrangeas the Best Care,” “Troubleshooting Hydrangea Problems” and “Hydrangeas in the Landscape”—she covers 13 chapters of information from feeding to pruning, protecting from wildlife, hardiness and even propagation as well as the rare but possible disease and insect problems. It’s really a great book that many of you will read from cover to cover and refer to for years to come. Really well done. Keep growing.