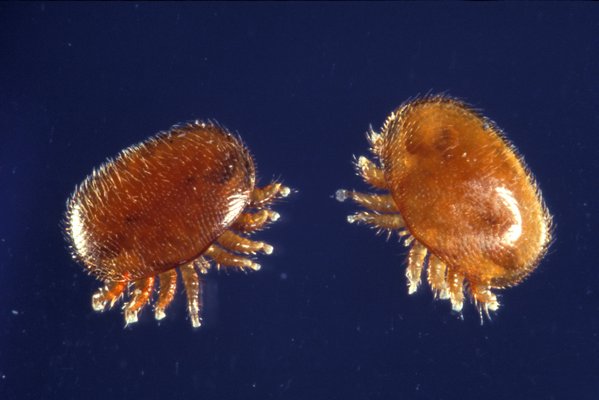 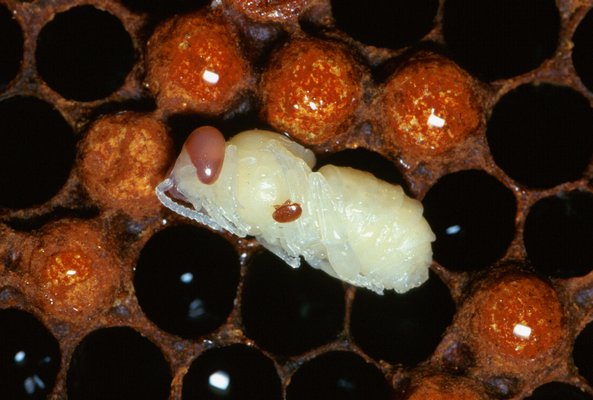 It’s news to pretty much nobody that honeybees are in trouble.

When beekeepers around the U.S. opened up their hives this spring, they found that, on average, 40 percent of their colonies had perished over the winter. The saddest part of the story may be that a catastrophic loss at that level was pretty much just another year in beekeeping—bad, but not exceptional.

The cause of this seemingly endless loss of bees, called honeybee colony collapse disorder, has led to equally endless discussion among beekeepers and scientists who study this sort of thing. It would be nice to land on one single cause of the crisis, figure out a solution, and live happily ever after. If only it were that simple.

Scientists have tagged several villains. Varroa destructor mites hold the starring role, and are often called the greatest threat to bee colonies worldwide. This tiny little creature, barely visible to the naked eye, attaches itself to an unsuspecting honeybee and lives off of its body fat. Delightful little bugs, varroa mites look like ticks and, like ticks, weaken their host and spread disease from one bee to another. When they’re not feasting on adult bees, they’re laying eggs in brood cells, so their young can snack on developing larva, truly haunting the poor bees from cradle to grave.

In addition to varroa mites, bees are also susceptible to infestations of tracheal mites, even smaller pests which live in their breathing tubes. Both of these parasites can leave bees in a weakened condition, making them more likely to perish from myriad causes.

Then there’s pesticides and herbicides, which Americans can’t seem to get enough of in their quest for the perfect lawn. Roundup, the most widely used herbicide in the world, has not only been shown to cause cancer in people, it has also been shown to destroy a vital bacterium that lives in the guts of honeybees. Like mites, this leaves them weaker and susceptible to other threats.

Neonicotinoids, a class of neuroactive pesticides introduced in the 1990s, are now the most widely used class of pesticides in the world. Banned by the European Union out of concern for the welfare of honeybees and other pollinators after the European Food Safety Authority confirmed their link to colony collapse disorder, they are still widely used in the U.S. On a positive note, there is a trend toward regulating their use here, with several states mandating no expansion of their use, but no state has yet banned them altogether.

So those are the main toxins and parasites, and honeybees come in contact with all of them. But I think a largely overlooked factor in honeybee health is stress. Just like us, when bees are stressed, their immune systems can become compromised and a toxin they might have tolerated, or a pest they might have overcome, becomes fatal to an entire hive.

You may wonder, what on earth does a bee have to be stressed over? She wakes up, she flies around collecting nectar and pollen, goes home to a nice honey dinner, hangs out with 30,000 of her closest friends—this doesn’t sound like such a bad day.

But for billions of bees, life is a lot more complicated than that. Most of the hives kept by commercial beekeepers in this country aren’t kept primarily for honey, they’re kept for their pollination services. Bees are essentially treated as livestock. In early February, when the almond trees begin blooming in California, some 1.8 million colonies are trucked in from all over the country to pollinate a million acres of almond trees—more than 80 percent of the planet’s total. When that six-week bloom period is over, those hives are packed back up on tractor-trailers and hauled to their next location—watermelon fields, apple orchards, cranberry bogs.

The American Beekeeping Federation estimates there are about 2.7 million bee colonies in the U.S. today, two-thirds of which are on the move pollinating crops throughout the growing season

Imagine you’re a honeybee. You are exquisitely tuned to the place you occupy in space. On your first flight out of the colony, you hover in front of the hive for several minutes, setting an internal GPS that allows you to fly up to 5 miles away foraging for nectar and pollen, then find your way back unerringly to your front doorstep, even if that doorstep is on one of dozens of hives located close together.

Then one night, the hive is closed up, loaded onto a truck, and bumped along 600 miles of road to its next assignment. You’re unloaded into a new field, in a new climate, to pollinate a new crop. You arrive literally disoriented, and undoubtedly stressed.

Then there’s the diet of these working bees. Honeybees are generalist pollinators. That means they’ll visit many different kinds of plants, picking up pollen and nectar along the way. The variety in their diet is important to keeping them healthy, in the same way that variety in your diet helps keep you healthy.

Thanks to genetically modified Roundup Ready seeds, introduced in 1996, farmers can spray huge tracts of farmland with Roundup, killing all the weeds without harming the crop. Many of these crops, including canola, alfalfa and cotton, rely on trucked-in honeybees for pollination. Hives are dropped off for the duration of the bloom season, often in single-crop farmland that can stretch for miles in every direction. For the bees, this means a single-food diet, since there are no flowering weeds to provide variety. And that single food source has been sprayed with a chemical shown to weaken honeybees.

In essence, we have created a perfect storm of honeybee catastrophes. And it’s up to us to fix it. There’s probably nothing you can do about the problems faced by bees trucked from place to place for pollination, but there’s plenty you can do to help the pollinators in your own community:

Seed some clover into your lawn and let the dandelions live—your lawn will be healthier and the pollinators will be happy.

Keep chemical spraying to a minimum and if you must spray, do so in the evening when bees aren’t active.

Let part—or all!—of your yard go wild, with a variety of wildflowers that bloom throughout the growing season.

Find alternatives to herbicides. Combine a gallon of vinegar, a cup of salt and a tablespoon of dish soap to make a weed killer you can spray without guilt.