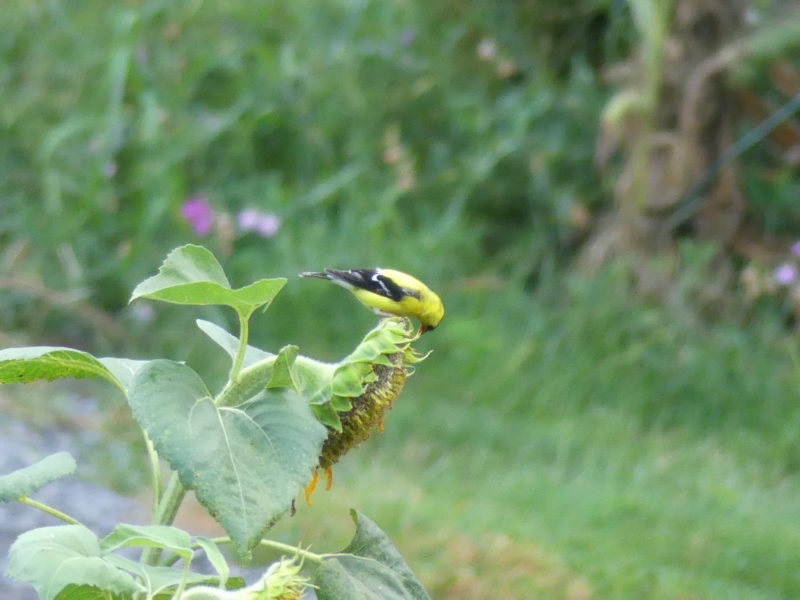 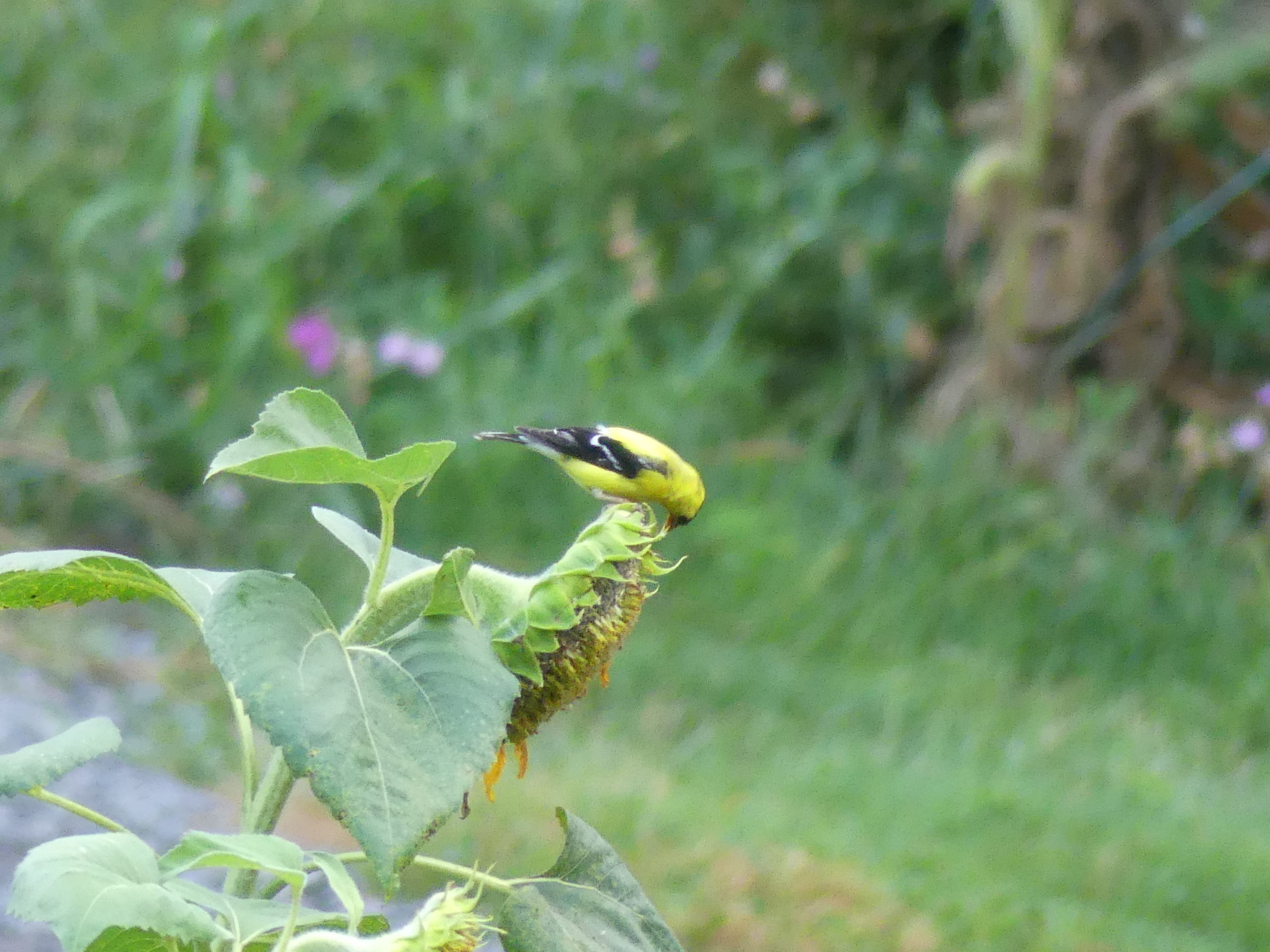 This male goldfinch and his companions feasted on several sunflower seed heads for a couple of weeks then moved on to the smaller Rudbeckia triloba flowers for more seeds. 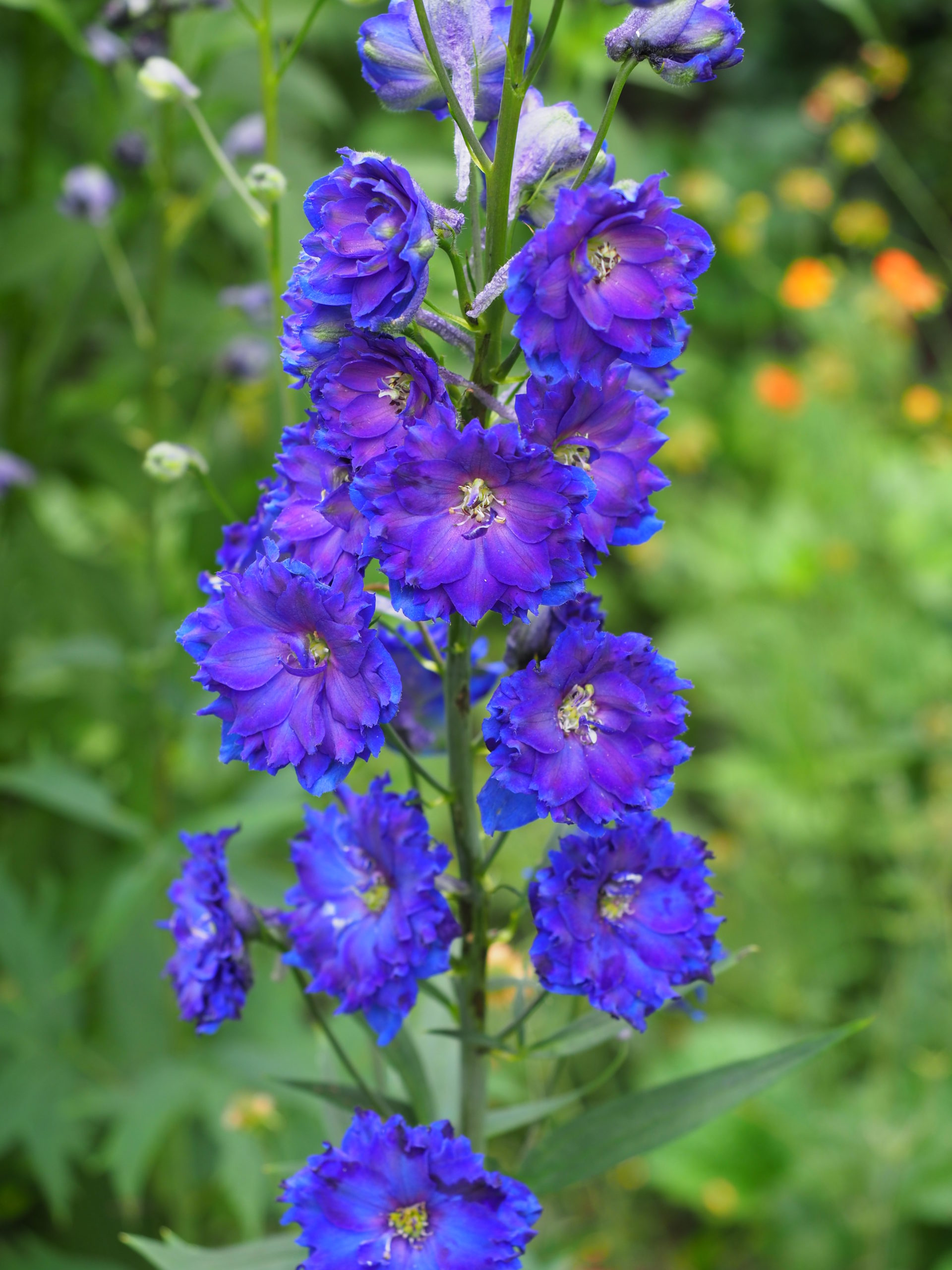 A Dowdeswell Purple Pagan delphinium was a summer surprise that I certainly gave thanks for in my 2020 garden. It flowered the first year from seed. ANDREW MESSINGER 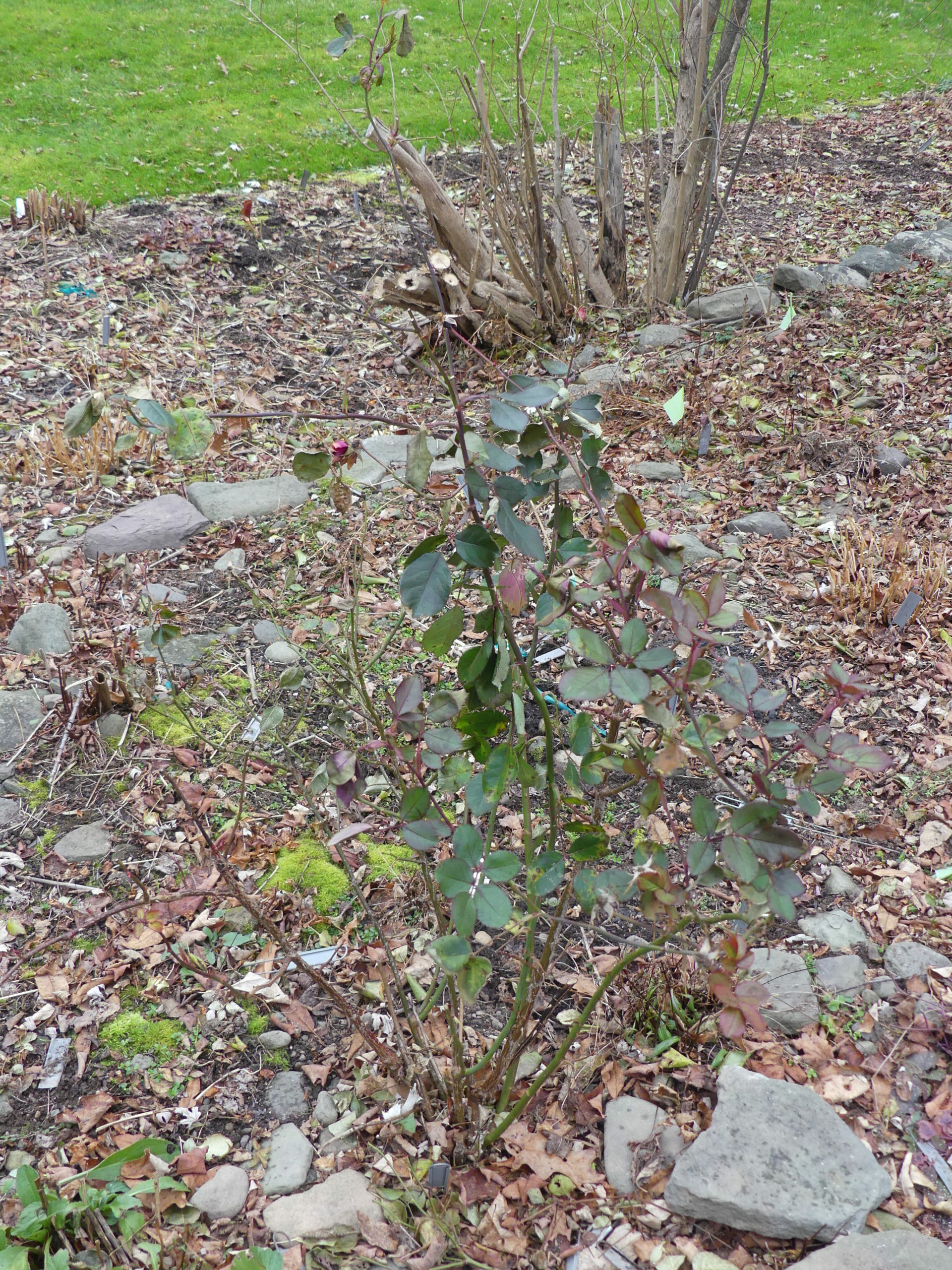 A cold and forlorn looking rose Oso Easy Double Red looks like it needs to be neatened up for the winter. Resist the temptation to prune roses back, though, as this is a late-winter or early-spring job. ANDREW MESSINGER 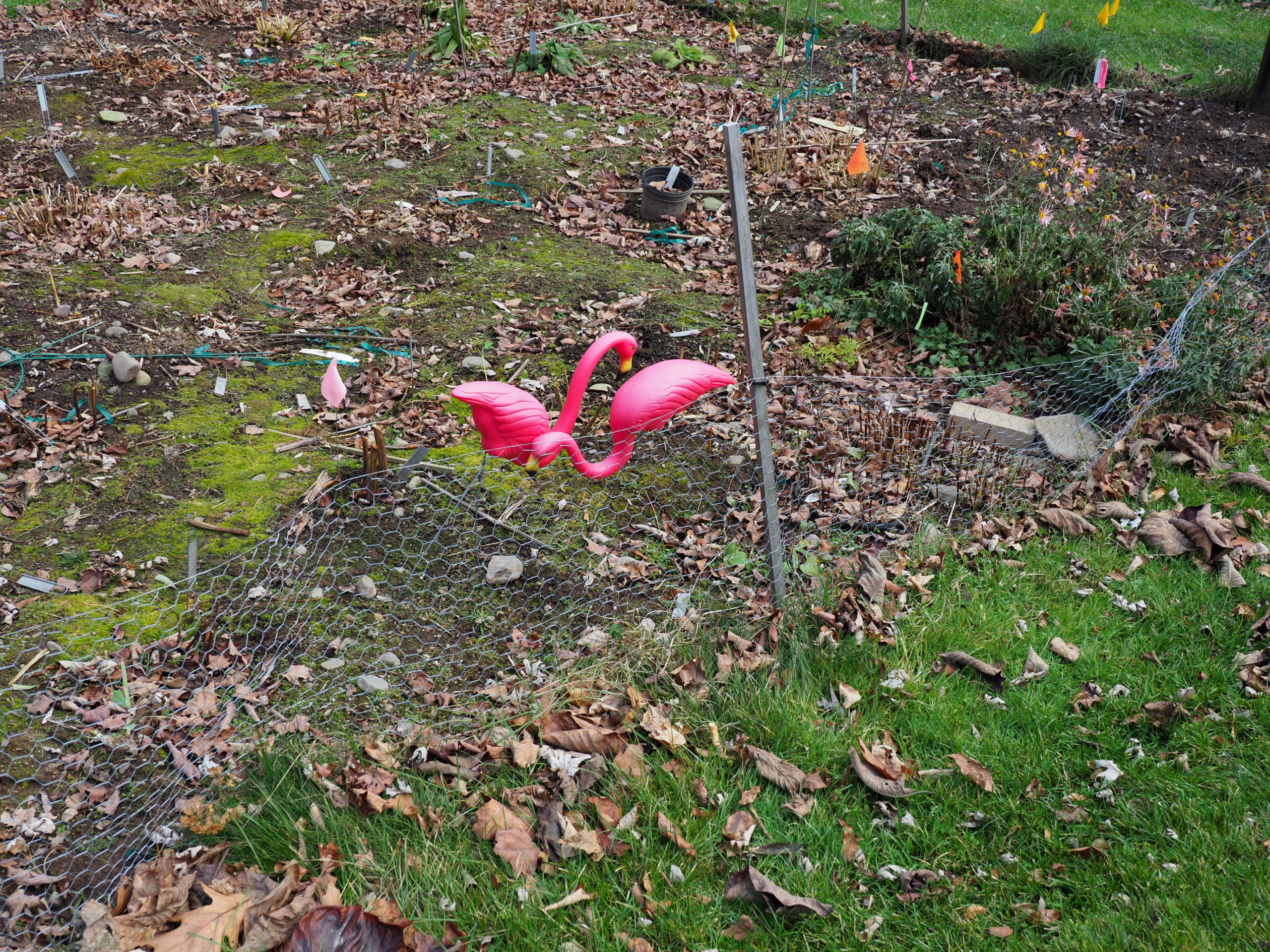 And now at the end of the gardening season, it’s time to bid the garden Flamingos a fond farewell and migrate them from the trial garden to the barn for the winter. ANDREW MESSINGER 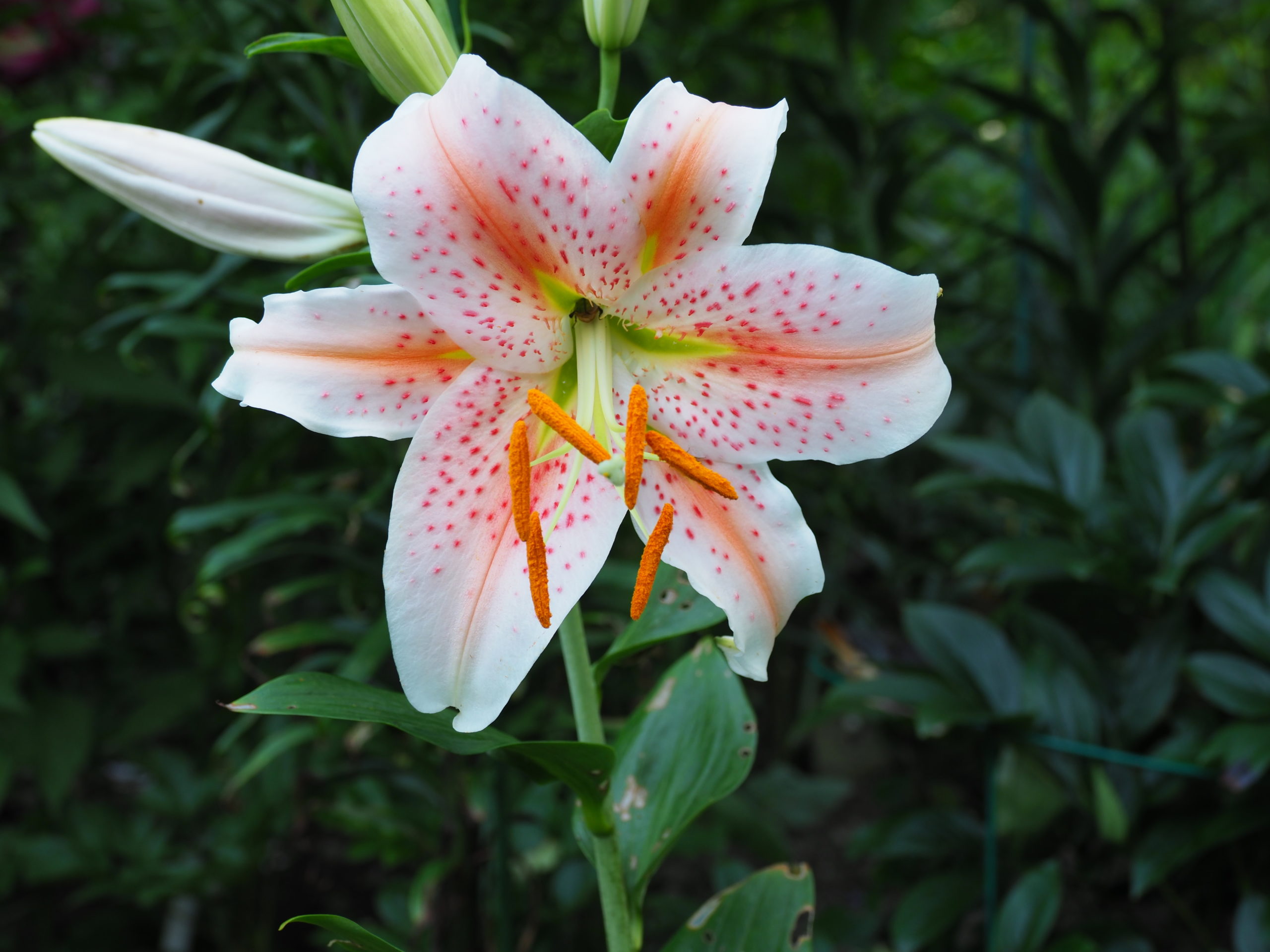 One of many dozens of hybrid lilies in last summer’s garden that excited my visual and olfactory senses that I give thanks for. ANDREW MESSINGER

It’s been the strangest if not the saddest year in many of our lives. The effects of the pandemic have been so wide and sweeping that the residue has leaked into not just our collective psyche but, remarkably, into our gardens — shortages of plants, shortages of tools, shortages of seeds and a new thirst for gardening answers and skills that many of you never ever pondered.

Aside from the personal losses of family and friends and the omnipresent fear that we, you, I may be next, those of you who ventured into the dirt and world of growing have had to deal with the challenges of bugs, weeds and plant diseases that you never, ever contemplated. In some small, or even large way, I hope this column has helped.

This Thanksgiving I am alone with my wife. The rest of our cumulative families are sequestered in Georgia, Texas and California. It all has left me occasional pangs of guilt though, because it has been one of the most incredible years of my seven decades of life.

I retired from dealing with and managing other folks’ gardens and estates about a year ago. It’s given me the chance to work on my writing as well as other horticulture projects, but it has also given me the first chance in my adult life to do nothing but work in my own garden. What an absolute delight. It’s been a long time coming, but I’ve loved every minute of planting, digging, weeding, watching and learning from every single seedling to trees leafing out and every single bug, bird and an assortment of diseases and yes, the hummingbirds that allowed me to watch them and learn about them hours on end. In spite of the pandemic and political treachery, it’s been the most amazing year of my life. In my garden. I give thanks.

We are now in those rarefied moments between the end of this year’s garden and the beginning of next’s. We usually take a break, but this year I fear that nurseries will again be hit with labor shortages that will lead to short supplies on some plant material. While seed houses are well stocked, the reports of early orders portends the chance of early sell-outs. So, while we may be weary and tired, there’s no rest for those wanting the seeds and plants that were in short supply this last year.

Gracious Gardens is offering discounts on many early orders, Bluestone Perennials is offering a discount on gift cards (no guilt in gifting to yourself please), Burpee is emailing me every day or so to place my seed order and Johnny’s tells me in their emails that they’ve chosen a number of items “Just for you.”

Go online, get your orders in. Take advantage of early discounts and the possibility of actually getting things before they sell out. For those of you who failed to plan your gardens next year we’ll get into that in the weeks to come so you can be as productive as possible and learn how to plant your veggie garden so as crops mature you can put that garden space right back to work.

First and foremost, remember your mistakes or you’ll repeat them.

My biggest mistake of last summer’s garden was in planting the tomato Sweet 100. Tomatoes are never easy, but I really blew it on this one. My father used to grow this variety in his garden, and I have fond memories of this little tomato that was sweet beyond belief. I had forgotten the adage, though, that you can never go back. I had also forgotten that this tomato was an indeterminate type. That means that it grows, and grows, then grows some more until the cold stops it. I’d planted three small 4-inch plants, and by early August the vines were a dozen feet long and, in spite of staking, they took over a space of about 15 feet wide and 18 feet long. They smothered my basil, hid several perennials and essentially played havoc in my trial garden.

Sweet 100 was also a magnet for whitefly, but any tomato has that nasty quality. While the plants produced pounds and pounds of red orbs, they were nowhere near as tasty as my memory had teased. Yes, indeterminate tomatoes will grow and produce well beyond their determinate cousins. But even with pruning they can be tenacious explorers with ever-wandering stems and to my surprise, root systems to match.

This isn’t to say that determinates are better. Indeterminates have a much longer fruiting season and can be much more productive.

Tomatoes rarely taste the same from year to year. Choose your types carefully and don’t rely on your memory for outstanding taste. If you choose to grow them, there’s merit in trying at least one new variety every year. Just don’t expect it to be the same in terms of taste the following year.

Basil was a very different story. We go through a lot of it, so I had a backup for the plants that Sweet 100 had dominated. It was a simple Italian basil (Genovese) that I’d found at a market for about five bucks in a 2-gallon container. It found a home near the kitchen under a stand of white birches that gave it just the right amount of sun and shade. I watered it regularly, pruned it to encourage new growth while ensuring it continued to produce growth that could be cut and used. It thrived and survived for months until our first frost. More on basil in the coming months as well.

Nancy Bell is a gardener who helps me out at home when things in the gardens just get overwhelming. She mostly works with me late in the spring at planting time then again in the fall during cleanup. At cleanup time this year she chided me for cutting down many of my plants that had gone to seed: Echinacea (purpuea species to be exact as these are great seed producers where the hybrids are not), Rudbeckia triloba and a few other plants. A number of birds feed on these seeds, including a persistent flock of goldfinches.

Nancy was right. And since the flowering season was gone, it really didn’t matter to me that things looked a bit untidy. Seed heads were left until the birds had their fill and then everything was trimmed down. The downside is the seedlings that will show up next spring from the seeds that dropped to the ground. But Nancy is a great weeder. Keep growing.

Don’t leave your hoses out until it gets cold again. They are really difficult to coil and move once it’s in the 40s and below, no matter what it says on the label about always being soft and pliable. If they have bad kinks, broken connections or holes, now’s the time to get replacement parts and mending kits. Make sure you have the right size replacement parts and try to avoid plastic parts.

Continue to weed the gardens. The warm days of November and December will allow some weeds to germinate, and they are so easy to pull now. Also watch for sprigs of grass that are coming up in the garden. These can be from seeds blown in or from rhizomes and tillers reaching underground from lawn areas. Easy to pull now, so take care of them before they spread even more.

Avoid the temptation to prune your roses. Most should be left alone until late winter or early spring, unless there’s cane damage. The exception is the Rugosa rose, which can be hard pruned in the winter to encourage branching and lush growth next summer.

Your first application of liquid deer repellent can go on any time from early to late December. Choose a warm(ish) day with no rain forecast for the following 24 hours. No matter what the label says, plan on repeat applications later in the winter.