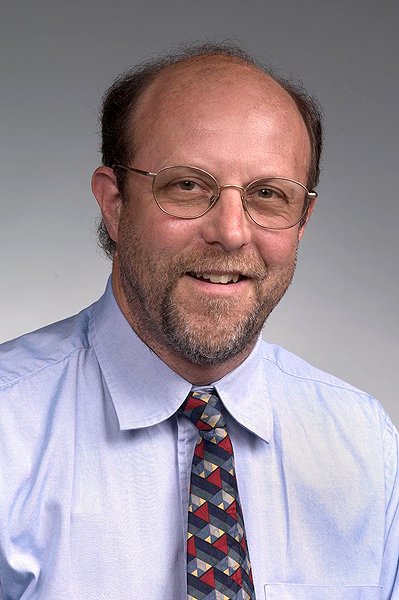 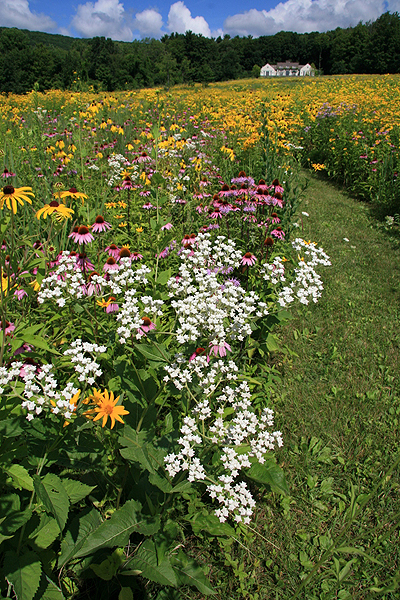 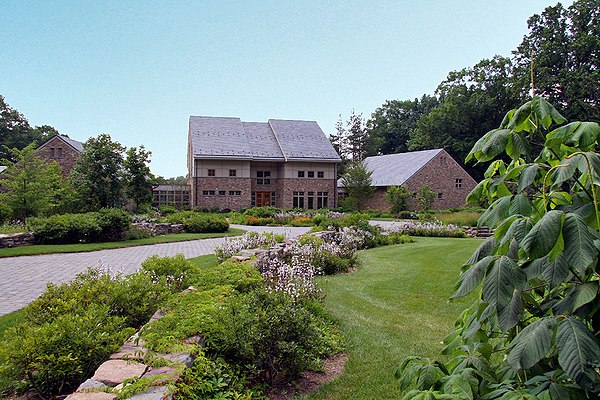 In the Saucon Valley in eastern Pennsylvania, bottlebrush buckeye in the foreground and white-flowered penstemon are part of a border along the driveway. Across the drive a grove of oaks and hickories creates shade. LARRY WEANER 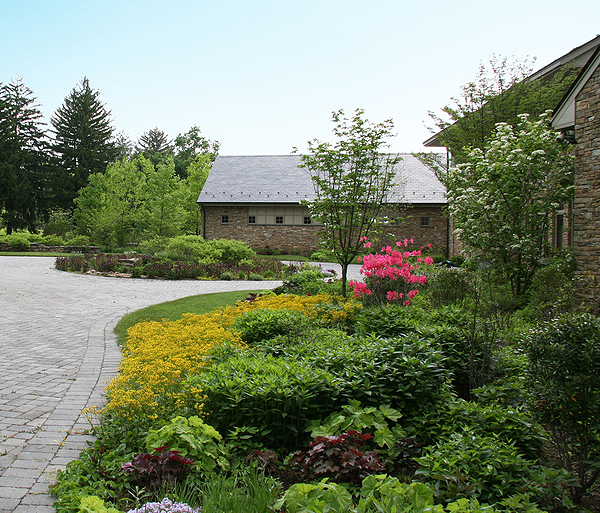 In the Saucon Valley in eastern Pennsylvania, a limestone-based soil with a higher pH is home to golden groundsel, a brilliant pink native azalea and white-flowered Viburnum trilobum. LARRY WEANER 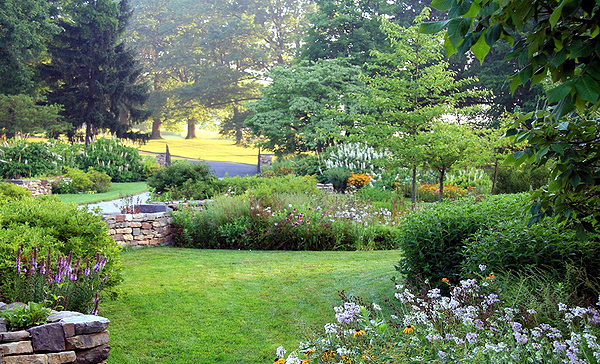 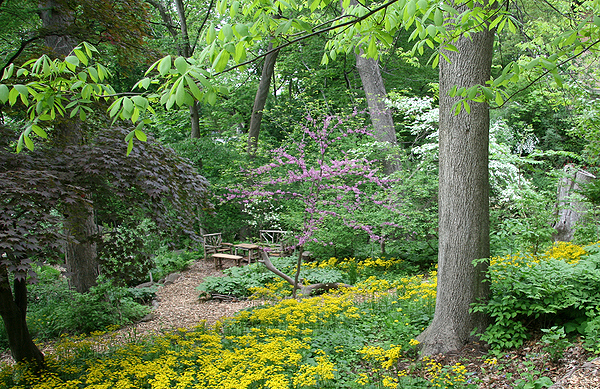 At a shady site, yellow golden groundsel (packera aurea) carpets the ground beneath a hickory, with purple-flowered redbud and white serviceberry trees, and green mayapple covering the ground farther back. LARRY WEANER

Native plants offer the promise of gardens that naturally thrive and are a snap to maintain.

In a shady place, plant a woodland garden. In a flat sunny spot, plant a meadow.

But there are times when native plants can go wrong, such as when planting a wildflower seed mix, which provided a delightful meadow full of flowers one summer, but a few years later yielded only a giant patch of weeds. So what happened?

Native plants can indeed offer a way out of high-maintenance, chemical-dependent landscapes. But it’s important to match the plants to the location. And there’s more to that than putting sun lovers in the sun and moisture lovers where the soil doesn’t dry out.

The key to success, landscape designer Larry Weaner told the members of the Horticultural Alliance of the Hamptons during his “Breaking the Rules: Ecological Design for the Real World” talk at the Bridgehampton Community House on Sunday, is to first thoroughly understand the characteristics of the place you want to plant, then to find plants that come from the same kind of environment.

As head of Larry Weaner Landscape Associates in Glenside, Pennsylvania, Mr. Weaner has been creating native landscapes around the eastern United States—including on Shelter Island and various Hamptons locations—for 35 years. His work blends ecological restoration strategies with traditional fine garden design techniques. He has found that observing how plants grow in nature can reveal relationships that can lead to new gardening methods.

“What goes on in nature?” Mr. Weaner asked. Why do some plants turn into one thing and others into something else?

The answer, he said, is that plants form communities in which they fill different niches. Some are taller, others are shorter and thrive in the shade of the more vertically gifted plant. Some bloom in spring to attract their particular pollinators, others flower in summer.

Plants in different niches complement one another and form a flourishing system. To create a successful garden of low-maintenance native plants, “you need to understand the inclination of a site,” the landscape designer explained, as well as a knowledge of how the members of the plant community grow and interact over time.

“Just because you trade a Japanese azalea for a native one doesn’t make it work,” he said.

A great difference between plants growing in a garden and those in a natural habitat is that plants in a garden don’t have to compete to survive, but plants in a habitat do. In a garden, gardeners pull the weeds, kill the bugs, provide water when it’s dry and add fertilizer, too. Plants in a habitat must find their niche in the community and must be able to survive in the level of sunlight their habitat receives, the type of soil it has and how much water there is. They also have to survive over time as the community changes.

For example, the first plants to colonize a place after the site is disturbed, by a fire or other event, are generally annuals. The annuals grow for a season, produce seeds and then die. They are then replaced by perennials that are slower to get started but last longer.

All habitats change as different plants succeed one another. When those first annuals die, they leave their seeds behind, waiting for the next disturbance that will enable them to grow once more.

It’s better to understand the habitat, and work with it rather than try to change it. For instance, Mr. Weaner explained, some plants, such as butterfly weed (

When a well-meaning gardener improves the soil and changes the natural habitat, the plants will no longer thrive. But, he said, the weeds will. That little bluestem stands up straight in the wild, but when it’s watered and fed in a garden it becomes gangly and floppy.

“It’s important to know what habitat you have,” said Mr. Weaner. “And you can’t get that from gardening books.”

When he begins a landscape project, Mr. Weaner first studies the geologic and climatic conditions to gain a thorough understanding of the habitat, he said.

To facilitate a successful community of native plants on a property, the keys are to first understand the habitat, and then to use plants in the garden the way they grow in nature. Depending on the size of the property, there might be several different habitats, each with a different community of plants.

This is the study of a lifetime for someone like Mr. Weaner. Over the years he has found himself becoming part of a like-minded community, he reported.

When he started his company in 1977 he felt very much on the radical fringe of landscape design, he added. But that has changed.

“I felt like the man in the moon, but not anymore,” he said. “More and more homeowners now are looking for landscapes that are more sustainable and supportive of the environment, especially in places like the Hamptons where the way we live is taking such a toll on the environment around us.”

Toward Lower Maintenance  In The Garden

Most gardeners don’t have 35 years to devote to learning about the qualities of the habitats present on their properties but anyone who lives in a place and gardens there over time comes to a better understanding of the conditions of the property. Gardeners notice things. Gardeners experiment.

To transition your home grounds to a truly sustainable landscape of native plants will most likely require the assistance of a professional such Mr. Weaner. But there are steps that can be taken to move in that direction.

“The most important thing you can do to reduce maintenance on your property is to plant a dense native groundcover,” he advised. Once planted, intermingle that with other plants from the same habitat.

Combining plants will help with the deer problem too, he said. Deer don’t like to work all that hard for their dinner, and won’t usually take the time and trouble to pick through a densely mixed planting to pick out the plants they like, according to Mr. Weaner.

When his team plants in deer country, he said, they “put two plants in each hole—one the deer like and one they don’t.” As the plants grow up together, the deer generally avoid them both.

In home landscapes and gardens, Mr. Weaner suggested hiding deer favorites inside or behind a border of plantings they don’t like. Put the hydrangeas behind a barrier of hypericums, perhaps.

Despite best efforts, if the garden is overrun by invasive weeds after a few years, it might be time to create a “disturbance” and try again, the landscape designer said.

“You can kill anything by cutting it back repeatedly,” he said.

This approach will even work with the intractable phragmites, though it can take several years of repeated effort. Mowing sets back the natural succession of plants, he explained. If you can control the invasives by mowing, the natives will probably come back. And then the process can begin again.