Grow Figs In The Northeast - 27 East 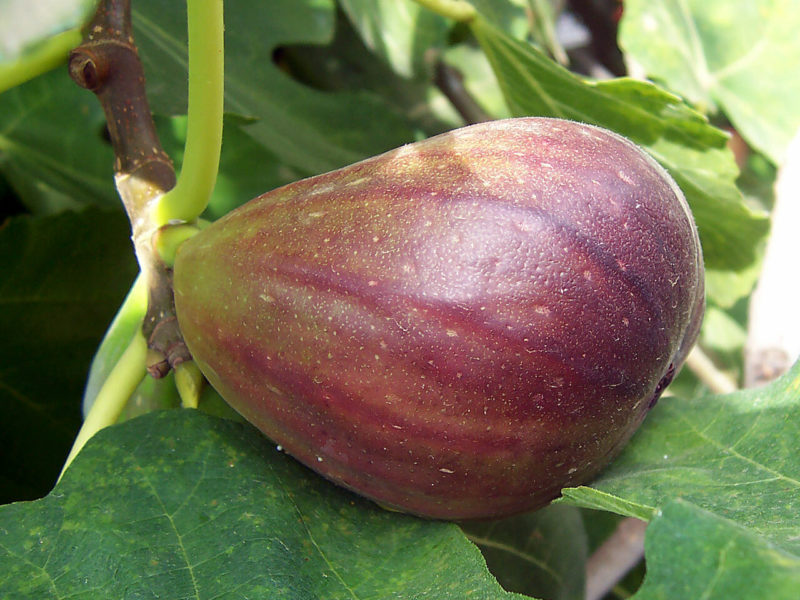 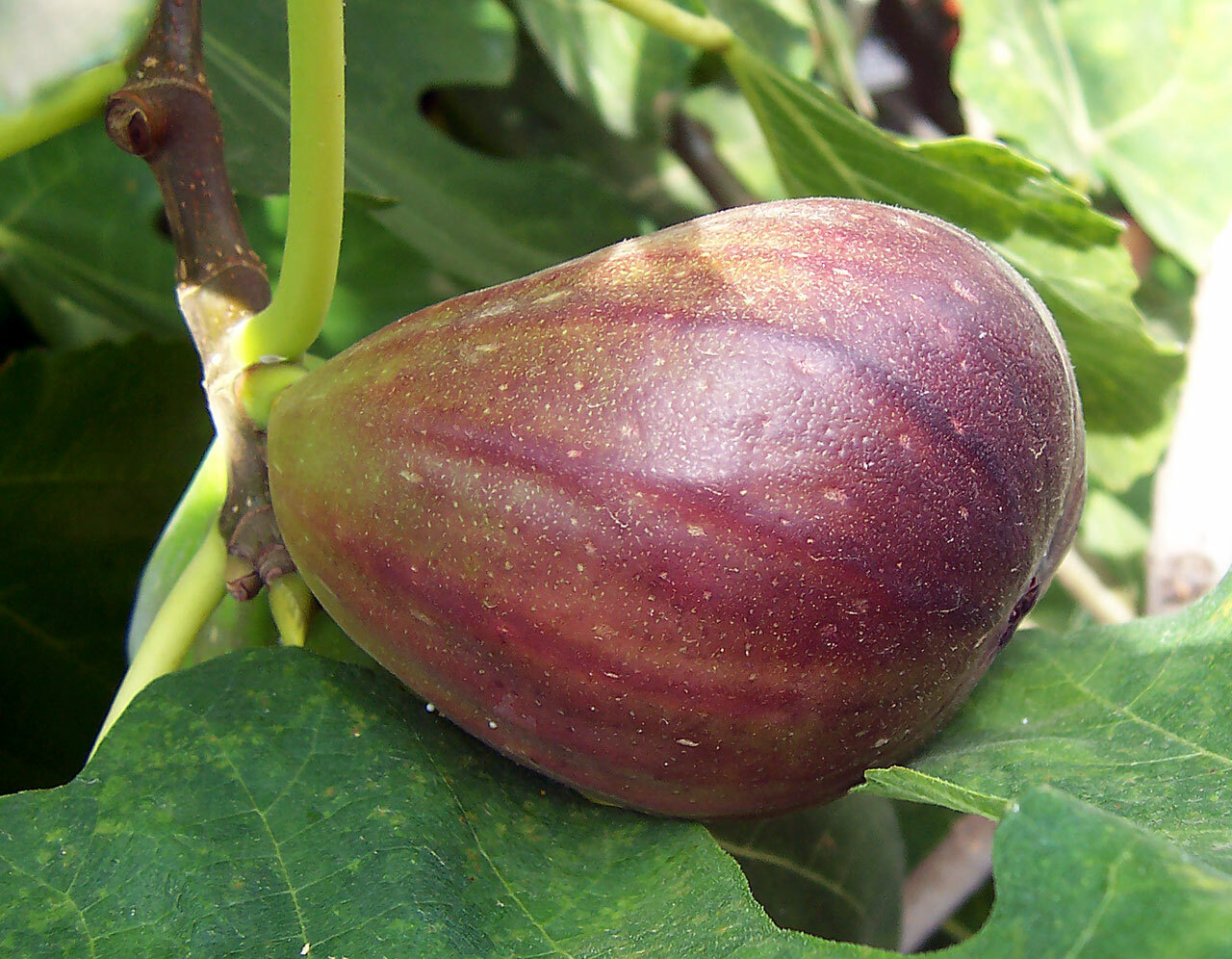 As this fig begins to ripen the color changes from green to a purple-brown then when fully ripe this variety turns totally brown and begins to slightly shrivel, which is normal. COURTESY FIR0002/WIKIMEDIA COMMONS, GNU FREE DOCUMENTATION LICENSE 1.2 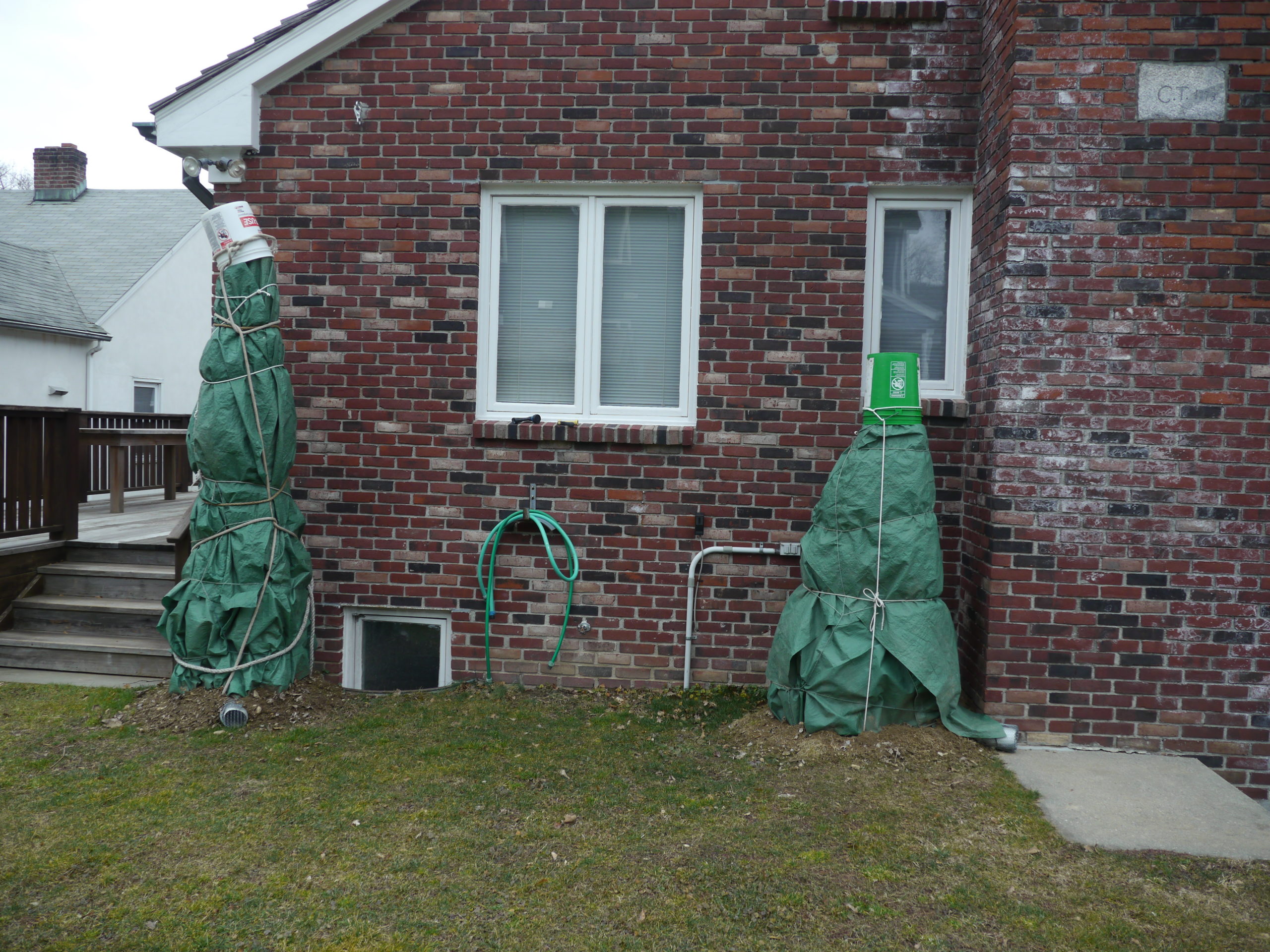 These two fig trees are planted right up against the south face of the house. This spot warms up early in the season and the mortar and concrete from the house brickwork and foundation keep the soil pH above 6 and alkaline, which the figs need. ANDREW MESSINGER 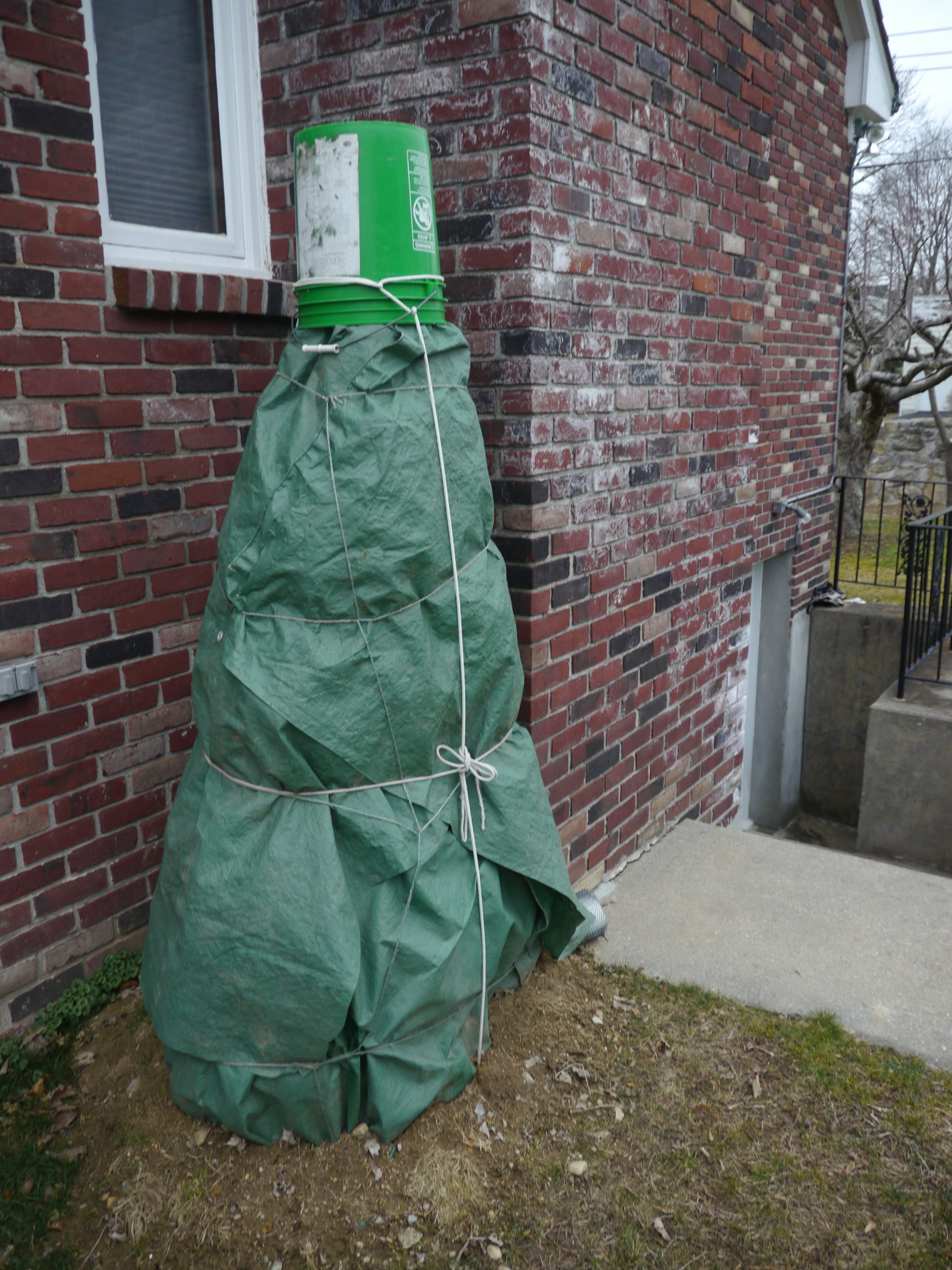 This fig was wrapped in late fall with a light green tarp while the tree is surrounded by salt hay and leaves for insulation. Note the way the tarp is tied so it won’t blow off. The bucket on top keeps rain from getting inside the sarcophagus to limit moisture and winter rot. ANDREW MESSINGER 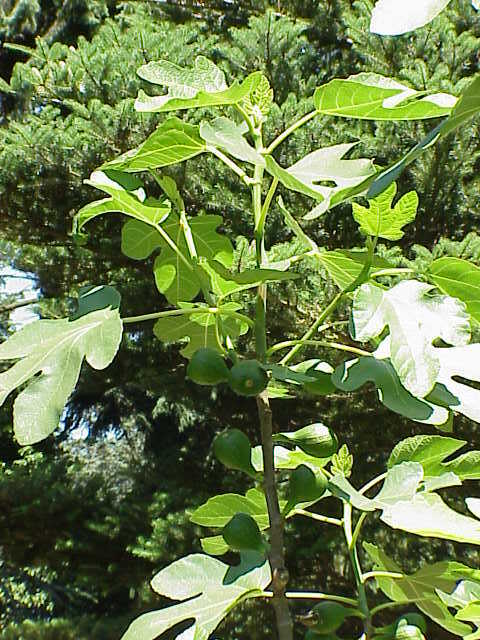 A hardy fig tree can grow up to ten feet tall but should be pruned back early in the season to around 8 feet. Most varieties will have green fruit during the summer that turn brown and soft when ripe. COURTESY KURT STUEBER GNU FREE DOCUMENTATION LICENSE 1.2 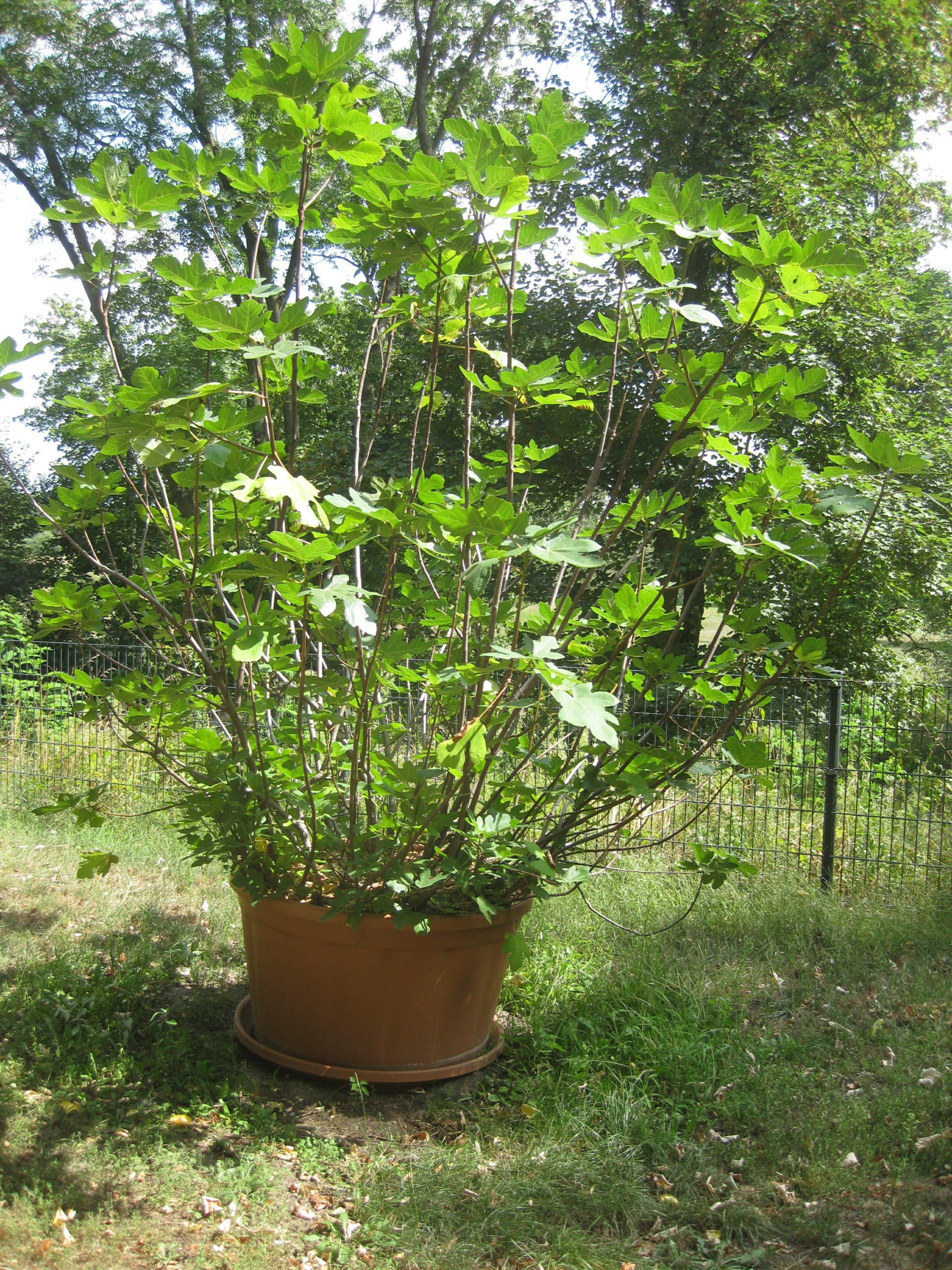 Figs can also be grown outdoors in containers then brought in at the end of the season. The tender varieties can fruit twice if brought in soon enough and not subjected to cold nights or frosts. COURTESY WILHELM ZIMMERLING PAR/WIKIMEDIA COMMONS, CC 4.0

The number of unusual and exotic fruits that you can grow in our area is remarkable, and their names conjure images from a Persian fable: persimmons, kiwis, golden raspberries, figs and — with climate change accelerating — it won’t be long before citrus and even banana plants may overwinter in some local protected gardens.

Like golden raspberries, fresh figs represent rare gems among fall fruits. They are hard to find in supermarkets or even greengrocers, as they are mostly grown far away. They don’t travel well or store well unless they’re dried. But they are unrivaled as a sweet treat and should be considered by any gardener who values fruit and has a sweet tooth.

My first experience with figs was in my father’s garden on the North Shore, though he didn’t fit the traditional fig grower profile, having no Greek or Italian ancestry. It must have been the horticultural challenge that spiked his interest or his Italian gardener. Back then, in the mid-1950s the winter months were much colder. That, as well as wet soil in the winter, can doom these heat lovers.

Although not native to our area, figs have been grown around here since immigrants from Italy and Greece brought them to our shores centuries ago. And while some varieties can prove to be reliably hardy with protection, the most challenging aspect of growing them in these parts, and keeping their production up, is in keeping the plants strong and vigorous from year to year. With the right plants and a few noted horticultural practices, even that isn’t all that hard. You can also expand your fig collection by growing the less-hardy varieties in containers that can overwinter in a cool garage or maybe a garden shed.

Figs like poor soil, and we’re in luck. Planting them in a rich, organic soil that will hold lots of moisture is a death knell. In Greece, they’re grown on solid limestone hills, and they’re never fertilized. Our generally acid-to-neutral soils can be an issue, but when grown close to a home, where the soil is usually pretty poor, and on the south side, which is the warmest, the lime leaching from the cement and foundations walls can create an alkaline situation, which the figs adore. In other places, the pH of the soil should be kept above 6 for good production.

Proximity to the south side of a house satisfies the other requirement of this fruit: plenty of sun and warmth. The south side of a house will reflect heat onto whatever grows near it. Figs prefer dry heat, but they will tolerate our maritime humidity. Soils should not be amended with fertilizer but they will appreciate a small amount of organic matter (compost) worked into the sandy soil. A small (note small) bit of lime and some well-rotted manure or compost added around the tree each spring is all the fig will need as far as nutrients go. And don’t plant acid-loving shrubs like hollies, azaleas and rhodies near your fig as the soil requirements are directly opposite.

Depending on the variety and exposure, a fig tree in this area can grow from 6 to 10 feet tall, but it can be pruned back to 8 feet if necessary. They have soft, flat, lobed leaves that have a texture similar to that of a large magnolia leaf. The wood is soft, not unlike a lilac, and some gardeners have been able to grow them in tree-like forms or espaliered, growing in a symmetrical form flat against a southerly wall.

Most local garden centers carry one or two hardy varieties of figs and you can find a couple more online. Now is the time to order them, as shipping will start in April and planting should be done during May. Plants purchased locally may show up later than those that arrive by mail and should be chosen for their size and age as well as for the variety. Potted plants that are at least 2 years old are the best when purchased locally, and they should be planted as soon as garden centers have them.

Don’t expect fruit the first year and maybe not the second. In fact, it’s not an uncommon practice to remove any developing fruit the first and possibly the second year so the plant puts its energy into root and shoot formation and not the fruit. Depending on the variety, they will produce fruit once and possibly twice a year if the season is long and warm with crops coming in late summer and again the fall. Late-ripening varieties may not ripen until late October or November, running the risk that a cold snap or frost will damage the later crop.

The plant’s sensitivity to cold has earned it a reputation for being difficult, but there is another factor that can cause problems and that’s wet soil in the winter. For this reason, it’s worth reiterating that good drainage and poor soil is a blessing for figs. But even in a bad winter the plant is rarely, if ever killed. At worst it will just die back to the ground and much of the shoot system can be lost but new shoots usually emerge from below the ground (patience please) and only a year’s effort is lost. It’s usually a prolonged spell of 10 degrees or lower that will harm the plant, but after one or two warmer growing seasons the shoots will appear once again.

Sometimes, I’ve found that the reason for winter damage is not really the winter but an ill-informed gardener who has planted California Brown Turkey instead of Eastern Brown Turkey, which is the hardier of the two.

However, if you do encounter winterkill or dieback, a mass of new canes will emerge when the soil warms. These canes should be reduced to just the four or five strongest canes, thus allowing light and sun into the center as the plant fills out through the summer. Fewer, stronger canes encourage heavy fruiting while a lush mass of foliage can look unsightly and result in few fruits.

The fruit is formed where new foliage shows up, so each year, as the tree grows, this new growth is where you’ll spot the figs. This is another reason for periodic spring pruning. In the spring, before the leaves begin to grow, snip back branches that are too close together and snip off any frost damage. In the summer, pinch the tops of leaf clusters to encourage branching. The plants are self-pollinating, so if space is tight, you only need one.

If a fig is grown in an unprotected area it can either be grown in a pot and moved into an unheated garage for the winter or it can be wrapped with burlap and stuffed with straw or hay. Some wrap their figs with plastic, but clear plastic should be avoided as this allows for a greenhouse effect and excessive winter warming and moisture accumulation under the plastic. A lightweight green tarp might be a good option as is white plastic, which reflects the light and thus the heat. The covered plants are the fig sarcophagus that you often see in some yards in winter.

If you want to add different flavors, colors and textures to your fig collection, try some of the less-hardy varieties that you’ll take in during the colder months. Logee’s in Connecticut (logees.com) has about a half-dozen varieties, both hardy and tender, that ship in 4-inch pots. These can be planted in larger pots then moved into containers that can be moved inside for the colder months. There’s the yellow-skinned Ischia, which has a reddish fruit interior. The fruits are about 2 inches in diameter and can be eaten fresh or dried for use later in the year. And since you’ll be moving it indoors, if you continue to let it grow it may fruit twice. Also check out GE Neri and Letizia. Petite Negra has black fruits, and it will begin to bear when the plant is only a foot tall.

A number of options here, with the chance to extend the season by keeping the tender varieties on a porch or balcony then bringing them in late in September. Just remember not to coddle the hardy types and don’t assume that all is lost if they die back to the ground in a hard winter. With patience, they almost always come back. Keep growing.