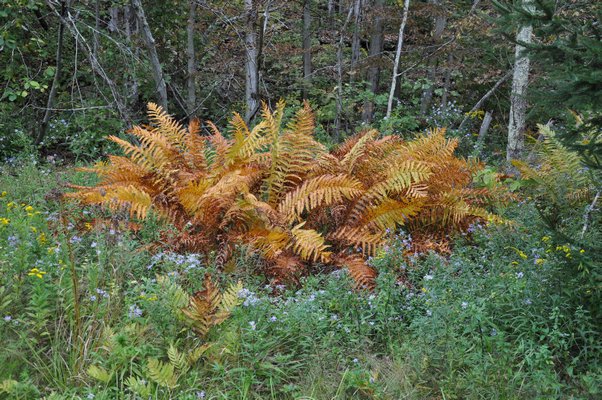 Again, the importance of knowing what your ferns will do as the season progresses. In this shot the same ferns have taken on their fall colors and the surrounding wildflowers are now different species than in the spring but still all the contrast of the yellows and blues seen in the spring. ANDREW MESSINGER 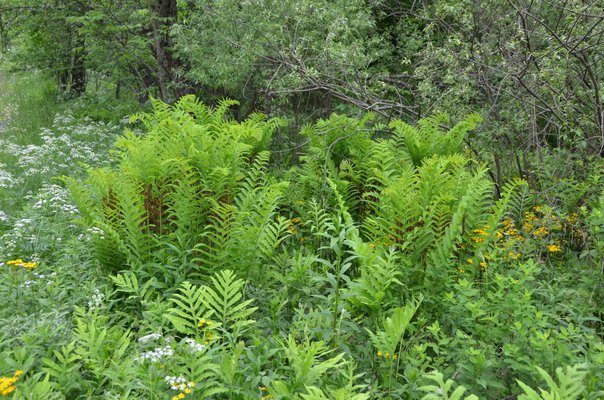 Look at ferns in the wild before you plan your fern garden. Here, the taller ostrich fern is in the background and the sensitive fern in the foreground. Note the spring wildflowers that add to the color palette. The ferns in this shot range from 2 feet to 4 feet tall. ANDREW MESSINGER 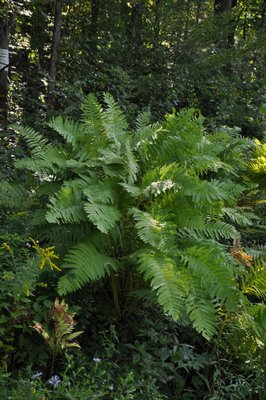 The ostrich fern is one of the most popular, but it likes to spread and move about the garden so it has to be ‘managed.’ In the wild it can grow as tall as 6 feet like this one, but in cultivation they are usually 2 to 3 feet tall. Note the fertile fronds of a different fern with brown on the backside of the frond to the lower left. The brown area is where the spores are formed. ANDREW MESSINGER

I like to be challenged by my plants, and that doesn’t mean they have to be hard to grow.

The challenge I look for includes form, function and adaptability, and each one of these areas translates into where plants will fit into the garden and landscape–no matter if the setting is man-made or naturally occurring. With these thoughts in mind, there is a family of plants that we rarely give much thought to and yet the hardy ferns are pretty damn amazing in form, function and adaptability.

Ferns are unlike any of our other plant families if only because they don’t flower. But theres so much more to them than that bloomless facet. They have incredibly complex reproductive lives going through 12 different parts of their life cycle that can include up to 21 different developmental stages. And yet, when many of us look at them, all we see are fronds.

Gardeners often overlook hardy ferns because they don’t know of this plant’s incredible diversity. Some have four seasons of appeal from their first emergence as fiddleheads—many of which are edible—to the ones that have spectacular fall colors. And, yes, the ones that are evergreen through the winter. There’s one that’s a climber, while some are invasive like weeds. Think they only grow in shade? Actually, there are four varieties that grow in full sun. There are about 25 that are evergreen, at least 10 that prefer wet places, three that prefer dry places, six that thrive in acid soils and 17 that will grow in limestone rock and soils. I even know of one that only grows in an ever-widening circle, creating a doughnut of ferns, and there’s even an aquatic fern.

So this week and next week, I thought we’d take a little trip through the ferns with the hope that you’ll find this plant family as incredible as I do. We’ll look at the natives as well as the cultivated or introduced types. By the time our trip is done, I think you’ll find that there’s a hardy fern for so many areas of your garden that you’ll want to include them in your planting plans. They’re easy to care for, are not prone to deer browsing and—for those up to the challenge—you can learn to grow them from spores and have hundreds of them for just pennies.

There are roughly 50 different fern species that have been found on Long Island. But remember, Long Island is, well, a long place with extremely variable soils from rich and deep loams to sand and woodlands to pine barrens to sandy beaches. Ferns can be found in all these places, but many are very site specific in terms of adaptability. So a fern growing in Oyster Bay may not be the one you want in Sagaponack. There are also non-native ferns that can be grown on Long Island as well a cultivars, or ferns developed by man through selective breeding. The ferns we use in our gardens and woodlands can be tall, short, smooth and rough, green or with hues of silver, reds and burgundy, as well as shades of yellow later in the season.

The first non-native fern I planted was a Japanese painted fern, or Anthyrium nipponicum var. pictum. This was a short fern with silvery foliage that took up a space of about a square foot. I found that it could be divided every few years, and in time different color variations were introduced such as Regal Red, Burgundy Lace and a striking beauty simply called “Ghost.” There’s also a variety called “Joy Ride” that belongs to a group called the crested ferns in which the foliage splits at the tips in a very un-frondlike adaptation. There’s also a great deal of diversity in the sizes of the Japanese painted ferns with the smaller ones only growing a foot tall and the larger ones getting up to as much as thirty inches.

For brilliant fall color, there’s no fern quite like the autumn fern “Brilliance.” This is a newer introduction of the autumn fern (Dryopteris erythrosora) that grows to just over 20 inches and tolerates some sun, some shade or full shade. It starts off with glossy green fronds, but in the fall as things cool off, the fronds put on a color display of coppery red, not unlike some maples. So for years, it can be quite spectacular.

Most local garden centers carry a half dozen or so fern varieties. If there’s a specific variety you’re looking for, ask around. Mail-order nurseries such as Bluestone Perennials carry about a dozen, Plant Delights has close to 30, and Fancy Fronds has well over 50 selections.

Kick it up a step and learn how to grow your own hardy ferns from spores. I took a class at the New York Botanical Gardens a number of years ago, taught by Mobee Weinstein where we learned all about native ferns, including how to grow them from spores. It’s a little tricky and needs to be done in a sterile environment. But once you have the knack, it can be lots of fun. I was able to get the routine down and do the process in my kitchen—so it can be done. One of the best sources for spores (and fern information) is the American Fern Society, which maintains a spore inventory that’s updated regularly. Check out their site at amerfernsoc.org.

In all my years of growing ferns and observing them in the wild, I’ve never noticed an insect or disease problem. Deer seem to ignore them. While I’ve observed an occasional slug or snail pass over the foliage for some reason, they don’t seem to stop and dine. The biggest issue is when ferns preferring dry locations are kept wet and when ferns preferring damp locations are allowed to dry out. There’s usually no need to feed them when they’re grown in native organic soils, but an occasional feeding with an organic such as kelp or fish emulsion can’t hurt. Chemical fertilizers will burn them and they can be very sensitive to herbicides and insecticides, even when used nearby.

There is a great website where you can see and read about many of these ferns as well as learn about fern identification. You can check it out here https://bit.ly/2VbWZ5a. And if you come back next week, I’ll review many of the fern groups that you can grow from Moriches to Montauk. Keep growing.