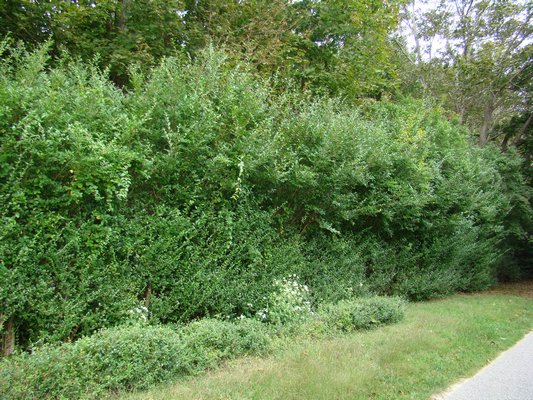 A Hamptons privet hedge gone wild. Not clipped in at least five years, this rampant hedge will take two to three years to rejuvenate and be tamed again. Winter pruning of privetcan be quite successful for rejuvenation. ANDREW MESSINGER 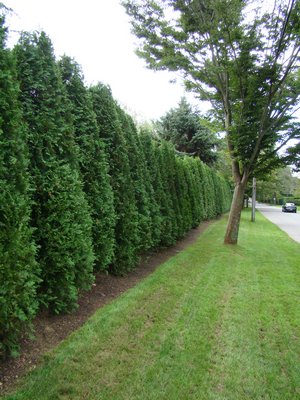 Several years after planting, this arborvitae hedge has filed in nicely and its laterals have filled out, increasing the density between each plant. Still needing annual maintenance, arborvitae is less labor intensive than privet. ANDREW MESSINGER 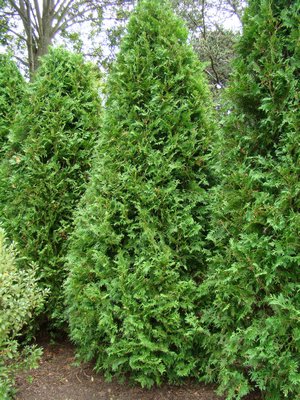 Several varieties of arborvitae can be used at hedging, but it is much less forgiving than privet. ANDREW MESSINGER 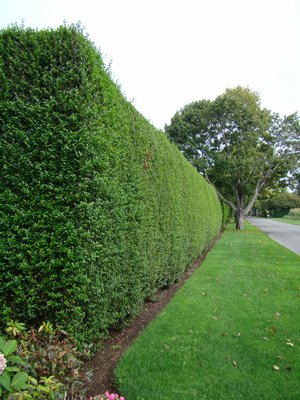 This is a well maintained and closely cropped row of privet hedge in Southampton. Note that it’s slightly tapered toward the top. This hedge remains often into early December, and due to its proper shaping, it’s not susceptible to snow damage. ANDREW MESSINGER. 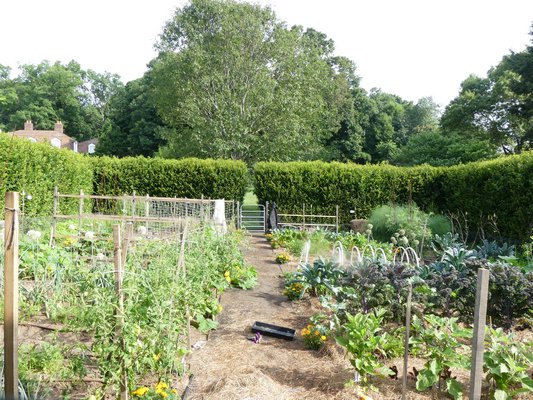 This estate vegetable garden is hidden from public areas of the property by a clipped hedge of American hornbeam. The hedge has proved to be deer proof but needs an annual clopping to bring in the sides and reduce the height by about 2 feet, it’s annual vertical growth. ANDREW MESSINGER

If Robert Frost had lived in the Hamptons, one of his most famous poetry lines might have been about hedges instead of fences. And it might have read that better hedges make for better neighbors.Between Westhampton and Montauk there are probably hundreds if not thousands of miles of hedges, and they run the gamut from tightly clipped and well manicured to free form and open. In some cases though, they’re just downright sloppy and crude. In each case, reflecting the mood and style of not only the owners who live behind them, but the community style as well. In the majority of instances, you’ll see privet (and the cottage industry that has developed around sheering and clipping them each summer) but there are also hedges of roses, shrub hibiscus, hemlock, hornbeam, apple, pear, willow, yews, arborvitae and a range of other hedging material.

For the most part, the hedges are not only attractive, but they serve some very important and practical landscape functions in an area where folks demand at least some visual privacy. Hedges, particularly sheared ones (as in formal), require time and some knowledge to establish them and most require at least one to as many as three annual prunings. One thing that you don’t necessarily need, though, is lots of money as some hedging can grow 2 to 3 feet in a year and be started as single-stemmed transplants. It is important, however, to select suitable plant material that’s appropriate to the site in order to minimize upkeep as well as to prevent damage from deer, wind and salt spray.

Hedges are generally used to mark boundaries. Throughout New England it’s the infamous stone walls that mark property lines, but out here, where wall stones are few and far between, it’s the hedge that serves the same function. But hedges also delineate walks and drives, provide barriers to animals (as in deer) and people, serve as windbreaks and screen off undesirable views, sounds and neighbors.

The desired size of the hedge is determined by its function. For example, an 18-inch hedge can mark a boundary while a 7- or 8-foot hedge may be required to provide privacy. Even with sheered hedges, select material that has a mature height only slightly greater than desired. While most any plant can be used for hedging, select plants with fine to medium textured leaves. Coarser foliage plants such as viburnum can be used in informal hedges.

Informal hedges (nonsheared) reduce maintenance but may not be as viable a choice in every landscape. While suited to naturalistic designed landscapes, they are generally not attractive in highly manicured designs. There are places, though, where informal hedging is the only choice. You’ll see this along the barrier beach landscapes where exposure to constant wind and salt spray destroys most hedging except the rugged Rosa rugosa — and that’s what you see along Meadow Lane and Dune Road. You may also see privet used when it’s sheltered from the southerly and salty winds.

Evergreen hedges maintain their foliage all year and there are both pluses and minuses to this. The obvious attribute is that you have a continuous visual and sound barrier, but come snow and ice time the same foliage that is giving you that protection may become a detriment as it catches and holds ice and snow, causing branches to split and crowns to be shattered and crushed. Proper shaping can dramatically alleviate the structural damage from ice and snow, and planning can help by locating such hedges away from areas where snow will fall onto them from rooftops. Evergreen hedges can also be severely damaged by winter windburn. While the wind factor can’t be controlled, some protection in the form of anti-desiccant sprays and burlapped structures can help.

Then there are all those older homes that had wonderful hedges shaped from hemlocks. First, the deer discovered what a delicacy the hemlocks were, then the woolly adelgid (an insect) discovered how tasty they were, and during the 1980s and for the next 20-plus years this type of hedge was all but decimated.

But back to the simple deciduous hedge. We are obviously talking about privet, and for those with even deeper pockets, American hornbeams. For the do-it-yourselfer, privet can be purchased bare rooted through nurseries and catalogs from a foot tall to several feet tall, or it can be purchased bare root, in containers or balled and burlapped. One of the wonderful things about privet is that it grows quickly. Even from 2-foot sticks you can have a 6-foot hedge that’s dense and full in just about four years.

If you are less patient you can find a local privet grower who will sell you hedges by the linear foot. They have done all the growing and initial sheering for you so all that’s left is deciding what height you want to purchase and how long a hedge you want. The plants are dug and delivered bare root or B&B. The ideal time for this type of planting is in early spring just before the foliage has emerged and transplant shock is minimal. The hedgerow is planted just as it was in the nursery and with proper planting and watering you’re up and hedged in weeks instead of years.

Correct training and pruning during the establishment phase is critical if you are going to have a functional and attractive hedge. Hedges with insufficient base branches (density) as well as V-shaped ones are common. When dealing with any shorter hedging material, especially very short privets, cut back the plants to 6 to 8 inches above the soil line. This is done to develop a dense initial branching habit — the one that keeps out deer, neighbors and noise.

While a variety of shapes or forms is possible, it’s always advisable (but rarely practiced) to have the base of the hedge wider than the top. This allows the lower portion of the hedge to receive light and maintain density and also helps to shed snow loads in the winter instead of “catching” the load.

Narrow-leafed evergreens require less training and pruning than deciduous plants, but again, adequate density and correct form is essential for success. Junipers and yews can be pruned throughout the growing season, but hold back on late-season pruning as juvenile growth that may be stimulated in late summer may not harden off adequately by winter and die-back may result.

If you’re looking at an old hedge and wondering if it can be rejuvenated the answer is probably yes. So long as the hedge still has adequate live wood and basil branches, you can probably stimulate new branch growth. Do this by heading back the sides and top, 6 inches more than the desired finished size. This pruning will also remove the knotty growth that occurs from shearing at the same height and width each year. If the hedge is badly overgrown with few, if any, live branches near the base, replant. There are some plants that can be cut as low as 6 inches above the soil line and then reformed into hedge. These include forsythia, honeysuckle, spirea, lilac and hydrangea. But again, it’s too late this year for any drastic measures.

If you need a good reference on hedges that’s both inexpensive and chock-full of ideas, get a copy of Jeffrey Whitehead’s “How to Select, Plant and Grow a Living Fence” published by Storey Communications. It’s dated, but still quite relevant.

And by all means, keep growing.