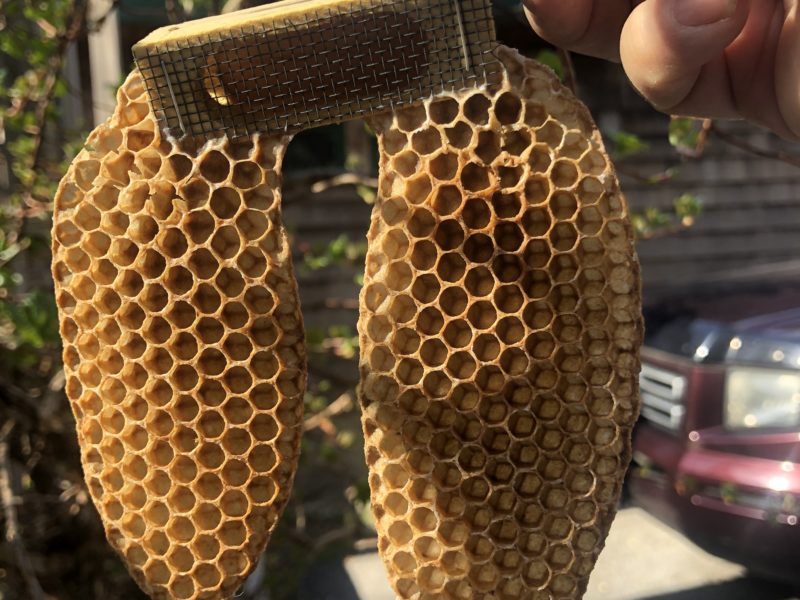 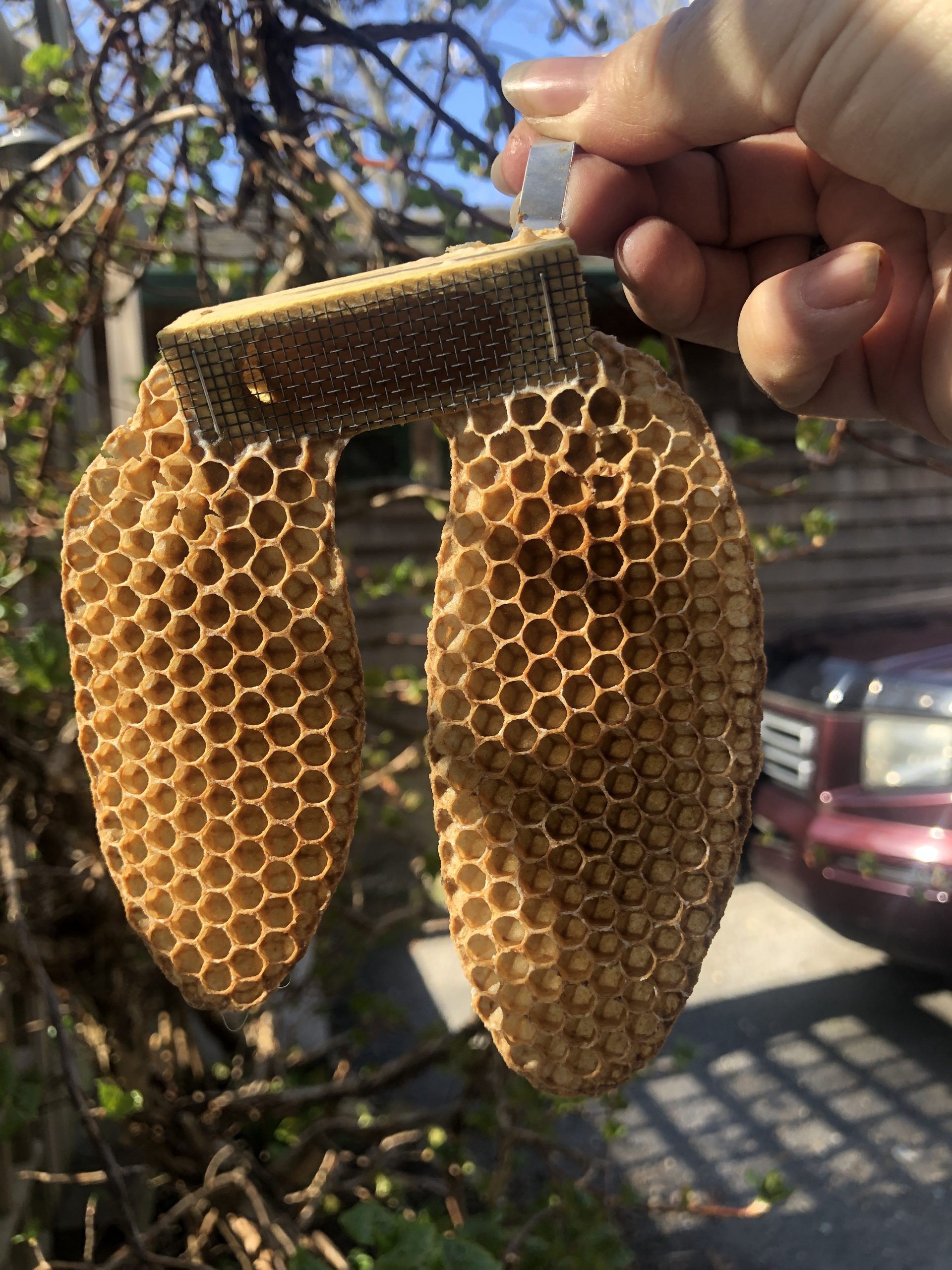 The queen cage, after three days in the hive. Workers have built blocks of comb off both ends. 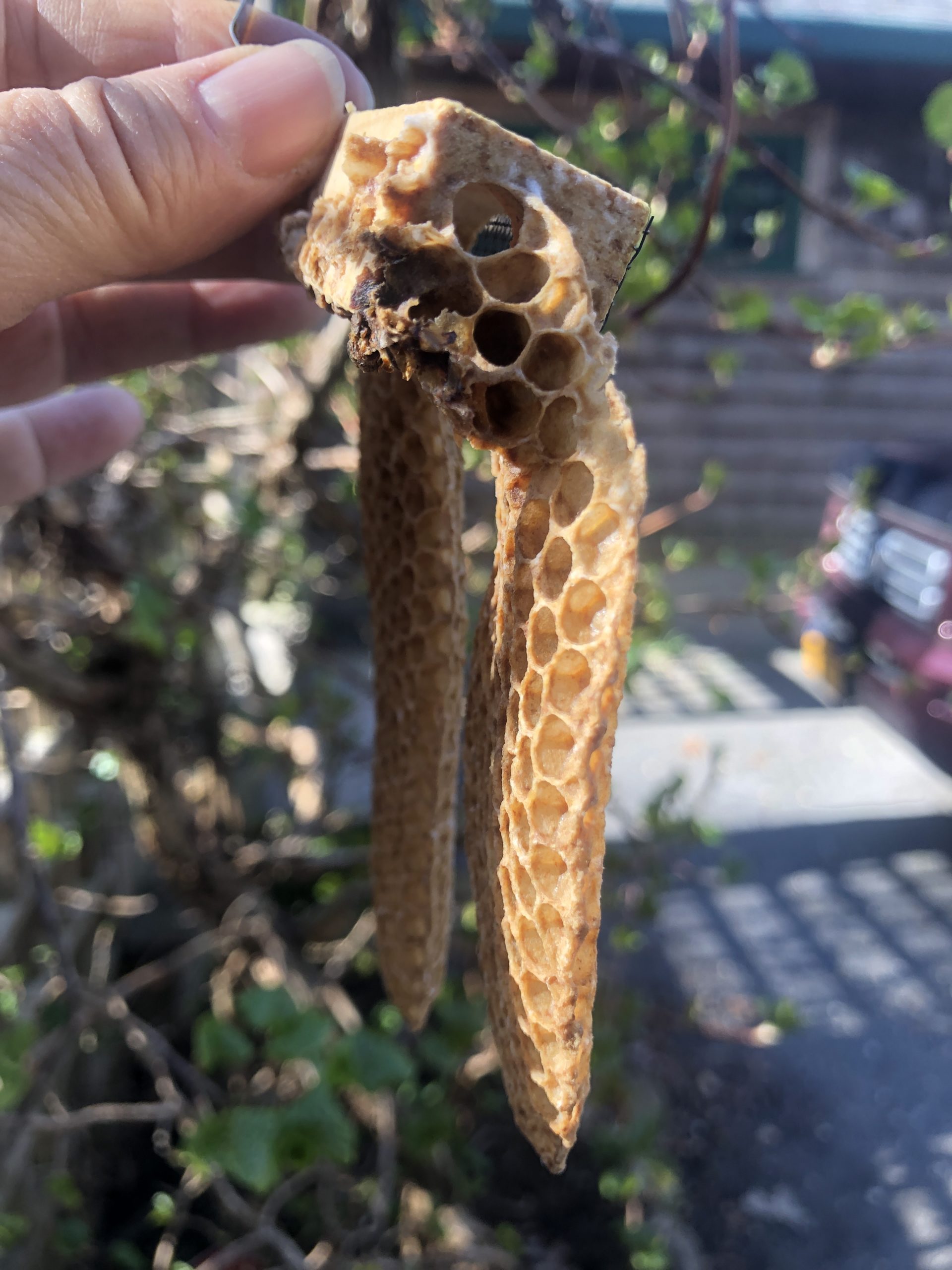 The comb seems to have been constructed to provide the queen with an easy pathway out of the queen cage and into the main hive body. LISA DAFFY

Well, I’ve embarked on another season of beekeeping, and so far, so good. All three hives that we had last fall made it through this miserably long winter. Not only did they survive, but they burst out of their dark confinement on the first warm day in March and celebrated, as they do, by pooping joyously all over my car.

My son, Michael, a true motorhead who keeps his car pristine, says he hates my bees precisely because of their generosity in sharing this spring poop celebration with him as well. But I find those bright orange and yellow dots a happy assurance that spring has sprung and all is well in the hives.

But enough about bee poop.

We did have to replace one colony that absconded late last summer. I’m not sure what we did to offend them, but my very best colony — a good 60,000 bees probably — just up and left. This is not the same as the dreaded colony collapse disorder you may have heard of. Colony collapse leaves a few bees, and the queen, roaming around in an empty hive with no workers to forage for food or tend to the many other tasks that need doing to keep things chugging along. A collapsed colony is a dead colony.

When a colony absconds, it’s usually because the current living accommodations just aren’t working out. In this case, I suspect the culprit was varroa destructor mites, lovely little tick-like creatures that attach themselves to honeybees and literally suck the life out of them. And if that’s not enough, they also lay their eggs alongside developing bee larvae, so their young can grow up feeding on the bees before they even get to actually become bees. These are not nice creatures, and a hive infested with them will go to extreme measures to leave them behind.

I had treated the hive for mites, successfully, or so I thought. But maybe not, because who knows? At this point I’ve given up pretending I understand why bees do what they do. Maybe they found better digs on bee-Zillow.

Anyway, I picked up a new package of bees and installed them in the now-empty hive. A package consists of three pounds of worker bees and a young mated queen, contained in a plastic or wooden box with screened sides. A can of sugar water with a tiny hole in it keeps the bees fed en route.

The queen is separated from the workers, held inside the package in a small wooden box with a hole on one end that’s plugged with a wood stopper. One or two workers from her hive may be caged in with the queen to look after her, along with a piece of “queen candy,” a putty-like mix of confectioner’s sugar and honey for her to snack on.

Because the queen and the workers in a package almost always come from different hives, the queen must be separated from the workers for the trip. Her pheromones are unfamiliar to them, and there’s a good chance they would see her as an intruder and kill her if they had access to her.

Once the bees arrived, I followed the instructions for installing them into the waiting empty hive — gave the package a good whack to shake the bees off the feeder can and down to the bottom of the container, removed the can, then removed the little queen cage and covered the opening in the package to keep the bees contained for a few more minutes.

The next step is critical. I removed the wood plug on one end of the queen cage and replaced it with a chunk of marshmallow, stuffed tightly into the hole. Then I placed the queen cage between two frames in the center of the hive box, making sure not to block access to the marshmallow plug.

With the queen secured in her new home, I upended the package of bees over the hive box, shaking the girls into their new home. There are always some troublemakers who refuse to leave the package or decide to take a joyride around the yard instead of settling in right away, but the colony’s bond wins out in the end and all of them found their way into the hive within 20 minutes or so. At that point, I put the cover back on the hive, and left nature to take its course.

Over the next couple of days, the queen’s pheromones spread through the hive and the workers grew accustomed to her. They gradually chewed their way through the marshmallow plug, so that by the time they freed her, they had accepted her as their queen. For the beekeeper, the final task of installing a package is to wait three days and check to see if the queen has been freed from her cage.

When I lifted up the inner cover and peeked inside, I was delighted to see that not only had my new bees freed their queen, they had made her either a lovely pair of wax earrings or a walkway out of the cage on which to stage her grand entrance.

Either way, it seems like a fine way for a queen to start her new reign.