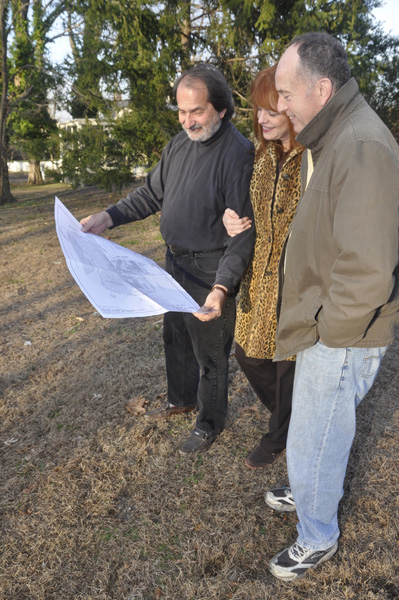 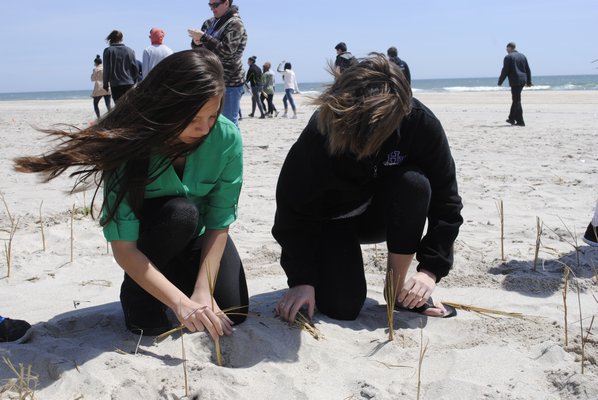 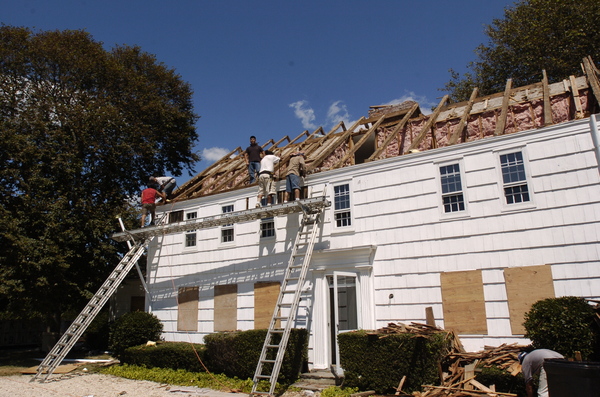 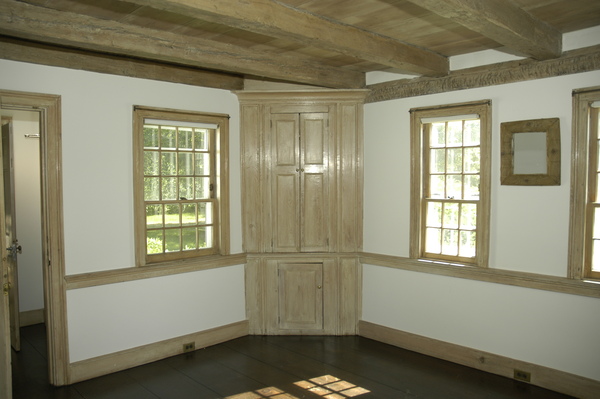 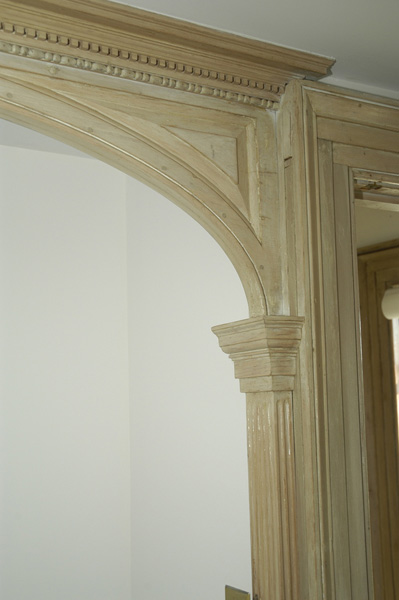 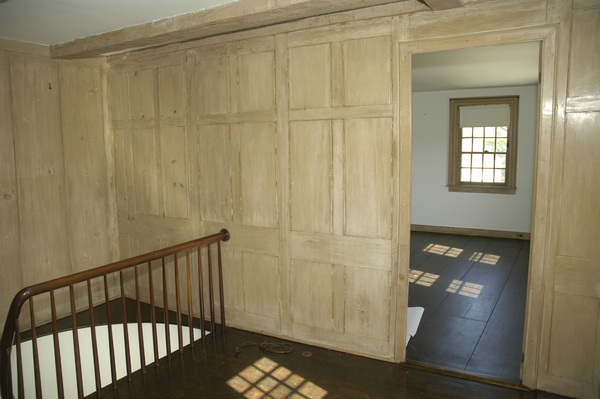 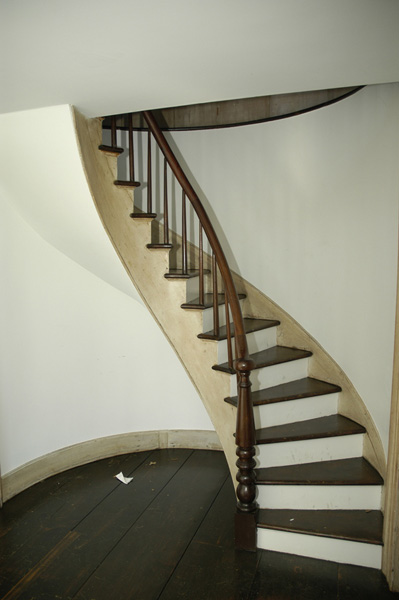 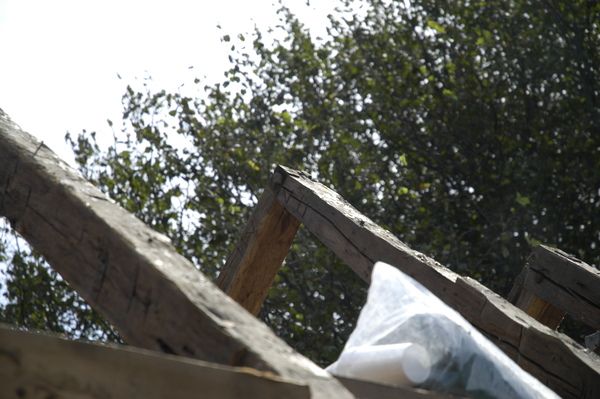 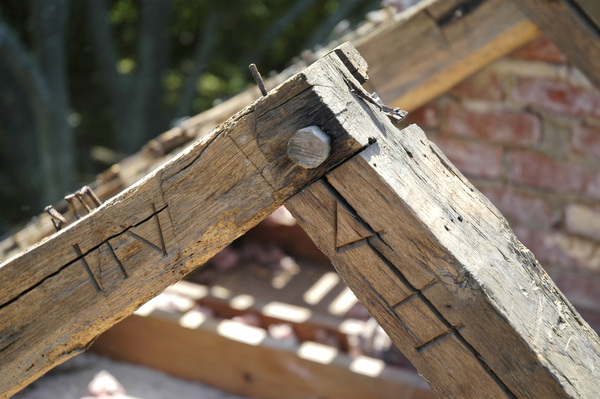 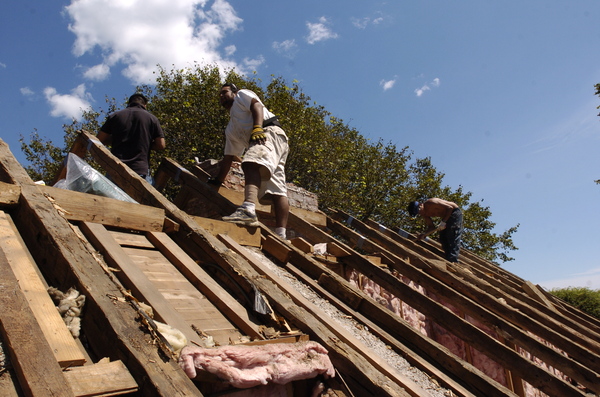 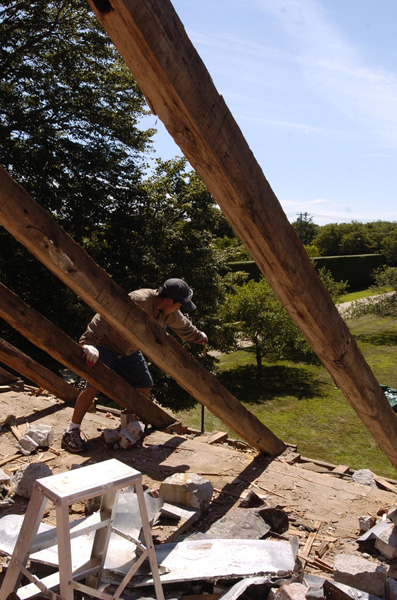 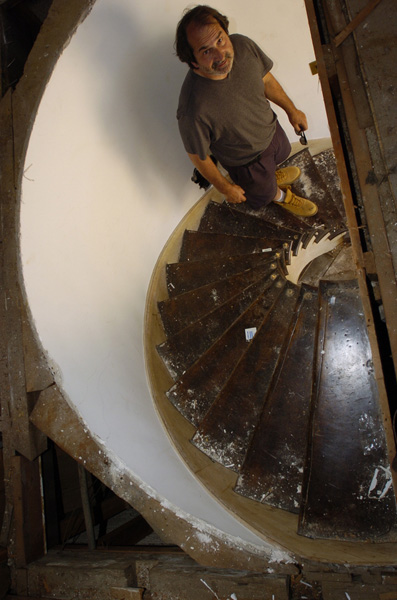 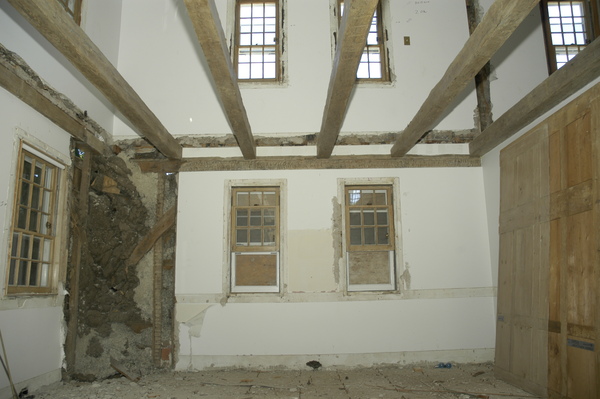 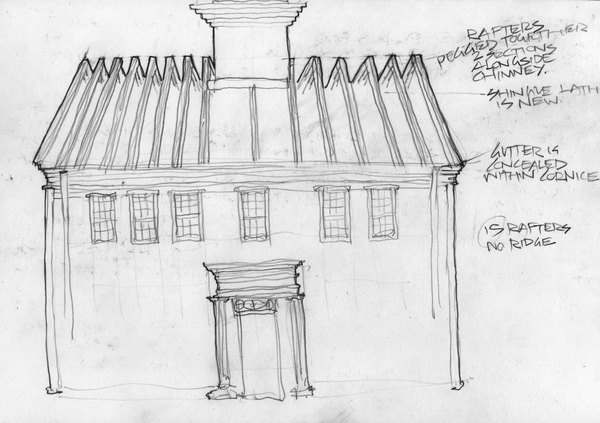 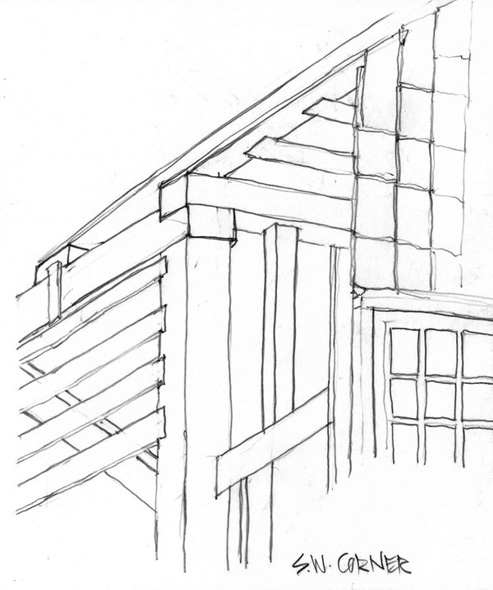 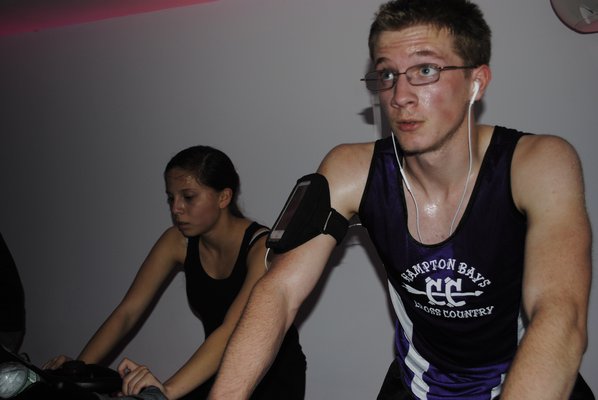 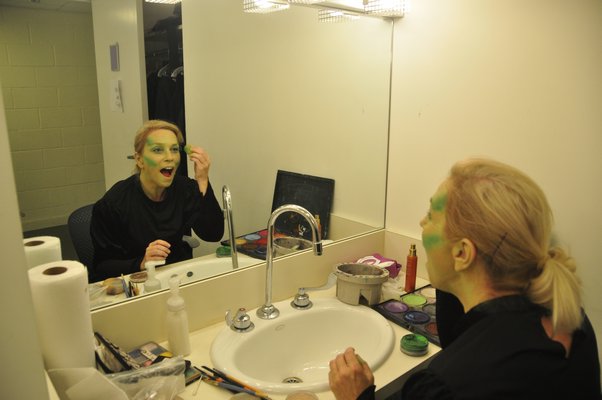 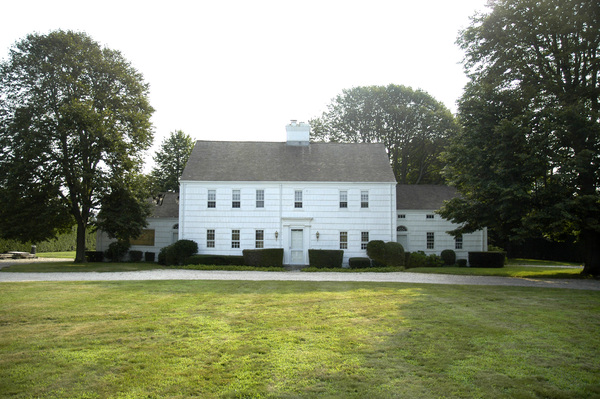 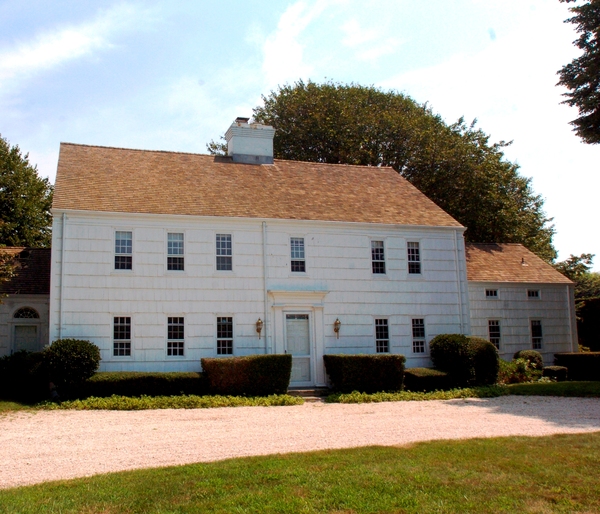 The year was 2006. East Hampton architect Robert Strada and his wife, artist Michelle Murphy, were in the throes of preserving and restoring the Henry Rhodes House in Southampton Village in July when they received a phone call from local historian Zach Studenroth.

“We have to meet. We have to talk,” Mr. Studenroth had said, Mr. Strada recalled during a recent interview.

The couple soon learned that there was another house in the village that needed saving. A buyer had purchased the 444 Little Plains Road estate, home to a circa 1740 Colonial-style house originally built in Connecticut and moved to the East End sometime in the 1900s. The new purchaser had also secured a permit to knock it down, despite the fact that the home had been exquisitely preserved by its previous owner, Andrew Rolfe.

By a stroke of bad luck, the house sat just feet and inches from the village’s historic district. It was simply on the wrong side of the double yellow line, and the buyer wanted to build a McMansion. He didn’t show regard for this house’s past, Mr. Strada said, and the architect, whose passion is preserving properties, couldn’t ignore it.

According to Mr. Strada, the house was moved sometime during the early 20th century from Connecticut to Sag Harbor, where it remained for several years until a member of the Dixon family—wealthy Texans who had property in Southampton—saw the house.

Ms. Dixon fell in love with the building—its barrel-back cupboards, wide, dark-stained floors and oak floor-to-ceiling paneling. And because her husband loved his wife, Mr. Dixon moved the house to Southampton Village as the family’s new home.

In 2006, the house faced imminent destruction, Mr. Studenroth told Mr. Strada. At the historian’s urging, Mr. Strada and Ms. Murphy joined a committee of seven, including the two of them, dedicated to rescuing the building from its fate.

“We were comfortable believing that between this group of five people, one of them would save this building, and we went home,” Mr. Strada said. “We were really busy with the Henry Rhodes House. Two days later, we get a phone call saying, ‘It’s you or nobody.’”

It was now August—one of the most blistering Augusts the couple said they could recall—and after intense negotiations with the new owner, they were given 30 days to save the house.

The house was completely dismantled again, from the top down, in 12 sections. First, the roof came off. Then, the second-floor walls were dropped. Finally, the framing was taken apart, piece by piece, numbered, tagged and stored in two temporary structures on the couple’s Amagansett property. They fronted the entire $100,000 it took to deconstruct, move and store the house.

During the process, Mr. Strada keyed every individual piece, which totalled more than 1,000 items, to architectural sketches that could eventually become a complete set of plans. He envisioned that, someday, new owners would come along and put it back together again.

Nearly six years later, that day has come, thanks to a simple newspaper advertisement placed by Mr. Strada in The Sag Harbor Express about the house in mid-September.

The call came from Joe Pintauro and Greg Therriault—friends of Mr. Strada and Ms. Murphy for 20-plus years. Mr. Pintauro and Mr. Therriault have owned a vacant parcel of land looking across Love Pond on John Street in Sag Harbor for more than two decades and had been unsure of what to do with it. That is, until they stumbled across the ad.

“It was one of those ‘Aha’ moments, you know?” Mr. Strada said of the call, laughing. “It’s as if you’re being shown the answer and your response is, ‘Well, of course. That’s what I’m supposed to do with this house.’”

“All kidding aside, this is why it’s taken us so long to find the right project—because we were waiting for this project,” Mr. Therriault added. “Because it had to be. That’s why all of the other things didn’t happen. So this could happen. And everyone we’ve presented this project to feels the same. Our attorney, who can be somewhat jaded about real estate matters, even became excited.”

Since they’d hoped to develop the land for many years, Mr. Therriault and Mr. Pintauro had already secured all the necessary permits to construct a house, except for approval needed from the Sag Harbor Village Historic Preservation and Architectural Review Board for this particular home, as well as the building permits Mr. Strada will need down the road.

But the architect does not foresee any complications, he said, and hopes to begin the 12- to 14-month construction this year.

“One of the ARB members called it a ‘gift to the community,’” Mr. Strada said. “Another called it ‘kismet.’ This is American history we’re talking about. You can read about it, but here, you are living in it. You’re in it. You sure are going to save it.

“That’s what we do out here,” Mr. Strada continued. “That’s why the East End looks the way it does and feels the way it does. It’s because of this historic fabric—woven between houses and between people, like us.”

The friendship between the couples dates back decades, Ms. Murphy said. In 1979, she and her husband left Greenwich Village behind and moved into an old Amagansett farmhouse. They lived in “blissful anonymity” for several years, she said, until they decided they wanted a social life.

So they began hanging out at Canio’s Cultural Cafe in Sag Harbor.

“We met this little crowd of people, including Joe and Greg,” Ms. Murphy recalled. “It was almost like a West Village scene, a hangover from the ’60s in there. It was very bohemian and funky. We had this instant, fabulous rapport. And we would hang out all the time.”

They soon became more than acquaintances. Mr. Strada and Ms. Murphy frequently visited their new friends at their home on John Street, which sits adjacent to the vacant parcel owned by the couple.

“It’s a very magical kind of street, filled with extremely accomplished and creative people,” Ms. Murphy said. “It is kind of a hidden secret in the Hamptons. It’s incredibly special.”

And it’s just the place for an 18th-century gem, Mr. Pintauro said.

“I am totally romantic about Sag Harbor, and we are romantic about houses—old houses,” he said. “We feel there is no place for that house. It has gone through so much. But it will find a home here on Love Pond. People think it’s a made-up thing, Love Pond, but it’s not.”

“And there’s one thing that Robert told me that I’ll never forget,” Mr. Pintauro continued. “That the house was saved because of a husband’s love for his wife. Isn’t that just wonderful.”

Coincidently, the home, which was almost knocked down to make room for a new manse, will sit on 59 John Street—the last number on the road inside Sag Harbor Village’s historic district.

“It will be safe forever.” Mr. Strada said. “No one will ever be able to touch it.”

Simultaneously, the two couples let out a collective sigh of relief, caught themselves and chuckled.

Maine Horticulturist Presents The Beautiful Native Plants Of The Northeast

Exotics and carefully bred cultivars are typically the plants of choice to add color and ... by Brendan J. Oâ€™Reilly

Labor Day weekend is finally upon us. Despite the title of this column, squarely centering ... by Andrew Bowen