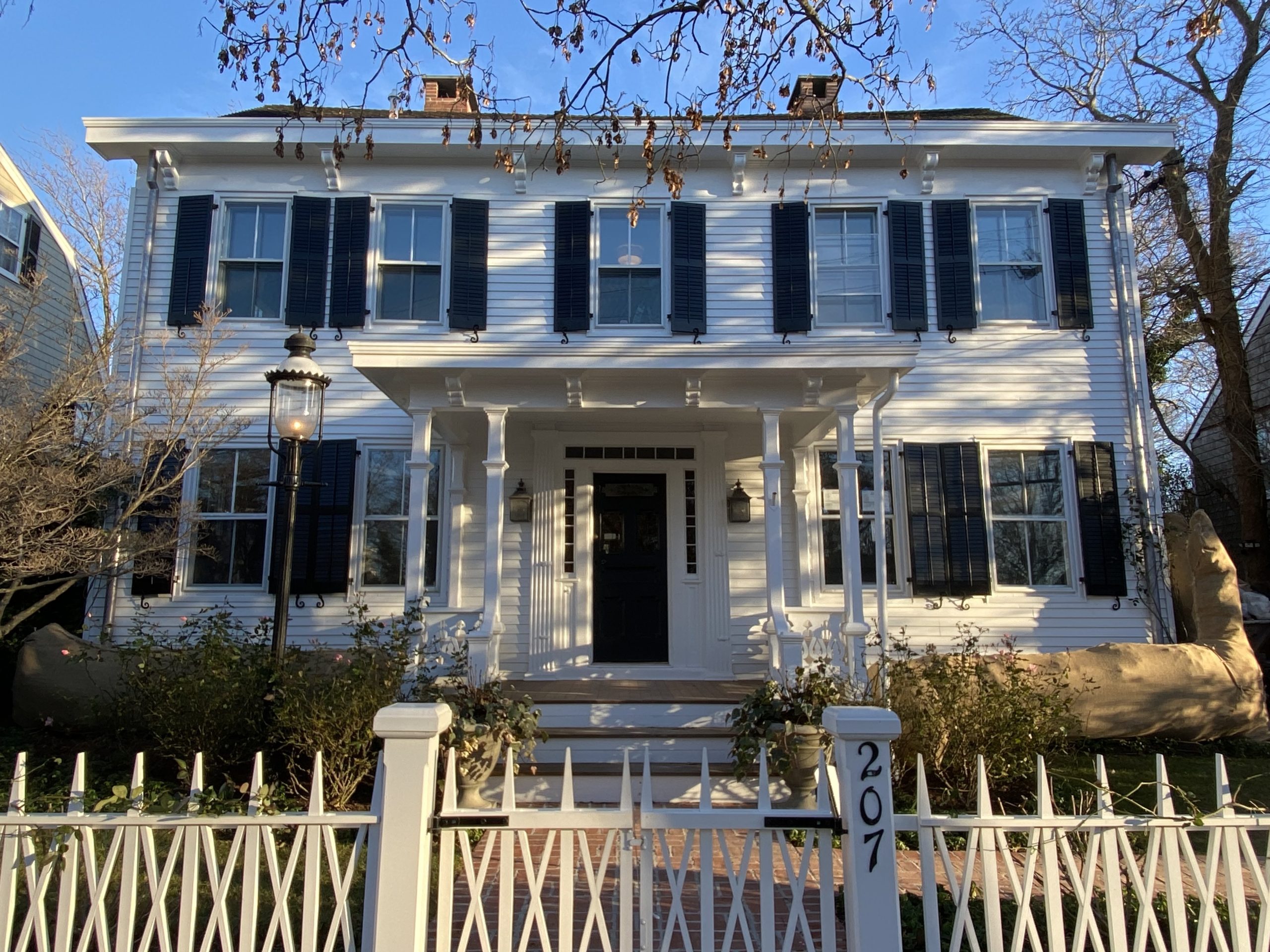 The late 18th-century house at 207 Main Street in Sag Harbor, the old 2-over-2 windows of which are a point of conflict in a case before the vilage’s Historic Preservation and Architectural Review Board. Peter Boody photo 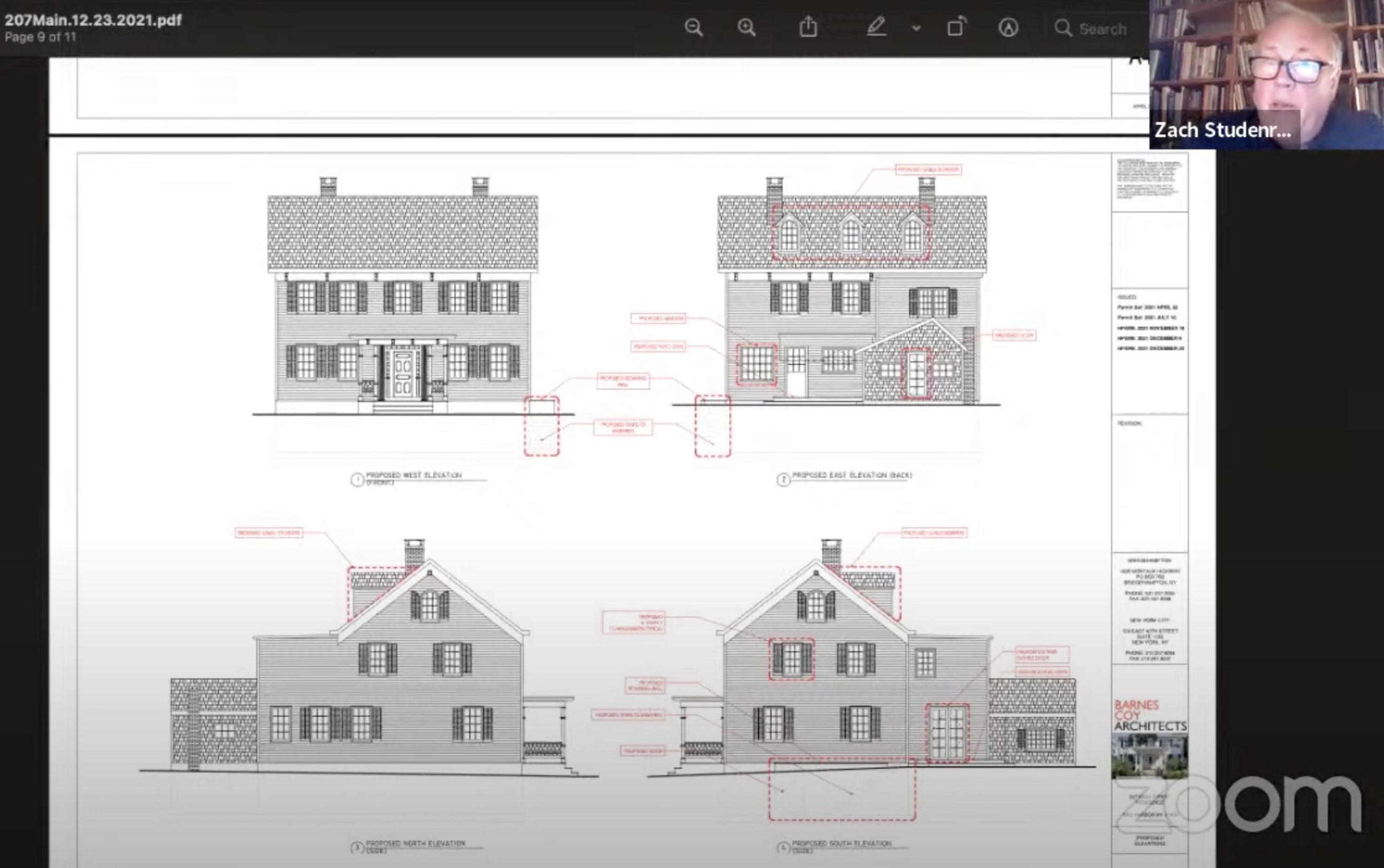 Architect Christopher Coy’s elevation of 207 Main Street with 6-over-6 window sashes in a screen shot from the December 23 Zoom meeting of the Sag Harbor Historic Preservation and Architectural Review Board. The inset shows Zachary Studenroth, the board’s historic architectural consultant. 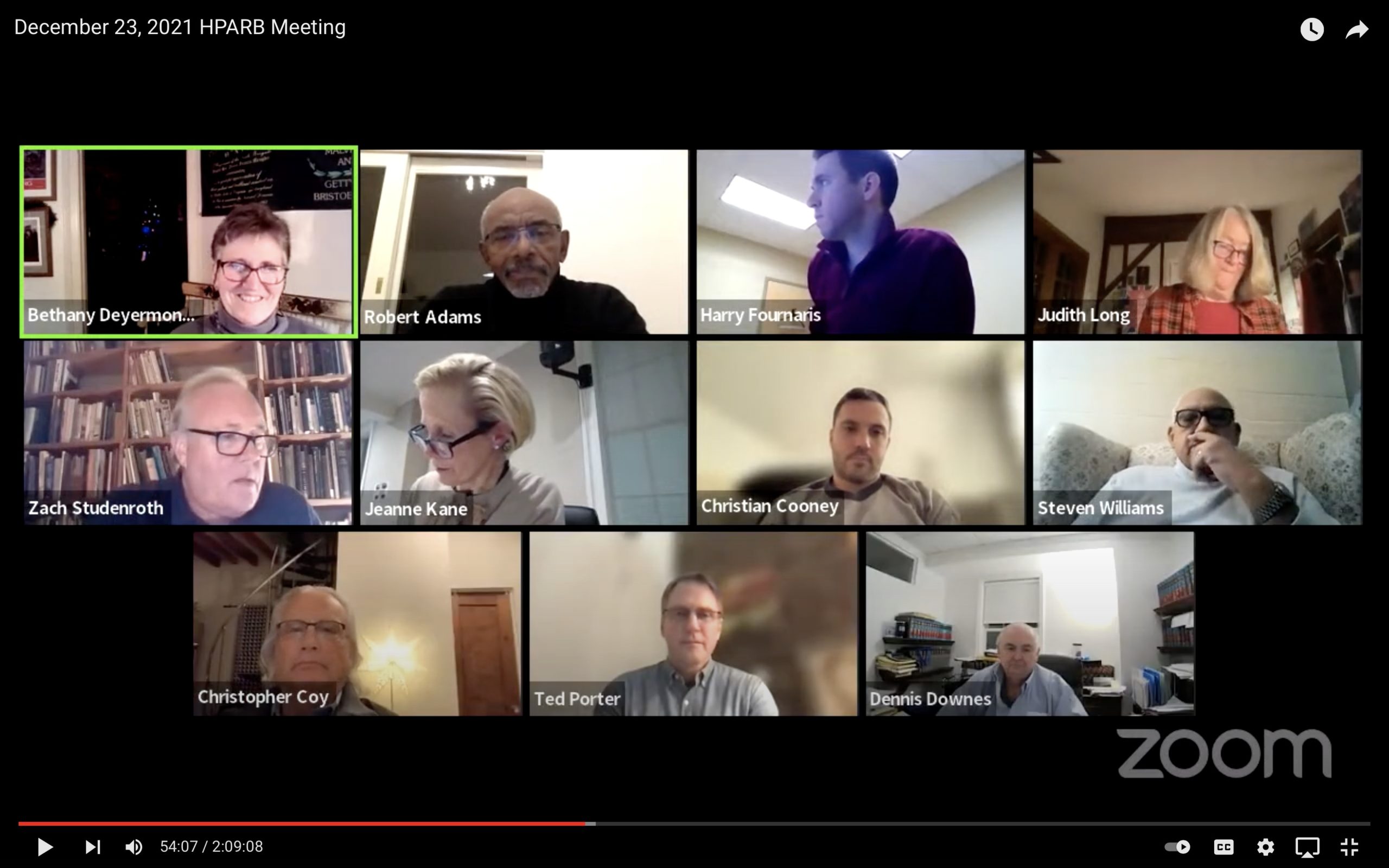 There is nothing simple about upgrading worn-out windows in a classic old house in the nationally designated Sag Harbor Historic District.

Newly revised plans to replace the old, drafty, 2-over-2 windows in the late 18th-century house at 207 Main Street with custom-made, 6-over-6 thermal sashes did not stop the blast of chilly air that architect Christopher Coy has faced from the Sag Harbor Historic Preservation and Architectural Review Board (HPARB).

Based on his discussion with the panel at its Zoom meeting on December 9, when he got a very cool response to his plan to replace the late 19th-century, Victorian-era windows with custom-made, thermally-efficient, 2-over-2 replicas, Coy changed course: At the board’s next meeting on December 23, he unveiled new plans to use custom-made, 6-over-6 sashes, much like the old window a previous owner said he had found in the basement.

They did no better warming up the board, which remained fixed on the principle that federal Historic District rules require saving original architectural elements unless they are unsalvageable. In that case, they should be replaced only with historically appropriate features.

“I don’t know that we’ve quite arrived at a happy ending here,” said Zachary Studenroth, the board’s historic architectural consultant, “because 6-over-6 sashes are rather typical of a later period, the Greek Revival Period,” rather than the building’s original Federal style.

The house was renovated to its present appearance sometime in the 19th century. The 2-over-2 windows went in later — perhaps in the 1870s, Studenroth has said.

When the previous owner, local attorney Dennis Downs, revealed at the December 9 meeting that he had found an old 12-over-12 window in the basement, Studenroth had said it might allow for what he called a “compromise,” justifying the use of modern replicas.

It was only later in the that meeting, long after the discussion with Coy about 207 Main Street had ended, that Downes told the board he had made a mistake: The old window he had found was a 6-over-6.

“If we can’t substantiate it was 12-over-12,” Studenroth explained on December 23, after Coy had shown new elevations of the house with 6-over-6 windows, “I think we’ve lost the argument for replacing them all” with modern replicas instead of finding a way to preserve the existing 2-over-2 sashes, he said.

Coy protested that there are many old houses with 6-over-6 sashes all around Sag Harbor, including in the immediate neighborhood — among them his own circa-1810 Federal house.

“These are not Federal-style houses,” Studenroth said. “They are Greek Revival houses dating from about 1840 onward,” agreeing that 6-over-6 sashes were a common feature among them.

But “the argument to support replacing 2-over-2s in this particular house with something else was based on the fact that the ‘something else’ was unusual and notable for being indicative of the construction period of the house, which is presumed to be late 18th century and, therefore, very likely to be 12-over-12s,” Studenroth said. Using 6-over-6 sashes “brings it into conformity with virtually every other [old] house in the village,” he added, so it would be “no longer especially noteworthy.”

The HPARB “over the years,” he added, “has created a policy that encourages homeowners to preserve their window sashes because often these are original or of historic interest.”

Coy noted that Studenroth himself acknowledged that the 2-over-2 windows are not original to the building. “We’re trying to replace them with what’s original,” Coy said.

He added that the HPARB “is a board of preservation” — and it’s not style that is to be preserved, “but the actual physical fabric” of the original structure. To now replace the sashes “with a different style … that’s not getting it to be more original; that’s just making it look the way it might have,” he said.

“I’m confused,” Coy said. “I thought you were objecting to the [modern replica] 2-over-2s because they are not Federal.”

“Not at all,” Studenroth said. “The only argument for replacing them would be if something were deemed to be preferable,” such as “restoring the house to its original appearance. That might justify it. But just replacing them with 6-over-6s is not accomplishing that goal.”

That took the matter back to where it started on December 9, when Coy initially proposed replacing the 2-over-2 sashes with modern replicas and Studenroth and the board resisted. “Can we replace the 2-over-2s?” he asked, adding that “it has to be done” because “they are shot.”

HPARB Chair Jeanne Kane said the board had to decide “if we’re at a point these windows cannot be restored” and, if that’s the case, whether their modern replicas should be 2-over-2s “or we go to 6-over-6 to match” the windows in a rear shed and the original kitchen, which Downs told the board are 6-over-6.

No matter what the pattern, Board Member Judith Long said she was “concerned” about setting a precedent. “I’m afraid that every other homeowner of an historic house is going to come in and demand ‘thermopane’ windows,” she said.

Board Member Steve Williams, who on December 9 first objected to the new 2-over-2 windows — citing the rules promulgated for National Historic Districts by the U.S. Secretary of the Interior — noted during the December 23 discussion that the board has “asked others to rebuild in the historic fashion, which is of course single pane,” not insulated double-pane.

Coy countered that the rules allow for a “like kind insulated window with approval” if the originals are “no longer serviceable.”

“This is all we’re trying to do,” he added. “Dennis [Downes, when he owned the house] rebuilt” the windows and “it didn’t do much good.”

“We had wells in the basement” in old houses, Coy continued, “but you put in a modern water system. We used to heat with fireplaces. Now we connect to street gas. All roofs had to be replaced at some point … The issue here is the replacement has to be historically correct …”

Every window on the west side of the house “leaks air into the house,” commented Downes.

“That’s what storm windows are for,” replied Studenroth.

When Coy asked if the board members wanted to see the house and its leaky windows in person, Kane agreed that should be a “next step.” Long said that she also would like to see a sample of the proposed replacement window; Kane added she wanted to see photos proving that ice forms on the inside of the windows when cold weather sets in.

“Right now, the historical record of the house is defined as 2-over-2,” Kane concluded just before asking for a motion to table the case until the next meeting on January 13. “Maybe that is going to be the resolution of how we will go unless we have proof it really was 6-over-6,” which has to be in the form of “documentation.”